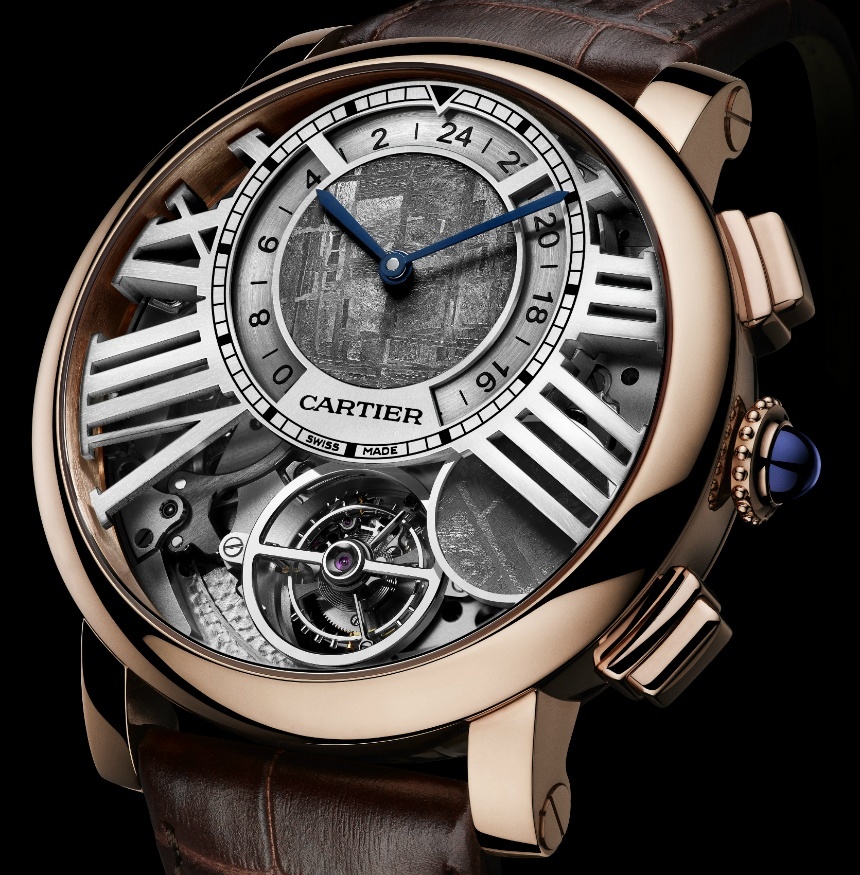 Cartier is one of those very few luxury Swiss watch brands that, for an extended period of time, has maintained both an extremely strong array of main collection offerings and a genuinely sophisticated, unique, and diverse line of haute horlogerie ultra high-end pieces. That arguably puts a lot of pressure on the company and Cartier’s head of movement creation department Carole Forestier-Kasapi, as each year, they must up the ante and surprise the world with complicated “high mechanics” and stunning “high jewelry” watches. Let’s see six new high-complication watches that Cartier freshly developed or modified and will officially debut at SIHH 2016 in Geneva, Switzerland, in January. The Cartier Rotonde de Cartier Earth and Moon watch was originally released at SIHH 2014 with a stunning lapis lazuli blue stone dial. The Earth and Moon is a prime example of Cartier’s approach to high watchmaking: when it comes to its most technically complex and function-packed pieces, for Cartier, there usually has to be a blend of traditional complications and design elements, creative new twists on some other traditional features, and last but not least, some genuinely useful indications. First, the in-house developed and manufactured Calibre 9440 MC movement packs a tourbillon – ticking the box of traditional complications. The movement is a massive 40mm wide, but only 5.65mm thick, and comprises 362 individual parts. Second – and here comes the twist on a historical feature – the watch displays the phase of the Moon on a meteorite stone disc that, with the pusher at four o’clock, can be moved right over the six o’clock position to cover up the tourbillon underneath it. By another press of the button, the disc will move in a way that its position corresponds with the phase of the Moon.

The Earth, meanwhile, is represented by the sub-dial in the upper center of the face of the watch. Also crafted from meteorite, it displays the hours and minutes with two blued steel hands pointing to the large, skeletonized Roman numerals on the periphery of the dial. Around the sub-dial is a 24-hour indication disc that can be adjusted individually with the pusher at 2 – bringing a genuinely useful indication into the picture. All three boxes are ticked: tourbillon, proprietary Moon phase display, 24-hour indication… All set inside a large, 47mm-wide and 16.65mm-thick pink gold case, limited to just 15 numbered pieces. Price for the Cartier Rotonde de Cartier Earth and Moon watch in pink gold is $235,000.

The Cartier Clé de Cartier originally premiered at SIHH 2015 (see our hands-on with the main collection pieces here), and since then, the collection has already seen the addition of a mysterious hour complication at Watches & Wonders in Hong Kong (hands-on here). While thus far, this latter iteration is probably my favorite Cartier watch design ever, the Cartier Clé de Cartier Automatic Skeleton also appears to be a stunner. With its 41mm-wide and 11.45mm-thick palladium case, the key design elements of the Clé – including the “key-like” rectangular crown – are very much present, while the dial and in fact the movement itself have been skeletonized in typical Cartier fashion.

Here, the interesting bit – and in fact a quite impressive engineering achievement – is that the Cartier 9621 MC actually is the maison‘s first skeleton movement with automatic winding – which we are sure will be a lot of fun to see in the metal. Cartier say its engineers put a lot of effort into making their latest achievement, the addition of an automatic winding rotor, as invisible as possible. As such, the rotor has been skeletonized in a way that it only has two central spokes and an extremely thin periphery, with the rest of it, well, pretty much gone. This was done so as to expose as much of the movement as possible, and not cover it up with a large, solid 22k gold rotor.

The dial features large, skeletonized Roman numerals at 3, 6, 9 and 12, with spokes for the other indices present as well, certainly helping with legibility. The 9621 MC movement may look relatively simple at first sight – at 5.66mm thick and with only 165 parts total – but upon closer inspection, it proves to be an ingenious design where the movement serves to carry not only its own components, but also to act as a meticulously crafted and rather legible dial. Really looking forward to seeing this hands-on at SIHH 2016. Price for the Cartier Clé de Cartier Automatic Skeleton is $61,000. The Cartier Crash Skeleton also made its debut at SIHH 2015 in a solid platinum case, and we went hands-on with it here. The story of the Crash is genuinely unique and fascinating, if not a bit creepy, and you can read more about it in the hands-on article. Cartier, in its SIHH 2016 communications finally mentions a bit of the story, which is great, as previously it had never really addressed it openly – at least, not that we know of – since the Crash originally made its re-debut in 2012 as a ladies’ watch. What makes the Cartier Crash Skeleton really unique, though, is not just the history of its origins but also its stunning movement. If anything, the in-house 9618 MC caliber is even more impressive than the one inside the Clé discussed above because the one in the Crash had to have this extremely weird, melted shape to follow the shape of the case. Furthermore, the movement is curved lengthwise, which makes all components, plates, and bridges even more difficult to engineer. The Cartier Rotonde de Cartier Day / Night Retrograde Moon Phases is a piece that may be familiar to those who have been following Cartier’s ventures into haute horlogerie for some time now. Originally called the Cartier Rotonde Jour et Nuit (“Day and Night” in French), it was a stunning watch that had a central minute hand but used a large, semi-exposed disc to indicate the hours – do not mistake the central hand for a retrograde hour hand. The disc below features a pointed ray coming from the Sun to show the hours on the scale and as the AM/PM indicator turns into night, the Moon has a shining star above it to mark the hours. In the upper half of the dial, Roman numeral indices for 6-8-10-12-2-4-6 are placed with diamonds for the odd numbers on the hour scale. The rhodium finished 18k white gold dial is set with 118 brilliant cut diamonds and with 28 blue sapphires – and despite all this, remains quite legible. The other center-mounted hand is the retrograde Moon phase indicator which makes for a neat use of the lower segment of the dial. The movement inside is the 9912 MC in-house caliber, with 290 parts and 48 hours of power reserve recharged by automatic winding. Price for the Cartier Rotonde de Cartier Day / Night Retrograde Moon Phases is $94,000.