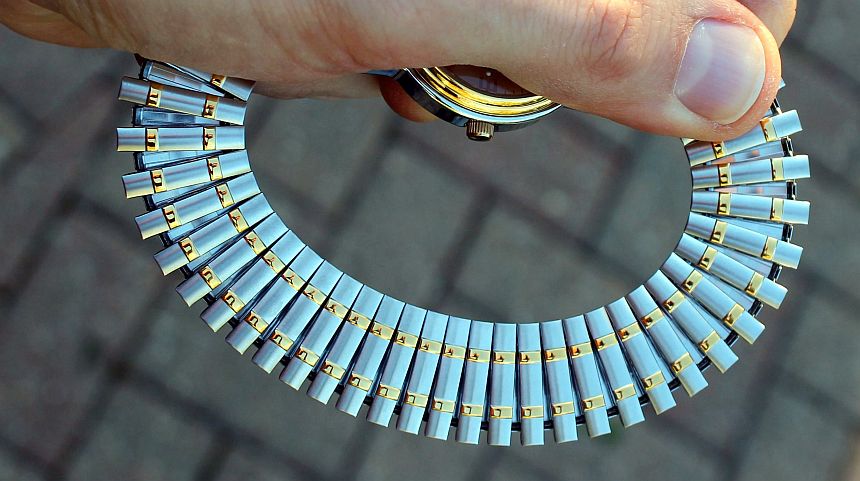 Speidel is the name behind what was once an iconic element of wrist watches, especially in America. You may not know the Speidel name or the name of the product they produced, but everyone should remember those flexible metal bracelets that were once so popular. Called “Twist-O-Flex” Speidel flexible bracelets could be found everywhere, and the company behind them has been in continuous operation for over 100 years. Let’s take a look at the company that brought us Speidel bracelets and see what they are up today. Surprisingly, Speidel is not only still around and thriving, but they still make Twist-O-Flex bracelets along with some watches. Below we even have an interview with one of the co-owners, Ms. Lynn-Marie Cerce and a mini watch review.

Before we get into that, though, we need to dive into the bracelet that really is what most of us know Speidel for; the Twist-o-Flex. They introduced the flexible bracelet in 1959, when they had licensed it from it’s inventor, Karl E. Stiegele. It ended up becoming such an important part of their brand identity that Speidel’s logo became a Twist-o-Flex tied into a bow. The men’s model was quickly followed by a women’s bracelet (in 1961), as well as a children’s one (1963). Part of their popularity no doubt came from their early advertising position – Speidel was one of the first brands that started advertising on television (in fact, they ended up eliminating their radio budget early on, concentrating solely on the new medium). Also, I can only imagine that the bracelet offered a bit of a break from the norm of what was out there, in terms of existing bracelets on the market. Not to mention, once you’ve got the bracelet adjusted properly, it should be comfortable on just about any wrist.

And think about it – you’ve probably noticed your own watch fitting differently at different times of the day, or perhaps in different seasons. An expansion bracelet like the Twist-o-Flex is able to accommodate those fluctuations without any problem. Or, what if you want to strap your watch over a sleeve, say, outside of your coat? Unless you have an extender on your strap, that’s likely going to be difficult. Expansion, though? No problem (within reason, of course).

So why have they fallen out of favor as of late? That’s likely due to a few different reasons. For starters, they are notoriously difficult to adjust. You have to unbend tabs in the right places (without breaking them), and then reassemble it just so. Not something most people would be comfortable doing. Next, while they are comfortable, many people complain of the expansion links catching, snagging, and pulling arm hairs – which isn’t the most pleasant feeling, as you may imagine.

Next, it comes down to quality (real and perceived). While Speidel is one of the big names for expansion bracelets, there are no shortage of brands who have made them over the years, to varying levels of quality. Some of this might be reflected in unsmooth expansion, or finishes (such as gold tone) flaking off quickly. Finally, it boils down to style. When it comes to the styles of watches that are popular today, many may not look quite right on an expansion bracelet – when it comes to metal, we seem to prefer something that’s specifically made to fit to our watch cases.

With that, you have a very quick overview of the Speidel Twist-o-Flex, it’s ascendancy in popularity, and some reasons why it’s waned in recent years. With that bit of history under our belts, let’s move on to our interview with Lynn-Marie Cerce: aBlogtoWatch (ABTW): Can you describe the history of the brand?

Lynn-Marie Cerce (LMC): Since 1904, iconic American brand Speidel has been renowned for innovative designs, operational excellence, and passion for customer service. We are the number one recognized brand in the world for watchbands and identification bracelets, and offer a wide variety of products including our signature “Twist-O-Flex®” watchband, Speidel Identification Bracelets (Speidel ID’s®, My First ID®) and Medical Alert bracelets (Medilog®), as well as beautifully crafted traditional and contemporary timepieces.

The Speidel company can be traced back to 1867, when it was founded in Germany by Fredrich Speidel, and has been a household name in the US since we were launched here 109 years ago. Speidel products can be found at both independent jewelers and well-known mass retailers across the U.S.

Speidel has been headquartered in Rhode Island for over 100 years and we have a long and rich history of commitment to the communities we serve. In fact, Governor Lincoln Chafee declared January 2013 as “Speidel “Change A Band, Change A Life™” Month” throughout the state of Rhode Island to honor our support of America’s troops, veterans and their families. ABTW: When were the Twist-O-Flex® and ID® bracelets introduced and when they hit peak popularity?

Speidel began manufacturing ID bracelets in 1951 during the Korean War – the first product was the Photo Ident (shown on the right) – a combination bracelet with a photo and expandable wristband, which was advertised on television and became an immediate success. The ID was worn by members of our armed forces as a way to keep their loved ones back in the States close at hand and in their thoughts as they defended our nation.

In 1959, Speidel introduced chain ID bracelets called Big Boy/Best Girl, to diversify our offerings. These became some of the most popular bracelets sold in the industry and they remain so today.

Over the years we have continued to expand our Speidel ID bracelet product line, including the introduction of the very popular and successful My First ID® bracelets for children, and Medilog® Medical Alert bracelets – which have helped to save countless lives by notifying first responders and medical teams of health-related conditions of the wearer. And, like all Speidel IDs, they are proudly made in America.