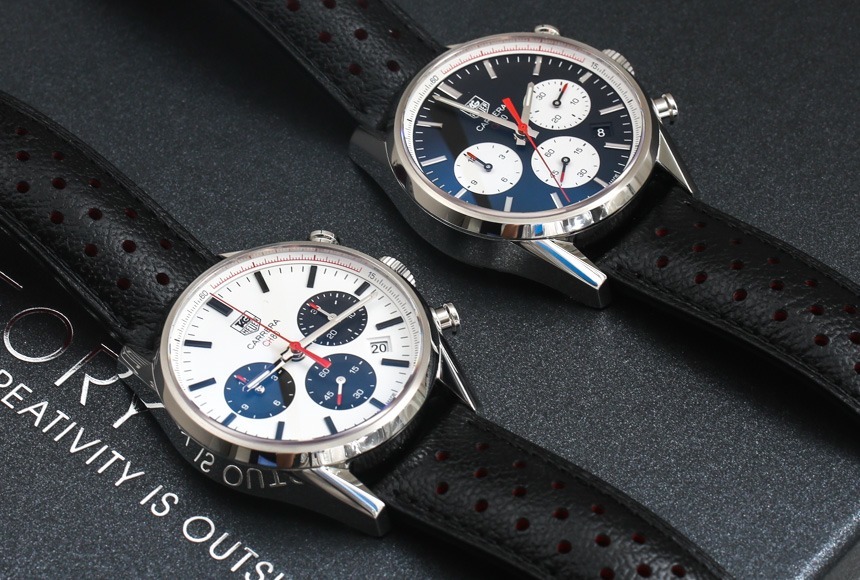 For 2014 one of the major new watch releases from TAG Heuer was this new version of the Carrera they call the Carrera CH 80. The name perhaps does not allow most people to fully appreciate the nature of this rather fantastic model that celebrates both why people loved the original Carrera models as well as the technology TAG Heuer is known for today.

aBlogtoWatch debuted the Carrera CH 80 watch not long ago and we discussed how the in-house movement was the breakthrough element of this beautiful new design. Well “new design” is really relative. What is old is new in this case. While TAG Heuer imbues the Carrera CH 80 with modern design cues, the idea of the CH 80 model is to recall some of the original Carrera models from the mid 1960s. Specifically, the two-tone high-contrast dials and tri-compax layout for the chronograph subdials. Some of the modern elements (aside from the movement) include the many  dashes of red on the dial. I must admit that the amount of red color on the dial worried me before seeing the watch in person – but after getting some hands-on time I was relieved that in real life the red isn’t too distracting or overbearing in relation to the overall design.

Its role is primarily to color the chronograph seconds hand, but it also is used for the tips of the colored hands, part of the minute scale, and the inside of the strap. “Red overload” does not occur as the primary feature of the dials is the black and white “Panda” look. This is one of the main reasons that I like the collection, because they were inspired by historic models that were completely black and while. I actually asked TAG Heuer why the hands needed to have colors at all and they said it was because of their modern DNA and focus on sports. That is nice and all, but I think there is a very good argument to be made in support of creating at least one version of these specific early adopters of the CH 80 movement-based Carreras to have mostly black and white dials with out extra colors. It would be interesting to more or less recreate the classic monochromatic looks of the historic pieces in at least some form, especially given the layout of the new in-house made movement.