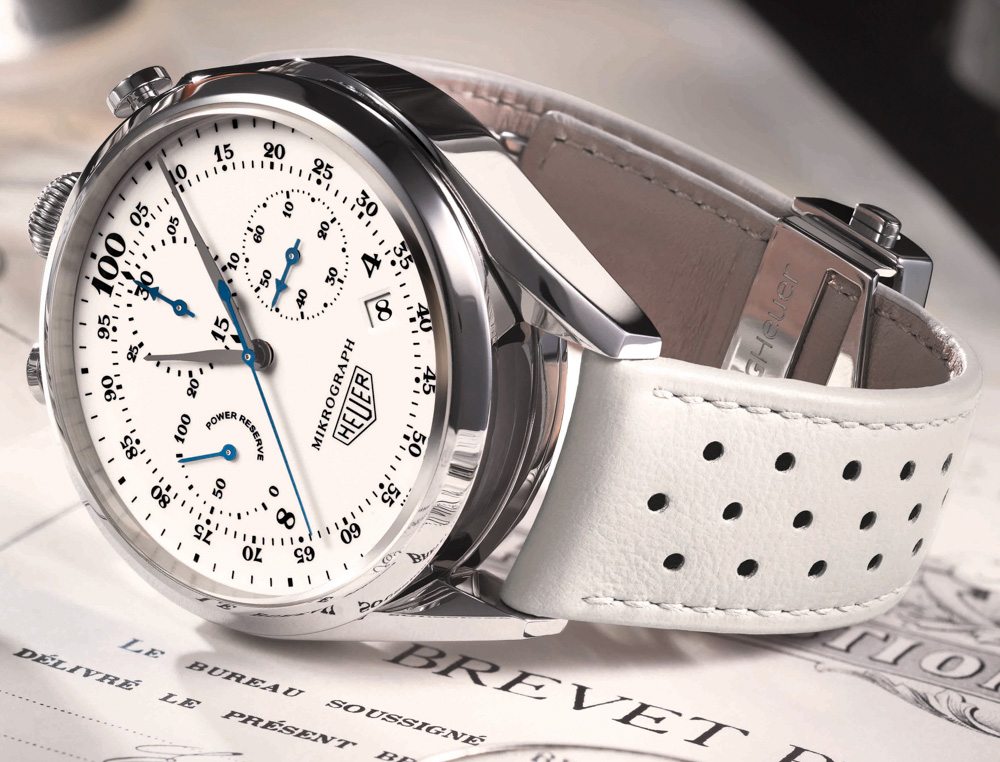 In honor of their 1916 Mikrograph Stopwatch, TAG Heuer has announced the new 2016 Mikrograph 100th Anniversary. This is the first Mikrograph we’ve seen in a couple years, and while it boasts the same impressive functionality, a new case and dial design manages to make direct reference to its 100-year-old lineage. With TAG pushing to expand their market with cheaper tourbillons and democratically elected Autavias, it’s exciting to see them revisit the exceedingly complex and rather special Mikrograph platform. The Mikrograph, as an idea, is characterized by its history as the first stopwatch that offered 1/100th of a second resolution. The 2016 Mikrograph 100th Anniversary sports a bullhead layout (with the crown and pushers placed at 12 o’clock) and a unique two-section case that allows the inner case to be detached from the strap and lugs. Once removed from its wrist-borne platform, the TAG Heuer Mikrograph 100th Anniversary watch can be mounted into a desk stand or a dashboard mount for further use as a stopwatch. On wrist, the steel-cased TAG Heuer Mikrograph 100th Anniversary is 45mm wide with long sloping lugs, a thin bezel, and an expansive white dial. The dial design is inspired by the 1916 Mikrograph stopwatch and offers strong legibility with black markings and long blued hands. The chronograph functionality measures a maximum of 30 minutes, with a minute counter at 12, a seconds counter at 3, and the 1/100th scale surrounding the outer edge of the dial, read from the long central 1/100th seconds hand. Along with a standard hour and minute hand, we also find a power reserve indication at 9 and a date display at 4:30. As a further nod to the 1916 stopwatch, the 2016 TAG Heuer Mikrograph 100th Anniversary has a large onion crown at 12, which I assume will be a treat to use when topping up the power reserve.

All of this high-speed functionality is managed by a very impressive movement that boasts two balances, one regular 4Hz (28,800vph) balance for the time, and one 100Hz (360,000vph) balance for the chronograph. The Mikrograph movement is COSC certified, uses some 62 jewels, and can power the chronograph for up to 90 minutes or the timekeeping for up to 42 hours. The 90-minute autonomy of the chronograph is due to the huge amount of energy required to fulfill the demand of that 1/100th measure and its ultra high-speed heartbeat. Despite the relatively few versions they’ve ever made, the Mikrograph family seems like such an integral part of TAG Heuer’s line up. Its mix of performance, heritage, and eye-catching design is such a strong fit for TAG. The 2016 TAG Heuer Mikrograph 100th Anniversary will be available this fall with a list price of $21,000 USD. If you want to sport this mix of old-school aesthetic and avant-garde super fast watchmaking, act quickly, as TAG Heuer is only producing 100 units. tagheuer.com