It goes without saying that the Monaco is one of TAG Heuer’s most iconic and recognizable watches. Introduced in 1969 as a tribute to the Monaco Grand Prix, the Monaco is also historically important because it was the first square-cased chronograph and also one of the first automatic chronograph watches. Back then, Heuer worked together with Breitling, Buren, Hamilton, and Dubois Depraz, in a race to develop the world’s first automatic chronograph. Over the years, TAG Heuer has introduced limited edition Monaco watches for various occasions and partners, and the newest limited edition Monaco watch is the TAG Heuer Monaco Men’s Club Japan watch. This particular watch was created especially for Men’s Club Japan, which is a long-running men’s magazine in Japan. Men’s Club history stretches all the way back to 1954, which makes it one of the oldest men’s fashion magazines in Japan. To celebrate their longevity, Men’s Club has teamed up with TAG Heuer to create a limited edition Monaco that comes in a unique hue. That unique hue is, according to TAG Heuer’s specifications sheet, opaline green. To me, it looks more like olive green. It comes in a square stainless steel case that measures 39mm wide with the two chronograph pushers on the right side of the steel case and the crown on the left side – just like TAG Heuer’s new Monaco Calibre 11. An interesting thing about the Monaco is the boxed sapphire crystal that raises quite steeply from the case and also gives the watch a more vintage look and feel. Water resistance is rated at 100m, which really should be the bare minimum for sports watches. The dial is olive green (I’m sticking with that) with two silver registers at 3 and 9 o’clock. The register at 3 o’clock shows the running seconds, while the register at 9 o’clock is the 30-minute counter for the chronograph. The hands for both registers are in black lacquer. The hour and minute hands are done in a baton style, have red tips, and are filled with luminescent material to aid legibility in the dark. The chronograph seconds hand is rendered with striking red lacquer, which matches the red accents used for the hour markers. At 6 o’clock, you have a well-placed date window. To complement the watch, the Monaco Men’s Club Japan watch comes with a matching perforated olive green calfskin leather strap with bright red lining. The movement within is TAG Heuer’s Calibre 11, the same movement that TAG Heuer uses in other similar Monaco watches. It is a self-winding chronograph movement that offers about 40 hours of power reserve and beats at 4Hz. It uses a base ETA-2892 or Sellita SW300 and then adds on a chronograph module from Dubois-Depraz. The movement is visible through a sapphire display caseback and looks to be fairly well decorated for a watch of its price. You’ll find generous applications of perlage and Côtes de Genève on the bridges and a partially skeletonized rotor. The TAG Heuer Monaco has always been a very striking watch because of its square case and bold design, and this new Monaco Men’s Club Japan watch is perhaps even more attention-grabbing because of its unusual green dial. I would prefer a lusher and richer hue of green, but I’m sure there will be fans of this particular color. This watch is limited to Japan and there will be only 100 pieces made, which could make it more attractive for the right diehard Monaco collector. The TAG Heuer Monaco Men’s Club Japan watch is priced at ¥675,000 or 6,050 CHF. tagheuer.com 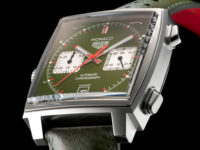 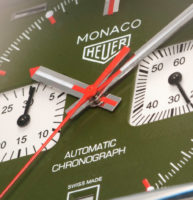 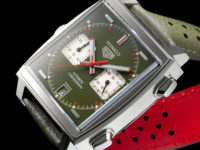 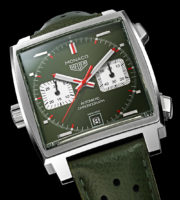 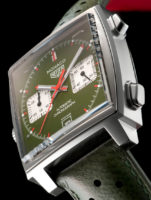 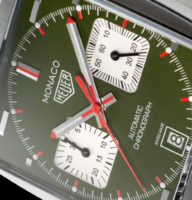