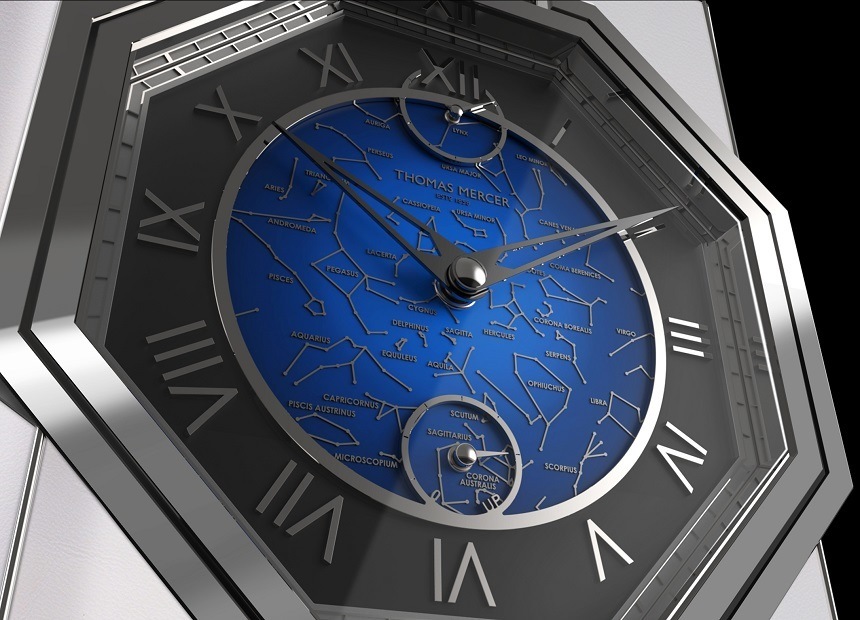 On November 7, 2015, the conclusion of the sixth bi-annual Only Watch auction will take place to raise money to fund research into Duchenne Muscular Dystrophy. With more resources than most industries, the luxury sector has the power to effect change, and as we all know, with great power comes great responsibility. The Only Watch charity is under the high patronage of HSH Prince Albert II of Monaco and is proficient at securing unique donations from some of the world’s best loved watch and clock makers. There will be 44 one-off pieces up for sale this September, one of which is the simply stunning Thomas Mercer Brittanica Chronometer Clock. For wristwatch die-hards, Thomas Mercer is a company that might have flown under the radar, because they only produce clocks. Thomas Mercer was a revered English horologist who plied his trade in the mid nineteenth century and is known for his exceptional marine chronometers. The product of a watchmaking family, Thomas was apprenticed to his grandfather in his youth and further inspired by his father’s work as a sail maker. The young Mercer had a nautical as well as horological background – perfect for the future that lay ahead.

Mercer went on to found his eponymous company in 1858, settling in the horological hotbed of London, where John Harrison’s legacy still inspired competition amongst chronometer manufacturers. Mercer competed with English legends Dent, Frodsham, Reid, Blackie, and Johnson amongst others. This baptism of fire set Mercer on the right path. His son Frank followed in his footsteps, steering the company to first prize at the Greenwich Trials in 1911. By the 1980s TMC had produced over a third of the chronometers ever made. After ceasing production for a few years, Thomas Mercer Chronometers was revived in 2012 and has since re-established itself as a marine chronometer master. The Thomas Mercer Brittanica Chronometer is a table clock that immediately stands out for its lustrous dial, in blue to match this year’s Only Watch logo. The exquisite, hand-painted dial shows the night sky that will hang above Geneva on November 7, 2015, at 5pm, which is the date, time, and location that his piece will be auctioned. The dial surround is made of steel, coloured a contrasting anthracite thanks to the galvanic deposition of ruthenium. The Roman Numerals and “railway track” minute ring are finished to a high polished, which looks fantastic against a matte background. The small seconds hand can be seen at 12 o’clock on the dial, while the power reserve indicator is located at 6 o’clock. The distinctive octagonal case is made of Aisi 316 Stainless Steel, fine white leather, and extra white crystals. It stands over one foot tall, at 333mm high, 240mm wide, and 90mm deep; it’s not designed to be ignored. The case also features a glass back, top, and three more revealing windows that give you a great all-round view of the movement. The clock is powered by calibre TM0802. It’s a hand wound movement with an 8-day power reserve.

Its slow-beat 14,400vph (that’s 2 Hertz) escapement doesn’t require much drive and contributes to the long running time between winds (although these days, there are plenty of high-end wristwatches that can boast even greater reserves). The clock features a spring detent escapement and fusee and chain system to regulate the torque delivered to the escapement, preventing the suffering of chronometric performance when the mainspring loses torque as it nears the end of its power reserve. Additionally, an “ovalising balance oscillator” with cylindrical weights, helps keep this clock ticking with the highest level of accuracy. The ovalising balance features a central bar of invar that does not expand or contract under temperature influence. The bar forces the balance into an ovular shape and helps eliminate middle temperature error, which caused early chronometer manufacturers a right royal headache. This unique collection of Only Watch one-off timepieces will be travelling around some of the world’s major cities from September 23, 2015, looking to spread awareness of the charity and its mission, as well as scouting out potential purchasers! Its journey will take-in Monaco (9/23-26), Hong Kong (10/2-5), Beijing (10/9-12), New York (10/17-20), London (10/24-27), and finally Geneva (11/5-7). In its ten-year history, Only Watch has raised millions of dollars for medical research. We can only speculate as to the hammer price of the Thomas Mercer Brittanica Chronometer, but if it fetches what it must be worth in this context, maybe it could help change lives for the better. thomasmercer.com