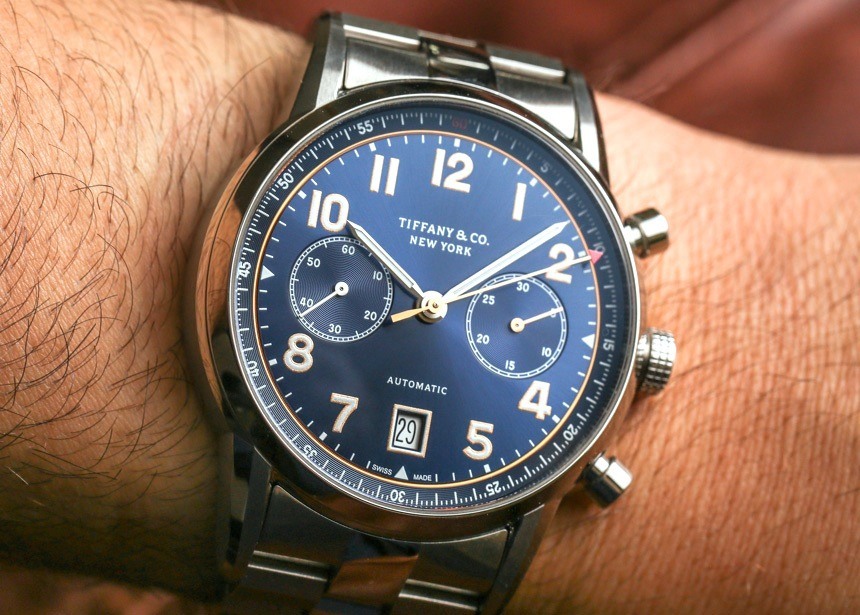 The year 2015 marked the “return” of Tiffany & Co. as a watch maker with the debut of their new CT60 collection. aBlogtoWatch debuted the larger Tiffany & Co. CT60 watch collection here, and prior to the hands-on debut, I had an opportunity to meet with some representatives from the brand to check out the larger collection hands-on. Today, I bring you a full review of the blue-dialed version of the Tiffany & Co. CT60 Chronograph on a bracelet – a timepiece that I’m happy to say has given me a lot to talk about.

I’ll start with a bit of my own history with the Tiffany & Co. brand as a producer of timepieces. As I was becoming a watch lover in the early 2000’s, I eventually started to come across Tiffany & Co. branded watches, which thoroughly inspired me not because of their conservatism but rather because of their pronounced avant-garde (yet refined) qualities. One of my first grail watches (I never ended up getting one) was a Tiffany & Co. Steamerica produced in the 1990s, and very early on into the life of aBlogtoWatch in 2008, I purchased and reviewed a Tiffany & Co. Mark T-57 watch – which I still think was a cool and appropriately varied collection of formal-minded sport watches. More so, I observed with interest other timepieces from Tiffany & Co. such as models in the well-established Atlas collection. In 2010, Tiffany & Co. debuted their first collection of timepieces produced in collaboration with their new partner The Swatch Group – a family of timepieces that I was not particularly shy about expressing my dissatisfaction with. It wasn’t that the timepieces were of a low quality, but rather that their designs were not what I felt matched consumer expectations of the storied American luxury brand. The relationship between Tiffany & Co. and The Swatch Group eventually dissolved over differences in opinion over strategy. The Swatch Group went on to purchase Harry Winston to satisfy their desire for a jewelry brand (that also made watches), learning from the Tiffany & Co. relationship lesson and, in my opinion, making better use of their new American-founded luxury jewelry brand.

Tiffany & Co., on the other hand – without an internal capacity to produce watches – needed to make a decision about the future of its timepiece offerings once it was clear that their partnership with The Swatch Group was coming to an end. While the mainstay of Tiffany & Co.’s profits come from silver and jewelry items (to my knowledge), the importance of a strong “watch portfolio” cannot be discounted – especially given the solid retail foundation of the company. It is, in fact, the important brick and mortar retail presence of Tiffany & Co.’s many stores which makes it so attractive to them to have a strong in-house watch brand – not to mention the company’s own impressive history with timepieces. Thus, several years ago, the decision was appropriately made that Tiffany & Co.-branded timepieces would necessarily be part of the company’s long-term goals. But where to start back up? I imagine the internal discussions at Tiffany & Co. regarding what their next generation watches would be like were extremely interesting. Continue where the brand left off at its strong point more than five or six years ago? Offer new versions of existing model collection such as the Atlas and gloss over a few years of models that they didn’t feel connected with the brands image? Or perhaps metaphorically “wipe the slate clean” by presenting a brand new collection that would reset the face of Tiffany & Co. watches for a new generation of customers? The final decision, in many ways, was a combination of all these directions, but the overarching theme was one of a “thematic reset” where the now-named “CT60” collection would dominate the fresh face of the brand’s watch offerings – by ironically going back to some of its design roots circa the mid 20th century. From there, basing the core theme on a very classic look, Tiffany & Co. would be free to discover for itself where its watch branding and design should go. Just as a reminder, “CT” stands for the company’s founder Charles Lewis Tiffany, and “60” merely represents the number of minutes in an hour, or seconds in a minute. And thus, as I explained in the above linked-to introduction article from April 1st of 2015, the Tiffany & Co. CT60 collection was born. The core dial and case design was inspired by a Tiffany & Co. timepiece from 1945 that was gifted to American President FDR, which – as I will explain – is framed by numerous modern elements that first present a retro-inspired timepiece that is ultimately very contemporary in its execution.

The decision to “go retro” in terms of the core theme is no doubt due in part to the recent popularity of vintage timepieces or more traditional designs. In fact, just as Tiffany & Co. wanted to reset its thinking on the design of watches going back to parts of its origins, the watch industry at large underwent a similar resetting after the economic crash of 2008. One of the reasons that traditional watch designs are still so successful is that they primarily focus on important elements such as design versatility and, more importantly, legibility. In an era where watch executives often suggest “people don’t buy watches to tell the time,” we are inundated with poor-quality “lifestyle designs” which seem to emphasize form over function. This thinking is quite wrong and, by intent or by accident, more simple and legible dials with just a touch of decorative class have for the most part been favored by a large number of high-end watch consumers. I say all this as a means to explain why to some more seasoned watch lovers’ eyes the Tiffany & Co. CT60 collection may look basic – especially in contrast to much that bore the brand’s name over the last 15-20 years. I will admit that, at first, I too was not immediately excited by the design of the Tiffany & Co. CT60 watches. It wasn’t that I didn’t like them – quite the contrary, because I did. Though, my sentiments were more akin to “these are quite marketable,” versus, “I have to have one.” That is mostly because my own watch tastes are often quite exotic or at least about less orthodox designs. Here was a rather conservative watch with a dial inspired by something from 1945 that looked a bit too mature and buttoned-up for someone living in Los Angeles who rarely wears long sleeves. As is the case with some watches I end up being quite fond of – the Tiffany & Co. CT60 Chronograph needed to grow on me. I now rely on the watch as a very important part of my personality when I want to look responsible and adult. It is also quite difficult to resist the not-so-subtle sheen on the sunray-finished metallic blue “soleil” dial (which also comes in gray and silver versions). A hallmark element of the dial design is the handsome, mid-century sans-serif Arabic numerals which mostly populate the hour ring. These are created using “silver poudre” which is literally a form of colored powder. Slightly raised off the dial, these offer excellent legibility along with the hands. Unfortunately, the numerals do not have luminant; only the hour and minutes hands do. What I think Tiffany & Co. most got right with the Tiffany & Co. CT60 Chronograph dial (there is a three-hand version as well) is the symmetry and balanced proportions. In true “retro spirit,” the chronograph dial only uses two subdials – one for the subsidiary seconds and one to track the chronograph minutes (up to 30). At 6 o’clock is a window for the date. Moreover, even though there isn’t much luminant on the dial, the finishes and sense of contrast on the dial work quite nicely to ensure legibility – even when light reflects on the domed sapphire crystal. At 42mm wide, the Tiffany & Co. CT60 comes in both steel and 18k rose gold (though not for all dial colors, including this blue which is only available in the steel case). Currently, the bracelet option is only available in steel. While the CT60 Chronograph does look handsome on the matching alligator strap, I do greatly recommend the bracelet. The connection point of the where the strap fits is rather high up on the lugs near the case – which causes much of the comparatively long lugs to jut out in a way that isn’t ideal. Alternatively, the lugs appear to be more specifically designed for the accompanying bracelet which removes the “stick-out-lugs” issue altogether. If anything, Tiffany & Co. knows the importance of having a little pizzazz in even the most conservative of designs. It is this latter element which I think helps the Tiffany & Co. CT60 collection work so well. Despite the highly effective legibility and utility of the watch in general, there are some little bits and pieces of glimmer, shine, and polish that catch your eye in just the right way. It is actually Rolex who is a master at this craft, carefully designing visual cues into many of their watches which are intended to exist not for the wearer, but for people seeing the watch on the wrist of the wearer.