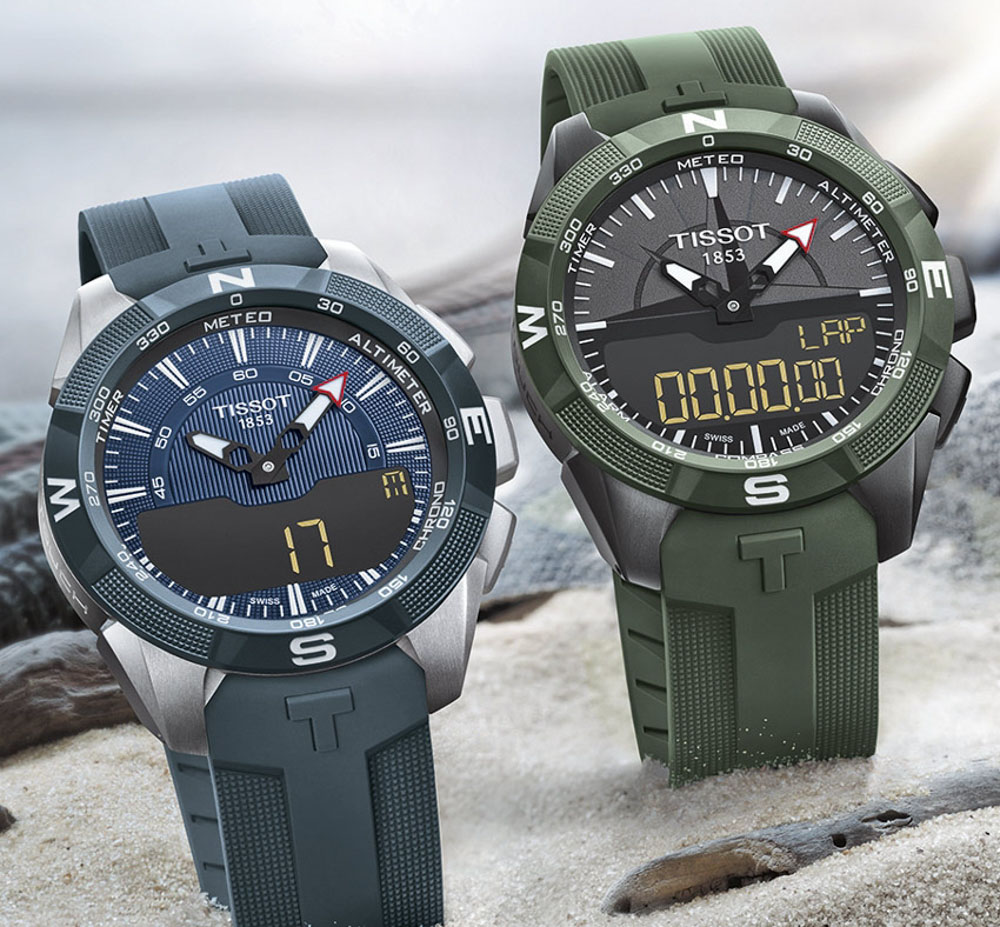 Let us first not forget the Tissot T-Touch that (as of now) never was. Almost exactly one year ago today, Tissot announced the Tissot Smart-Touch smartwatch, as a version of the T-Touch Solar that would connect to a smartphone app via Bluetooth. As far as I know, the Smart-Touch is not out and isn’t planned to come out. So the replacement for it is the Tissot T-Touch Expert Solar II. These aren’t likely to be the only two versions of the Tissot T-Touch Expert Solar II released in 2017. What Tissot has released images for thus far are a green military-style T-Touch Expert Solar II and a blue marine-style model. Of course, aside from the updated dial styles, you can see that the clearly exposed photovoltaic cell on much of the of the original Solar model has been replaced with a more covert dial done similarly to the way Citizen Eco-Drive models do it. A new material use is ceramic. The Tissot T-Touch Expert Solar II case is still titanium (likely with a matching titanium bracelet in addition to the rubber strap), and the bezel is now colored ceramic. Further, the compass-style markers on the bezel are said to be painted with luminant. The hands on the dial are still on the shorter side – but that is as a side effect of carbon hands needing to move very quickly given how the watch works.

If you aren’t familiar with the Tissot T-Touch family, the concept is pretty neat. The basic idea is that functionality is used by pressing various places on the sapphire crystal. Thus, if you see (for example) “Altimeter” on the periphery of the dial, you first press the crown pusher and then your finger on that region of the crystal for the watch to go into altimeter mode, and for the hands and partial digital screen to work together in order to indicate the current altitude. As a “triple sensor” watch, the T-Touch Expert Solar II has a barometer, altimeter, and compass (the latter being the most fun to use by far). Tissot claims that the T-Touch Expert Solar II has 20 functions, which range from multiple time zones and chronograph (both lap and regatta), to a perpetual calendar and two different alarms. As I mentioned, over the dial is a sapphire crystal and the case is water-resistant to 100 meters. The T-Touch Expert Solar dial allows light to enter through the face in order to charge the battery, which also has a battery life indicator. No, there really isn’t anything here that Casio hasn’t done before, but Tissot arguably put it all into a more refined-looking package – and the overall looks of the piece score very high.

Again, I am not clear on what (if any) new features the Tissot T-Touch Expert Solar II adds that the original Expert Solar lacked. My assumption is that this might be a technical update with a more reliable, refined system, but since I haven’t discussed it with Tissot, I don’t know yet. As for cosmetic matters, there are the clear upgrades which are notable, such as the new dials which hide the photovoltaic cells, and the ceramic bezels. In 2017, with smartwatches getting more popular, the key benefit of something like the Tissot T-Touch Expert Solar II is the lack of having to worry about battery life. This isn’t going to be as functional as a full-featured smart watch, but it isn’t going to force you to ever plug it in. My guess is that pricing will be more or less the same as the outgoing Solar, with an estimated price for the Tissot T-Touch Expert Solar II being around $1,200. tissotwatches.com