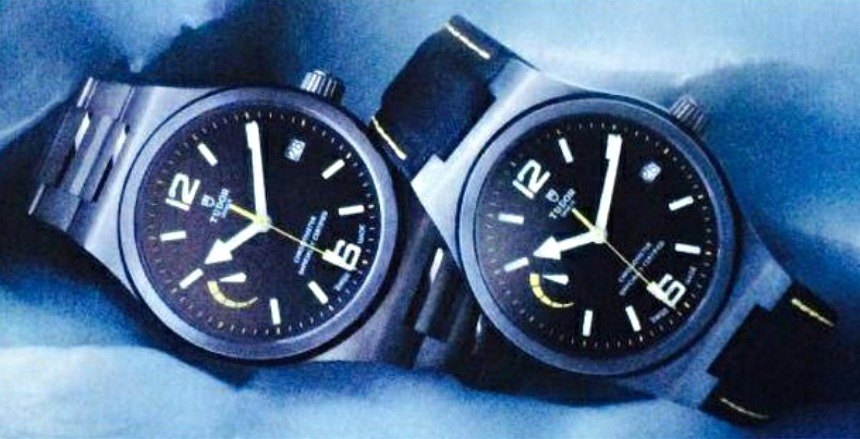 No point in waiting, since one of Tudor’s new-for-2015 watches has apparently been leaked a bit in advance of Baselworld 2015 – this is the Tudor North Flag watch, and I think we are going to rather like it. A picture of a catalog or magazine page with the Tudor North Flag watch has been posted by watchawrist (the personal Instragram account of fakewatchbuster) and I don’t doubt that it is real. Tudor even has a trademark registration for Tudor North Flag. I also suspect that another 2015 watch from the brand will be the Tudor Wildcall – so we will see what that ends up being.

Aside from having a dial that looks a lot like the lovely Eterna KonTiki Diver from 2008 complete with the same color tone and style of power reserve indicator, the Tudor North Flag is said to contain Tudor’s first in-house made movement. Given that Tudor is owned by Rolex – who makes movements for all of their own watches, it isn’t surprising that Tudor has an easy way of getting well-made in-house movements. What is odd, however, is that for the last few years, Tudor has positioned themselves under Rolex from a price perspective based on the fact that they don’t use in-house movements (like Rolex does), and rather, movements sourced from other quality Swiss movement makers such as ETA.

Does now having models such as the Tudor North Flag with in-house made movements fundamentally change the Tudor brand and narrow the gap between Tudor and Rolex? Maybe. Does it matter? Maybe not. The new in-house made Tudor movement is called the caliber MT5621 and it sounds pretty exciting, being an automatic with 70 hours of power reserve (along with a power reserve indicator on the dial). The MT5621 also features a silicon balance spring and is COSC Chronometer certified. The movement will be visible through a sapphire exhibition back, which is very new for the brand. As far as I know, there has never been a Rolex watch with an exhibition caseback, and now there is what is essentially a Rolex-made movement that is visible through the rear of the case.

We’ve known for a while that Rolex has given Tudor a lot of leeway to experiment and be a playing ground for concepts that Rolex at large is often hesitant to implement, given their conservative attitude toward product changes. Having said that, Rolex finally released a watch with a silicon balance spring last year – but only for high-end women’s watches. Their silicon technology is called Rolex Syloxi (more here). The implications for Tudor using an in-house made movement with a long power reserve and silicon parts may very well hint to what Rolex might be doing in their sport watches in 2015 or the years to come.

There is a modern design to the Tudor North Flag that I like. It is as though they combined the modern feel of the Tudor Pelagos with the retro military feel of the Tudor Ranger (seen in the hands on the dial). While none of the design elements of the Tudor North Flag are inherently original, it is a nice design curation by Tudor. We don’t have all the tech specs yet, but the case is 40mm wide in steel. The North Flag name is part of a North Pole theme and surviving in cold temperatures… probably a good idea for those who have had to live New York or otherwise on the north east coast of the US this winter.

The black ring around the bezel is a slick design touch and I like the black and white dials with a little bit of yellow. The cases are attractive, but they have a proprietary lug system which will discourage use of third-party straps. The Tudor North Flag will, however, come on a strap or bracelet option. Thus far, most new Tudor watches have been designed with traditional lugs so that people can use their own strap ideas – and we hope that Tudor has not abandoned that philosophy with all of their new watches.

No word on the pricing at this point, but we will know more next week. Having said that, it is safe to say that the Tudor North Flag will cost more than current Tudor sport watches because of the movement but a bit less than Rolex watches. So I am guessing somewhere in the $5,000 – $6,000 range that will still make them a good value for a handsome adventure-style timepiece. tudorwatch.com

UPDATE: This watch was launched and we will be doing a write-up very soon with all the info, updating this article with the URL for the new write-up. Price €3500 Euro