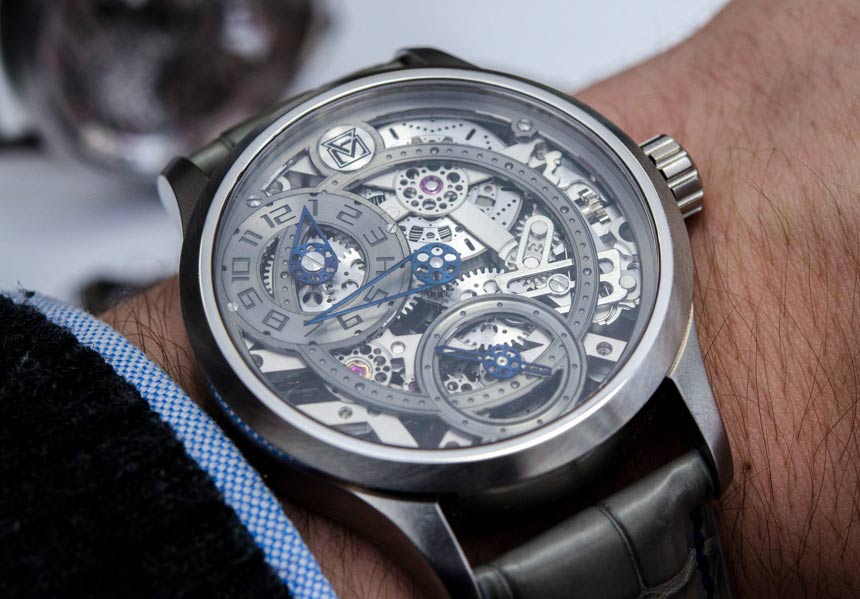 The skeletonization of high-end timepieces has long been a viable option for those watch collectors and enthusiasts who seek a way to appreciate mechanical movements more thoroughly than a sapphire case back or an “open-heart” dial allow. Michal Molnar and Igor Fabry of Molnar Fabry are two Slovakian certified jewelers who, bitten by the “watch-bug” and driven by a developed passion for fine watches, have specialized in creating unique, made-to-order timepieces comprised of beautifully and heavily modified base movements from ETA, Unitas, and others.

We were invited by the young duo to visit them at their workshop in Banska Bystrica, a small town situated in the central part of the country and surrounded by the beautiful Slovakian countryside. Igor Fabry and Michal Molnar in their workshop situated in Banska Bystrica, Slovakia.

Skeletonization is the process of carefully removing structurally non-important material from the center of major movement parts, namely bridges, cocks, and plates. Just like any other part of watchmaking, we have seen this task executed to greatly different levels of quality. First and foremost, what primarily defines the structural and aesthetic quality of the final product is the skill of the craftsman performing the task and the level of refinement which he sets for himself as the goal to achieve. Another important factor is, of course, the complexity of the movement which is to be modified – and we should note that the majority of skeletonized watches are not necessarily complicated movements to begin with. Perpetual calendars, chronographs and chiming watches contain so many components that the amount of material that can be removed to create the see-through aesthetics is truly minimal. A work in progress: yet another unique dial design at an early stage of its creation.

Instead, more basic three-hand watches, sometimes with automatic winding or a date indication, and more rarely with a tourbillon escapement, are used for this task, as the comparably larger bridges, cocks and other parts provide surfaces large enough to allow for more creative designs – and creativity is certainly not in short supply at this two-man brand. When I learned that the duo of Molnar Fabry produces no more than around eight watches a year and that it can take several weeks, and often many months, to finish each piece, I expected to see the highest levels of quality in their work – and I was not disappointed. Let’s take a closer look at what their unique take on skeletonization is. Would you be able to guess the base movement? It is a (heavily) modified Unitas 6498-1.

Perhaps the two greatest difficulties linked to skeletonization are, for one, the fact that it is an irreversible process, meaning that once material has been removed it can never be replaced again, and two, that it results in highly complex aesthetics that can easily make any design look overly busy and unpleasant to the eye. It is much like tight-rope walking, where maintaining the balance between the amount of the removed and remaining material is as important as finding the best mixture of highly modified designs and basic values, such as legibility and timelessness. In essence, it is a science all to itself, a process that necessitates extremely careful planning and all the more accurate execution. The base drawing for the concept of the “reversed movement” and the actual piece, both with still a long way to go until completion.

Speaking of planning, at the time of my visit, Michal and Igor were working on two separate projects. All orders are finalized through an extensive consulting period with the customer, as no two designs are alike and there virtually is an infinite amount of possibilities. One of the projects was the “reversed watch,” seen just above. The idea basically is to feature the time indication on the back side of the movement and hence to have it installed with its original dial-side down, making for what is a so-called reversed watch. Seen on the image is the basic drawing, done by hand and the movement in progress, with its untreated, original brass color still visible. The other project at hand was a skeletonized tourbillon, a completely unique piece, of course. Once you take a closer look at the watch in the image above, you may feel that you have seen it before and there is good reason for that. To give you a hint, I suggest inspecting the tourbillon and especially its cage… Familiar? Rightfully so! The base movement for this piece is supplied by none other than Christophe Claret. What Michal and Igor do to make this piece truly unique is something we will discuss in an article dedicated to this particular watch. Also, we have added images of a few of the duo’s other finished pieces so as to help provide a better understanding on the diversity of their work. For now, let’s concentrate on their other watches and the workshop where they are born – or reborn, rather. For the most part, Molnar Fabry will use ETA and Unitas base movements (2824 or 6497/6498), and rather plain looking ones at that. There are two major reasons for this. For one, it would make no sense to get highly decorated base movements when they are going to completely rework them anyway. Two, the decoration that ETA performs on the bridges already removes valuable raw material from the components, hence reducing the size of the “canvas” on which the craftsmen can work.

Moving on to more tangible results, I will say that owing to the truly impressive design skills and the immense efforts of the duo, I feel that even the most experienced watch enthusiast would be up for a real challenge if he were asked to name the base movement in any one of these pieces. And when it comes to anyone with a less thorough knowledge of different calibers, I see no chance of anyone ever telling whether the finished piece incorporated a completely in-house crafted movement, or an extremely heavily modified one. You see, that is a truly remarkable achievement, especially at a time when there are big brands debuting new in-house movements, which at times are merely somewhat modified versions of other base calibers… But let’s not get sidetracked here. When it comes to creating a new piece from scratch (which is the case in all instances) what Molnar Fabry will do is consult the customer to discuss the defining characteristics of the new project. This is followed by negotiations that concern even the slightest of details and the design is sent back and forth right up to the point when the new design is in complete harmony with the customer’s demands. The result is a one of a kind, unique piece – and unique it is, in the truest sense of the word. Upon my visit they had two finished watches that they could show and which actually were their own pieces. Unlike some other pieces from the duo which showcase softer, more “romantic” aesthetics, these two watches were unquestionably modern-looking, blending angular and minimalistic design with what I would call architectural elements. A close-up shot showing some of the fine details of the duo’s work. All bridges and plates are actually from a Unitas movement.

Sounds good, but it has to look good too! We took numerous macro shots to reveal the finer details, which are present innumerably. In our conversations, I sensed that the isolation (geographically and otherwise) from the Swiss “cradle” of high-end watchmaking was a pressing issue for Molnar Fabry, especially at the earlier stages of their careers. It is easy to see that this lesser exposure to comparable products and to the people behind them made it more difficult for the duo to set the bar, and perhaps that helped them make such a huge leap forward. Skeletonization in progress on a piece that will ultimately become the hour hand.

Oftentimes, this isolation and relative freedom from competitors is what helps for a mindset that is free from limitations frequently brought upon it by the time spent analyzing the works of others. Therefore, what Michal and Igor are capable of achieving with traditional methods and tools impressed me for three reasons. First, their work is incredibly clean even upon closer inspection, no matter what we compare it to. All patterns are so perfectly executed and laid out that they appear to have been achieved by CNC machines – which they were not, as all decorations are done by hand. Second, they are of a very young age to be performing at this level, making their achievements all the more impressive. And third, they exercise such creative freedom and execute it at such quality that it feels and looks like as though they had been learning from masters of the trade and have practiced painstakingly over the course of years or even decades. What they told me is that they learned what they know through trial and error and also, as noted previously, by consulting some of the key printed and online guides on watchmaking.