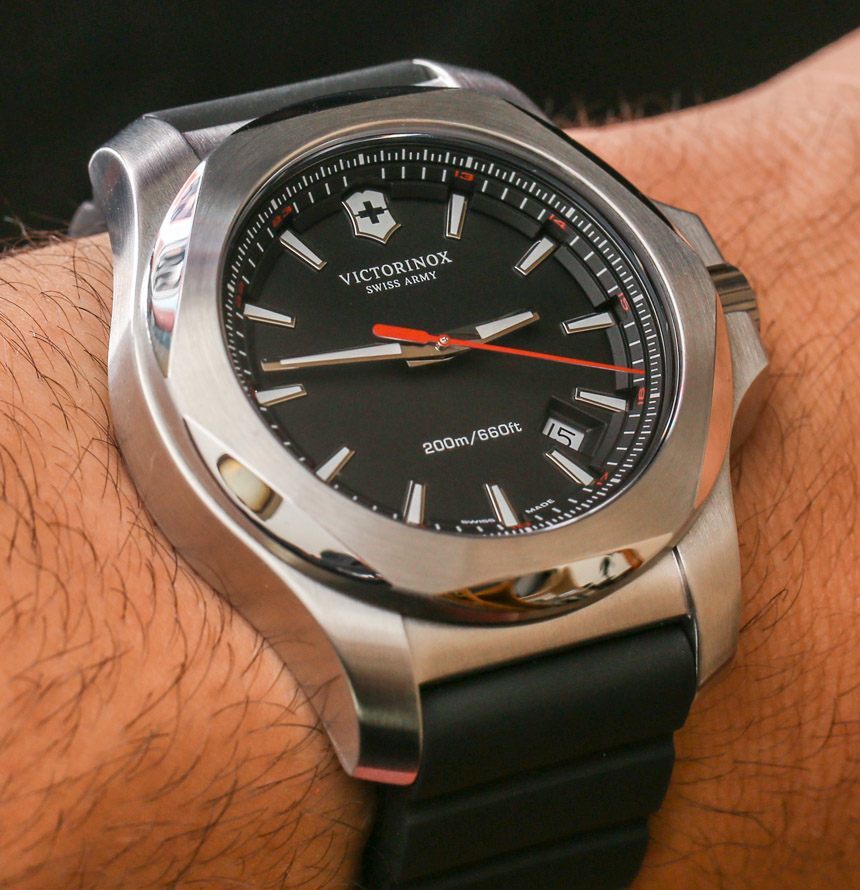 So let’s talk about durability for a bit. At the time Victorinox Swiss Army first released the INOX, I was very curious what special features and materials they were using as part of this new durability mission for the watch. After some investigation, I didn’t find anything out of the ordinary. The 43mm wide case is in steel, the crystal is sapphire, the case is water resistant to 200 meters, and inside the watch is a pretty standard Swiss Ronda quartz movement. So where was all this new found durability coming from? While the Victorinox Swiss Army INOX watch is indeed a durable timepiece, I think the reality is that there is nothing inherently unique about how durable it is. While not all steel quartz sport watches are created equally, there are in fact a lot of really wonderfully durable Swiss watches out there, and it seems like Victorinox Swiss Army simply made some special efforts to communicate those facts about the INOX. It may even be that there are more durable watches in the brand’s line up – that is hard to tell. I don’t say all of this as a negative about the watch because Swiss Army does live up to its promises. However, I feel that I should make a larger point about sport watch durability in general.

While we snob around loving our mechanical watches (which I certainly do), it is easy to forget just how tough a quartz movement-based watch can be. Perhaps the Victorinox Swiss Army INOX’s steel case is extra thick and there is some special buffering around the movement, but in reality, a quartz movement is going to be a lot more durable than a mechanical one. The weakest part of this watch is that it has moving hands. If you put a digital screen and removed all the moving parts you’d be in G-Shock territory. But we can’t do that. We need to draw some lines. This is a Swiss watch, after all, and Victorinox Swiss Army has a reputation to uphold. That being of a durable sports watch maker that nevertheless injects a sense of slick European style and design into their watches. While the Victorinox Swiss Army INOX is not universally loved, I do find the clean dial and hexagonal bezel to be attractive. This is one sharp looking beater watch, if you ask me. Victorinox Swiss Army sells themselves by matching a matte black dial with polished hands and applied hour markers that give just the slightest amount of visual bling without sacrificing legibility. That hint of red gives it some flair, so that it doesn’t become another monochromatic bore. While sales people like to ensure that watches have a date complication (because apparently still so many consumers are interested in that), think of how nice the Victorinox Swiss Army INOX watch face would look without the date window.

INOX is actually a French term for stainless steel (“inoxydable”), which is charmingly fitting for a watch produced in a thick steel case. However, Victorinox Swiss Army has an even better meaning for the name, if you dare wish to repeat it to a friend. Try explaining to them that “INOX” really stands for “Impact Neutralizing Object for the X-tremes.” I am not even going to offer a comment in regard to that statement. Let’s just stick with the French term for now, OK? Speaking of abuse, the Victorinox Swiss Army INOX watch comes with plastic case guard that attaches over the bezel and matches the color of the dial and strap. For 2014, Victorinox Swiss Army offers the INOX with a black, blue, or khaki green dial. Each gets its own matching “protective bumper,” which I don’t fully understand. Think about it, if you are communicating just how durable the watch is, why do you need to include an extra piece of plastic to protect it further. In a sense, this is a retro throwback item in homage of the 1980s, when plastic guards sometimes came on watches. It attaches and detaches easily enough from the case, but aside from a momentary novelty, it doesn’t really serve a huge purpose unless you just happen to like the look of it – which is OK, I guess. I suppose it opens up a new area of accessories… the “watch mask.”