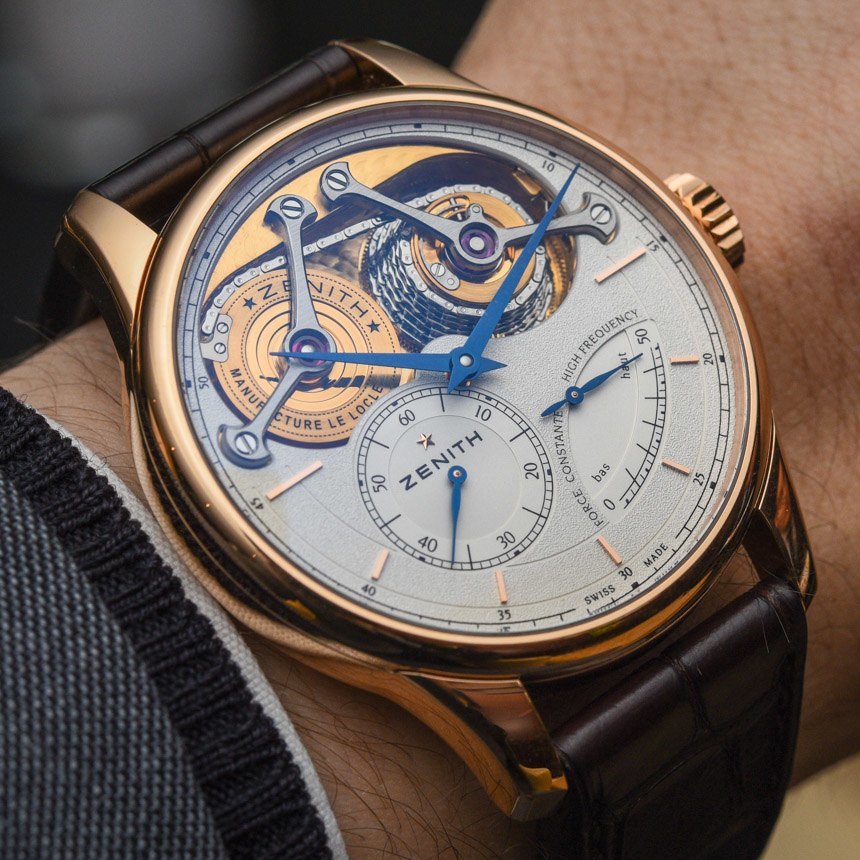 It seems that men named Favre are blessed with uncommon ambition and zeal. Although Green Bay’s iconic quarterback is better known, Georges Favre-Jacot, the founder of Zenith, can boast the fuller trophy cabinet. Since its foundation in 1865, Zenith has won 2,333 chronometry prizes (which kind of puts that one Super Bowl in the shade). Aged just 22 when Zenith opened its doors, Favre-Jacot was known for his enterprising spirit and daring. This year, the Zenith Academy Georges Favre-Jacot will be released to celebrate 150 years since the Le Locle local announced himself to the world and cemented his place in horological history. Zenith has produced something befitting its founder’s genius, while staying true to the modern stylistic characteristics of the brand. The case silhouette of the Zenith Academy Georges Favre-Jacot watch is identifiably from the Zenith Academy, and the ‘guiding star’ logo is featured on the dial and prominently on the crown. You could, however, be forgiven for skipping over the necessary nods to the brand’s identity in favor of ogling the complication that sets this wristwatch apart from the crowd. A kidney-shaped cutaway, spanning from 9 to 3 o’clock, reveals a finely wrought fusée and chain system. A fusée is a cone-shaped pulley around which a chain attached to the barrel (containing the mainspring) is coiled. It is a device that we have seen used in some other previously debuted offerings, such as the Romain Gauthier Logical One, the Breguet Tradition Ref. 7047, or, sticking with Zenith, the Zenith Academy Christophe Colomb Tourbillon.  We have discussed this device in all those previous articles in great detail, but to keep it short, we will say the primary function of this centuries old invention is to counter the effects of the ailing torque of the mainspring as it winds down, hence improving isochronism over the course of the watch’s power reserve – which, in the case of the Zenith Academy Georges Favre-Jacot, is 50 hours. Particularly well executed is the chain itself – a perfect replication of the most traditional fusée design, finished to a mind-boggling standard. My favorite example of this attention to detail is the contrasting finish of the fusée barrel. There is a beautiful interplay between the high polish centre, made interesting by its concentric step pattern, and the grained outer circumference that bears the brand name and the star logo in black. While this barrel rotates beneath the wishbone-shaped bridge, which itself sports a straight grain, the effect cast by light hitting these three finishes is a sight to behold. The fusée looks even better in real life from an almost side-on angle, from which its true majesty can be appreciated. Its height and dominance of the dial is really noticeable when you can see the wall of the chain. Thankfully, Zenith had the good sense to make the cutaway large enough to best display their efforts.

In fact, the finish of all functional components is rightfully expected to be beautifully executed on a watch of this caliber – it is only when the more superficial aspects of the Zenith Academy Georges Favre-Jacot are scrutinized that contention arises. When brands attempt to create a timepiece that honors the past – especially a past as personal as this watch attempts to extol – there is a fine balance that must be struck. The battle between old and new. There are those who believe brands must maintain congruity with their current range in order to satisfy their existing customers. Others insist it is more important a watch is congruous with itself. Another camp might argue that a mechanical watch is duty-bound to acknowledge the past and the present in the same breath. Broad as these principles may be, they provide a solid framework by which we can assess how successful or otherwise the Zenith Academy Georges Favre-Jacot might be. There has been an obvious attempt to align the Zenith Academy Georges Favre-Jacot watch with the current range with the case shape. The Academy watches have a pretty unadventurous silhouette, but it is modern enough without being crass in any way at all – although at 45 millimeters wide, it certainly is relatively large. The problem with the styling of this watch for me, lies in the half-hearted dial design and the seemingly non-existent relationship of the hands. The majority of fusée-driven wristwatches I have seen all fall neatly into the second critical category – their design is eminently consistent with itself.

For example, the Logical One is a mad, punky re-imagining of a classic design. It is bold and futuristic. It is a unique and immediately iconic piece. In contrast to this fashion-forward approach, the Breguet Tradition fusée Tourbillon is a pure embodiment of horological classicism. The craziest thing about the Breguet is its high-domed glass, which offers the wearer a more three-dimensional view of the refined gear work, sandwiched between frosted plates and chunky, George Daniels-esque cocks. Both designs work because they seem to thoroughly believe in themselves. For me, the Zenith Georges Favre-Jacot does not announce itself with quite as much gusto. The Zenith Academy Georges Favre-Jacot may well satisfy those who want to see the brand’s DNA or a mixture of old and new, but, frustratingly, there are several other watches in Zenith’s own range, that do the job so much better! The most damning thing I can say about the dial is its finish. This watch was surely conceived to appeal to lovers of mechanics, of clever complications, of metal in motion. Why, then, did Zenith decide to cover up so much of what is a beautiful movement, with a dull, silver-toned dial?

Its legibility is unarguably superb, but there are plenty of ways to maintain functionality with style – just look at the Zenith Academy Christophe Columb Hurricane for an example of another in-house fusée watch that winds up looking ten times cooler because they went all in on the design instead of folding too soon. Even if the Hurricane is too meretricious for your tastes, it is hard to deny the Zenith Academy Georges Favre-Jacot would have benefited from a nice bit of traditional guilloché or rose-engine turning similar to the reserved dial of the Zenith Academy Christophe Columb Equation du Temps. Granted, these familial examples are way more expensive than the anniversary special, but given the price point, Zenith, as I see it, could have stretched to something a little more elaborate or refined. Sure, the plain dial helps highlight the fusée mechanism and allow it to visually dominate the design of the watch – and for some, that contrast may actually be a welcome feat. A design choice I find more difficult to wrap my head around, however, is in the inconsistency of the styles of the hands. The key issue is that the hands for the hours and minutes and those fitted on the sub-dials seem to originate from two separate watches – it is a bit of a clash of modern and traditional styling. The blue is a good choice, but the large hands appear to be very flat and, more important, sit very awkwardly next to one of the most exquisitely crafted complications in high-end watchmaking. Some will appreciate the traditional curves of the small hands while others will prefer the modern, large, and angular design of the main hands – which seem to work better with the baton indices anyway – but the inconsistency is more difficult to swallow. Speaking of inconsistency, seeing the mixture of English and French terms (i.e. “Force Constante“, “High Frequency” and “Bas Haut“) within an inch from one another further emphasizes the two-faced nature of the dial – a weird and illogical choice. But just as I doubted this watch, my opinion became effusively positive when I saw the case back. I am huge proponent of a well-executed three-quarter bridge. It takes a great deal of restraint to get this right and Zenith have passed the test with flying colors. With just enough to entertain the eye, without relying on gimmicks or flashy finishing, this full view of the movement reveals its humility and begs to be taken seriously as a horological exercise rather than a bombastic market-driven statement. This watch means business. It is a watch made by watchmakers to honour one of the greats, designed for a discerning and intelligent audience. With only 150 pieces available, the Zenith Academy Georges Favre-Jacot is sure to sell out quickly. At a hefty 45mm across, with a height of 14.35mm on the wrist, it is large enough to catch a curious eye. The cambered sapphire is treated with anti-glare on both sides, so the fusée can be enjoyed with clarity. Although certain elements of the design may split opinion, there is enough to get excited about in terms of quality and uncommonness to warrant a price of $82,700. zenith-watches.com