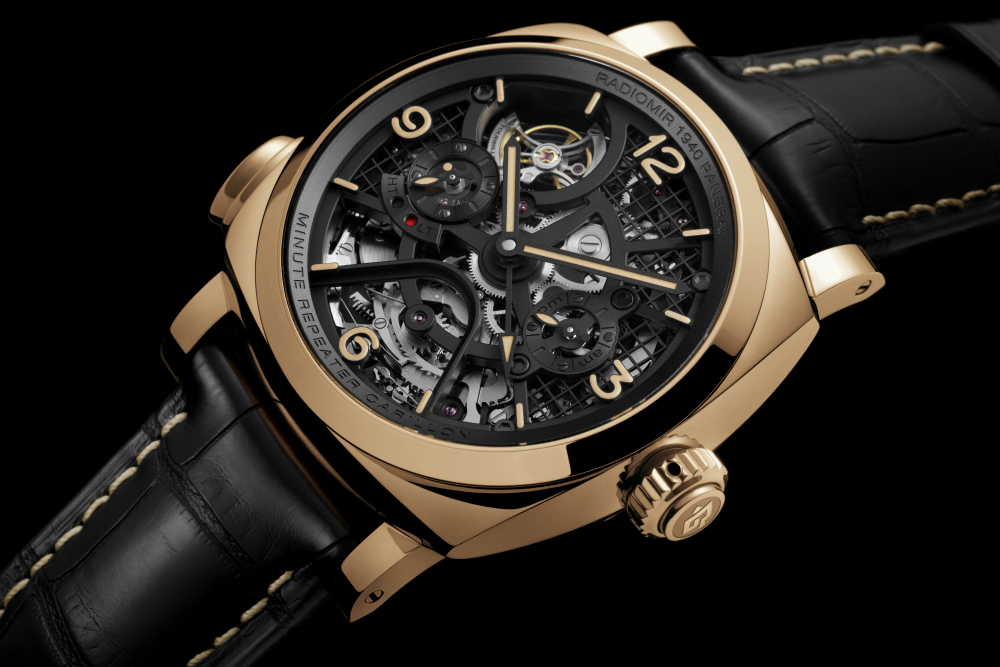 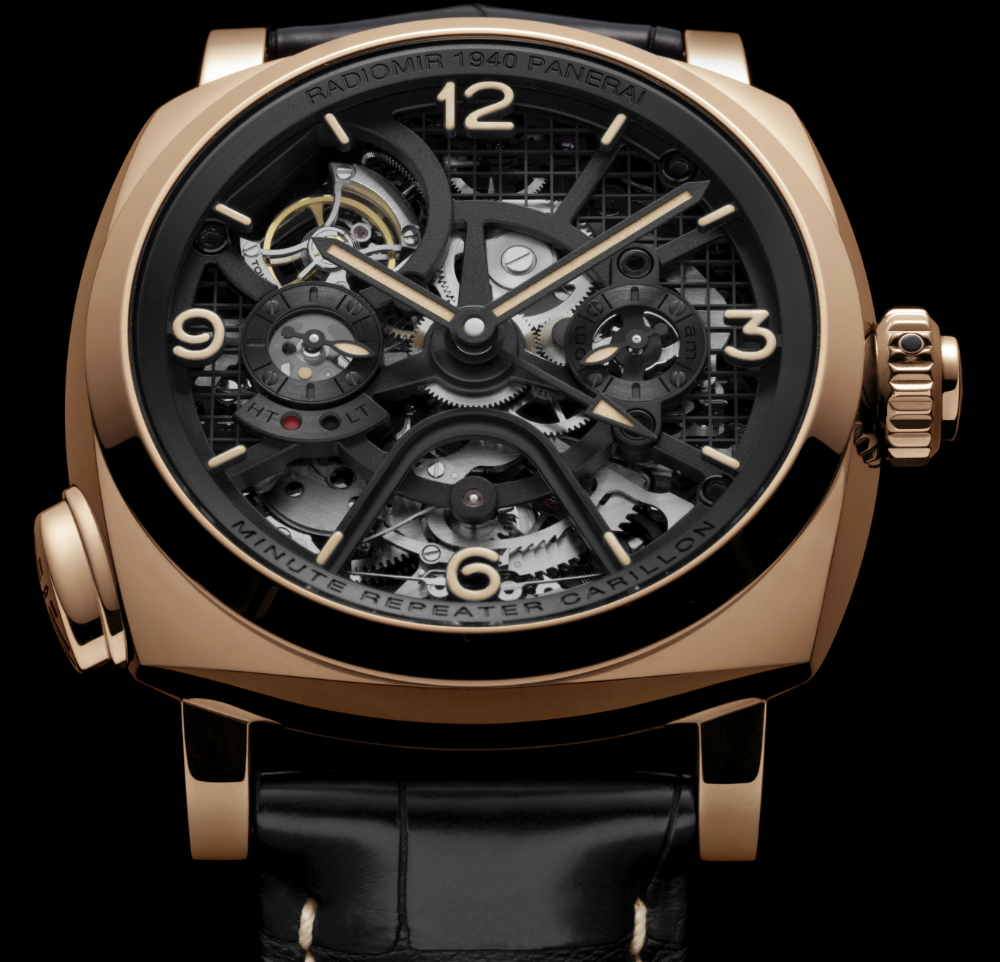 Panerai has just announced the release of their most highly complicated watch featuring  two of their brand new minute repeaters (to chime in two time zones, naturally) and a price tag starting at $400,000 and going up with customizations. Panerai wants to pay tribute to their naval history and this piece is an homage to the significance of bell-tones aboard a vessel out at sea. The Panerai Radiomir 1940 Minute Repeater Carillon Tourbillon GMT watch also has the distinction of being the first-ever watch with two minute repeaters, and also features a tourbillon and a brand new new movement. They must also be keenly aware that it is a future-grail piece for Paneristis and collectors, and as a result they’re offering something unusual in haute horlogerie: flexibility. The watch is made to order and buyers will be able to customize things not only like the strap but hands and even the material the case is made of. 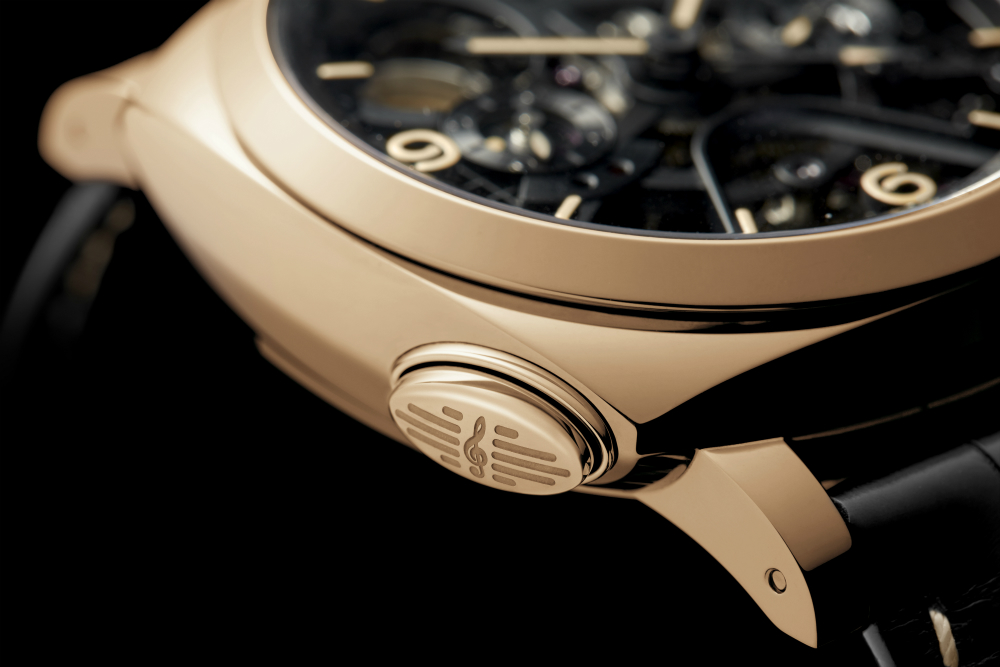 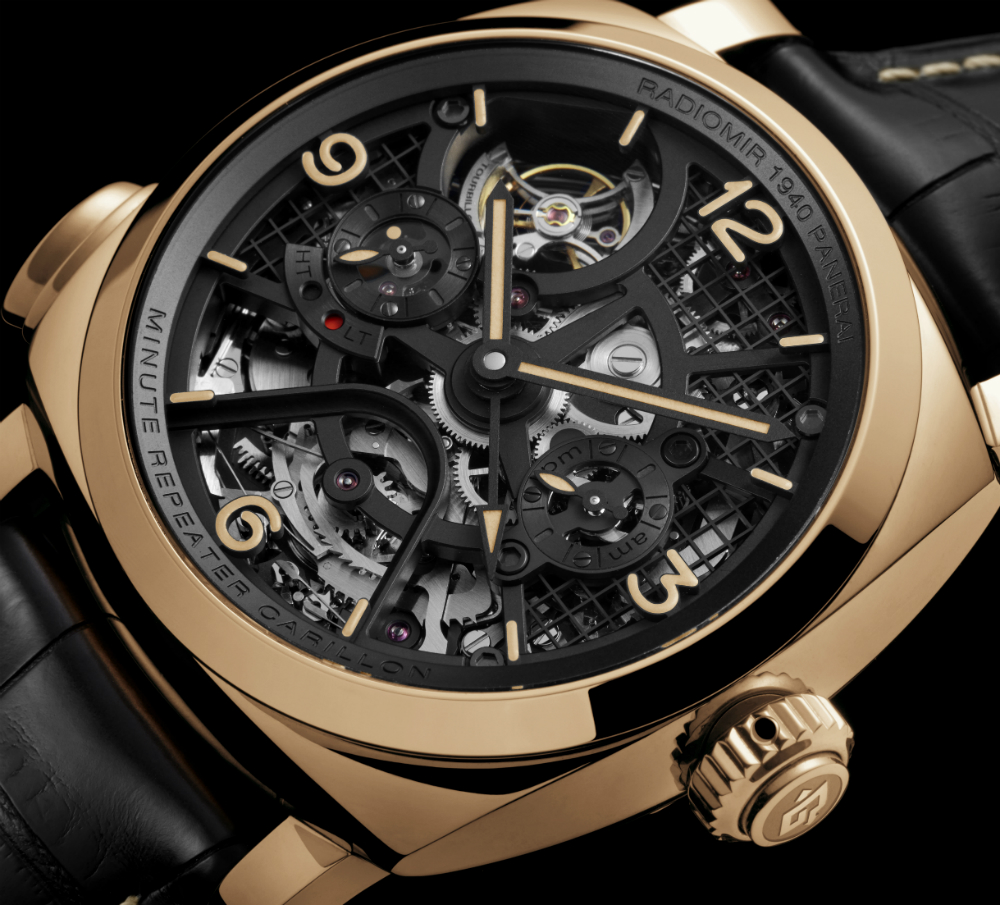 Breaking the mold by incorporating two minute repeaters for local time and a second time zone, the Panerai Radiomir 1940 Minute Repeater Carillon Tourbillon GMT employs three hammers to achieve a melody. Initiated via a push-piece at 8 o’clock, the repeater here packs three hammers rather than the traditional two, to allow a combination of tones with the lowest timbre indicating the hour while the highest and latter tones indicate the minutes. In traditional repeaters a triple chime usually indicates a fifteen minute passage but the Carillon utilizes a decimal repeater which chimes 10 minute increments. So, for example a traditional minute repeater would chime 10:28 as ten chimes for the hour, followed by one chime for 15 minutes, followed by 13 chimes for individual minutes. Here, 10:28 is 10 chimes for the hour, two triple chimes, and 8 individual chimes. Note that they decided to use “triple chimes” for the second chime indicating 10-minute sets.

Hilariously, Panerai says this use of a decimal repeater “corresponds to customary ways in which time is now indicated by digital watches.” That’s right, Panerai just cited digital watches as, at least partly, being behind behind their logic in the making of a minute repeater watch. 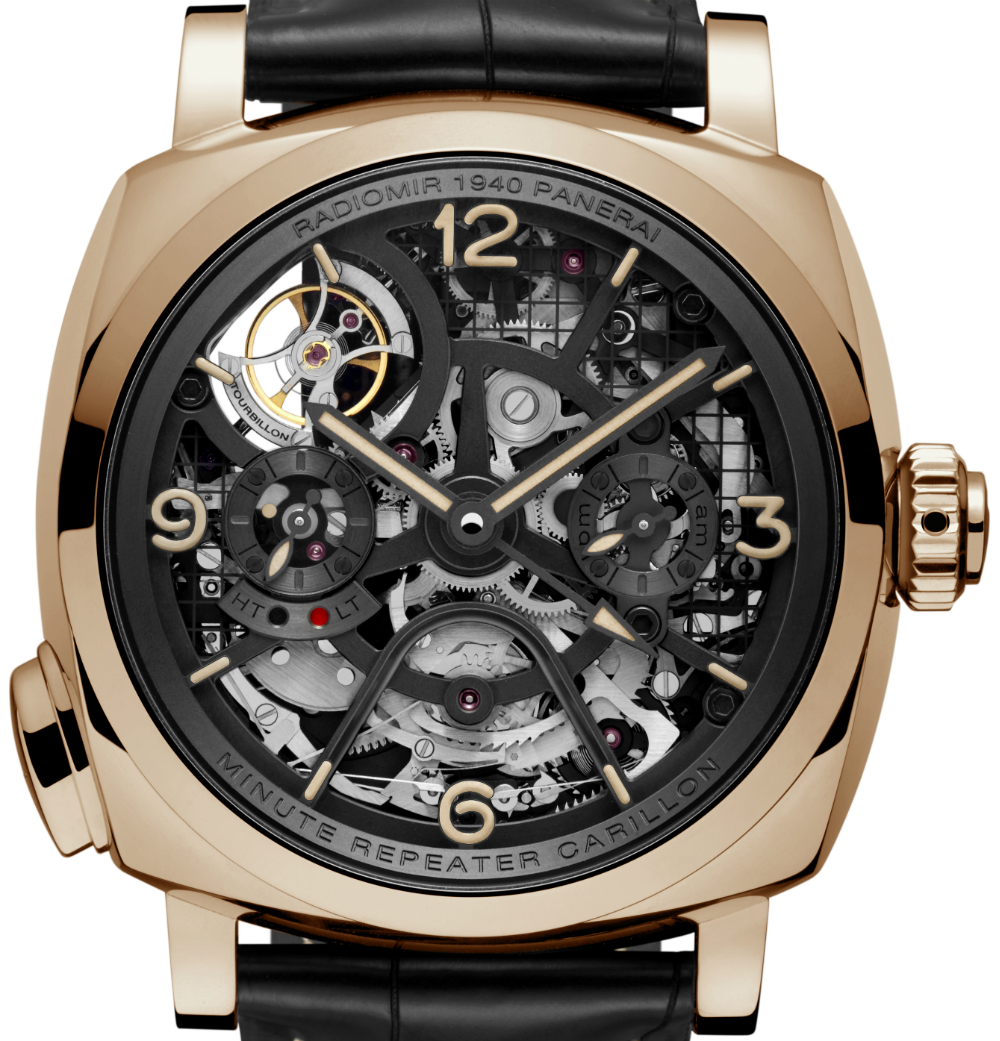 As part of their plans for the near future and in alignment with the upcoming “Dive Into Time” event which will be held in a former crypt at the Museo Marino Marini in Florence, Panerai clearly sees this piece as a milestone for the brand. Obviously the familiar and iconic Panerai cases are instantly recognizable, so the the traditional Radiomir case shape is retained and done in red gold with a skeletonized dial. 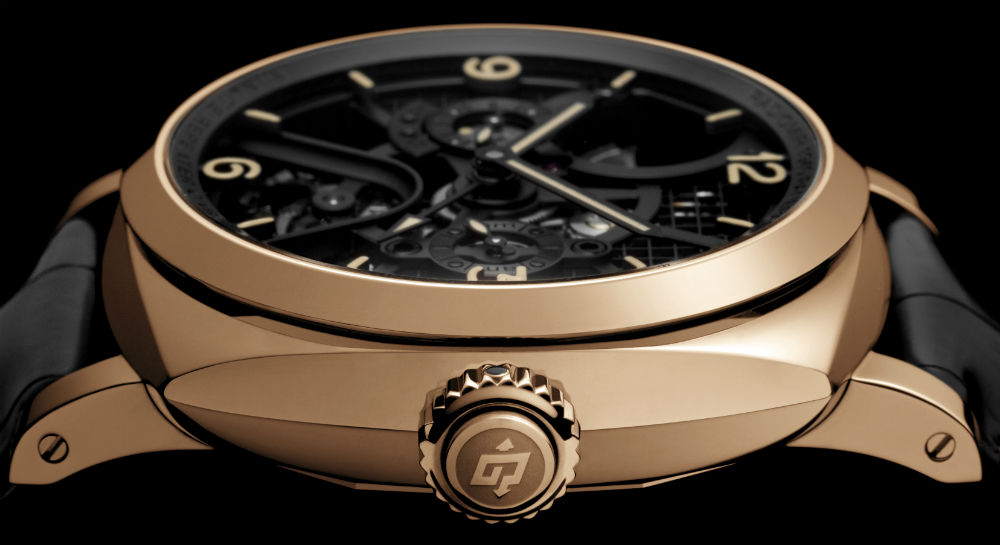 The  Panerai Radiomir 1940 Minute Repeater Carillon Tourbillon GMT sits atop your wrist at  49mm wide and  in 18k red gold with a platinum alloy which promises to ensure superb resonance. The case is actually two pieces which have been individually crafted before being soldered together and as a result, each watch will have its own unique reverberation. Even though they could probably get away without it here, the hands and indexes are coated with Super-LumiNova® like any good Panerai to ensure legibility. Water resistance for the Carillon is 30 meters, if you were curious. 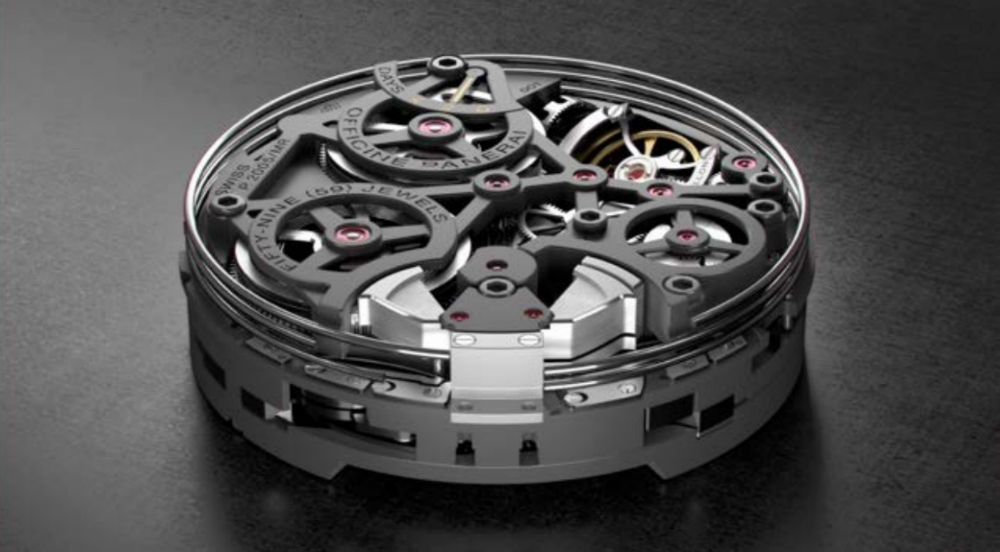 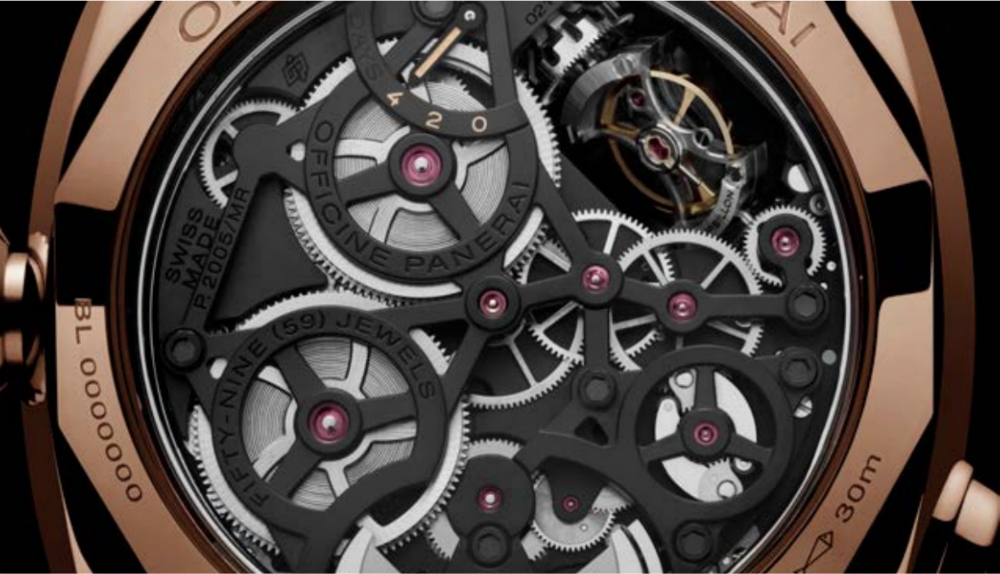 The black skeletonized dial allows a close-up view of the hand-wound P.2005/MR which is four years in the making in the Laboratorio di Idlee in Neuchâtel Manufacture. Not content to rest on their laurels, Panerai has included their tourbillon regulator that operates a little differently than most. Rather than rotate on a parallel axis, as most tourbillons do, this one does so at a perpendicular axis and completes its rotation every thirty seconds.  Panerai claims this allows for an accurate experience while compensating for any changes in gravity or shock. The P.2005/MR contains two spring barrels and has a power reserve of 96 hours that is monitored with an indicator through the sapphire crystal back. 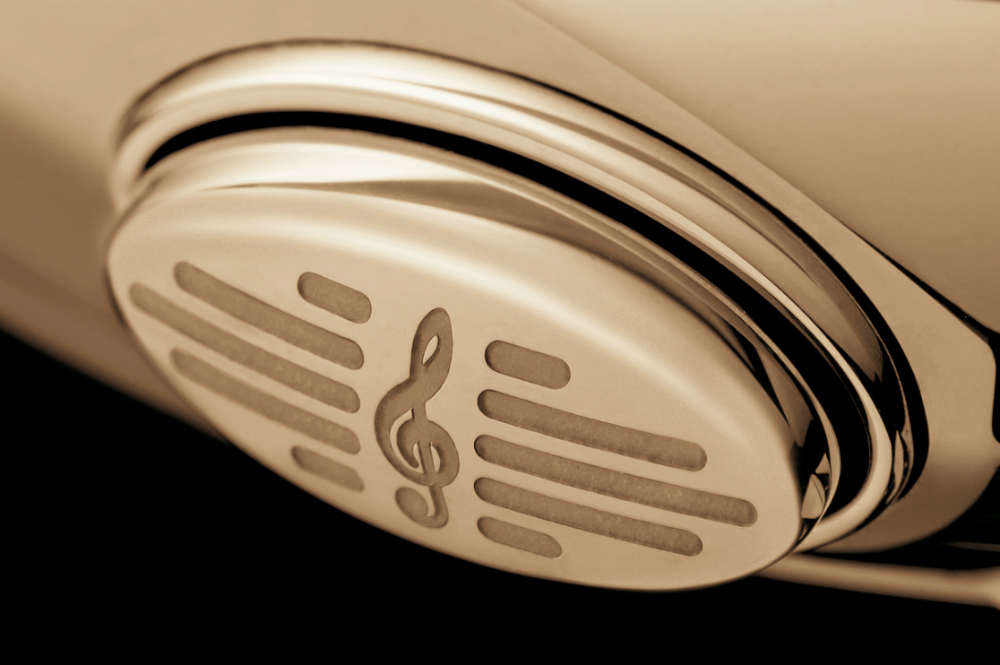 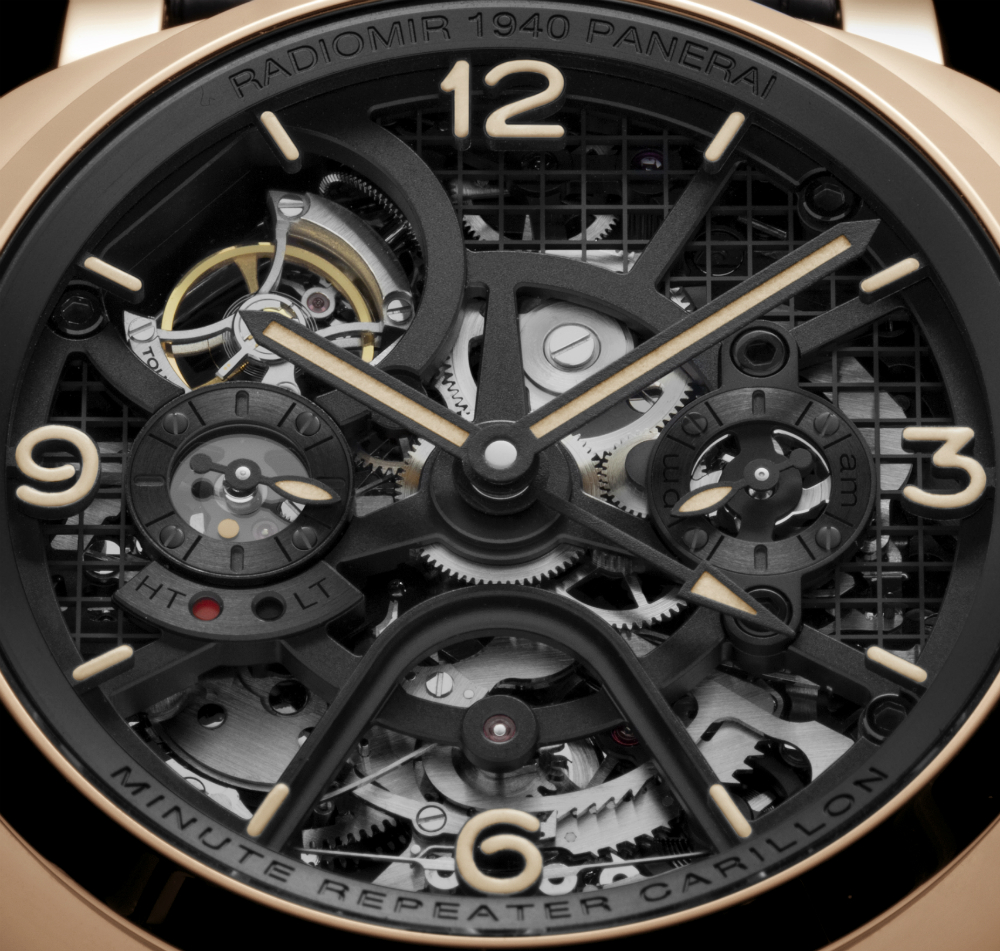 As previously mentioned, the Panerai  Radiomir 1940 Minute Repeater Carillon Tourbillon GMT will be limited edition pieces that are made to order. Buyers will be able to customize aspects of it to achieve a relative degree of personalization. Price, again, starts at just around $400,000 for the “standard” version you see in the images here. panerai.com