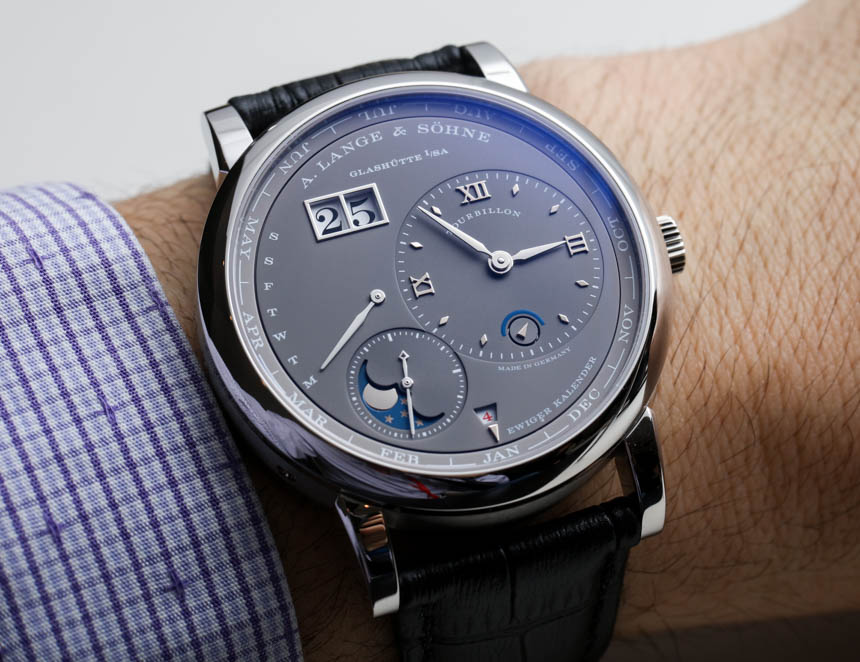 Deciding to acquire an A. Lange & Söhne Lange 1 Tourbillon Perpetual Calendar watch begins with a very basic premise: that you have tourbillon money but don’t want the wearing experience of an exposed tourbillon watch. For the last 10-15 years, the tourbillon-equipped timepiece has been a symbol of money and status among the world’s elite who rely on their watch to help communicate something important about themselves. Reports of corruption in China and Russia often detailed politicians and other public figures who were “caught” in public wearing lavish tourbillon timepieces they should not have been able to afford on paper. The tourbillon wrist watch began as an exercise in technique and craftsmanship, but for the above reasons, it sometimes presents issues even among those that can afford them. 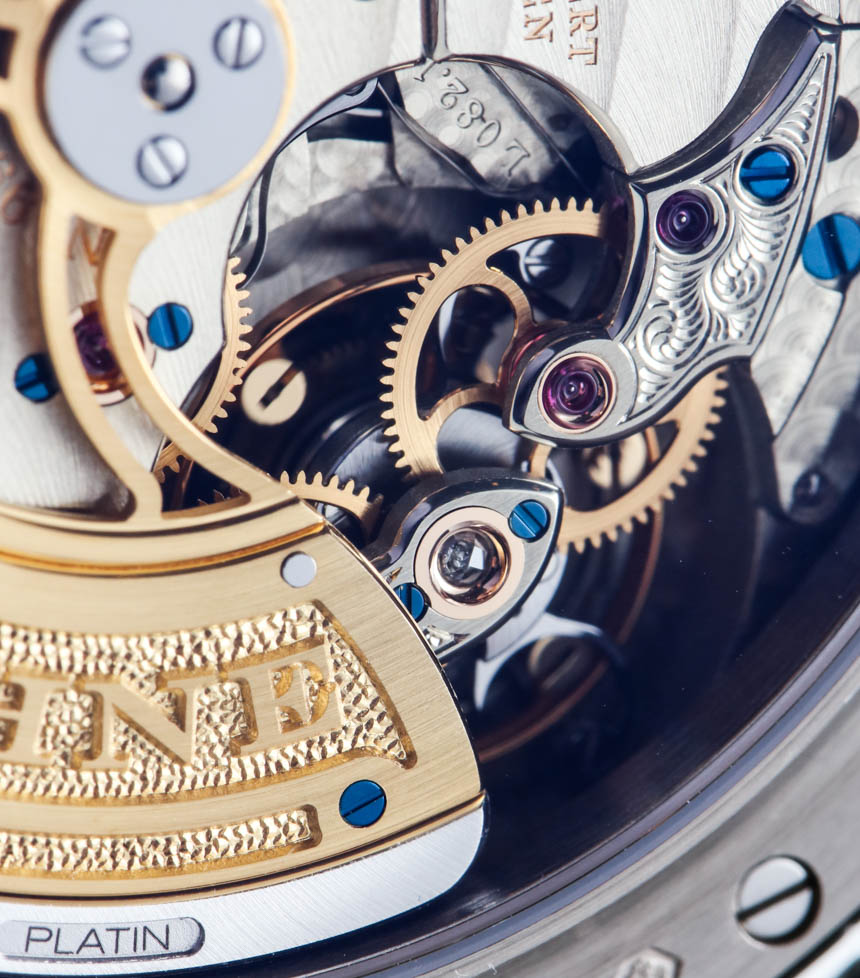 For this reason, I find it fascinating to write about tourbillon-based timepieces which don’t conspicuously show off their tourbillons through exposed windows on the face. Of course, the visual merit of a tourbillon is its elegant mechanical operation, but in timepieces like the A. Lange & Söhne Lange 1 Tourbillon Perpetual Calendar, you can simply take off the watch and appreciate the delicate movement of the spinning regulation organ as part of experiencing the totality of the movement. 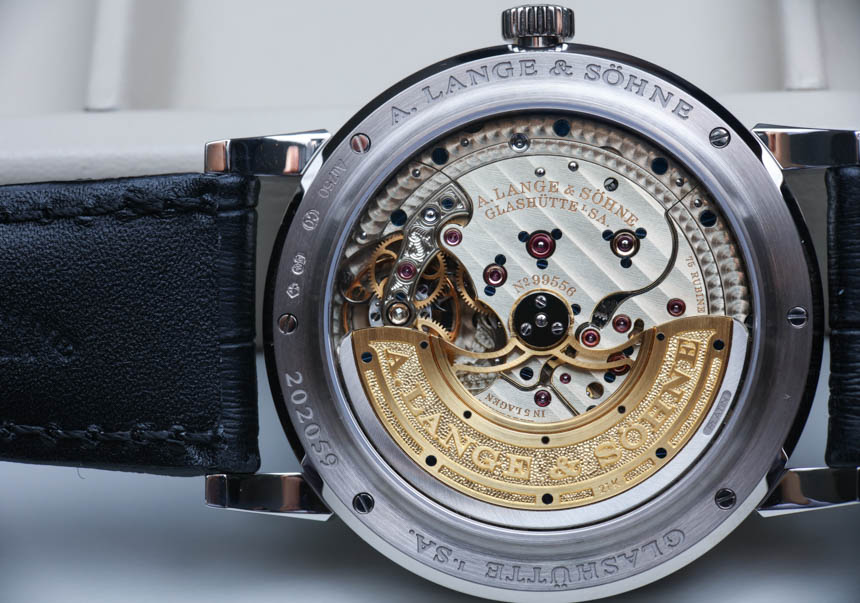 I would almost prefer that A. Lange & Söhne remove the label “Tourbillon” from the dial to complete the “stealth wealth” effect the German high-luxury watch brand is often known for. A few months ago, around SIHH 2016, I debuted this reference 720.038F A. Lange & Söhne Lange 1 Tourbillon Perpetual Calendar watch here. At the time, I called it “perhaps my favorite new A. Lange & Söhne watch of SIHH 2016.” After some hands-on time, I can verify that this version in 18k white gold with a gray dial A. Lange & Söhne Lange 1 Tourbillon Perpetual Calendar watch (originally released in 2012) certainly satisfies, despite the natural niche appeal that it will have. Well, perhaps “niche appeal” only in the strictest of senses because, as I mentioned earlier, buyers of this watch not only need the ability to afford a $300,000-plus timepiece, but also need to harbor the desire to want one that tries hard not to be showy and look like a $300,000-plus timepiece. 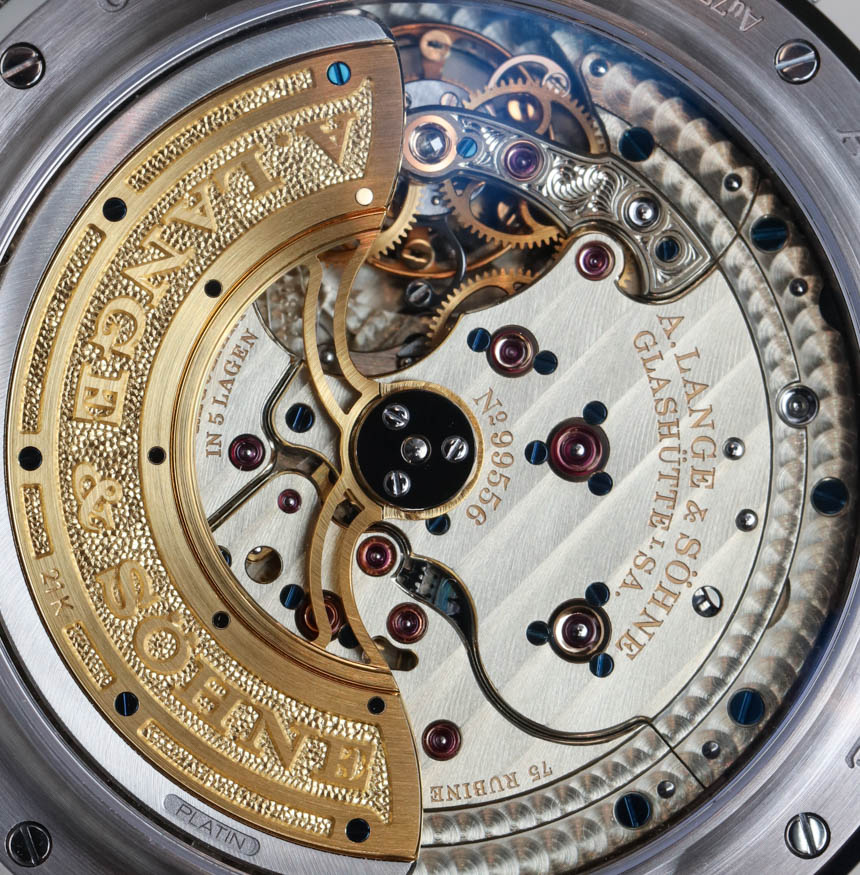 It isn’t that I admire the A. Lange & Söhne Lange 1 Tourbillon Perpetual Calendar watch only because it is subdued in style and has a tourbillon “hidden” on the back of the watch, but also because it is a comfortable and convenient daily wear. I would argue that the majority of “super watches” priced at these levels are luxury novelty items meant to wow and amaze versus offer what we might call “practicality.” Even from a fashionable perspective, the 18k white gold case and gray dial go with many clothing options. Gray simply has that nice level of versatility, and on this version of the A. Lange & Söhne Lange 1 Tourbillon Perpetual Calendar also results in a dial that is very legible. 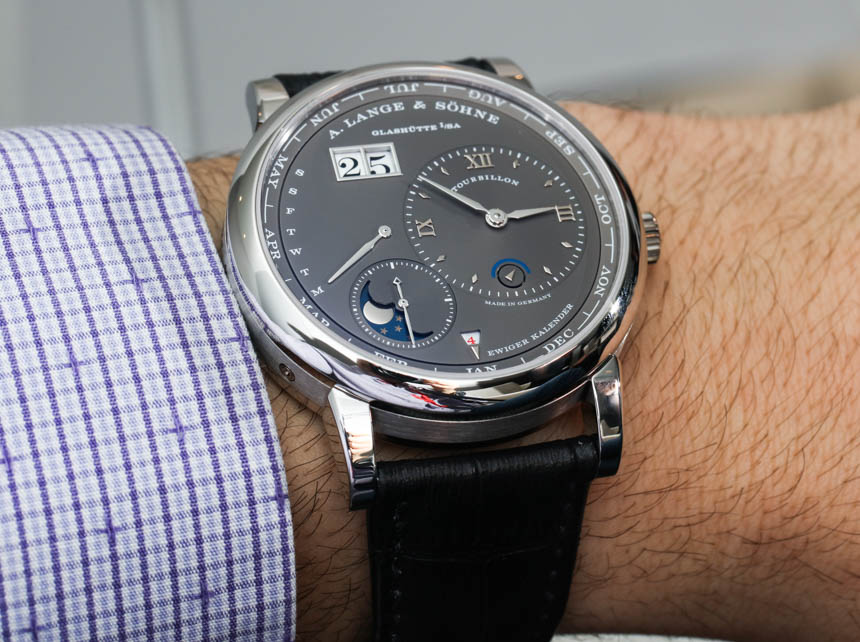 In this watch, A. Lange & Söhne wanted to create a high-end, yet very useful perpetual calendar watch that exists as a decadent flavor within the Lange 1 family. Automatic-winding Lange 1 models are rare enough. The in-house-made caliber L082.1 movement is more than just a lavishly decorated German machine. It combines a distinctive and attractive layout bristling with A. Lange & Söhne DNA, and also happens to tell you the time and calendar information with ease. 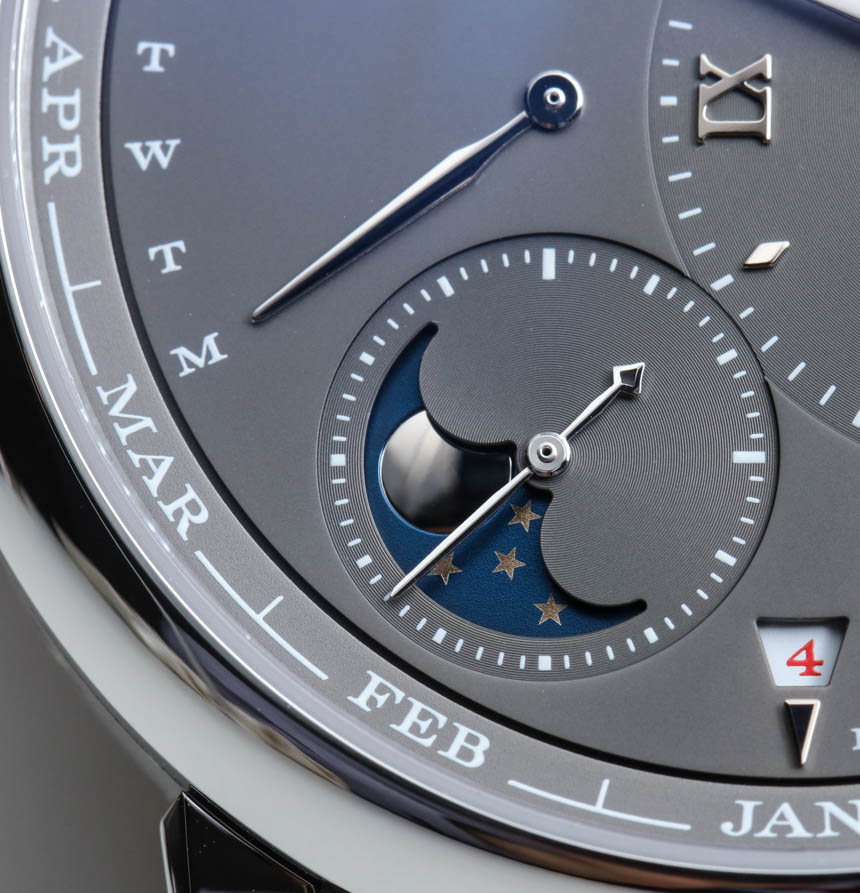 A key ingredient of the dial’s success is the relative lack of overlapping elements. Many watch faces with complex assortments of hands and dials tend to have elements which pass over one another or overlap. Aside from a few little things such as the day/night indicator in the dial for the time, and the moon phase indicator being part of the subsidiary seconds dial, Lange does a good job of allowing each of the A. Lange & Söhne Lange 1 Tourbillon Perpetual Calendar’s complications to inhabit its own zone. This really increases legibility as well as dial design harmony, and your eye knows where to go whether you want to look at the date, time, day of the week, etc. 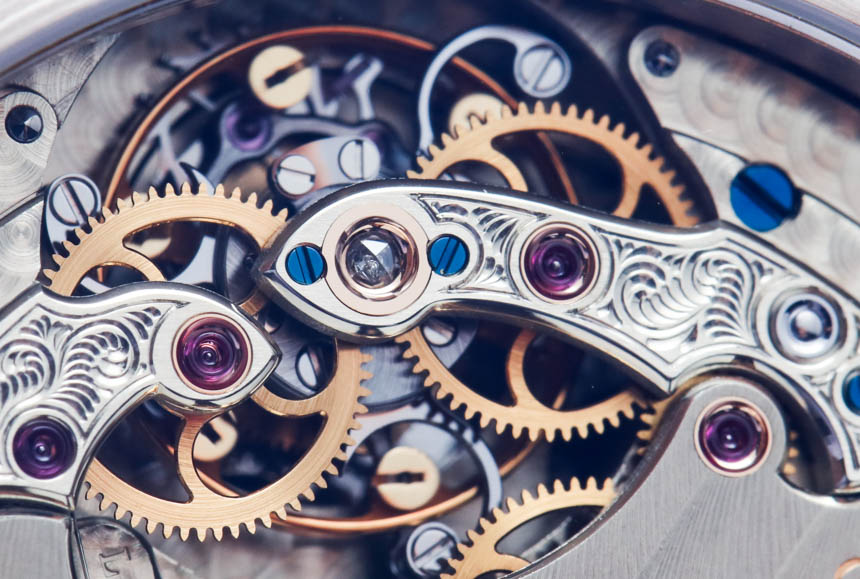 Lange’s dial design is still clever for how it offers all the perpetual calendar information using a combination of dials and windows. The day of the week uses a simple retrograde hand while the date, of course, is maintained within the big date indicator. The relatively inconspicuous dial around the periphery of the face is used to indicate the month, which is indicated by an arrow at the bottom of the dial over 6 o’clock which also happens to incorporate the leap year indicator. It just all works out very well, and the information you want the most is often the most easy to see. 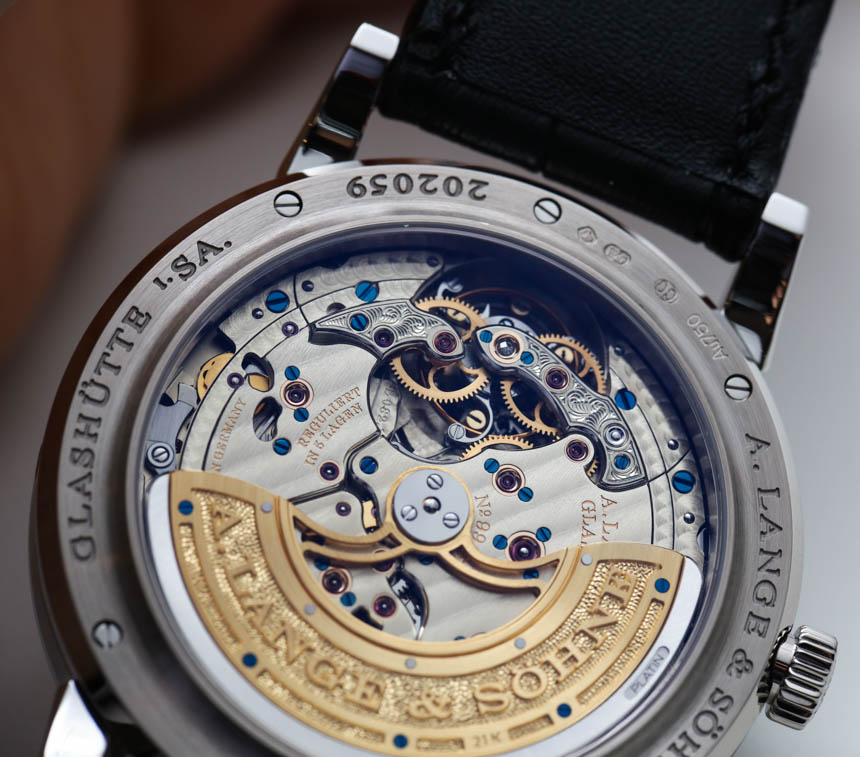 Produced in mostly German Silver with lots of gold, synthetic rubies, and blued-steel screws, the movement (as always) looks like a champ. Few can resist the appeal of an A. Lange & Söhne movement when they are presented with one – watch face down – in their hands. The automatic rotor is in 21k gold, made even more efficient (for winding purposes) with a solid platinum weight at the end. It really isn’t super easy to design automatic tourbillon watches, but Lange pulls it off well even though the emphasis on this timepiece clearly isn’t the tourbillon itself as a showpiece. 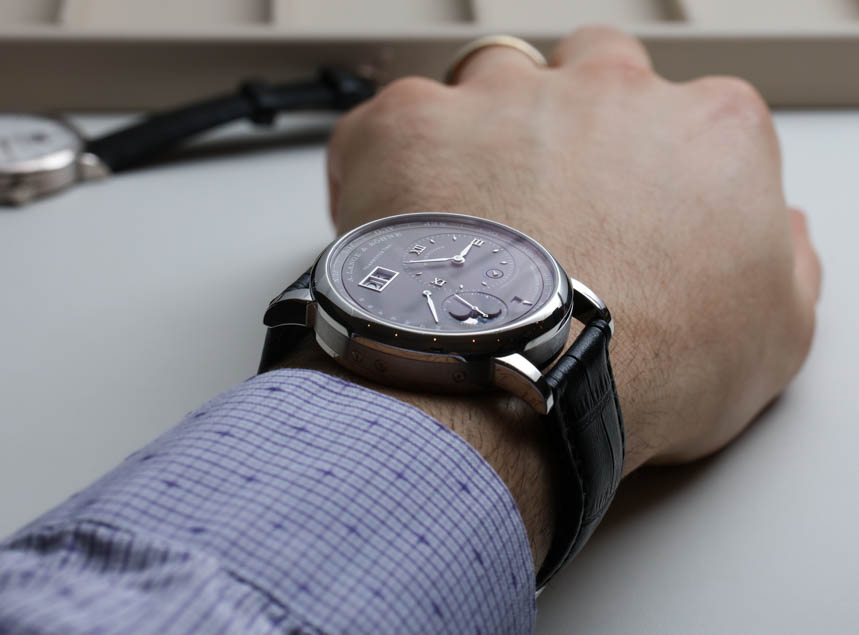 The tourbillon exists under some gears and hand-engraved bridges. It feels like a very functional tourbillon, offering increased complexity to the movement without removing from its performance or utilitarian value. Operating at 3Hz (21,600 bph), the L082.1 automatic movement is produced from 624 parts (a lot). Also note the diamond endstone used instead of a ruby in the palette over the regulation system. Fit and finish on the movement is in line with A. Lange & Söhne’s legendary reputation for detail and care. 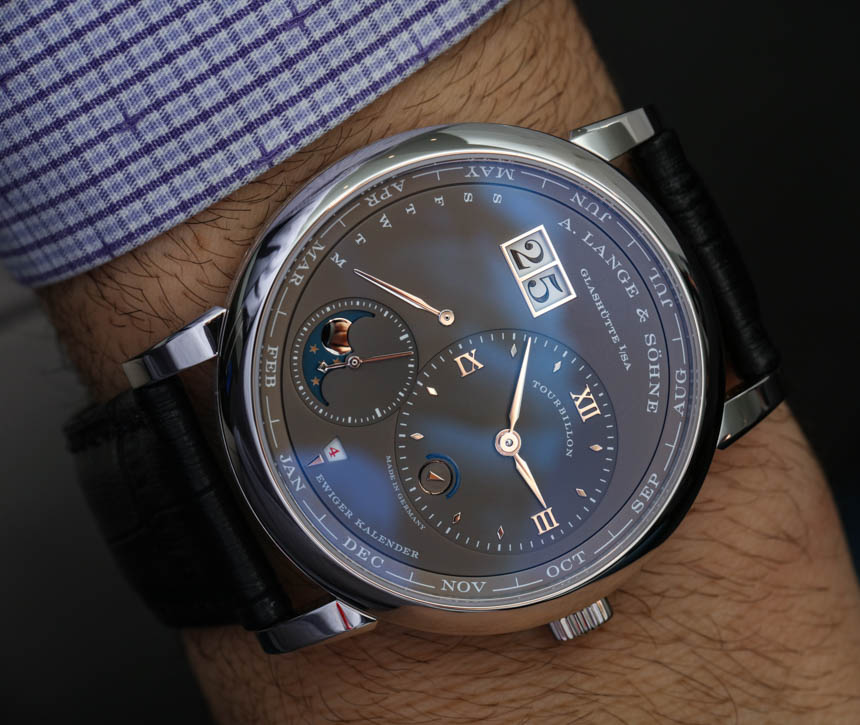 On the wrist, the A. Lange & Söhne Lange 1 Tourbillon Perpetual Calendar watch is technically considered large for a Lange, but it isn’t too sizable at 41.9mm wide. It is also just 12.2mm thick, which is relatively slim given the complexity of the movement and the sheer number of parts it has. The 18k white gold case is of course finished well, but nothing about the watch yells “money.” Rather, the overall composition of the watch is demurely refined and conservatively timeless with enough “design controversy” to make it an excellent fit for those who want something out of the ordinary. This is truly a timepiece for a watch aficionado who isn’t looking to impress anyone save for those who have the exact same values. Price for the A. Lange & Söhne Lange 1 Perpetual Tourbillon reference 720.038F watch is 315,900 euros. alange-soehne.com