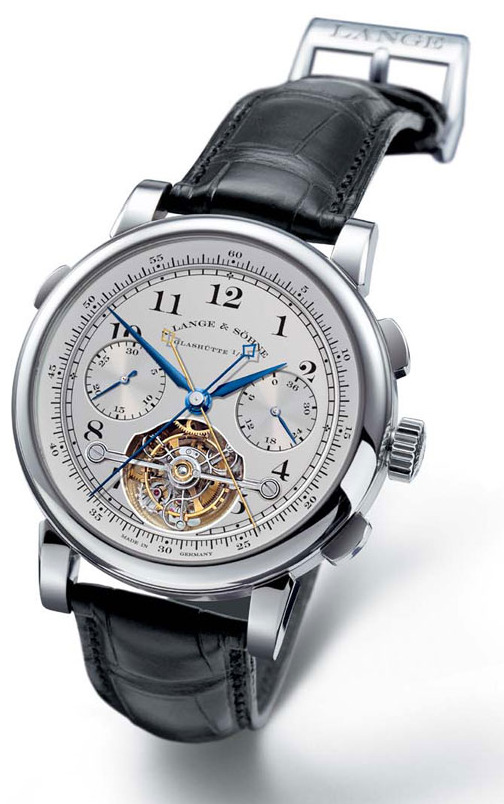 Here is something you don’t see everyday. The Toubrograph “Pour le Merite” by Saxony’s A. Lange & Sohne was the second watch by the high-class watch maker to bear the “Pour le Merite” badge. The available model is of the rarest, in platinum, with just 51 pieces made. The watch was released in 2005 with an incredible reception. Despite the fact that A. Lange & Sohne watches are often very similar in character, it is the small differences that each new model bears that are intriguing. The watch company defines conservation, when it comes to keeping high-end watch making a purists’ art form.

The Tourbograph “Pour le Merite” features a world’s first combination of desirable complications. It had a one minute tourbillon, a fusee and chain escapement, and a rattrapante chronograph, along with a power reserve indicator. All in a very simple looking, but mechanically complex package. The watch itself has over 1000 parts inside, each carefully finished by hand. The split second or ‘rattrapante’ chronograph is a 30 minute counter that can split between two time. That is why the watch has two chronograph seconds hands. Manufacturing, decorating, constructing, and testing of each tourbograph “Pour le Merite” watches takes well over a year. So even though the limited edition was release in 2005, Lange is still likely making them today, even with such a limited run.

Despite the ultra luxury status of the watch, when you handle it, you don’t immediately think “I should really be careful with this.” It doesn’t come across as delicate, but rather as a very well put together watch utterly capable of being worn and relied upon daily. Given its value, and the fact this this is what I call an “investment grade” watch, I wouldn’t recommend wearing it so often though. Right now, one of these very rare A. Lange & Sohne Tourbograph “Pour le Merite” watches is available on JamesList. Price? Well it is high, very high, but this is the type of watch that can command such a value. Like I said, they are investment grade watches meaning that they are among the few watches in the world with the ability to appreciate in price. The watch is being offered now at about 685,000 Euros.