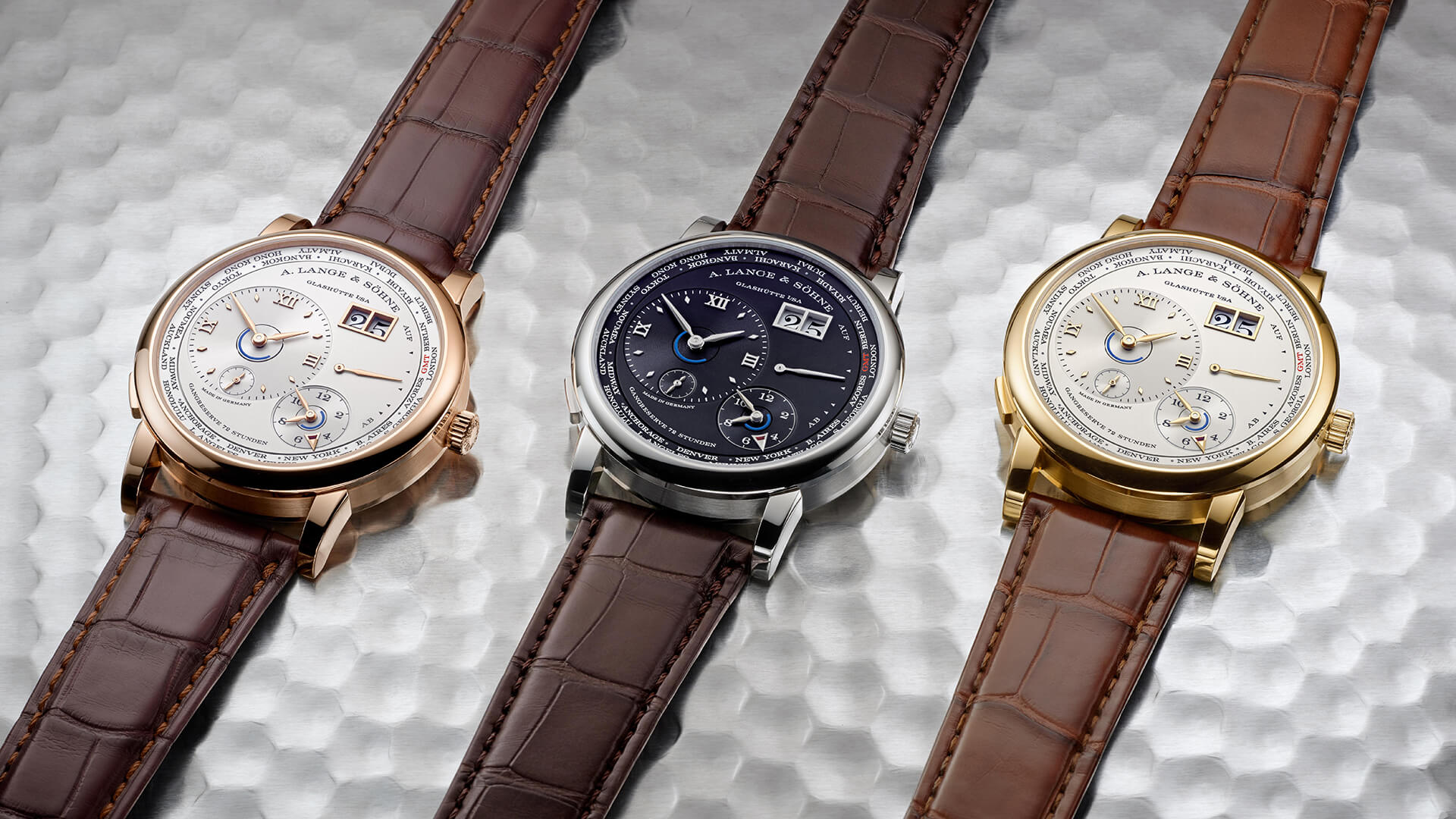 As a staple of A. Lange & Söhne’s lineup since 2005, the Lange 1 Time Zone has long had a devoted following among fans of the brand, combining twin time zone functionality with the marque’s balanced and precise aesthetic. For 2020, the German manufacturer has returned to this classic line for a substantial redesign, creating a cleaner and more focused design with a brand new in-house movement. Available in white gold, pink gold, or a limited edition yellow gold variant, the new A. Lange & Söhne Lange 1 Time Zone is a handsome refinement of a modern classic series. 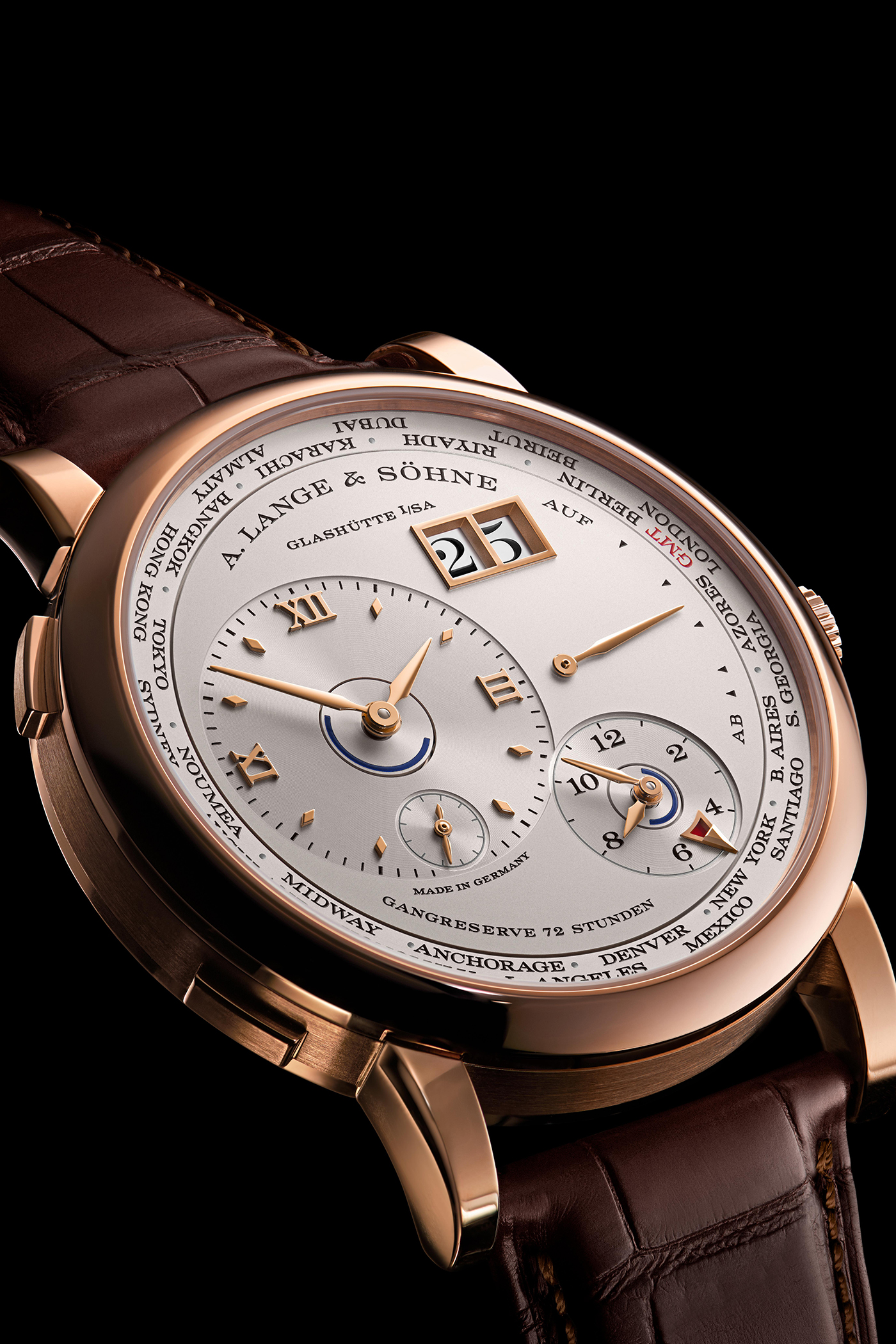 The case dimensions of the new A. Lange & Söhne Lange 1 Time Zone should feel familiar to the brand’s faithful, as the 41.9mm diameter and 10.9mm thickness remain unchanged from the previous generation. The overall case design captures the crisp Teutonic classical style the marque does so well, with short wide set lugs, and a mix of polished surfaces with a finely brushed central case band. With a simple overall form, the variety of case metals dramatically alters the overall feel of the case design. The white gold variant is undoubtedly the most reserved and contemporary, while the pink gold model feels warm and delicate by comparison. The limited edition yellow gold version, on the other hand, brings a more classical energy to the piece while also making the most eye-catching statement on the wrist. 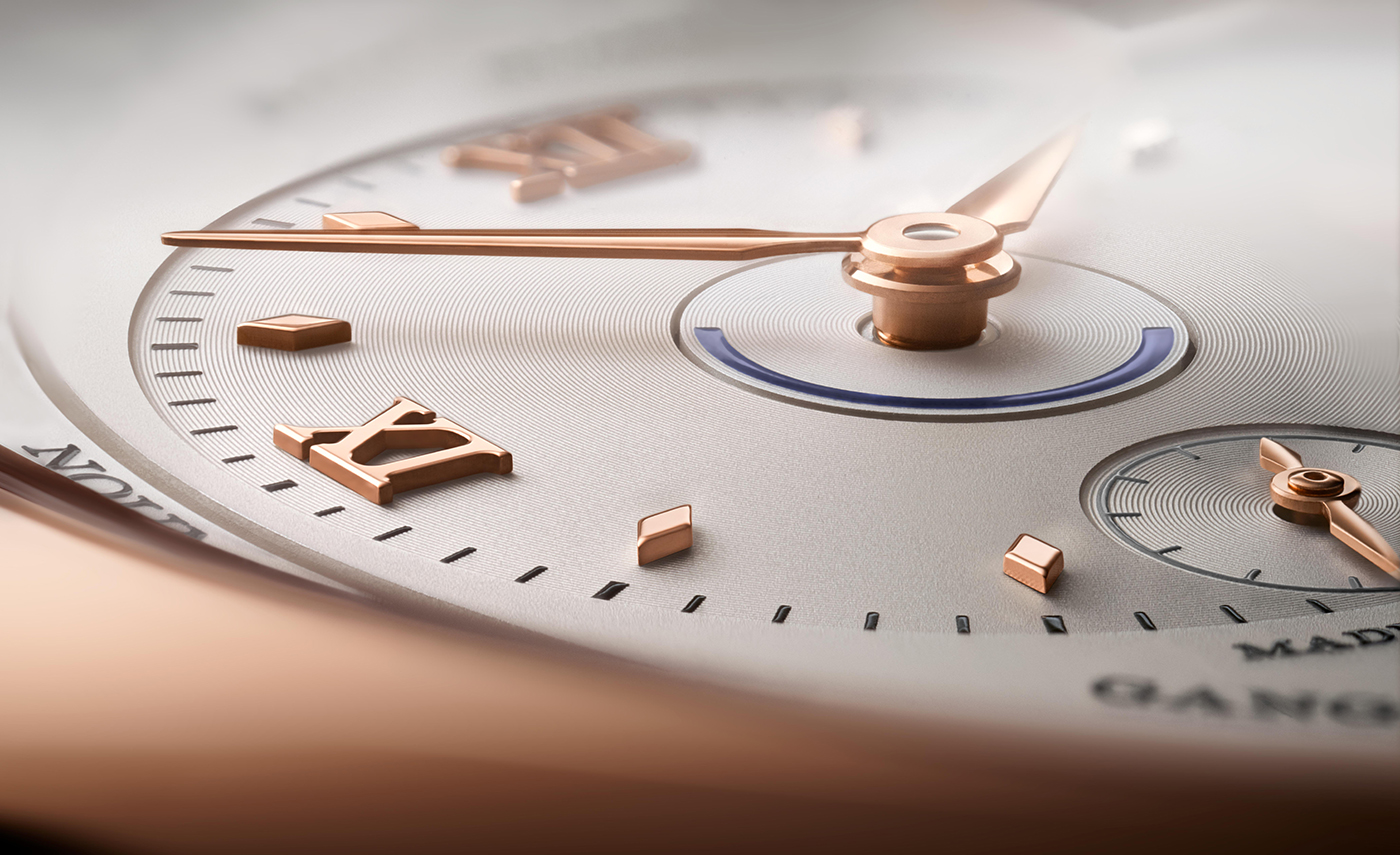 It’s not often that a watch with two separate time zone dials, a big date complication, an oversized power reserve indicator, and a world time ring appears open and balanced, but the dial of the A. Lange & Söhne Lange 1 Time Zone manages this feat with the brand’s typical formal visual style. The visual weight of each element is finely proportioned, drawing the eye naturally to the most relevant information, with a pleasing sense of scale reminiscent of the golden ratio. The home time subdial is by far the largest, embellished with snailing, applied markers and Roman numerals, as well as a miniature small seconds at 6 o’clock. The second time zone subdial is substantially smaller, differentiated further by its use of printed Arabic numerals. 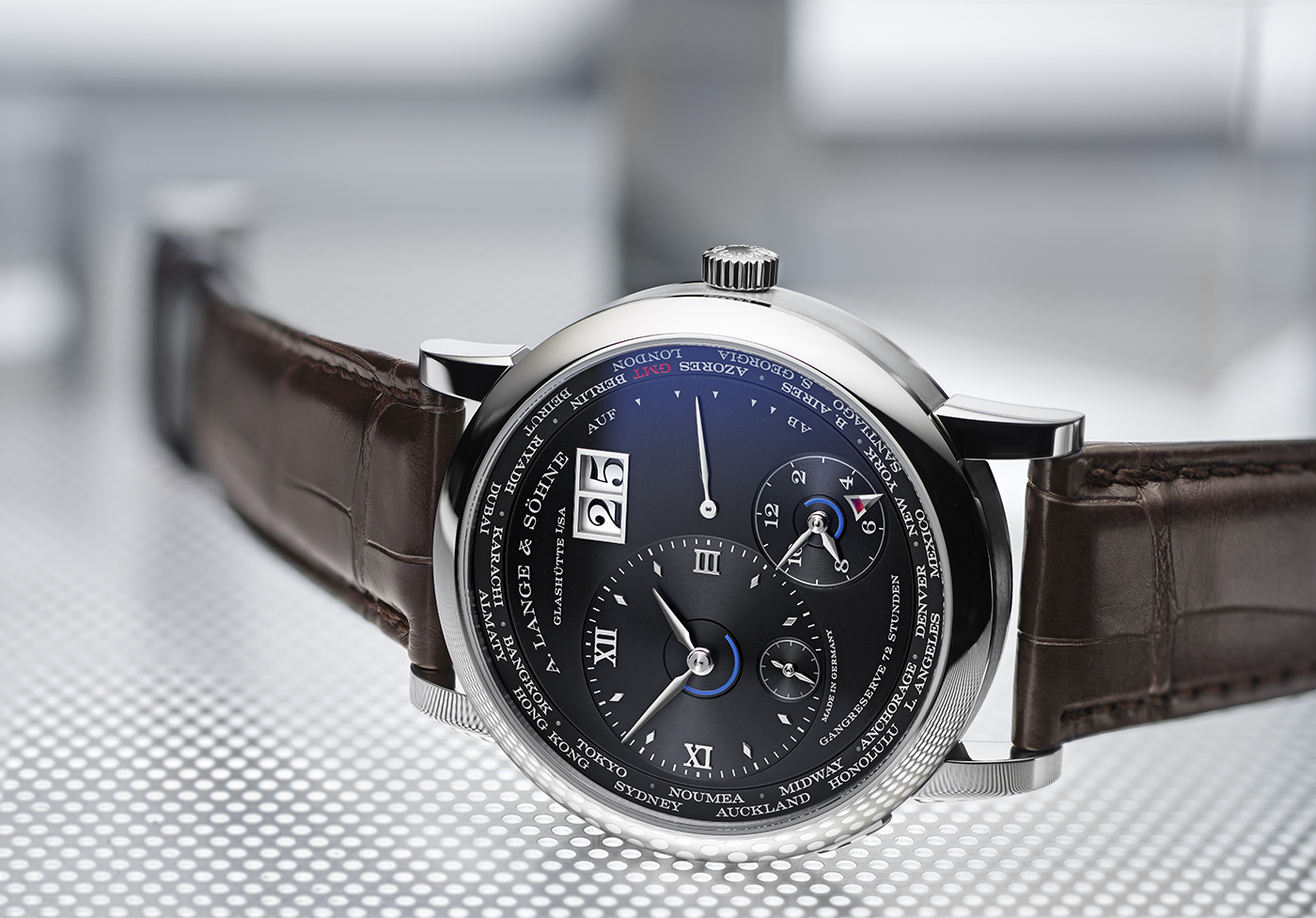 Both these subdials carry over the day/night indicators used in previous versions of the Lange 1 Time Zone with a new and far more streamlined execution. While earlier models used a separate 24 hour arrow hand on each subdial to indicate day and night, this new version opts instead for a simple rotating blue semicircle at the center of each. As this semicircle makes a full rotation every 24 hours, the hour hand will only overlap it between the hours of 6 o’clock PM and 6 o’clock AM. The other major new addition to the dial of the Lange 1 Time Zone comes at 5 o’clock on the second time zone subdial. This arrow shaped window marker serves two purposes, in keeping with the streamlined and elegant design philosophy at play here. The first and most important of these is as an instant legibility aid for the outer rotating world timer ring, as whichever city the arrow currently points to will correspond to the time zone displayed on the smaller subdial. By using the corrector pusher at 8 o’clock, the city ring will advance by one time zone and the hour hand of the second time zone subdial will advance by one hour, allowing for easy one-touch adjustments to be made for travelers. The second use of the arrow shaped window is as a daylight savings time indicator. If the window displays red, the current time zone selected uses daylight savings time, which must be compensated for manually by the wearer during those months. Of course, building an automated mechanical daylight savings time adjustment into a timepiece would be monstrously complex, especially for one like this without a perpetual calendar, but it bears mentioning as a “first world problem” for wearers. 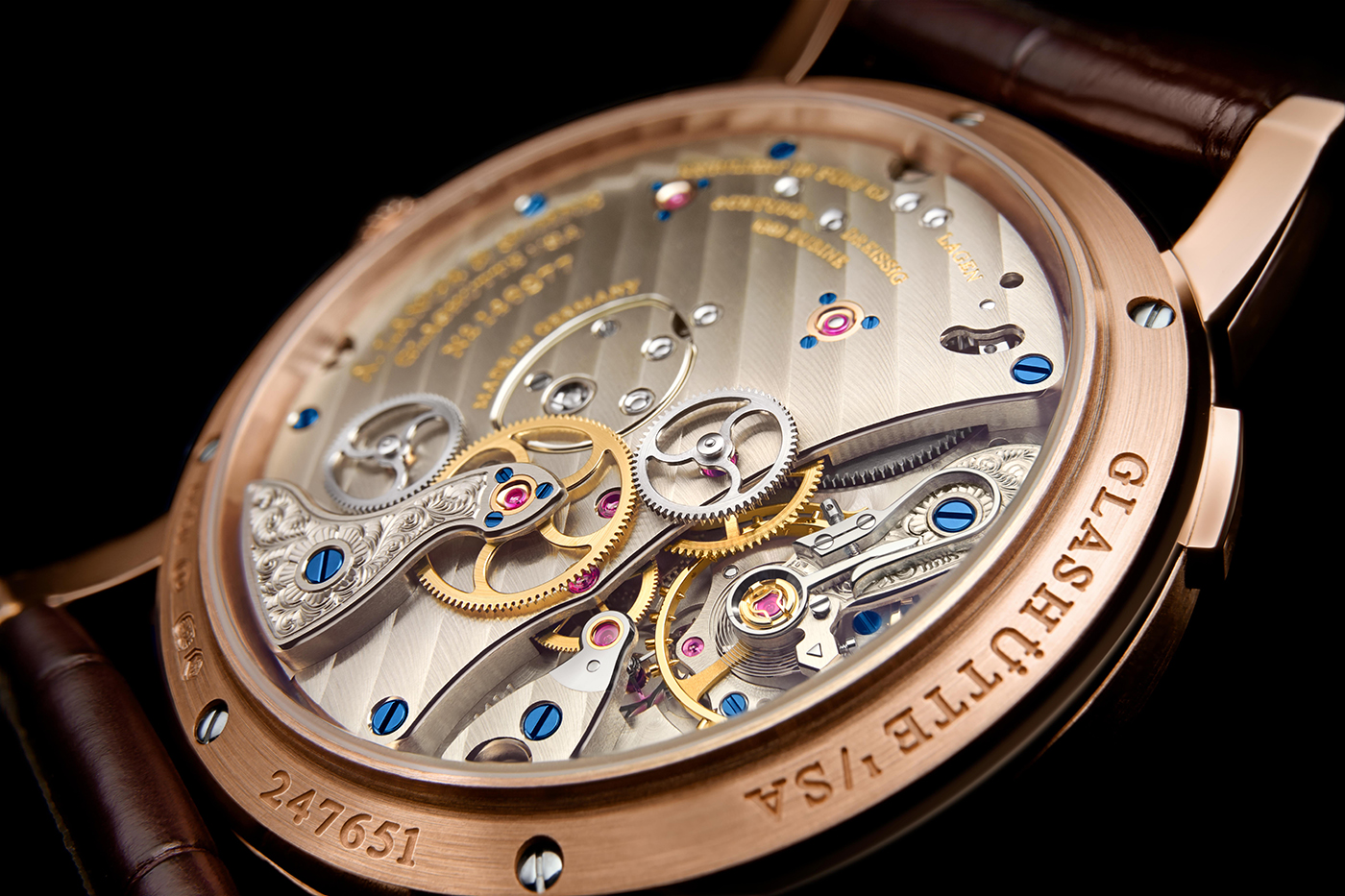 This new generation of A. Lange & Söhne Lange 1 Time Zone models sees the introduction of the new manufacture handwound L141.1 movement to the line. Like the case and dial, the presentation of the L141.1 movement is classic Lange. It features hand decorated three quarter plates and bridges in untreated German sliver visible through a wide sapphire display caseback, along with finely engraved balance and intermediate wheel cocks. Beyond the decoration, however, the L141.1 makes a handful of technical improvements over its predecessor. The movement boasts an impressive 72 hour power reserve from a single mainspring barrel, a steady 21,600 bph beat rate, and a screw balance utilizing an in-house freely oscillating balance spring for superior shock resistance. The L141.1 also maintains the easy swapping synchronization mechanism of its predecessor, allowing users to easily trade time zones between the main and second time zone dials with a combination of the crown and the 8 o’clock pusher. 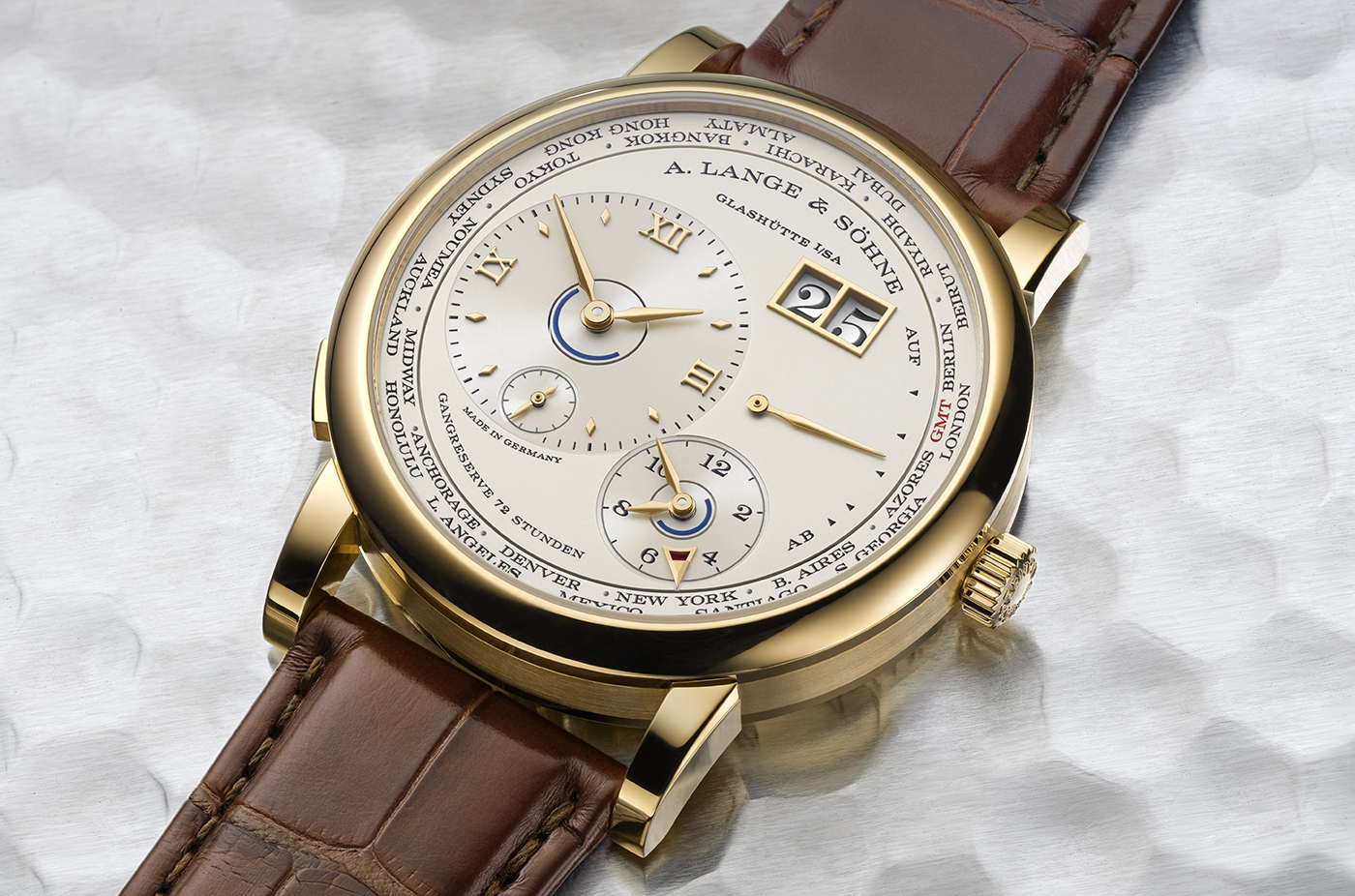 In keeping with the imperious, classical feel of the rest of the design, A. Lange & Söhne pairs all three variants of the new Lange 1 Time Zone with hand-stitched alligator leather straps in complementary shades of brown. For the white gold and black dial model, the deep tobacco brown helps to reinforce the stolid, serious nature of the A. Lange & Söhne aesthetic. The medium mahogany brown used for the pink gold variant, on the other hand, feels suitably timeless with a touch of approachable masculinity. Lastly, the lighter honey brown chosen for the limited edition yellow gold version brings out the warmest, most brilliant tones in the case metal. 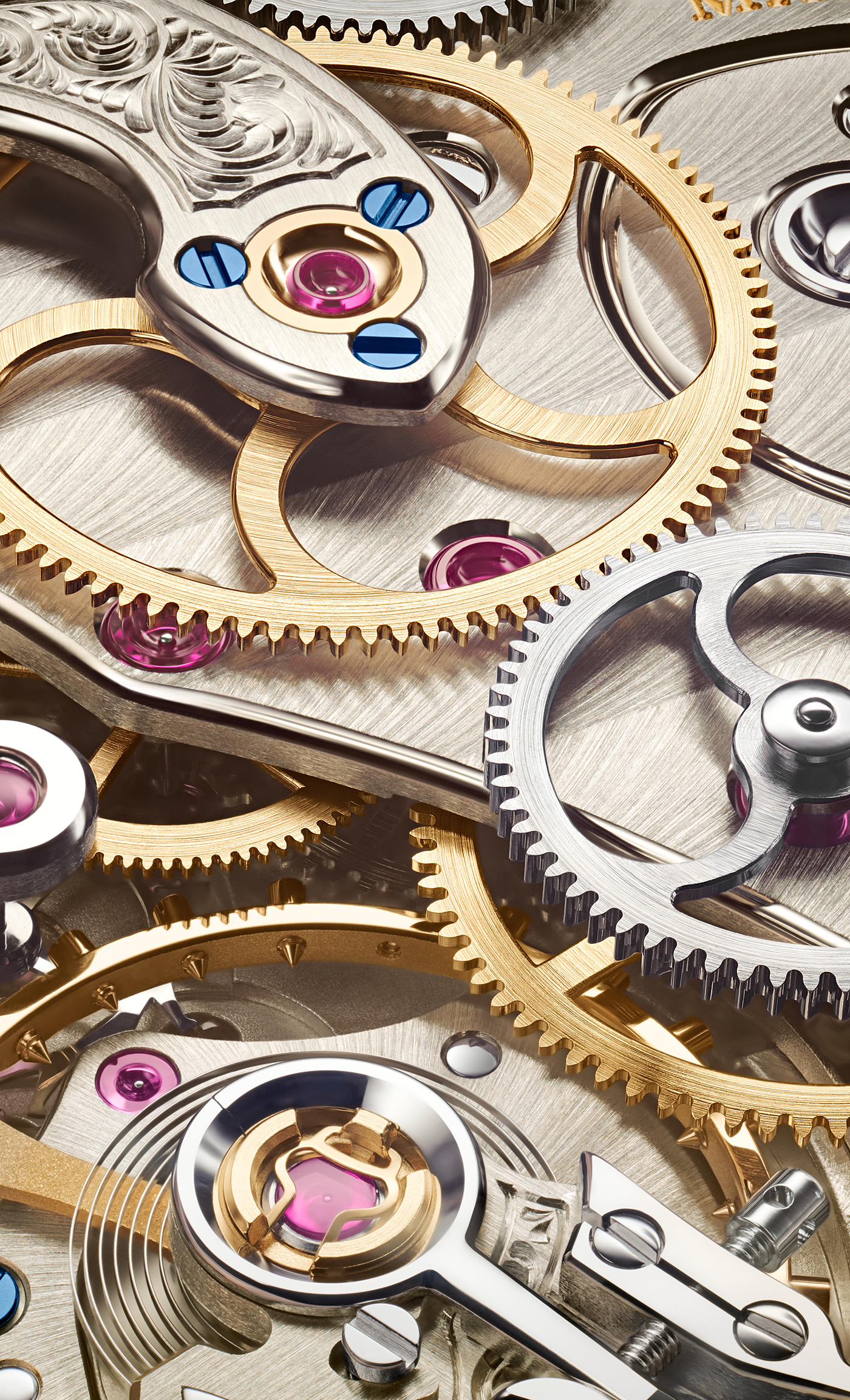 With the updated A. Lange & Söhne Lange 1 Time Zone, the brand has substantially refreshed one of its cornerstone models for a new decade. This redesign creates a more unified and streamlined design, while adding useful functionality and a stunning new manufacture movement. All three variants are available now, with the yellow gold model limited to 100 pieces and only purchasable through the brand’s boutiques. MSRP for the A. Lange & Söhne Lange 1 Time Zone stands at $52,900 for the white gold and pink gold variants, with the yellow gold limited edition priced at $56,100. For more information, please visit the brand’s website.