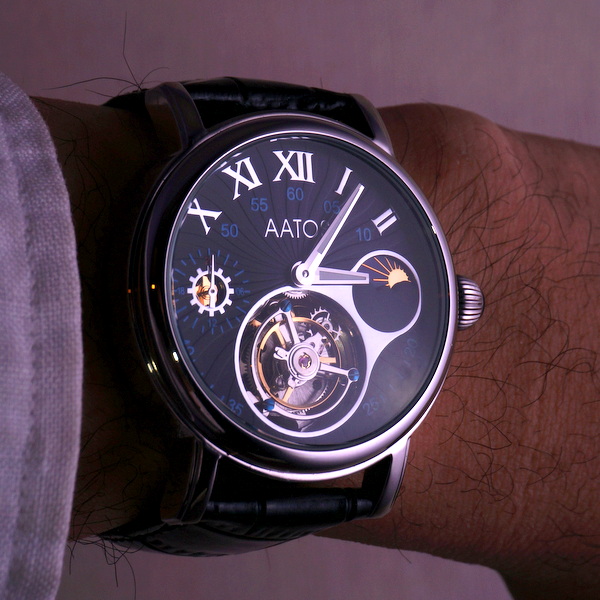 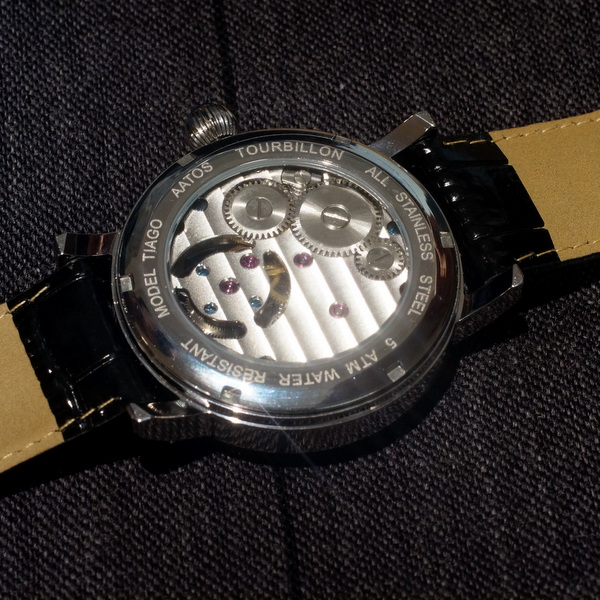 The movement contained within is a PTS 3310, a Breguet style centre tourbillon and one of the few movements that exist from various Chinese manufacturers that can be found in watches of this ilk, branded with European sounding names suggesting a German origin. Although to the credit of AATOS, there is no mention of origin on the case or on its Amazon page. This is infinitely preferable to having the half truth of “German Made” or “German Design” on the watch as is the case with many others watches of this type. 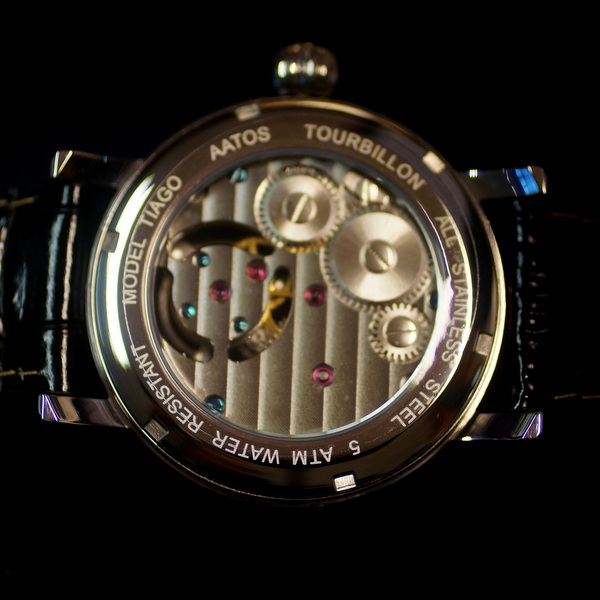 Beating at 28,000 bph and at 33mm in diameter and 6.45mm thick, this movement has been reported as being reliable by various users on the Watchuseek forums, suggesting that it is tough enough as a daily wearer. Coming with an Amazon backed warranty how can you lose?

In fact, I made it a point to bring this watch around during my visits to various high end watch-makers to get their opinion. The general consensus was that it was really quite amazing that a tourbillon could be produced at that price, and some of the possible ways that this was achieved were with the low quality of materials, (the mineral crystal, leather strap, case and lack of finishing were pointed out), as well as the undeniably lower salaries in China versus Switzerland. 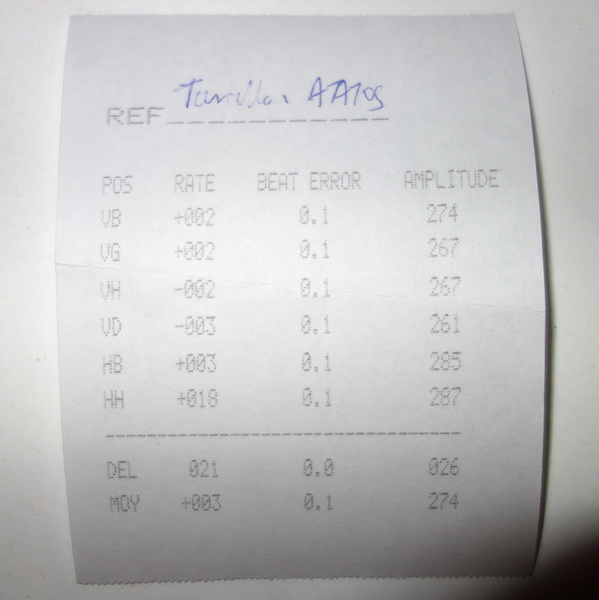 On a timing machine, the amplitude of the watch in the vertical positions was very good. However the dial up and dial down positions were quite bad indeed. Possible reasons given were friction from the cage, or that given it being a flying tourbillon, the adjustment process was more difficult with the cage being fixed at the bottom and not the top. It was interesting so see this being done, as being a tourbillon, they had to allow the timing rate measurement to take place over 60 seconds (instead of 10 seconds with a regular watch) in order to allow the gravity compensation to occur with the tourbillon making a complete revolution.

The general verdict given was that the movement was strong despite poor performance on the dial up and down positions. On the wrist however, I was told to expect a good timing performance as can be seen in the image of the results above. Not too bad for the little AATOS as pronounced by the tourbillon experts, some of whom have worked on nothing but tourbillons throughout their entire career.

But then now, we come to the biggest downside of the watch, and something that was mentioned again and again by the watch-makers. On the wrist and at reasonable viewing distances, I can safely say that the watch looks great. A closer look under a loupe reveals a different story.

If you are familiar with cheap Chinese watches you will know where I am coming from. Even though alignment of the markers was spot on in this example, there were random tool marks and scratches, uneven finishing and dust spots in the visible parts of the movement and the dial. Under high magnification, it is self evident that the watch was made for function first and foremost, and the aesthetics were taken care off to the limits of perception of the naked eye.

It makes you appreciate those videos you find on Youtube showing the movement making process of a top class Swiss manufacture. In my earlier days of learning about watches, I had often wondered why I would see a watch-maker in one of those videos spending the time polishing and making chamfered edges on little parts of a watch that nobody would see. Or even if the parts were for a skeletonized movement, why it was necessary to do it since you couldn’t see the details with the naked eye. Little did I know that one of the pleasures of peering through a display back, was to see the intricacies of a movement. When the interior of a watch is polished to perfection and spotlessly clean, the pleasure is increased because your mind does not need to perceive imperfections, and can fully pay attention to the wonder of the movement.