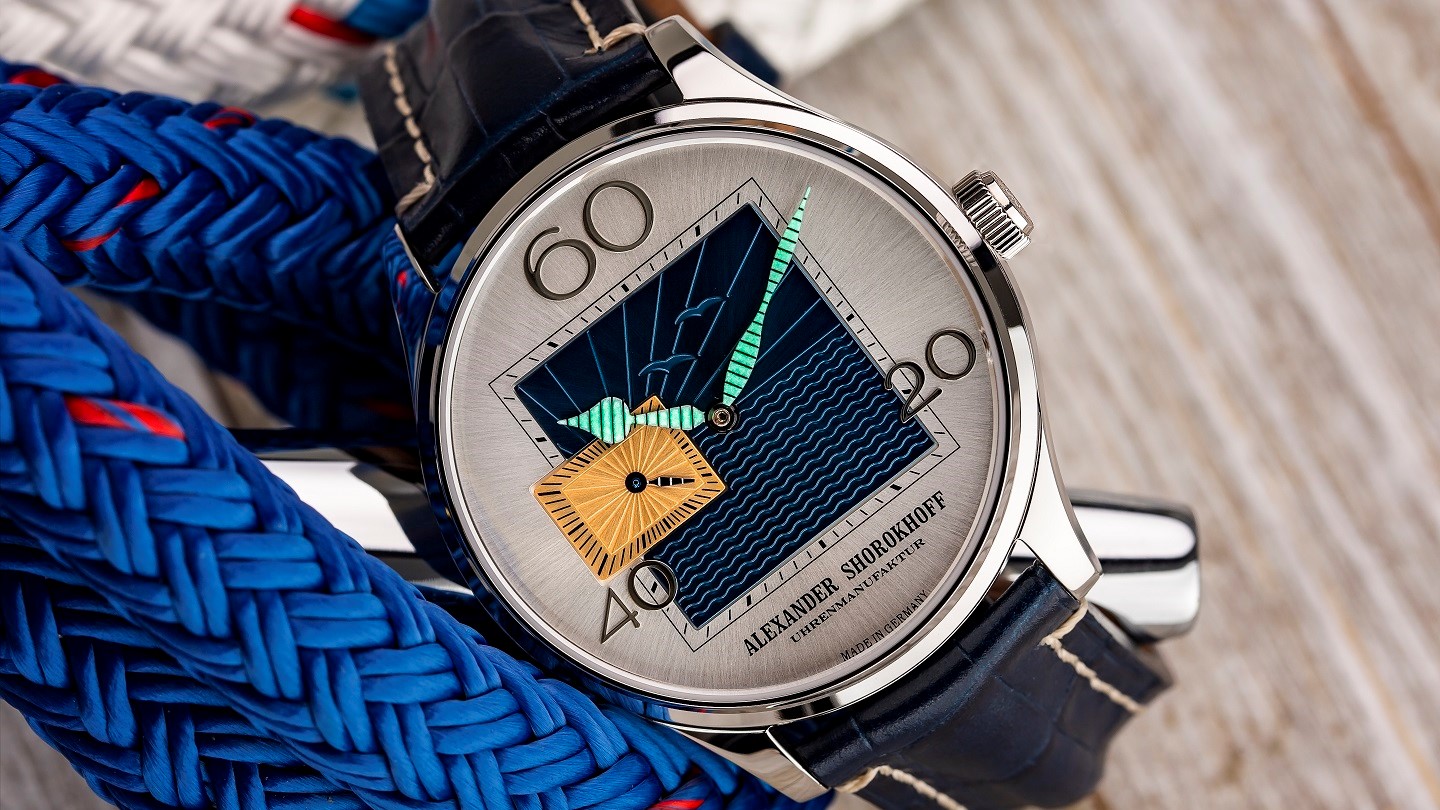 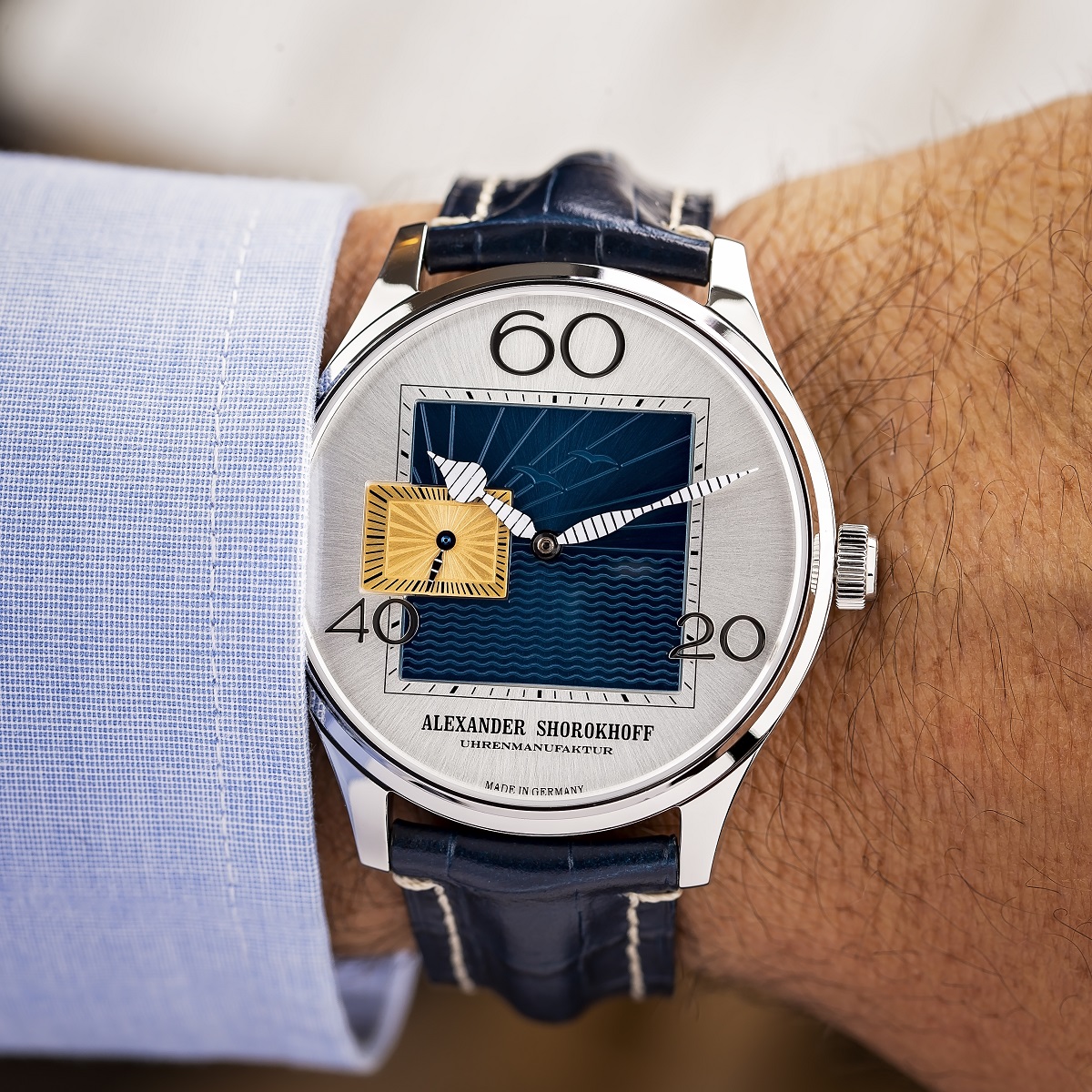 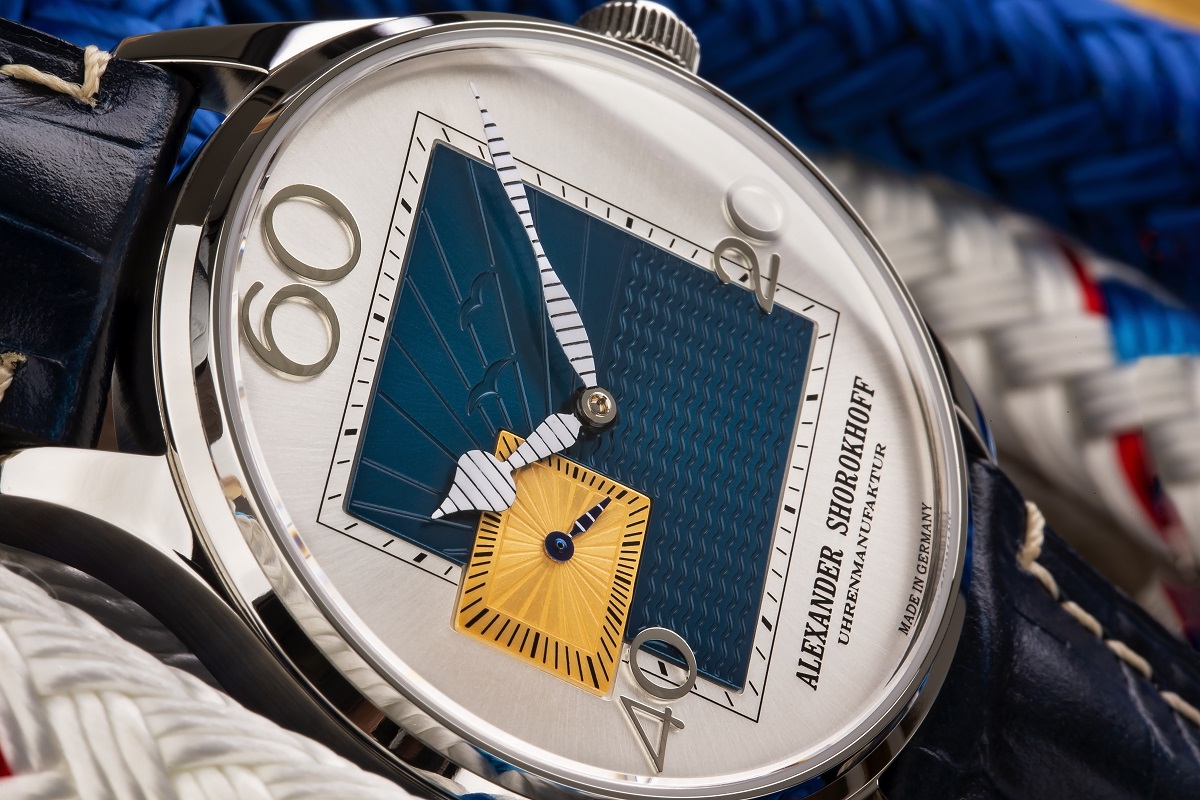 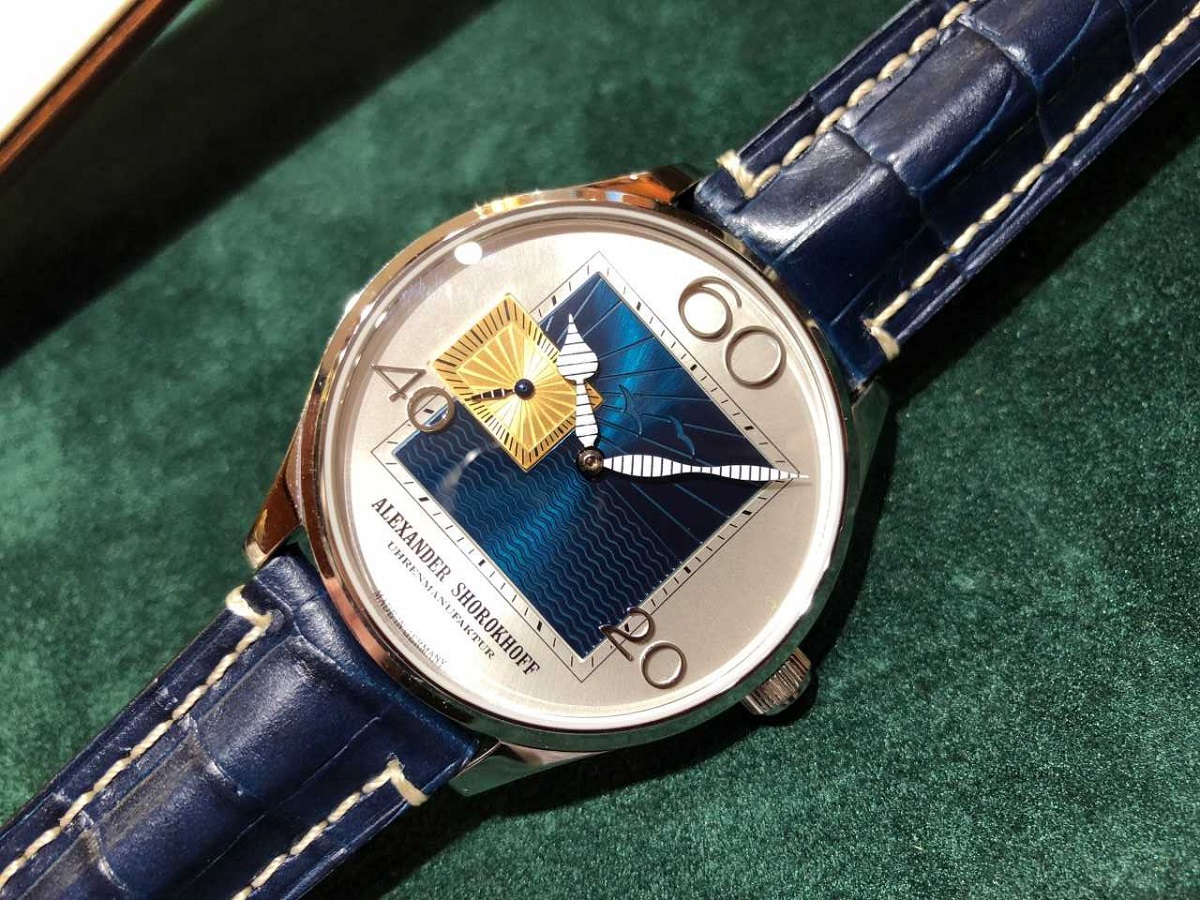 Unlike previous editions that had large “Newport RI” text right at 12 o’clock on the dial, the Alexander Shorokhoff Newport is more ambiguous in how the watchmaker has chosen to express his tribute. In a traditional steel case with a round dial is a metallic blue square at the center depicting ocean waves and a horizon with sun rays and seagulls – as you can see for yourself. The rays are emanating from the gold-plated rectangular seconds sub-dial positioned at 9 o’clock, seeming to represent the sun. The quite prominent 20, 40, and 60 are the only numerals on the dial, with the 60 at 12 o’clock even larger. This numeral motif is a characteristic design for Alexander Shorokhoff and can be found on many of his watches – such as the Avantgarde Lefthanders’ Automatic Chronograph reviewed here. 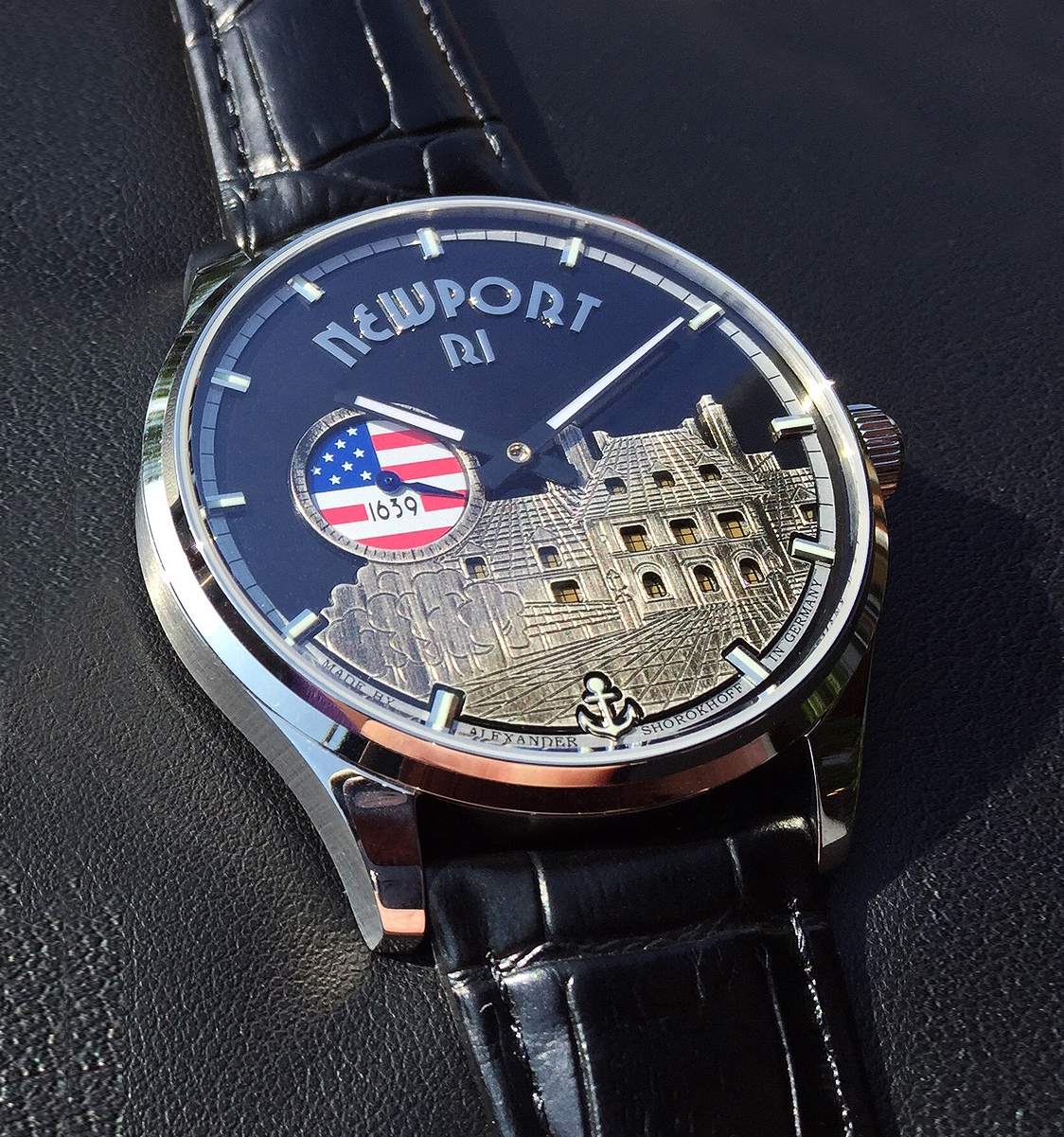 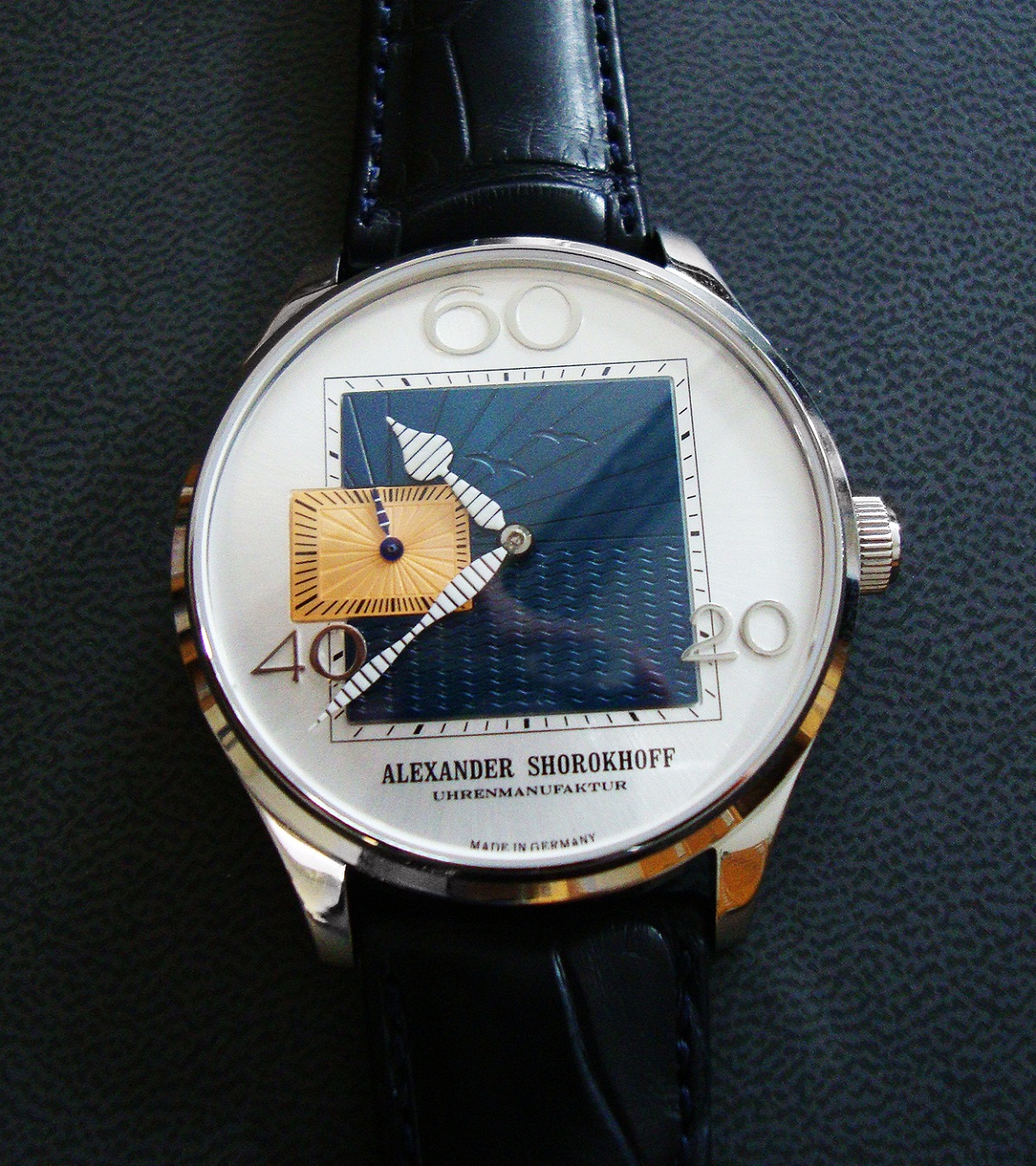 Like other Alexander Shorokhoff watches, the Alexander Shorokhoff Newport has an artistic aesthetic with a dense concentration of shapes and patterns that at first may appear chaotic. I believe the idea is that there is a harmony to be found when taken together and as a whole. There is also a clear Art Deco influence to many elements of the design. I have always found Alexander Shorokhoff’s 20-40-60 motif to be eccentric for my personal tastes, but I find the striped hands (with lume) used here to be even more so. At least they should be sufficiently legible. Who knows, elements such as these striped hands might even have some special significance that I don’t recognize, having never been to Newport myself. Each component, however, appears to be individually crafted and applied for a good sense of dial depth and complexity. 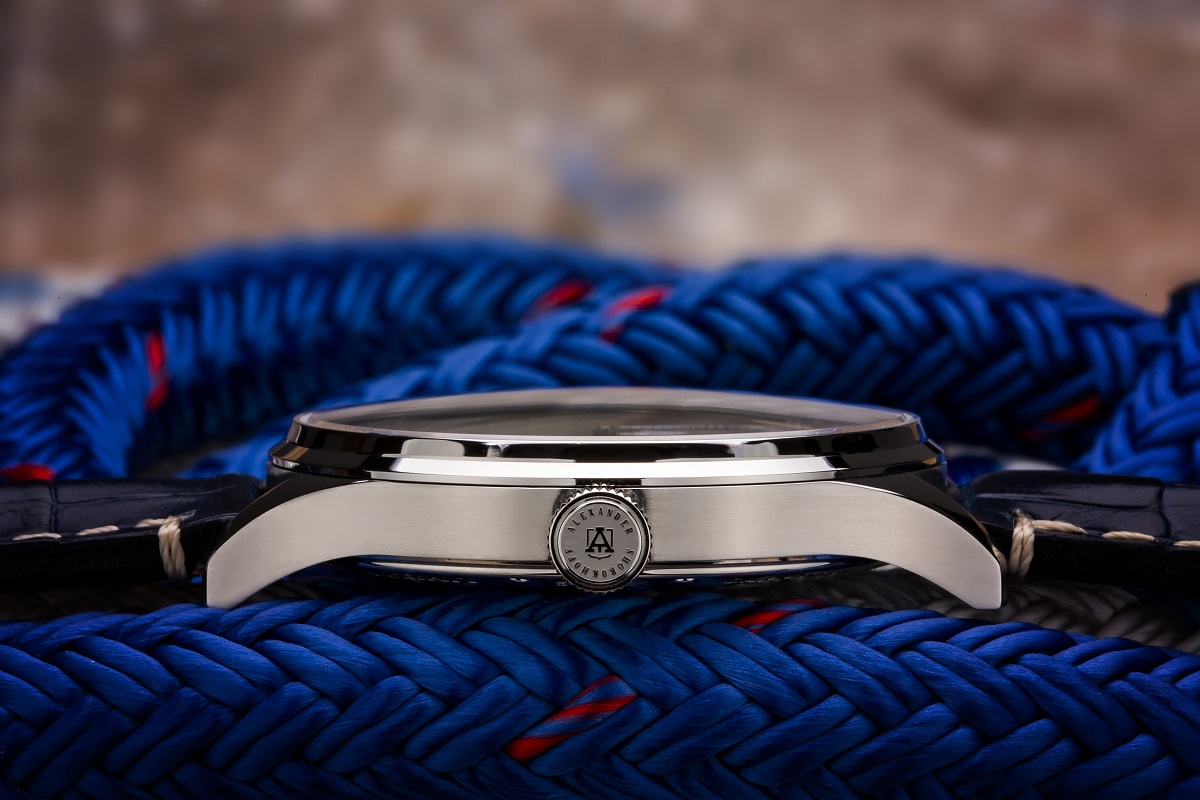 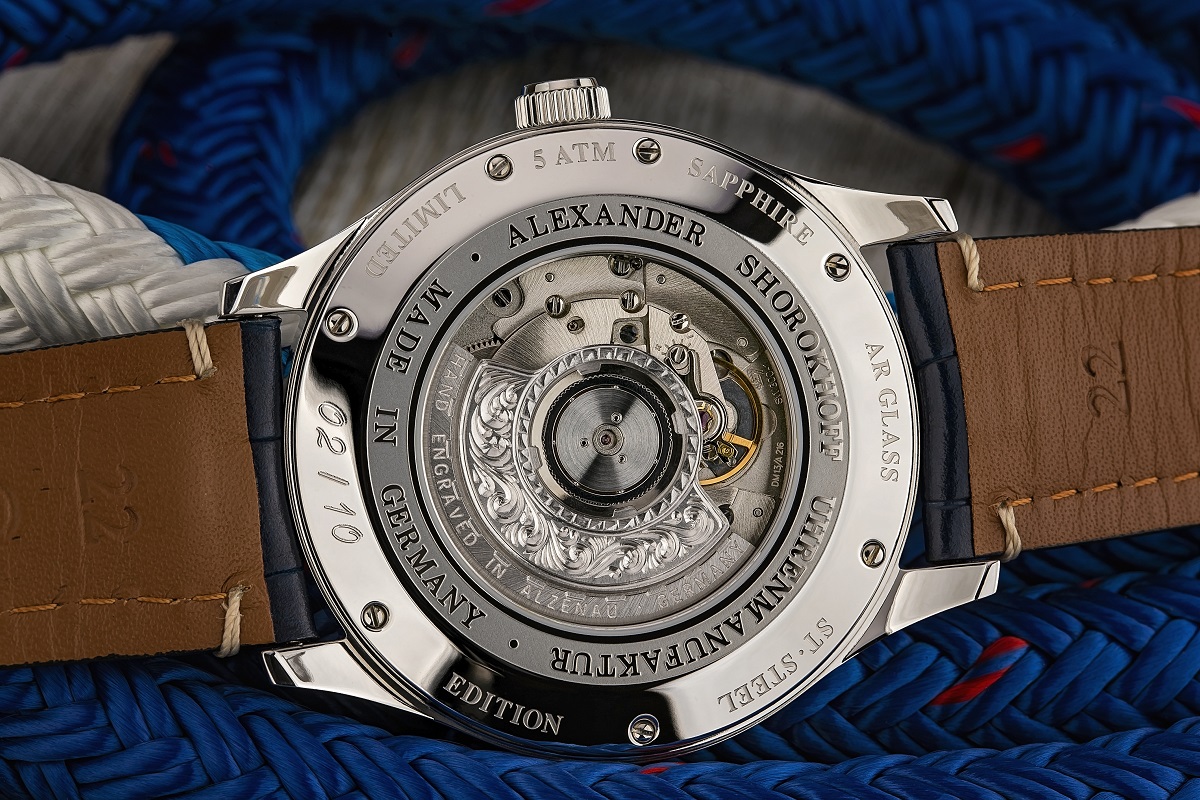 An exhibition caseback shows the Sellita SW300 automatic movement with a nicely hand-engraved rotor. The Sellita SW300, equivalent to the ETA 2892, is broadly considered a bit more premium than the SW200 or its ETA 2824 equivalent. It gets a power reserve of 42 hours, operating at 4Hz. The caseback indicates some relevant specs for the watch such as 50m of water resistance, limited edition number, and use of antireflective-coated sapphire crystal, as is common – but again, no explicit mention of Newport. If the dial design were not noticeable enough already, the Alexander Shorokhoff Newport watch case is a sizable 43mm wide. 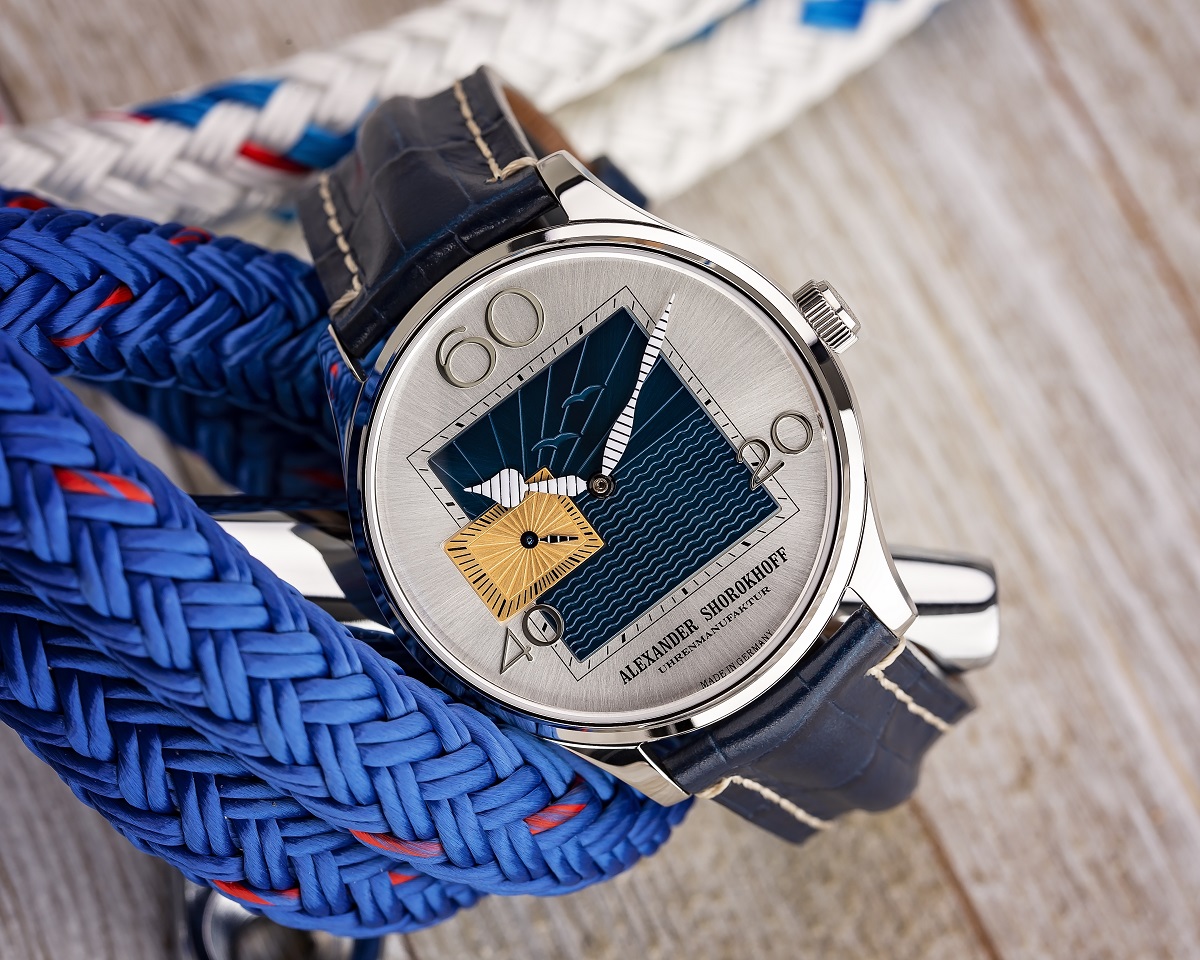 It’s always nice to see themed limited-edition watches made in a more ambiguous way and not covering them in explicit text, just as Alexander Shorokhoff has done. Doing so leaves them open to people who might be attracted to the theme or design but don’t have a specific personal connection to it. That’s happened to me a number of times. So, besides proud Newportopian(?) Rhode Islanders or souvenir-seeking tourists, anyone could potentially find this whimsical design to be compelling. The Alexander Shorokhoff Newport is limited to just 10 pieces, available only from Grenon’s of Newport (who we interviewed here), and will have a price of $3,800. alexander-shorokhoff.de