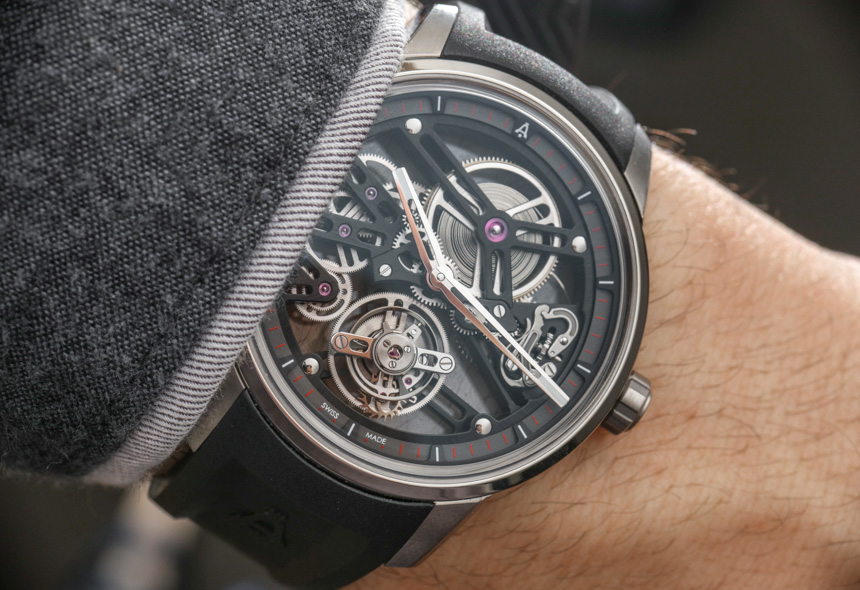 For 2016, Angelus released a few more new tourbillon watches. Thus far, all four watches from the Angelus brand, which is a sister company of Arnold & Son, have a tourbillon-style regulation system in the movement. That includes the Angelus U10, U20, U30, and U40 models. Interestingly enough, the tourbillons aren’t engineered the same, so there is some variety even at the still young (actually newly revived) brand. The Angelus U40 Racing Tourbillon Skeleton watch is currently the brand’s most accessibly-priced model, and a good way of looking at it is as a smaller sibling to the more expensive Angelus U20 Ultra-Skeleton Tourbillon watch. 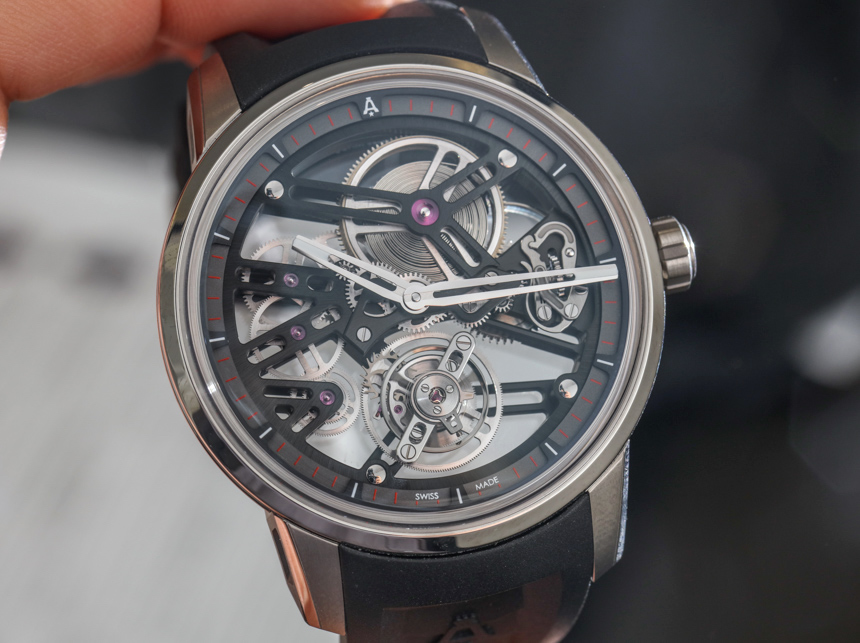 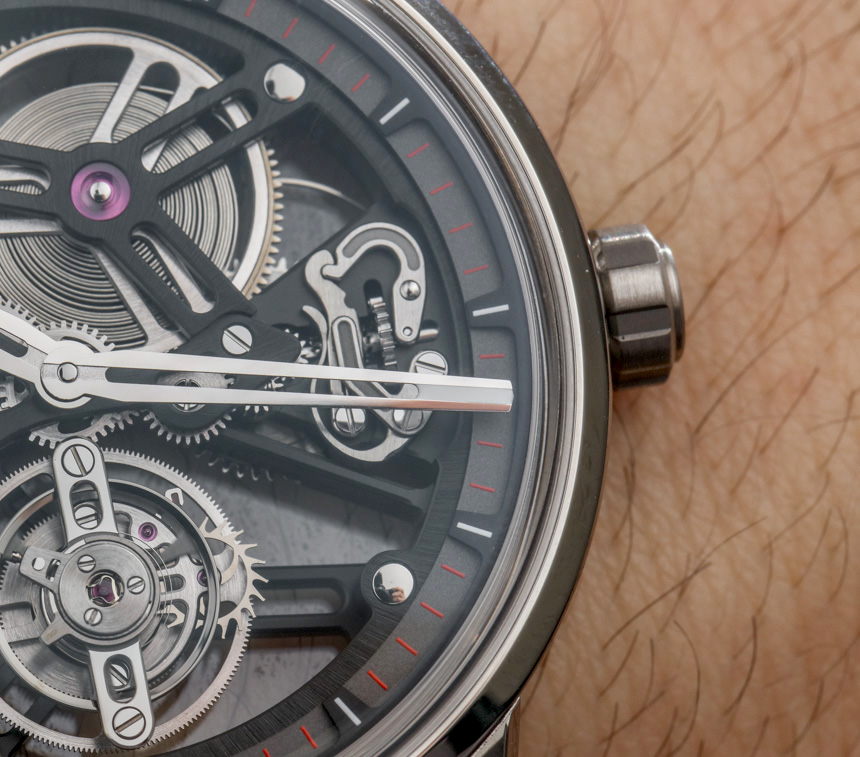 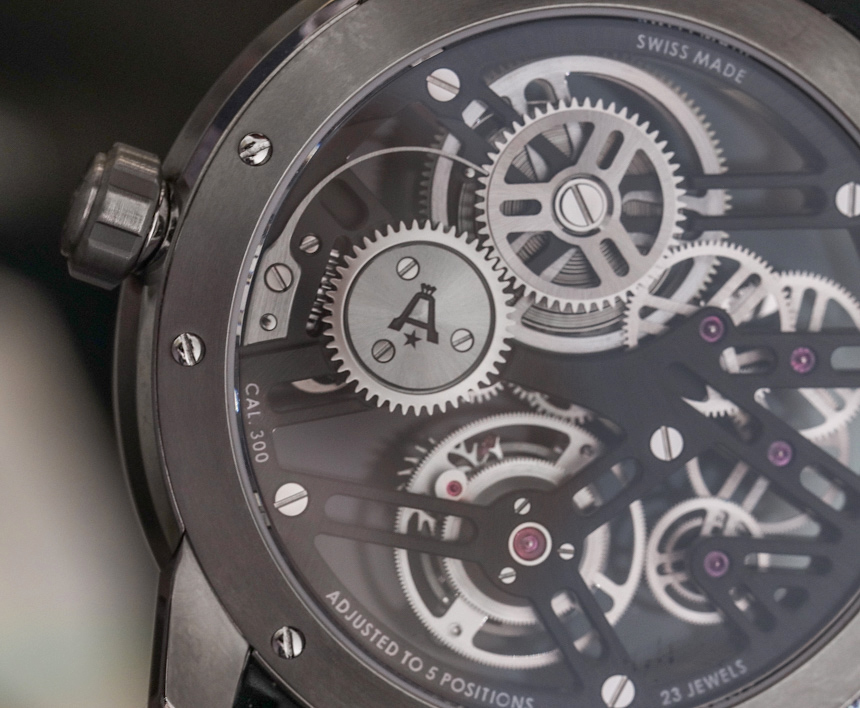 The Angelus U20 and U40 watches are both 42mm wide, lightweight, and feature similar movements with some shared parts. The U20 is more expensive given the design of the case as well as the movement, which relies heavily on sapphire crystal plates to keep it all together. The Angelus U40’s caliber A-300 manually wound movement relies instead on a more traditional mechanical movement architecture which used black-colored titanium bridges, which have been designed from the ground up to offer that cool skeletonized look that remains so popular. 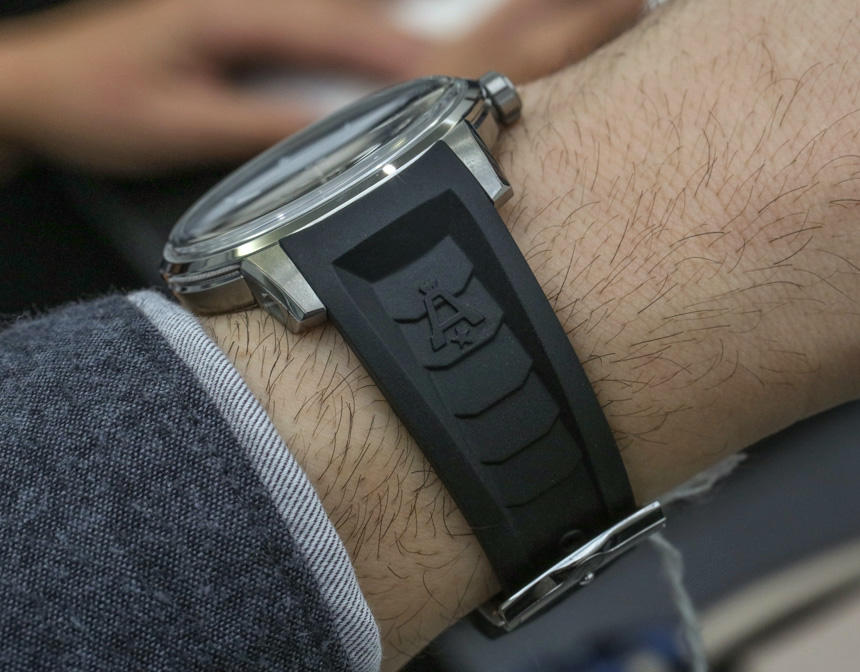 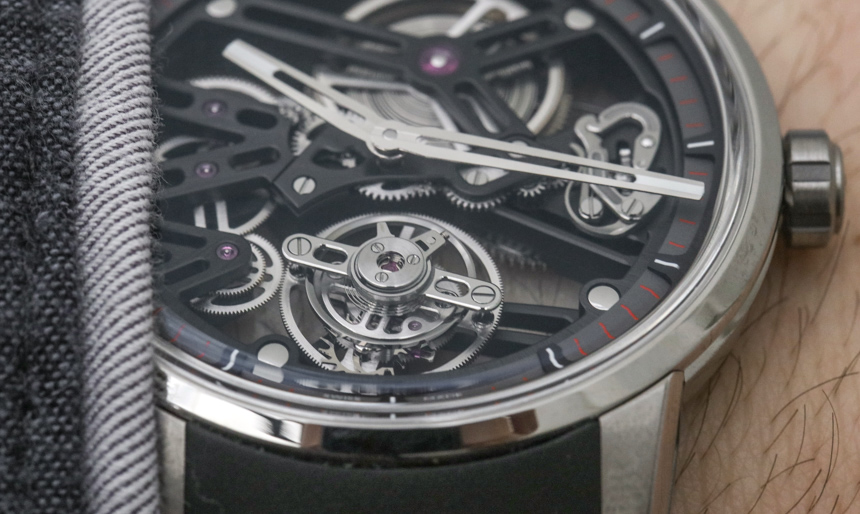 Angelus’ Sebastien Chaulmontet says that the Angelus U40 Racing Tourbillon Skeleton is inspired by supercars, hence the “Racing” part of the name. I wouldn’t per se include this watch in the universe of automotive-inspired or related timepieces, but it does have a distinctly sporty look to it. It also happens to be one of the most comfortable modern tourbillon watches I’ve worn thanks to the nicely designed 42mm-wide (10mm-thick) titanium case and neatly-fitted rubber strap. While the case is slightly different from the U20, both the Angelus U20 and U40 watches have almost identical proportions and will fit very similarly. 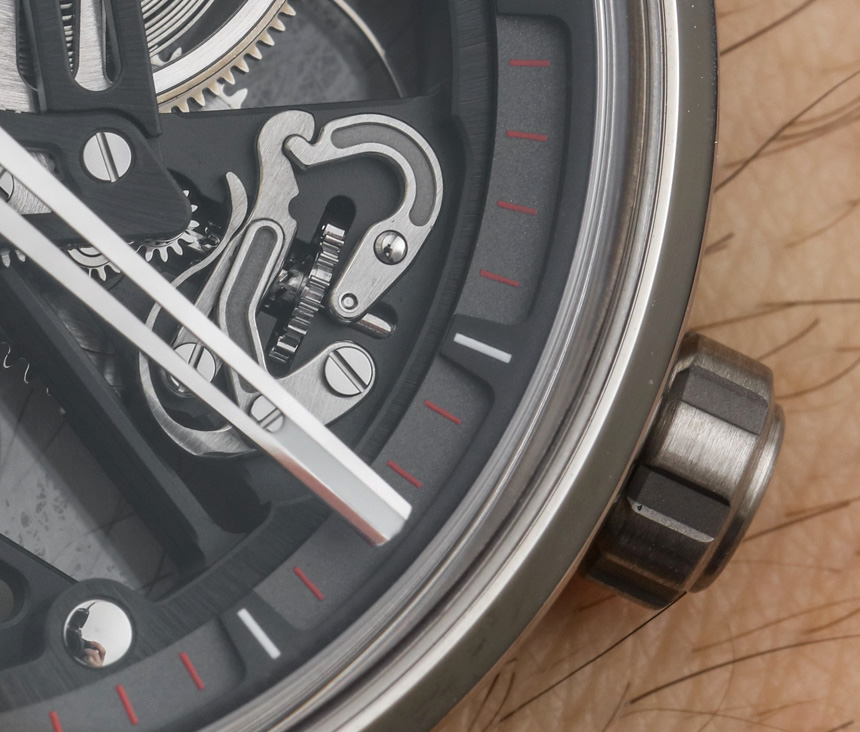 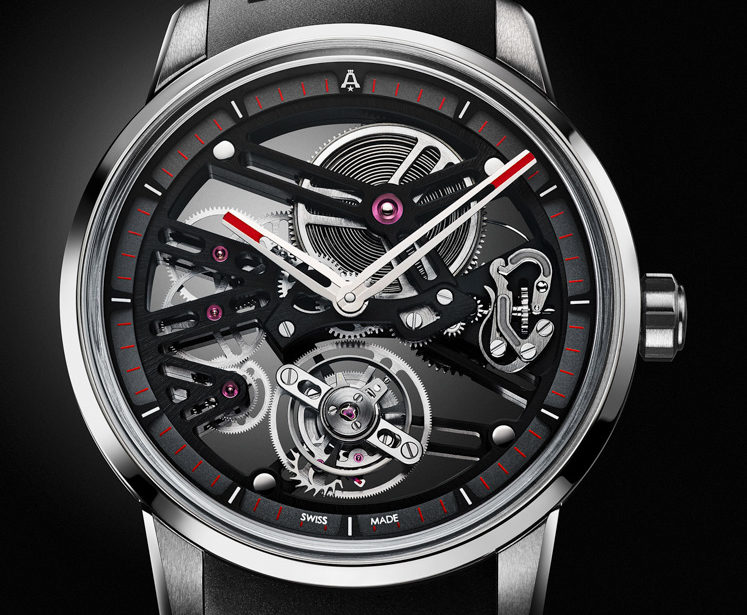 Another amusing similarity between the U20 and the Angelus U40 is that each have two models that are extremely similar in design. One version of the Angelus U40 Racing Tourbillon Skeleton has red-tipped hands and the other has white-tipped hands. To be honest, I’m not sure why there are two versions of this (meaning why they couldn’t just choose one) but it does add a fun flavor to the model and some added collectibility. Oh, and unlike the Angelus U20 Ultra-Skeleton Tourbillon, the U40 is not part of a limited edition. That also makes it the first non-limited edition Angelus model thus far (the U10, U20, and U30 are all extremely limited in numbers, with just 10 to 25 pieces each). 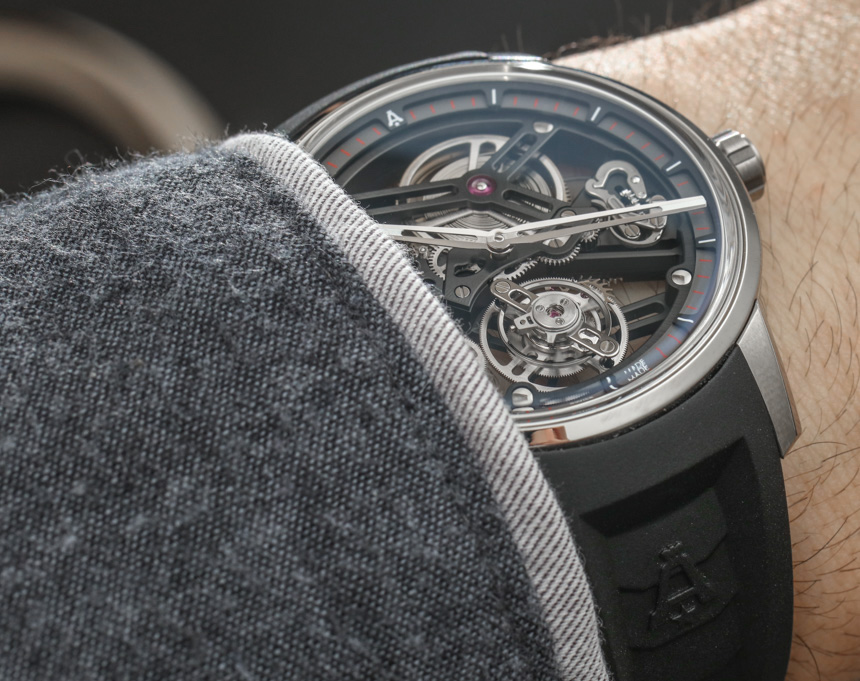 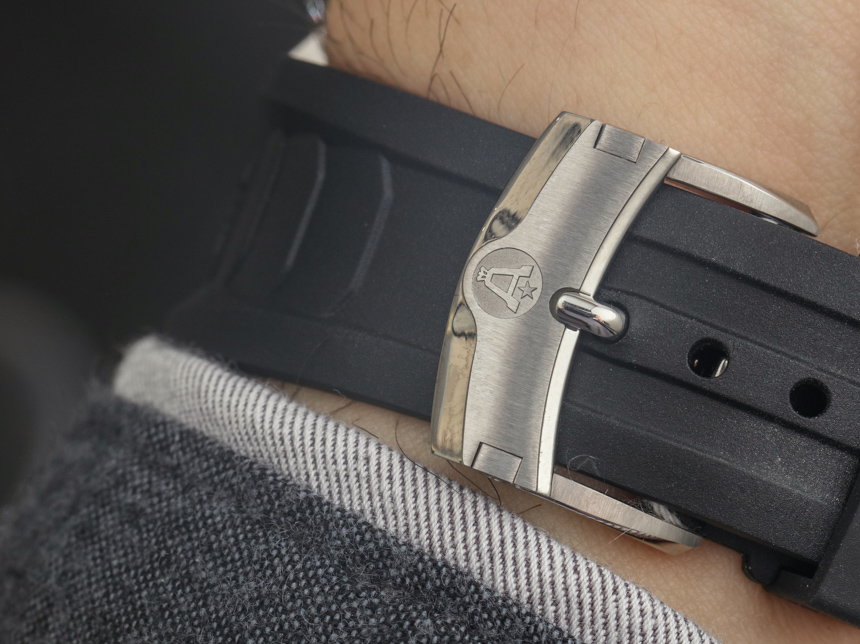 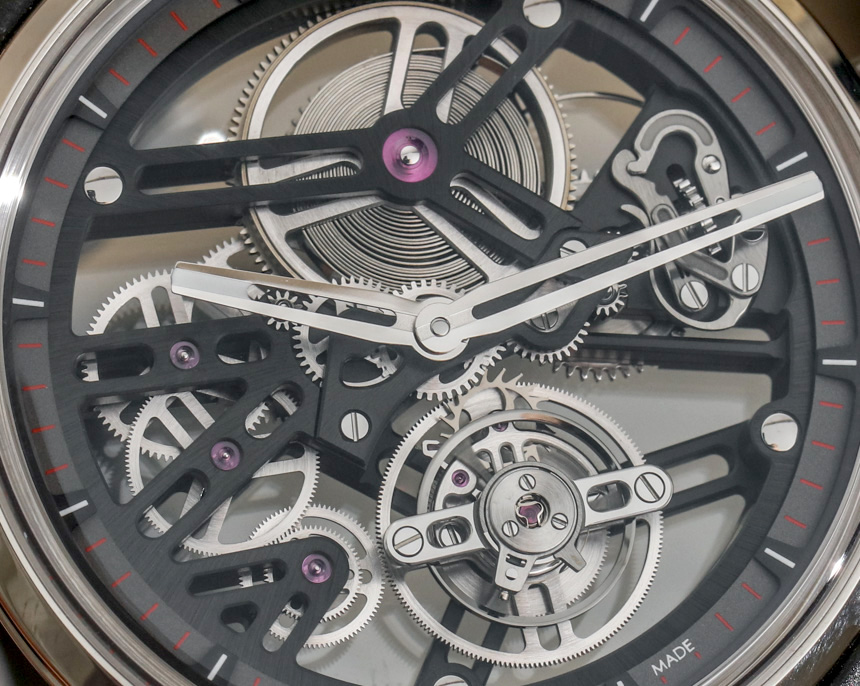 In my opinion, the standout feature of the Angelus U40 Racing Skeleton Tourbillon is its wearability and versatility. Angelus seemingly wanted to make a very contemporary daily-wear tourbillon. It combines elements of luxury (obviously), engineering appeal, active lifestyle, and exclusivity. There is a growing market for that, especially from people who are getting bored of much of the same from many of the traditional luxury watch makers.

Dial legibility is pretty good given that this is a skeletonized face. The hands are well-sized and the white or red-colored tips help in conjunction with the hour and minute scale on the chapter ring. 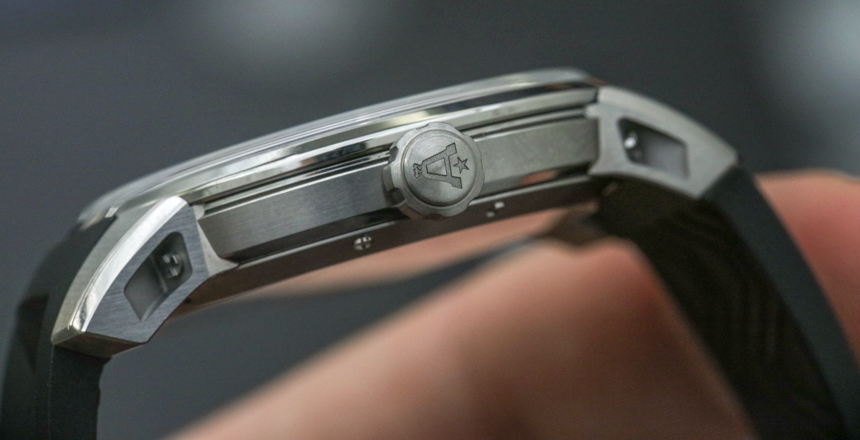 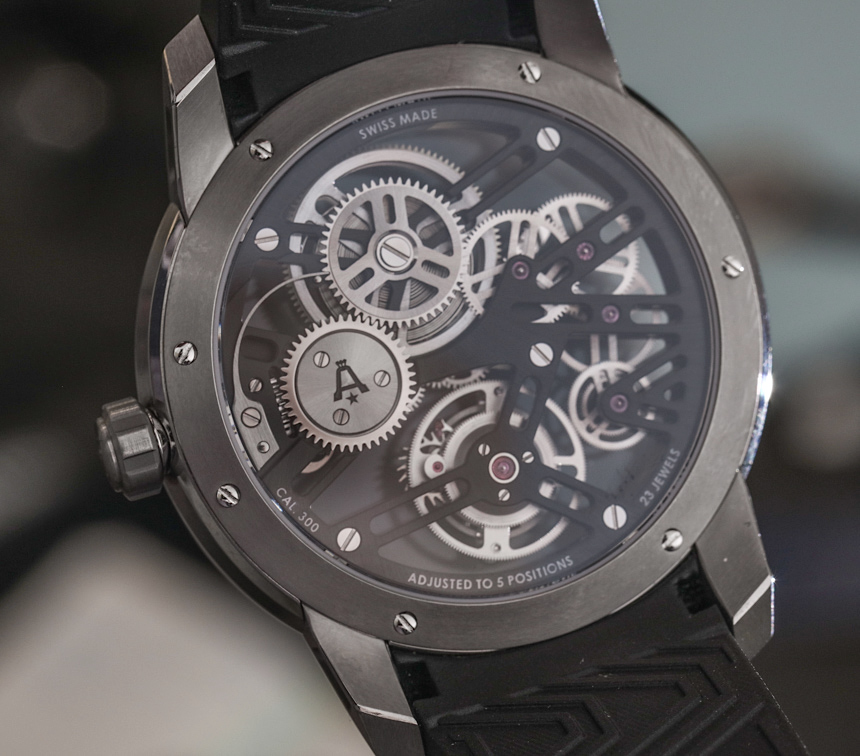 Inside the Angelus U40 Racing Tourbillon Skeleton’s titanium case is the in-house made caliber A-300 movement, which operates at 4Hz (28,800bph). This is opposed to the slower 3Hz operational speed of the caliber A-250 movement inside of the U20 watch. Power reserve for the A-300 is 60 hours. The movement bridges are ADLC-coated black and, again, the watch displays just the time with hour and minutes via the hands and seconds via the tourbillon, which is located above 6 o’clock. While there is no dedicated power reserve indication complication, you can more or less estimate the need to wind the movement by viewing the dial. This is accomplished when looking at how tightly wound the mainspring is, which is visible through the skeletonized mainspring barrel. 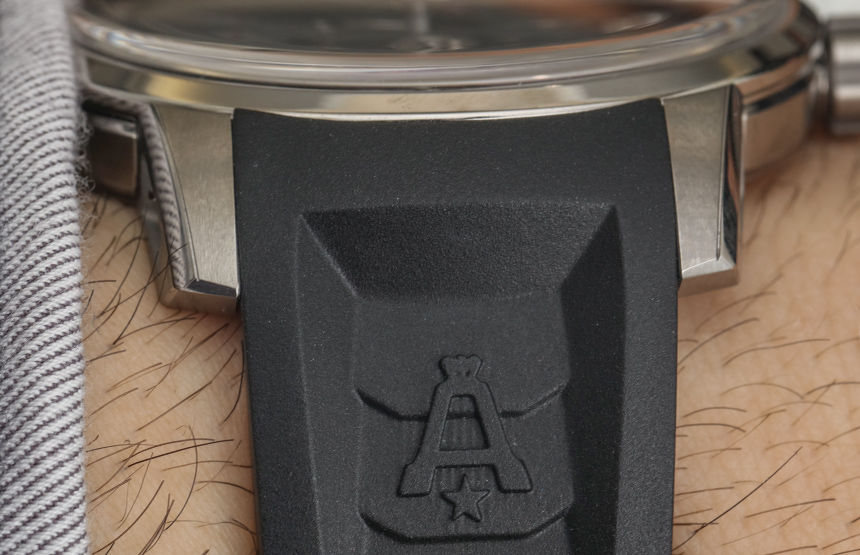 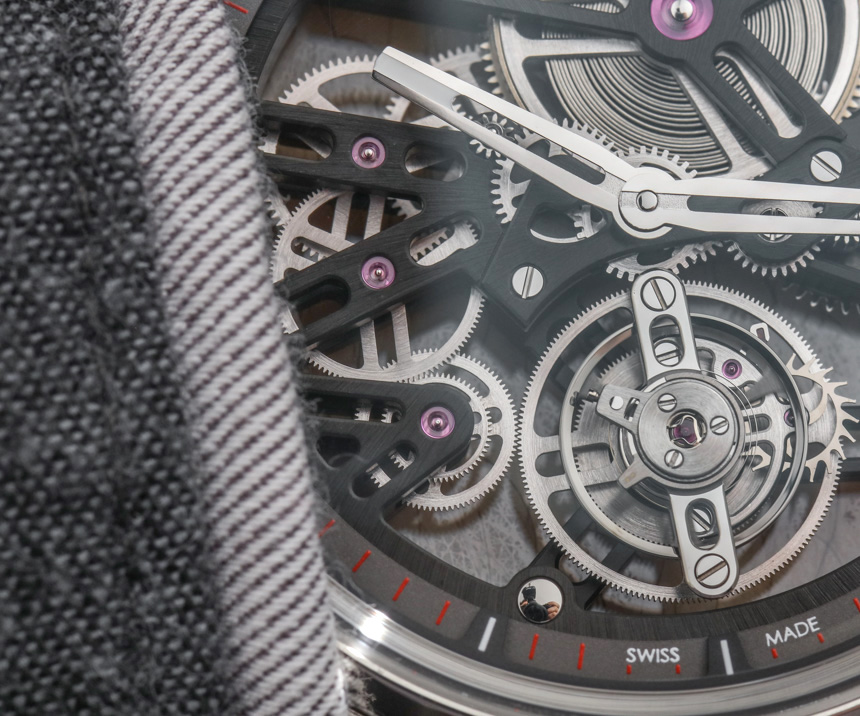 The market for watches like the Angelus U40 Racing Tourbillon Skeleton is surprisingly crowded right now, even though the brands that offer watches like this all have a high-level of technical competence. Angelus’ main distinction factors are in design, comfort, novelty, and exclusivity of the brand, as well as in price. Assuming you can find one of these watches (the brand only makes a handful of watches each year at this point), there is a lot of value to be had. The Angelus U40 Racing Tourbillon Skeleton comes as the reference 0TSAT.B01A.K007T (red-tipped hands), and the reference 0TSAT.B01B.K007T (white-tipped hands), with a price of $28,750 USD. angelus-watches.com