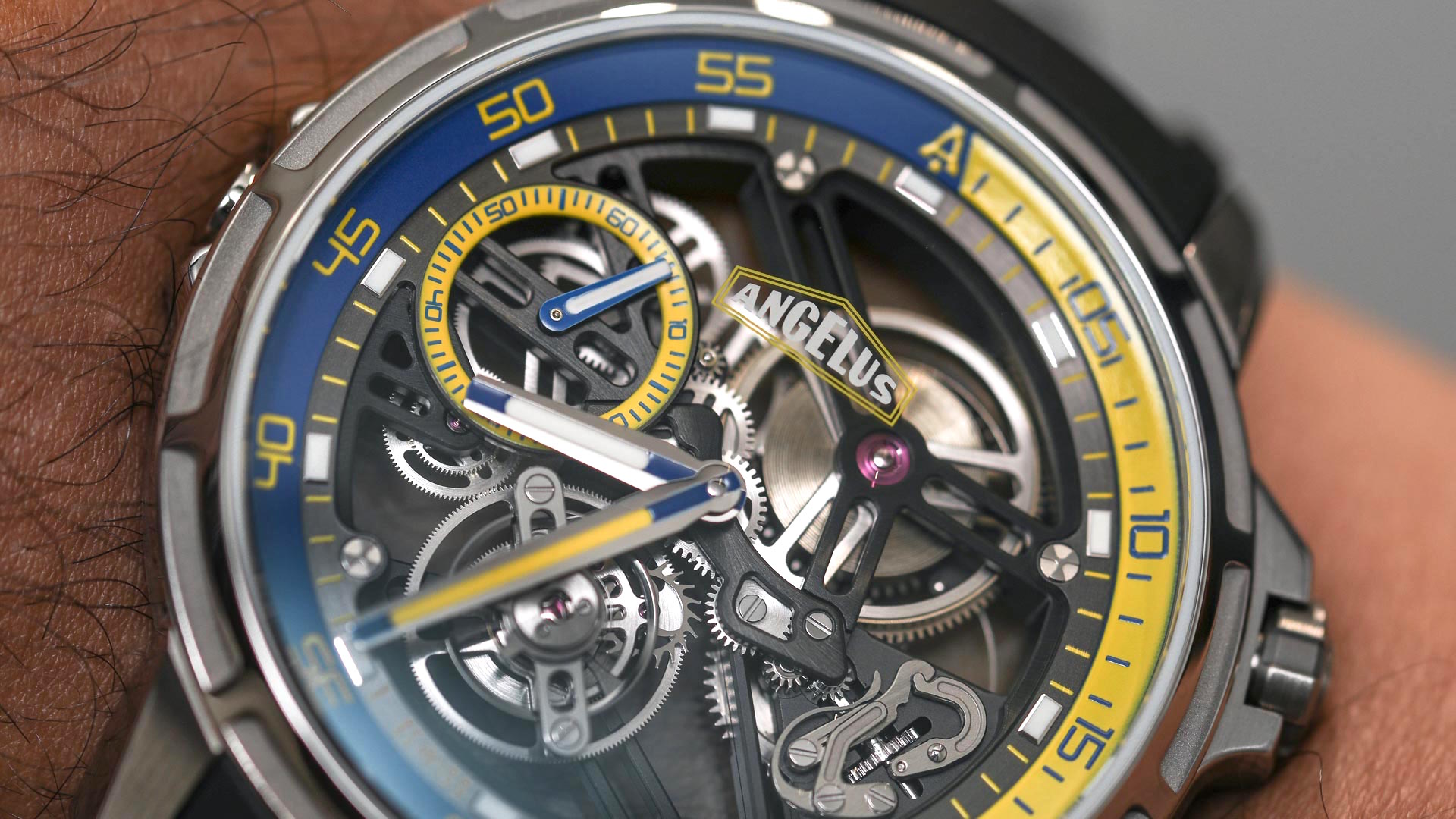 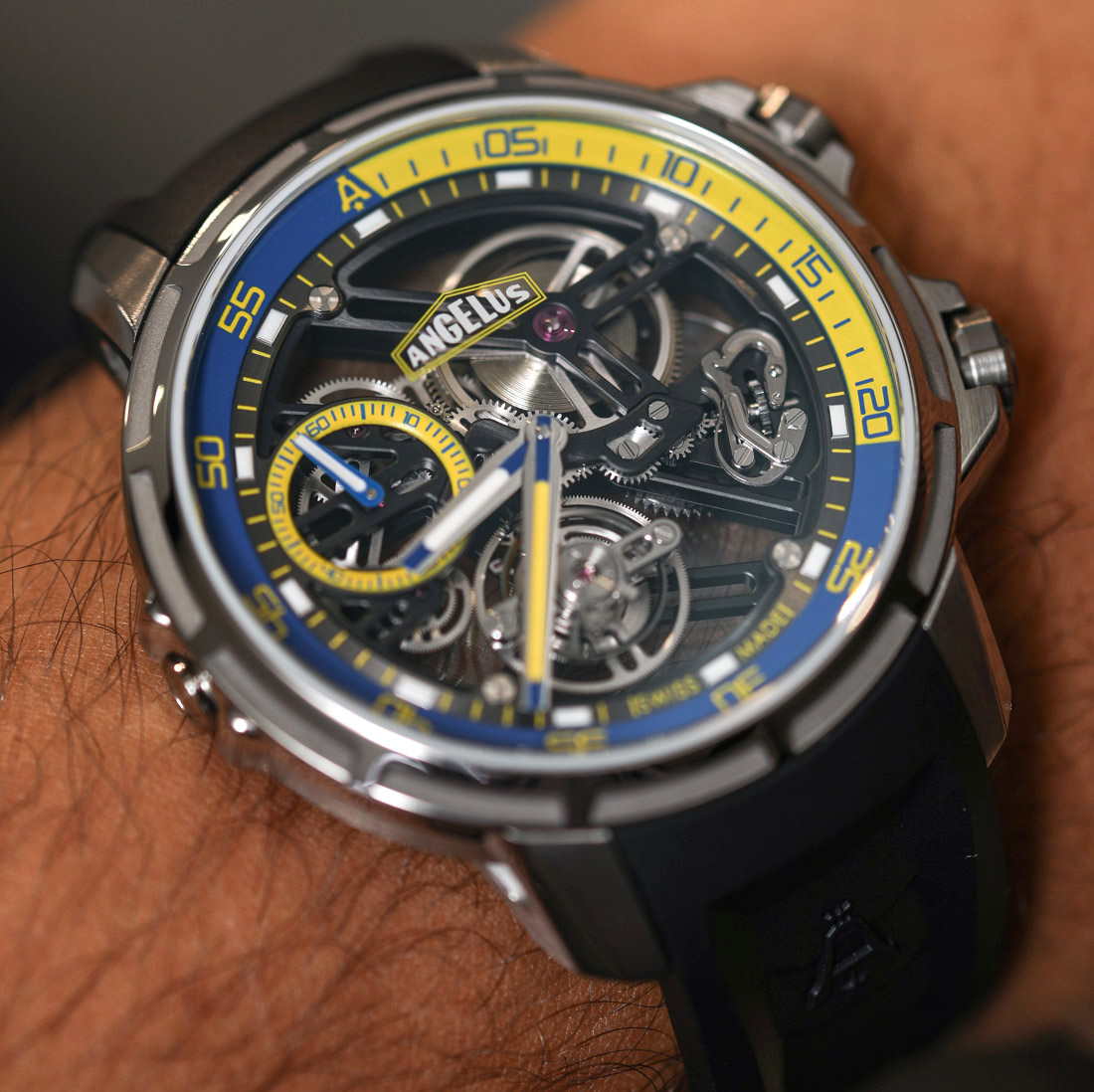 In keeping with their tradition of utilizing technologically forward materials to produce visually interesting, densely over-complicated watches, Angelus released their first ever diver’s watch, the U50 Diver Tourbillon, during the lead-up to Baselworld. The U50 is a 300 meters water resistant, 45mm wide, titanium cased, totally in-house sport watch with a flying one minute tourbillon. At Baselworld, your pals at aBlogtoWatch were able to get their hands on Angelus’ new ocean-faring creation to get a closer look at the U50’s impressive list of features. 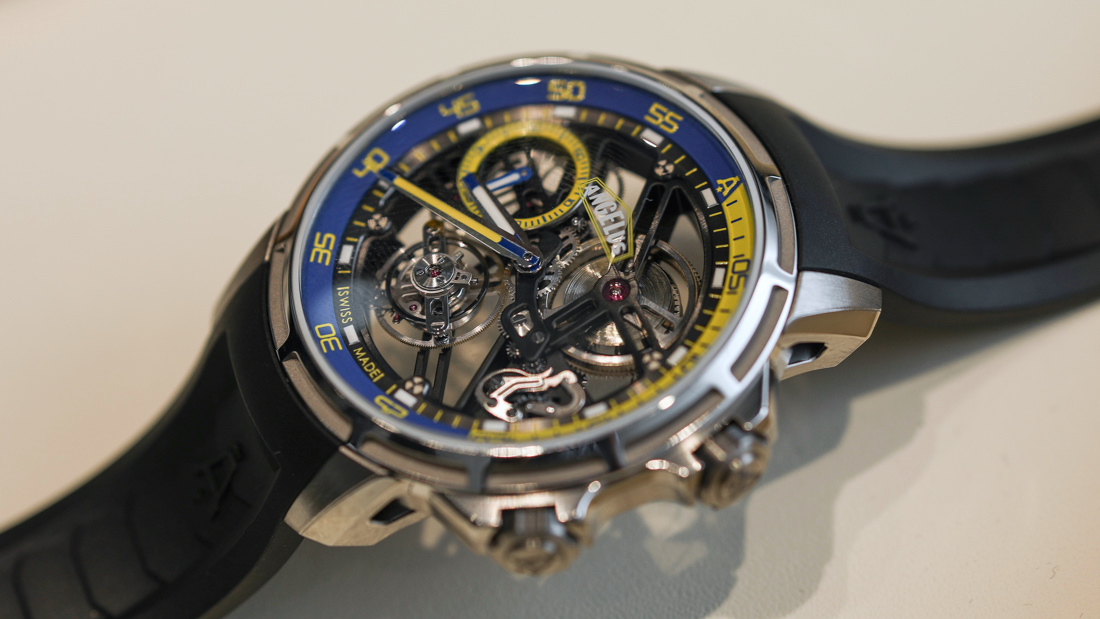 As they did with the design of their U21 and U22 models, Angelus have again built a watch that doesn’t believe in the typical front facing dial with a movement anonymously lurking behind. Rather, the dial and movement coexist in an elegantly constructed display of watch design. With the U50, Angelus took the idea a step further. Whereas the U21 and 22 have a sort of “back” built behind the mechanism (in carbon fiber, which was cool), the U50 is fully skeletonized in a manner similar to the brand’s U20 Ultra Skeleton, which debuted in 2016. That the wearer’s wrist is visible underneath the the A-300 Caliber gives the watch a great deal of visual depth and complexity. 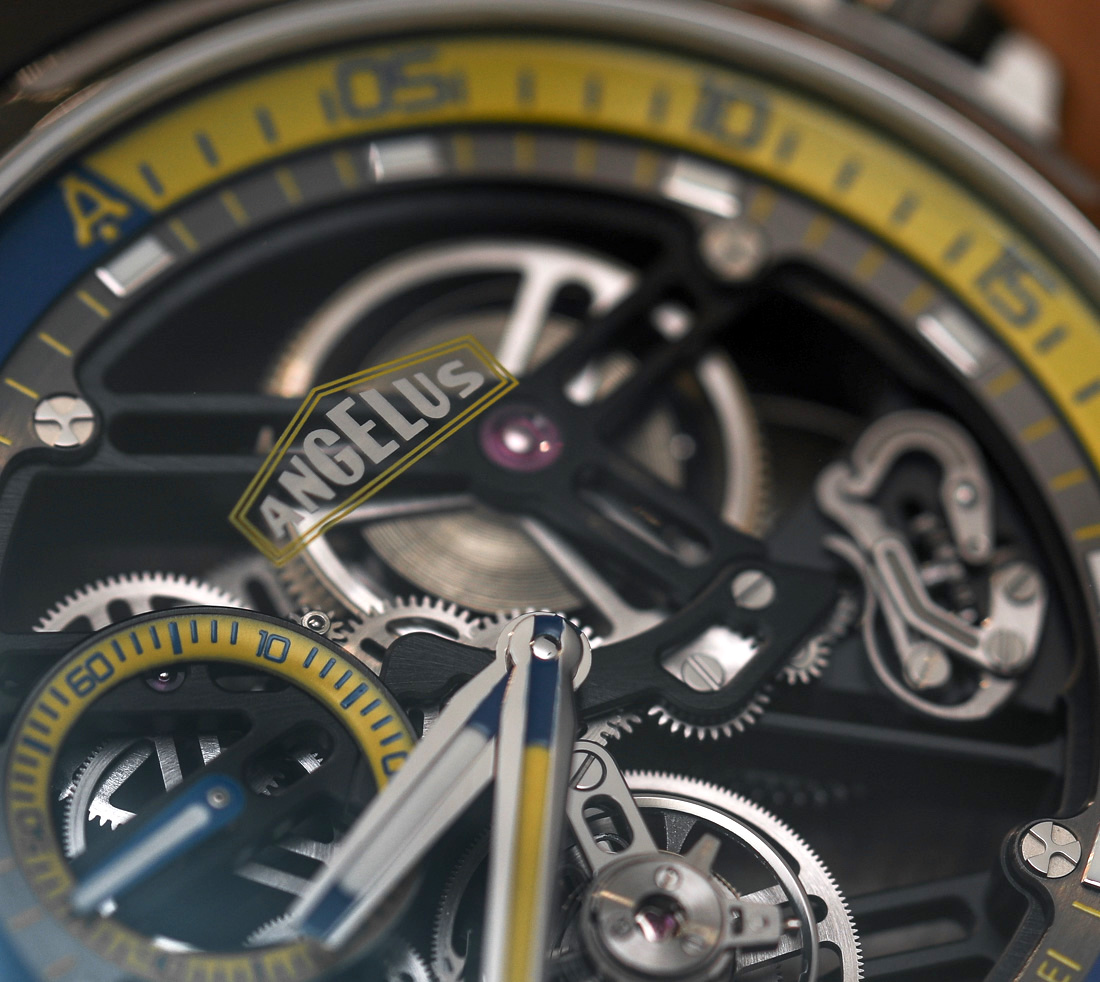 The only traditional dial elements to be found are the Angelus signature at twelve o’clock, which actually lives on the underside of the anti-reflective sapphire crystal, a chapter ring with yellow minute graduations, and applied rectangular lume blocks for hour markers. The hands are blue and yellow, filled with a reasonably sized helping of white SuperLuminova to keep the sporty theme alive. In addition, a small seconds sub-dial, also executed in blue and yellow, is tucked neatly between nine and ten o’clock and has its own tiny lumed blue hand. The internal diver’s bezel, an essential element for a diver’s watch, is also blue and yellow, with an Angelus-styled “A” for a zero/sixty minute marker. 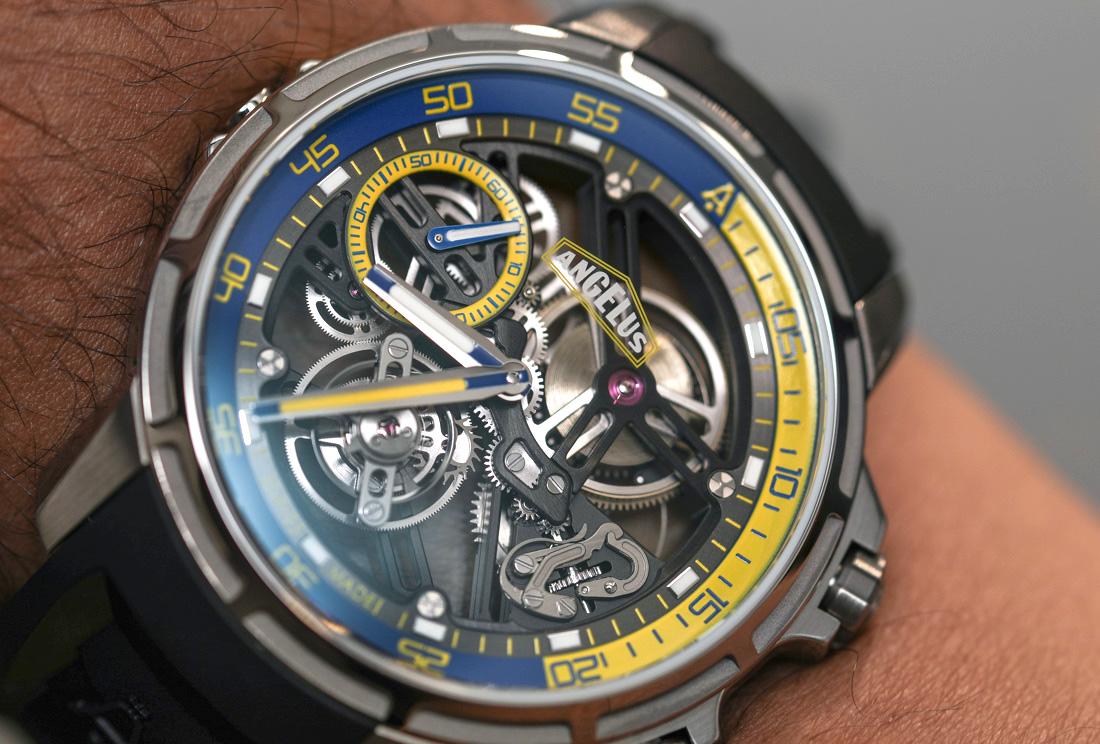 It’s worth noting that the legibility of the Angelus U50 Diver Tourbillon is better than expected for a skeletonized watch, but it’s still pretty rough compared to a watch that’s actually intended for diving rather than for showcasing technological prowess, as is the case with the U50. While we didn’t have the opportunity to photograph the watch in the dark, I would imagine that a lume shot might actually present a more legible picture, as the complicated mashup of the dial and movement would be less distracting than it is during the light of day. 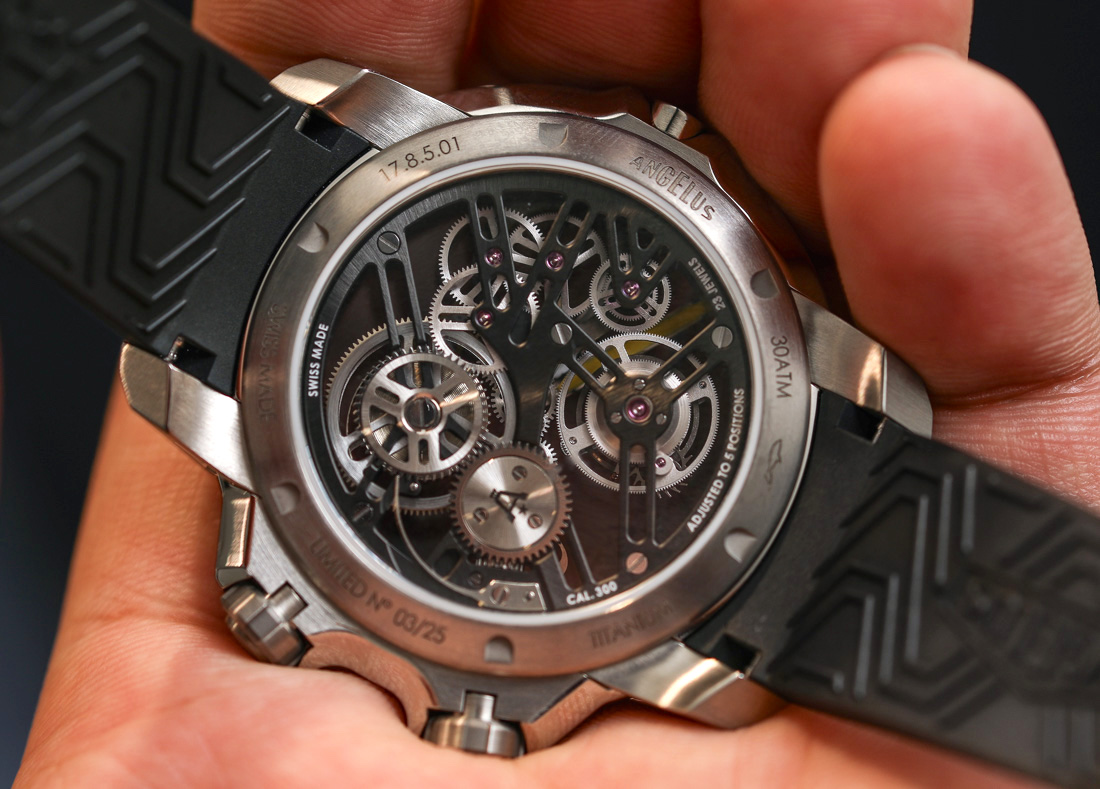 The real star of the show, and what accounts for much of the cost, is the Angelus A-300 caliber, built with a one minute flying tourbillon. With 23 jewels, a diameter of 32.8mm, and an impressively spindly 4.3mm thickness, the A-300 is haute horlogerie both because of its technologically advanced execution and its impressive level of decoration. Both the main plate and upper bridge of the A-300 caliber are etched with chamfered edges and coated with a black ADLC coating. The six-pointed design of the wheels in the gear train make them stiffer as well. Finally, the beautiful tourbillon cage is mirror polished with painstakingly chamfered and polished edges. This is a movement you can’t stop looking at, and it makes a lot of sense that Angelus left all of it out in plain sight. 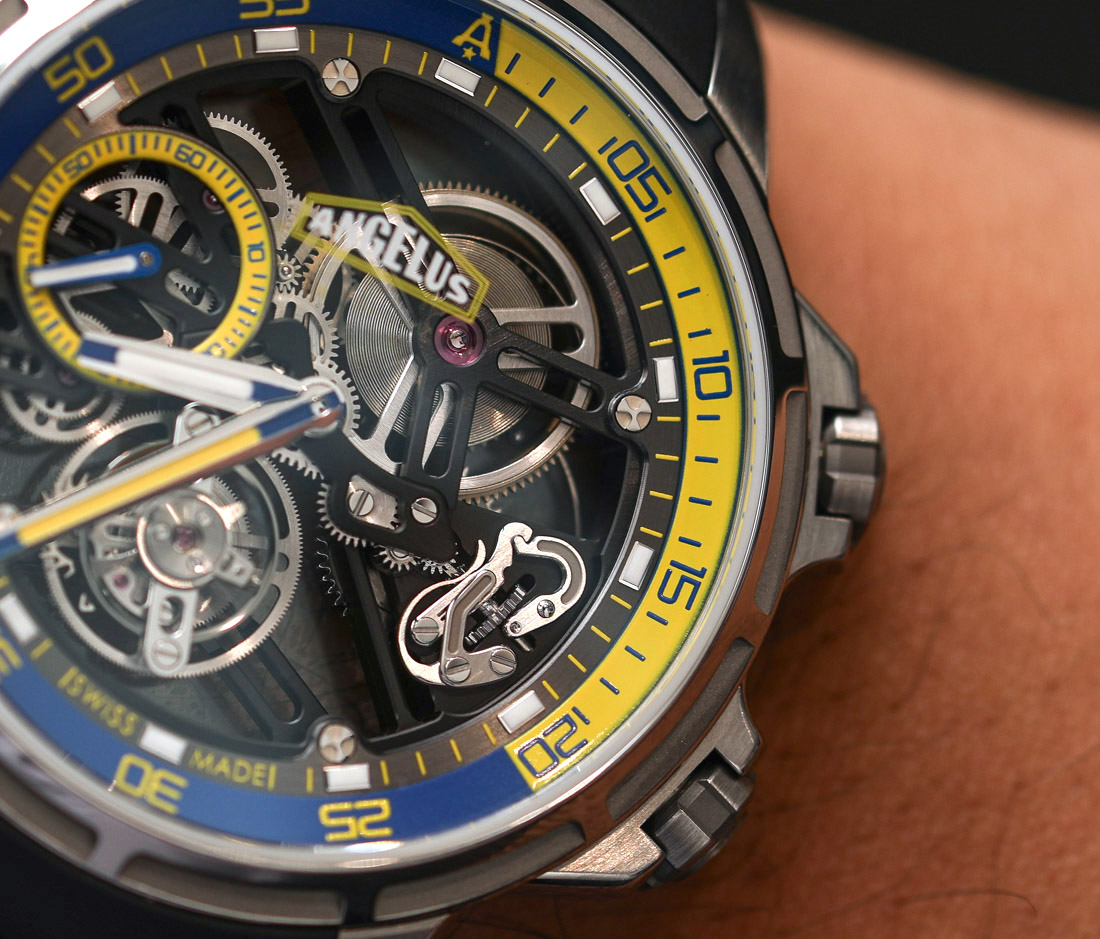 But at the end of the day, the U50 is a diver, so there is a matter of the 300m water resistance. Luckily, Angelus have also incorporated their tech savvy into the design of the dual crown case. Built in a 45mm wide titanium design, the U50 case is masterfully executed with a mostly brushed top and polished sides, which make full use of titanium’s unique darker-than-steel color. As with many other dual crown divers, twin, beveled titanium screw-down crowns with ample crown guards are in the two and four o’clock positions. Anti-reflective sapphire crystals are featured both in front and back, maintaining a high level of visibility of the U50’s inner workings. 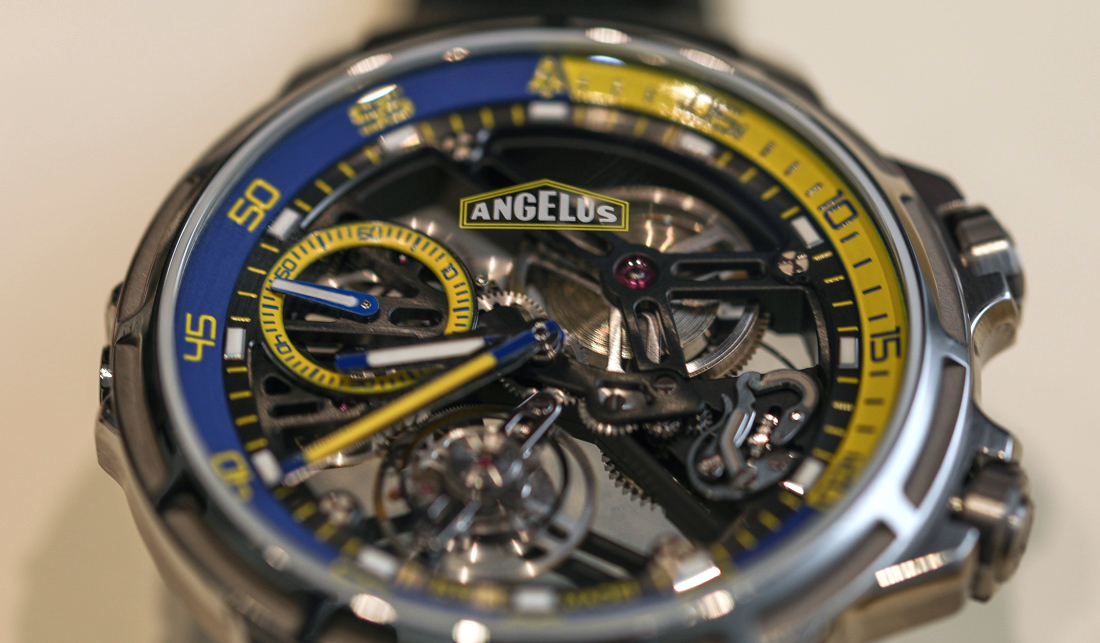 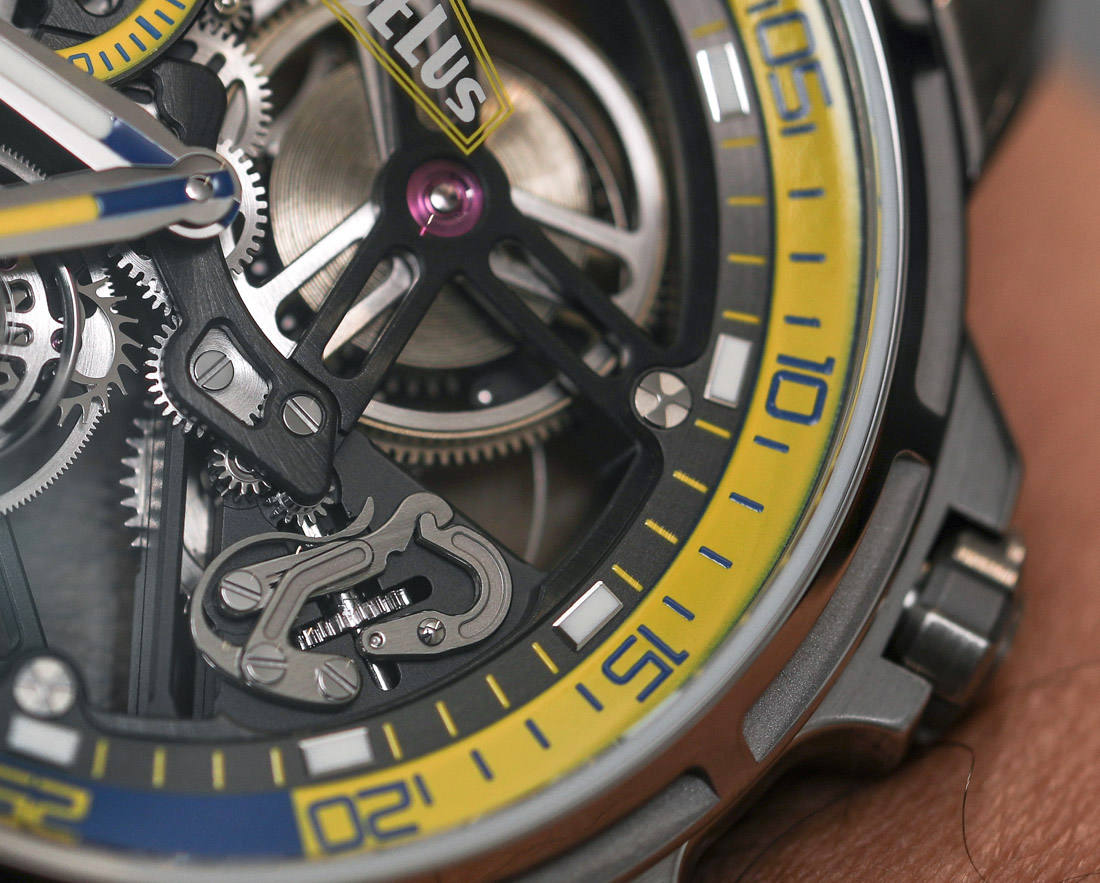 As a diver myself, it’s interesting to note Angelus elected for an internal bezel with the U50. Internal bezels, while cool, are something of a conundrum, as they are difficult to operate in the water and require unscrewing the crown, not something you normally want to do in the water. Normally, a diver sets the watch’s bezel just before leaving the surface, but with an internal bezel, that process is a bit more complicated. Given the significant cost of the Angelus U50, it’s hard to imagine anyone unscrewing it anywhere near water, since there’s a risk it might flood the exquisite and expensive movement. Of course, given the overwhelming likelihood that no one will ever actually take this watch diving, this may very well be a moot point. 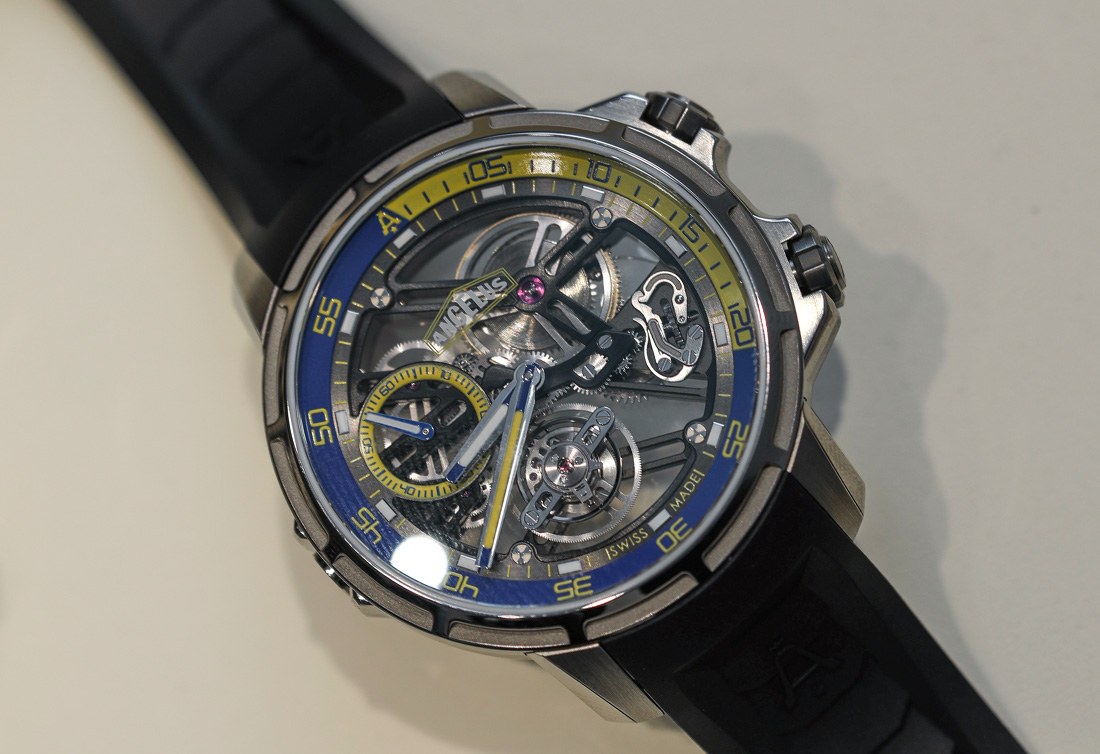 In keeping with the diving theme, the Angelus U50 is presented on a custom molded natural rubber strap, complete with a three-dimensional Angelus “A.” A signed titanium pin buckle that matches the case rounds out the aesthetic. 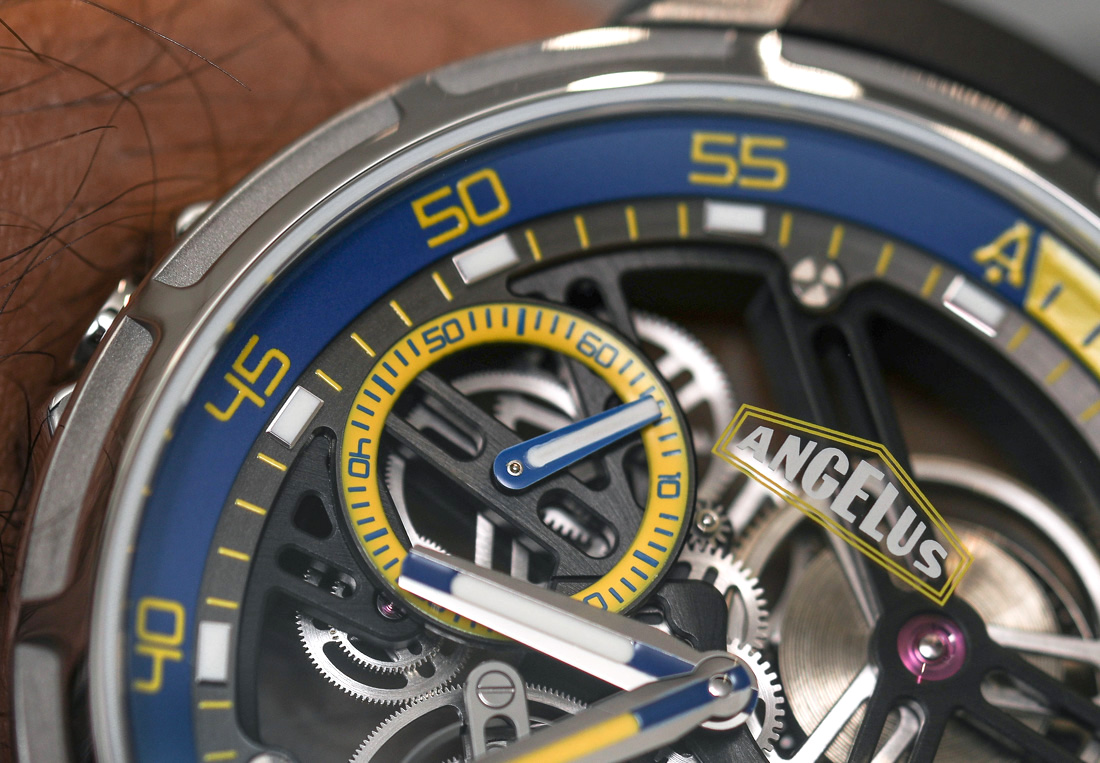 The Angelus U50 Diver Tourbillon is a beautiful example of haute watchmaking intertwined with a classic watch archetype—in this case, the archetype of the diving watch. Taking their customary high level of design and watchmaking and manifesting it in a water resistant package demonstrates Angelus’ ability to defy convention and push boundaries. While many, including myself, would argue this isn’t a true diving watch, the U50 does check all the essential boxes for a diver while presenting a sporty character. For the fan of both fine watchmaking and diving with a not insignificant 29,700 CHF to spare, the Angelus U50 Diver Tourbillon might make the perfect choice. angelus-watches.com