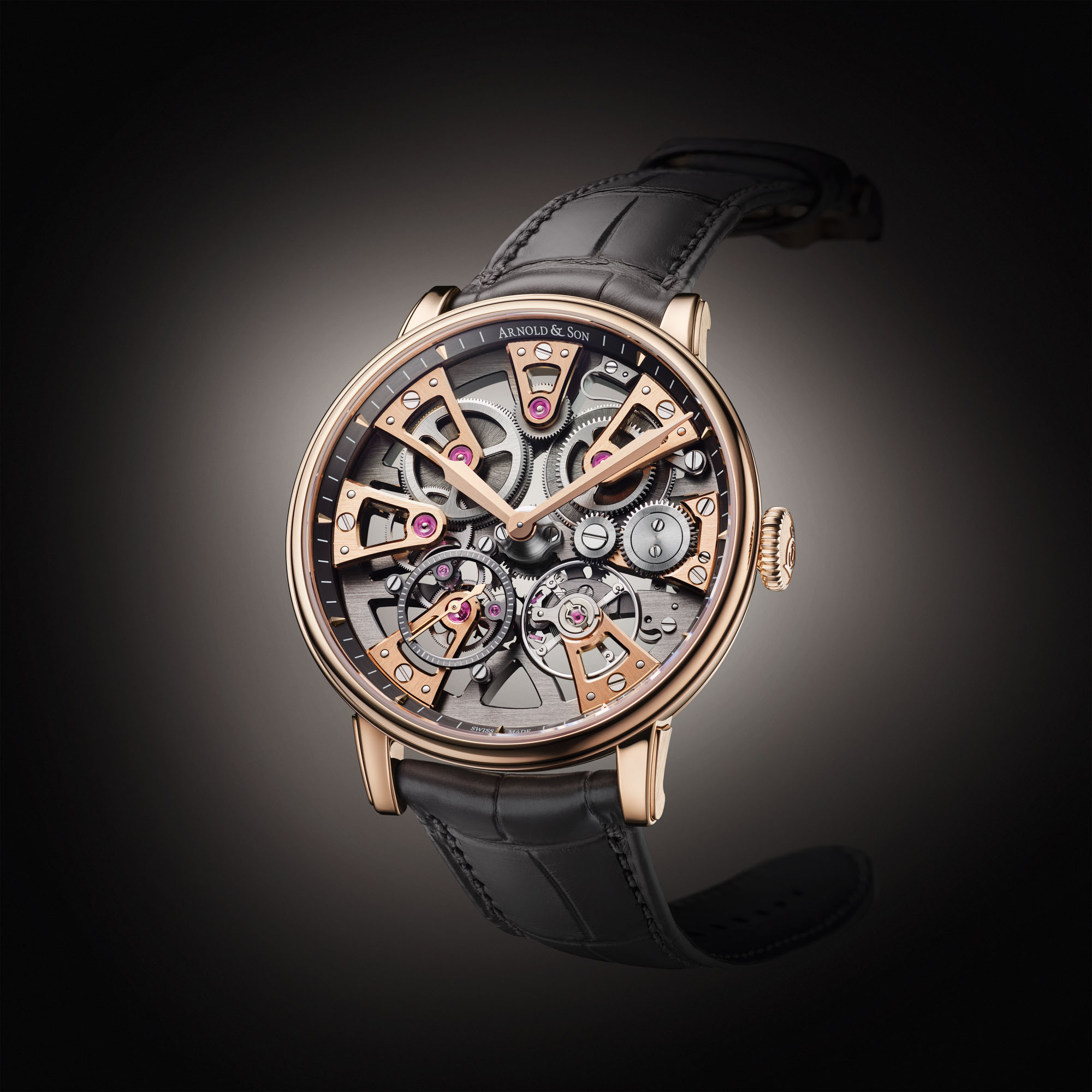 Back in 2016, Arnold & Son unveiled its first Nebula watch, which combined a traditional round case with a skeletonized movement that offers a unique and symmetrical star-shaped layout. With no traditional dial whatsoever, the appearance of the Arnold & Son Nebula largely consists of just its movement, and the brand has released a handful of different variations over the years, spanning two different case sizes and including a variety of different materials and surface finishing techniques. The latest new release from Arnold & Son is a pair of Nebula watches in both 38mm and 41.5mm case sizes that are crafted from solid 18k red gold and incorporate a refined gray and gold color profile across the various plates and bridges of their skeletonized in-house movements. 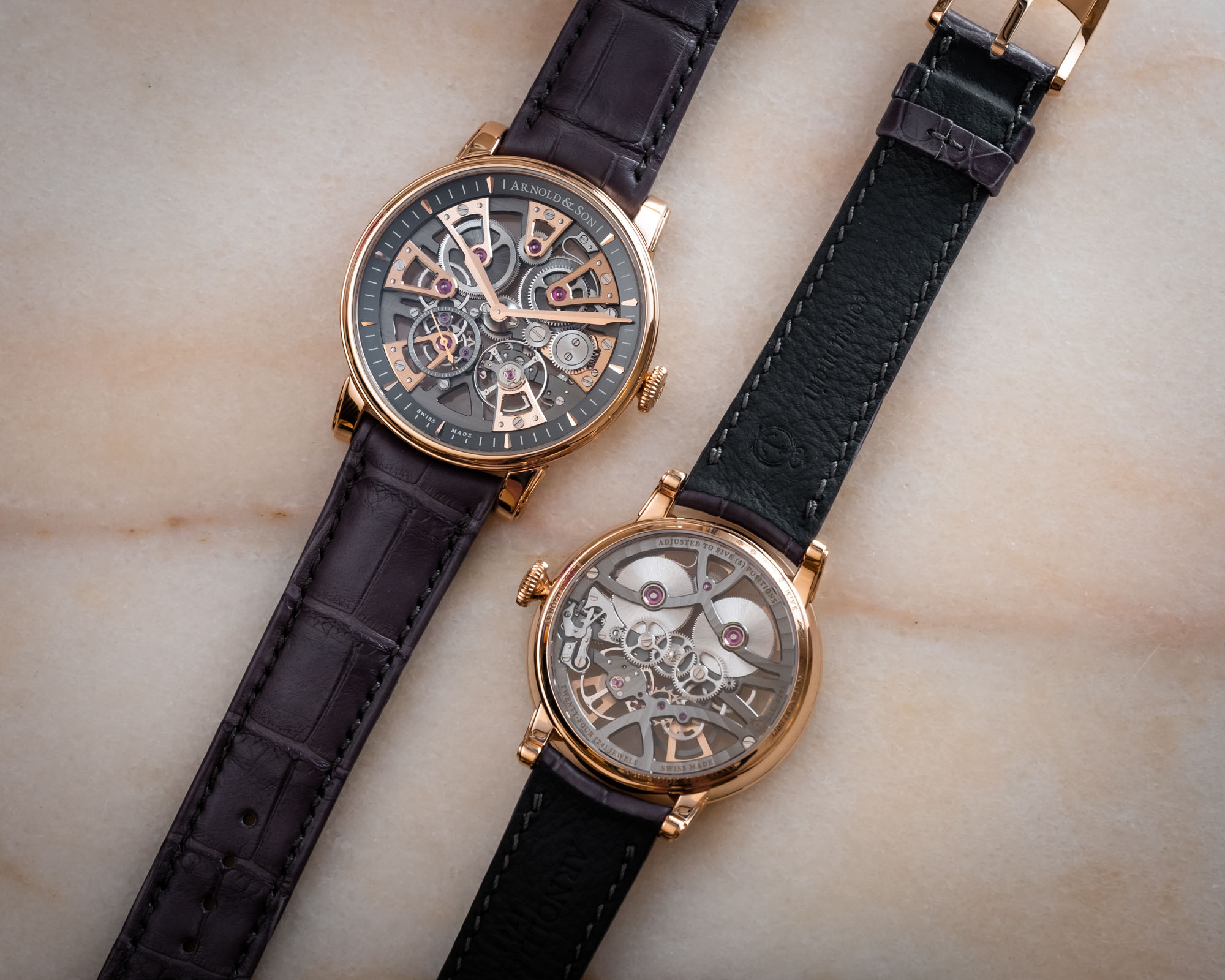 Although the new Arnold & Son Golden Nebula watches are available in either 38mm or 41.5mm cases, both versions are crafted entirely from 18k red gold, and both models measure the same 8.73mm thick. On both versions of the watch, elegant stepped lugs are fitted with gray hand-stitched alligator leather straps that have matching red gold pin buckles, while signed and fluted winding crowns at the 3 o’clock location offer access to the movement. Given that the goal of a skeletonized watch is to expose as much of the internal movement as possible, a thin stepped bezel frames a subtly domed sapphire crystal above the dial, while the screw-on caseback gets fitted with another large sapphire that functions as a display window to offer an unobstructed view of the reverse side of the movement. Despite their aggressively skeletonized appearance, the cases of Arnold & Son’s Nebula models are otherwise fairly similar to what you get with traditional dress watches, and since contending with rugged use isn’t a priority, both of the new Golden Nebula watches are accompanied by 30 meters of water resistance to protect them from any incidental contact. 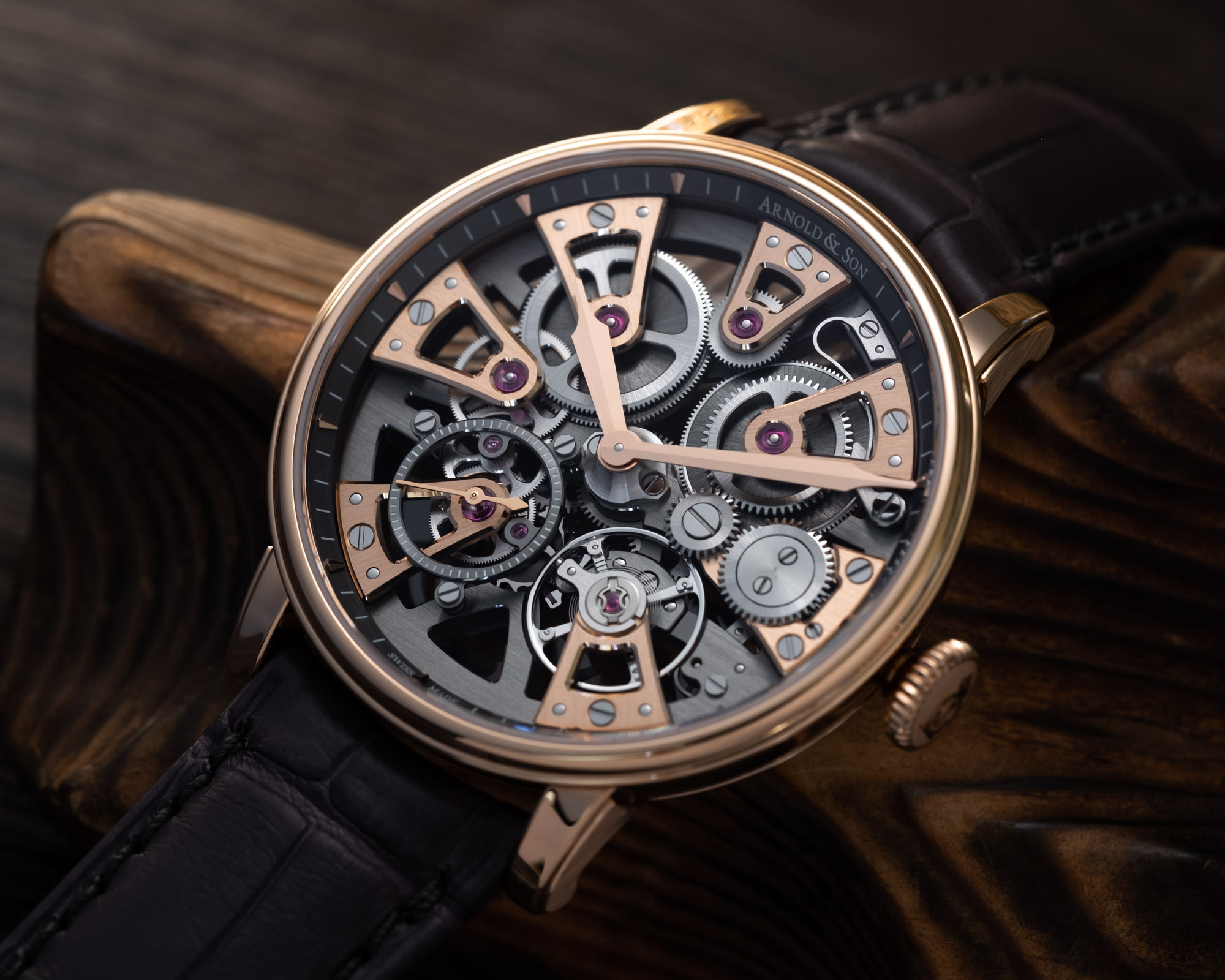 Given that the whole purpose of Arnold & Son’s Nebula watches is to showcase their three dimensional and highly skeletonized movements, none of the various models have ever featured dials (in the traditional sense of the word). The entire central section of the face of the watch is occupied by a large open-worked area with symmetrical triangular bridges pointing inward from along its outer perimeter to create the star-shaped appearance that is characteristic of the Nebula collection. On this latest duo of Arnold & Son Golden Nebula watches, the skeletonized mainplate is given an anthracite gray finish using an NAC treatment with a galvanic bath fed by metals that are related to platinum. Meanwhile, the seven triangular bridges placed along the outer edge appear in 18k red gold to unite the movement and the case with a cohesive overall appearance. 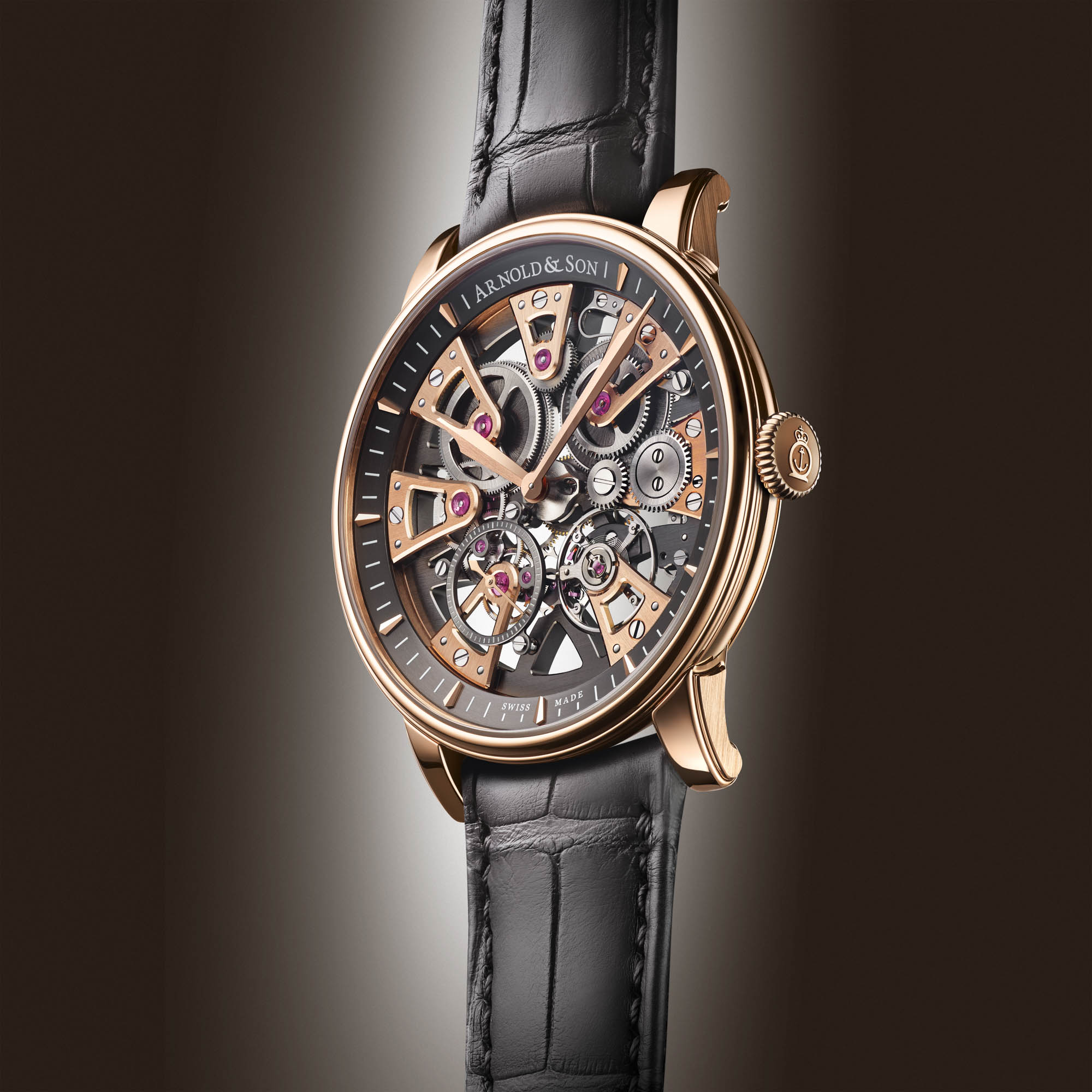 Due to the fact that both the 38mm and 41.5mm models use the same exact movement, the proportions of the two watches appear slightly different. In order  to account for its larger case diameter, the 41.5mm version of the Arnold & Son Nebula Gold features a wider chapter ring surrounding the periphery of its movement, which contains both the hour markers and minute track. That said, despite their different sizes and proportions, the overall design of the chapter ring is largely the same on both versions of the watch, and it features a gray surface with a white printed minute track punctuated by applied arrow shaped hour markers in contrasting red gold. The time itself is displayed by a pair of faceted red gold syringe hands, while the running seconds is represented by a sub-dial with a thin red gold hand, which is mounted to the end of the triangular bridge located at the 7 o’clock position. 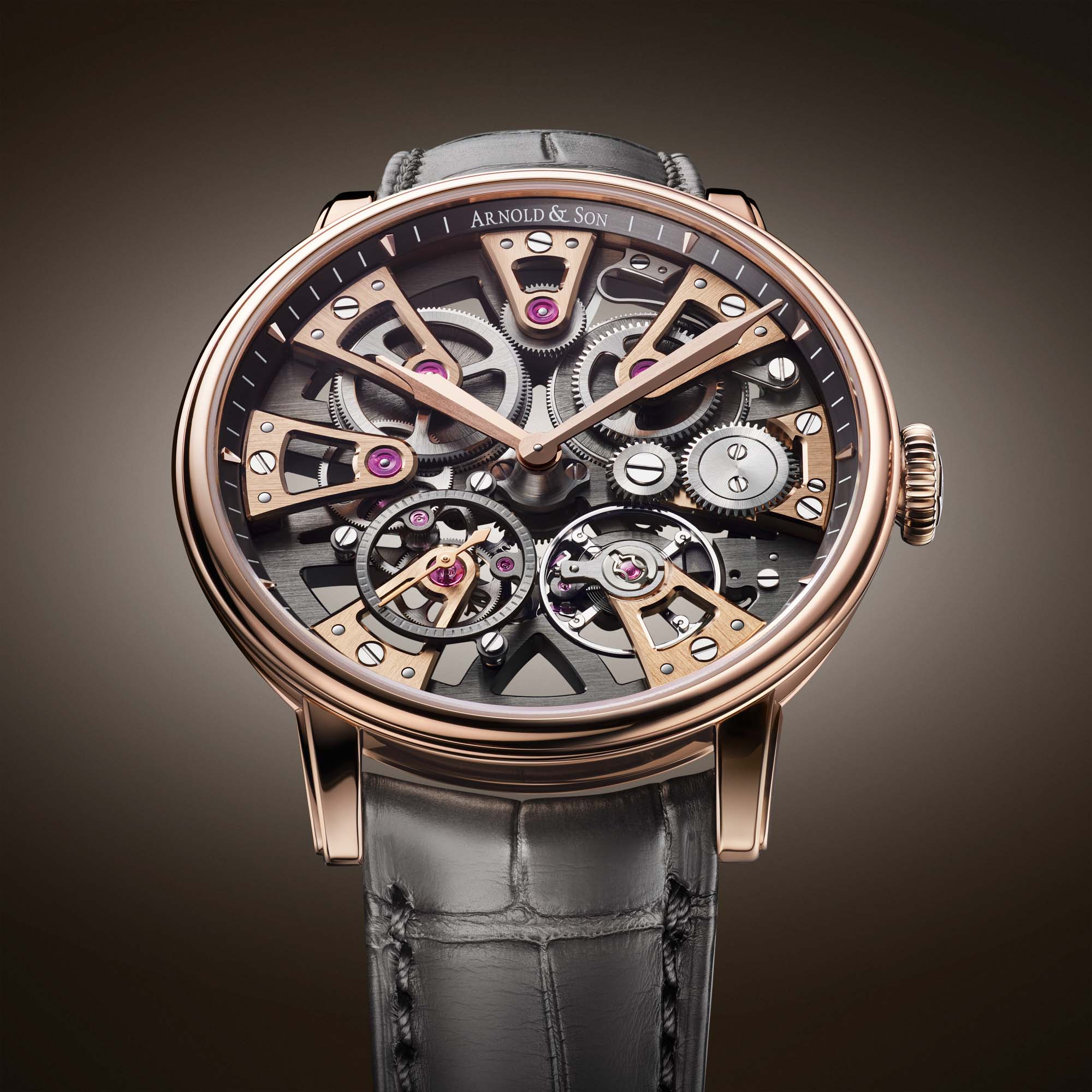 Skeletonized watches are all about their movements, and the centerpiece of the new Arnold & Son Golden Nebula watches is the brand’s Caliber A&S5201. Just like all of the movements used by Arnold & Son, the Cal. A&S5201 is entirely developed, manufactured, decorated, assembled, and adjusted by the brand at at its facilities in La Chaux-de-Fonds, Switzerland. A 24-jewel, manual-wind movement, the Arnold & Son Cal. A&S5201 runs at a frequency of 21,600vph (3 Hz) and offers users a generous power reserve of approximately 90 hours. While the specs of the movement are the same as previous generations, the finishing on the Cal. A&S5201 now offers a refined gray and gold color profile, with the open-worked red gold bridges given polished chamfers and satin finishing, while the skeletonized gray NAC-treated mainplate is adorned with a signature Arnold & Son guilloché pattern known as ‘Rayons de la Gloire’ that is visible through the display caseback of the watch. 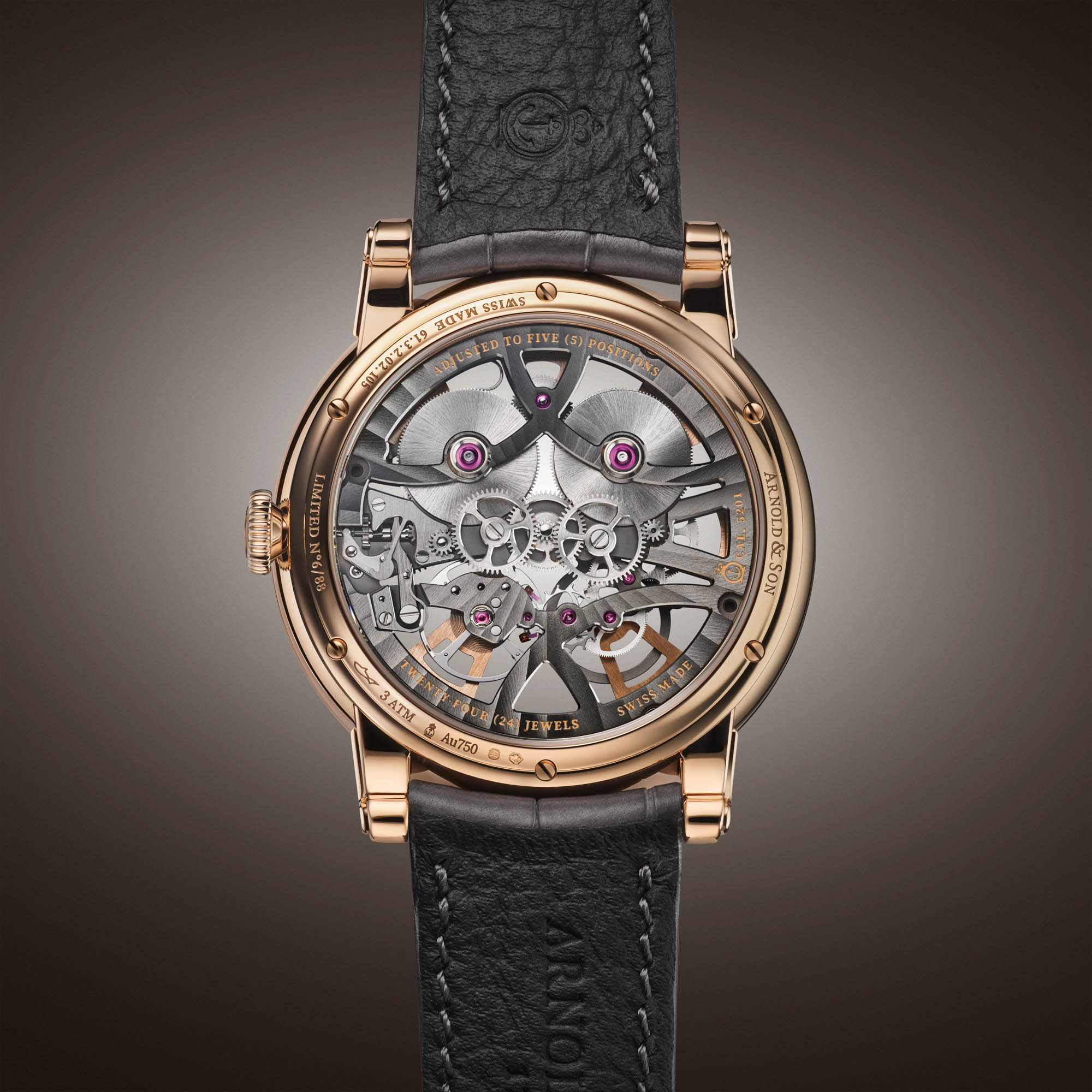 Realistically speaking, these new Arnold & Son Golden Nebula models are not completely new watches. Red gold has been featured on the Nebula series since the inaugural models debuted back in 2016, and a smaller 38mm version has been available as an option within the collection since it was first introduced by the brand in 2019. That being said, while previous red gold editions of the Arnold & Son Nebula featured movements with a largely gray/silver monochromatic appearance, the new duo of Golden Nebula models feature their triangular bridges in matching red gold for a striking and luxurious overall aesthetic that ultimately creates a much more complete overall appearance. While Arnold  & Son does offer the larger sized Nebula watch in stainless steel, these two new Golden Nebula watches are intended to be premium options within the brand’s lineup. The Arnold & Son Nebula 41.5 Gold has an official retail piece of $32,100 USD, while the Nebula 38 Gold is priced at $29,800 USD, and both models will be produced as limited editions with a total of 88 examples created for each of the two case sizes. The party piece of the Arnold & Son Nebula series is its architectural skeletonized movement, and the high-contrast gray and gold finishing does a significantly better job of accentuating its symmetrical star-shaped structure, while simultaneously providing the watches with a more elevated and luxurious appearance. For more information, please visit the brand’s website.