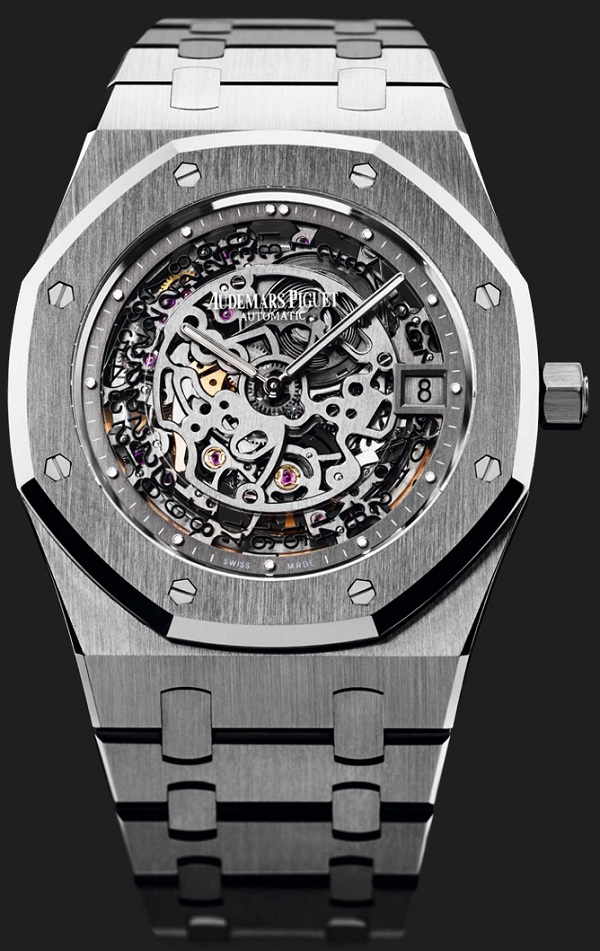 Now here is a watch that is going to be a pain for people to buy who want one. Little guys like this get wooed over when announced, a year or so seems to go by before any are actually released for sale, and then the wars begin about availability because they are so limited. With just 40 pieces to be available, expect a small fraction of that number to find their way into the United States. This is the Audemars Piguet Openworked Extra-Thin Royal Oak Limited Edition 40th Anniversary watch (ref. 15203PT.OO.1240PT.01) with a beautiful skeletonized movement and platinum case. Happy 40th anniversary Royal Oak (1972-2012).

About two years ago Audemars Piguet released a watch that for me was the predecessor to this timepiece. It was the Royal Oak Skeleton watch that I discussed hands-on here. A very cool watch, the Royal Oak Skeleton was offered in steel and rose gold. It was highly esteemed and hard to get. Price was from about $30k – $45k. Now there is a much more limited and much more exclusive version that will be available in 2012.

2012 is the 40th anniversary of the original Royal Oak watch designed by Gerald Genta for Audemars Piguet. In addition to some other special models that I anticipate AP releasing, this watch is a fun tribute to the history of the iconic luxury sports watch. It is also a beautiful execution of skeletonization and mechanics. 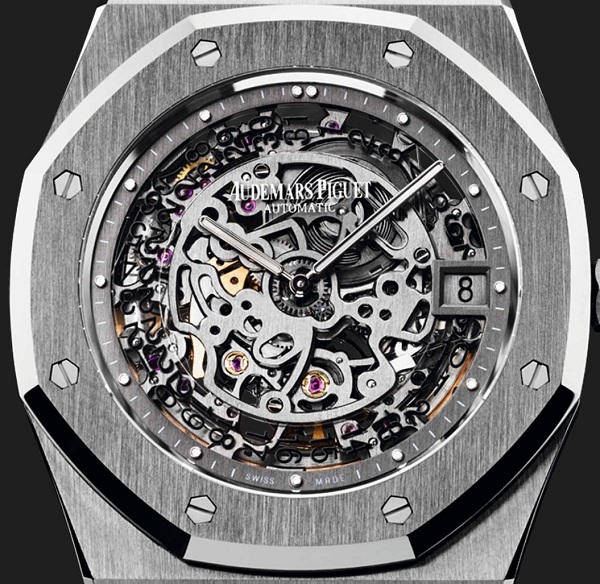 Inside the AP Royal Oak Extra-Thin Royal Oak is a delicately cut in-house made Audemars Piguet calibre 5122 automatic movement. Compared the previous skeletonized model this one offers a different dial. The skeletonization is again mixed with a high degree of legibility and function (not the lumed hour markers, hands, and minute scale). No trade-off here between function and aesthetics. This model also has the date, and a thin movement that is 3.05mm wide. The rotor is in 22k gold with a lovely AP initials engraving.

Audemars Piguet makes a statement about how thin the case is. Though unfortunately they don’t publish the case thickness. Though even the standard Royal Oak is a thin watch as it is. The Openworked Extra-Thin Royal Oak is 39mm wide just like the original 1972 Royal Oak. The bracelet is lovely as always and the design looks as pleasing today as it did 40 years ago. Talk about timeless.

Offered in platinum the case is an interesting contradiction to the original. Why? Well think about it. AP is much credited with creating the luxury steel sport watch segment. Selling a steel watch at gold watch prices and having it somehow make sense was a revolution at the time. They, along with other brands such as Patek Philippe, made steel the new gold in a lot of segments. So it is interesting that the 40th anniversary tribute model be in luxurious platinum. Still cool, and makes for a good conversion topic. You know how AP lover’s like to chat.

As a platinum watch the AP Openworked Extra-Thin Royal Oak Limited Edition 40th Anniversary watch will be a pricey specimen. We don’t know the exact price until early in 2012 though. 40 pieces only and I can’t wait to try one on.