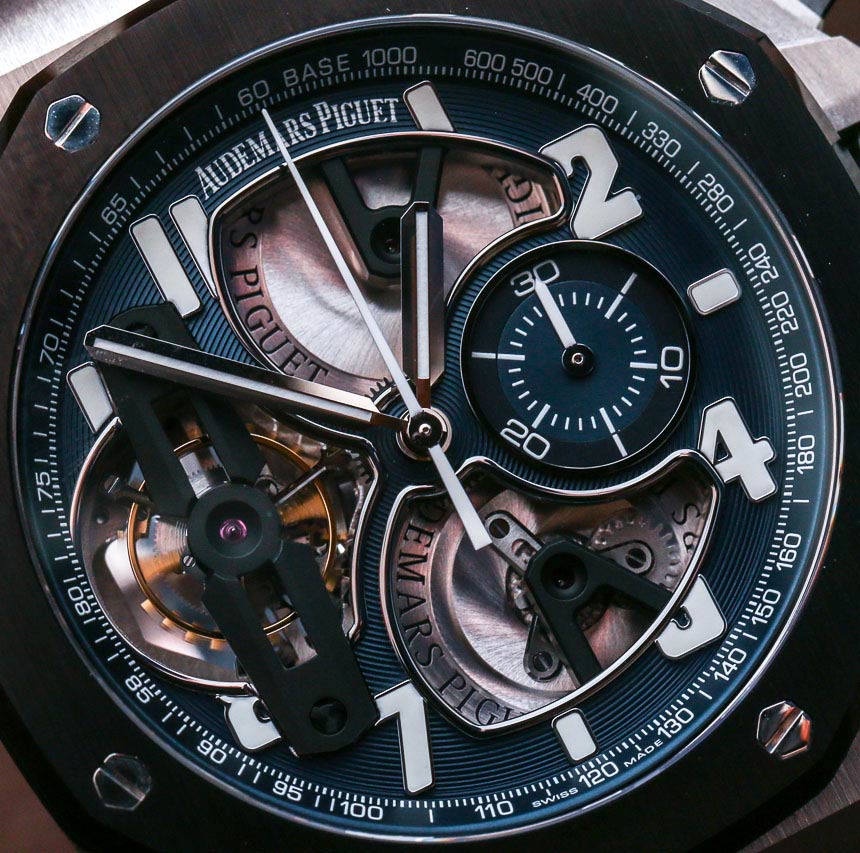 Given the open look of the dial, it is still pleasantly legible. What remains of the large Arabic numeral hour markers is filled with SuperLumiNova luminant, and the hands are, as always on Royal Oak Offshore watches, easy to read. Of course, there is also the matter of the chronograph, which makes use of the central seconds hand and the subdial. Finishing and decor on the caliber 2912 movement is done much by hand. That is often the case on high-end timepieces such as the Audemars Piguet Royal Oak Offshore Tourbillon Chronograph. So what about wearing it? 44mm wide isn’t always big, but it certainly can be with a Royal Oak Offshore case design. That is because of not only the lug width, but also the lug length. So while the watch case isn’t inherently “that” wide, it is long, which means you’ll need to be “big-wristed” for the entire Royal Oak Offshore Tourbillon Chronograph case to fit on your wrist. Of course it feels incredibly solid given the mostly platinum case construction.

The Audemars Piguet Royal Oak Offshore Tourbillon Chronograph also makes use of ceramic, as many modern Royal Oak Offshore watches do. Black ceramic is used for the bezel, crown, and chronograph pushers. Ceramic as a material is very scratch resistant and has nice sharp angles, so it is often preferred in high-end watch making. Having said that, I recall an interesting comment someone said about the ceramic crown. They said they missed the old rubber crown as it has a “warmer” feel to it. I found that to be quite interesting. The case is further water resistant to 100 meters and is sandwiched with AR-coated sapphire crystals.