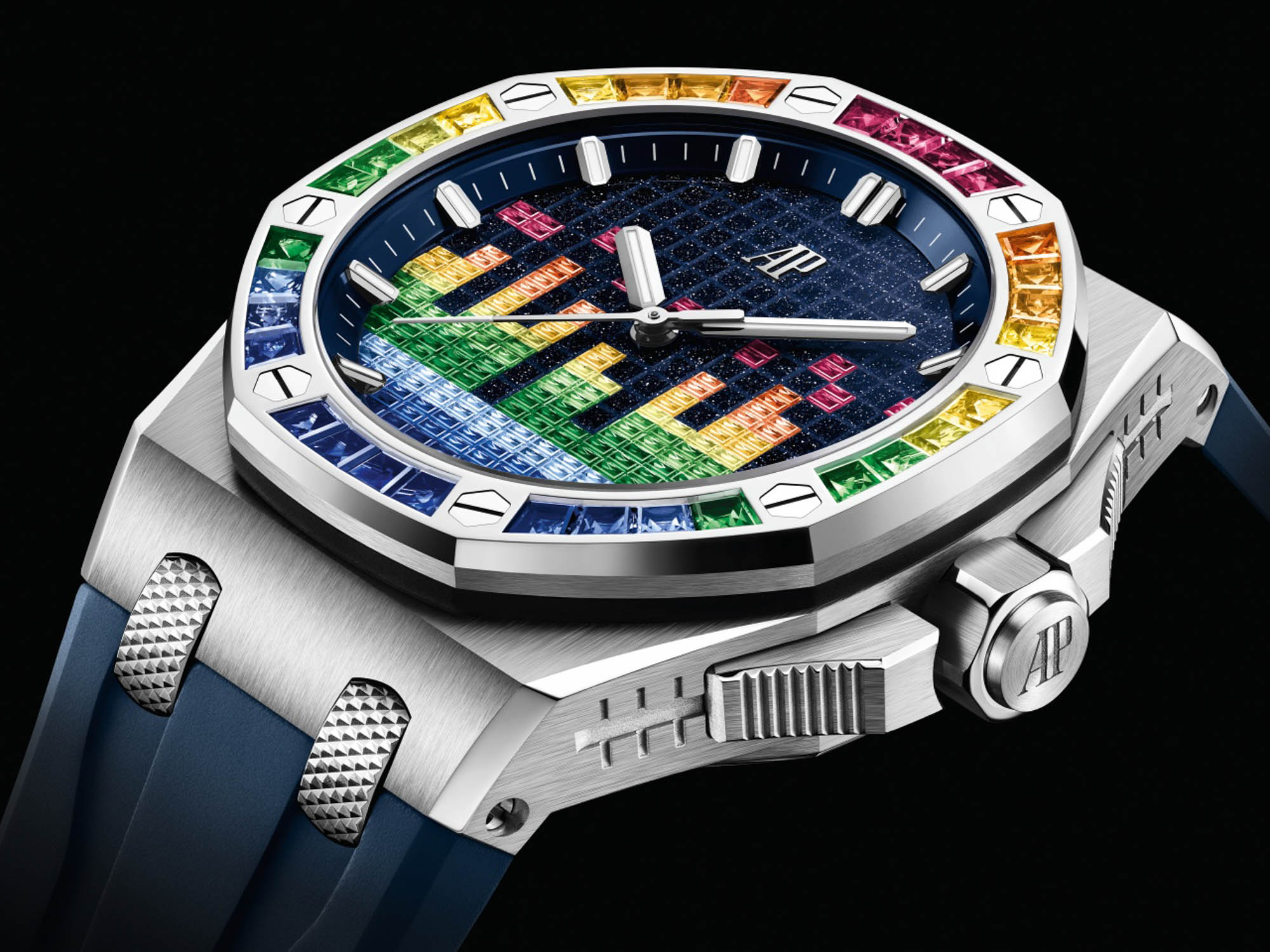 Time and music are closely related, and regardless of the specific genre or the artist who creates it, all music can be described as different sounds organized in patterns that are based upon time. Representing this connection between timekeeping and music and celebrating the manufacturer’s close relationships with various famous artists throughout the music industry, Audemars Piguet has unveiled five new Royal Oak Offshore models that are inspired by recording studios and the world of live music. The new watches include both 37mm and 43mm sizes and feature cases crafted from either 18k white gold, titanium, or black ceramic that are paired with Tapisserie dials inspired by the VU meter lights found on recording consoles. 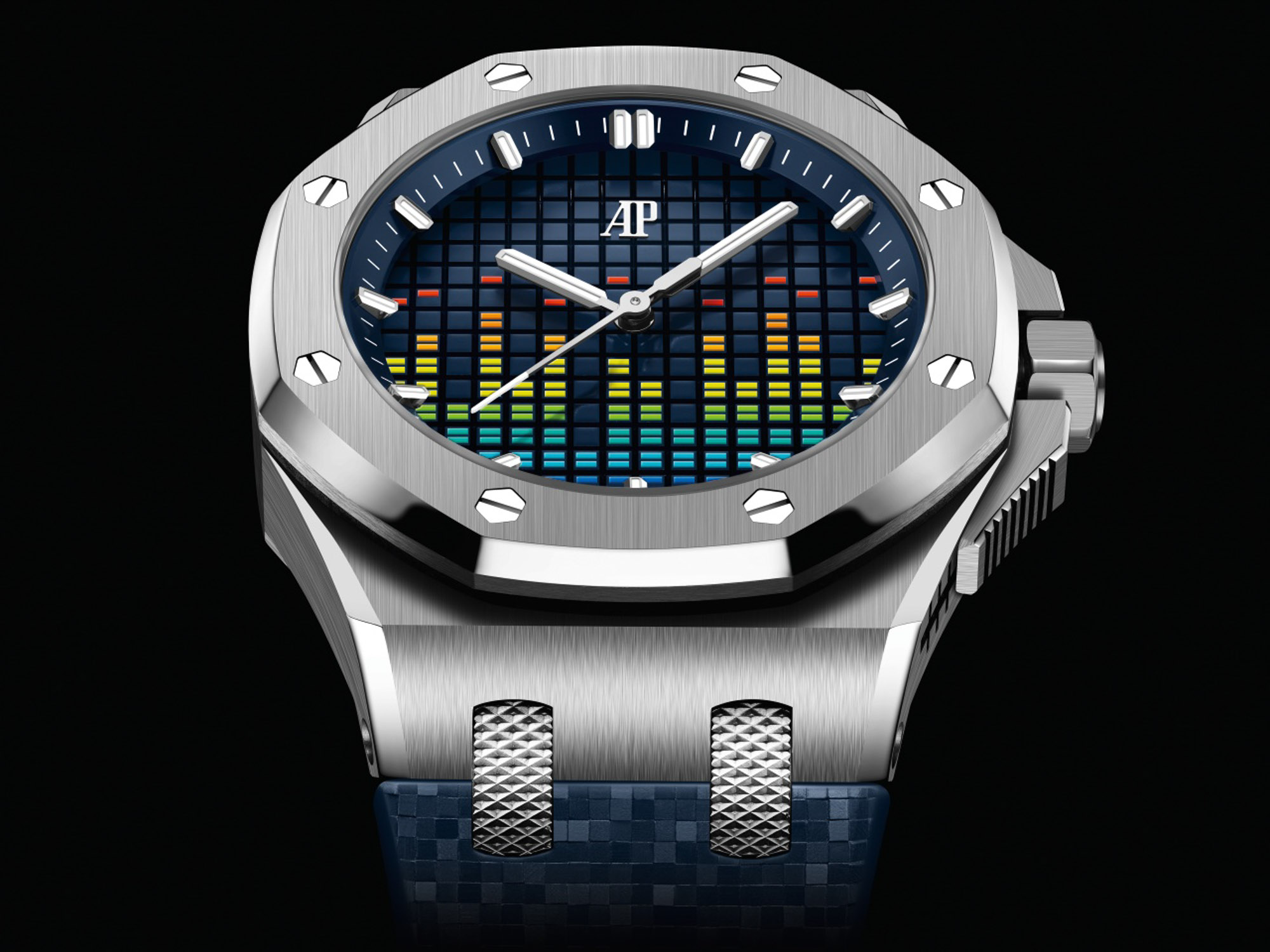 The titanium and white-gold versions of the Audemars Piguet Royal Oak Offshore Selfwinding Music Edition are offered in both 37mm and 43mm sizes, while the black ceramic model is exclusively available in 43mm. The cases of the new models follow the Offshore collection’s bold rendition of the original Royal Oak’s angular shape and include its iconic octagonal bezel fitted to their top surfaces for an instantly recognizable overall appearance. However, while the titanium and black ceramic models are fitted with standard bezels crafted from their respective case materials, the two white-gold editions feature bezels set with rainbow-colored “Harmony-cut” gemstones (rubies, tsavorites, and multiple colors of sapphire) that mirror the colors of the VU meter motif on their dials.

As a further nod to the music industry and the equipment found inside recording studios, all of the new Audemars Piguet Royal Oak Offshore Music Edition watches feature crown guards that are shaped like the faders on mixing consoles, complete with track engravings next to them on the side of the case. Beyond that, the small center links that connect the case of the watch to their straps are finished with a distinct knurled-texture that mirrors the pattern found on the ends of cable jacks. Similarly, all of the AP Royal Oak Offshore Music Edition watches include an anti-glare sapphire crystal fitted above their dials, along with a second one placed in the center of their display casebacks to offer an unobstructed view of their self-winding movements. In between the fader-inspired crown guards resides a screw-down winding crown, which offers either 50 meters (37mm models), or 100 meters (43mm models) of water resistance. 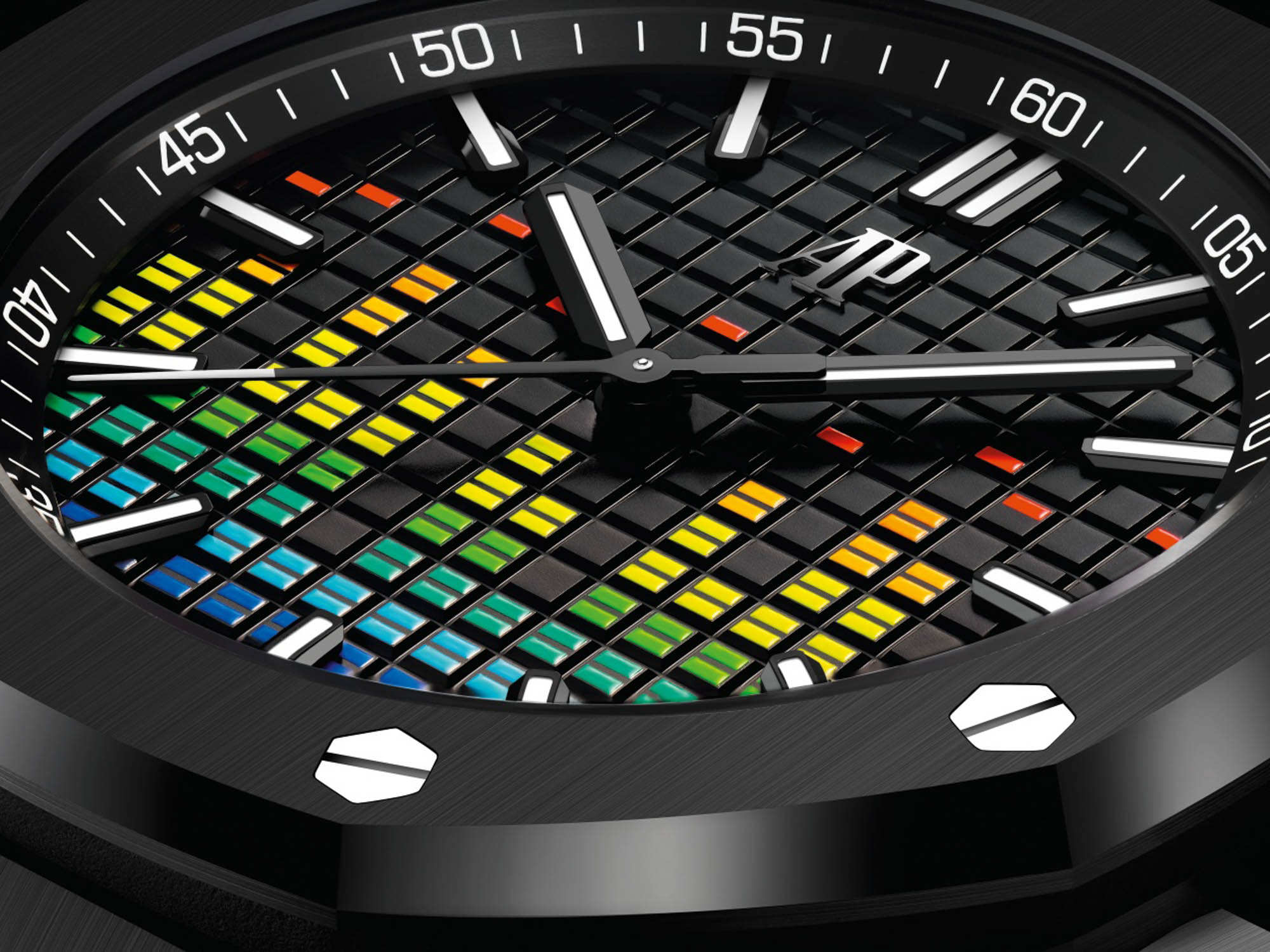 The new Audemars Piguet Royal Oak Offshore Selfwinding Music Edition watches all feature time-only dials that mirror the appearance of VU meter lights like the ones found on the equalizers of audio mixers or recording consoles. While the dials themselves still feature the Royal Oak collection’s signature Tapisserie aesthetic, the familiar grid-like appearance is now home to numerous multi-colored rectangles that start on the bottom and move towards the top of the dial, changing in color the higher they get, just like the lights of a VU meter.

Although all of the dials offer this same equalizer motif, they are not the same across all of the different watches. The two titanium models feature blue backgrounds with their colorful VU meters printed on their surfaces, while the black ceramic version includes a black background for its printed VU meter. However, both 37mm and 43mm white-gold models feature blue aventurine dials, which have the different colors of their VU meters created by multicolored “Harmony-cut” gemstones (rubies, peridots, tsavorites, and sapphire) that are invisible-set into their surfaces. On all of the dials, applied white-gold hour markers and matching luminous hands display the time of day, while an angled chapter ring in either black or blue serves as the minute track. 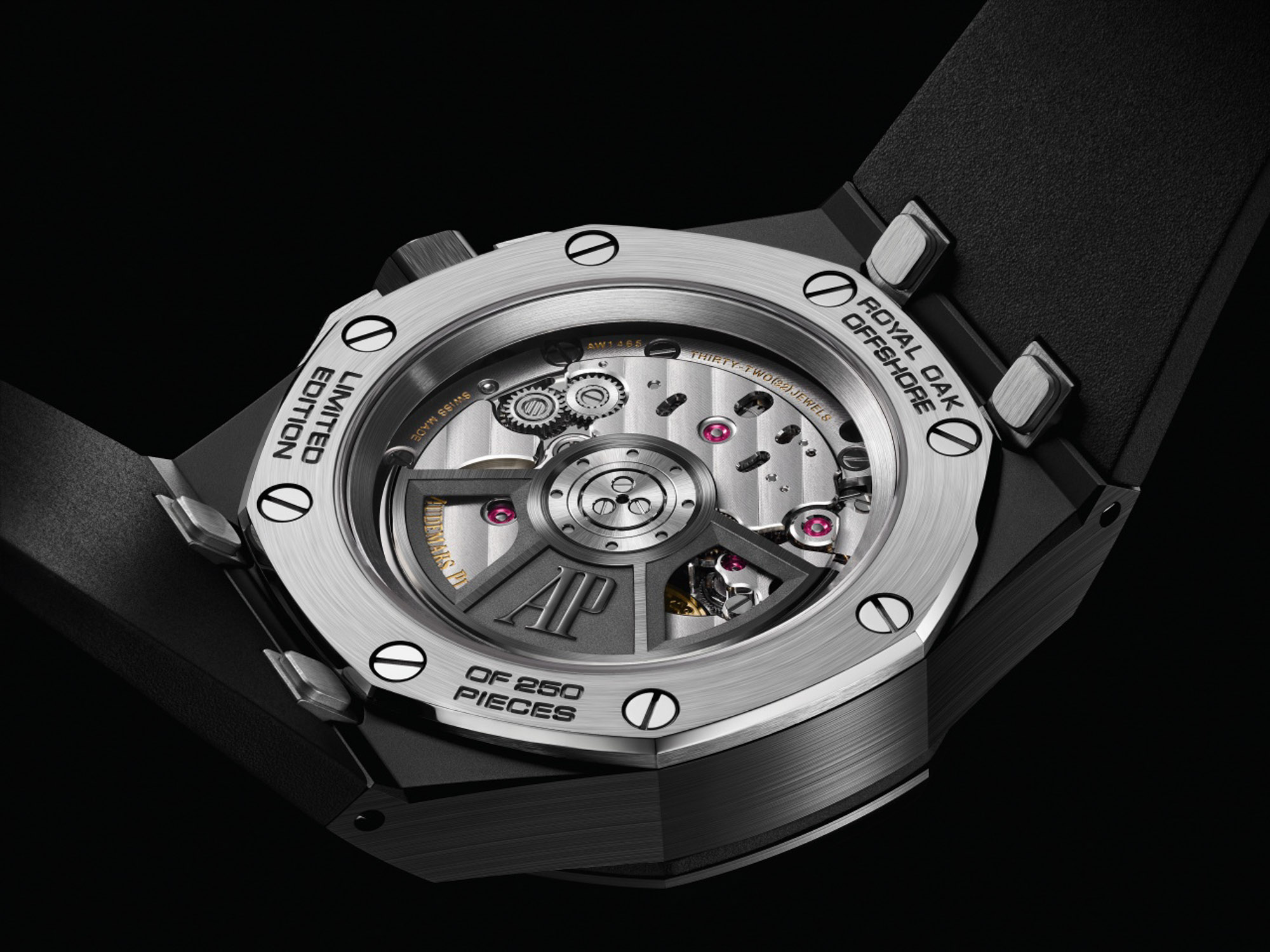 Powering the two 37mm versions of Audemars Piguet Royal Oak Offshore Selfwinding Music Edition is the Caliber 5909 movement, while the three different 43mm models all run on the Caliber 4309. Both in-house movements feature three-handed time-only displays and run at a standard frequency of 28,800vph. However, the larger size of the Caliber 4309 means that it is able to achieve a longer power reserve than its more compact sibling, and it offers users 70 hours of autonomy compared to the 60-hour power reserve of the Caliber 5909.

All of the new Audemars Piguet Royal Oak Offshore Selfwinding Music Edition come with a quartet of rubber straps consisting of one in either black or blue to match their dials, along with three alternate options in turquoise, yellow and green. Additionally, the straps for the 37mm models include a “mosaic effect” pattern on their surfaces and they include the same interchangeable strap system that first debuted on the full-size Offshore collection in 2021. Fitted to the straps of the titanium and ceramic models are titanium pin buckles, while the two white-gold editions receive matching folding clasps made from 18k white gold. 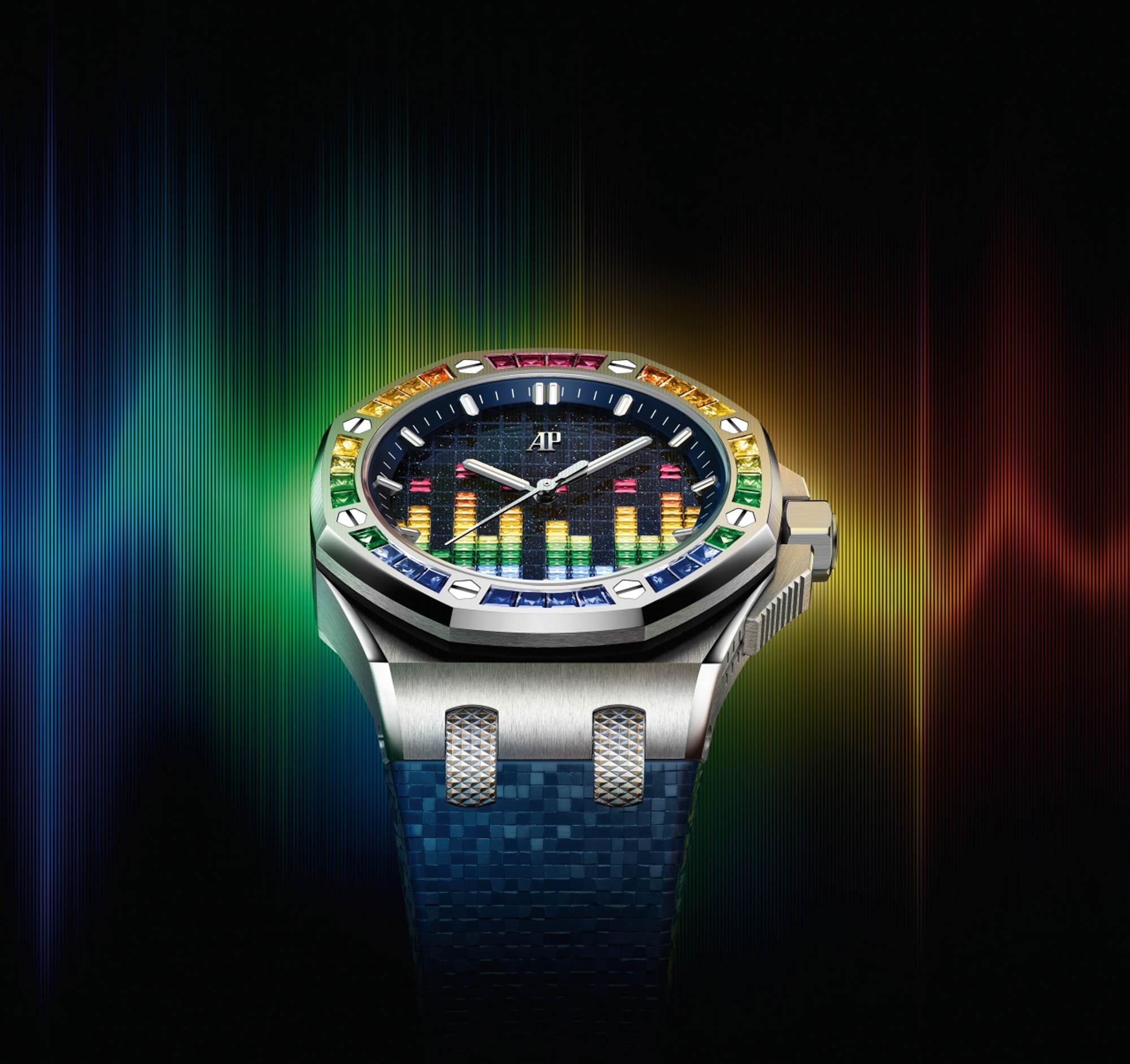 Despite being one of the luxury watch industry’s most prestigious manufacturers and having a history that dates all the way back to 1875, Audemars Piguet has never been afraid of shaking things up a bit and releasing something a bit unconventional. The very first Royal Oak was seen as a groundbreaking design when it first appeared in 1972, and models such as the Audemars Piguet Royal Oak Offshore Selfwinding Music Edition challenge the notion that expensive watches always need to be serious items.

Production of the two titanium versions of the Audemars Piguet Royal Oak Offshore Selfwinding Music Edition watches will each be limited to 500 pieces, with the 37mm model (ref. 77600TI.OO.A343CA.01) accompanied by an official retail price of $29,100 USD, while the 43mm model (ref. 15600TI.OO.A343CA.01) will be priced at $31,700 USD. The black ceramic version (ref. 15600CE.OO.A002CA.01) will be produced as a limited edition of 250 examples worldwide with an official retail price of $40,500 USD, and while neither of the two while gold models are limited in their production number, you can guarantee they will be quite a bit more expensive than their siblings with the price falling into the “upon request” territory. For more information, please visit the manufacturer’s website.