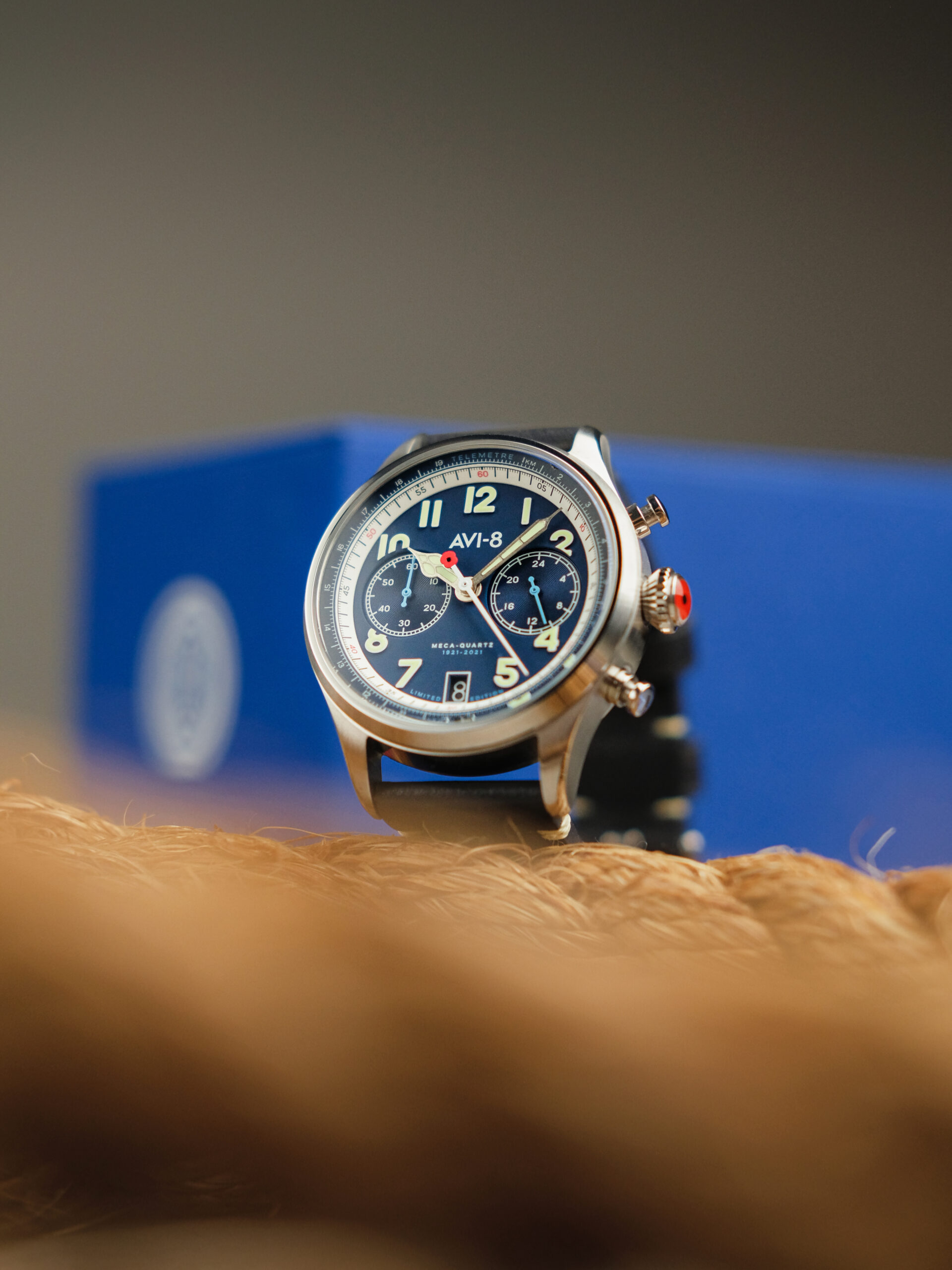 Appealing to watch collectors and flight enthusiasts alike, watch brand AVI-8 prides itself on creating thoughtfully designed pilot watches that pay homage to famous aircraft, aeronautical history, and the people who have played a pivotal role in the history of aviation. Recently, the brand has teamed up with the Royal British Legion — a charity aimed at providing recovery and rehabilitation support to veterans and members of the Royal Navy, British Army, and Royal Air Force — to create a series of commemorative watches. 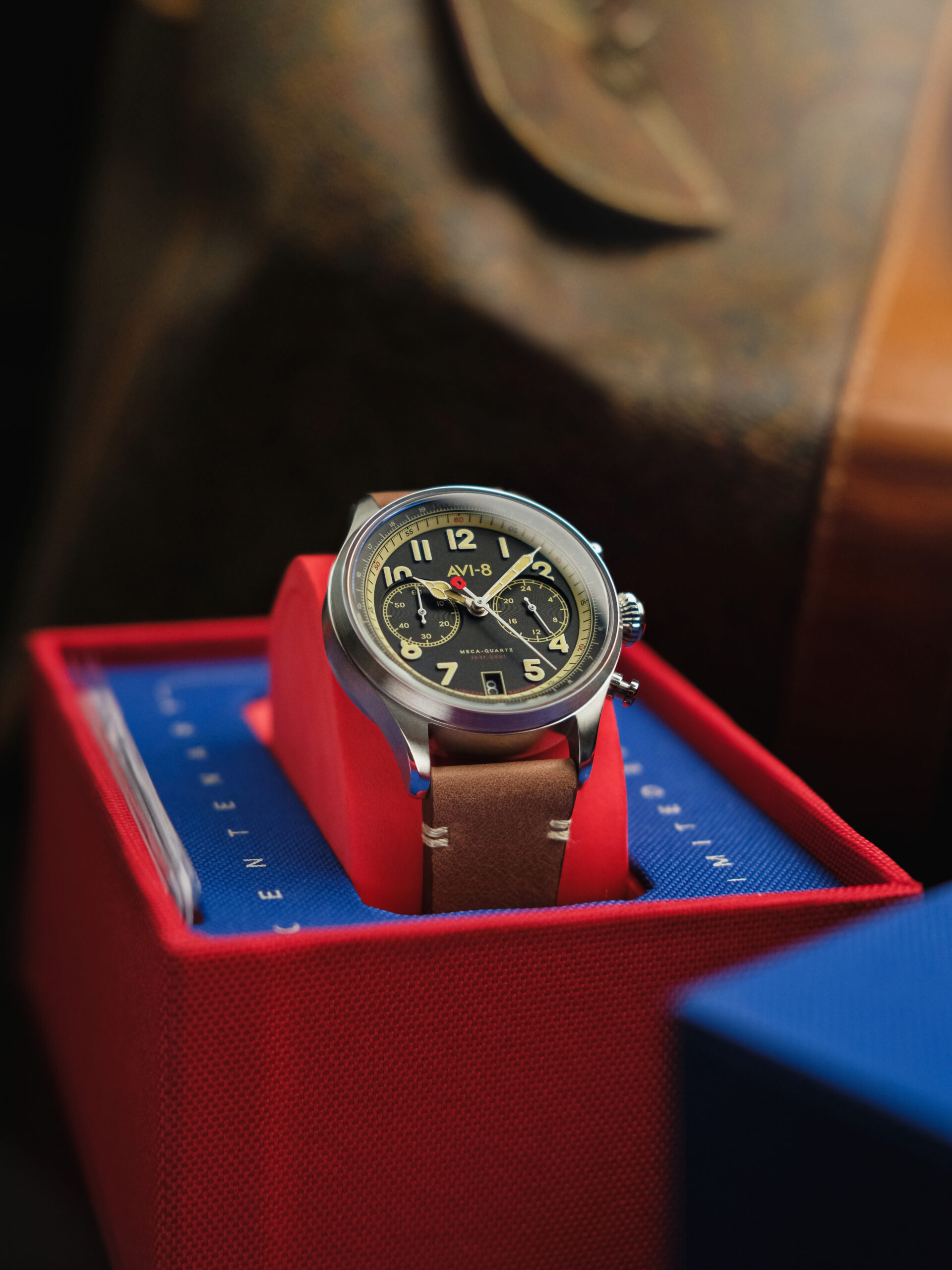 The Flyboy Royal British Legion Founder’s Chronograph features a balanced, legible aesthetic distinguished by bold Arabic numerals, cathedral hands, and an oversized “onion” crown. The stainless steel case is a wearable 40mm in diameter and 12mm in thickness, making for a somewhat refined feel on the wrist relative to other pilot chronographs, which often feature significantly larger cases. 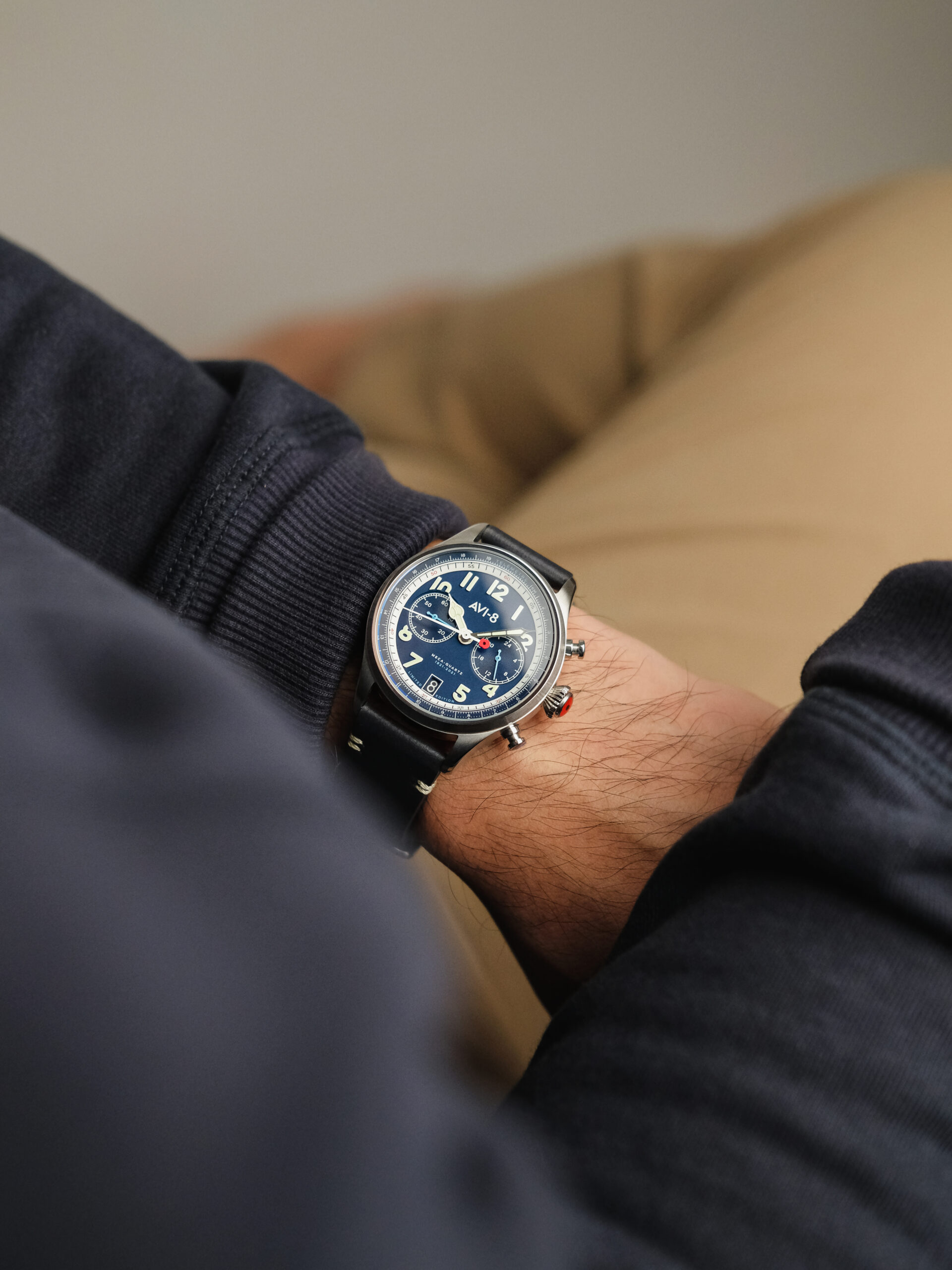 The Founder’s Chronograph is available in two colorways: Heritage Brown and Royal Blue. While both variations evoke the spirit of a vintage military jet, the Heritage Brown piece sports a warmer, more homogenous aesthetic; the Royal Blue feels more modern and offers a bit more “pop,” thanks to its stark white chapter ring and electric blue accents. Regardless, it’s safe to say that both are quite striking, and either would pair well with a worn bomber jacket and some lace-up leather boots.

Under the hood is a dependable Japanese “meca-quartz” chronograph movement with a date complication. Described by AVI-8 as the “best of both worlds,” a meca-quartz movement is powered by a battery, yet features a smooth, sweeping seconds hand as well as a flyback chronograph reset function — two features that are normally only found on chronographs with mechanical movements. Accordingly, the Founder’s Chronograph offers collectors the opportunity to own a chronograph with quartz accuracy and the feel of a mechanical movement. 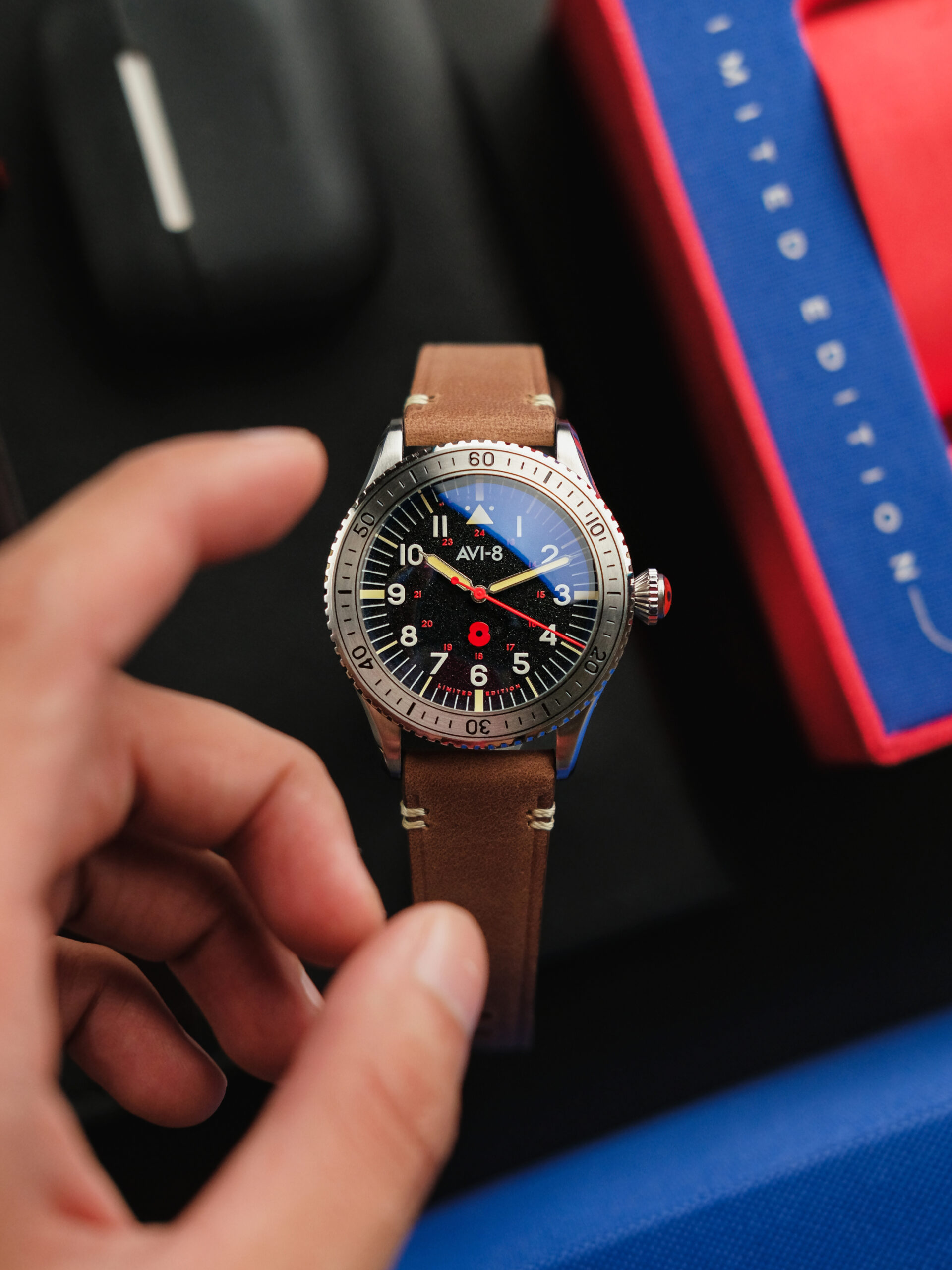 Similar to the Founder’s Chronograph, the Flyboy Royal British Legion Chairman’s Meca-Quartz sports a clean, legible aesthetic with Arabic numerals, a 40mm case, and an “onion” style crown. With no date window, the Chairman’s Meca-Quartz will appeal to purists and those who prefer the more symmetrical look of a dateless dial. Its clean design profile is accentuated by sandy beige accents, syringe hands, and a bright red 24-hour scale. The piece is available in two colorways: Vintage Brown and Vintage Black. As one would expect, the Vintage Brown gives off a more classic vibe, while the Vintage Black is bold and contemporary.

Like the Founder’s Chronograph, the Chairman’s Limited Edition is powered by a meca-quartz movement. While it doesn’t feature a chronograph complication, the Chairman’s Meca-Quartz offers users the ability to time things “the old-fashioned way” thanks to its uni-directional dive bezel. 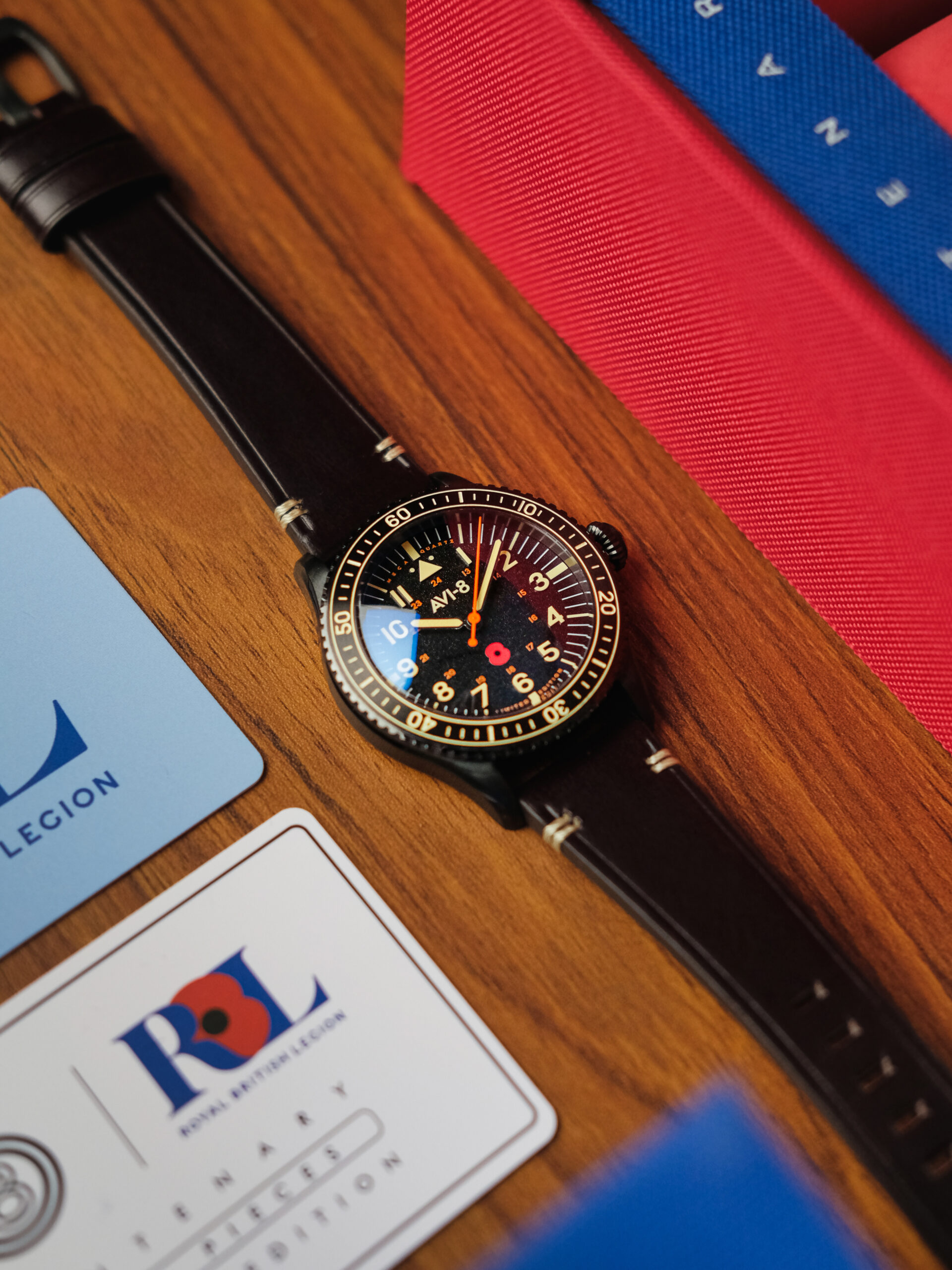 At a quick glance, it’s obvious that both the Founder’s and Chairman’s Limited Editions feature charming, well-executed designs. However, upon taking a closer look, it’s the small, thoughtful details that really set these two watches apart from other comparable pilot watches.

One notable, obvious design trait common to both watches is the large, oversized “onion” crown. Drawing inspiration from the trench watches of the early 20th century, it is a design trait that not only adds to the functionality of the watch, it also adds a whole lot of character to the design. Topping the crown is a bright red “two-petal poppy,” an iconic and enduring symbol of support for British Armed Forces of past and present. The same symbol can be found at the base of the chronograph second hand on the Founder’s Chronograph and above the 6 o’clock marker on the Chairman’s Meca-Quartz.

Moreover, both the Founder’s Chronograph and the Chairman’s Meca-Quartz have finely grained, multi-layered dials that feature impressive dimensionality, keeping their simple, pared-down designs dynamic and interesting. Both dials benefit from tasteful pops of color and luminescent paint applied to both the hands and indices, making for ample low-light legibility. The aesthetic of the watches is complemented by a military-inspired side-stitch strap, which is supple right out of the box and suits each respective piece quite nicely.

Each of the 1000 limited edition timepieces is individually numbered and comes packaged in a striking blue and red gift box, resembling the Royal British Legion’s branding. Each watch comes complete with a complimentary Royal British Legion poppy pin, to wear in support of the fallen. 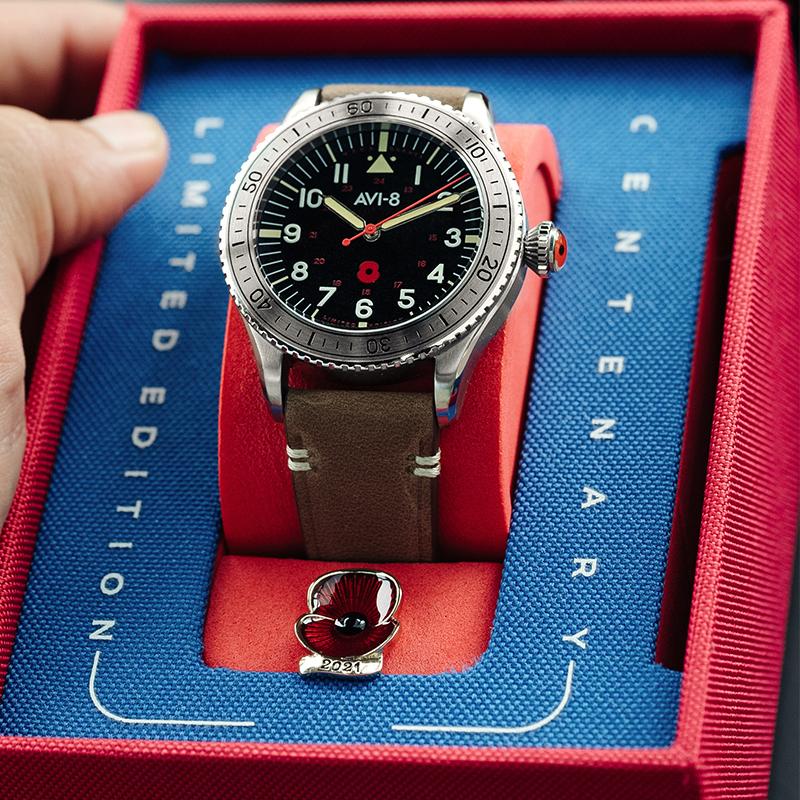