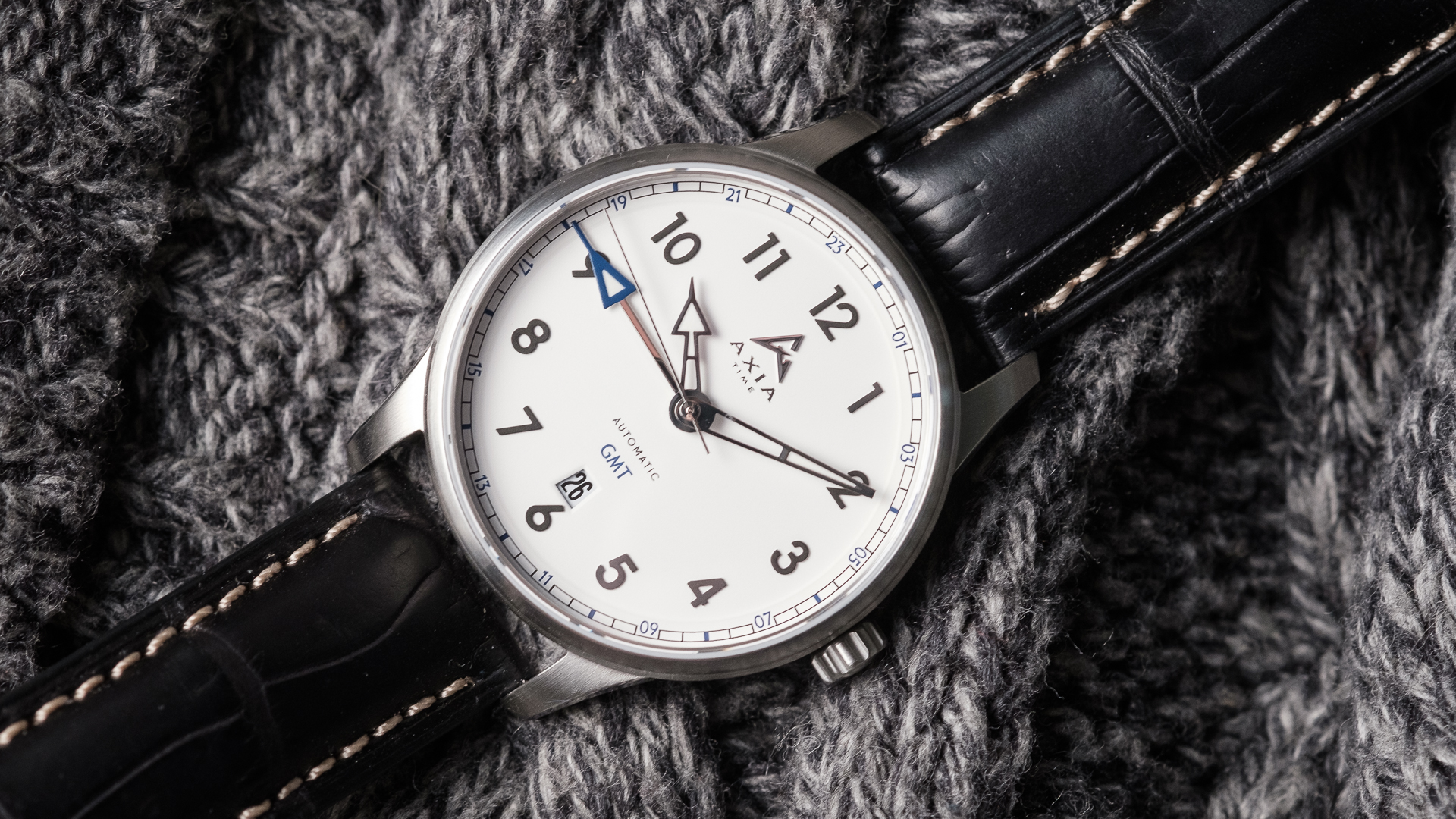 Before being offered this piece to review, I had never heard of Axia Time. I think this is one of the significant challenges for independent watch brands that want to operate in the sub-$1k market: it is crowded. As a consumer, this isn’t a bad thing. It provides us with a plethora of options and brands that want to compete tooth and nail for your hard-earned dollars. As a brand, however, this must be incredibly challenging (and frustrating, I’d imagine).

Axia attempts valiantly to provide a good option when it comes to a pilots/travelers GMT with their Kronos collection. I do believe that this attempt falls a little short of Axia’s competition, but we’ll discuss that in detail as the review goes on.

For now, the Kronos is a 40mm steel GMT. Axia states that the Kronos will be available in an edition of 500 pieces per dial color, but at this time, it appears that only a white-dialed version is available. I’m not sure if that’s due to other versions being sold out or just that they haven’t been released yet. It ships on a genuine alligator strap and comes in a pretty slick carrying case. 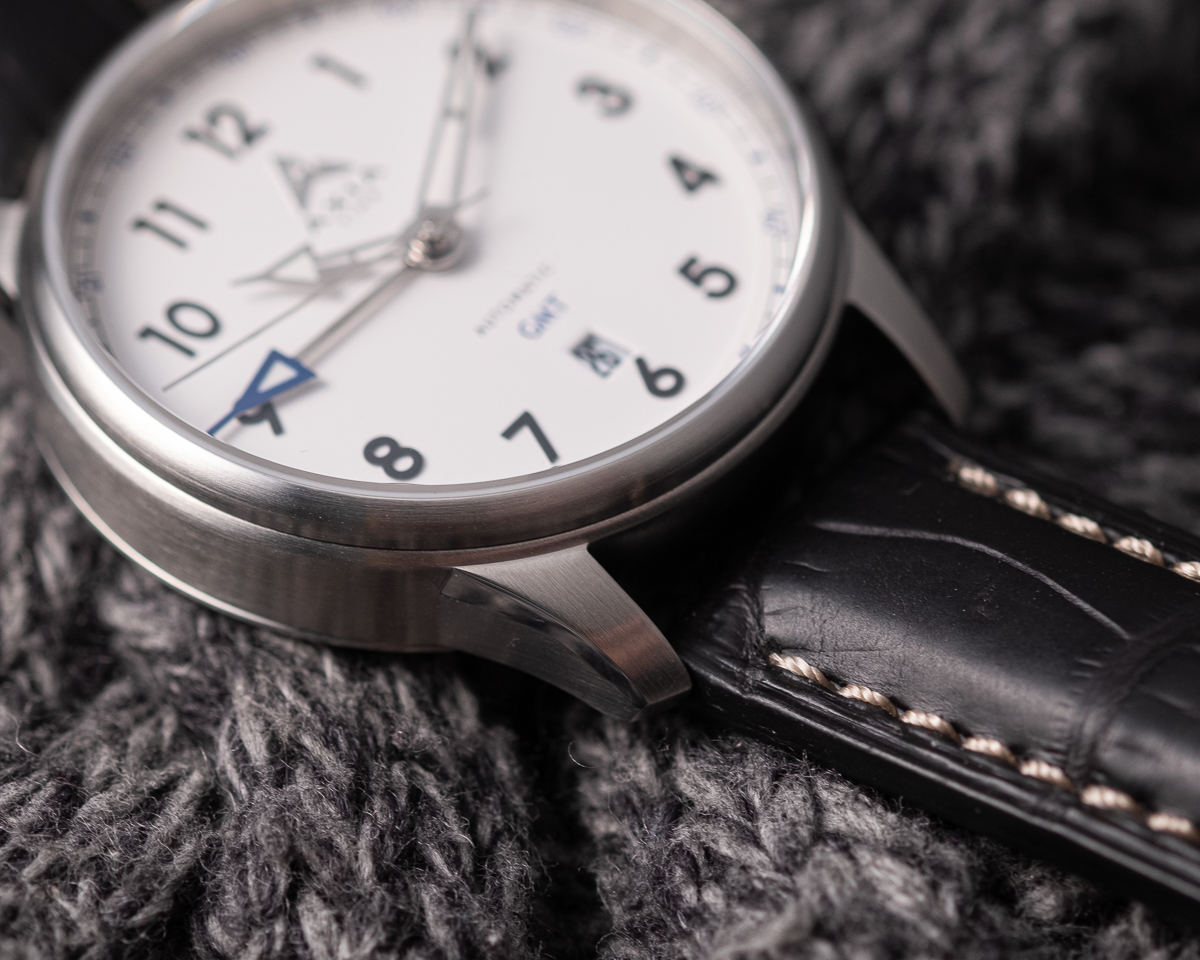 As I stated earlier, the Axia Kronos comes in a 40mm steel case that sits around 11mm-thick with a 49mm lug-to-lug. These are excellent dimensions for a daily-wearer and should sit on the wrist nicely and comfortably. I think, however, it’s fair to say that, apart from the polished bevels on the lugs, the case of the Kronos is somewhat unremarkable. Simple finishes and basic construction leave me “whelmed.” This isn’t necessarily a negative if the watch makes up for it in other areas. In the independent watch manufacturer world, it’s generally give and take. Unfortunately, I don’t feel like Axia gave anything back in this situation. 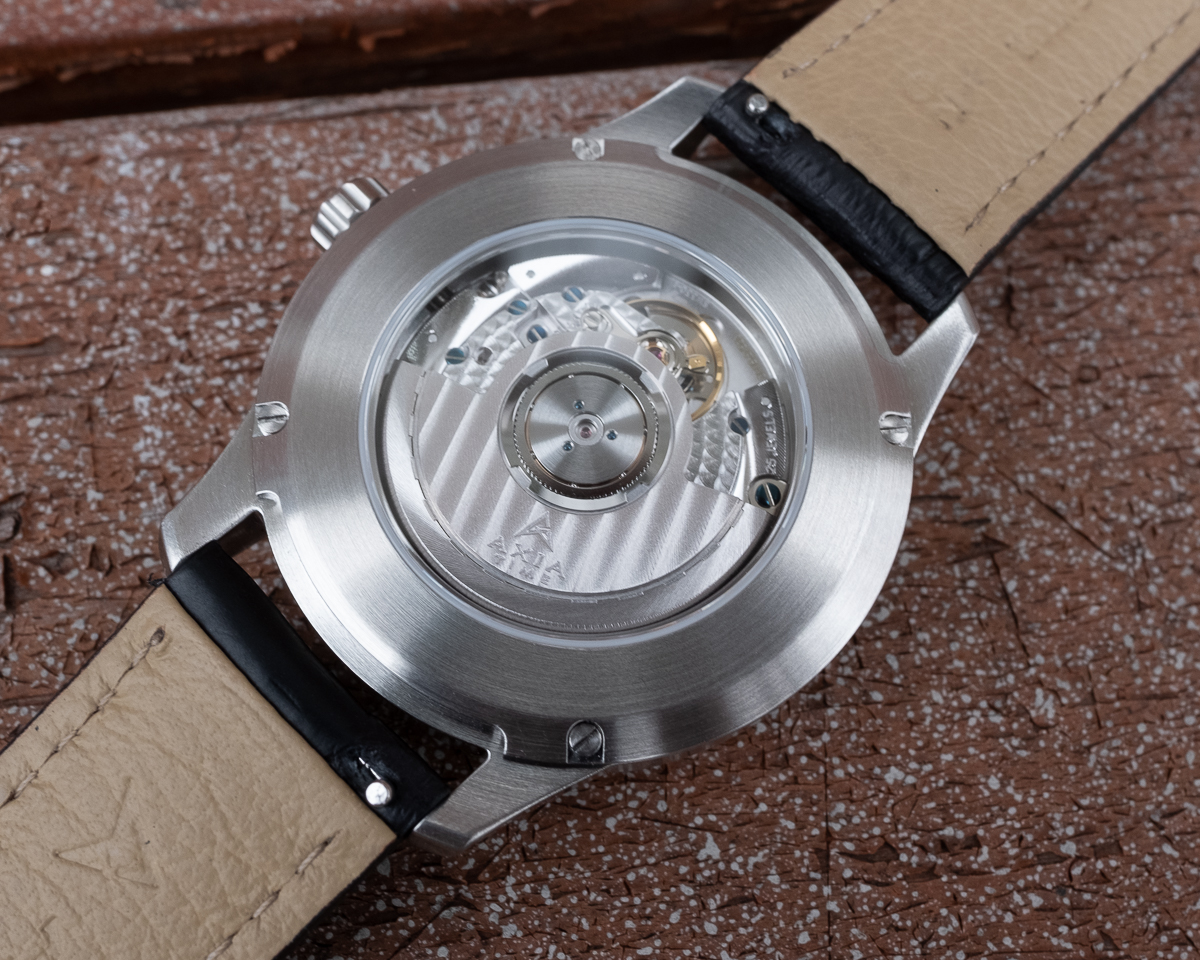 The display caseback is attached by four screws, only giving the watch 5 ATM of water resistance — something I’d personally want to be beefed up in an all-in-one travel watch. 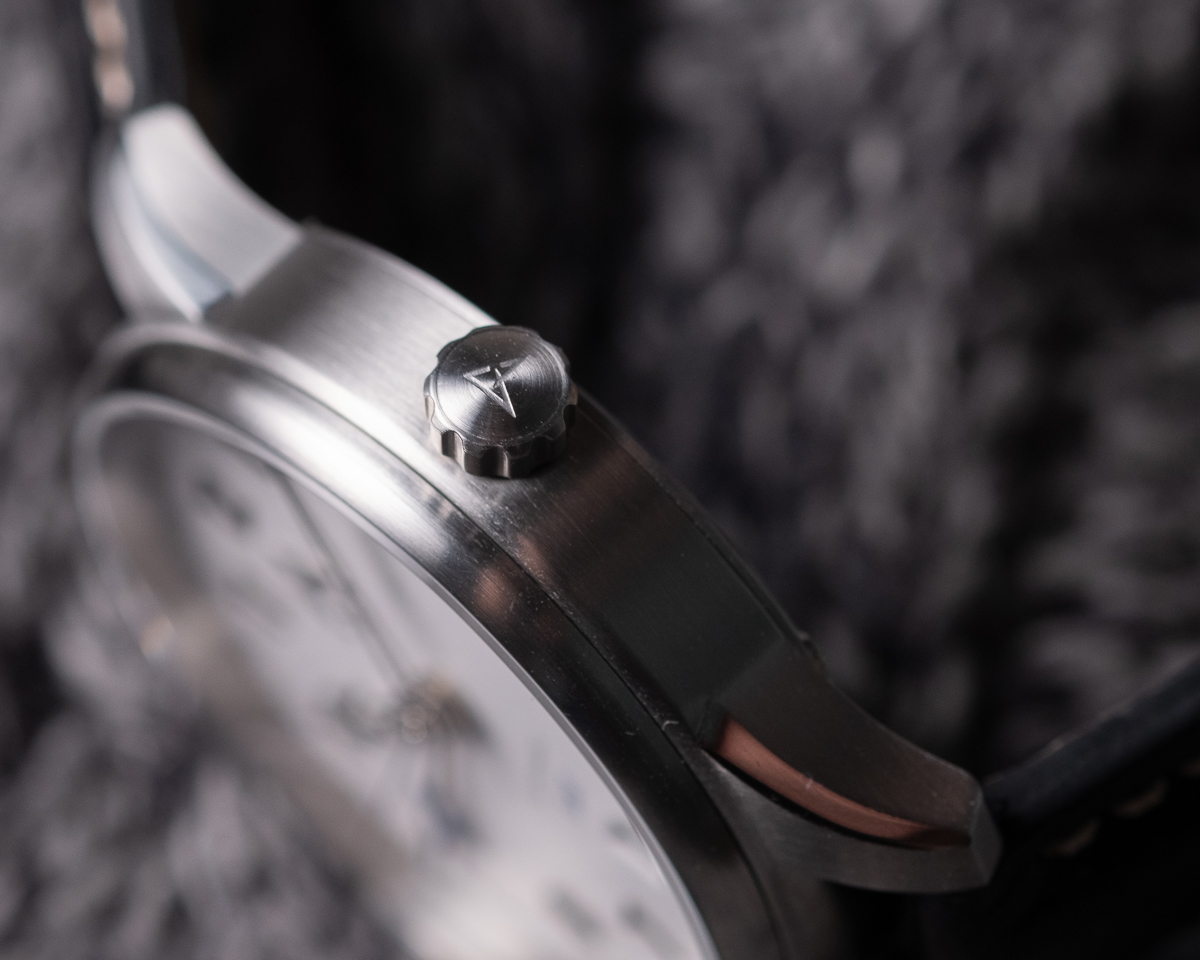 Axia opted for the Sellita SW330 GMT movement. This is a 28,800bph, 25-jewel movement that is visible through the display caseback on the Kronos. This seems like a pretty reasonable choice for a GMT at this level. As always, I would prefer to have a jumping local hour instead of a jumping GMT hand, but I get it.

The movement is visible through the display back. Axia has added some engine turning and Geneve stripes to the movement, giving a nice splash of refinement when you have the watch off your wrist to admire. 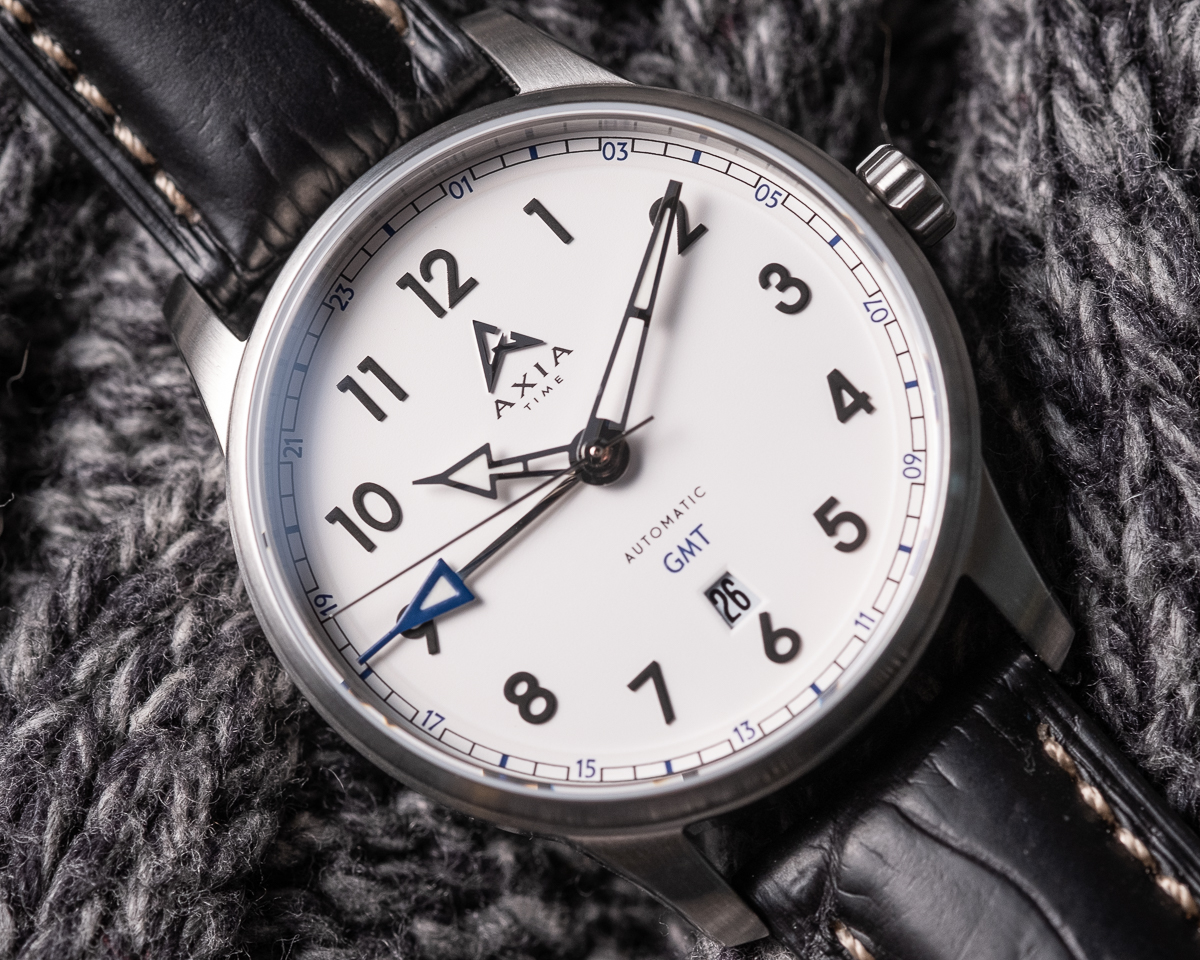 The business end of the Axia Kronos is conflicting to me. I think that the brand did a killer job with the applied numerals and logo. On the other hand, the lack of dial texture and a very minimal set of minute markers leave the dial feeling a little barren. I suppose that will come down to preference. Everyone is always harping on about clean design and symmetry, so this may fulfill that desire for you. 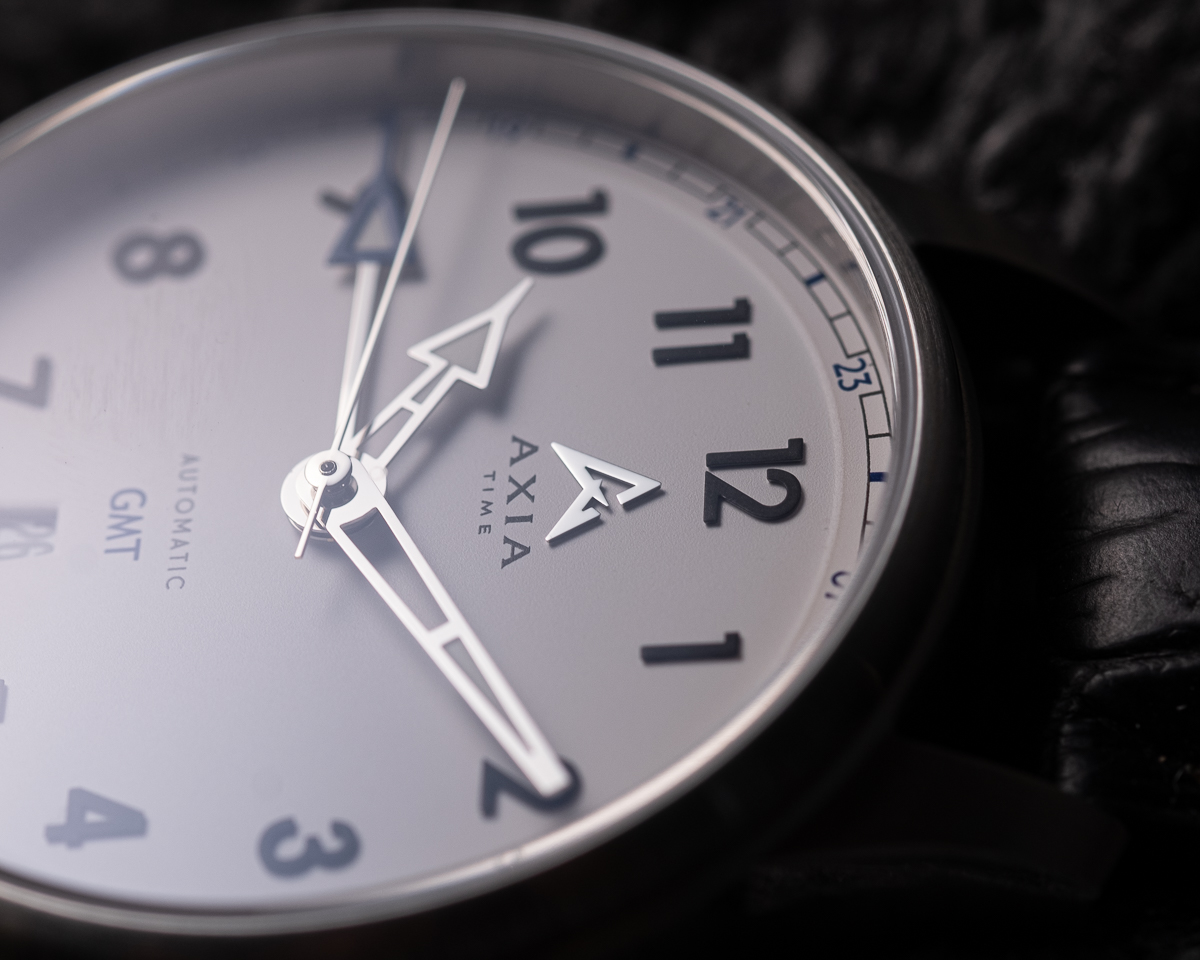 The hands are polished steel that is semi-skeletonized. The remaining half of the hands have nicely applied white lume. Speaking of lume, when charged up with a UV flashlight, it shines bright for a little while but fads quickly. Ideally, I’d love to have seen some lume on the dial. 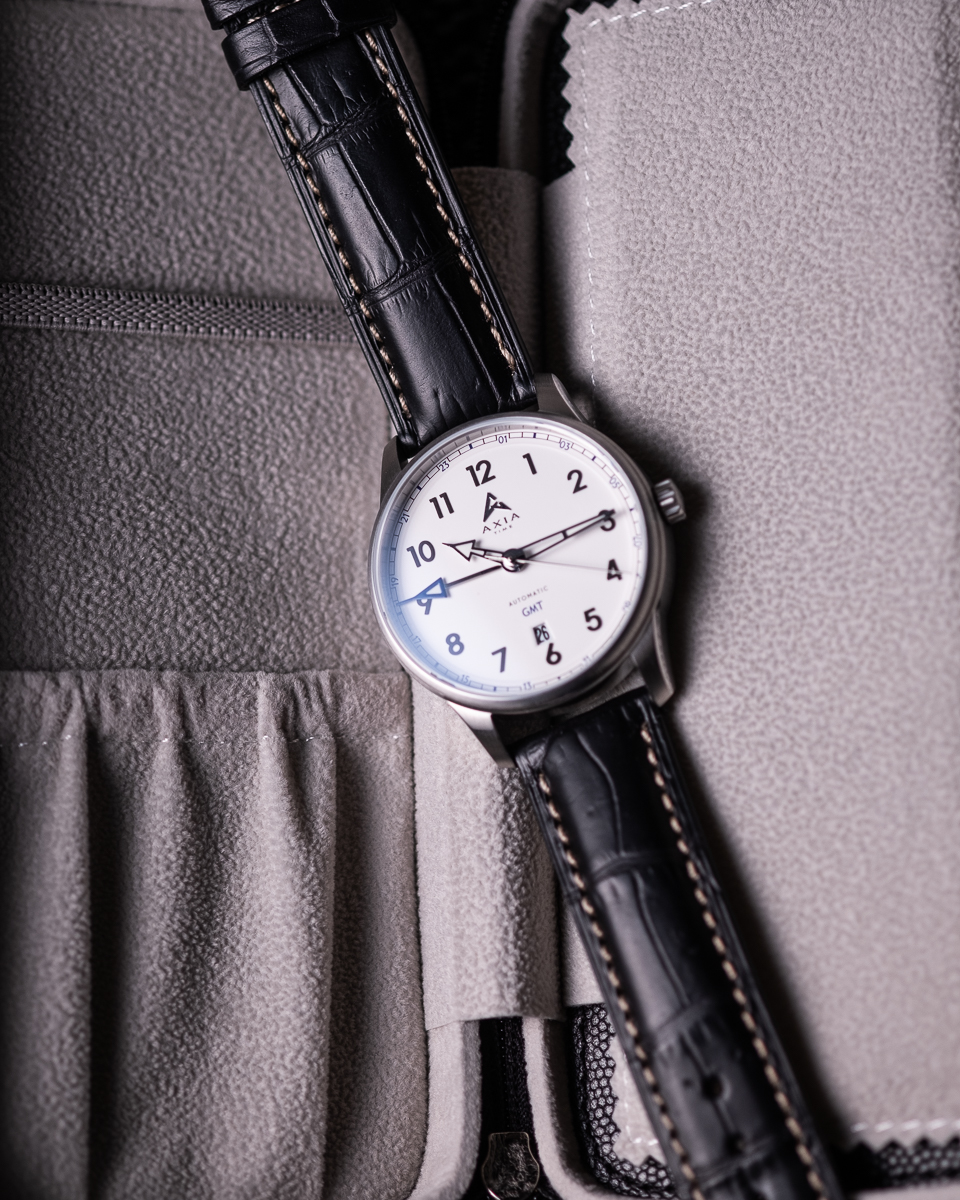 The Kronos ships on a handmade alligator strap that’s available in several color options. The version I received was the black strap. On the wrist, the strap is a bit stiff right out of the box, but I imagine with some time and use that it would break in nicely. Being that it’s both handmade and alligator, it’s a nice touch that really classes up the entire package. I do, however, think that the overall aesthetic of the Kronos might benefit from a simpler strap. 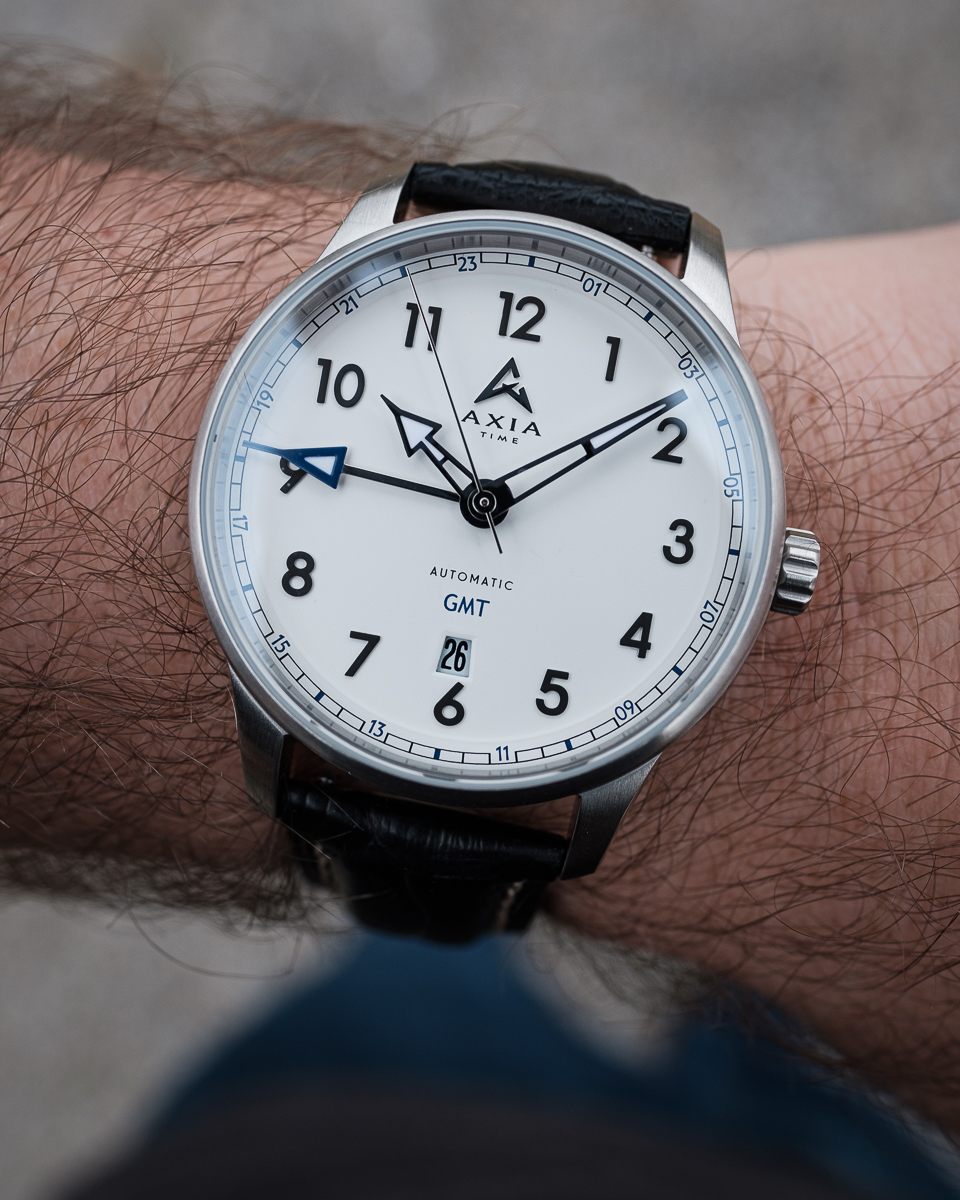 On the wrist, the Kronos sits nicely. It’s well proportioned with the 40 x 11x 48m size. It’s pretty much in the golden zone for wearability on my ~7in wrist, and Axia maintained a thin case, as well. If I had one gripe, it would have to do with the strap as mentioned above.

The sub-$1000 mechanical GMT market is a difficult one to compete in. A couple “near” the price of the Kronos jump to mind but none cheaper.

The first that popped into my head is the Farer GMT Collection (my favorite is the Lander II). These weigh in around $1,400 and boast a really quirky colorway and nicely designed retro-inspired dials. They are powered by the proven ETA 2893-2 that has been beautifully decorated. I think you get a lot for your money here, but it is $500 more than the Axia.

Next would be a Nodus Duality with the 12-hr bezel. While not a true GMT, it does offer the functionality of tracking a second-time zone if you can keep AM/PM in mind. Powered by a Miyota 9015 and featuring an internal rotating bezel, these watches offer a ton. They are also priced a couple hundred dollars less than the Kronos at $700. I also personally feel that the design language used on the Nodus watches is a little stronger than Axia’s, but that will be a personal determination.

Lastly, I want to point out a third option from Christopher Ward. Christopher Ward released its C65 Trident GMT early in 2019. It’s also powered by a Sellita SW330 and showcases the brand’s leanings toward some really classic styling. You’ve also got a slim Pepsi bezel that no one can turn down, it seems. The C65 Trident GMT runs just over $1,000 and, in my opinion, is the best option of the bunch. 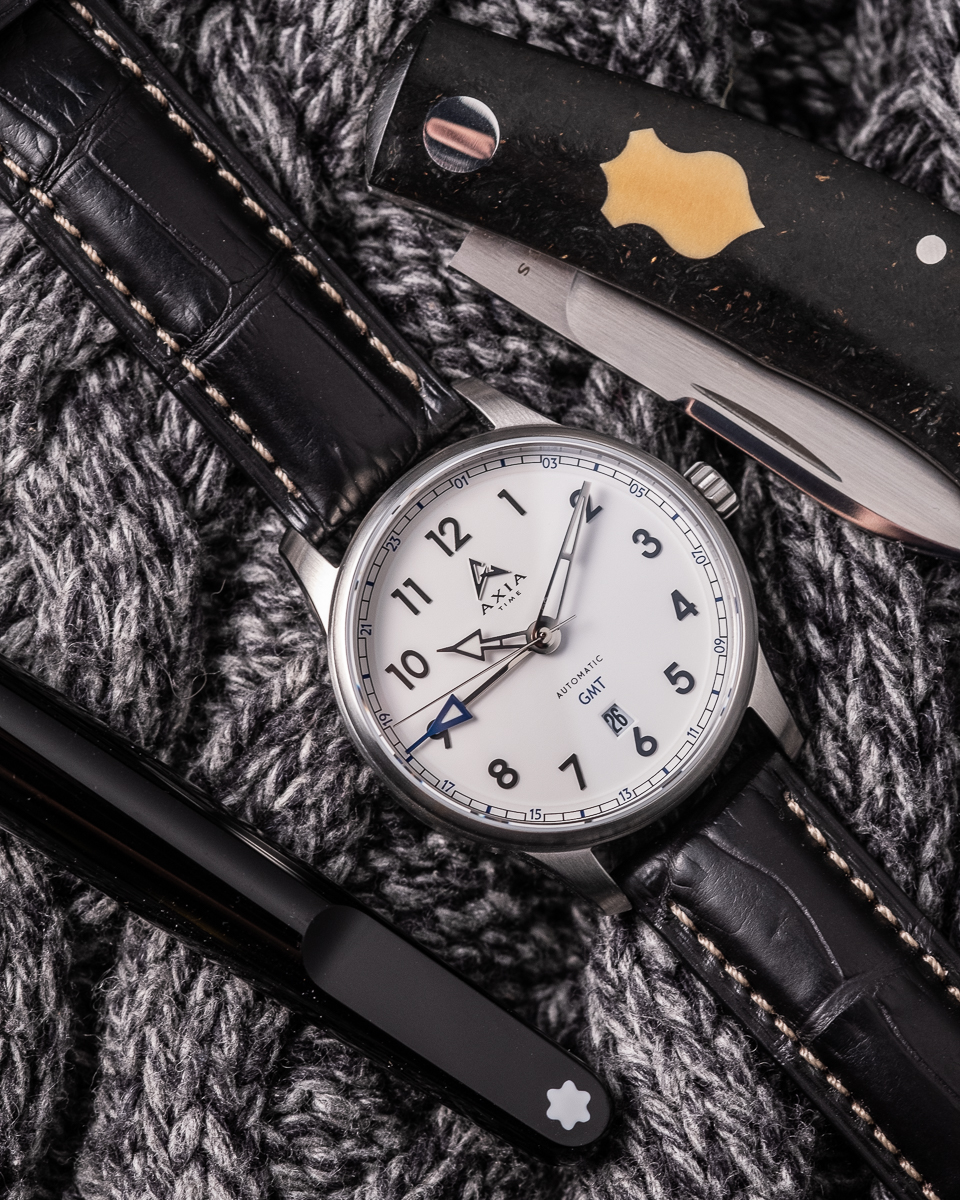 To summarize, it’s fair to say that Axia makes a noble effort with the Kronos collection. I’m not sure it is entirely successful, but it shows the marks of a company that cares and is trying to figure it out. Do I think the Kronos has some potential fans? Yes. It occupies such a classically designed watch trope that someone looking for something different, somewhat inexpensive, and with a GMT might opt for this over some of the above options.

Individual taste is what keeps the watch world fresh and exciting. I also think it’s fair to say, as I did in my introduction, that this particular area of the independent-watch-brand-community must be challenging to stand out in. You’re up against some killer competitors, and it will come down to what you can offer that others don’t, or it will come down to value. I’m not sure Axia really nails either with this collection. I will, however, keep an interested eye on what the brand does in the future.

The Axia Kronos is currently available in a white-dialed configuration, but the website text alludes to more in the future. It’s offered on black, brown, or camel-colored alligator straps. And it will be limited to 500 pieces per dial color. It’s being sold for $895 USD. For more information and to check availability, head on over to axiatime.com.

Necessary Data
>Brand: Axia
>Model: Kronos
>Price: $895
>Size: 40mm
>Would reviewer personally wear it: Probably not.
>Friend we’d recommend it to first: I think this watch would make a good gift for someone who just wants a watch to wear daily, but isn’t likely to “get into watches.”
>Best characteristic of watch: The applied markers and logo on the dial are very nice.
>Worst characteristic of watch: The general blandness of the design, in general, is tough to get past.