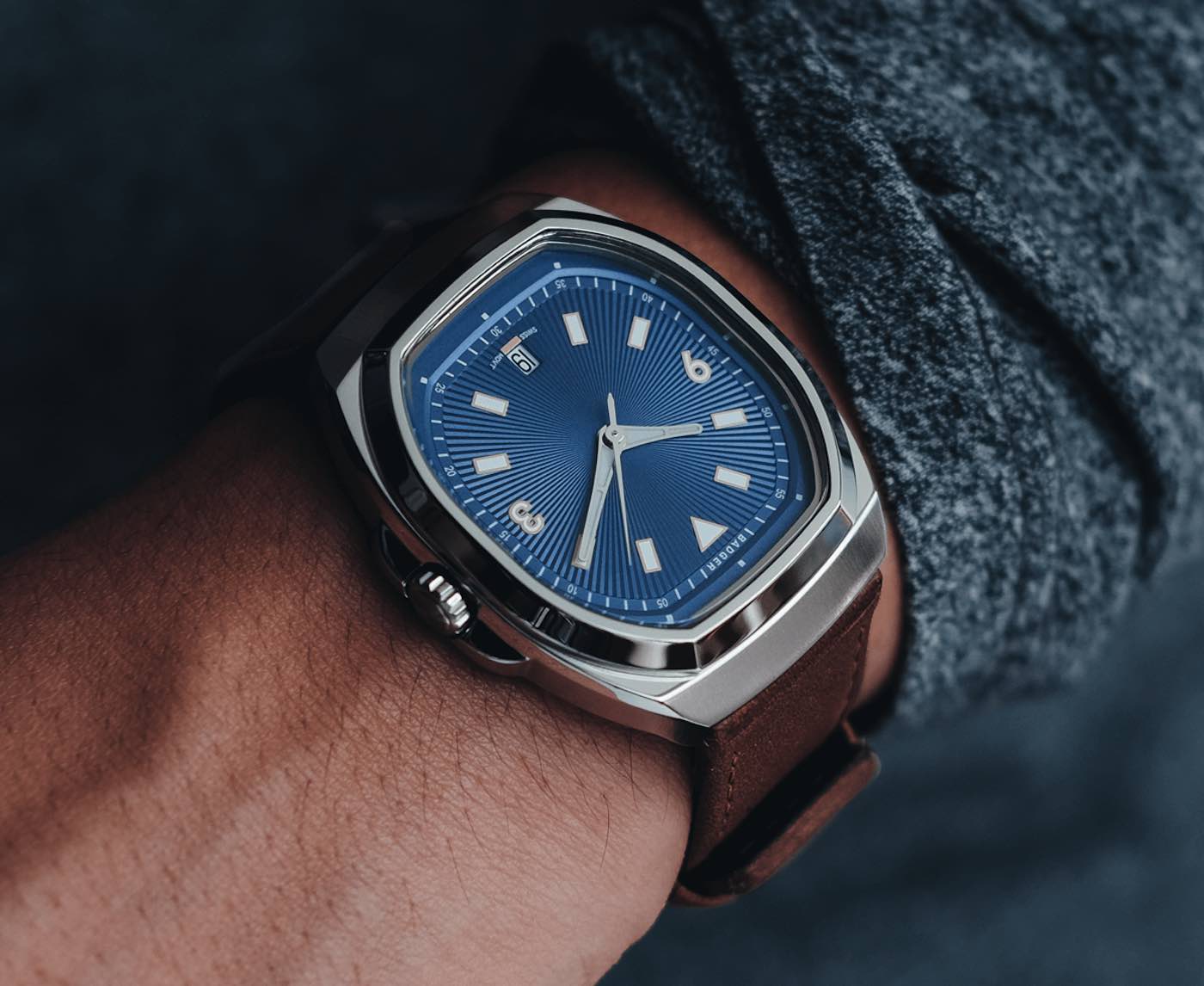 Having already eclipsed its initial target within 24-hours, Badger Watches‘ debut piece, the Islander Automatic, is still pushing hard toward the finish line of its Kickstarter campaign. Based in Singapore, Badger watches (occasionally stylized at BDGR on certain watch elements, such as the crown) has named its debut piece in honor of Singapore’s status as a tropical island nation. Its inaugural timepiece steps away from the purely formal design, choosing instead to pitch itself as a business-casual piece. A refined blend of utilitarian elegance, the unusual tonneau-shaped watch stands out for all the right reasons on the wrist. 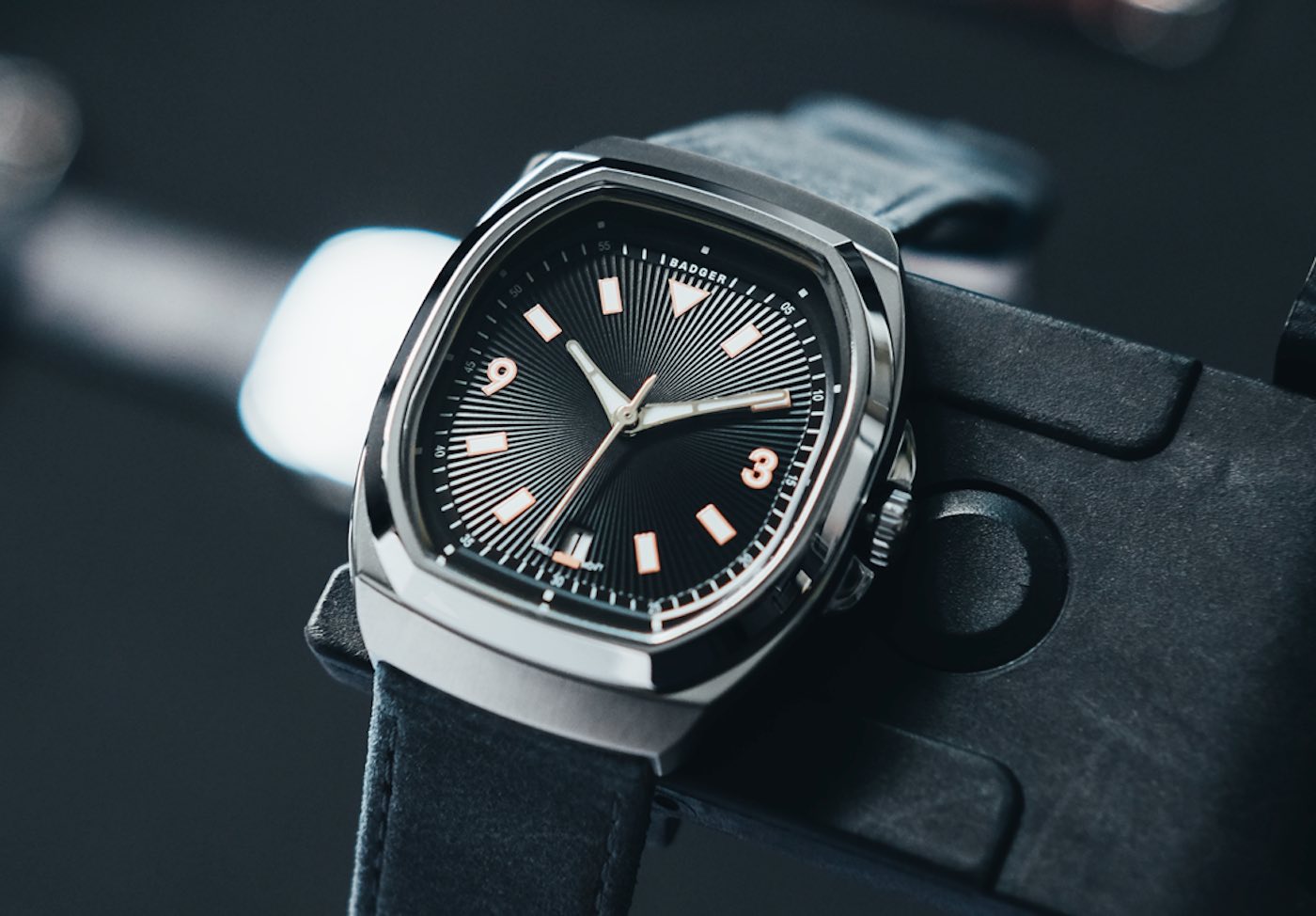 The tonneau case is born of Badger’s desire to stand out from the slew of microbrands launching on Kickstarter. The sparse dial emphasizes texture and lighting rather than overcrowding the visage with too much dial furniture. The numbers, arranged in a circle, add another dimension to the design. By building a design that is composed of shapes within shapes, the Badger Watches Islander Automatic presents a complex, engaging face to the world. 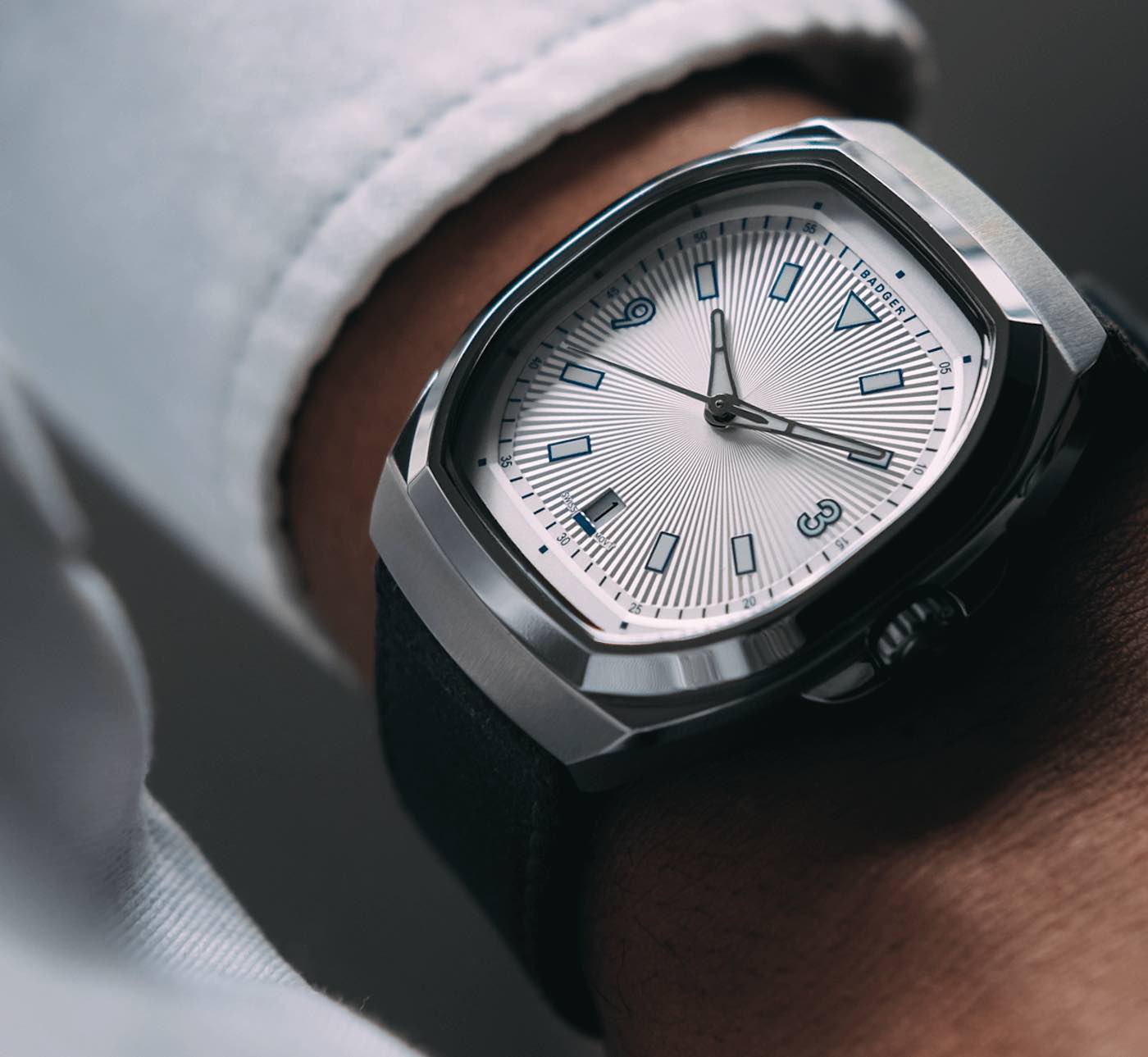 In addition to the tonneau case being an unusual choice for a new microbrand, the way it is constructed is also something quite uncommon. This tonneau case, despite its simple and immediately digestible appearance, actually comprises three components — a bezel, a case middle, and a caseback, which is held in place by eight screws. The brand has chosen a more complex case construction to improve the wearability of the watch. While the Islander Automatic is not a particularly large timepiece, coming in at an elegant 38mm × 11mm × 48mm long, tonneau cases can often wear quite flat on the wrist. Badger decided, instead, to curve each of the three case components so the watch hugs the wrist, reducing its visual presence. 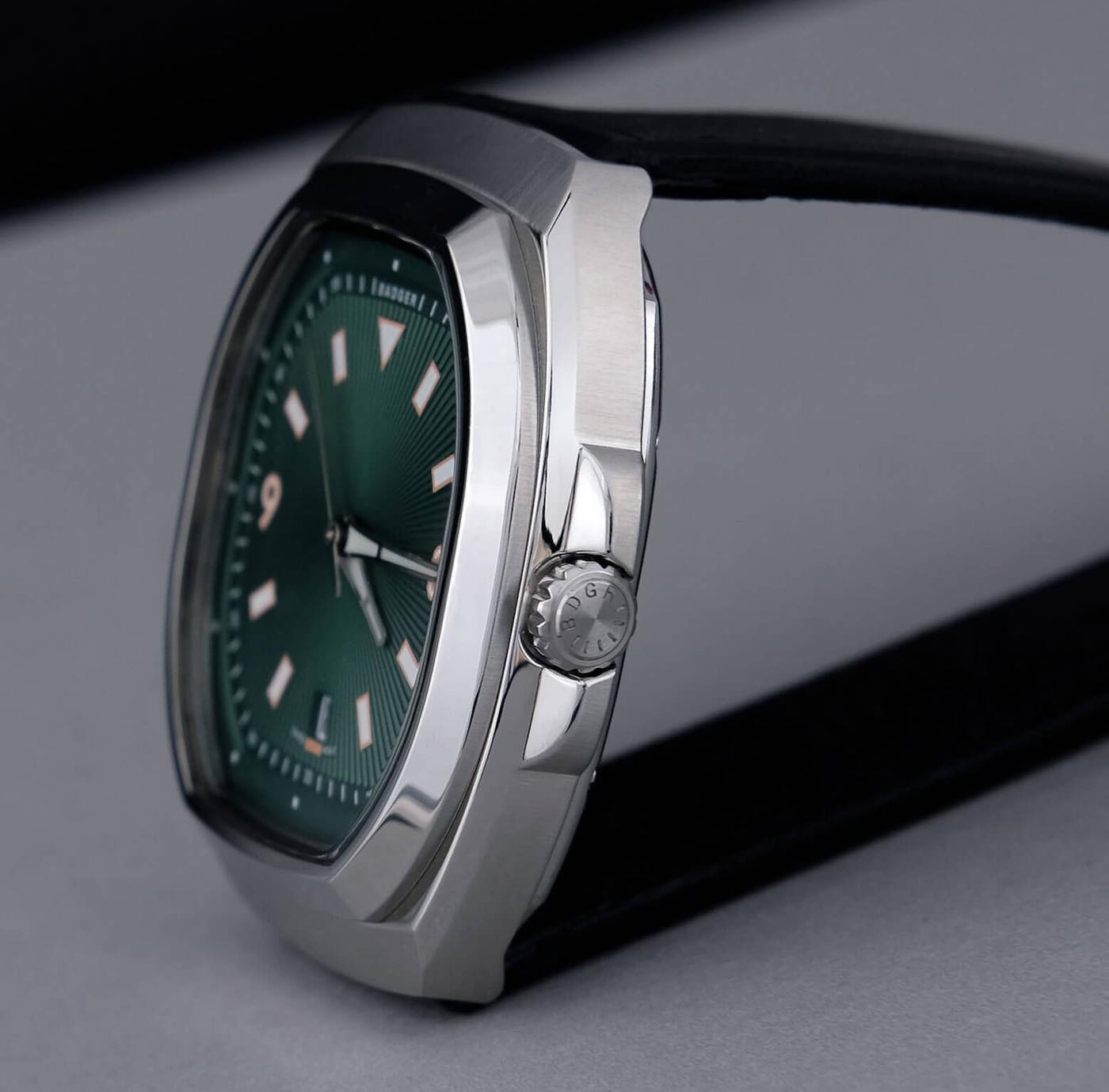 Despite those relatively svelte proportions, there is space inside the Badger Watches Islander Automatic for a Sellita SW200-1 movement, which is a reliable workhorse caliber capable of excellent accuracy. And despite the non-standard case, tight manufacturing tolerances have been able to ensure water resistance guaranteed to 50 meters. 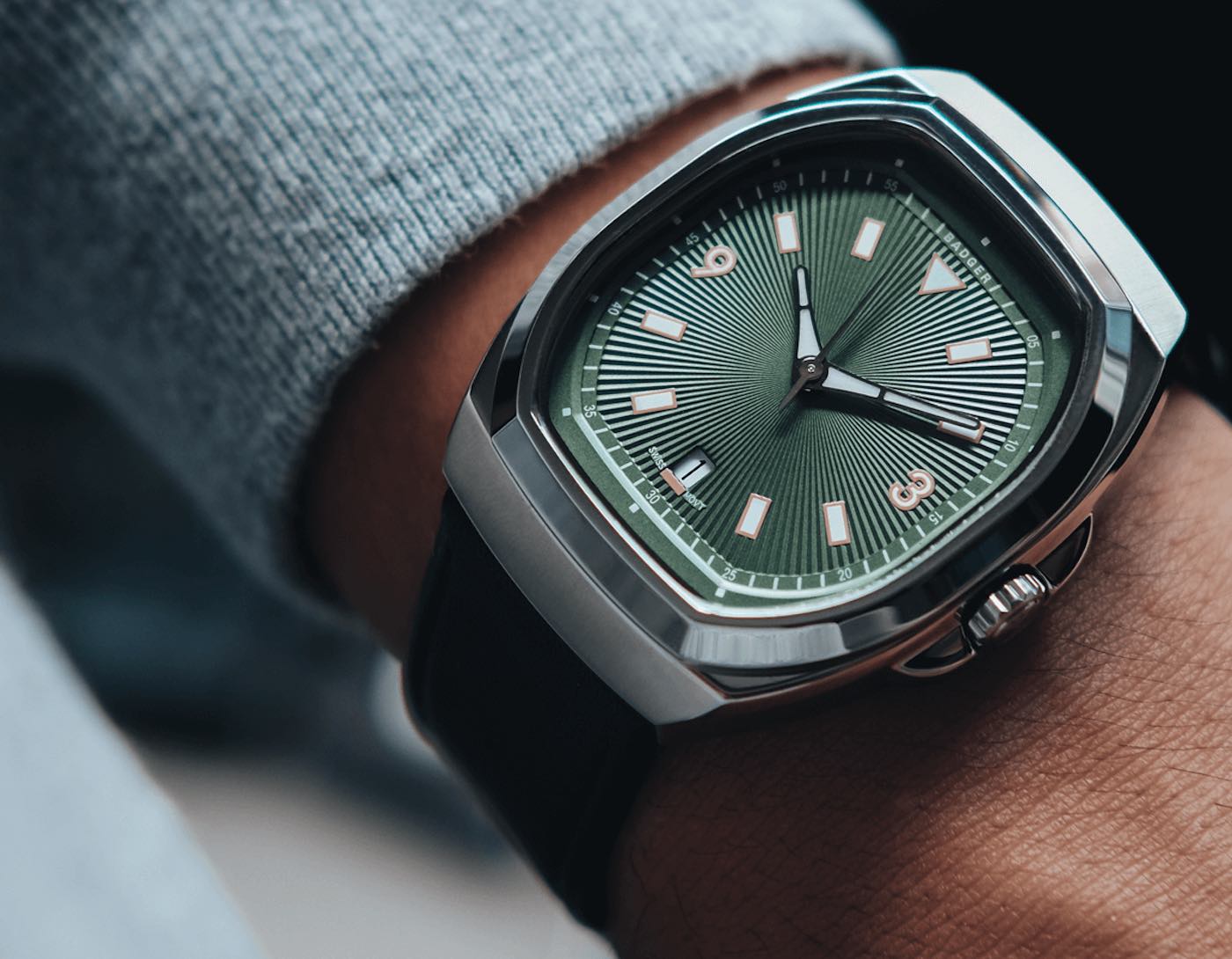 A date window at 6 o’clock retains the symmetry of the pared-back dial, and the wordmark has been relocated from the more traditional position between 12 o’clock and the center, to sit in line with the minute track above the 12 o’clock marker itself. Those indexes have been treated with BGW9 Super-LumiNova, as has the refreshingly original handset. 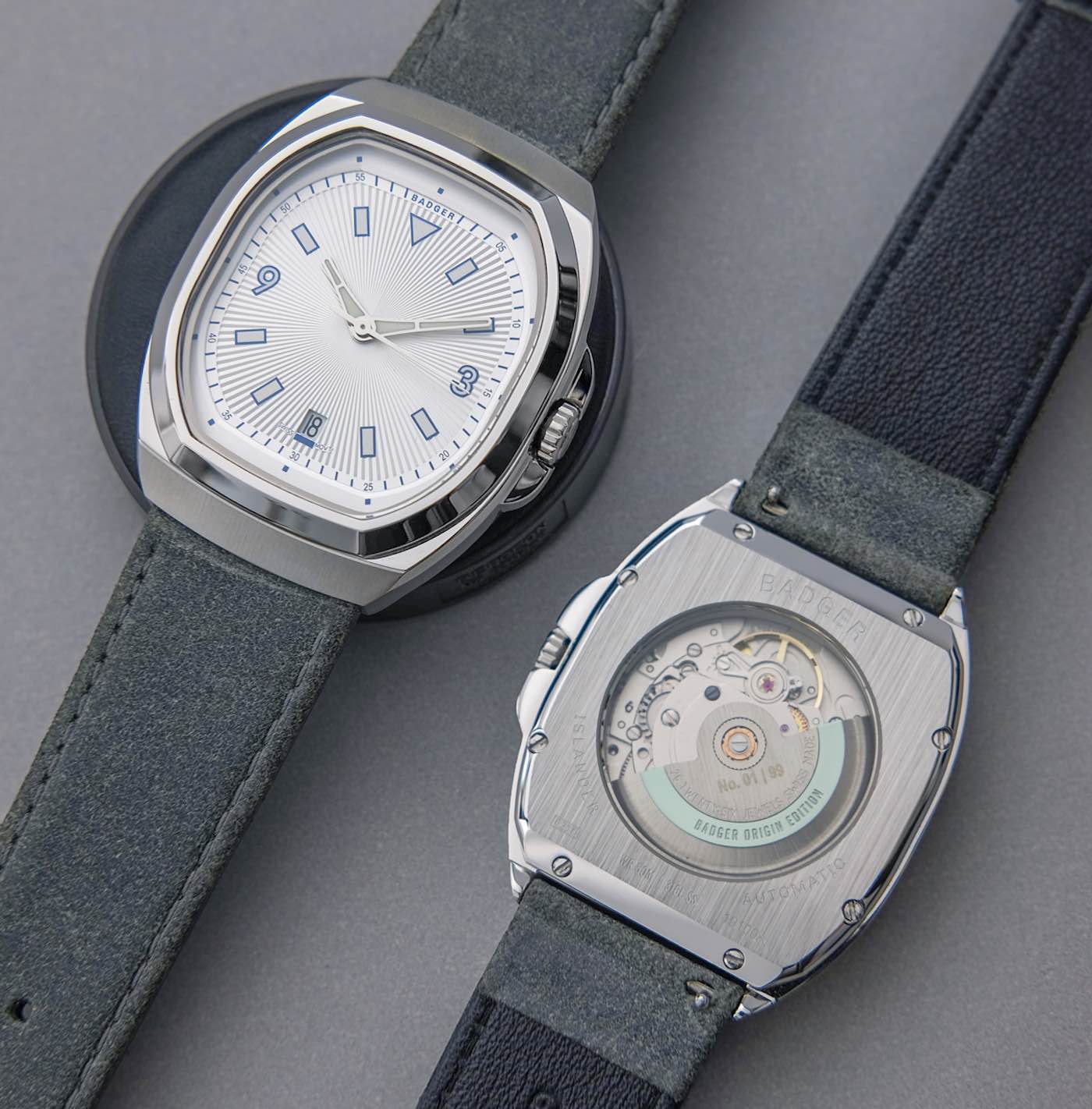 The four colors available are Onyx Black, Azure Blue, Sage Green, and the “Origin Edition” with a satin silver dial, limited to 99 pieces (along with a custom rotor weight decoration). Strap choices range from smooth Italian calf leather to a lush, textured suede. The Badger Watches Islander Automatic is currently priced at $420 during the Kickstarter campaign, which will conclude on October 17th. Following the campaign, the full retail price is projected to start at $700. To learn more about the brand and to follow the ongoing campaign, please visit badgerwatches.com.