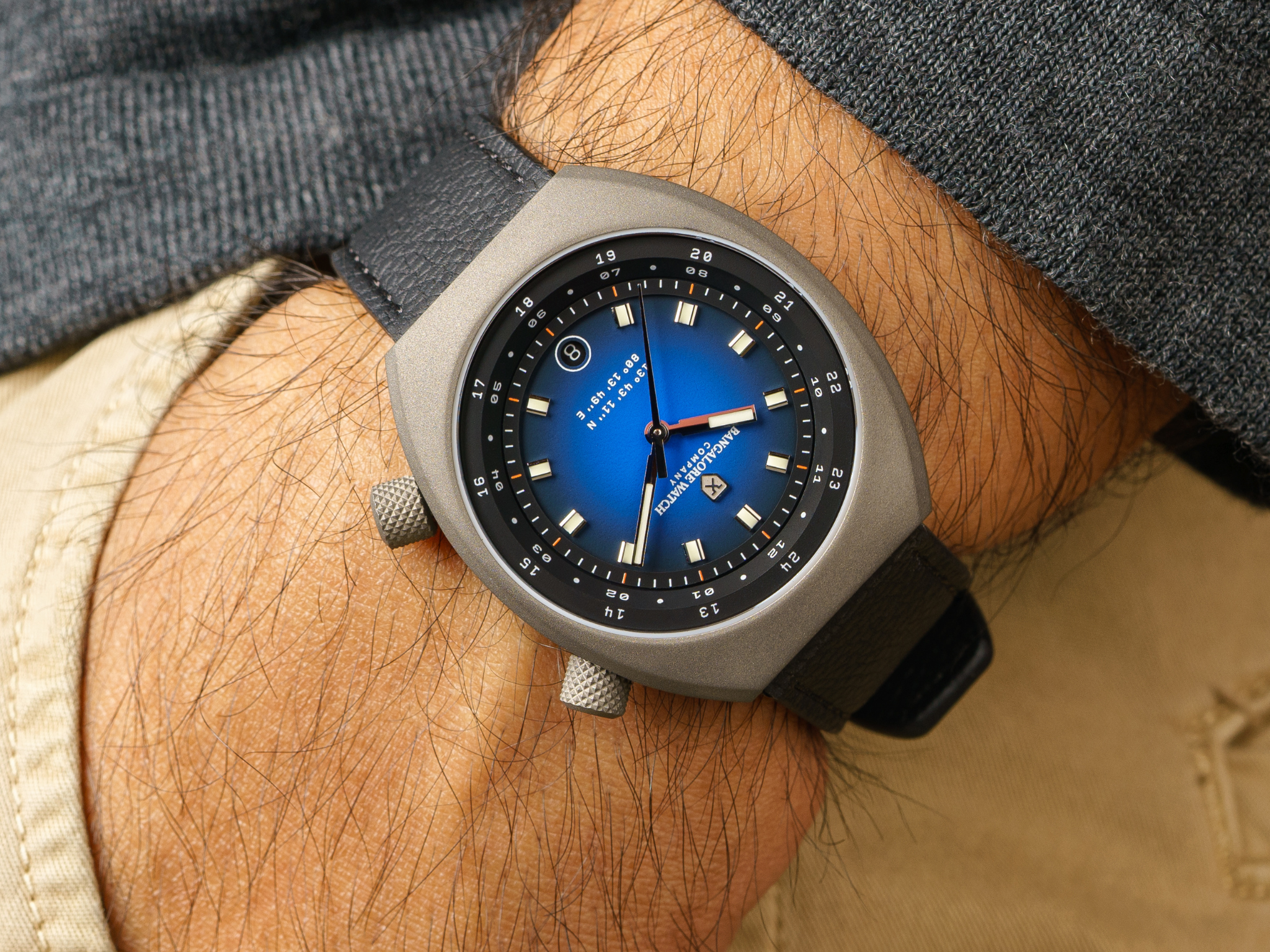 22 Comments
by SponsoredPost
Sponsored post presented on aBlogtoWatch for advertiser

In the late 1960s, a motley crew of scientists turned an old church in a fishing village off the west coast of India into a ground-control station, and started firing sounding rockets. Flash-forward 50 years and India is now part of only a handful of space-faring nations around the world. In the past decade alone, the Indian Space Research Organization (ISRO) has sent rockets to Mars, missions to the Moon, and inserted a record 104 satellites into orbit in a single launch. 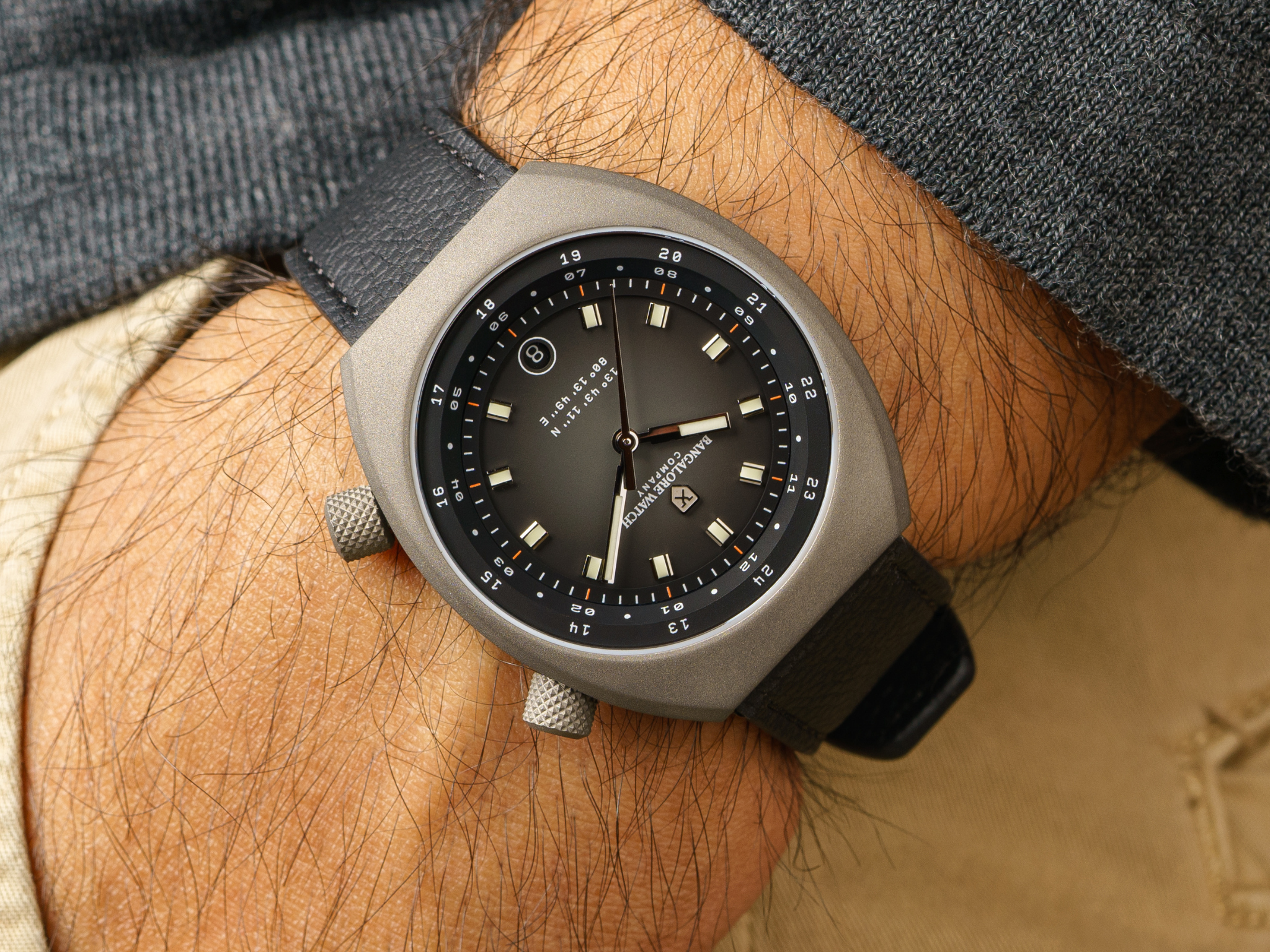 Bangalore Watch Company tells inspiring stories about India from a 21st-century point of view, one of which is the story of the work of the ISRO. After debuting in 2018 with a dress watch collection inspired by mid-century watchmakers from India, a pilot watch inspired by the Indian Air Force, and then an urban-sports watch inspired by the sport of Cricket, the brand is back with a new collection. Apogee is a series of sporty, futuristic watches that celebrate five decades of the Indian space program, all priced under $1,000 USD.

The Apogee case is made of Grade 2 titanium in a construction format the brand calls “Unibody,” which has just two distinct pieces — the case and the caseback, the latter of which is screwed on, which allows weight to be shaved off the bezel. Both the case and crown are treated with a micro-bead-blasted finishing that gives the watch a dark, futuristic appearance. 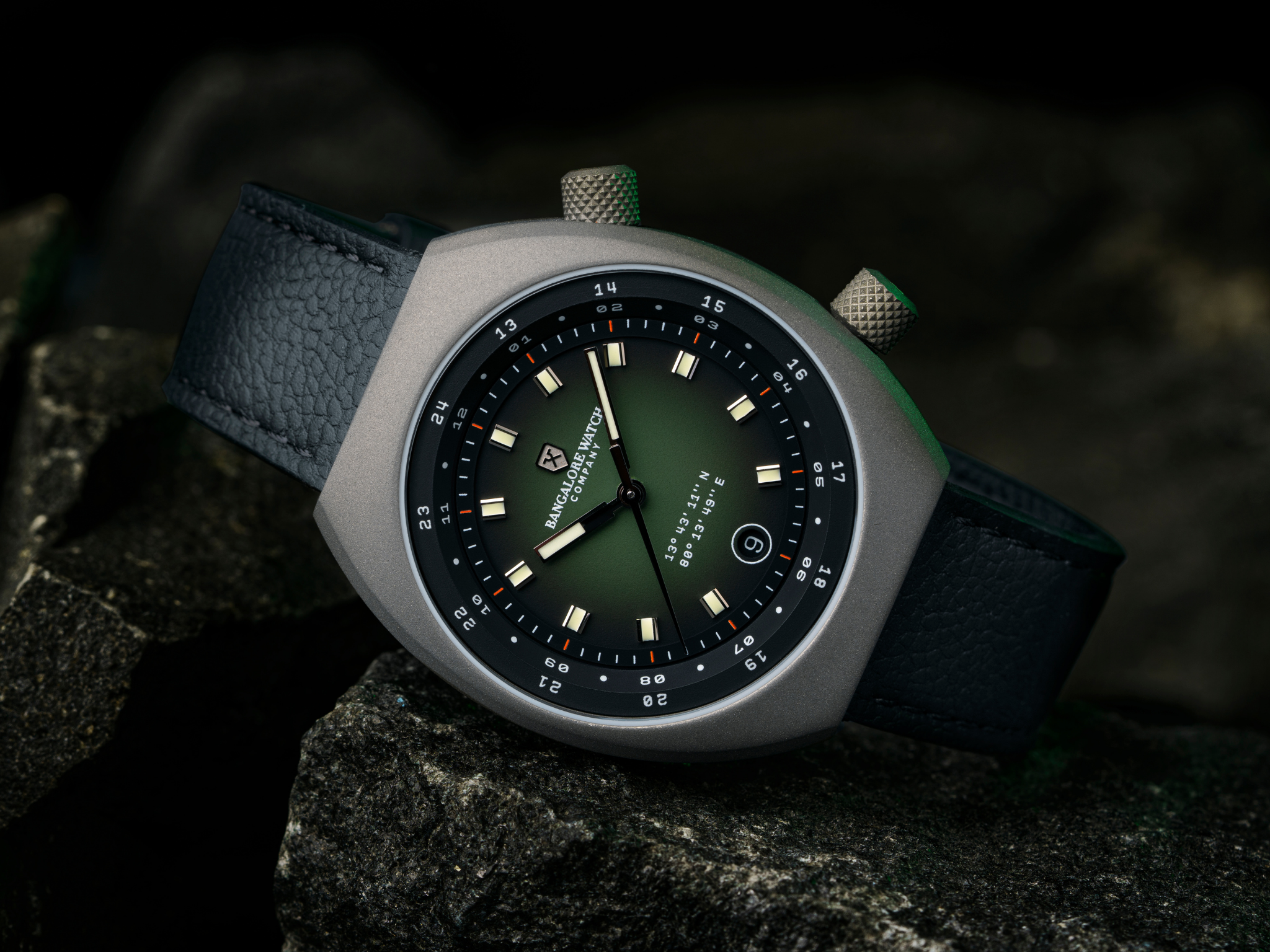 ISRO was formed in the late 1960s and early 1970s, so Bangalore Watch Company has taken inspiration from this era of watchmaking history. The Apogee case is a cushion/tonneau shape, while the hands and applied indices are diamond-cut and rhodium-plated for excellent lightplay. Crevices become the perfect surface for Swiss C3 Grade A Super-LumiNova. 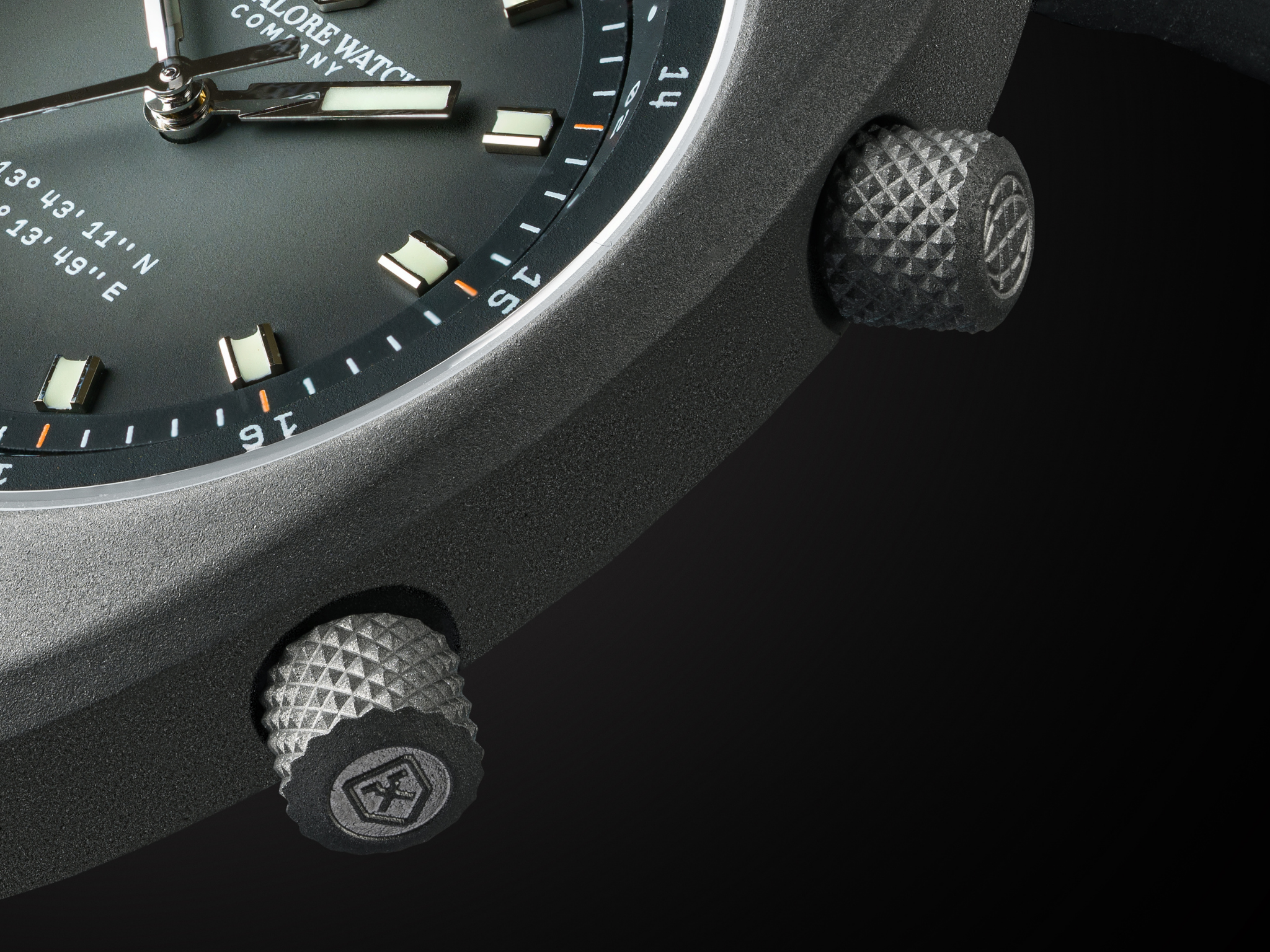 The dials have a fumé effect, with dark colors that evoke and support the space theme. The brand uses an applied logo slightly below the 12 o’clock marker, and a date window is neatly tucked at the 6 o’clock position, maintaining full symmetry on the dial. Slightly above the date window is a lat-long position that references Sriharikota, a barrier island off the east coast of India and ISRO’s current launch site for all satellite launch vehicles. Also notable is an internal bi-directional rotating bezel operated by a screw-down crown at 2 o’clock. This can be used as a second time-zone bezel, evoking the need to track a local time (or Zulu time) and a mission control time for space-themed watches. 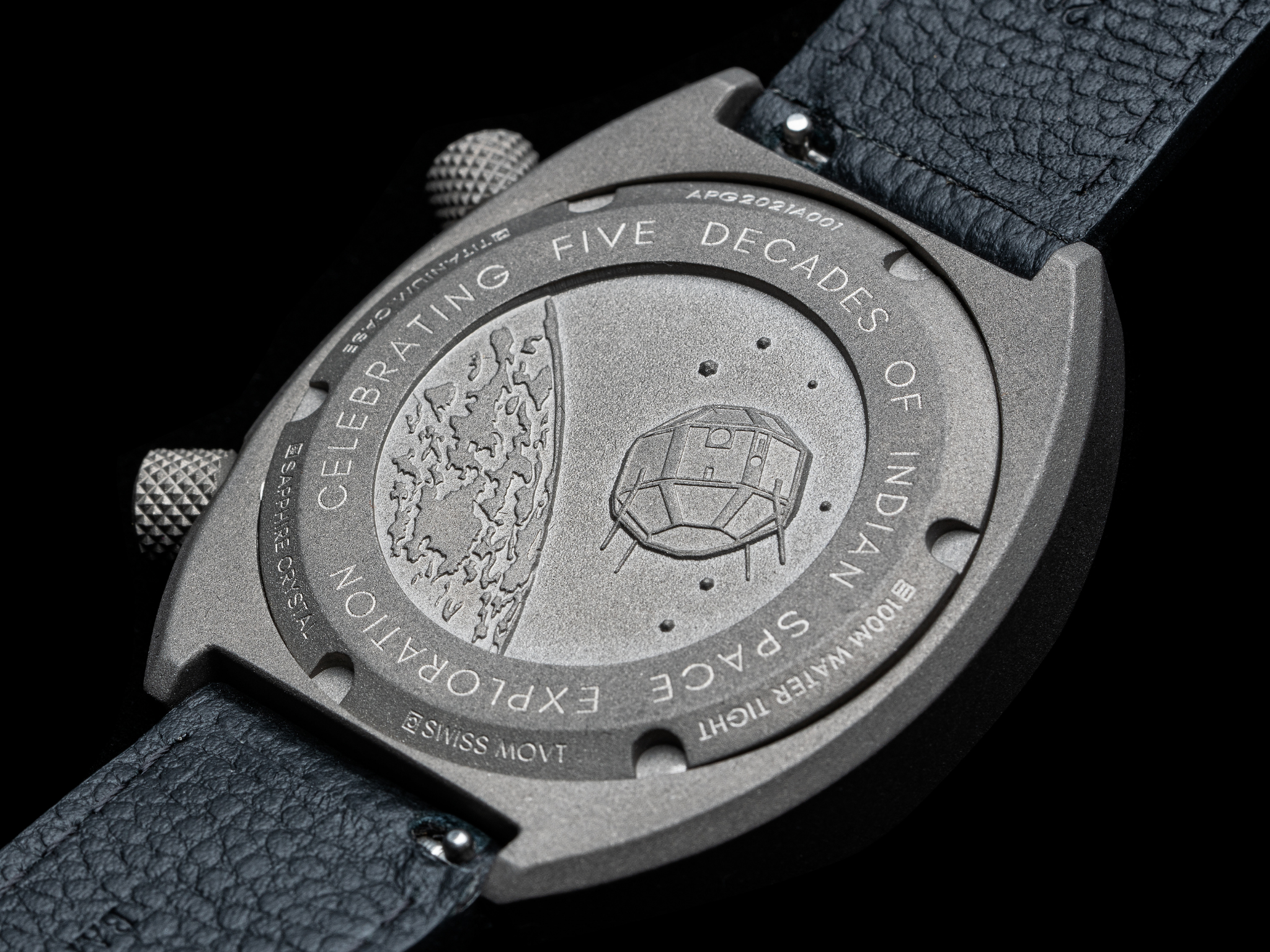 Bangalore likes to use casebacks as a canvas to extend the backstory of its watches. Here, too, the casebacks have a 3D-embossed artwork of a satellite orbiting the Earth, with celebratory text outlining the story of the watch. This image is of Aryabhatta, India’s first indigenous satellite launched in 1975.

All Apogee watches come with a black leather strap with a Clemence pattern, accompanied by titanium buckles that also receive the same micro-bead-blasted finishing as the case and crowns.

The Bangalore Watch Company Apogee is 40mm-wide and 11mm-tall with a 44mm lug-to-lug distance; it also has 100 meters of water resistance,  a sapphire crystal with AR coating, a push-and-pull crown for time/date adjustment at 4 o’clock, and a screw-down crown. The movement inside is a Swiss Sellita SW200 standard grade movement with 38 hours of power reserve. 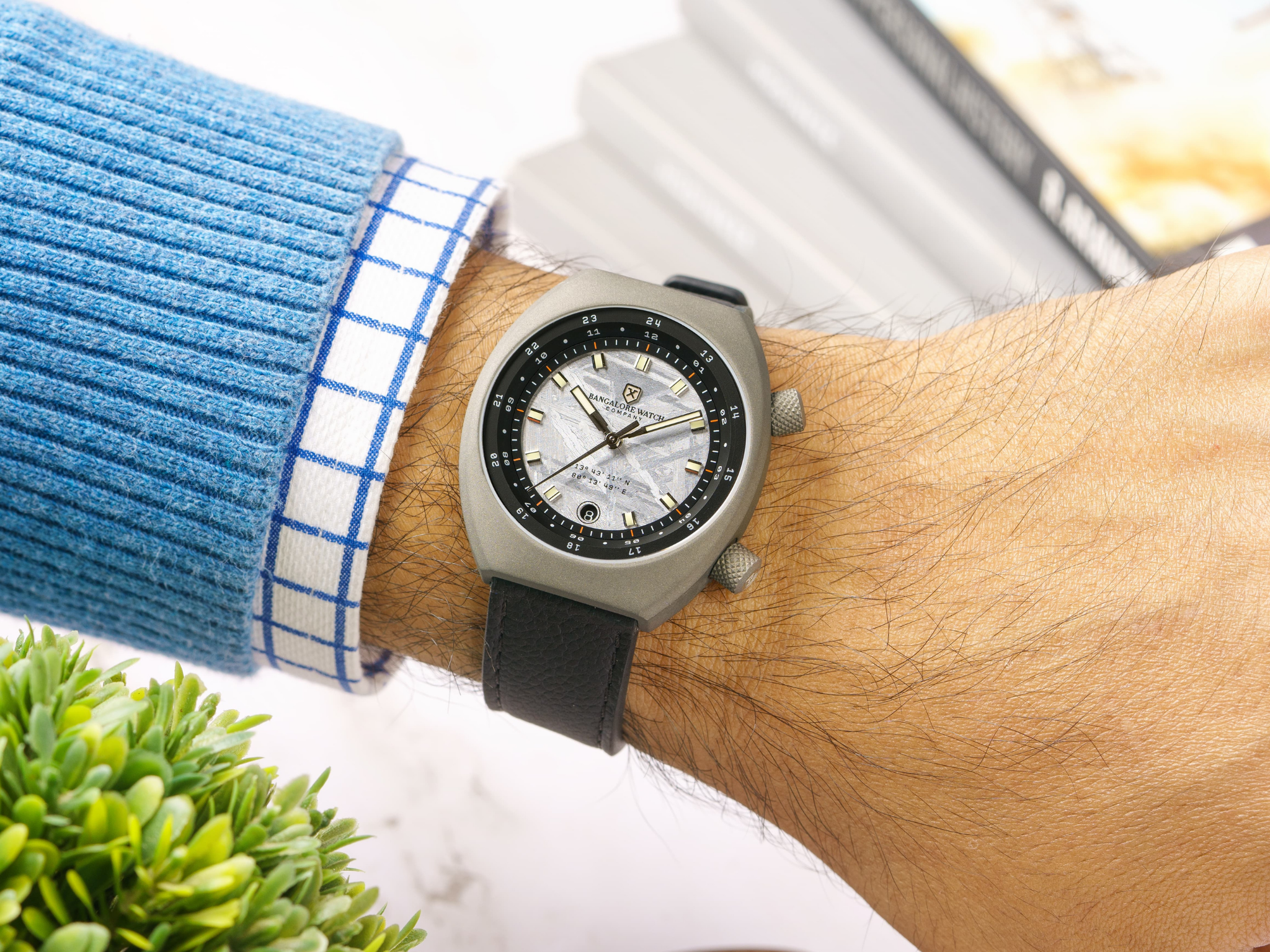