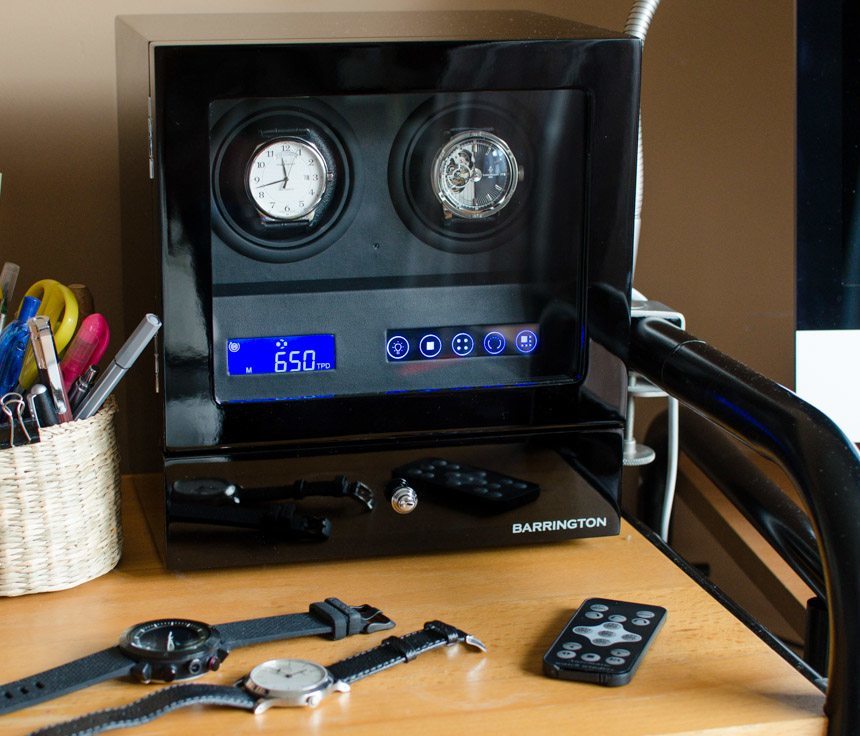 There are a number of solid reasons why I have not considered getting a watch winder before. In no particular order, these included price, reliability, build quality, functionality and value. There are some cheap and (not-so) cheerful eBay solutions – with infamous reliability issues – while at the other end of the spectrum, one has the several hundred to several thousand dollar segment – an amount many would rather spend on watches themselves. And yet, despite all that, I was looking forward to giving the Barrington Single Watch Winder and Double Watch Winder a shot, as they promised to get right most basic requirements. As we will see, while they are not without their minor faults, they do offer a highly recommendable option for those looking for a decorative and useful new winder in the value-segment.

Barrington Watch Winders is a British company that – unlike some others who make safes and sometimes even watches – is involved only in selling watch winders. Their selection at the time of this review goes from single through double winders, all the way up to larger containers, with 4, 6 or 12 spinning watch holders. In our review, we will be looking at the most popular, single and double winders, so let’s begin with the more compact of the two.

The single watch winder is available in seven different colors, including the obligatory black and white options, as well as green, blue, red, orange, and yellow. I received the green one and found that, while it worked beautifully with the wood surfaces and the primarily grey and beige colors of my office’s interior, I will say that keeping the glossy green cover of the winder clean from dust and finger prints proved to be quite challenging. The fact of the matter is, however, that this lovely little box received such a prominent space next to my desk that I felt obliged to try and keep it clean. 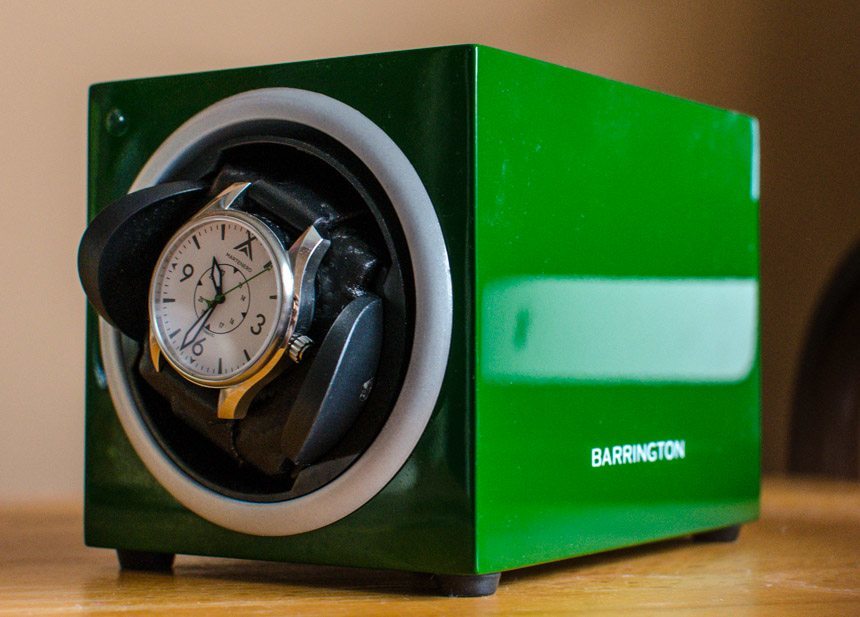 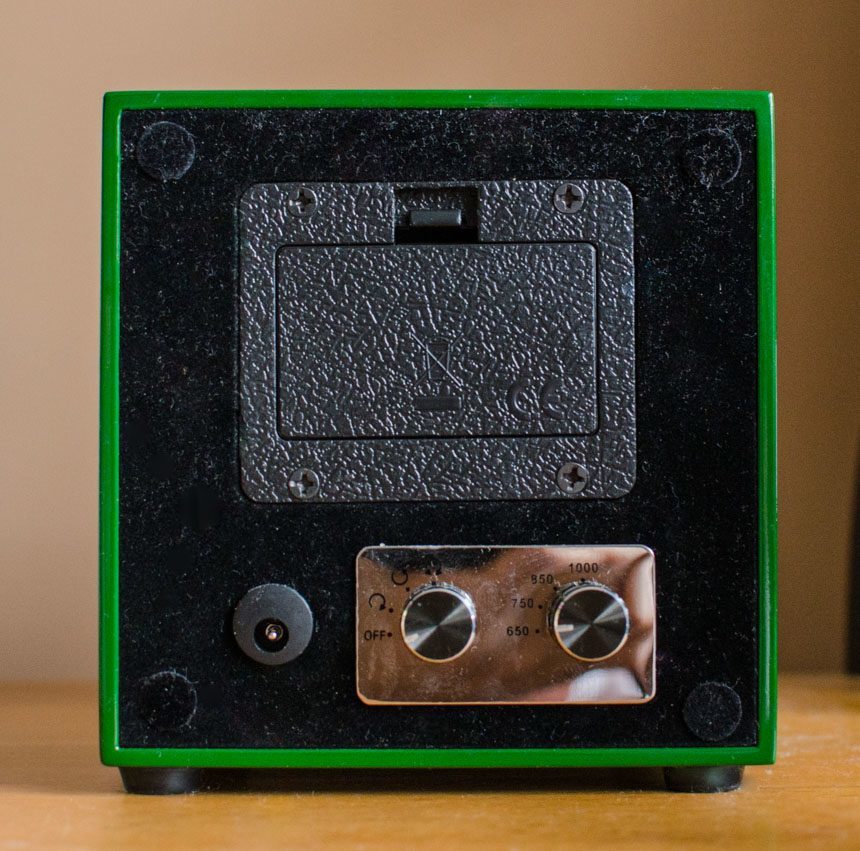 While the single winder is certainly compact at 4.3 × 4.3 × 5.9 inches (that is 11×11×15 centimeters) and occupies a relatively small amount of space on your desk or shelf, it is not that light or compact that I would recommend it for taking with you traveling. However, if such weird circumstances arose, it is good to know that the winder can also be operated by two AA batteries – in addition to the DC mains, obviously. On the back of this tiny, glossy box, you will find the AC socket, the AA battery compartment, and two small dials to operate the winder mechanism with.

As seen on the image above, the one on the left is used to turn the winder off entirely and to select between winding direction, namely clockwise, counter-clockwise and bi-directional – all three options one would expect. The other dial is to select the “TPD,” i.e., turns per day count, which can be 650, 750, 850 or 1000. Both dials require considerable force to be turned and pop firmly into their selected positions. The “super silent” motor inside really is barely audible. In perfect silence, it is, of course, recognizable, but even when working at my desk, I found the mid-frequency noise of the single winder, set within arm’s reach, was never annoying or obtrusive. 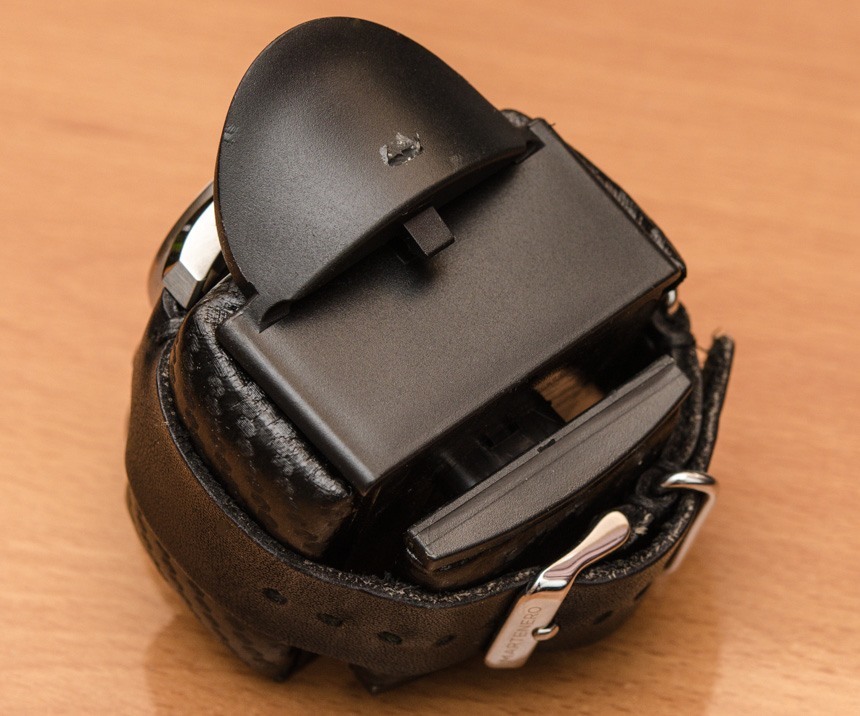 For those worried about getting their sleep disturbed by the winder’s sound – after all, everyone has different limits as to what is acceptable – it is good news that the motor works in 12 hour “shifts.” This means that if you start up the winder at 8 o’clock in the morning, it will wind the watch with short breaks until 8PM, when it will stop completely. By using this 12 hour interval, you can set up half a day’s worth of winding-free time, while during the other half of the day, your watch will be sufficiently wound. This is a small, but very useful feature.

An issue that I had with the single winder concerned its watch-holder. The holder is made of the more brittle kind of ABS plastic that is not very pleasant to the touch; rather, it is the kind which one hardly has many positive experiences with. The surface holding the watch is covered with carbon fiber patterned fabric that is much nicer to the touch, and should certainly keep your watch and bracelet safe from scratches. The holder pops into the winder’s compartment and can be taken out by squeezing two flaps, and while this takes a bit of practice, after a few times, one can get the hang of it. The holder also has an extending part – the one you can see on the image above, situated just above the clasp of the watch. By pressing it, this part extends by about an inch or so, hence accepting watches with long bracelets. The extension works as well as anything in molded plastic does, it is not a refined device but does what it has to do.

In short, the holder is a bit of a shortcoming of the Barrington Single Watch Winder, which is a shame, as the winder not only looks great on the desk or book shelf, but also works sufficiently and near-silently. Add to that the more affordable $160 (£99) price, and such nuances certainly become more acceptable – although they were not deal-breakers, by any means. 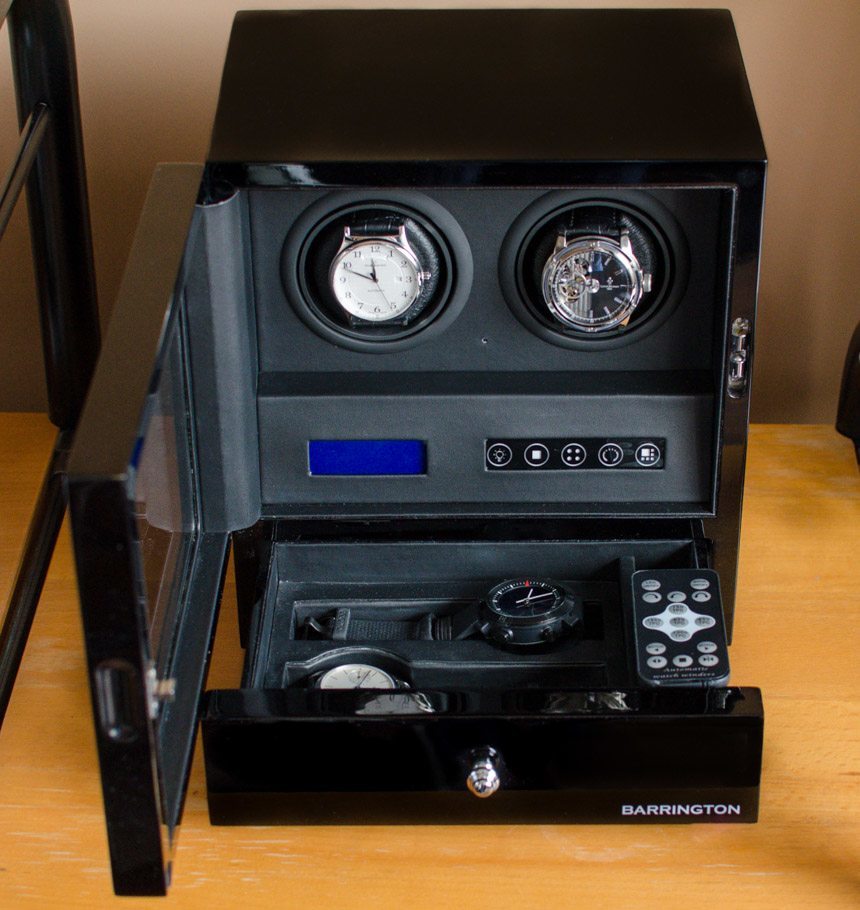 As one would expect, the more expensive – and more massive – Barrington Double Watch Winder gives more room literally as well as in price to get even the smaller details right. The Barrington Double Watch Winder does what it says on the cover: it incorporates two winding compartments, which can be operated separately from one another – more on that a bit later. The large, but still very manageably sized 9.5×7.1×10.3 inch (24×18×26.2 centimeter) case has enough room for a small drawer with a compartment for two watches, a few straps, and a strap changing tool. I found this to be useful with the setup you see above: two automatic watches found their place in the winding slots while a smart watch and a hand-wound timepiece were stored in the drawer. I will admit that I could not quite appreciate this safe and tidy way of storing watches until I tried it myself. 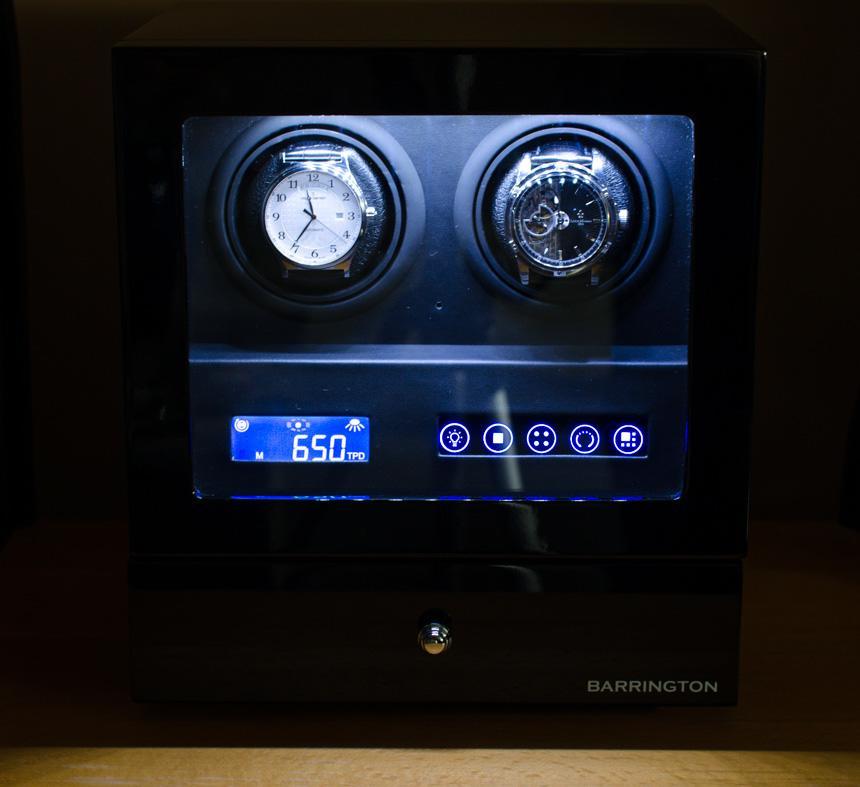 The winder comes with a remote control that allows for setting it up without having to open the large, wood and glass door that hides the main section of the box. Behind the glass is a rather large, white on blue digital display that allows for setting up the two winding motors separately. It is easy to use, highly legible, and definitely does not feel as cheap as similar small screens often do on other appliances. One gets to choose the winding rotation, the TPD (with an additional 1950 setting beyond those seen on the Barrington Single Watch Winder), as well as a motor selector and an LED on/off setting.

That’s right, a very cool detail of the case is the long LED strip built into the ceiling of the main compartment: it makes the watches shine as they are spinning around in perfect silence – the closed door helps to isolate just about every bit of mid-frequency winding noise coming from the motors. In fact, the LED can light up the rest of the shelf as well, making for a stylish – albeit arguably watch-nerdy – decoration to any bedroom or office. I quite enjoy this feature, although I found myself turning it off sometimes with the dedicated button on the remote control. 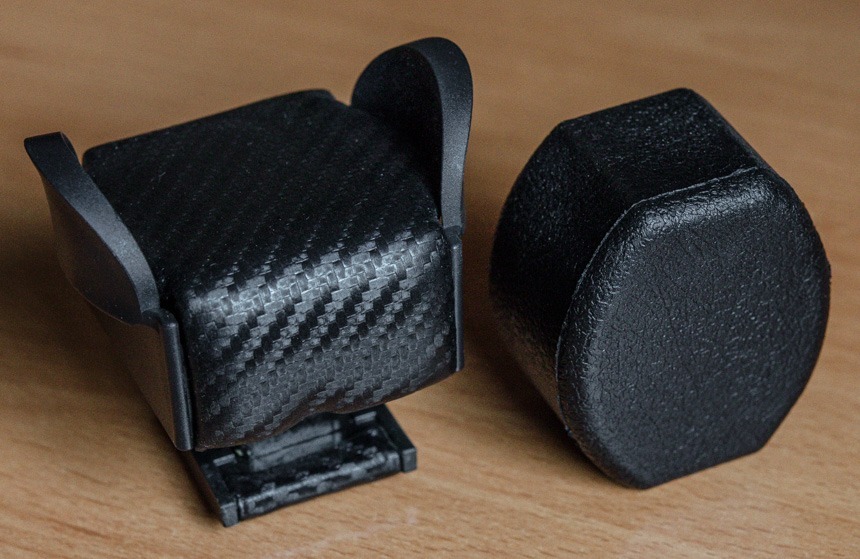 As opposed to the plastic holder of the Single Watch Winder, the Double version comes with two soft, fake-leather covered cushions that feel surprisingly nice to the touch. After placing the watch on the cushion it has to be squeezed and inserted into the corresponding slot inside the box – again, a bit of practice is necessary, especially in the case of watches with a thicker, more complicated deployment clasp that adds more “depth” to the watch. Nevertheless, I never had a watch get loose, let alone fall out, so this cushion-holder concept is definitely a safe and pleasant way of storing watches.

With its glossy, deep black finish, the Barrington Double Watch Winder looks the business, especially if one manages to keep it clean from finger prints and dust – it requires some effort, but the restrained and elegant looks sure do compensate. The Barrington Double Watch Winder is priced at $570 (£349), which is considerably more than the smaller version. Nevertheless, it is still relatively affordable, especially if we consider the solid construction, the superb practicality and that its sleek looks and relatively compact size work well with most interiors. 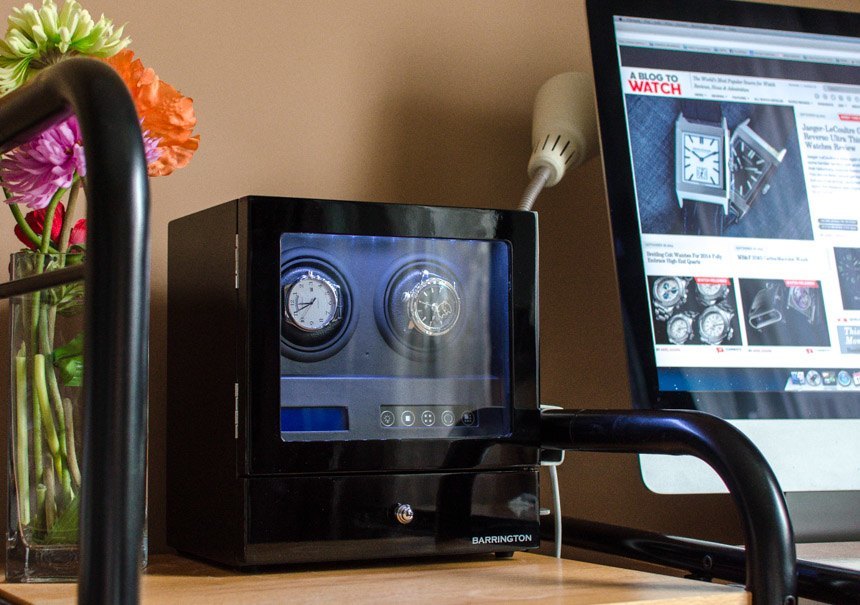 In essence, these two offerings by British Barrington Watch Winders are among the few more sensibly priced watch winders that can be recommended not just as mere tools, but also as more reliable and stylish items. Both models show that, despite a few minor but arguably enhancement-worthy details, considerable thought went into their design and that they are not off-the-shelf solutions. Either of them make for a recommendable device for anyone in the market for a single or double watch winder – the question is just which size and color to get. barringtonwatchwinders.com