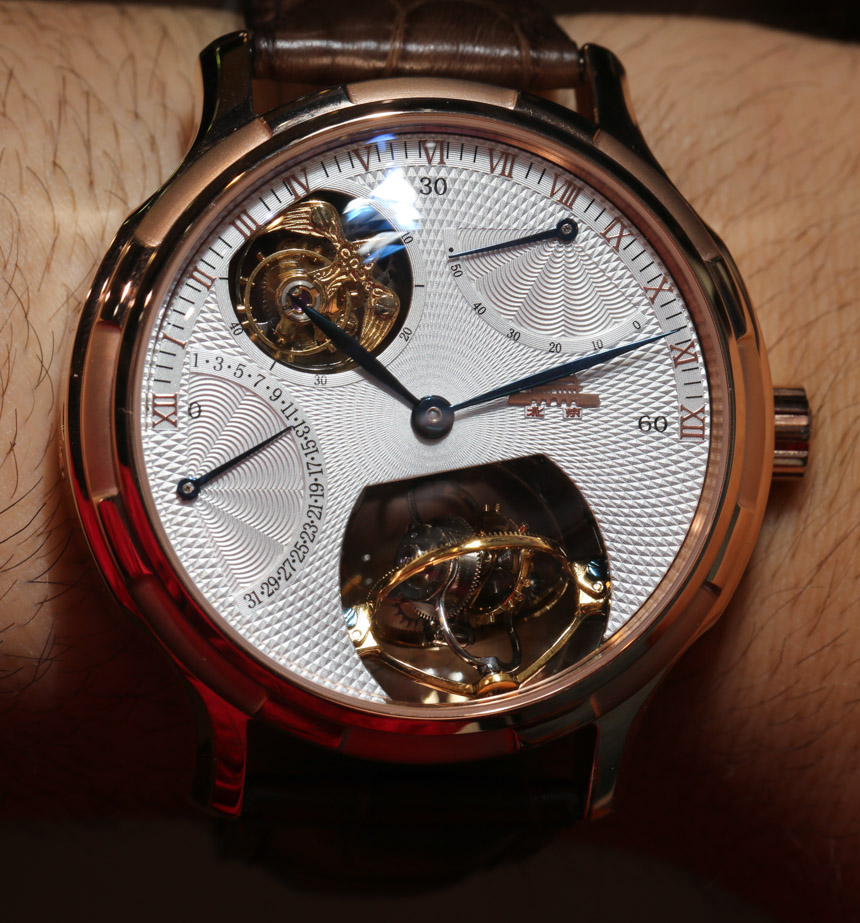 It would be wrong to look at this watch dial and assume you can read the time as you would on most other round-dialed watches. In fact only the upper half of the dial is used to read the time. A shortened scale for all 12 hours is placed on the top half of the dial, and both the hour and minute hand have retrograde mechanisms that have them jump back to the starting point when necessary. This makes the dial extremely confusing at first if you don’t know what you are looking at. I was playing with it to set the time and noticed the hands were jumping around wildly. “Is the watch broken?” I wondered until I realized what I was seeing. The large bi-axial tourbillon at the bottom of the dial is so tall that the watch maker decided he never wanted the hands to go over it. The double retrograde system for the hour and minute hand is designed to prevent the hands from ever accidentally touching it. The benefit is a watch with such a tourbillon system that does not require a “bubble” in the crystal. At 17.2mm thick, the watch could certainly have been thicker.

The tourbillon element of the Wu Ji is quite amusing. What you have is a bi-axial tourbillon that is basically a smaller tourbillon inside of a larger tourbillon. Then you have a traditional flying tourbillon as a separate element on the dial. I’ve never before seen a watch with two different types of tourbillons on the dial. It is interesting, to say the least. The traditional tourbillon has a pleasant bird-shaped bridge which I enjoy. In addition to the tourbillons and the unique time telling system, the Wu Ji watch also contains a retrograde date indicator as well as a power reserve indicator. The manually wound movement holds just over 50 hours of power reserve. On the rear of the watch is an additional complication; a moon phase indicator, with a blue enameled disc. 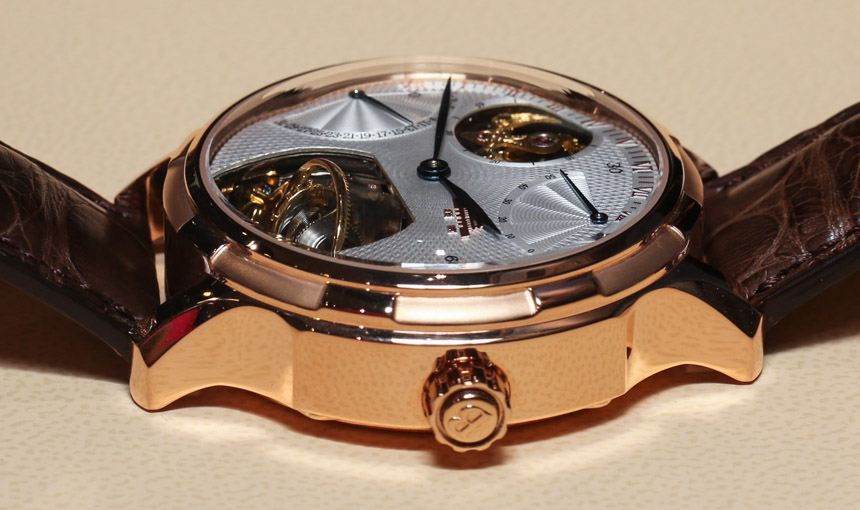 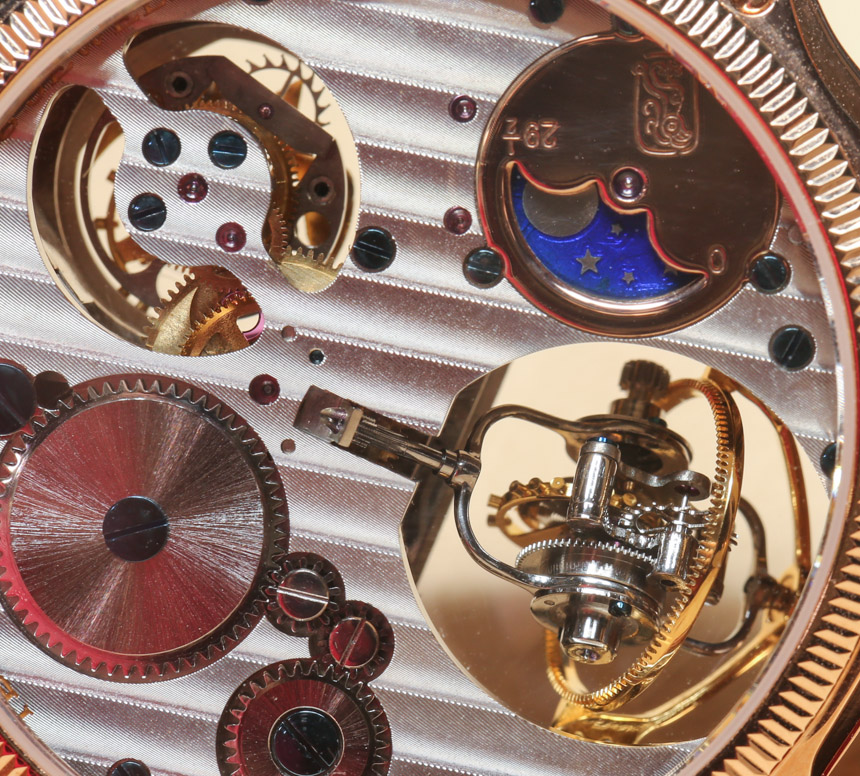 Claimed accuracy for the caliber TB09 movement isn’t bad. Beijing Watch Factory says the Wu Ji is accurate to about plus or minus 10 seconds a day. That isn’t quite chronometric standards, but probably in line with many Swiss tourbillons. Other Chinese movements can often be off by as much as a minute a day. So all things being considered, 10 seconds a day for this type of complex movement is pretty good.

What the watch cannot escape from is China’s ubiquitous use of machine-decorated parts. Timepieces of this quality in Switzerland exhibit a high level of hands-on attention. Of course the Wu Ji was hand-assembled, but like its lower-priced brethren, it uses parts that have machine polishes. Skilled watch lovers, for example, can always spot “Chinese Geneva stripes” as oppose to the more refined Cotes de Geneve lines on Swiss watches. The Chinese watch industry has all the money and motivation to up their ante a bit when it comes to decoration, but it is possible it just isn’t in their DNA. Traditional Swiss watch making goes to great and careful lengths to ensure that movement aesthetics are perfect. They use special woods to polish metals and age-old techniques that perhaps never quite made their way over to China. The real culprit however is probably sheer time. Watch movement decoration is the most time consuming part of high-end watch making. To keep prices and production schedules reasonable, I simply don’t think that China can handle the intense slowness of the Swiss. 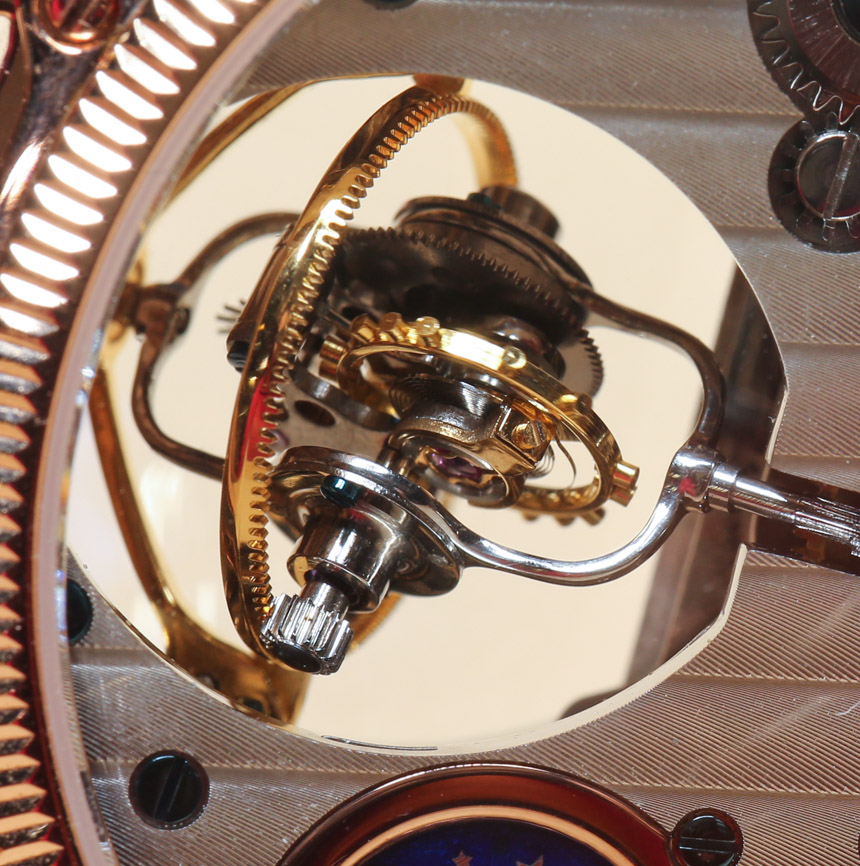 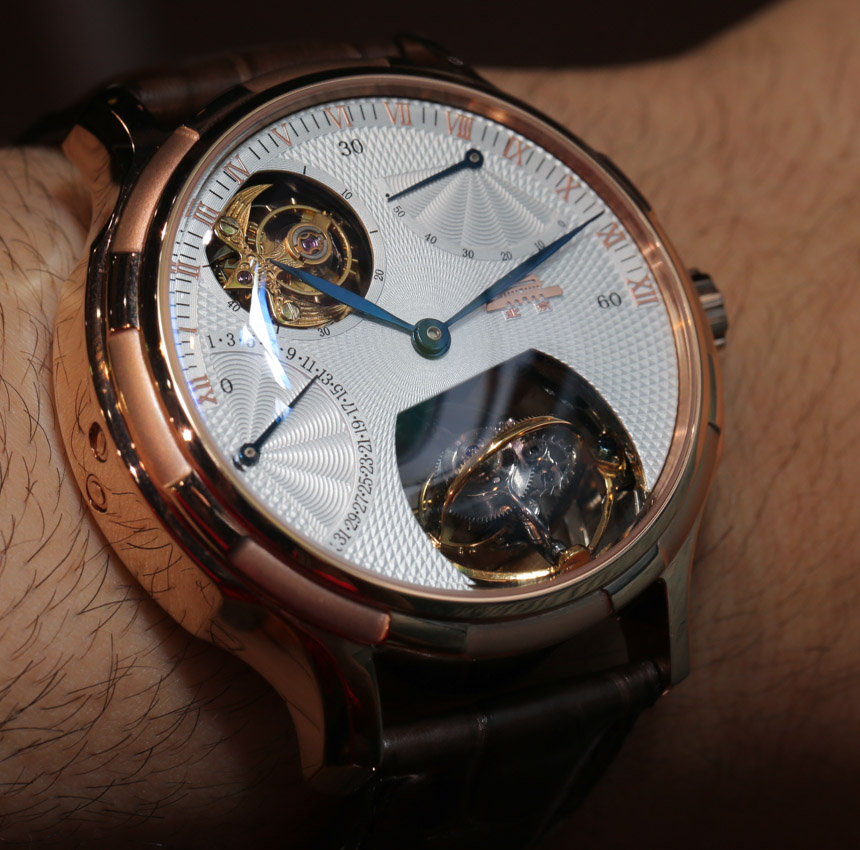 On the wrist, the Beijing Watch Factory Wu Ji is 44mm wide and sits large thanks to its wide lugs. The case comes in either 18k rose gold or platinum. The inspiration for the design is clearly Greubel Forsey-ish, but it looks decent and I am happy that it isn’t just something simple and round. Nothing like a boring perfectly round case to destroy an otherwise unique wearing experience. The Infinite Universe is conservative, but has learned that boring isn’t the same thing. The level of uniqueness mixed with traditional looks is an art that Europeans have learned well, and the Wu Ji is the latest to replicate that. Does it succeed? It really depends on who you ask.

Beijing Watch Factory has succeeded in impressing me – a lot. It has also succeeding in producing something that is both unique and interesting, but is also the type of thing that even the most snobbish watch lovers will take notice of. Complex Chinese watches are here and here to stay, and they are getting better each year. Are they alternatives to the more expensive Swiss stock? Yes, but they aren’t outright replacements. Swiss watches will probably always beat Chinese watches when it comes to sheer refinement and attention to detail. More and more I am convinced that this is caused by a fundamental difference in culture and values. It isn’t a matter of better or worse, but what goes into the production of tiny mechanical art. Having said that, the Chinese will always beat the Swiss when it comes to price.

What makes the high-end Chinese watch industry unique is that they are trying to provide something that the current culture is not set up to do as well as the Europeans, and to me that is an admirable feat. In a huge way it is ironic as the Chinese are the post ardent appreciators of Swiss watch making craftsmanship. Perhaps because it is so counter to their own culture’s production values. Pride however is strong in both cultures, and brands like the Beijing Watch Factory thrive on being able to be Chinese and be the best at what they do. As it stands we will continue to watch as the Chinese develop new and interesting movements, and no longer consider them as a a mere novelty not worth the investment of real watch lover money. And an investment the Wu Ji is. Given the complexity the watch it is arguably well priced, but still lofty, going for between 460,000 – 520,000 Chinese Yuan. That is about $75,000 – $85,000. en.bjwaf.com