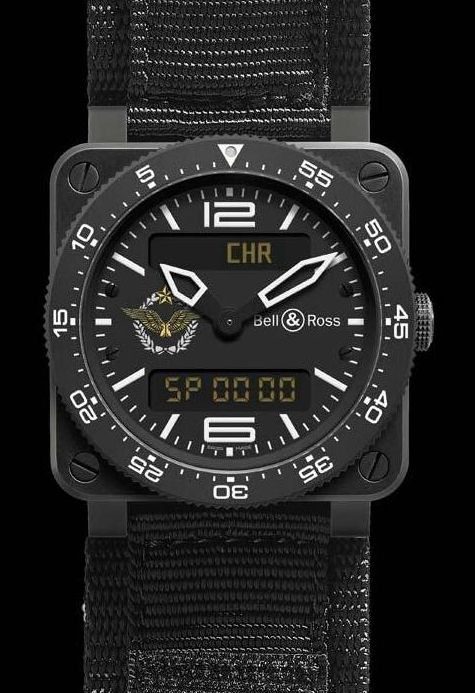 There are two ways that this watch was made – Note that Bell & Ross is based in France. Either the French military strong-armed Bell & Ross because they felt like bullying someone around, or Bell & Ross begged the Air Force for the PR opportunity as the military arm probably had better things to do, and was not interested in gifting a select bunch of pilots with an expensive watch. Who knows how it went?

Well what ever the impetus for the creation of these Bell & Ross French Air Force watches, they are pretty neat. Basically, they are an exact melding of the traditional Bell & Ross BR01 design, mixed with the ubiquitous Breitling Aerospace (and its derivatives). It is funny because even though the Breitling Aerospace is getting close to being two decades old from first appearance – it is only now getting a serious number of homages and copycats. These are harsh words in the watch words, but they are not bad. The industry is based around a combination of reformulation and flattering mimicry.

So looking at the Bell & Ross BR03 Type Aviation we can deduct a couple of things. First, it is not the large size of the BR01 which is 46mm, but instead the smaller 42mm of the BR03. This is only the first time one of the BR03 style watches is provided with a rotating bezel, which is nice. Useful for diving as well as aviation applications. Inside is an as of now undisclosed ETA quartz movement. Each of the functions are activated and used through the crown, just like with the Breitling Aerospace. Pushing the crown in allows you to scroll through the functions such as chronograph, alarm, timer, and different different time zones. It might seem awkward if you haven’t used a watch like this before, but it is rather simple to be honest.

The LCD panel layout is similar to that in the Breitling, and is also done in negative LCD, that makes it look a lot better. Normal LCD panels shade in the areas of information making them look dark, while negative LCD’s do the opposite giving the background a higher quality darker look (which I prefer). The outlined (skeleton) hands on the watch are attractive, and serve nicely to not hinder the view of the LCD windows too much.

The two versions of the watch come on either a canvas or rubber strap, and in PVD or a normal steel finish. They are a great and new direction from Bell & Ross, as they are not just instrument looking, but actual instruments. The initial run of the 250 limited edition is reserved strictly for the French Air Force, but there is good news. Soon, the watches will enjoy commercial availability complete with the French Air Force seal on the face of the watch. Pricing has not been announced, but expect it to be commensurate with other BR03 watches minus the cost of an automatic movement. I’d figure about $2,500 retail, maybe a bit more with the “Bell & Ross premium.” Overall really nice. Oh, and don’t you always like the quality of Bell & Ross marketing photos?