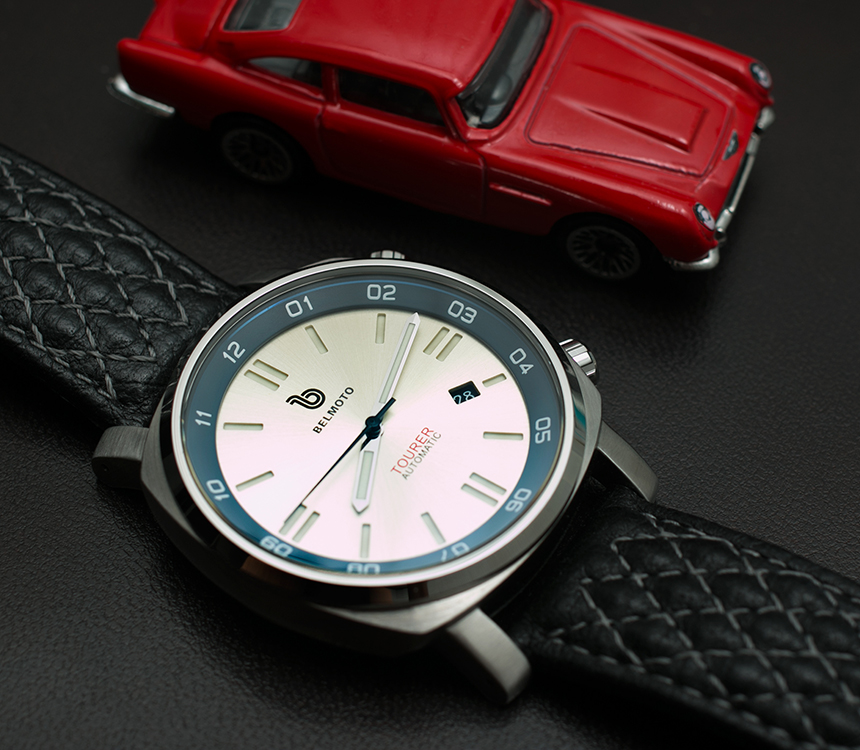 While independent watch brands and startups abound, there are some that have gained the respect of the watch community and become more established. Belmoto is not one of those – because technically it is a new brand which launched in late 2015. But really, it is a spinoff of Magrette watches that has a strong following and a reputation for producing solid products at good values. So Belmoto’s debut with this vintage race car-inspired, three-hand automatic Belmoto Tourer can be seen as an evolution of an experienced brand, though it can just as easily stand on its own merits of style and quality. So, having worn it for several weeks now, here is my review of the Belmoto Tourer. 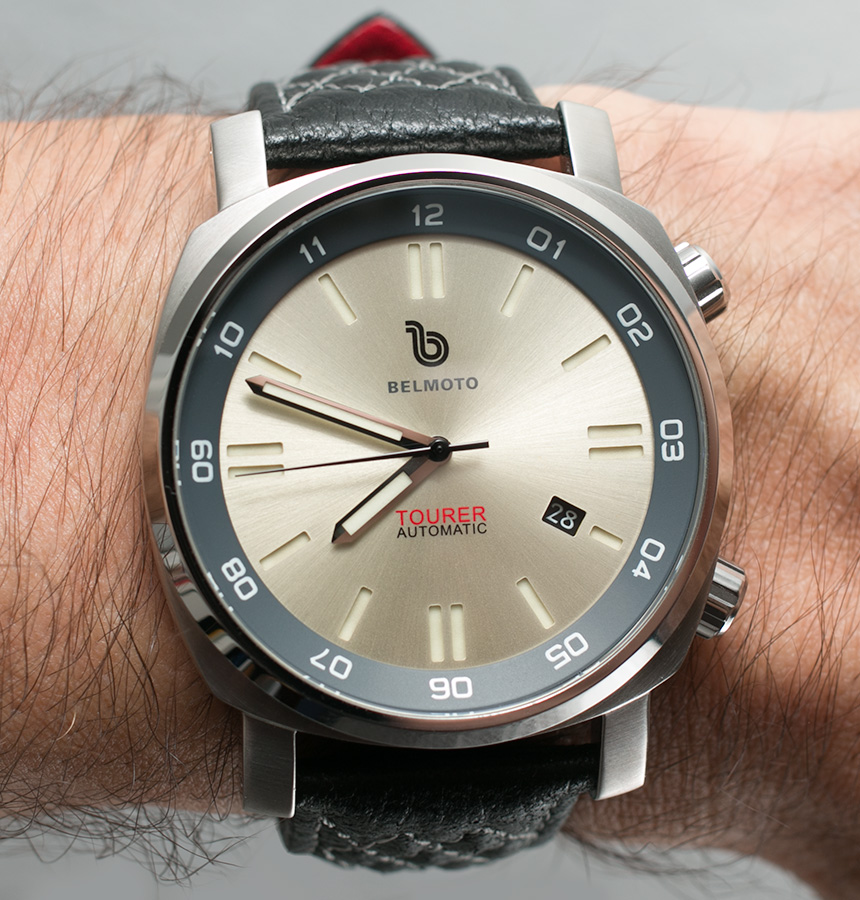 Magrette was founded in New Zealand by Dion McAsey and has been popular and going strong for years, with aBlogtoWatch having covered its products extensively since 2009. Besides a stylish vintage race car aesthetic for the Belmoto Tourer, McAsey continues pushing his vision of putting together timepieces that are of high-quality but also affordable. High-quality but affordable sounds pretty good, right? This is possible for Magrette and Belmoto watches because parts and assembly are truly international, and the origin of components will differ depending on the model. That, of course, along with the brand’s dedication to getting it all right is what results in high value-for-price ratio. The point is that while you are not getting a Swiss Made label, and while it is difficult to compete with the economy of scale enjoyed by, say, Seiko – you are getting a solid build, quality materials, and compromises that should be more than justified for the price. 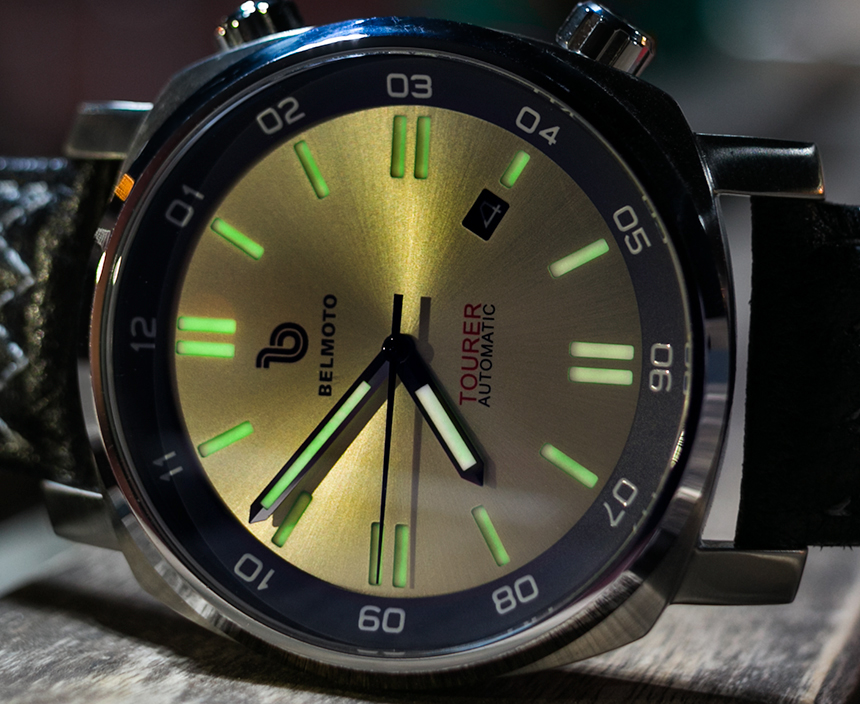 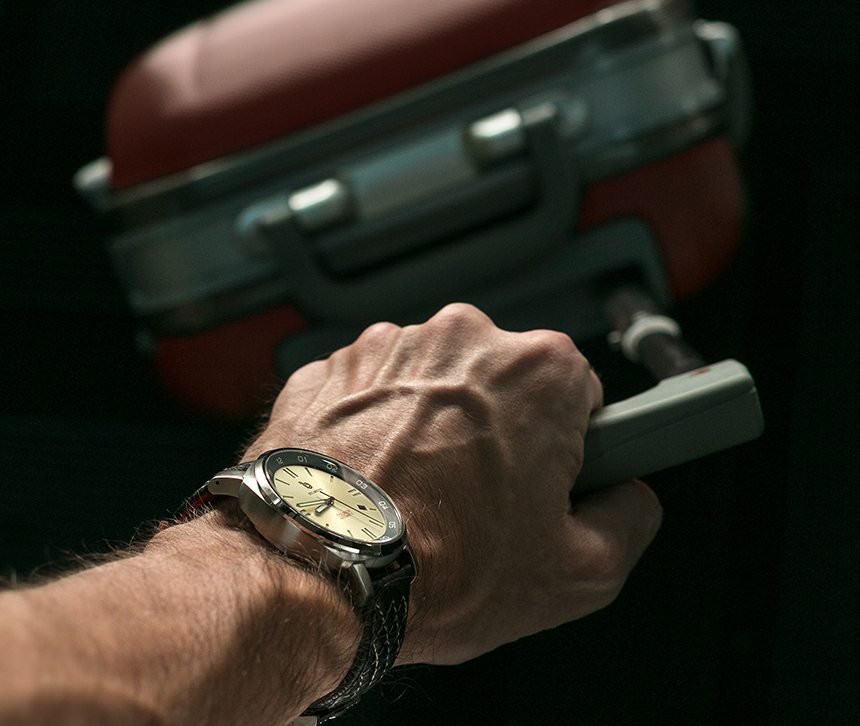 So, why a whole new brand? Magrette is more about military and dive watches, so that identity will not be diluted by Belmoto as a car-themed brand. Margette’s watches were also all limited editions and all mechanical. Belmoto watches are not limited, and the brand debuted with a quartz chronograph along with this automatic mechanical Belmoto Tourer. Belmoto distinguishes itself largely with style, but we’ll come back to that, as some specs and technical observations are in order first. 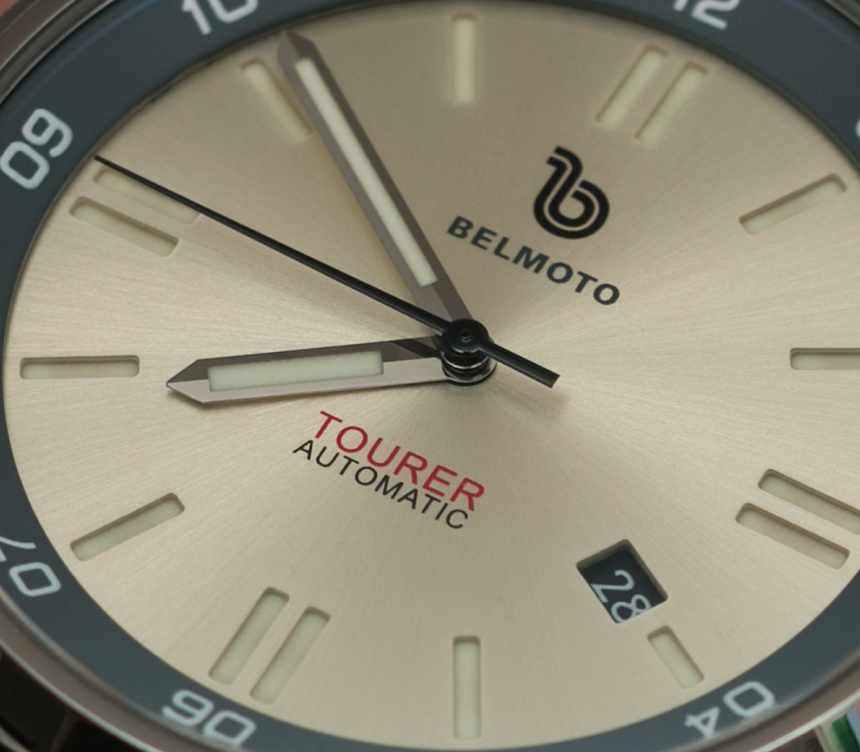 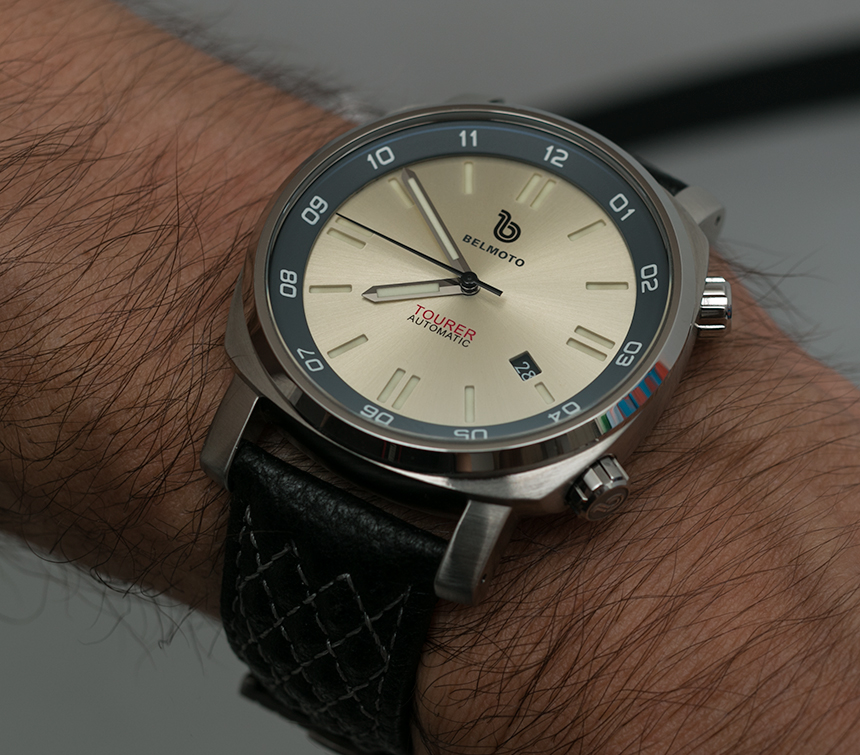 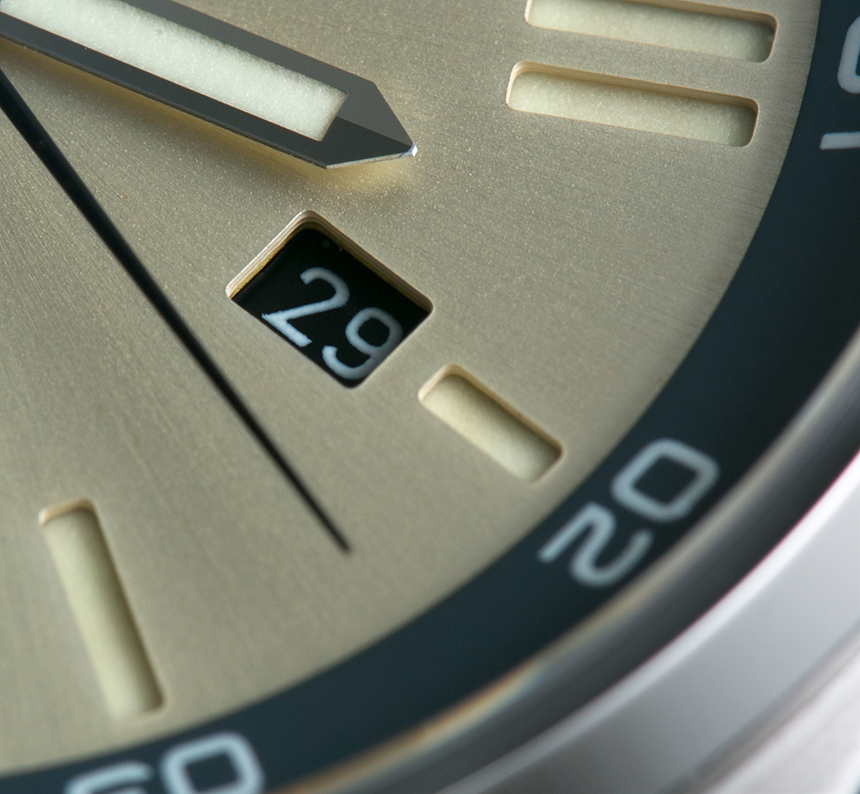 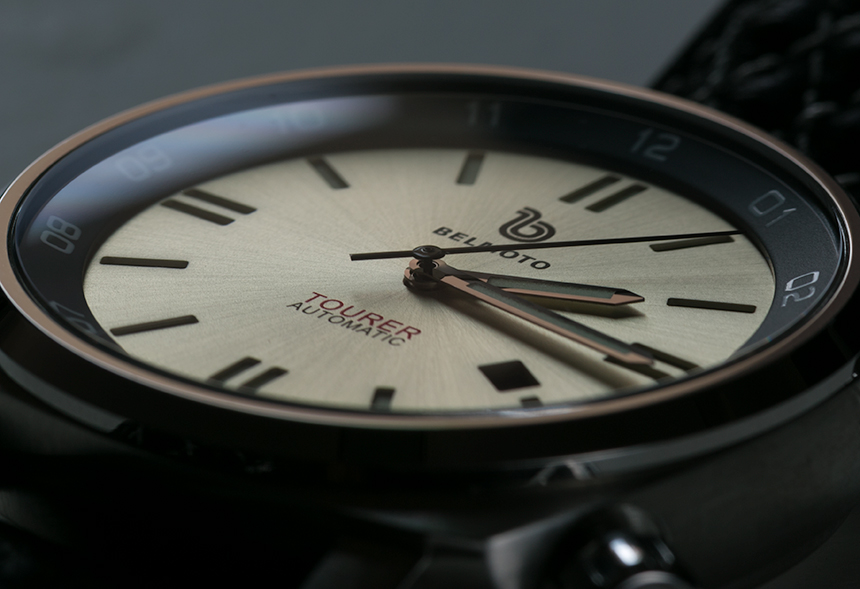 When you have set the internal bezel where you want it using the crown at 2 o’clock, you screw the crown down again to ensure the watch’s water resistance. But in doing so, the bezel inevitably moves a hair counterclockwise. So it is very difficult to get it lined up perfectly with the indices, and you have to overshoot ever so slightly in anticipation of that – a warning to the OCD-inclined. You may be able to see in some if my pictures that it is not exactly lined up. 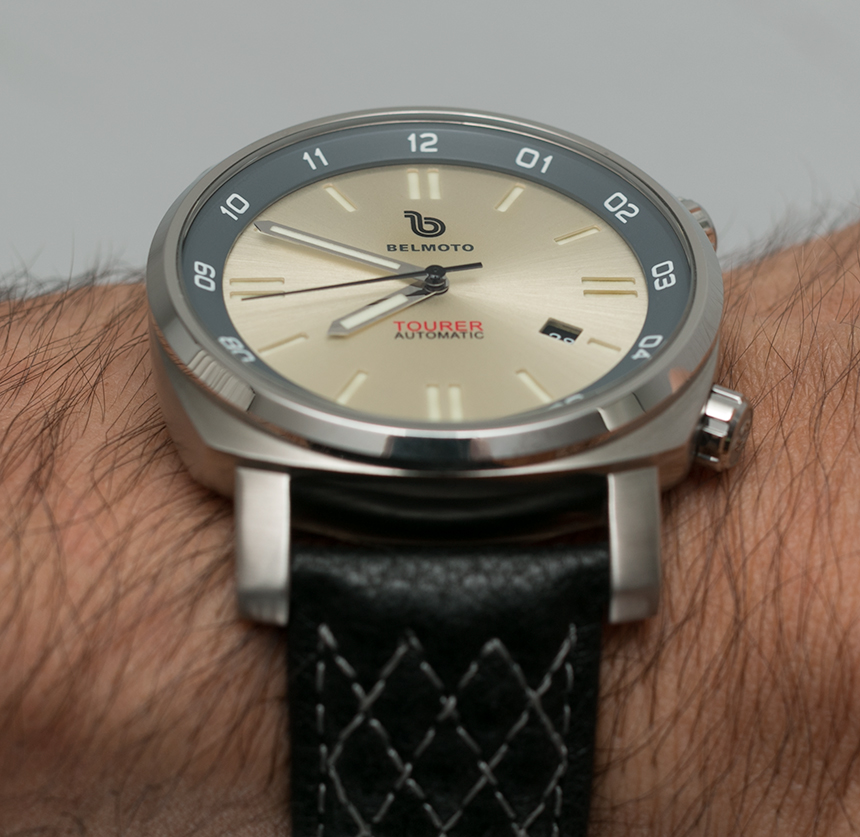 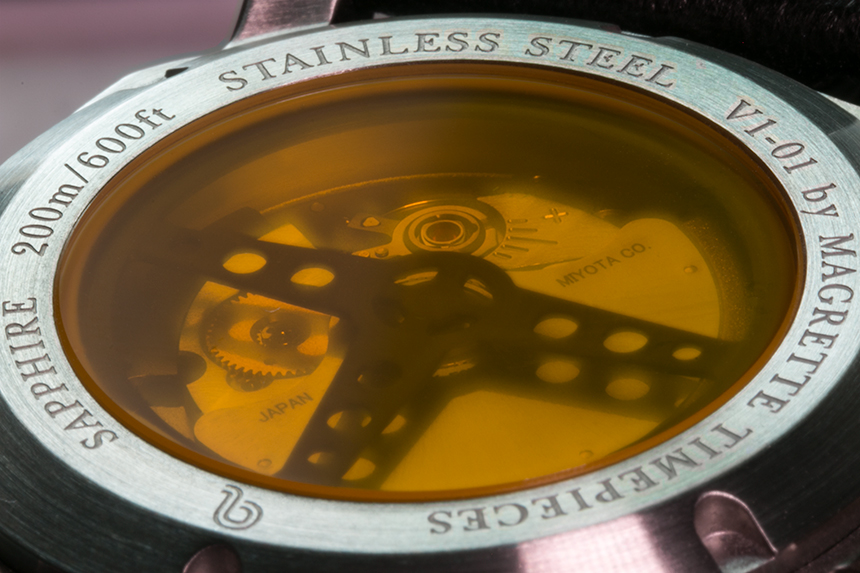 But on an upbeat note, those screw down crowns help achieve the Belmoto Tourer’s 200m water resistance. That’s the same water resistance rating as on the similar Magrette timepieces that have solid casebacks, but the Belmoto offers an exhibition caseback. For a watch without even any apparent aquatic associations, that is pretty good. I’ll return to the caseback further below… 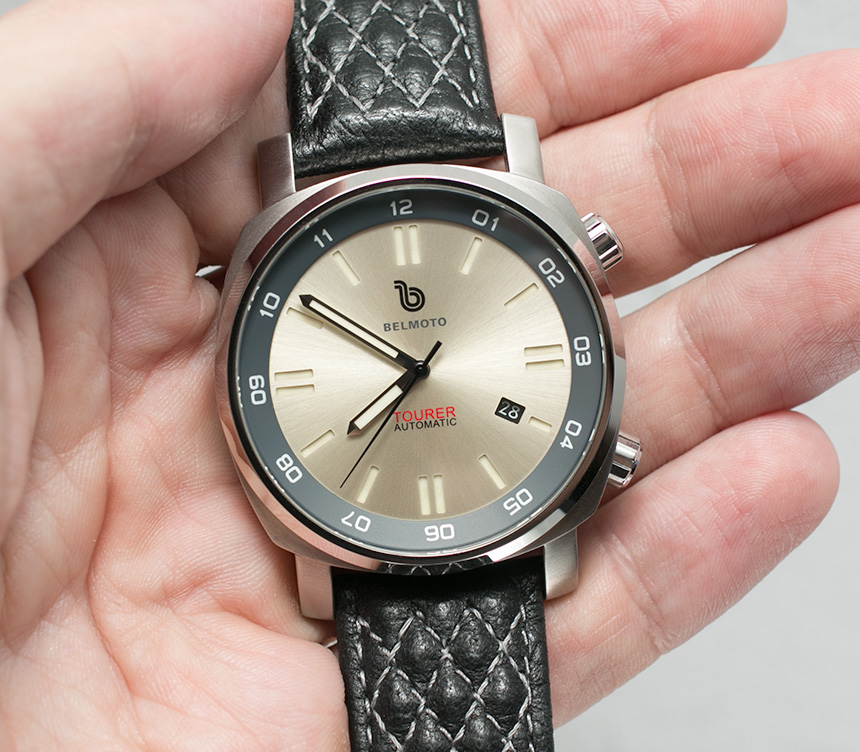 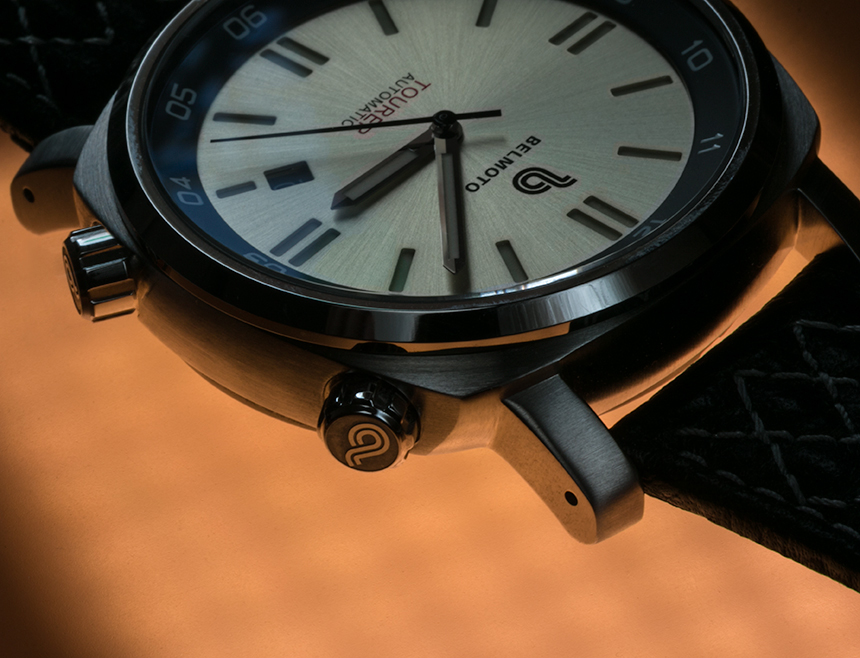 I know that Panerai comparisons are thrown around often for a wide variety of watches, but I think it is pretty appropriate here. While not looking “too much” like a Panerai outright, multiple elements of the Belmoto Tourer offer that same appeal (and I mean that in a very good way). I see it in the cushion case shape and its profile, the lugs, large buckle, and obviously, the “sandwich dial” and handset. Do you see that? At the same time, the Belmoto Tourer feels different enough not to be mistaken for a wannabe. The black-dial Belmoto Tourer would have even more of a Panerai look, if that is what you are after. I wonder how it would look with a dramatically domed crystal (Belmoto calls it double domed sapphire, but it appears very flat to me). 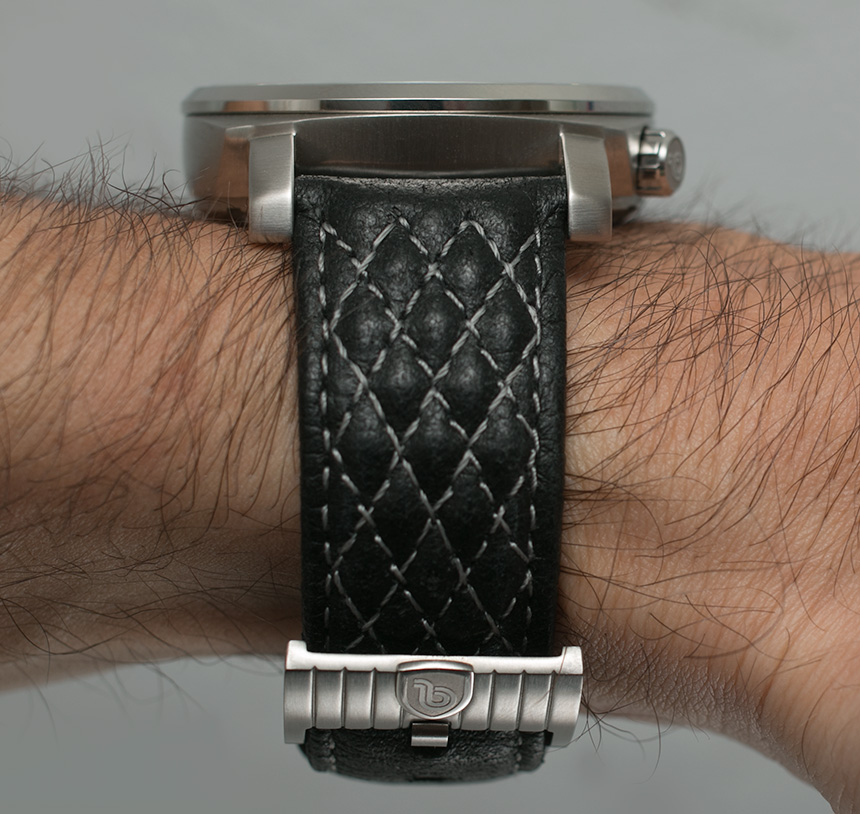 At 42mm wide, the Belmoto Tourer is not “big” in a broader context, but it wears prominently on my boney 6.5” (17cm) wrist. With a thin bezel, the dial is wide, and with a reasonable thickness (about 12mm) and a little bit of heft, I can assure you that it does not wear daintily. I found the Belmoto Tourer to be very wearable with a lug-to-lug width I measured to be about 51mm. On the wrist, Belmoto’s large custom buckle adds significantly to the visual presence of the watch, and the very nice strap adds to the automotive theme. 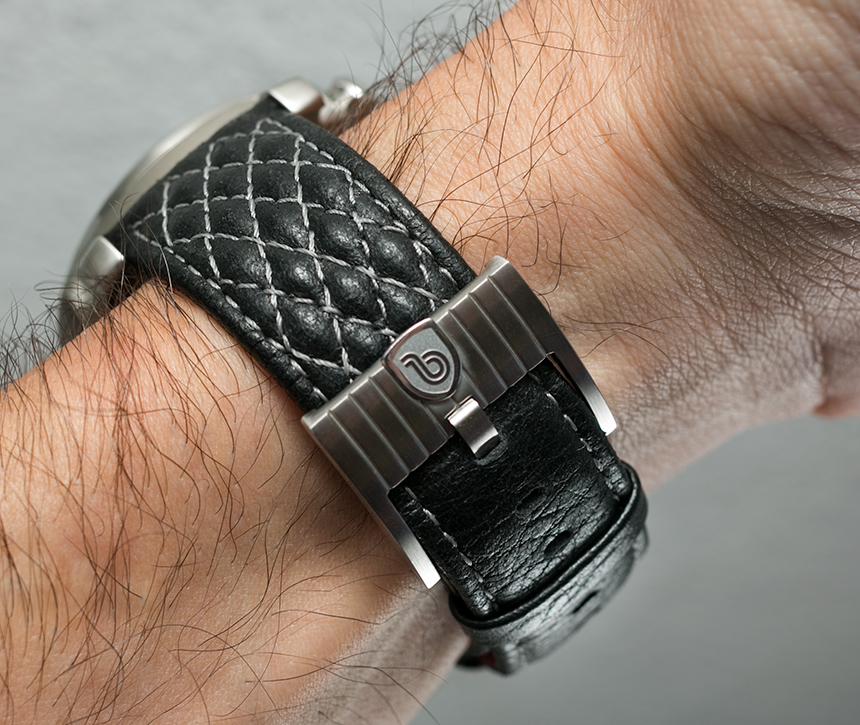 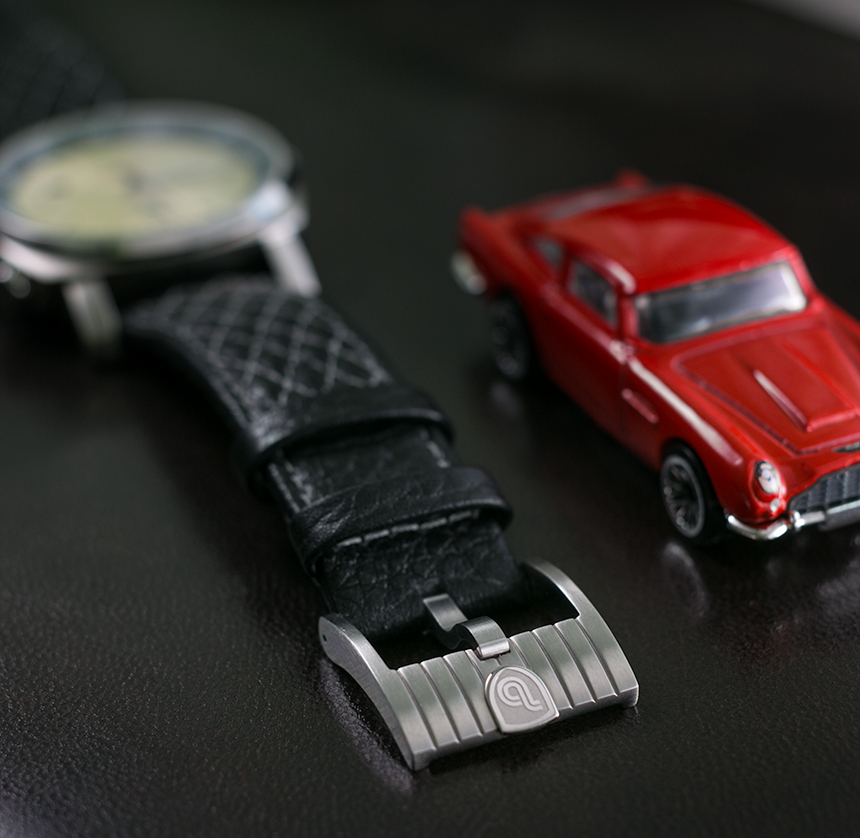 The drilled lugs make strap changes quick and easy, and happily, the Belmoto Tourer is versatile enough to provide you a fertile ground for strap experimentation (kind of like a Panerai). I am the kind of guy who immediately starts thinking about possible strap variations for a watch, but you may want to enjoy the one the Belmoto Tourer comes on at least for a little while. This calf leather strap is one of the more overt vintage race car references on the watch, with a look and feel very reminiscent of the leather interiors of sports cars from not so long ago. It is comfortable and I enjoyed the sporty flash of red from the inner Lorica lining.