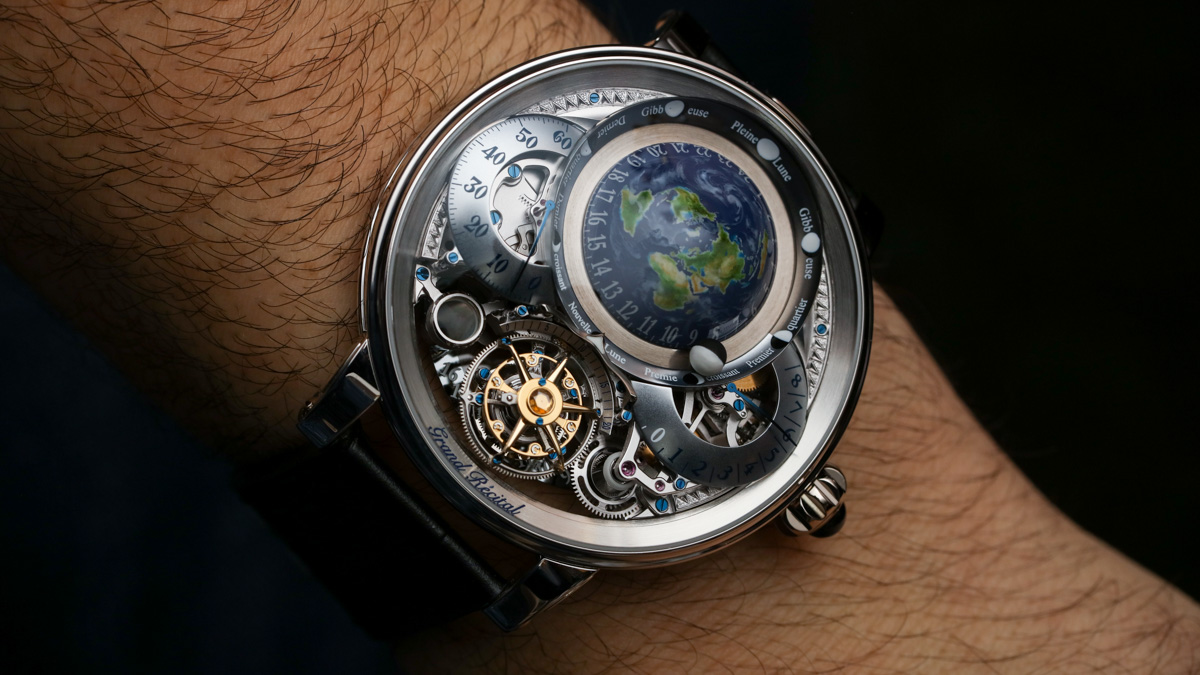 Understanding just what the Récital 22 Grand Récital watch does is actually part of the fun. The incredibly complicated in-house made caliber 17DM03-TEL mechanical movement has indicators on both the front and rear of the watch. Those familiar with mechanical watch complications should be able to figure out pretty much everything the movement displays, but if you want a real treat, just pull off your Récital 22 Grand Récital in front of a layperson and see them struggle to determine even the time. Most people seeing the Bovet Récital 22 Grand Récital will no doubt admire the blues and greens of the painted Earth and focus on the spinning motion of the tourbillon. Bovet refers to the astronomical display on the front dial of the Récital 22 Grand Récital as a “Tellurium-Orrery.” This type of orrery has the Earth opposite the tourbillon (which serves as the regulation system of the movement) to indicate the seconds, and to represent the position of the Sun. Around the Earth is an orbiting sphere which represents the Moon. It also turns in order to demonstrate the moon phase from the perspective of that part of the Earth. With the tourbillon positioned as the Sun, the geometry of how light plays with the Moon can be visually understood in appreciable detail. A scale around the Moon sphere further articulates the current phase on the sloped flange ring.

To the left of the Earth display is a retrograde minute indicator and to the right of the Earth is a power reserve indicator. You’ll notice that the movement includes a total of nine days of power reserve. I love the sloped retrograde displays and the curved blued hands which follow them. One final complication on the dial is a secondary display for the date. This is seen through a deep circular window just to the left of the double-sided flying tourbillon. Turn the Bovet Récital 22 Grand Récital over and the movement has more information for the user to digest. Here you see the complete perpetual calendar display with windows for the leap year, day of the week, and month. The date is represented via yet another retrograde scale and there happens to be another small indicator window for the hours. The caliber 17DM03-TEL movement is produced from 472 parts and receives its nine-day power reserve from a single mainspring barrel with the balance wheel’s operational frequency being 2.5Hz (18,000 bph).

Mr. Raffy makes an ideal model for his timepieces mainly because he makes these products first and foremost to satisfy his own tastes. Products such as the Récital 22 Grand Récital demonstrate Bovet’s dedication to authentically continuing the age-old craft of building miniature cities in metal and other materials designed to track and indicate the time. The romance of being able to read the time as a function of the rotation of the Earth is palpable when wearing a product such as this and more than makes up for being an avant-garde display. Let’s be honest, anyone getting a Bovet Récital 22 Grand Récital certainly has other timepieces he or she can wear when simply wanting to know the time. As Mr. Raffy likes to say, the Récital 22 Grand Récital is certainly rich with “artistic density.” He and I both share an appreciation for such efforts. Bovet manages to release at least one new Récital watch per a year, and even though these models build on one another, each is a considerable feat unto itself. In a sense, the regularity of these watch releases is a testament to the market for these watches, as well as the fact that few brands such as Bovet rely so heavily on masterful products such as this to extend the brand and delight its customers. Larger Swiss watchmakers once in a while come out with a mega-complicated timepiece akin to the Récital 22 Grand Récital as marketing halo products with hopes of selling a higher volume of less complicated timepieces. Bovet is one of the few brands that continues to put so much emphasis into wildly unorthodox watches such as the Récital collection models with a design volume and release frequency that can be characterized as “prolific.” I for one really enjoy each new iteration of the Récital watch family and applaud Mr. Raffy and the Bovet brand for championing these original and provocative luxury timepiece products.