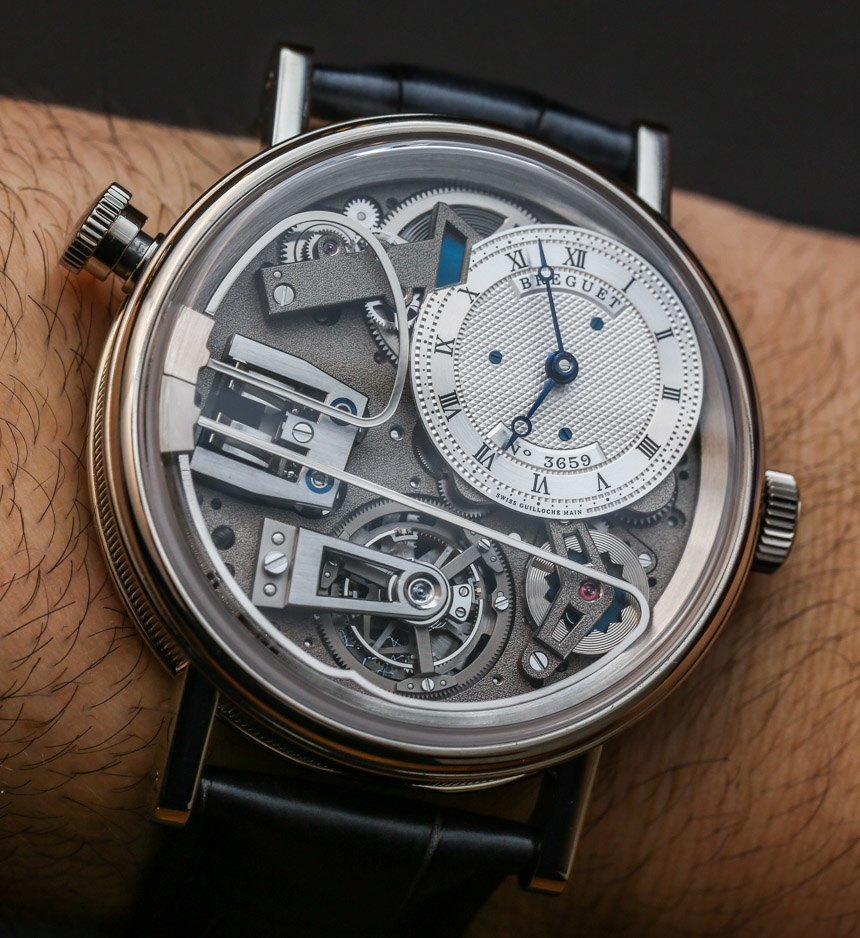 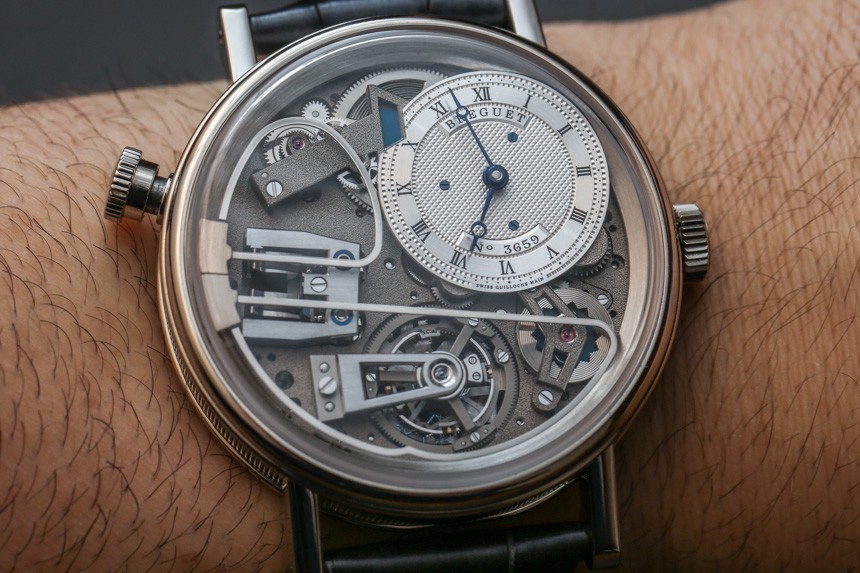 2015 marked the 10th anniversary of the Breguet Tradition collection, an occasion which the brand chose to commemorate with a singular haymaker of a watch: the Breguet Tradition 7087 Minute Repeater Tourbillon. Though this watch was announced at Baselworld 2015, as we prepare for a fresh salvo of show-season announcements from the 240-year-old company, we revisit the 7087 – a marriage between Breguet’s most historically significant complications and modern technologies, to yield a watch that makes no apologies for both presentation or price tag. 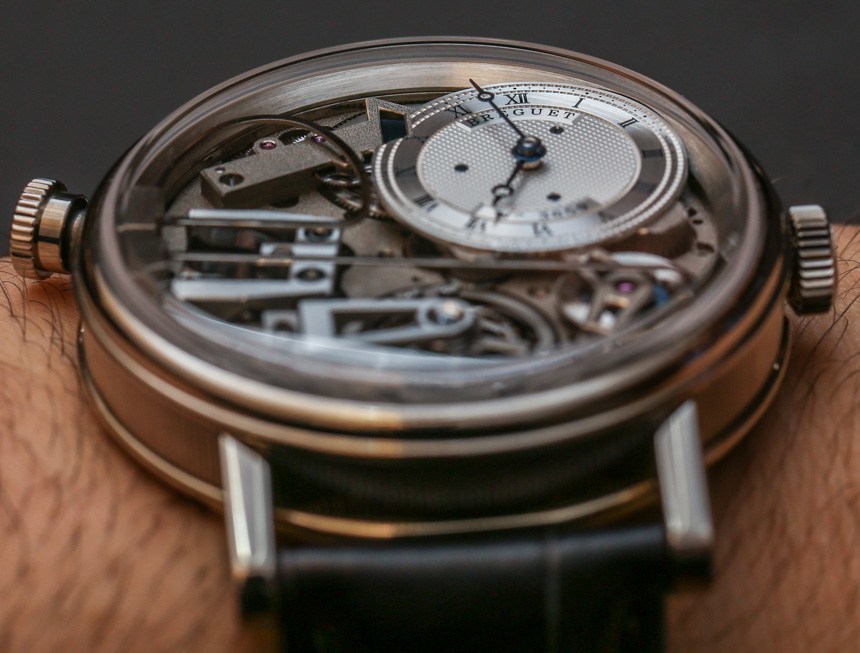 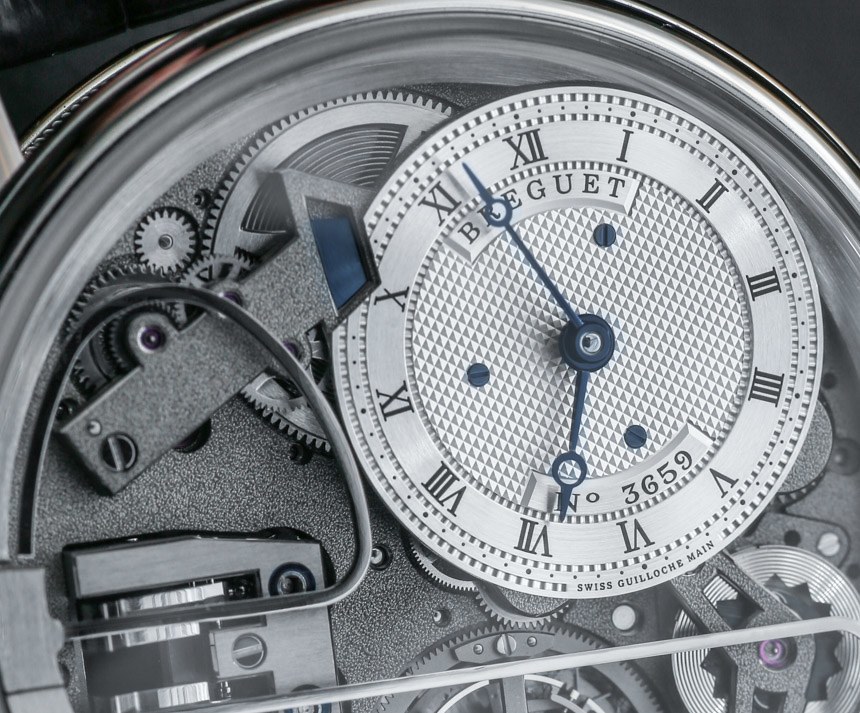 There are two very distinct, opposing flavors of Breguet watchmaking: there’s the subtly sporty, ultra high-end Type X series for those looking for a slice of one of the oldest surviving names in watchmaking in classical tool-watch form. Then, there’s the Tradition line – arguably the tip of the Swatch Group spear when it comes to the purest form of horological innovation. We recently spent time with the Tradition 7077 Chronograph – a watch Ariel called “a real watch-lover’s watch,” following its debut at Baselworld 2015, so naturally, a deeper look into the Tradition line is warranted. 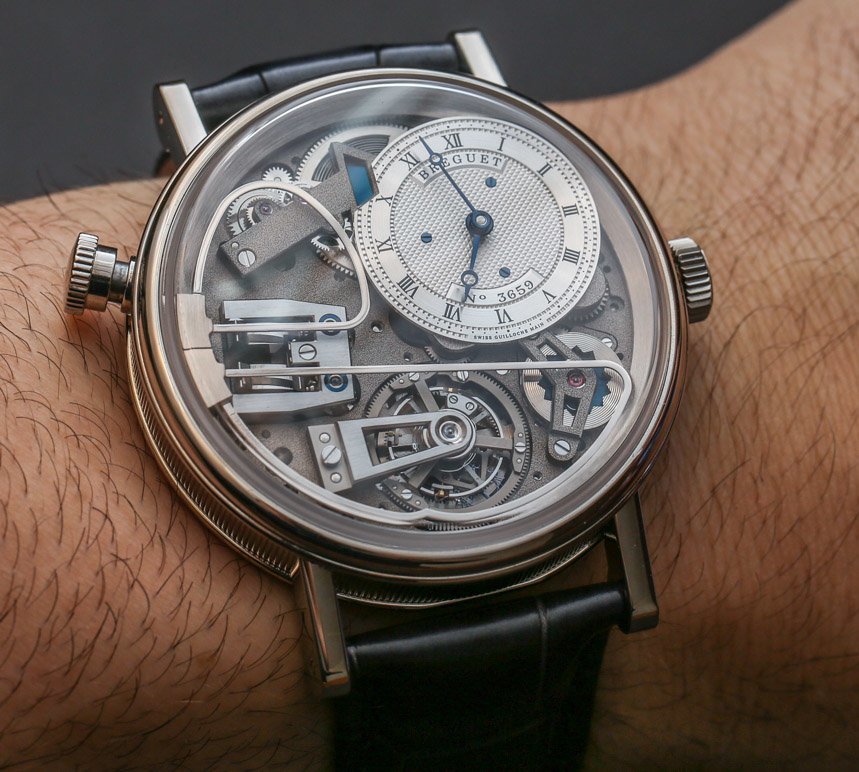 With origins dating all the way back to the late 1600s, it could be argued that the minute repeater is at the apex of watchmaking expertise, so it makes sense for Breguet’s Tradition series to include a minute repeater in keeping with the brand’s commitment to marry modern innovations with its own foundations of watchmaking. 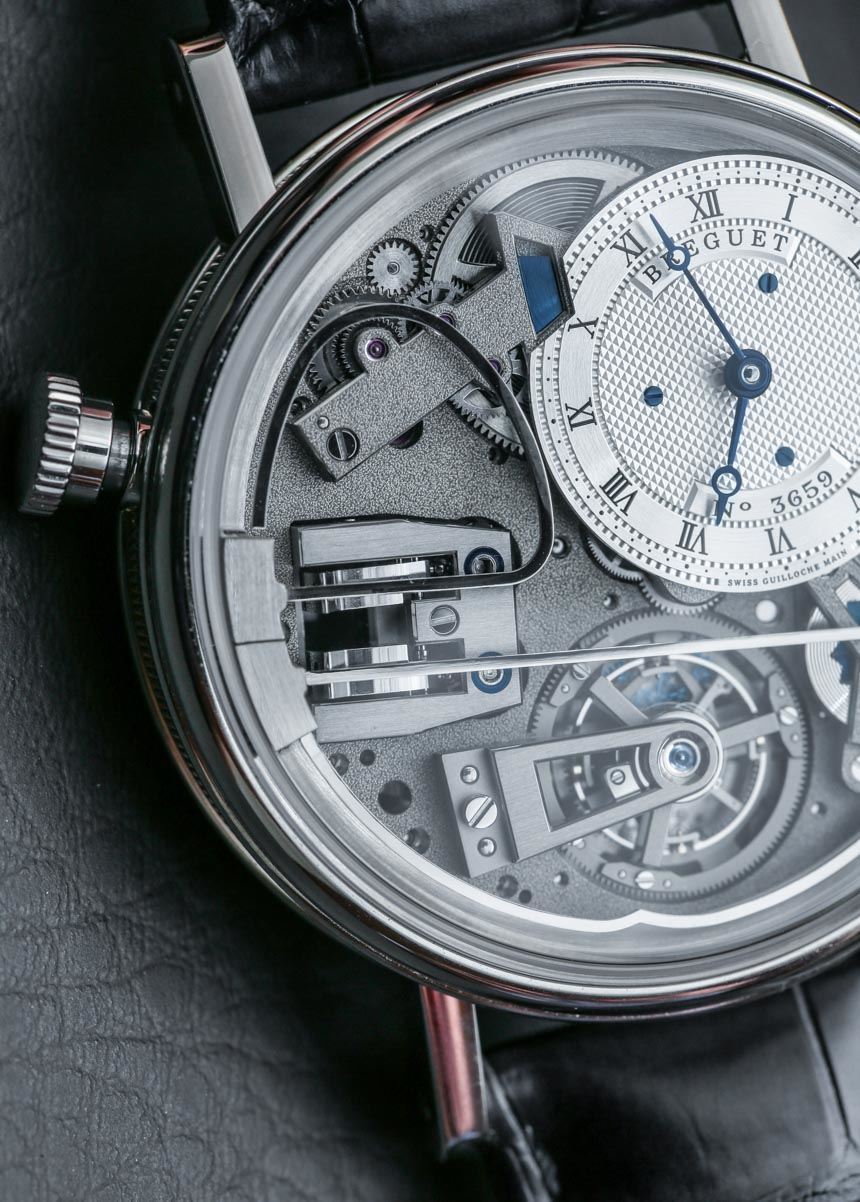 The true mark of a minute repeater is all in the tone of the chime. It must be crisp enough to spell out the exact time, but simultaneously pleasing – and never harsh. In this particular instance, Breguet watchmakers took a pretty unprecedented approach for the Breguet Tradition 7087 Minute Repeater Tourbillon’s symphonic design: by digitally simulating nearly a hundred thousand different chime sounds, and singling out those which were deemed to carry the most pleasing psychoacoustic criteria. Seriously. Rendering a uniquely original tone out of those thousands would then serve as the underlying basis for the materials and design of the watch itself. 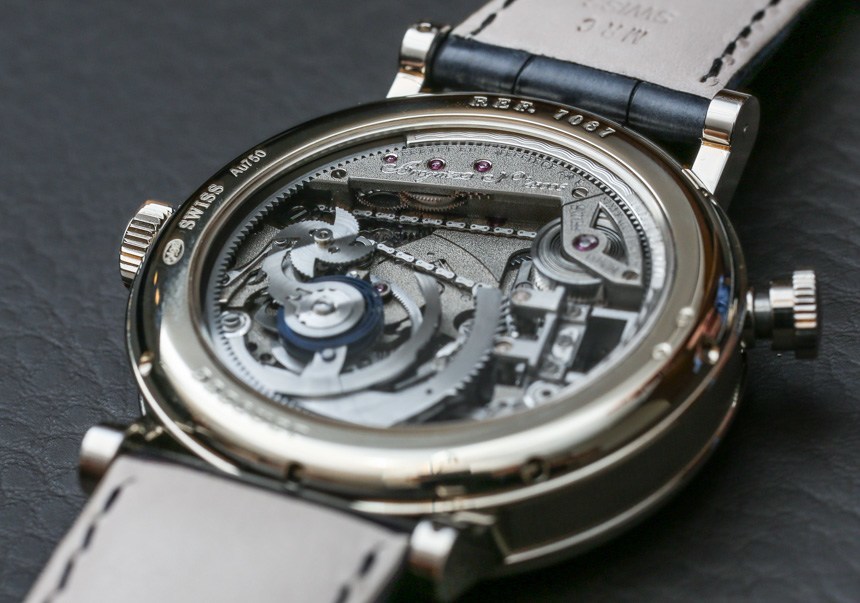 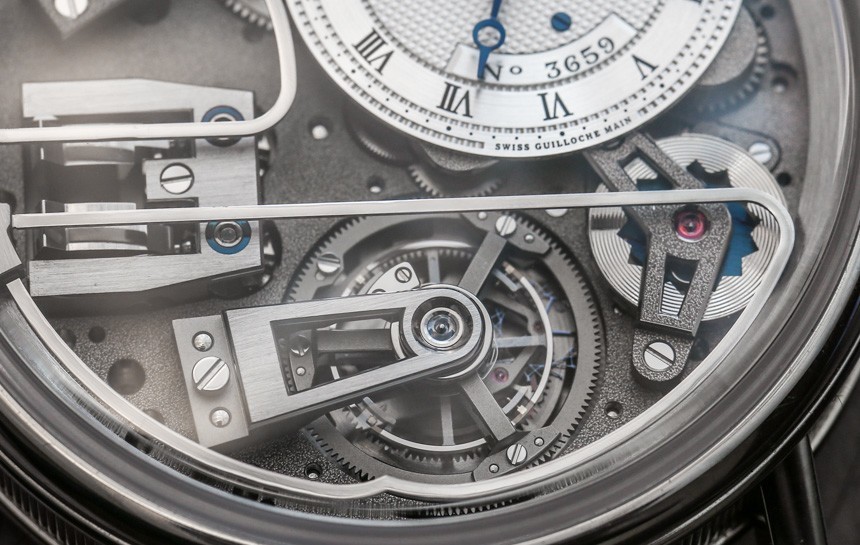 As the watch’s name indicates, the Breguet Tradition 7087 Minute Repeater Tourbillon isn’t just a minute repeater. There’s also a 60-second tourbillon complication at 6 o’clock – an inclusion which also makes sense, considering Abraham-Louis Breguet himself invented the tourbillon. This movement is delineated by the in-house caliber 565DR, an automatic movement with a platinum peripheral oscillating rotor and an 80-hour power reserve. The movement also exhibits a number of modern-meets-classic Breguet flourishes like titanium bridges based on antique Breguet models, silicon springs, and an inverted lateral lever escapement with silicon pallets – perfect examples of Breguet championing the very best technologies from two centuries of watchmaking. Take specific note that the presence of all that silicon makes Breguet’s exclusive magnetic strike governor technology possible – a unique solution that ensures the chime’s rhythm isn’t interrupted as the repeater’s barrel discharges. See, most repeaters employ some type of timing regulator within the gear train, but these components are usually guilty of emitting noise that would interfere with the repeater’s tone. 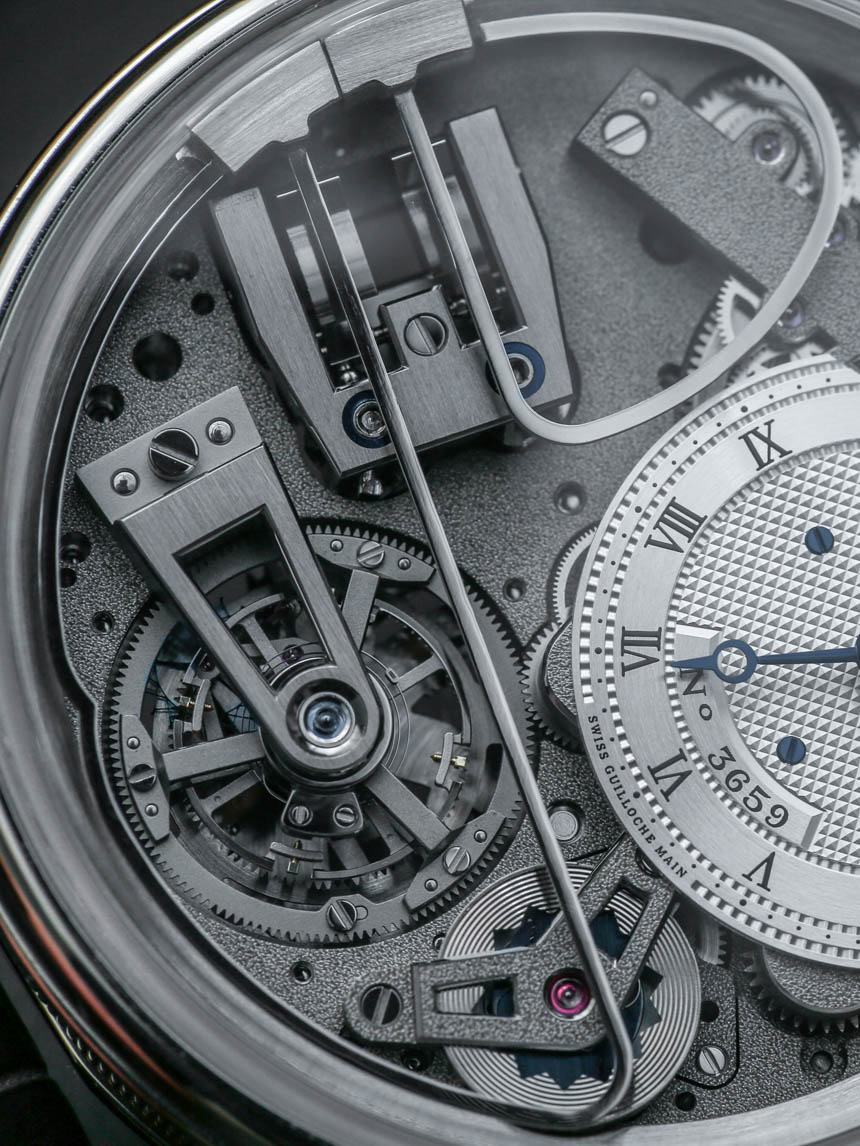 Breguet’s stealthy regulator is designed around a series of magnets that attract and repel the disks of the regulator at an even pace, maintaining a precise rhythm throughout the duration of the chime – which sounds just as Breguet engineers intended it to. When you break down the movement piece by piece, you’ll notice a unifying theme: every component plays a distinct role in either the transference of wanted sound, or the muting of unwanted sound. 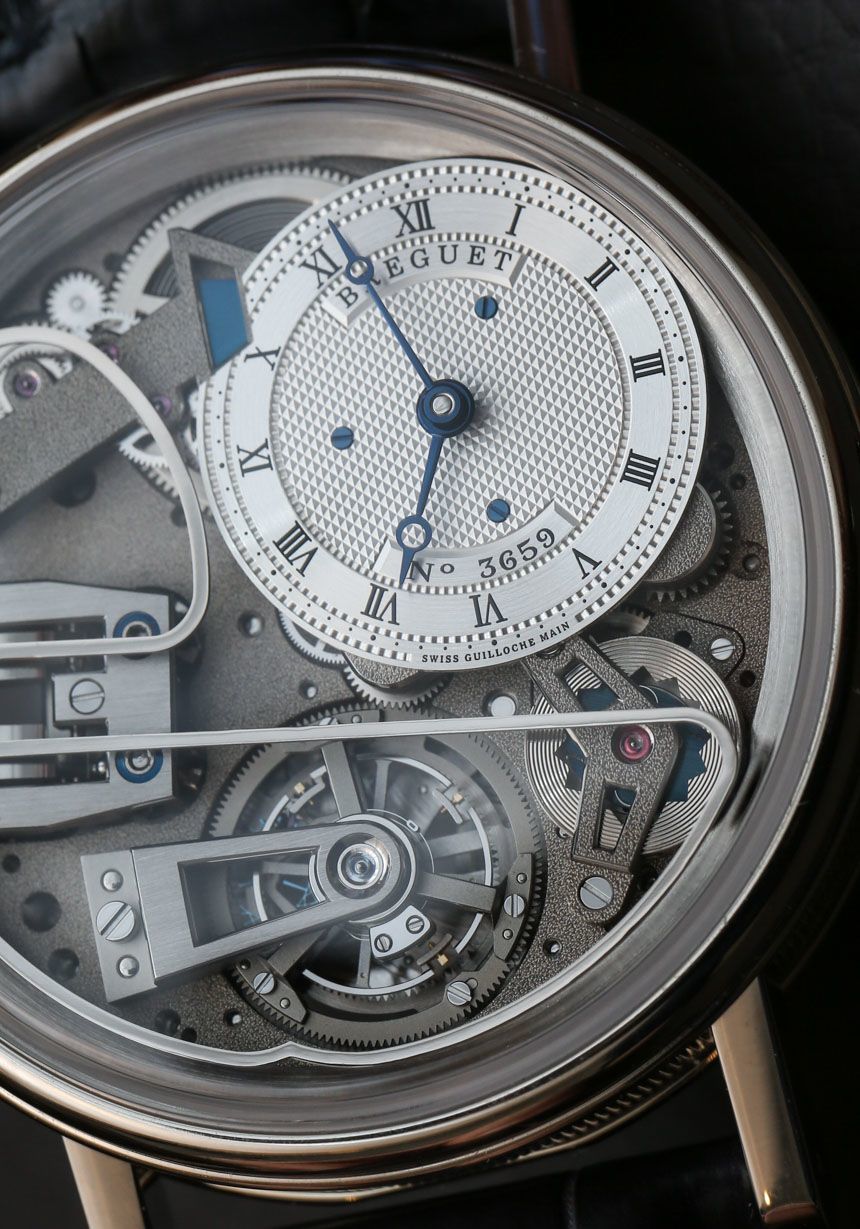 There’s an awful lot to look at on the Breguet Tradition 7087 Minute Repeater Tourbillon, but that’s because its watchmakers want you to see every bit of innovation that went into what is essentially a re-design of the minute repeater complication from the ground up. Initially, your attention is drawn from the fluted case to the engine-tuned 18-carat gold dial offset at 1:30, which remains plenty legible but leaves ample room for viewing the elements critical to the minute repeater. This starts with the two white gold gong springs (another Abraham-Louis Breguet invention) which bisect the dial and attach to the bezel itself to optimize the transmission of vibrations at a wider frequency range. Even the hammers striking the gongs are of their own design, striking perpendicular to the movement rather than parallel, which more efficiently yields the transference of energy to sound. 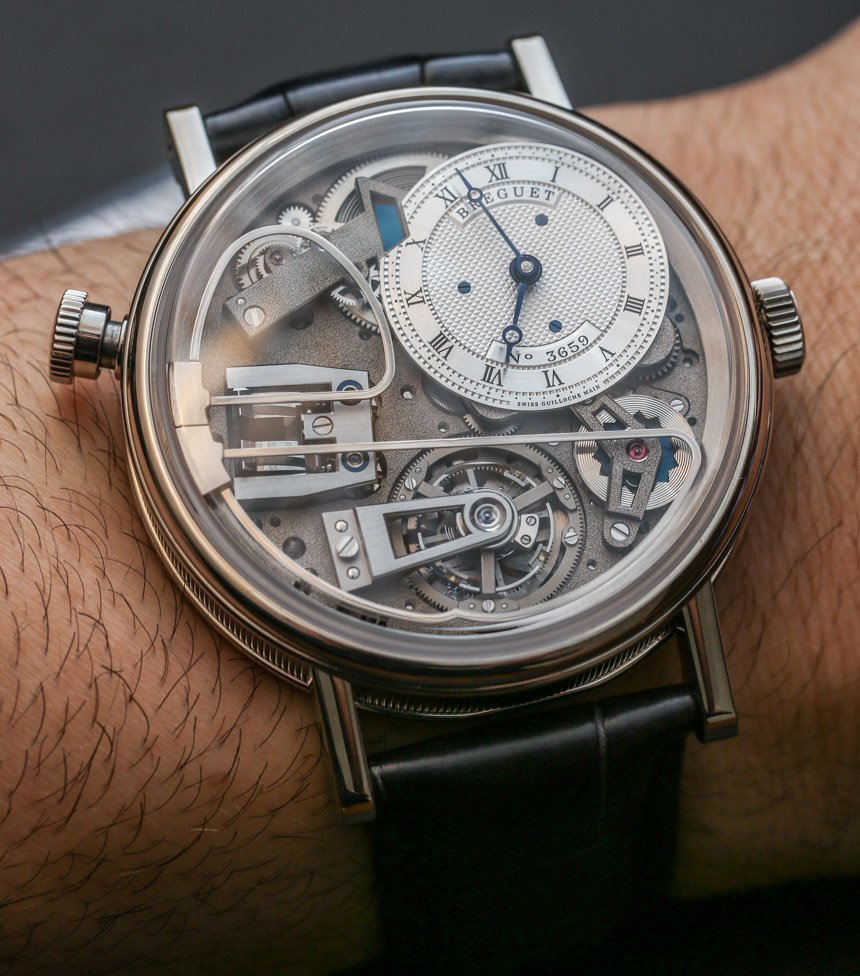 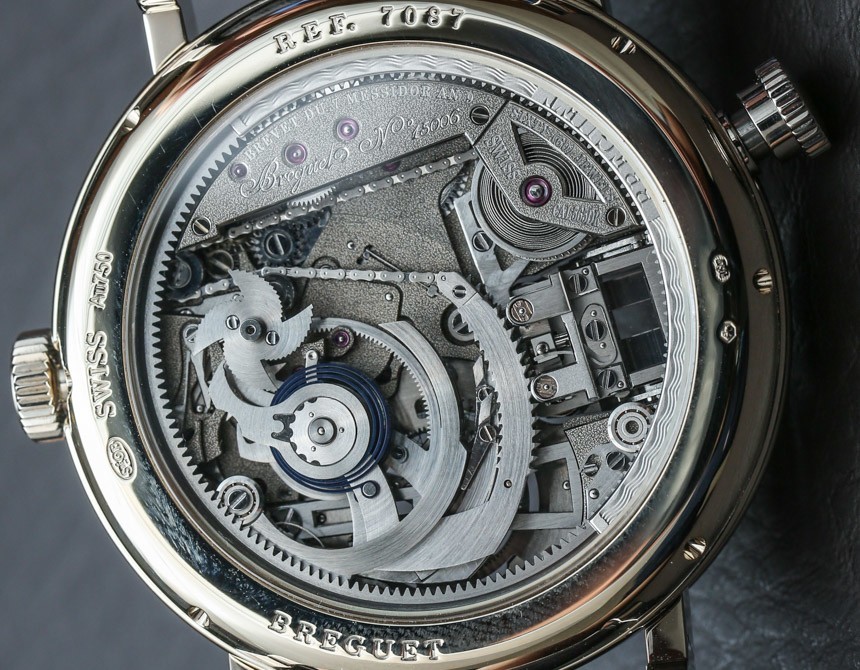 All of this is visible through sapphire crystals front and back – the latter of which also houses one more innovation designed to deliver the best acoustics with each gong strike: a gold membrane which vibrates the air in the acoustic cavity between itself and the caseback, increasing the volume of the chime while muting sounds from the movement itself. That’s largely what makes the watch so interesting to behold – every single detail, both visible and invisible (and there really aren’t many invisible ones, frankly) is all part of Breguet’s obsession with delivering desired acoustics with each actuation of the chronograph-style bayonet pusher at 10:00. Speaking of which, this is another particularly neat detail which, like the bridges and transmission chain (which diffuses stress on the movement with each activation) hail the design of Breguet’s antique pocket minute repeaters. Oddly enough, despite being an antique detail, it still adds a subtle, decidedly modern flourish to an otherwise extremely traditional complication. 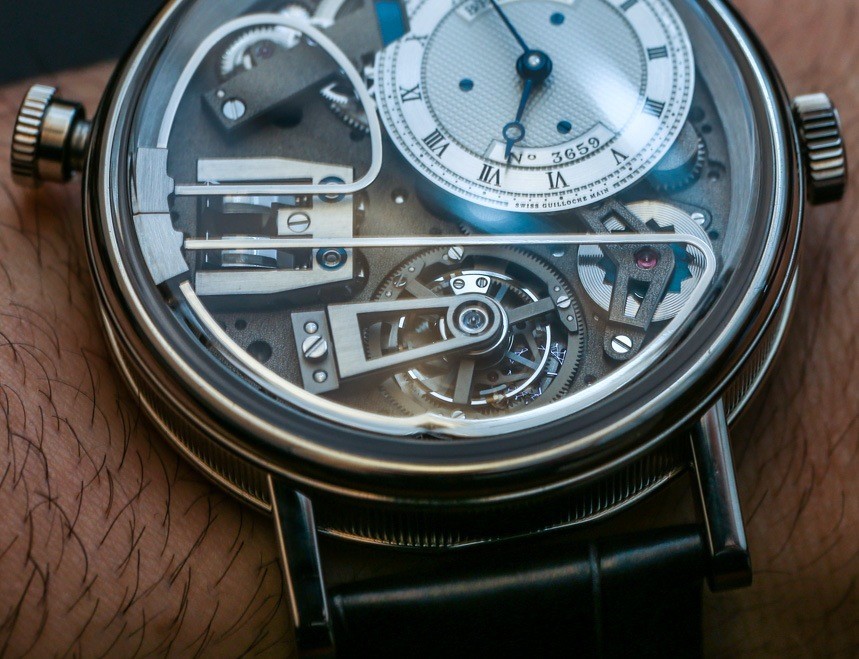 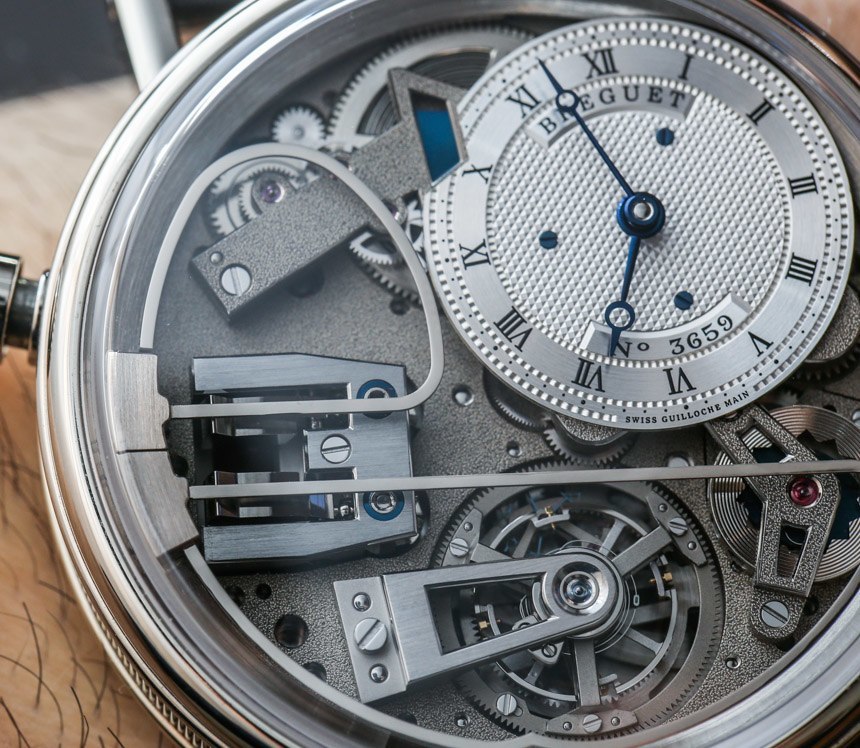 The Breguet Tradition 7087 Minute Repeater Tourbillon certainly makes good on every millimeter of its 44mm diameter, but in the 18k rose gold variant that we tried, it remains surprisingly wearable, though it’s hardly subtle. Fully skeletonized watches are usually a polarizing lot, but maybe Breguet gets a pass here, seeing as everything within this watch was purpose-built for delivering an ultra-specific acoustic experience. Even the cool contrasting gray titanium notes in the baseplate and bridges were purposefully employed to dampen movement noises, despite the difficulty of working with the material at this scale. Rightfully so, Breguet wants to give you the means to view how their watchmakers accomplished all this. And here, the means to view it includes applications like the acoustic membrane and the peripheral oscillating rotor – both of which give you a less obstructed view of the movement. 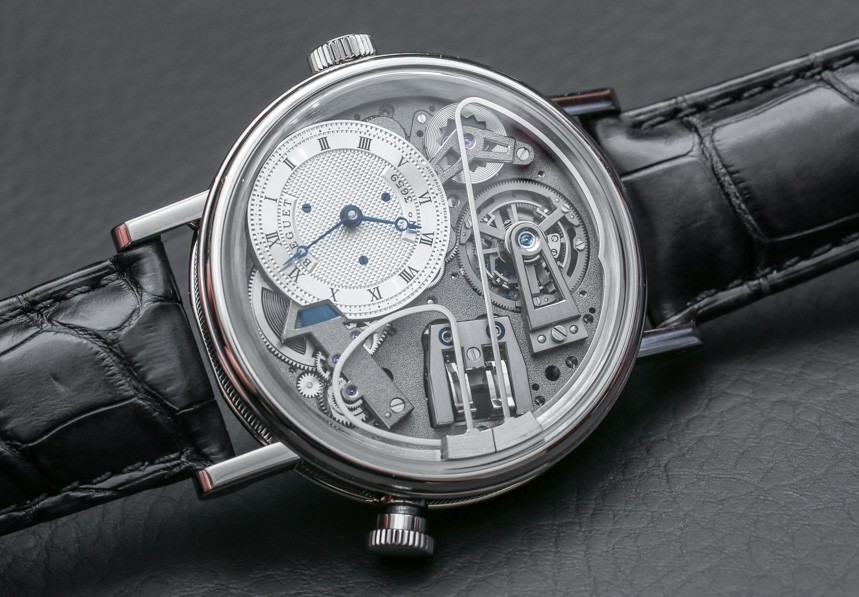 At the end of the day, there are certainly more economical ways to get Breguet’s signature blued hands on your wrist (case in point: Breguet’s Classique collection), but that’s beside the point. The Breguet Tradition 7087 Minute Repeater Tourbillon is reserved for the serious watch lover, who also happens to be an audiophile who appreciates the history and technical artistry that goes into the clarity of sound in a watch of this caliber, and wants to be able to see it firsthand. But most importantly, it’s Breguet’s singular obsession with engineering that perfect sound and the tasteful means to view it in action that make this a rare option, with exceedingly limited competition. Options like the Girard-Perregaux Minute Repeater Tourbillon come to mind, but what that watch delivers in symmetry, it arguably lacks in the contrast, legibility, and technical prowess of the Breguet. Hence, it could be argued that the asking price for both the 18k rose and white gold variants of the Breguet Tradition 7087 Minute Repeater Tourbillon is hardly unreasonable at 450,000 Swiss francs. breguet.com