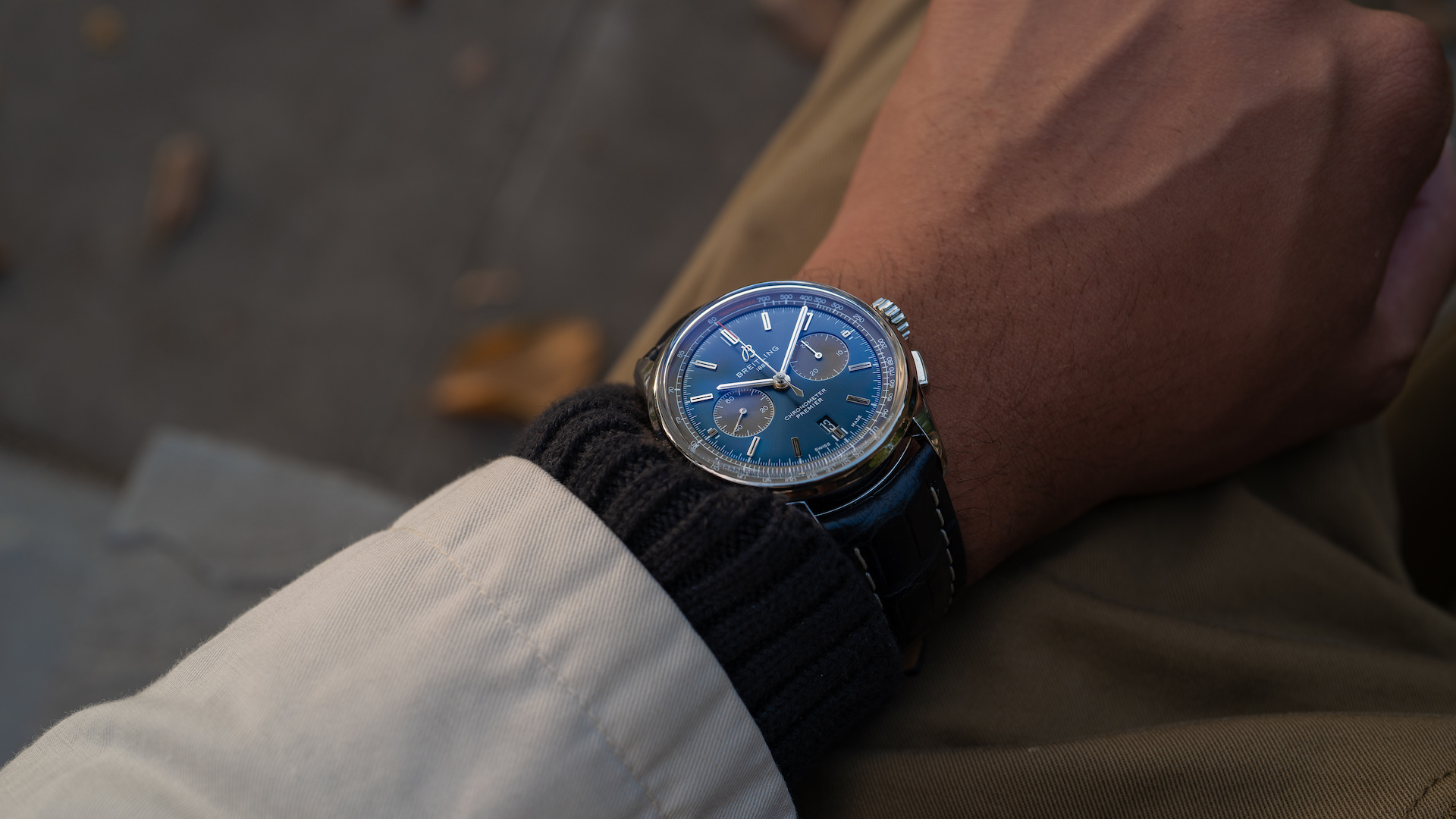 The Breitling Premier B01 Chronograph 42 is versatile, remarkably well finished to the point that it punches above its weight, and a welcome addition to an underserved category of dressy chronographs. I spent quite a bit of time with the blue dial variant and it was as natural a fit when I was wearing a Fred Perry polo and a pair of Birddogs as it was when I attended a wedding in a tan Gucci suit. If you’re a person who depends on your watch for a personality, then this likely isn’t the watch for you. Rather, the Breitling Premier B01 Chronograph 42 is the final touch that underscores a subtle point.

The Breitling Premier B01 Chronograph 42 brings exceptional finishing, thoughtful proportions, handsomely versatile design, and an in-house movement to the table for a price of $8,500. That’s a lot of value, and Breitling has continually exceeded my expectations for the past two years. 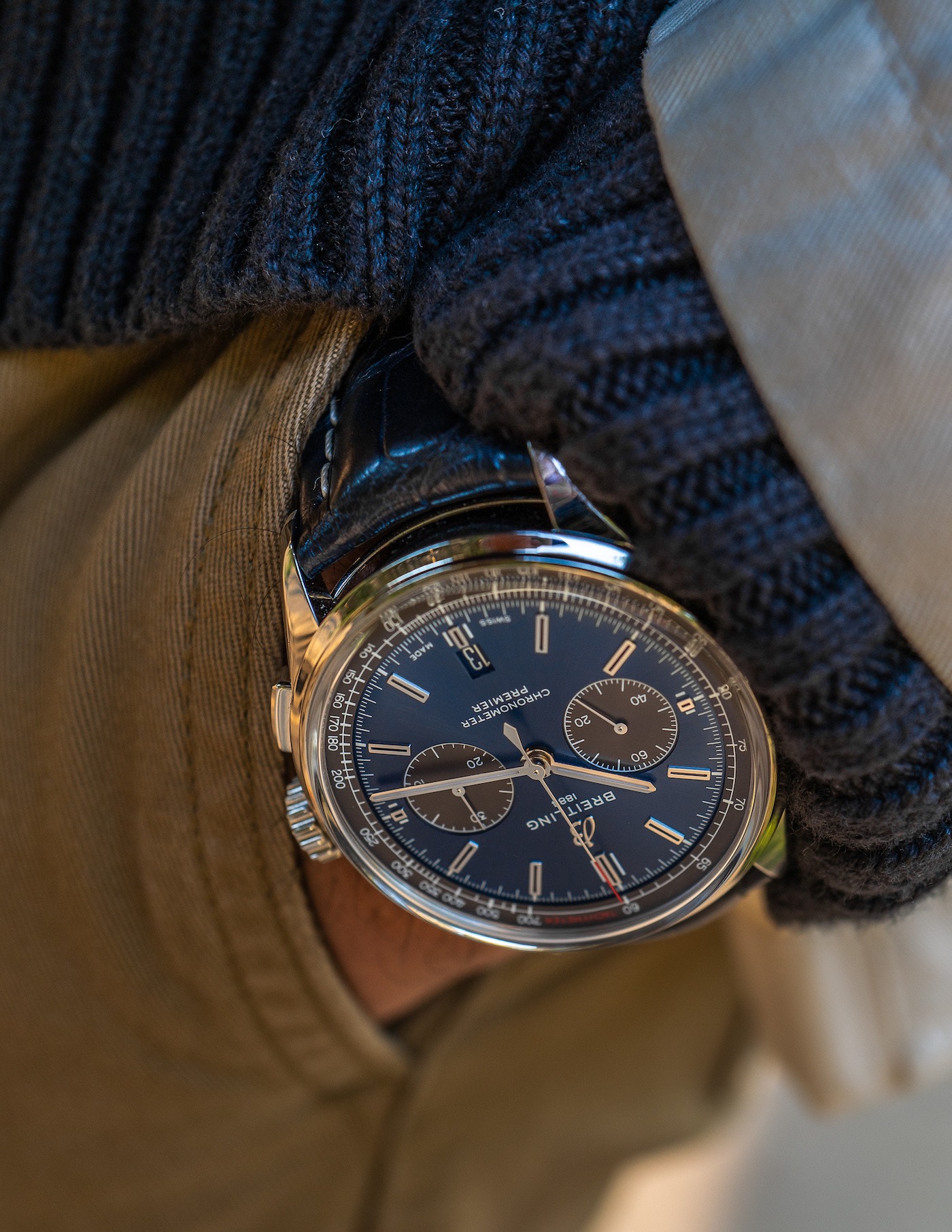 My admiration for Georges Kern-era Breitling is no secret, at this point, but I was a little anxious at the initial release of the Premier Collection. The photos made the watch look a little too safe and conservative, and while that remained largely true in the weeks I’ve worn the watch, I have found myself not using either of those descriptors as a pejorative. The history of modern chronographs from Breitling is a long and elaborate one, with a lot of strong personalities involved. Between the Chronomat and Navitimer alone, let alone others, there is a lot of expectation that comes along with being a chronograph from Breitling. 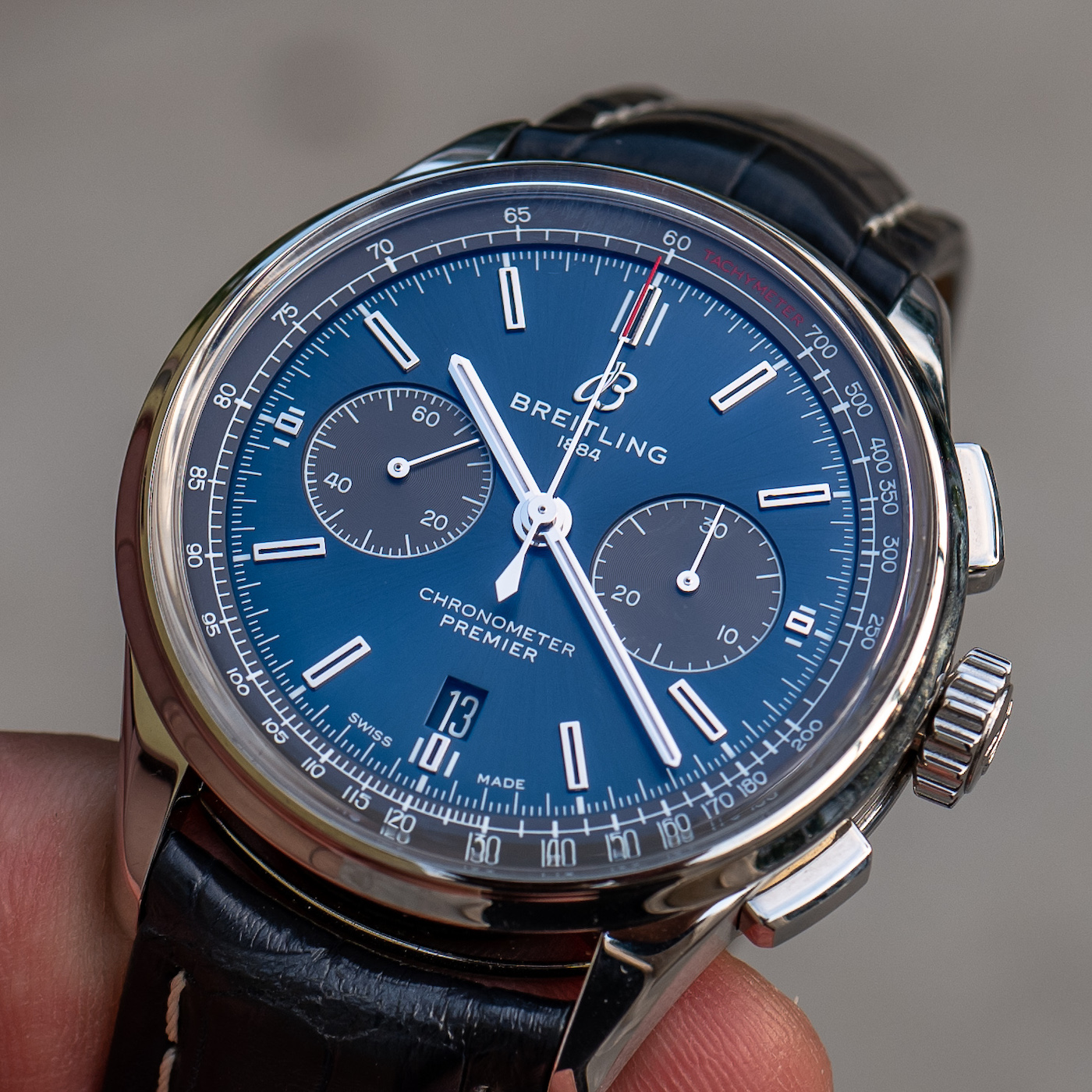 The Premier B01 Chronograph 42 was an exercise in the importance of restraint in design, understanding proportions, and finish quality. The result is one of the most balanced pieces Breitling has ever made. The Premier B01 Chronograph falls within the “vintage-inspired” Premier collection, but I actually don’t really feel beholden to that general parlance. Rather, it’s a watch I’d see on Don Draper’s wrist — the closest I can get to nailing down its identity. I think it is intentionally designed and marketed to underscore the personality and style of the wearer, rather than try to add personality and style to the wearer. 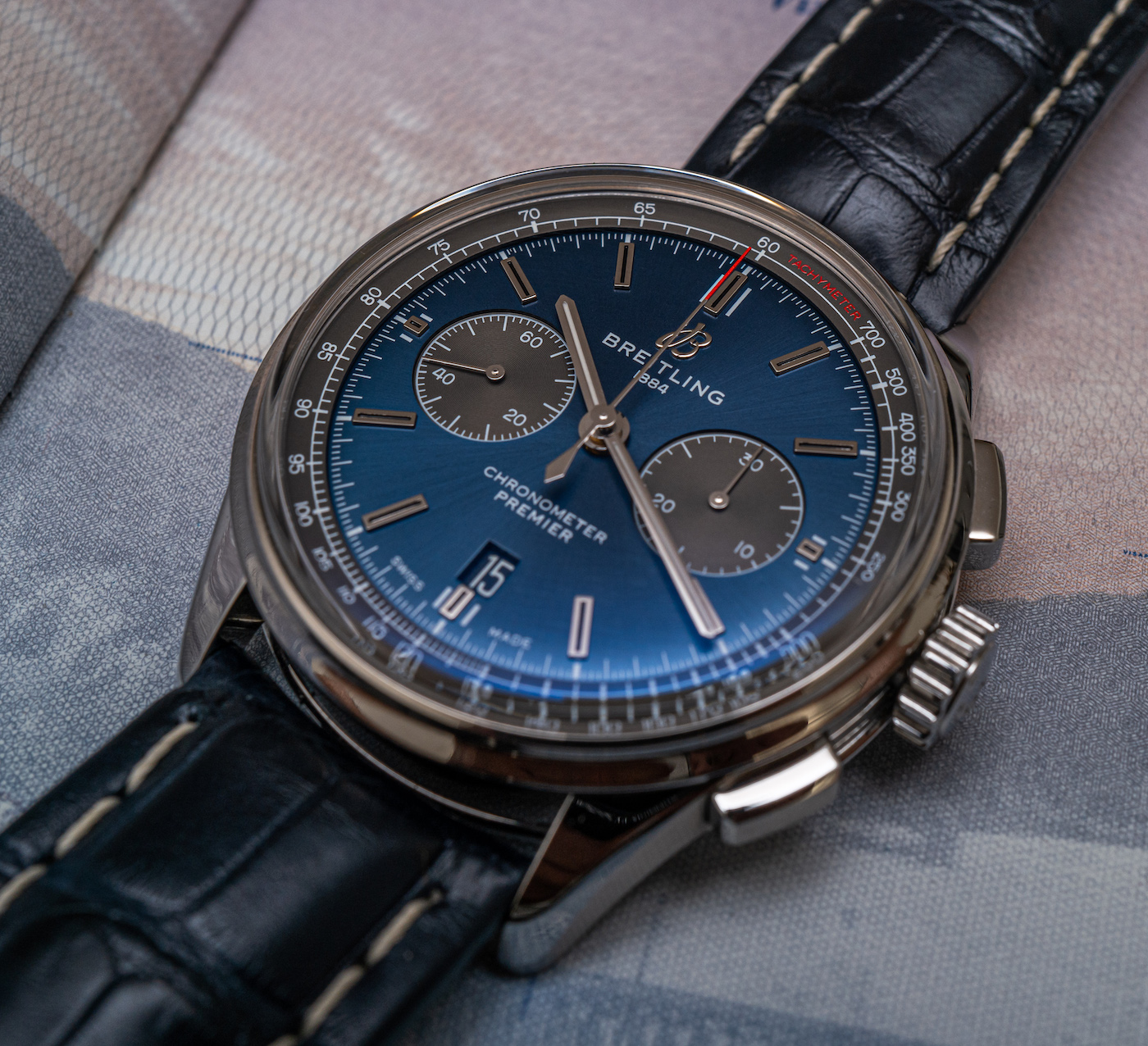 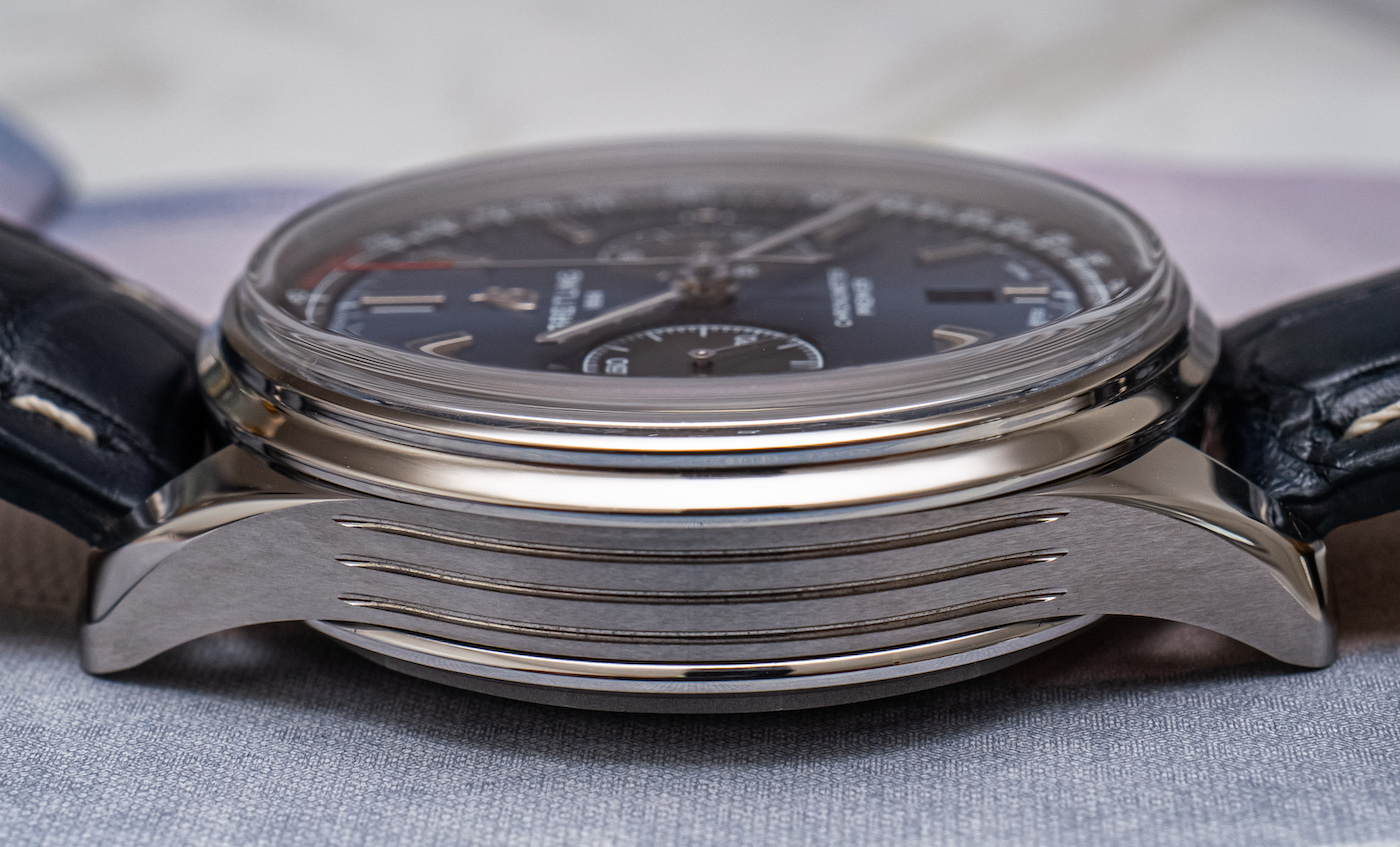 It’s all about case finish, design, and proportions with an impressive in-house movement from Breitling. The model I chose to wear is the blue dial with blue alligator strap, though there are several varieties like the panda dial, gray and black, and that green-dialed Bentley edition that I love so much. 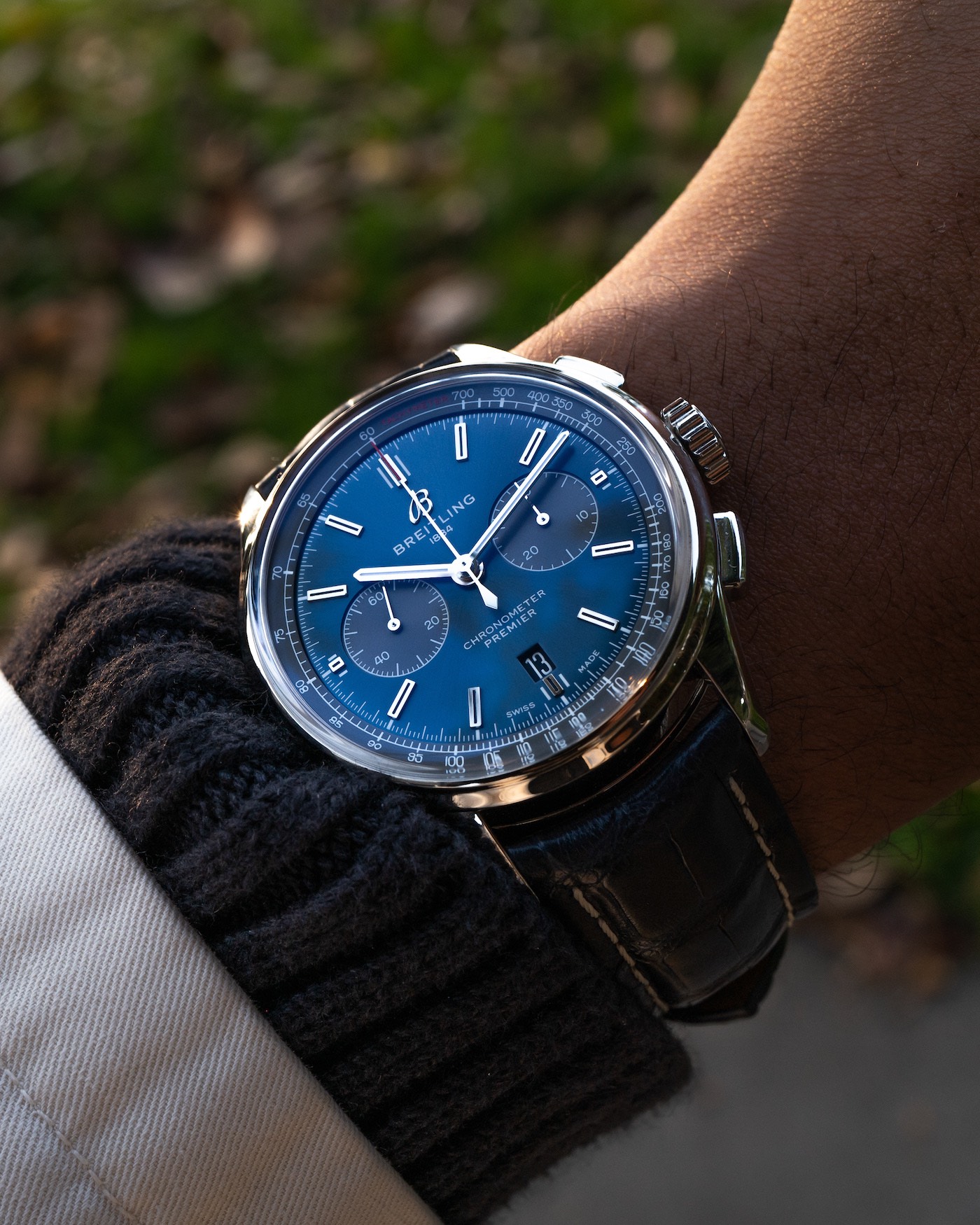 Measuring 42mm-wide and 13.65mm-thick with a lug-to-lug measurement that is a hair shy of 50mm (I believe technically closer to 49.95mm), the case is water resistant to an impressive 100M. When organizing my thoughts on this watch, I remembered what our David Bredan said about the bezel and case profile when the watch was first released. He wrote then:

Subtle, integrated pushers and the smart, multi-step steel bezel make for an unobtrusive chronograph. The Premier hides its heft and thickness extremely well, thanks to that low case profile and the polished bezel that narrows quickly and in multiple steps. It is only now, that I’m looking at this photo above that I realize how intricate and unique that design is. This is precisely the sort of stuff that one should absolutely expect from watches that cost not $4k but double that – manufacturing and finishing this bezel must be a pain compared an ordinary one. The lugs are cut off at a steep angle; Guy worked his magic at cutting these down to a length that makes the case wearable for those with smaller sized wrists. 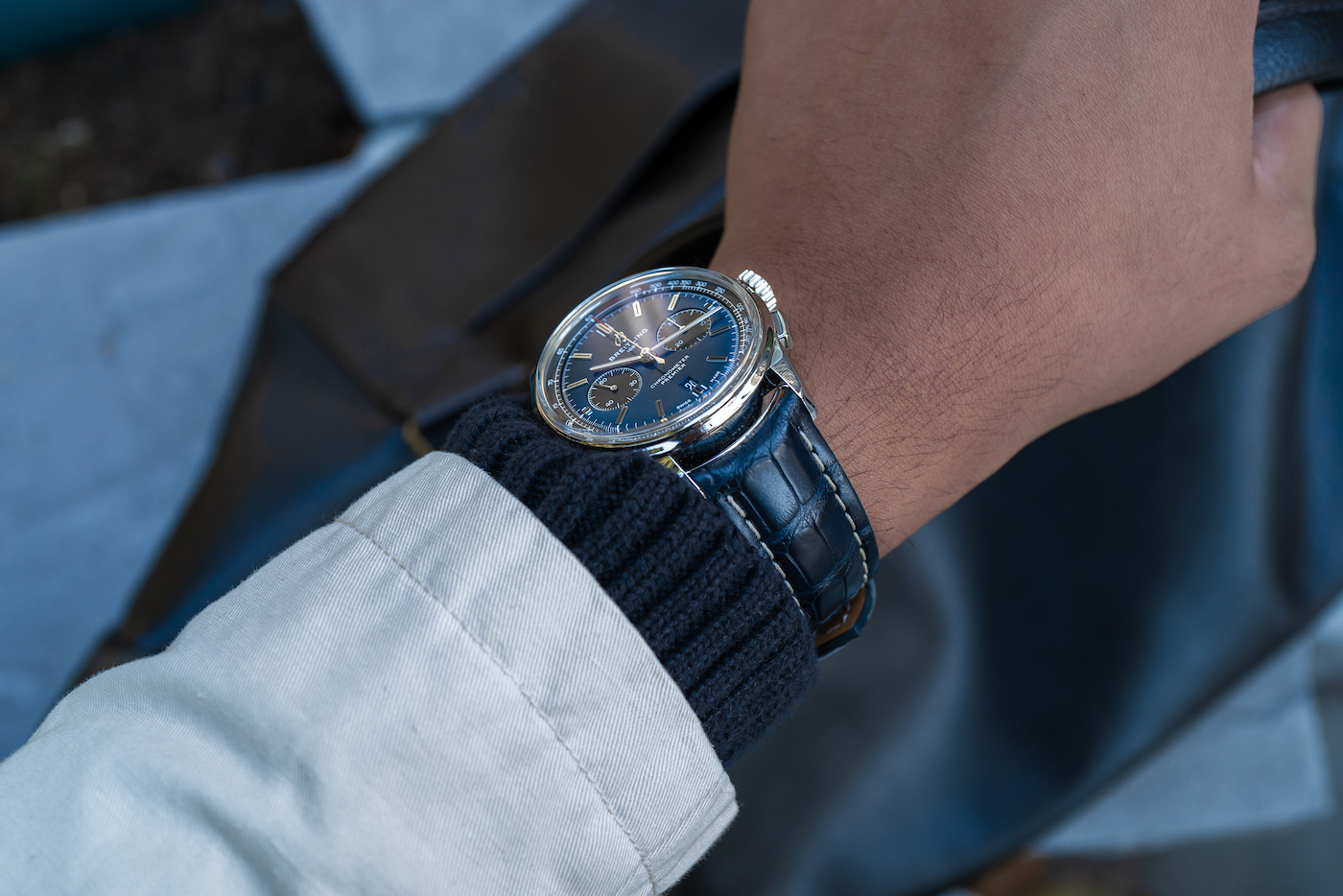 Having spent so much time with the Premier B01 Chronograph, I can attest to all of this being not just accurate but what makes the watch so appealing. None of these finishes and design decisions are unique in contemporary watches, but few peers in this price ~$8,500 category attempt, let alone accomplish. 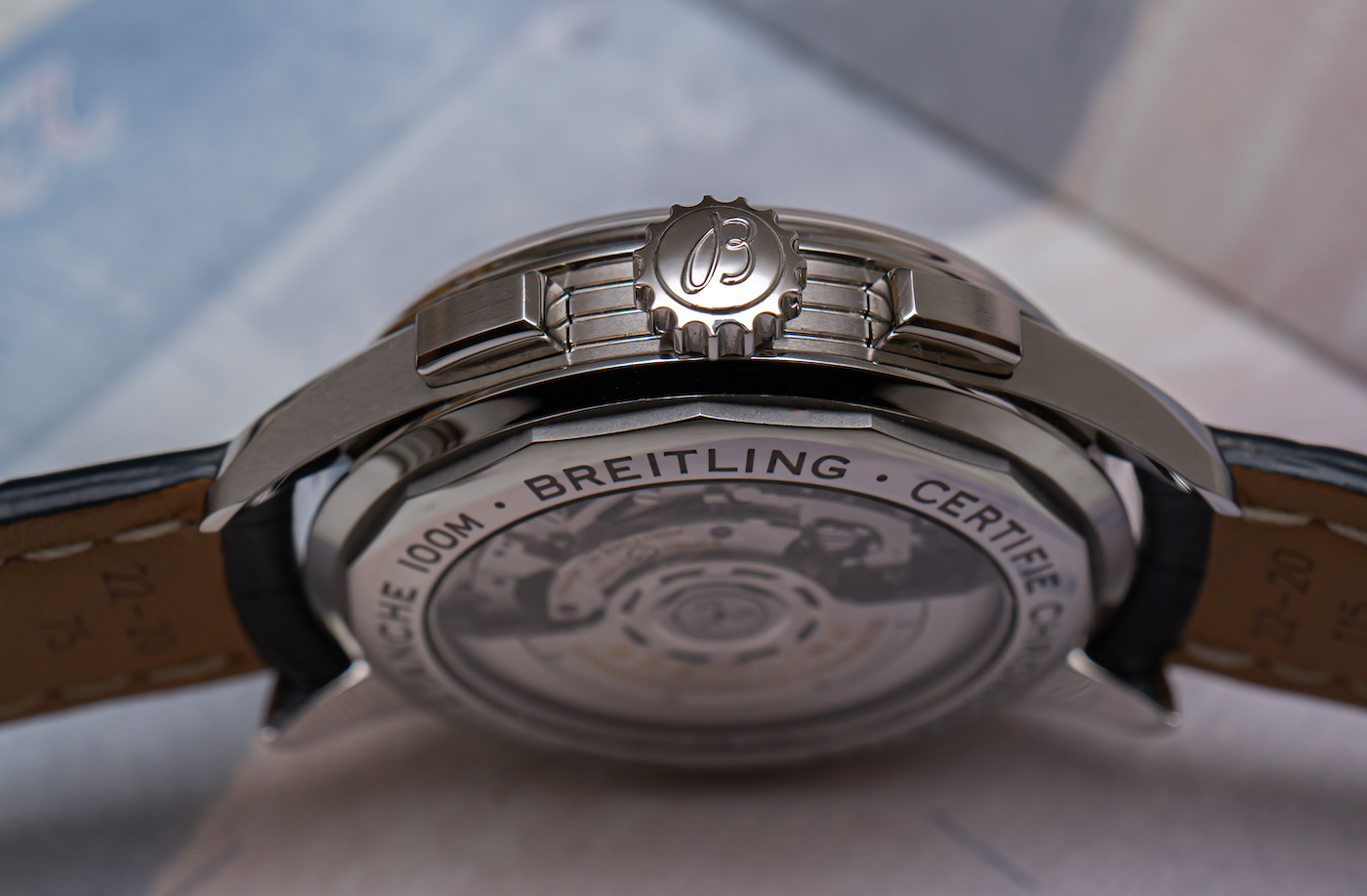 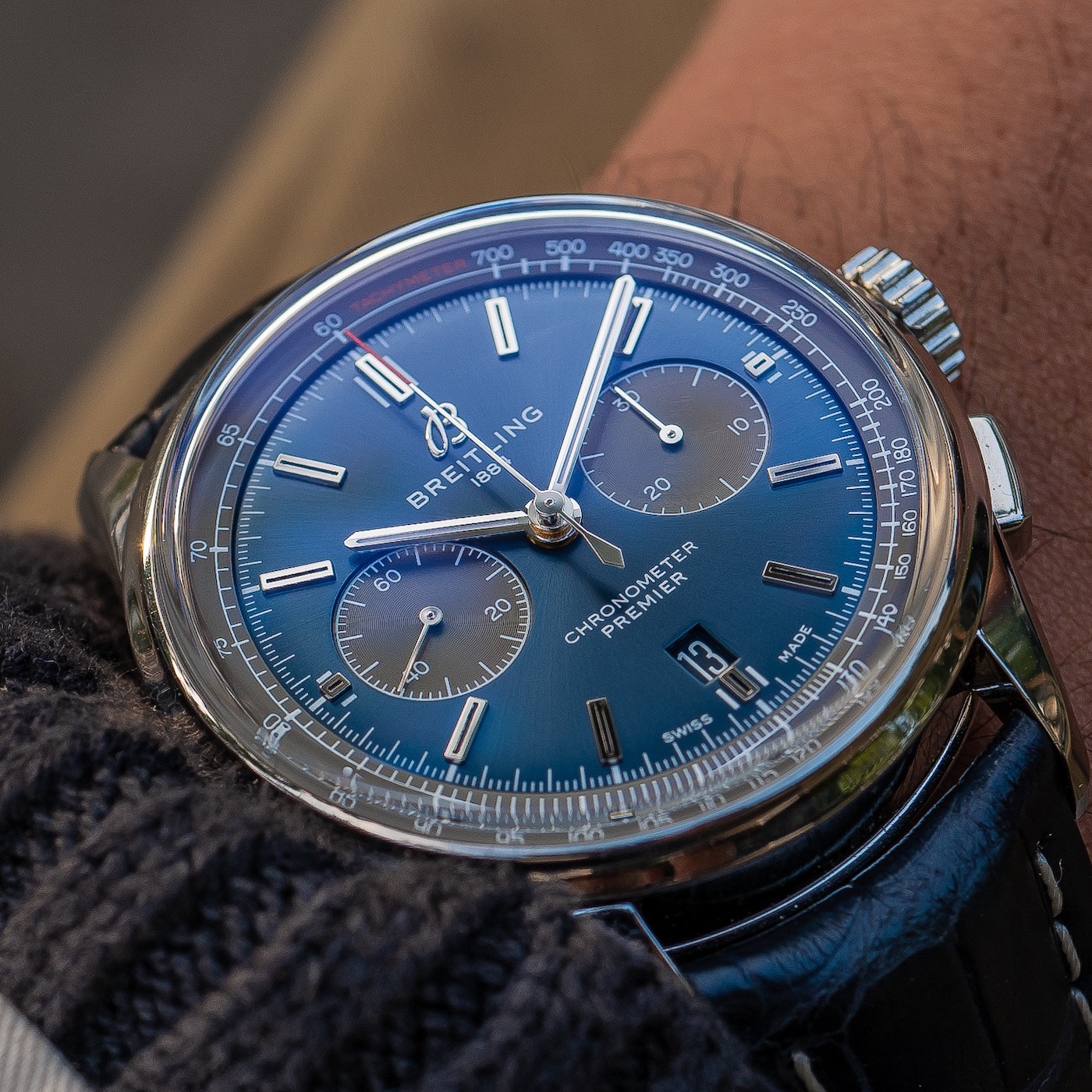 It’s the little things that make a cohesive final product stand out, and the crown on this watch is one of those things. The crown has distinctly large and deep knurling that I could immediately tell was made for modern-sized fingers. So many watches force me to have to almost pinch the crown when using it, making me feel like I’m setting a child’s toy. Not here, though. Also, the crown is thankfully not screw-down and is simple enough to operate. One pull of the crown sets the date and another pull sets the time. The date aperture and hands are responsive and don’t suffer from the oversensitivity and jumpiness that too many others do.

I was not surprised to later learn that Breitling created this crown specifically for the Premier B01 Chronograph — it absolutely shows. Again, it’s a level of thoughtfulness and attention to detail that you don’t often see from brands of this size. 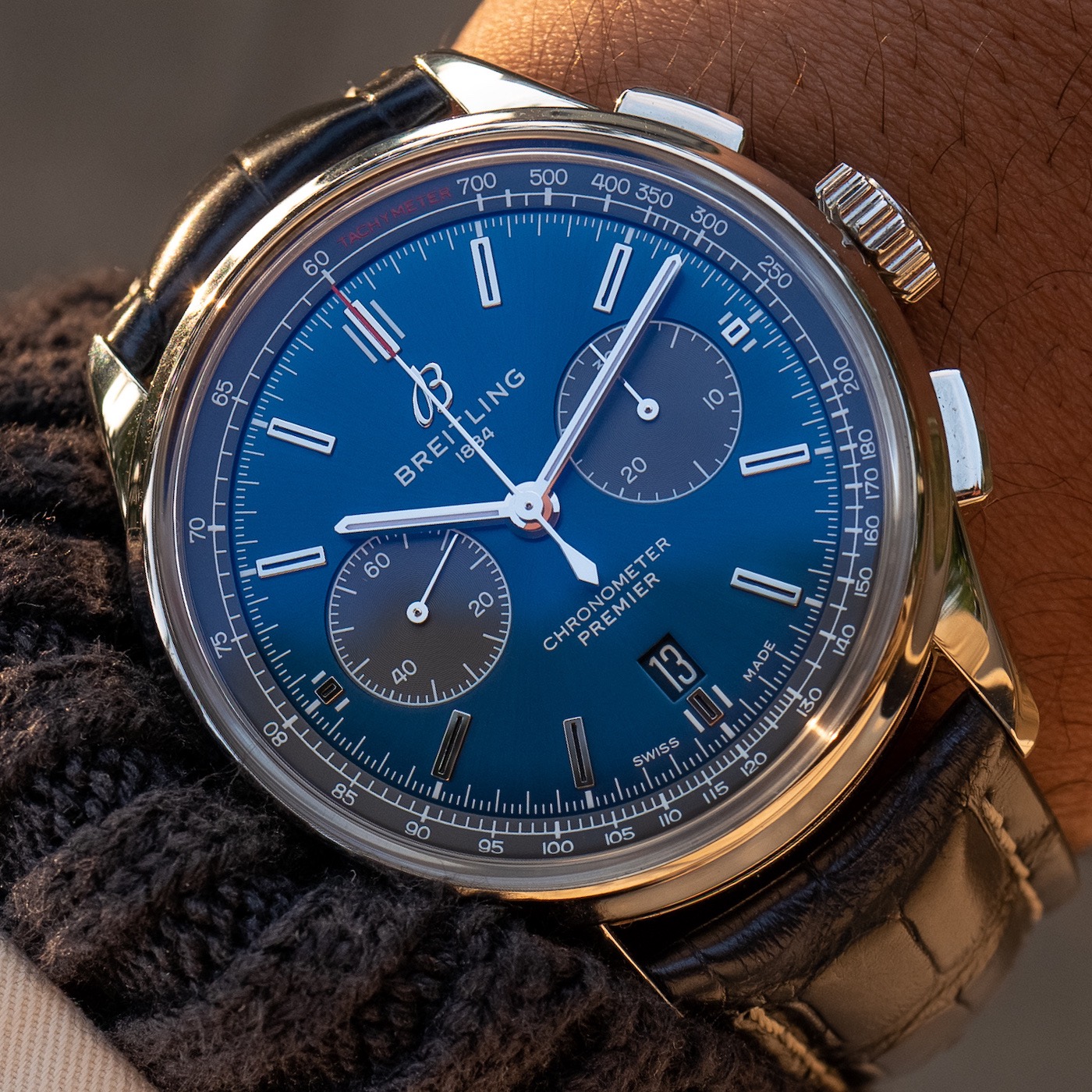 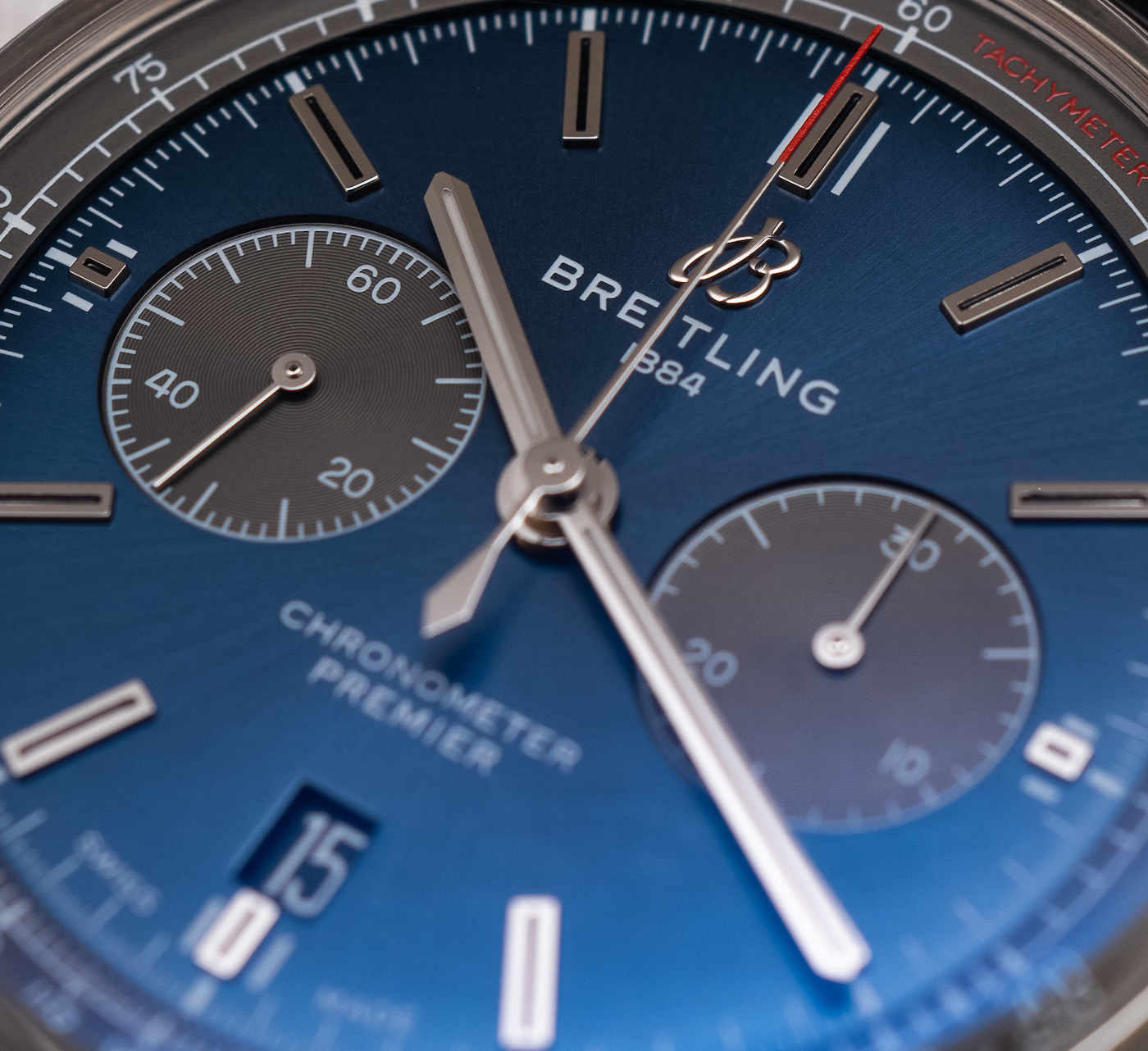 Seeing two color tones (blue and gray, in this case) on a Breitling dial is an indication that it houses one of the brand’s in-house movements. Visible through the exhibition caseback is the Breitling Manufacture Calibre 01 movement, also known as the B01 for short. Introduced just about a decade ago now, the COSC-certified B01 was Breitling’s first in-house chronograph movement and is now considered the gold standard for contemporary chronograph movements both among its price bracket as well as a bracket above. 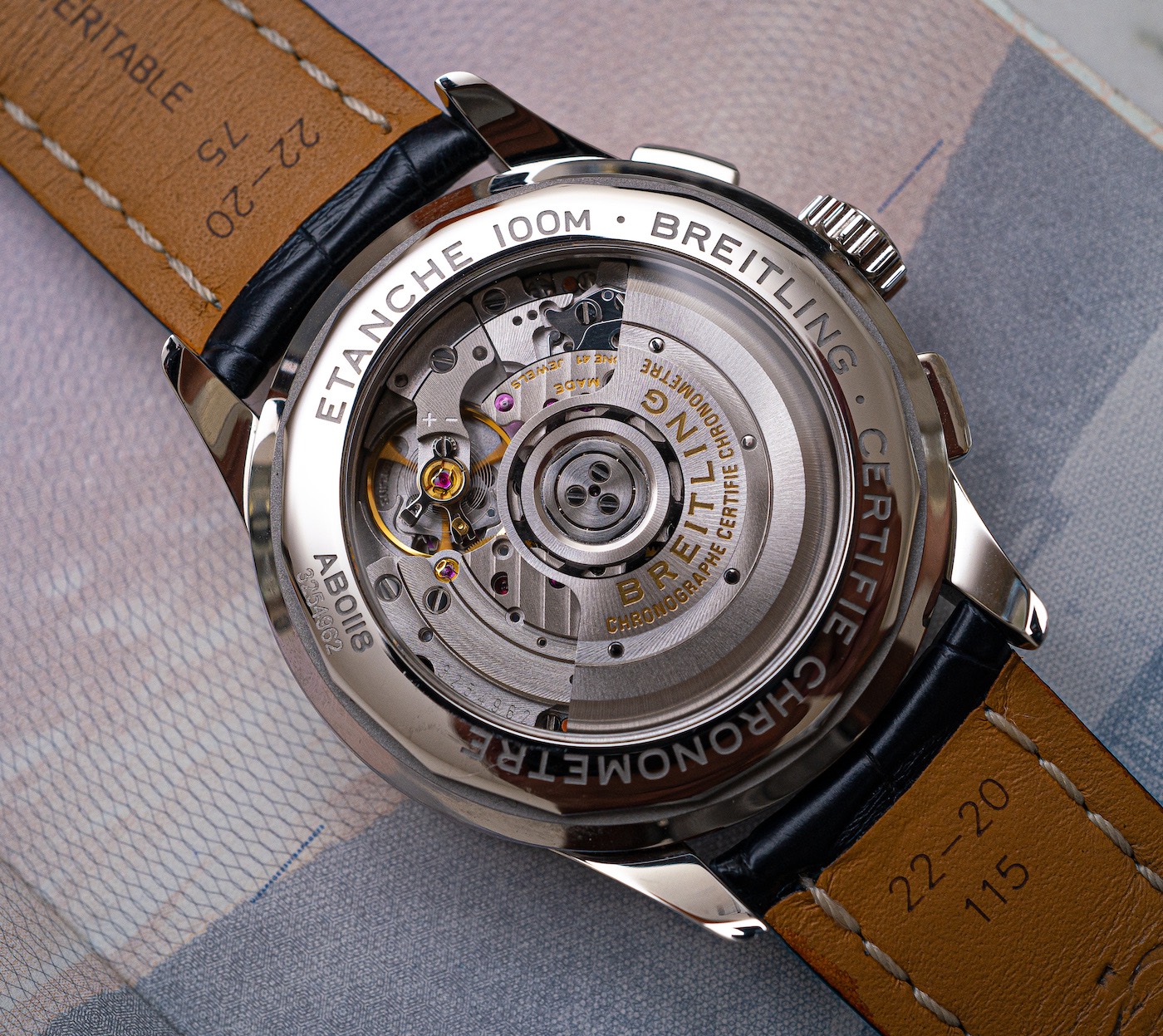 Featuring a column wheel and vertical clutch, the B01 chronograph operates smoothly and is designed to last (Breitling offered a five-year warranty way before many peers did). As trite as it may sound, pushing the rectangular pushers is so satisfying on a tactile level. Seriously, if you find yourself passing by a Breitling boutique and have some time on your hands, go and check it out in person. It’s nothing new or innovative, but the feel of the pusher and the engaging of the column wheel here really is a masterclass in what a modern chronograph should offer. 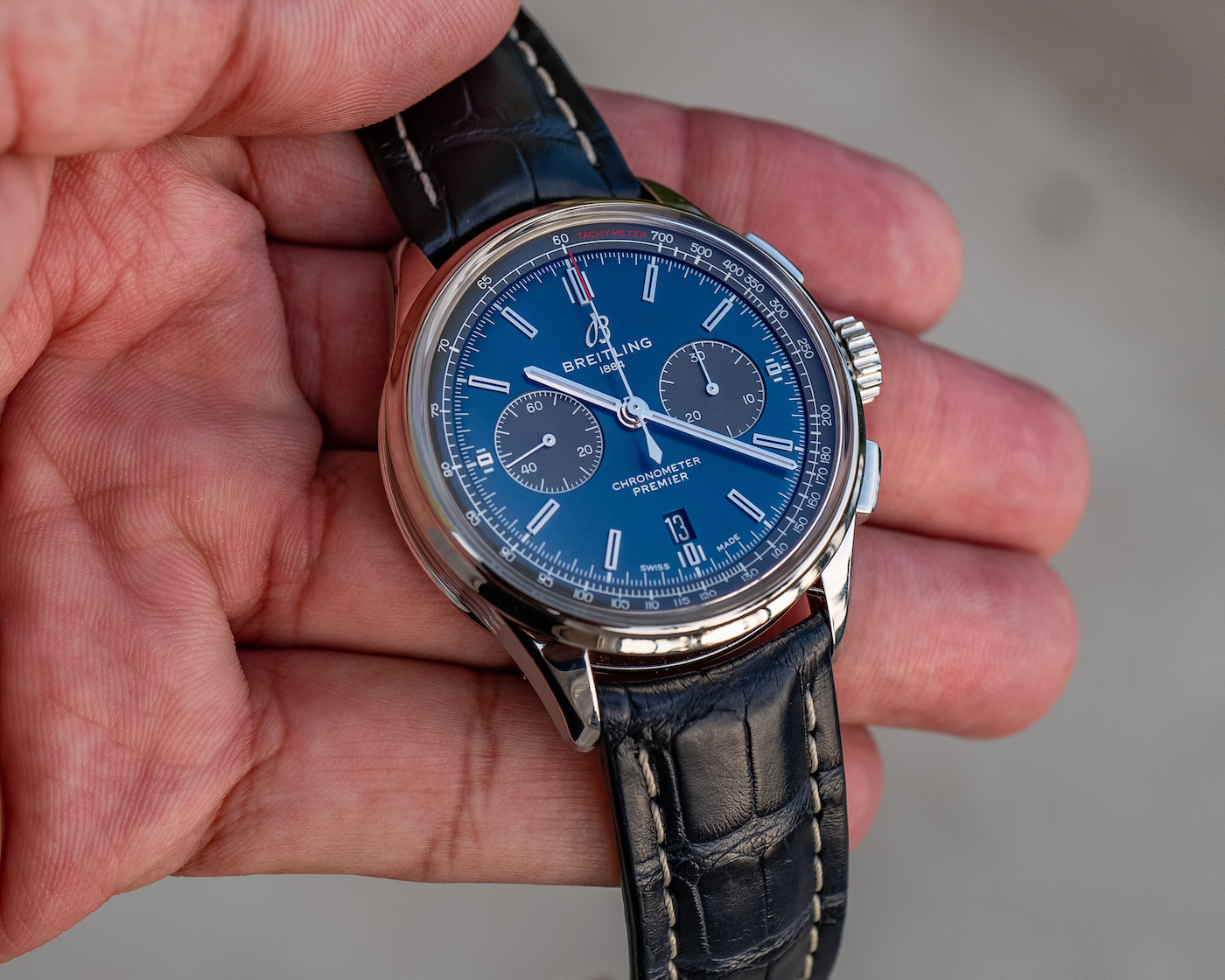 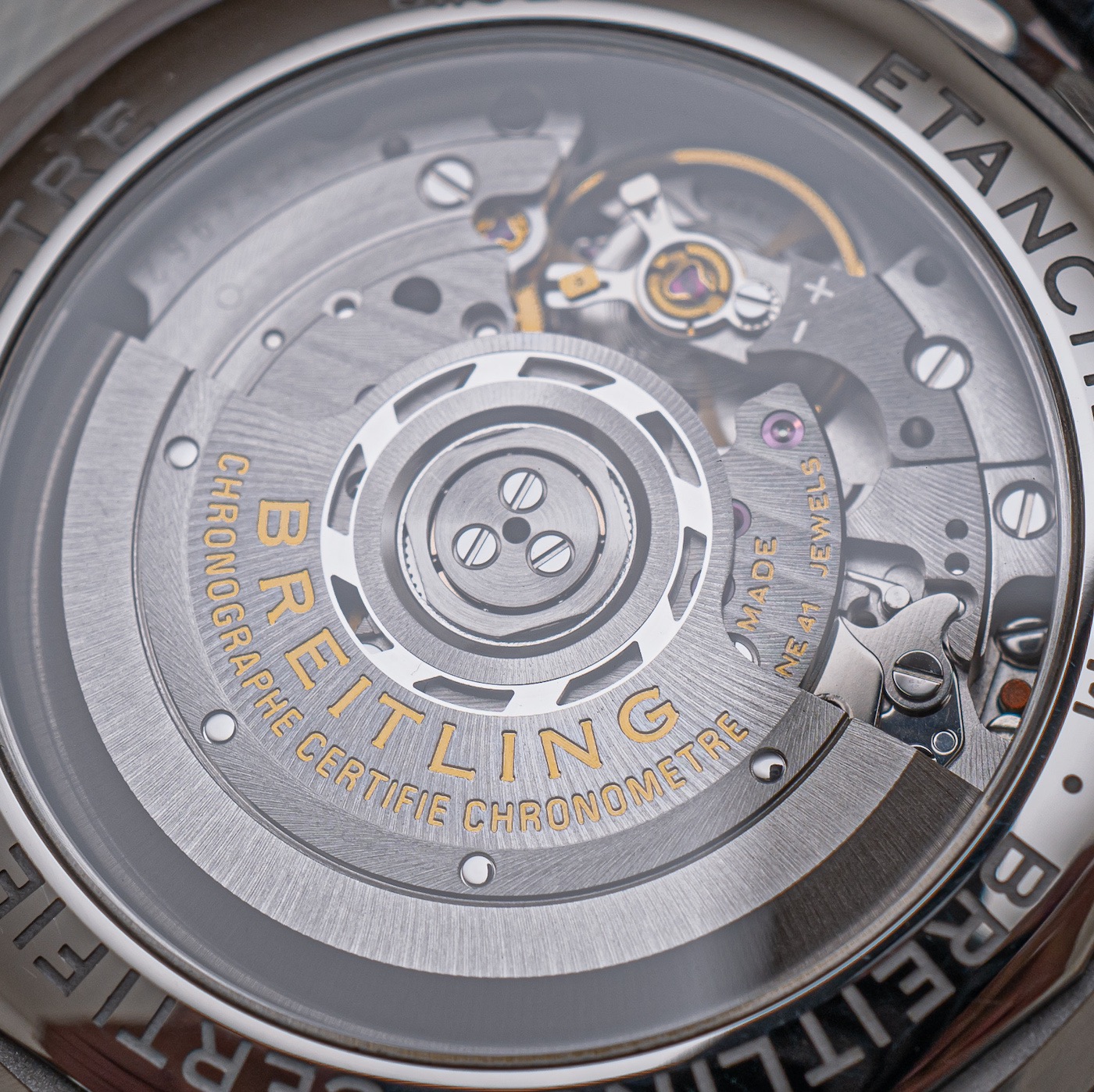 Beyond the chronograph functions, the B01 also has a hacking seconds mechanism as well as quick-set date. Made of 346 components including 47 jewels, the B01 operates at 28,800 vph (4Hz) and has a 70-hour power reserve. It’s an ideal chronograph movement that ranks up there among the best in the industry. 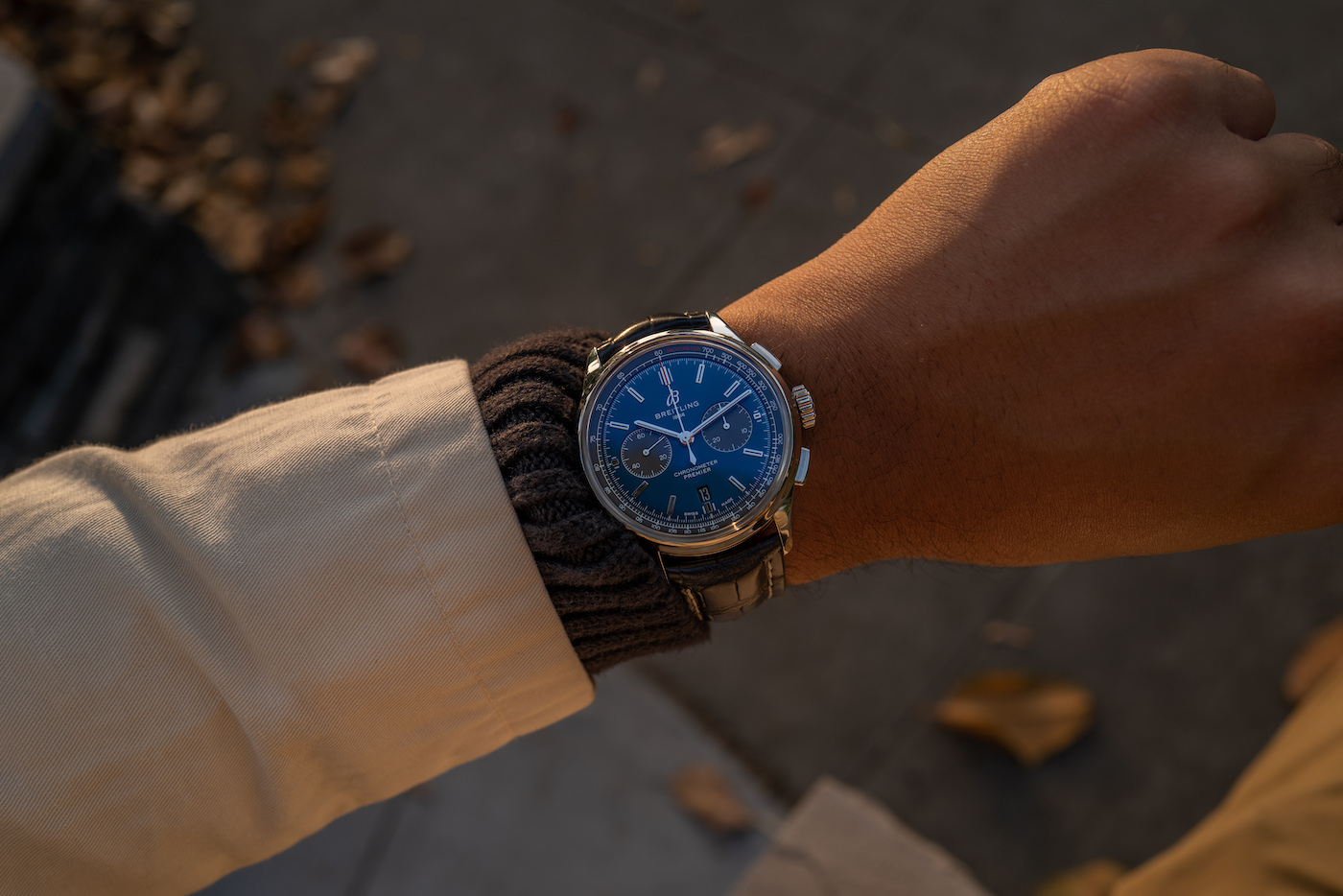 The landscape of true competitors of the Breitling Premier B01 Chronograph 42 isn’t very broad, but there are certainly some notable peers. The Omega Speedmaster ’57 (around $9,000) comes to mind with its 41.5mm-wide case, two-chronograph sub-dial layout, and classic looks. However, the Caliber 9300 movement is a bit dated at this point and doesn’t approach the B01. However, the Speedmaster Racing Master Chronometer ($8,450) while sportier, is outfitted with the Master Chronometer Caliber 9900 which is METAS-certified and is a much closer competitor to the B01. 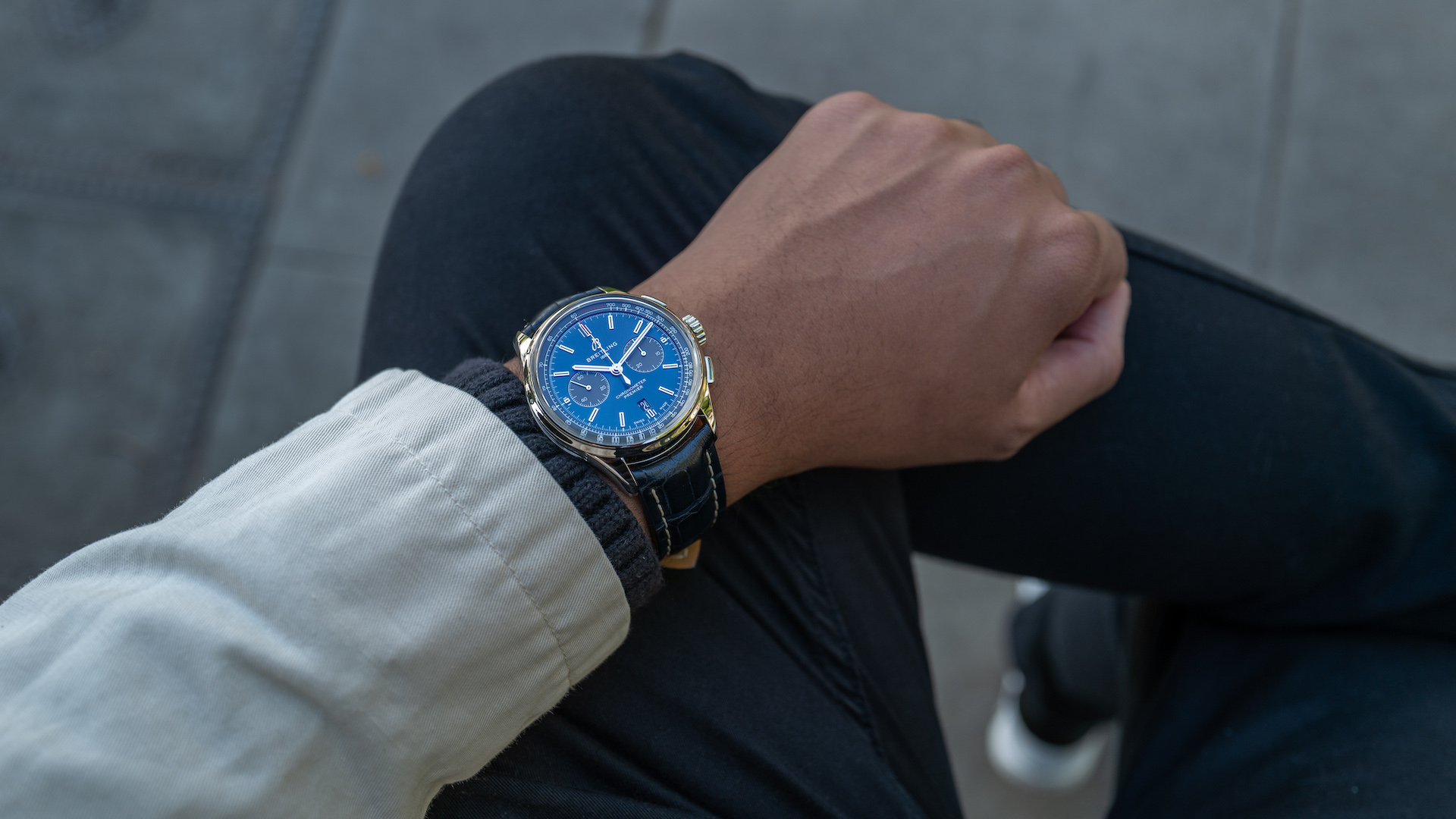 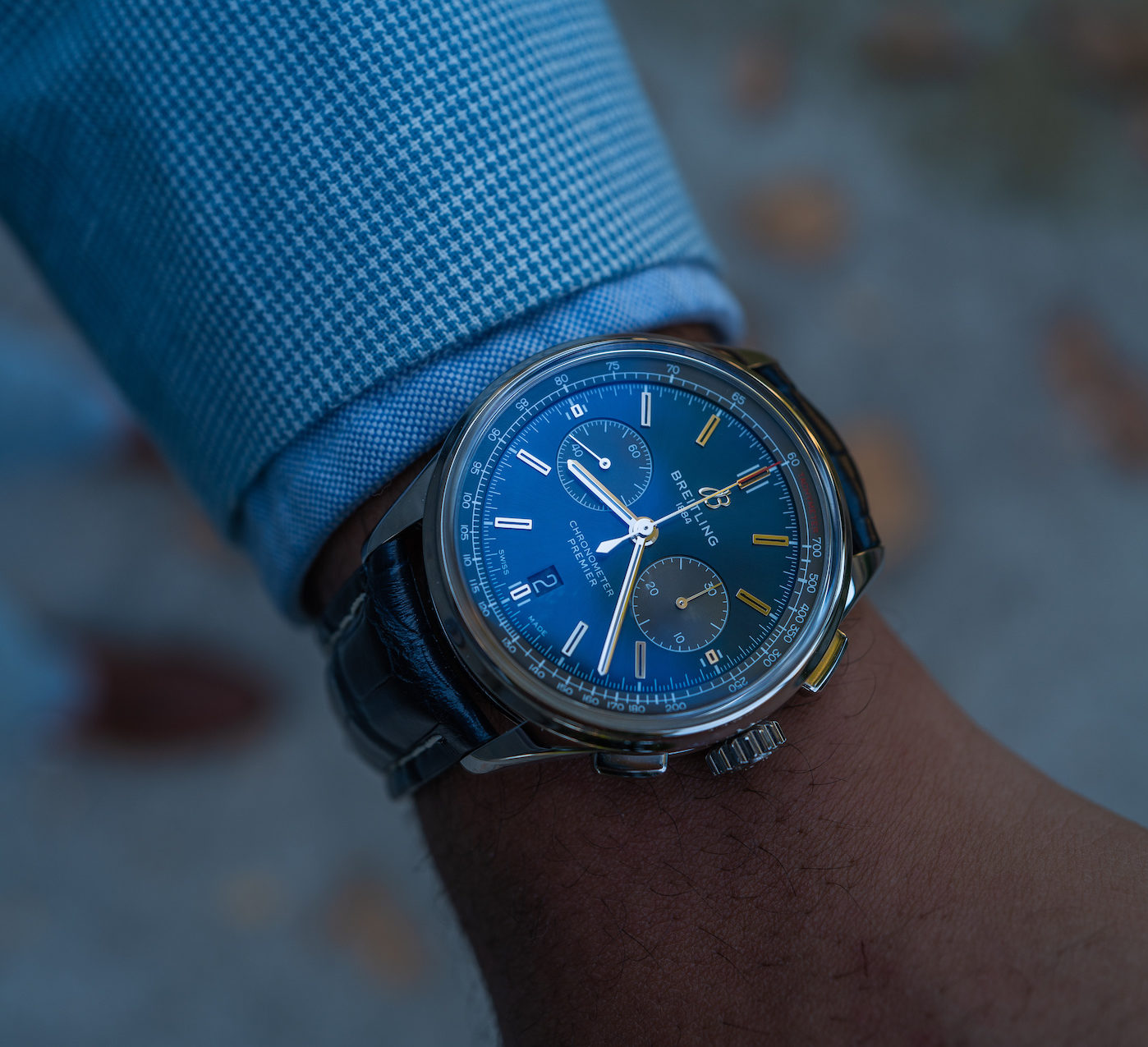 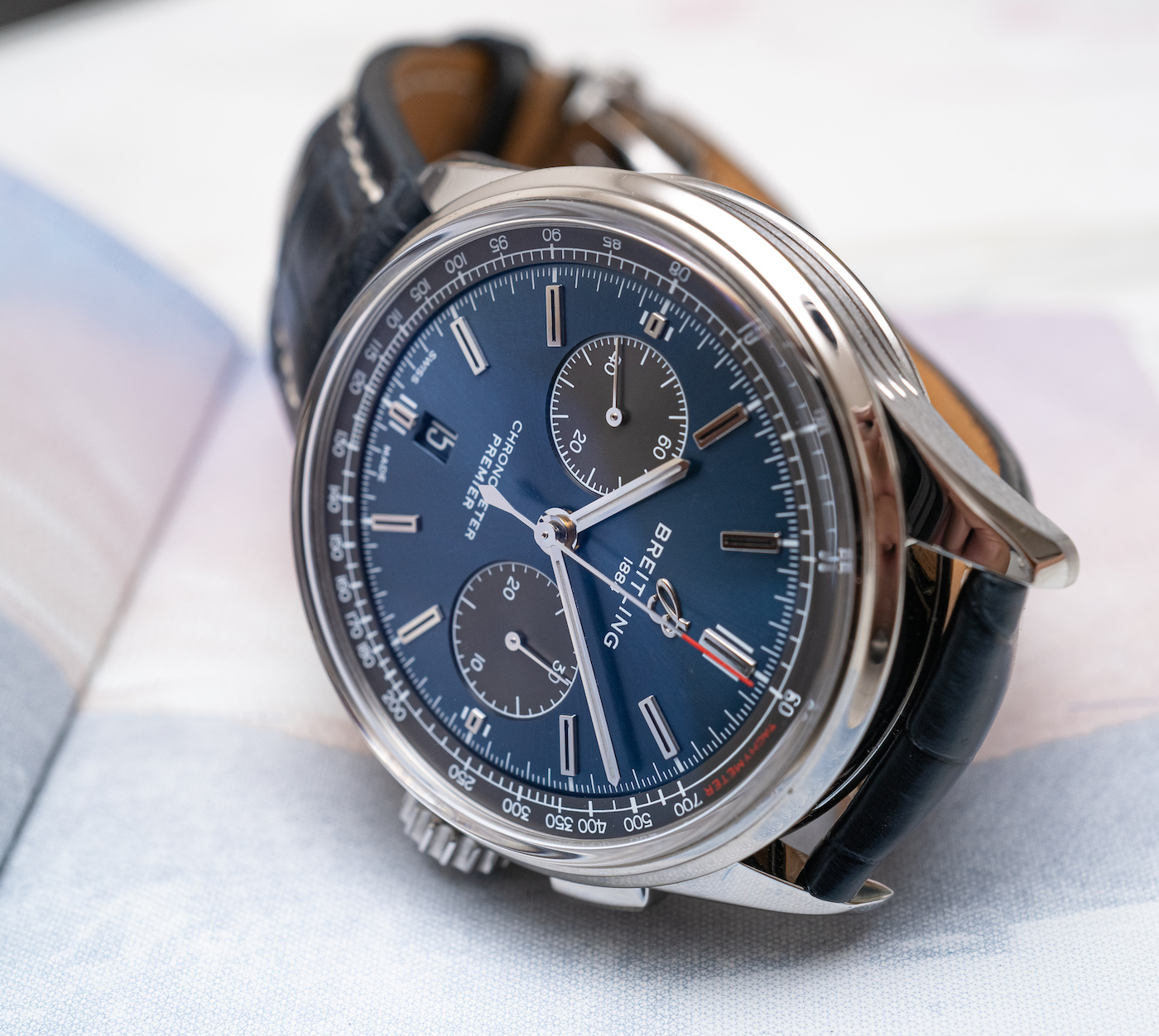 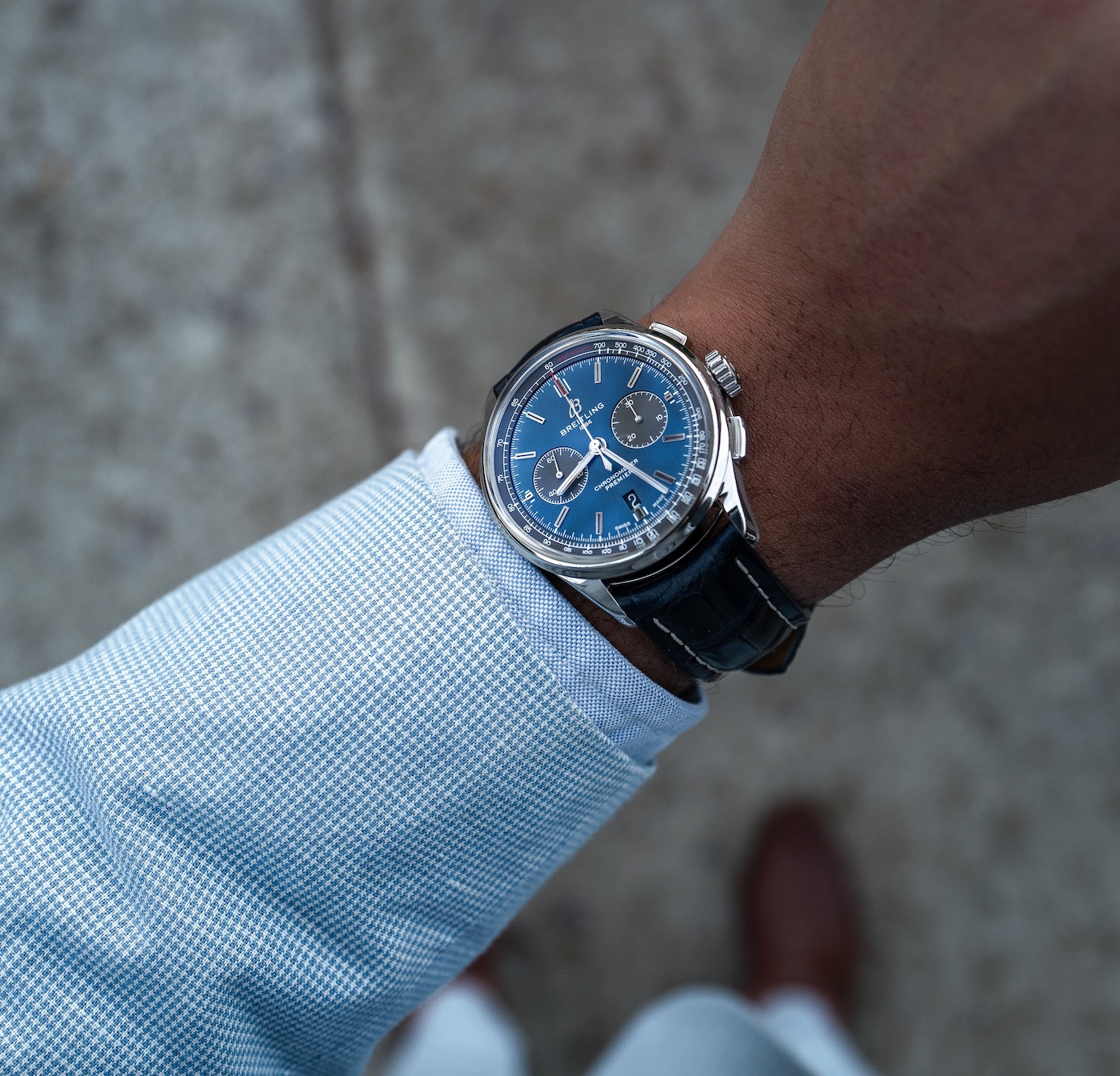 The Zenith Chronomaster El Primero in steel is actually a pretty good value at $6,700, and there have been quite a few varieties in recent history. Obviously, the El Primero movement is one of the all-time greats, and the watch is attractive in the 42mm-wide steel case. It’s sportier than the Breitling, but not in an over- the-top way. That said, I think the finishes on pricier El Primero watches come closer to rivaling those on the Breitling. 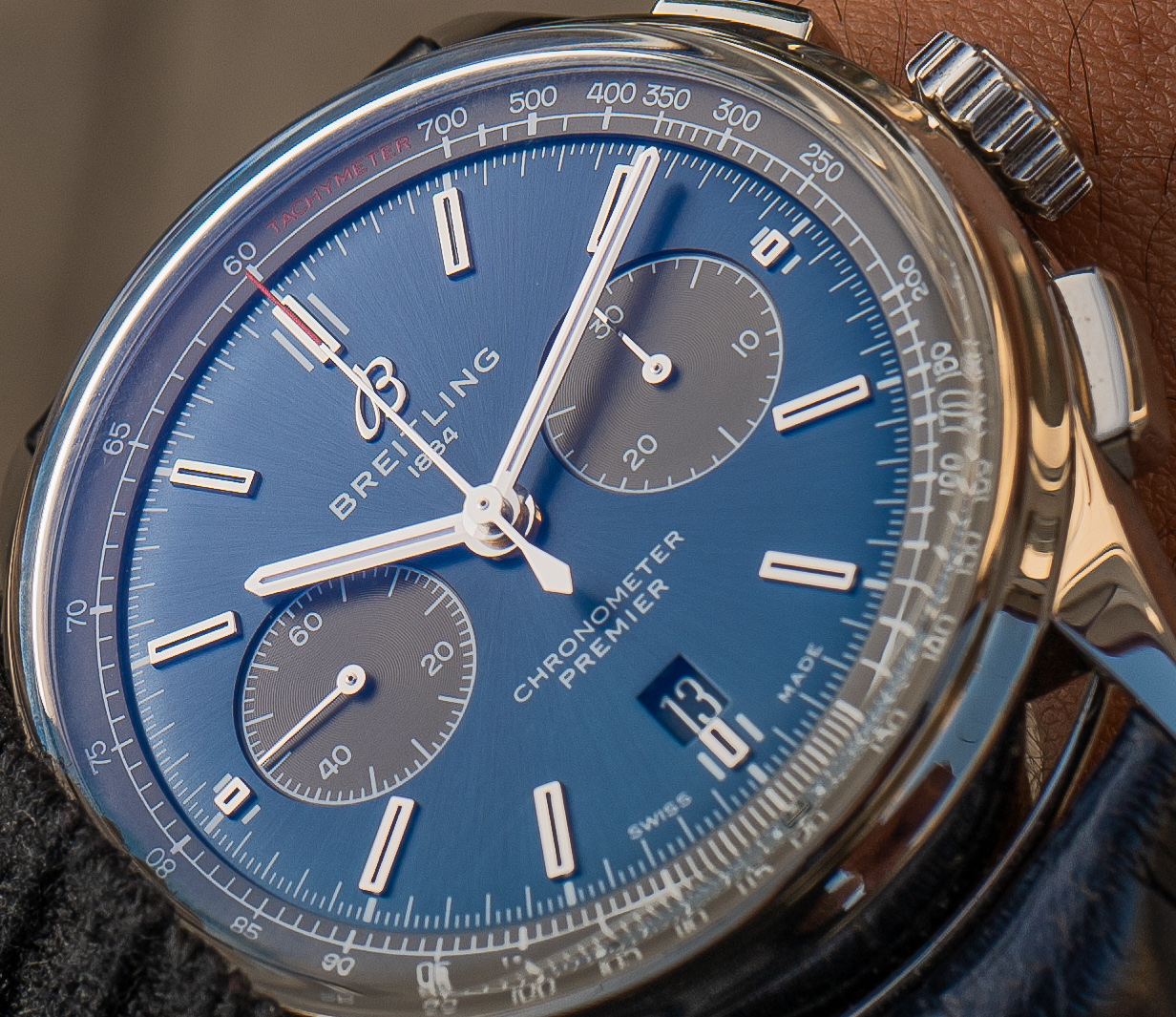 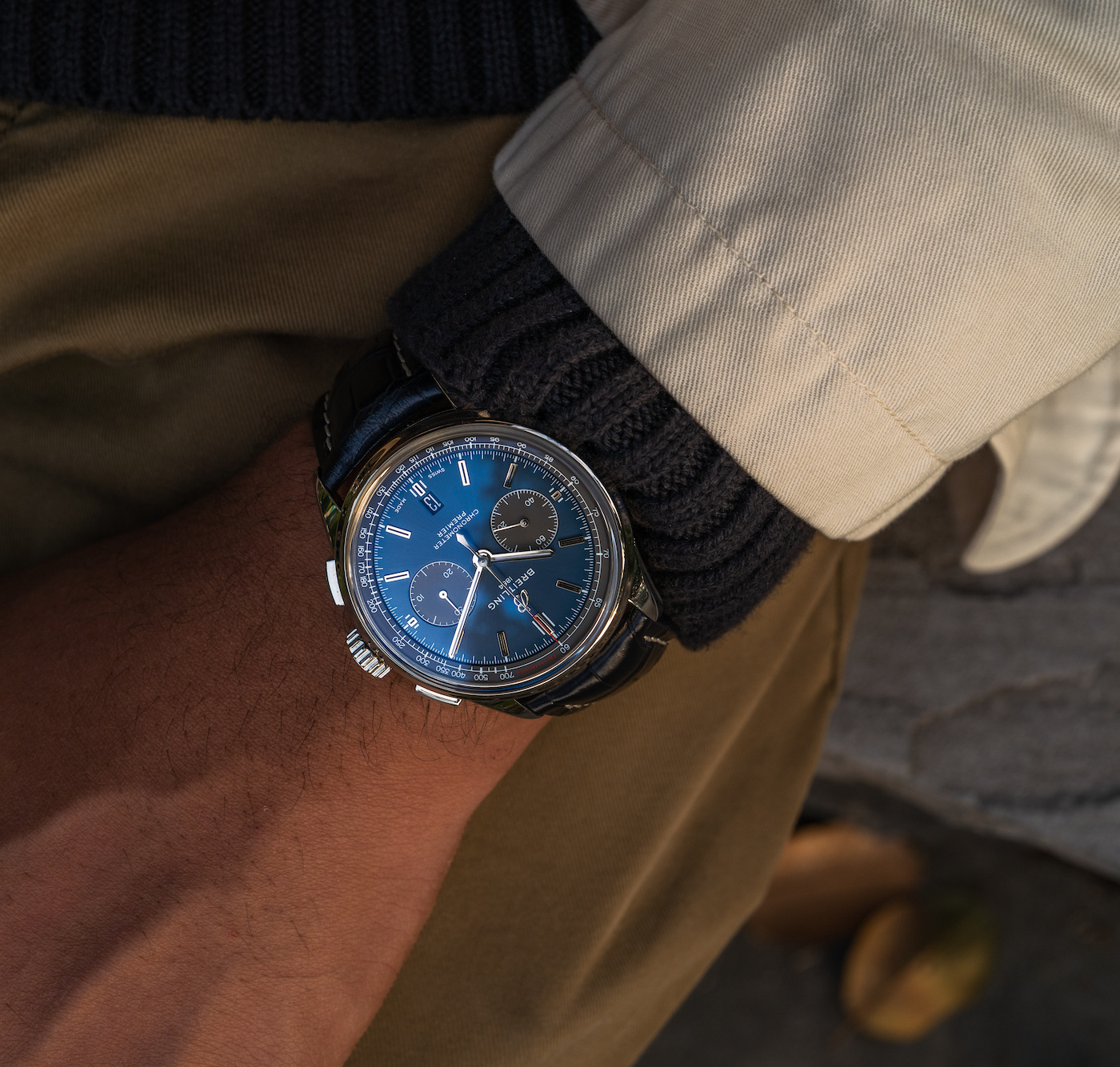 Breitling has steadily been adding to this collection (such as this limited edition Wheels & Waves version), though this blue-dial version and the fantastic Bentley British Racing green-dial models are probably my favorite. The Breitling Premier B01 Chronograph 42 on the leather strap is priced at $8,400, with the steel bracelet option inching the price up to $8,700. You can learn more about the Premier collection here and more about the brand at breitling.com 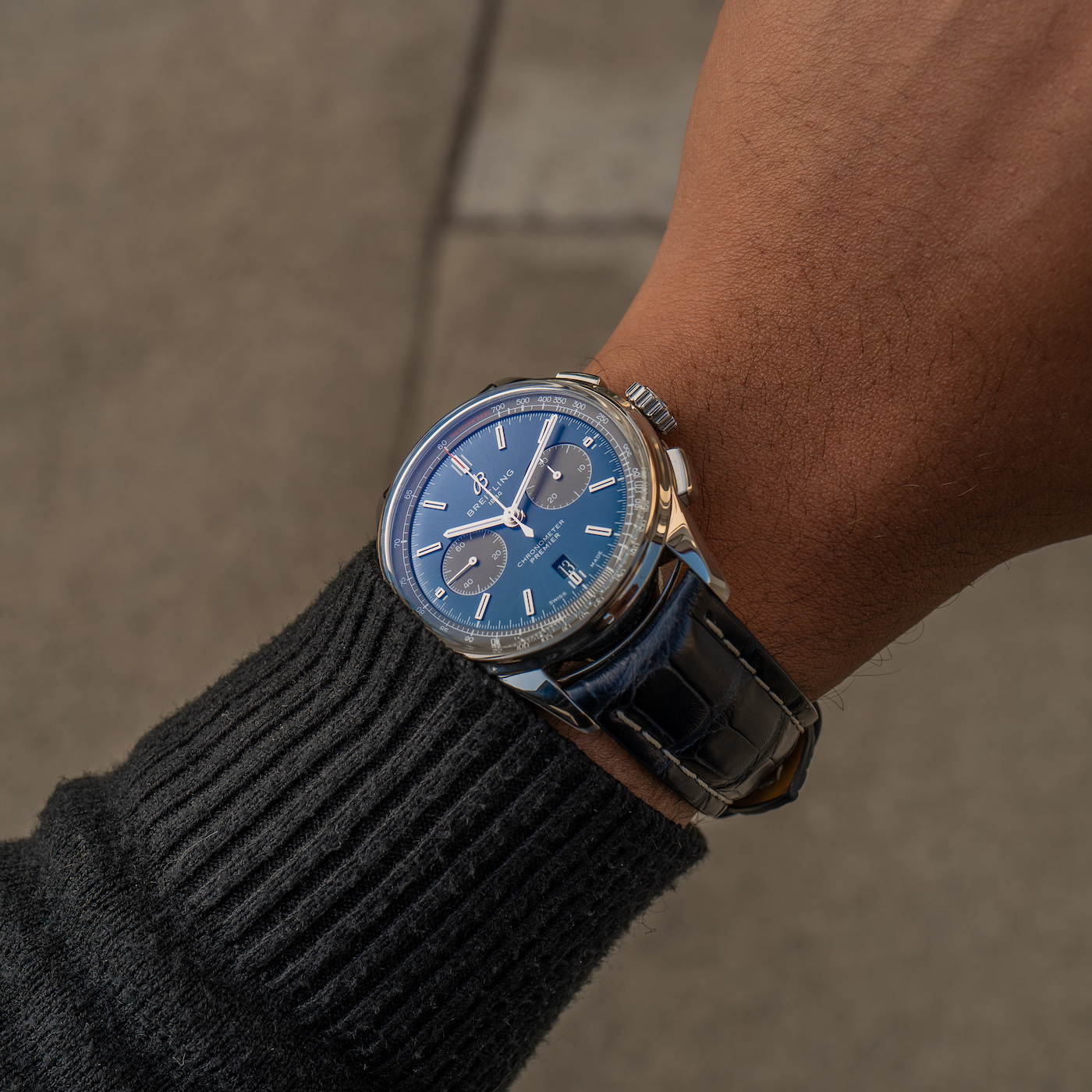 Necessary Data
>Brand: Breitling
>Model: Premier B01 Chronograph 42
>Price: $8,400
>Size: 42mm-wide/13.65mm-thick, just under 50mm lug-to-lug
>Would reviewer personally wear it: Yes
>Friend we’d recommend it to first: Someone who enjoys chronographs but needs a watch that fits in at a variety of settings. Really, anyone who wants a top-notch finished chronograph with a no-compromise modern movement.
>Best characteristic of watch: The case finishing and movement.
>Worst characteristic of watch: My instinct is to say “none” but if I have to, I wouldn’t reject a thinner case.