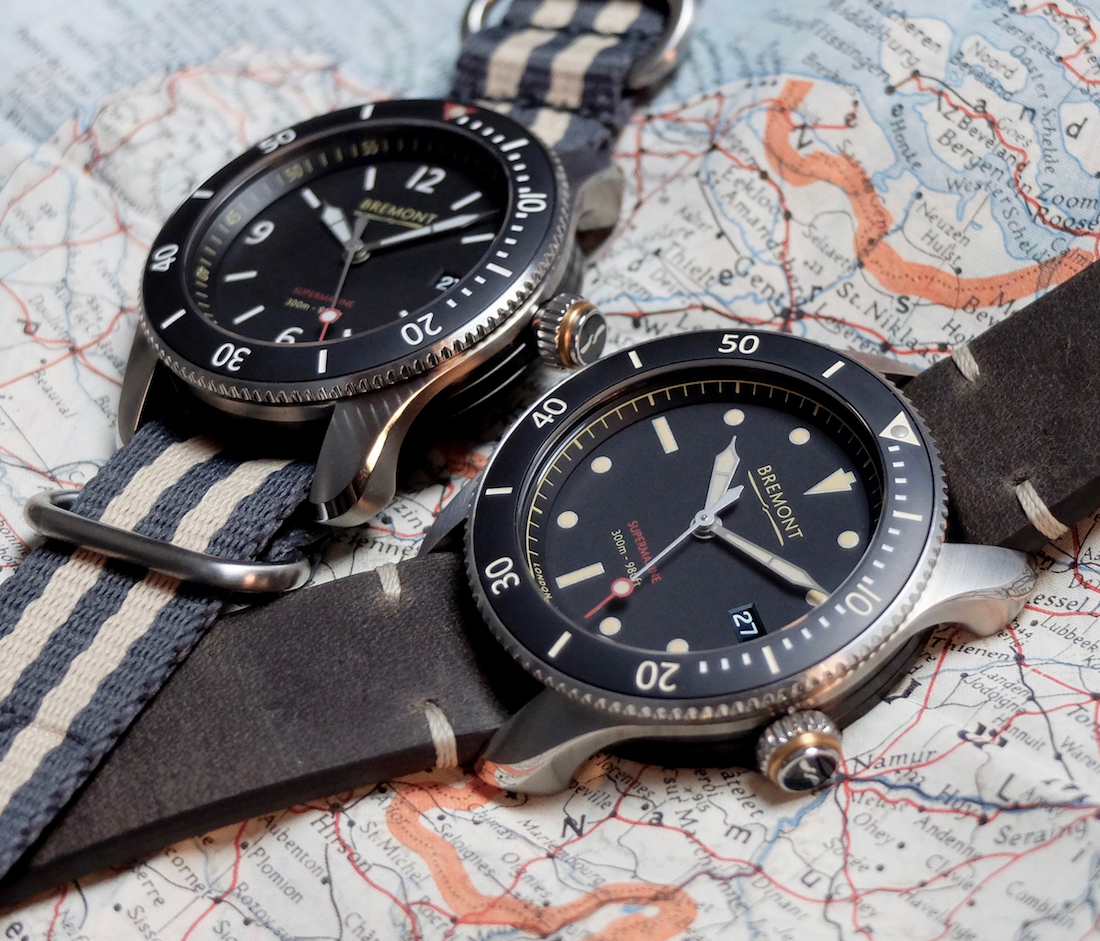 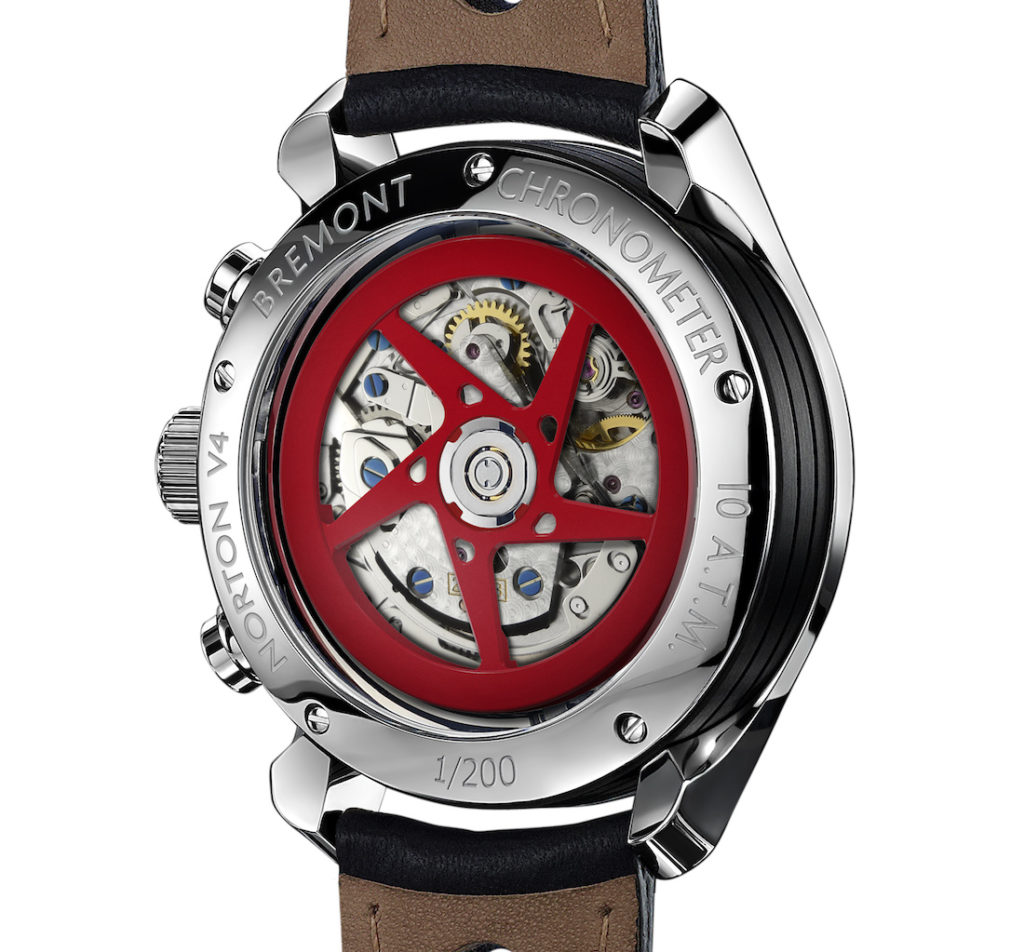 The Bremont Norton V4RR watch comes in the familiar ALT1-C 43mm stainless steel case. Its silver dial has the Norton logo done in a gold text, along with gold borders on the chronograph sub-dials and a cool quirky font used for the Norton logo and hour numerals. The polished nickel hands and the numerals/hour markers are all done in Super Luminova. The Bremont V4RR comes on a racing-inspired calfskin strap with red stitching, and its Be-50AE movement is fitted with a Norton VR-Rim-inspired rotor. All in all, I think it’s a more refined iteration compared to the original Norton 1 LE. 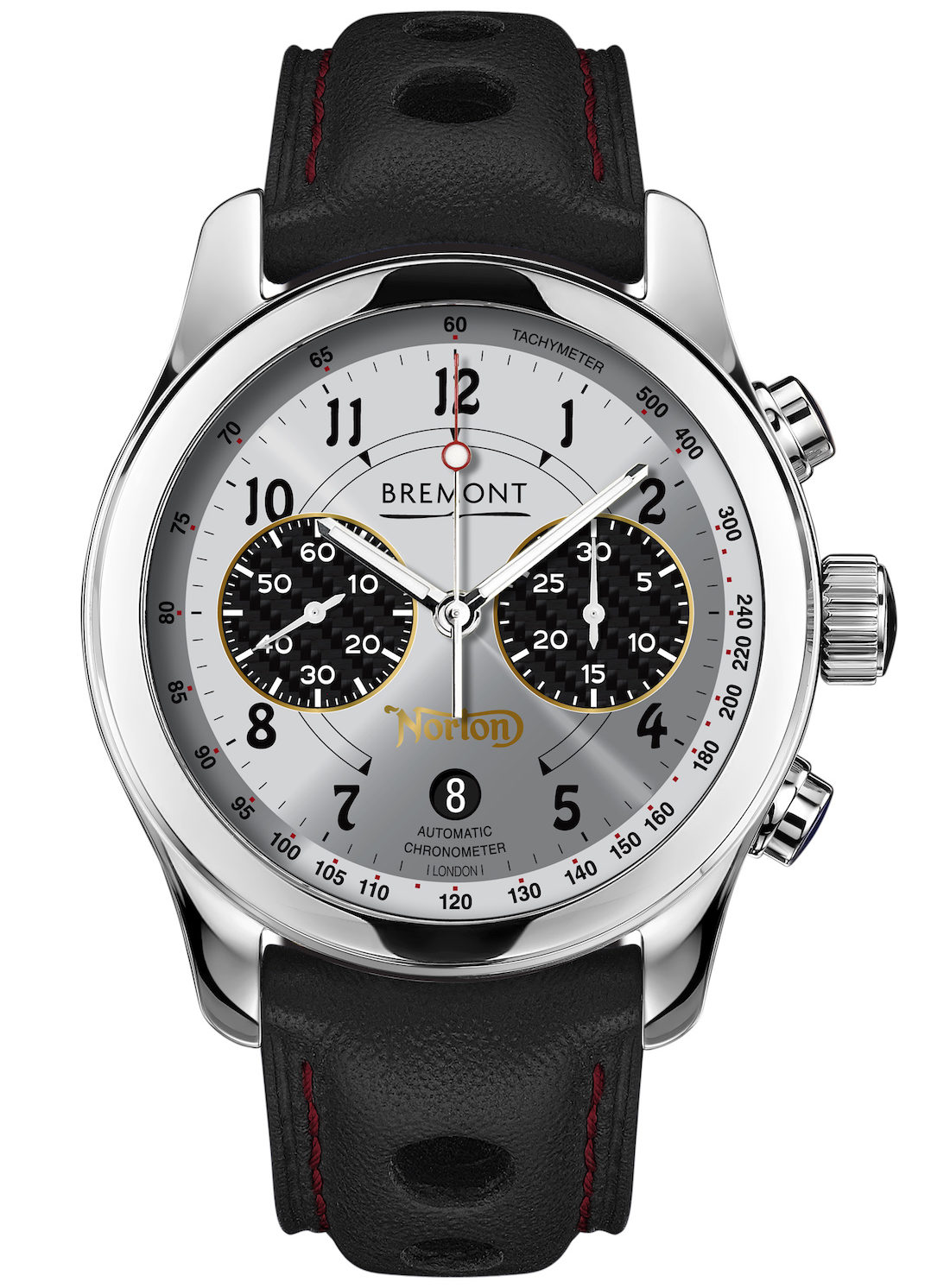 Also, while we don’t have much info yet on the Bremont V4SS limited edition, it will be made available only to owners of the motorcycle with design elements they say are inspired by the Norton bike, with a silvered dial, numerals inspired by the bike’s speedometer, a black Norton logo, and red border on the chronograph sub-dials. The Bremont Norton V4RR watch will be priced at $7,595 USD. 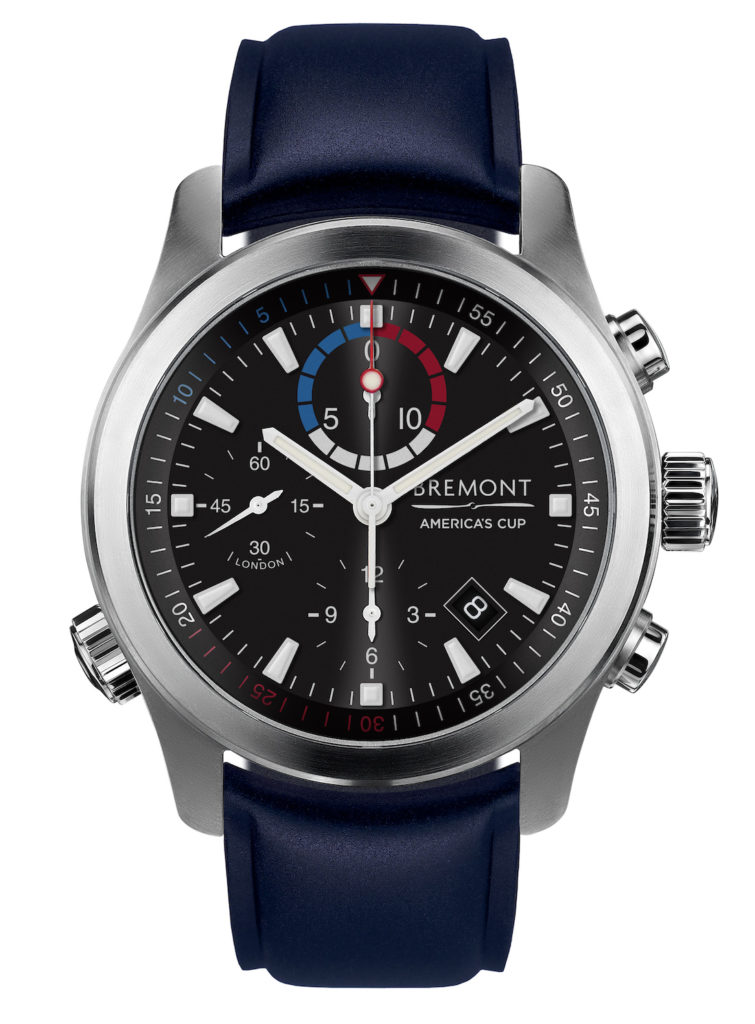 Each of the new America’s Cup watches for 2017 are modifications of existing Bremont timepieces. The sportier of the two is the Bremont AC-R-II which is based on the Bremont ALT1-Z. that has been transformed into a classy and handsome simple regatta timer. The 43mm-wide case is available in hardened steel, which. The inner case is black DLC-coated for a distinct look and the overall Trip-Tick case construction offers high levels of shock protection and water-resistance of 100 meters. The base Swiss ETA Valjoux 7750 automatic chronograph (which Bremont calls their caliber BE-54AE) is COSC Chronometer certified. On the Bremont AC-R-II the chronograph minute counter has been designed to allow for easy countdowns of five-minute increments. Around the dial is an internal rotating Bremont “Roto-Click” bezel. The Bremont AC-R-II comes on a comfortable blue rubber strap and will be produced as a limited edition of 135 pieces priced at $6,695 USD in steel. 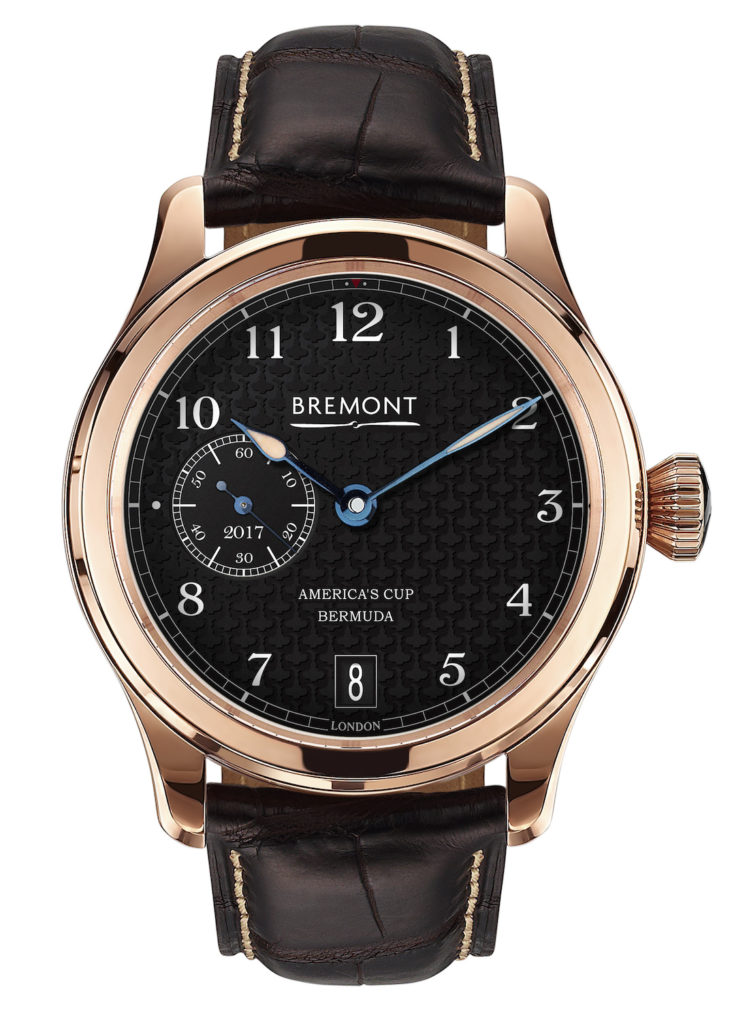 The more limited new Americas’ Cup watch is the Bremont AC35, a limited edition of 35 pieces to honor the closing of the 35th America’s Cup race. With a classic look originally inspired by ship deck clocks, the Bremont AC35 is 43mm wide in an 18k rose gold Trip-Tick case with a dial that has a repeating pattern motif of the America’s Cup “Auld Mug” trophy on the black face. “2017” is printed on the dial in the small seconds subdial, and Bremont used attractive blued steel hands (with painted luminant) on the dial against the Arabic numeral hour markers. Inside the Bremont AC35 is the partially in-house-made-in-England (with the rest coming from Switzerland) Bremont caliber BWC/01 automatic that is conspicuously displayed through the rear of the watch via the sapphire crystal window – and, of course, is COSC Chronometer certified as well. The Bremont AC35 comes paired on a brown alligator strap and is priced at $23,495 USD. 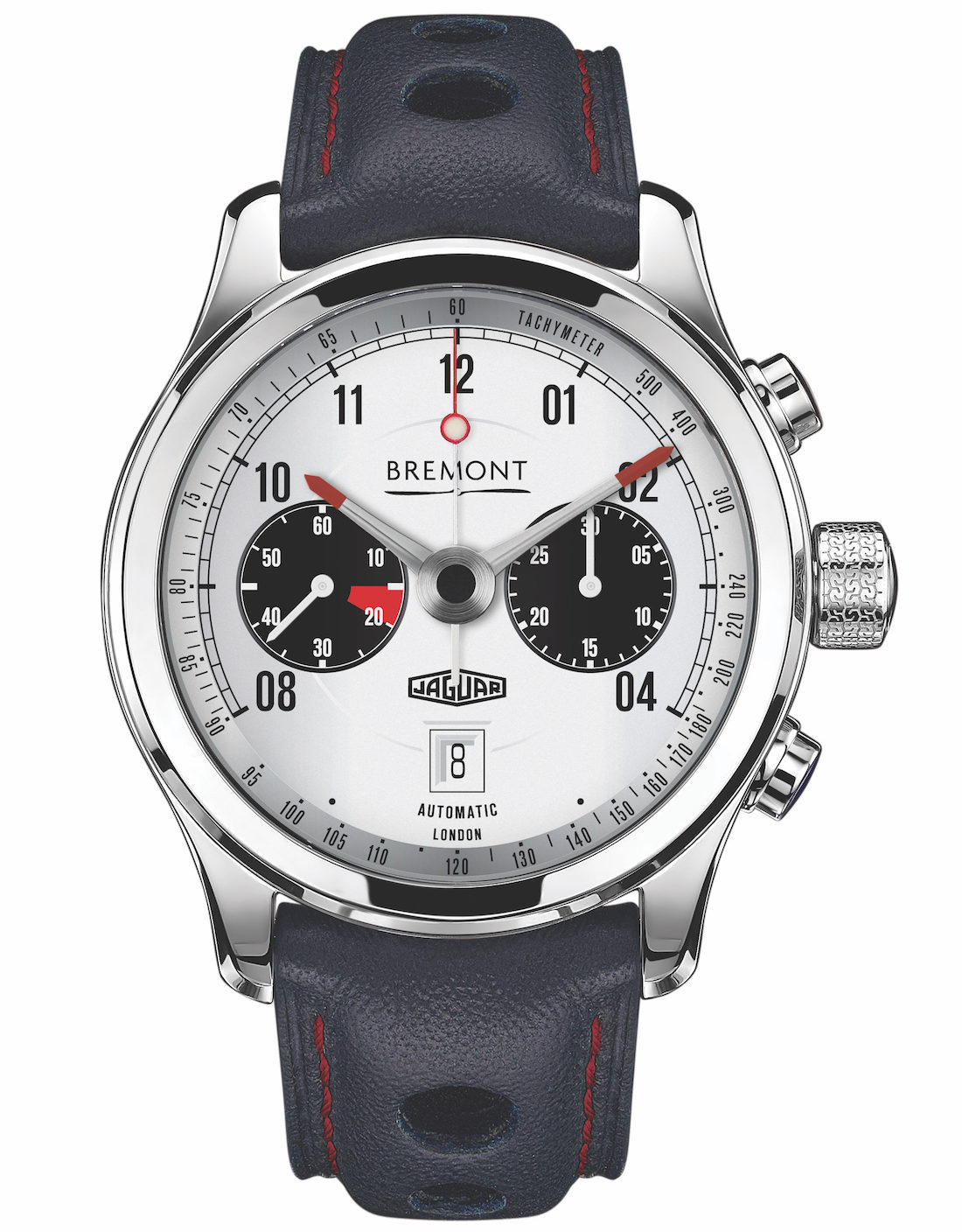 Bremont and Jaguar’s partnership began with their limited edition Jaguar E-Type Chronometer followed by the non-limited edition Jaguar MKI and MKII watches. For 2017, we see the Bremont Jaguar MKII WH watch inspired by the white-and-red-colored number 23 E-Type which won the 12 hours of Sebring race in the mid-1960s. The inspiration is clear when you look at the black and red color use on the dial, as well as the addition of a  tachymeter scale that fully encircles the inner dial. It’s a differentiation from the MKII that may get mixed reviews, especially considering how little tachymetres are actually used, but is directly connected to motorsports and automotive-themed watch design. 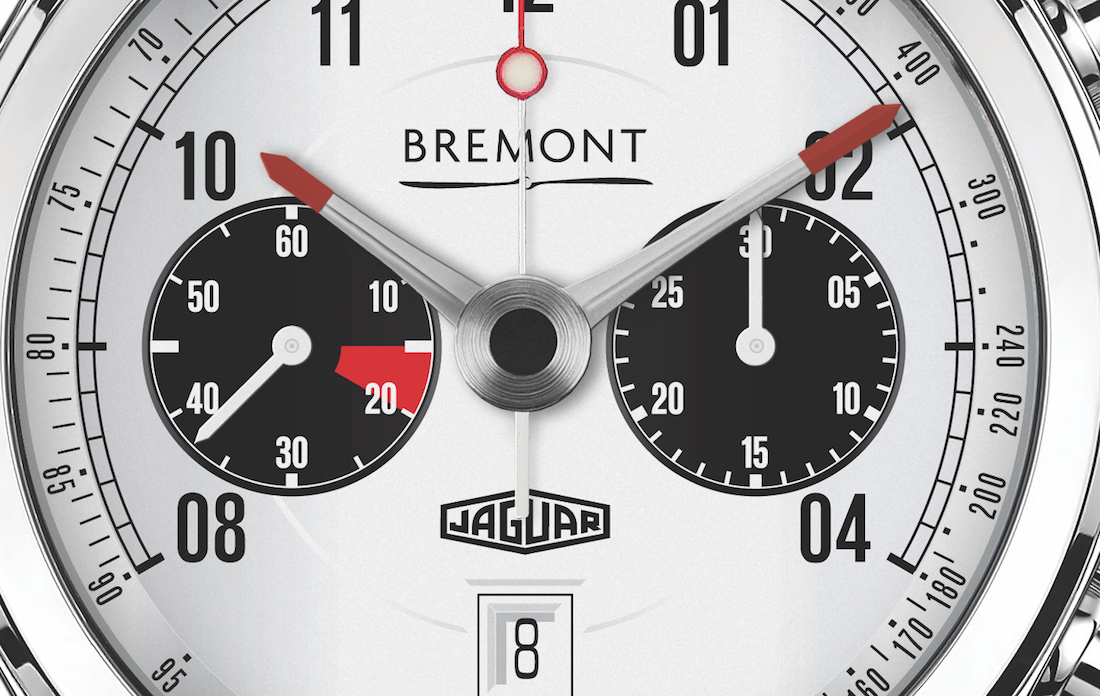 The white metal dial with red-tipped, polished nickel hands is complimented by the blue calf strap with red stitching. The decorated crown, Jaguar logo above 6 o’clock, and the red-zone on the seconds sub-dial maintain the handsome looks of the Bremont MKII. Case dimensions are the same at 43mm wide and 16mm thick, housing the BE-50AE movement (based on the ETA 7750), providing a 42-hour power reserve. The price for the Bremont Jaguar MKII WH watch is $7,195. 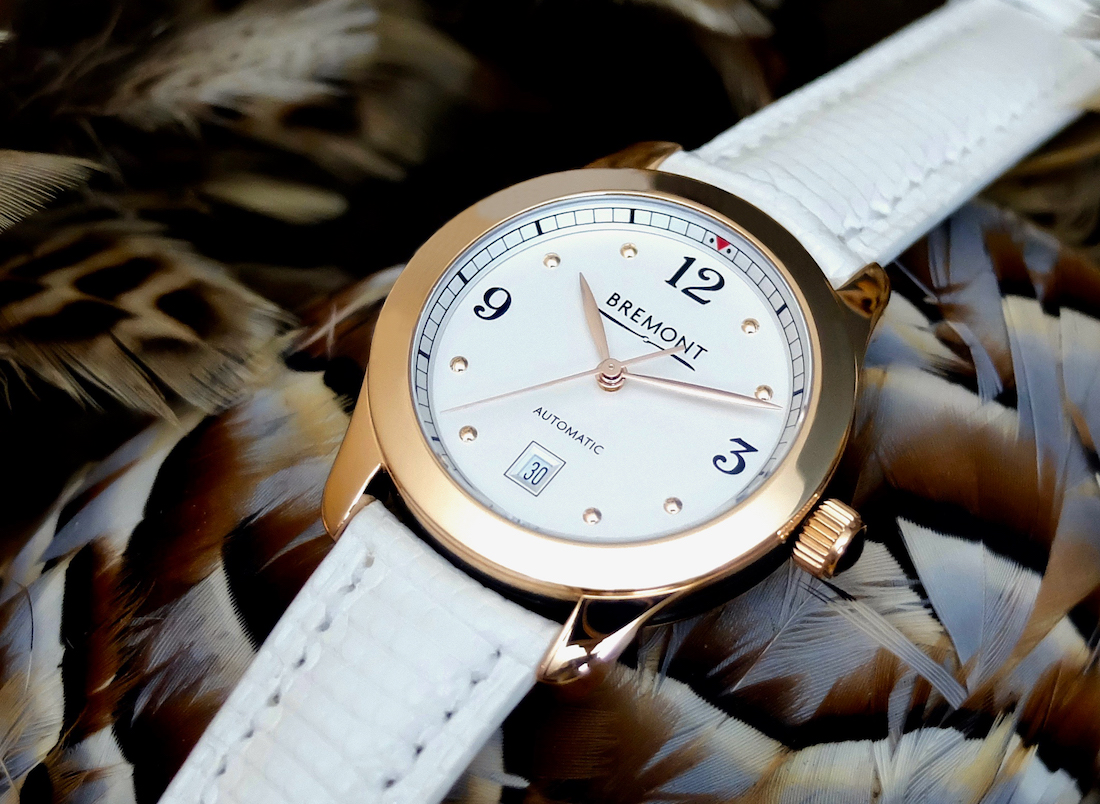 This is an expansion of the ladies-centric Bremont Solo 32 line up, made new with rose gold cases and accents. The Bremont Solo 32 line (named for the 32mm case sizing) was first announced at Baselworld last year and, after being well-received in the marketplace, Bremont has seen fit to expand the lineup. 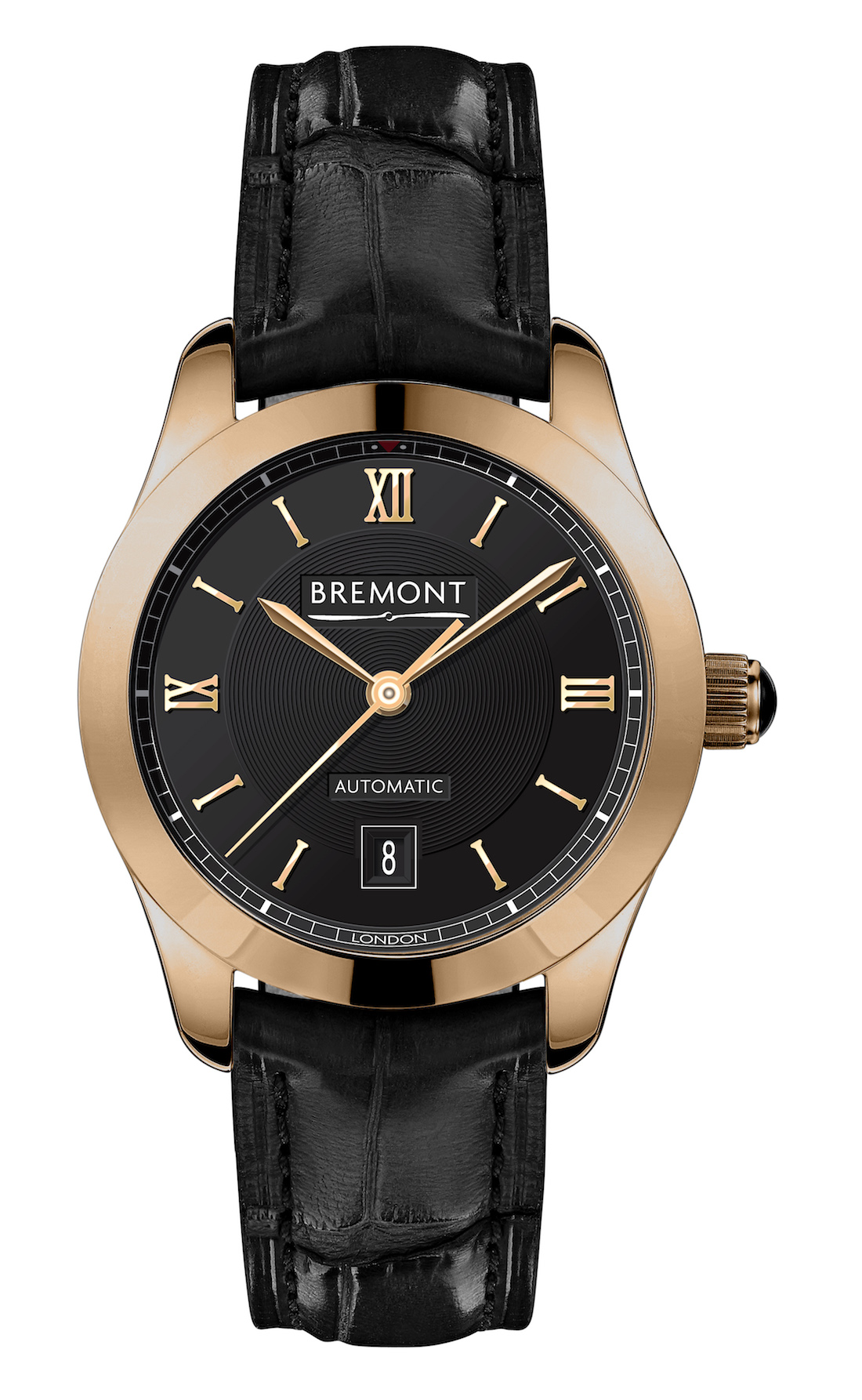 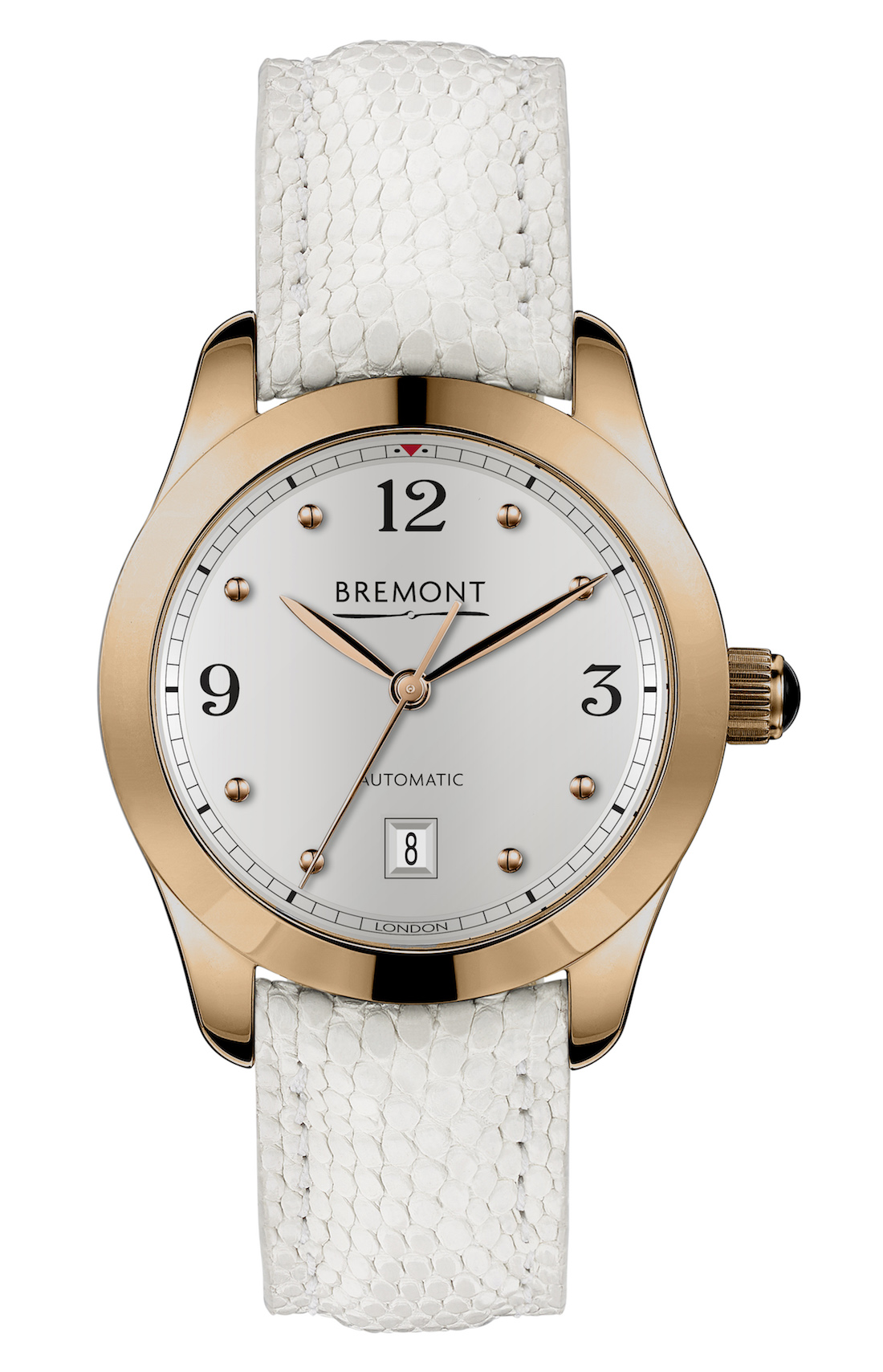 As with all Bremont Solo 32 models, these are powered by automatic movements, in this case, the Bremont BE-10AE. This COSC-certified movement is ETA-based and ticks at 4Hz while offering a 40-hour power reserve. Both watches feature domed anti-reflective and scratch resistant sapphire crystals and are water resistant to 50 meters.

Both models will retail for $9,795 USD and offer an entirely different appeal than the three steel models that were announced this past March.

We can’t wait to be in London and go hands-on with all of the above watches so be sure to follow @ablogtowatch on Instagram and let us know which is your favourite new Bremont in the comments. We’ll have plenty more later this week from London. bremont.com