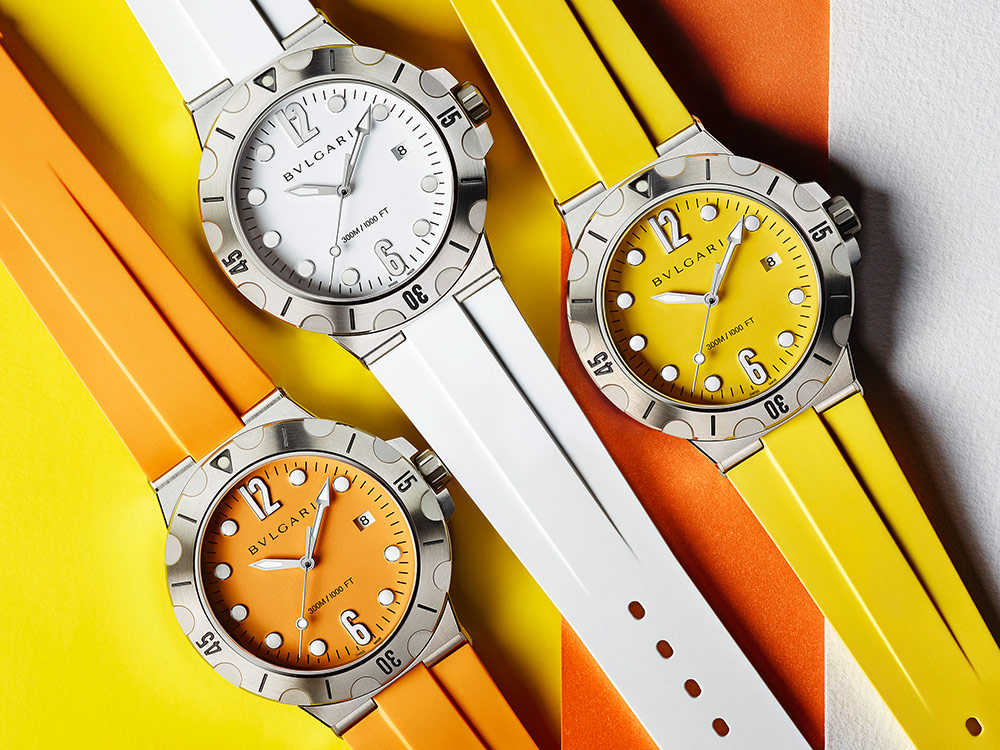 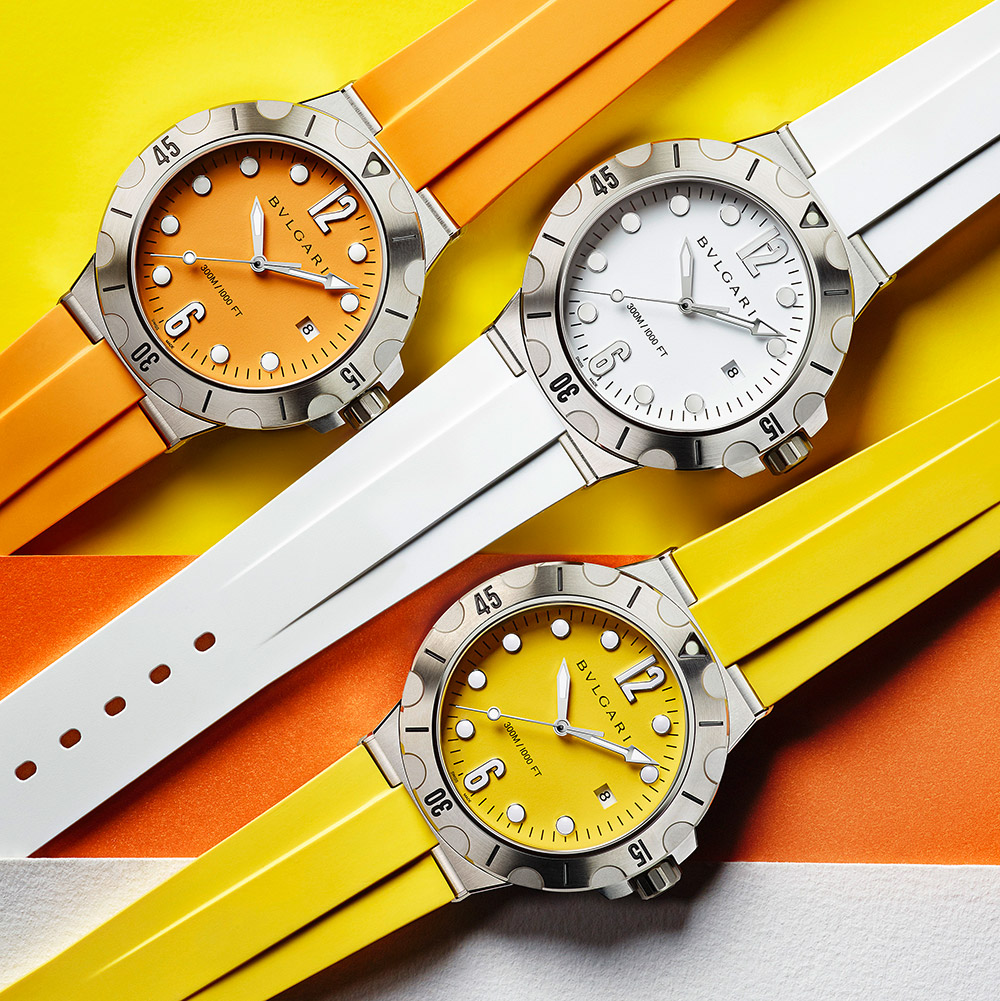 It is often an uphill battle for fashion brands to be accepted by watch enthusiasts, but Bulgari has thoroughly proven their dedication to the segment with everything from ultra high-end complications to more down-to-earth and practical luxury watches such as the Bulgari Diagono Scuba. New for summer 2017 are several different colors of Bulgari’s sportiest watch in summery, retina-searing orange, yellow, and white models with coordinated strap and dial colors. 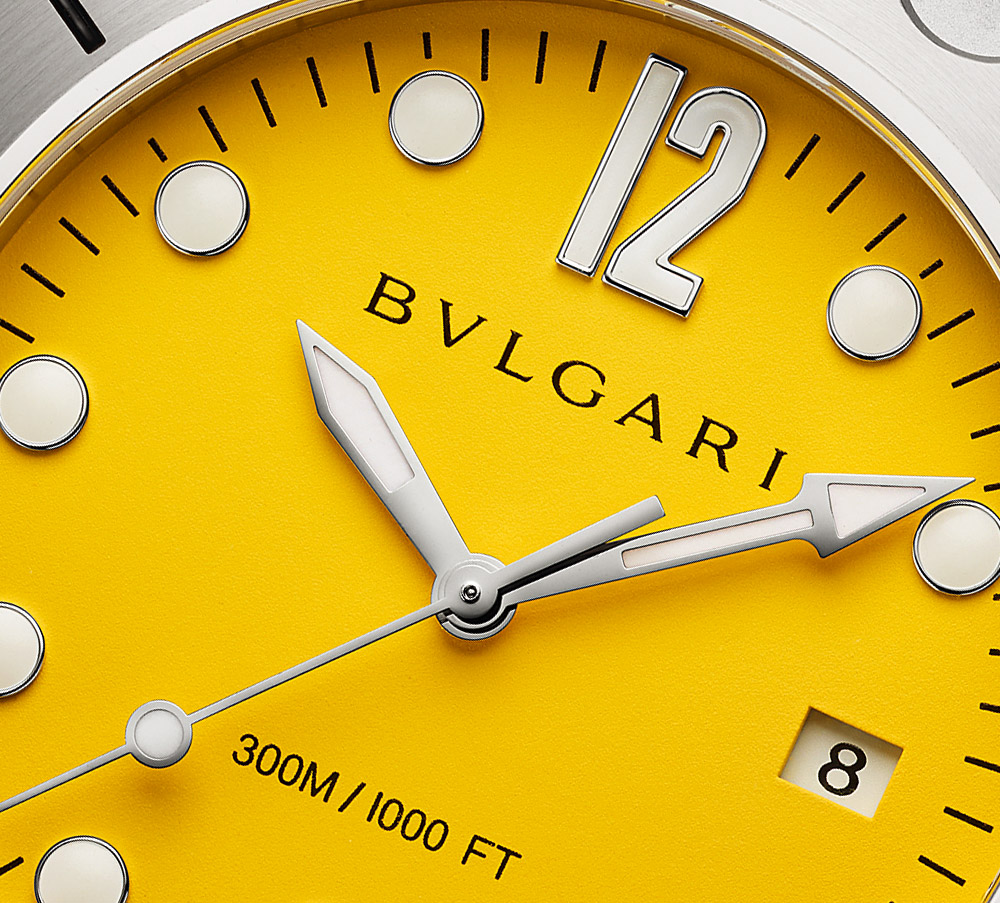 Around since 1994 and re-released in 2015 with a manufacture movement, the Diagono Scuba (reviewed here) is Bulgari’s “real” diving watch, featuring 300m of water resistance and a rotating diver’s bezel. Just as in the previous versions with more traditional color pallets, these colorful new editions of the Diagono Scuba feature the same 41mm stainless steel case, 300m of water resistance, sapphire crystal, and a decorated LV 191 manufacture “Solotemo” (“time only”) movement with time and date functions behind a solid case back. Each has a neatly integrated rubber strap with a straightforward buckle, in colors to match the dials. 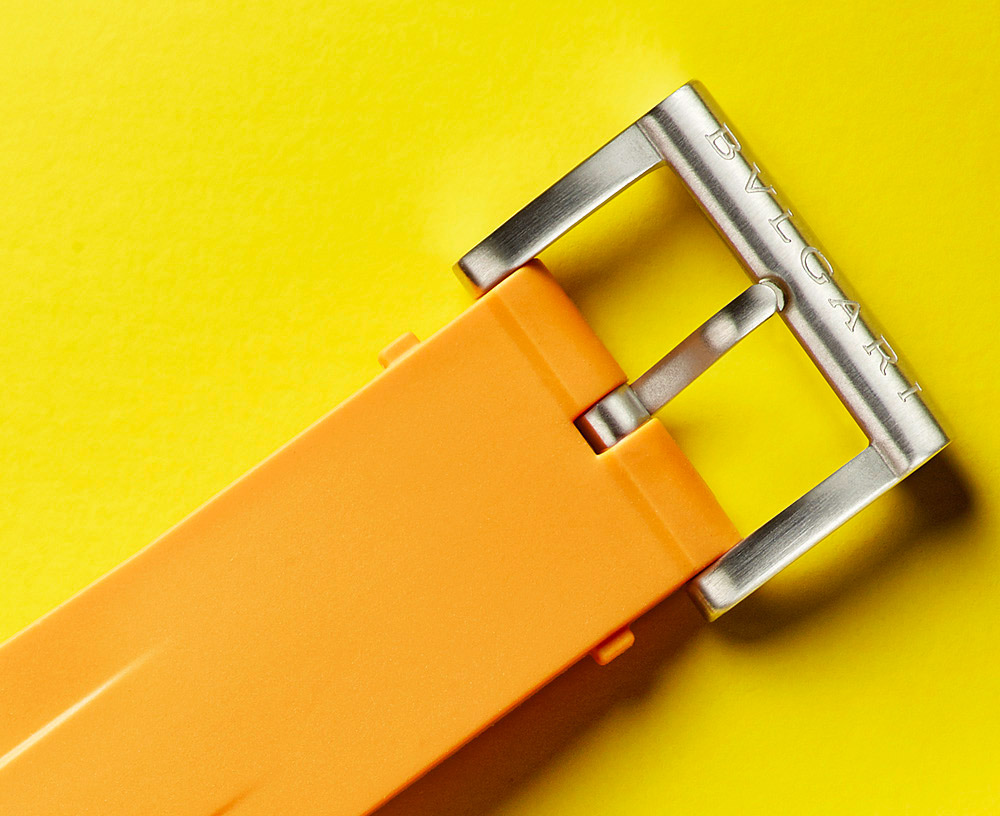 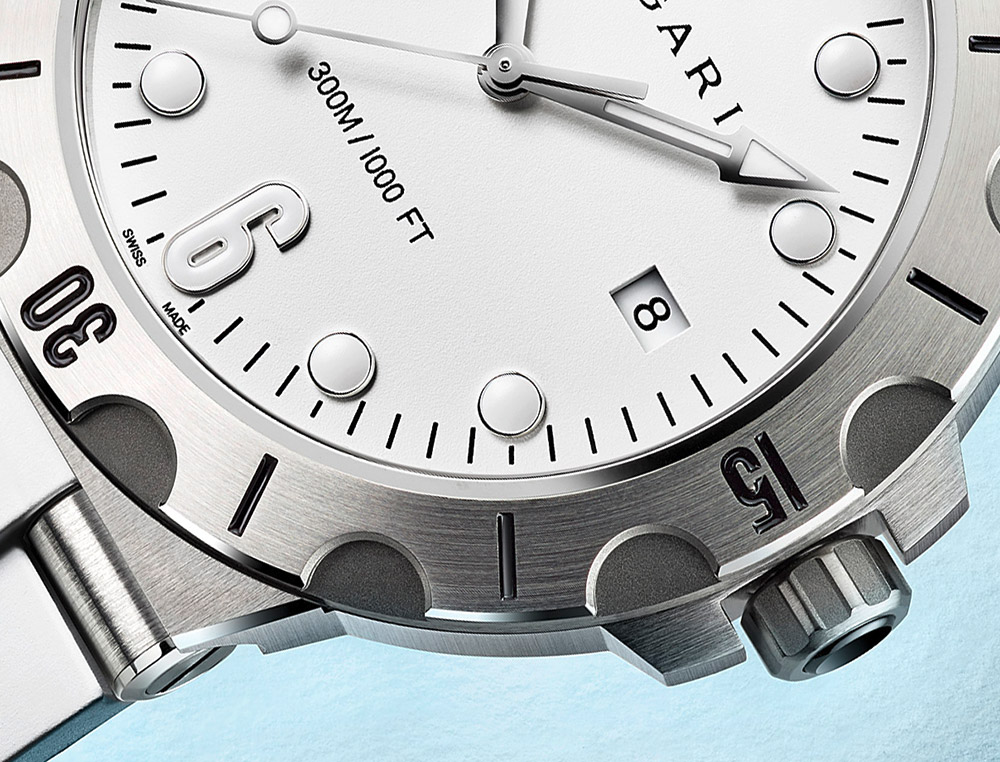 When the Diagono Scuba was re-released in 2015, it came with either a black or white dial and was housed in either stainless steel or two-tone stainless steel and 18k pink gold. These versions of the Scuba are all stainless steel and with rubber straps as opposed the bracelets, making Bulgari’s sportiest model even sportier and breaking yet further from their more haute couture design language. 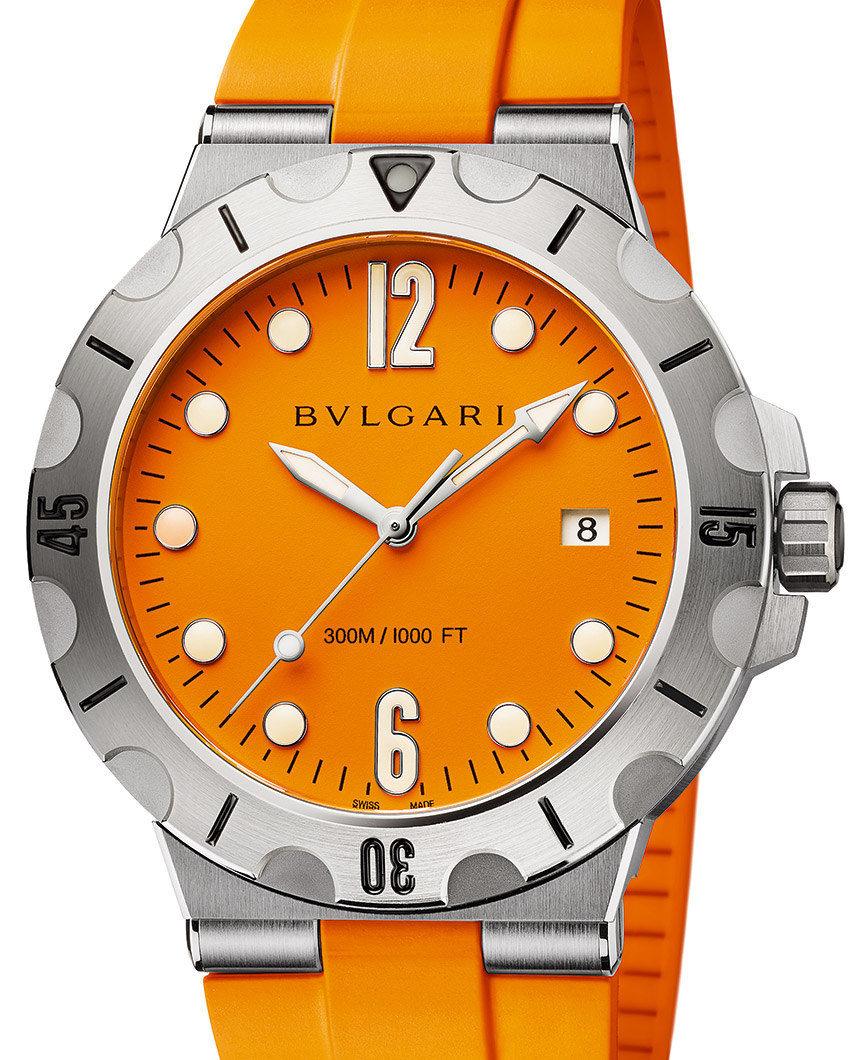 While Bulgari’s association with high fashion is hard for some watch enthusiasts to see past, we believe the Bulgari Diagono Scuba deserves recognition as a capable dive watch. Another hyper-complicated luxury lifestyle piece like these minute repeater watches would be all too expected from Bulgari, but the Bulgari Diagono Scuba helps demonstrate that the brand can do more. If anything, the Bulgari Diagono Scuba’s design is fairly minimal when stacked up against some comparably priced pieces like the no-date Rolex Submariner or the variety of Omega Planet Ocean models. Also, and we don’t often get to say this, the Diagono Scuba looks to me like nothing else out there. In particular, the bezel is unique and makes the watch recognizable even at a distance. 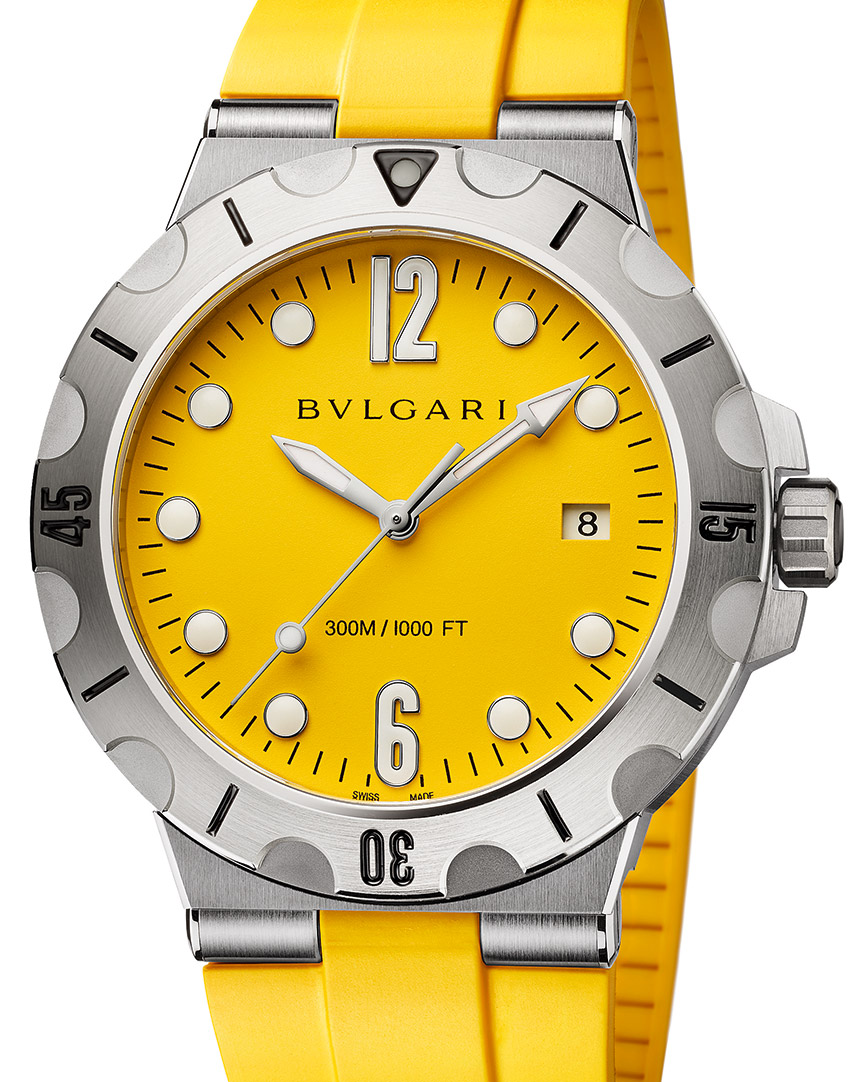 Looks aside, legitimate diving credentials are clearly a central element of the Bulgari Diagono Scuba. Although it seems unlikely, there are those who dive with luxury watches like the Rolex Submariner, so there is absolutely no reason a fairly serious diver (at least the kind who wears an expensive watch) couldn’t purchase and use the Diagono Scuba as their backup dive timer. It’s also worth noting that the Bulgari Diagono Scuba’s list price is about $1,000 less than the venerable no-date Rolex Submariner despite having very similar specifications – and we included it in our Top 10 Watch Alternatives To The Rolex Submariner article here. 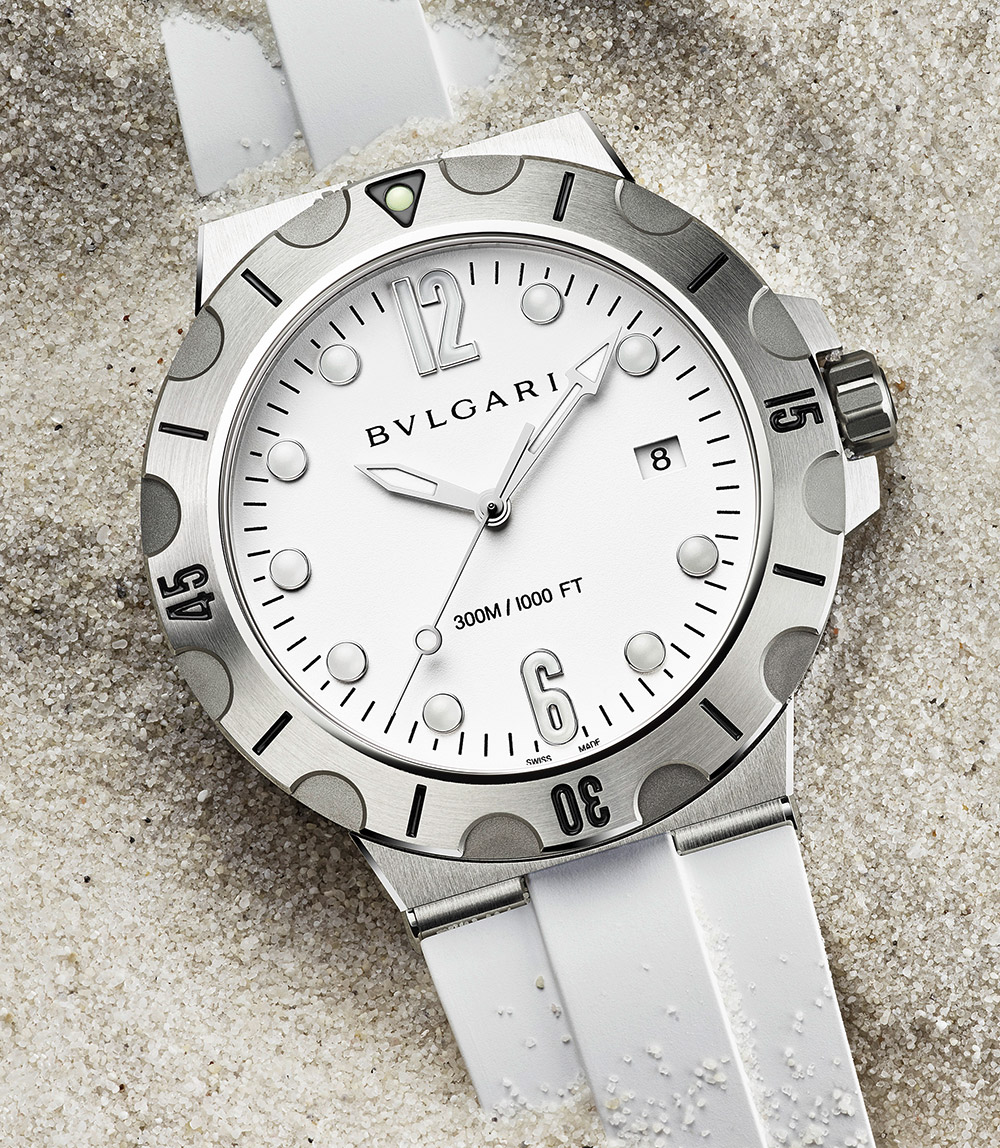 One small issue that comes to mind for me is the integrated strap design which thoroughly limits the strap options of the eventual wearer. While Bulgari’s straps and bracelets are as good as any and better than most, many actual divers prefer the use of a nylon pull-through strap like a NATO or a ZULU. 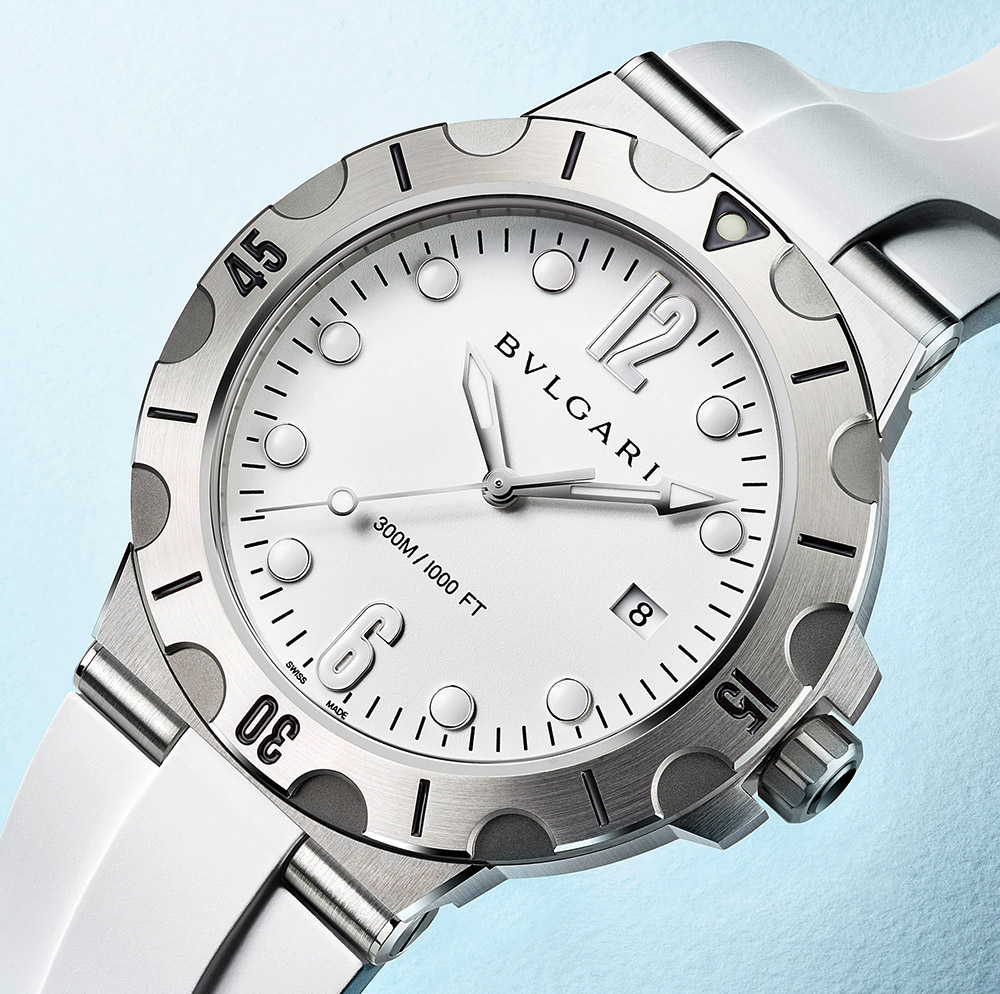 Around the beginning of the year, we mentioned that among “10 Things In Watches We Want To See More Of, And Less Of In 2017,” we wanted “more bright colors.” Well, Bulgari has certainly delivered that. Clearly released to coincide with summer, sunglasses will look appropriate when worn with these watches and might also help you read the time on them. The “summer wardrobe” character of the release does seem to speak to Bulgari’s fashion background whereas many watch people are looking for timeless items that transcend things like “seasonal trends.” That said, there’s nothing wrong with variety, colors, and fun – especially when applied to a solid base product.

The Bulgari Diagono Scuba in its new dial colors of orange, yellow, and white each come with color-coordinated rubber straps and retail for $6,550, $200 less than the core Bulgari Diagono Pro with a black dial on a black strap. bulgari.com