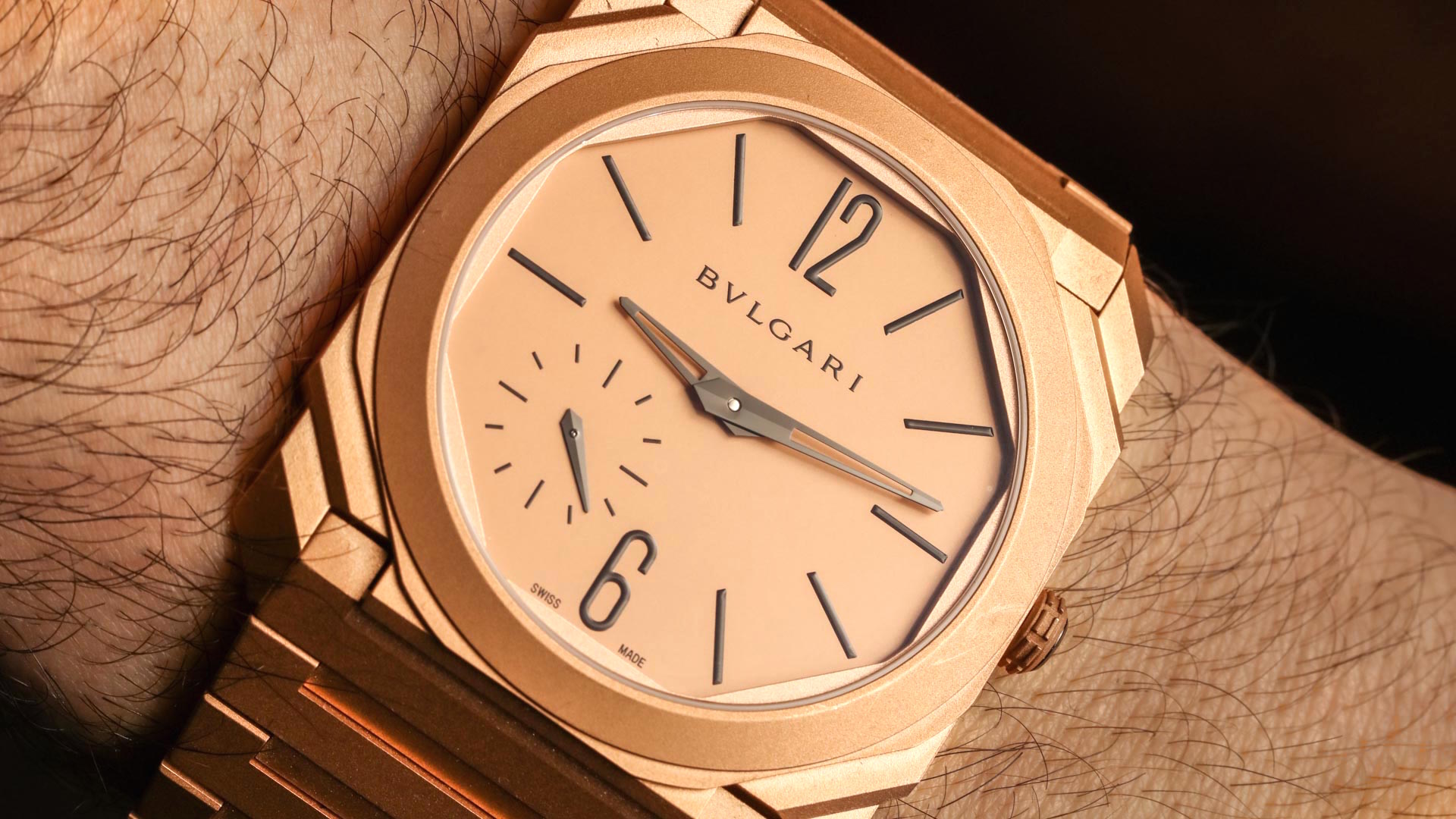 You don’t have to be a longtime reader to know that we sorta love the Bulgari Octo. We’ve loved it in plain-jane steel, we’ve loved it when things get complicated, when it literally sings, but we really loved it when it broke some records and sent Piaget scrambling. And hell, we might even love it now in pink. As the latest recipient of the Midas touch, the Octo Finissimo Automatic Gold might not be as fresh as some of the earlier iterations that once got our blood racing nearly two years ago, but it hardly matters – it is, still one of the most compelling and original modern watch designs of the last decade. 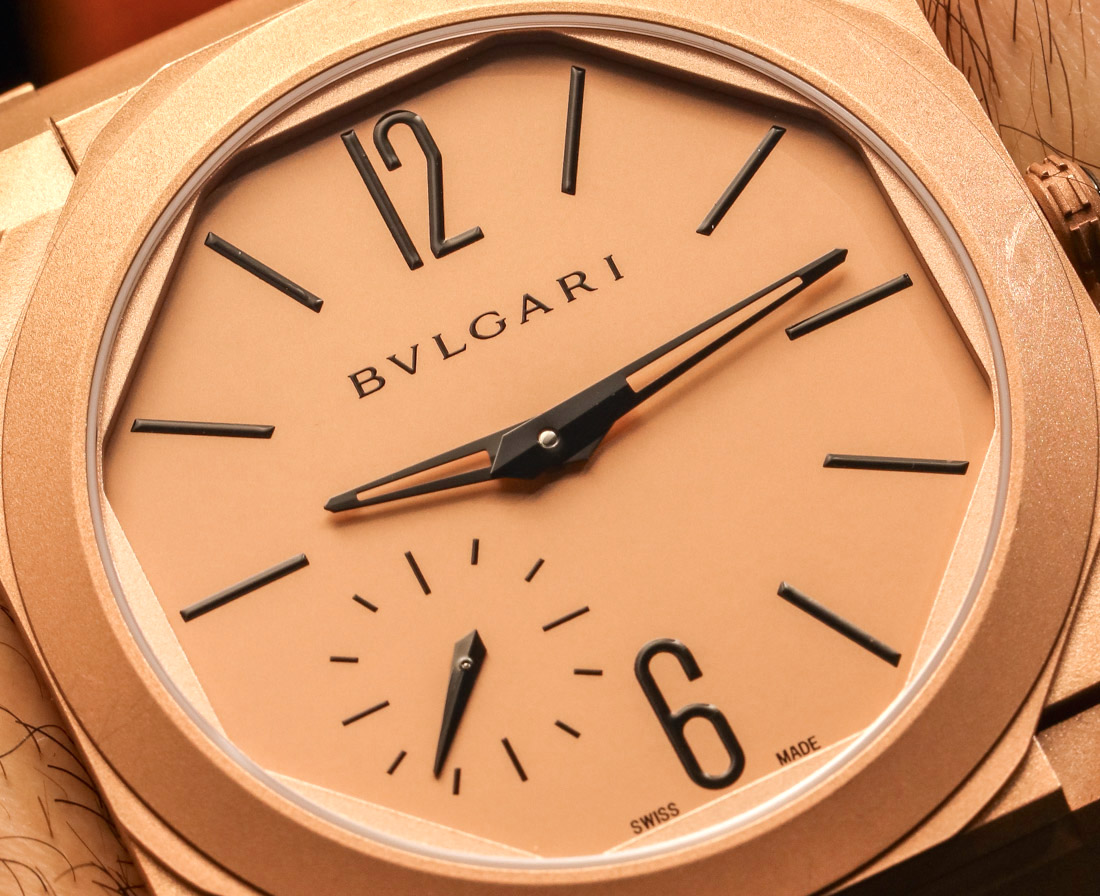 As the brand’s best-selling men’s watch, Bulgari has been quick to grow the Octo collection – particularly the Finissimo line (Italian for ‘finest’ and not to be confused with the standard Octo watches), wherein Bulgari reserves its most complicated executions. Despite being permutations on a similar theme, every new Finessimo watch offers just enough of a twist on the original on-wrist experience to keep things interesting, while maintaining the watch’s bold, Romanesque architecture and minimalist design language. 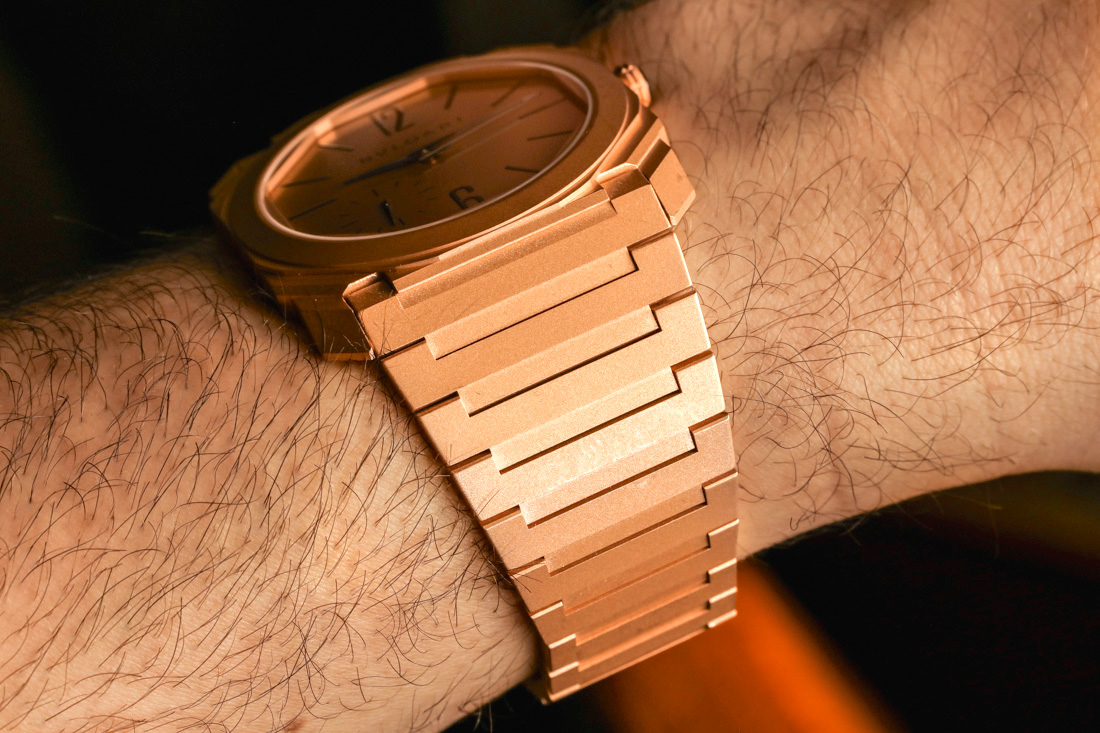 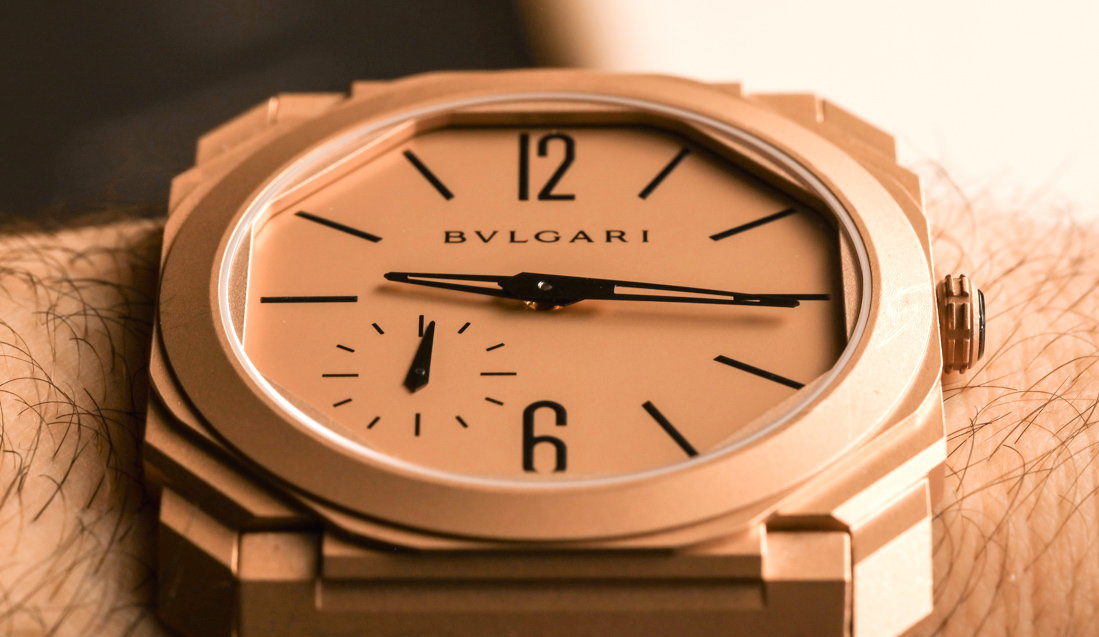 Now, when it comes to precious metals, while rose gold isn’t quite as stealthy as white gold, it’s also far from the ostentatious look you might get with the sharp contrasts of yellow gold. It also tends to blend better with warmer skin tones, so if you’ve written it off, it might be time for a second look. Especially with the Octo, which mutes the sheen of the gold a degree further by sandblasting the entire case and bracelet, yielding a subtly textured – but more importantly – matte finish that could very well disappear on the wrist were this on a leather strap. The effect is reminiscent of what Audemars Piguet has done with its ‘frosted gold’ Royal Oak, and ultimately quite cool on the wrist. 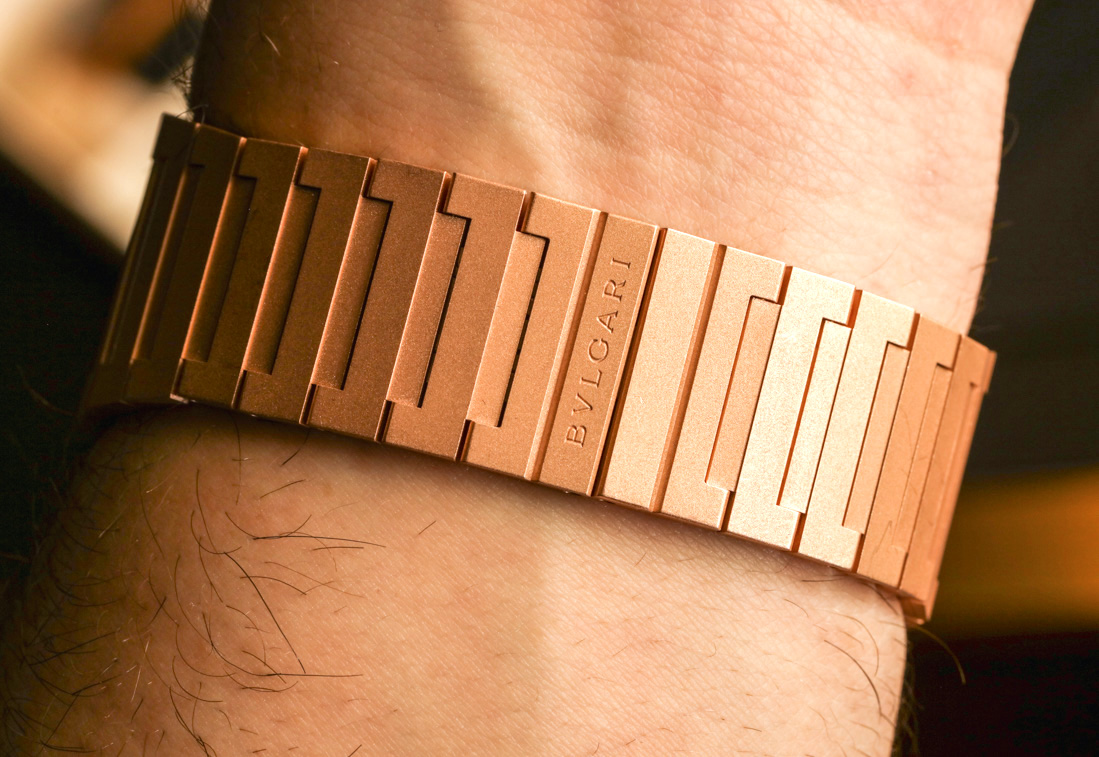 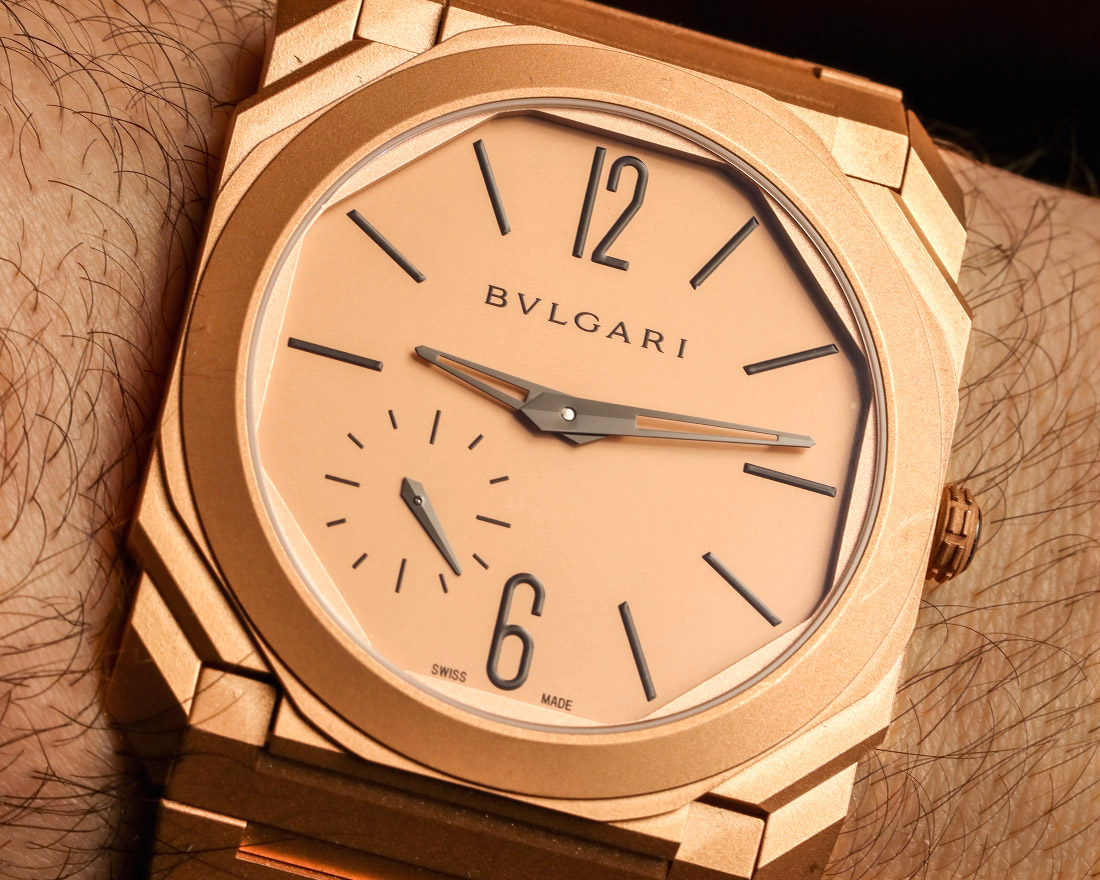 Introduced at Baselworld in 2018, this rose gold variant is the only precious metal offering between the three base Octo Finissimo watches on bracelet, joining the original titanium reference, and also-new stainless steel reference, respectively. Despite gold’s relative softness compared to both titanium and steel, this reference measurements are the same: its 40mm case measures a whisper-thin 5.15mm, which was good enough to make it the thinnest automatic watch in the world when the titanium variant was released. Granted, that record has since been re-claimed by Piaget, but the ultra-thin BVL 138 movement inside which enables the thin case design has been deployed here again, and it’s still no less a marvel than it was when we first saw it. 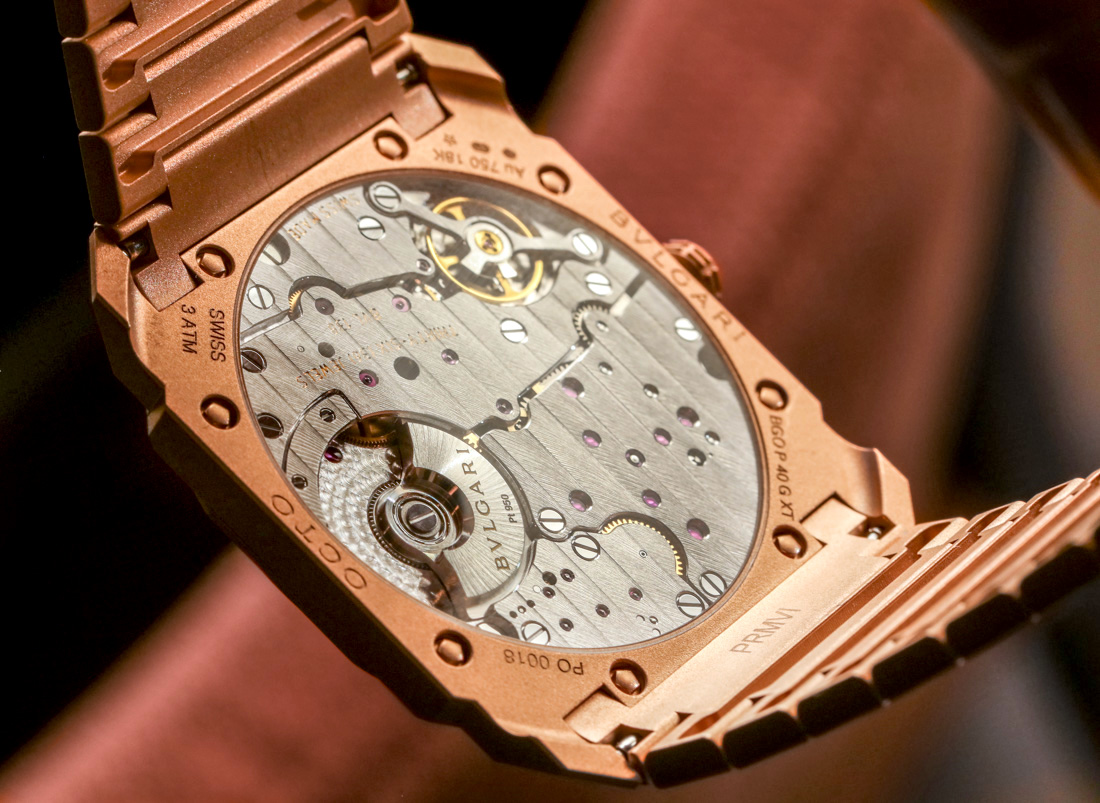 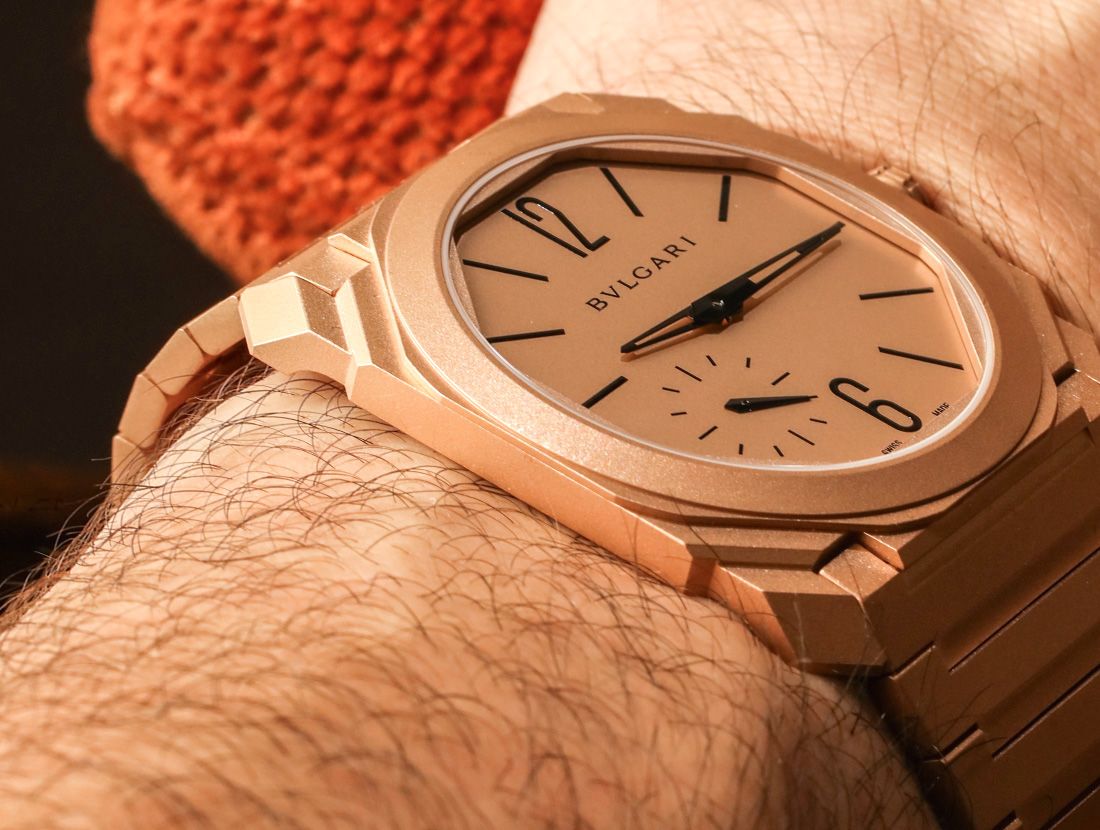 Measuring only 2.23mm thick, this movement exhibits beautiful hand-applied perlage, polished chamfers, and Geneva stripes galore. It also runs at the slightly lower frequency of 21,600 vph which in turn yields a 60-hour power reserve. But the real centerpiece (or ‘de-centerpiece,’ if we’re keeping score) is the off-centered micro rotor cast in platinum (likely deployed here for its added weight). Interestingly enough, it took Bulgari longer to develop this movement than the arguably more complicated tourbillon or minute repeater – both of which are manually-wound movements. 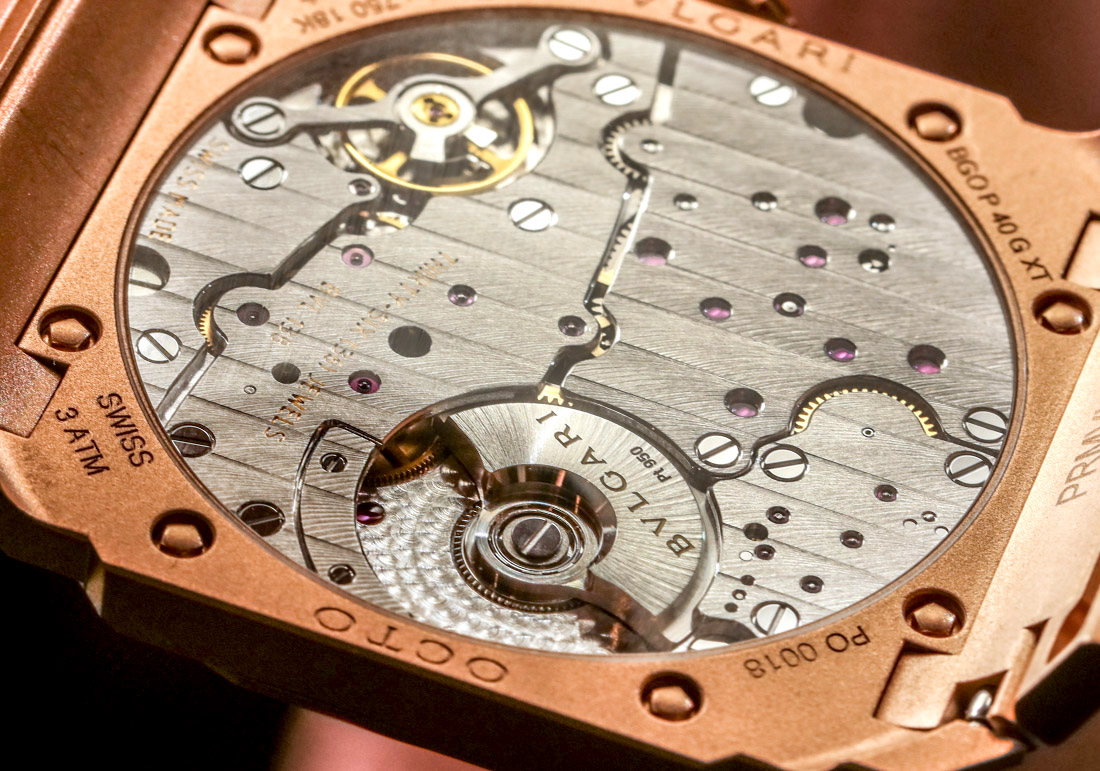 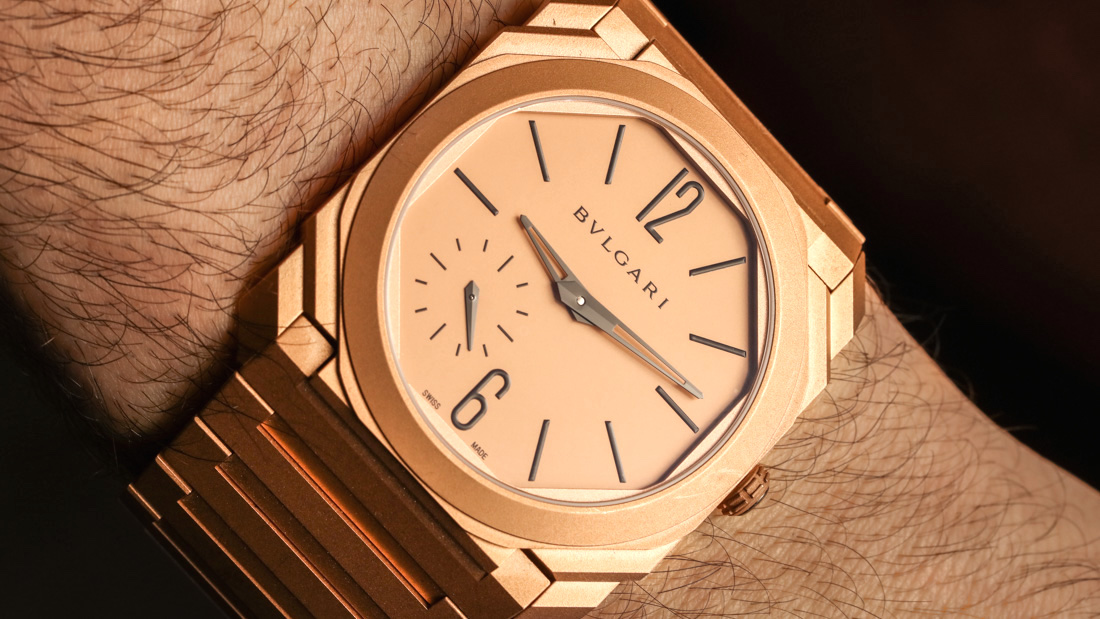 I’ve always thought it a shame that the Finissimo watches only carry 30 meters of water resistance, unlike the 100 meters found on the standard Octo watches. Something about an ultra-thin sports watch cast in either titanium or matte rose gold is both incongruous, and objectively awesome – and would dramatically heat up the staid design choices being made amongst many current luxury sports watch offerings. Especially with the full bracelet and added weight of the gold, this Octo feels striking and confident – as though it should be more capable than it subjectively is. But the eight-sided chassis is still a clear winner here, even if rose gold isn’t quite your thing. It wears broadly, but disappears on the wrist – even moreso if you’ve spent a few weeks on the sunny Tuscan coast. The Octo Finissimo in Rose Gold is priced at just over $47,000 USD and you can head over to bulgari.com for more.