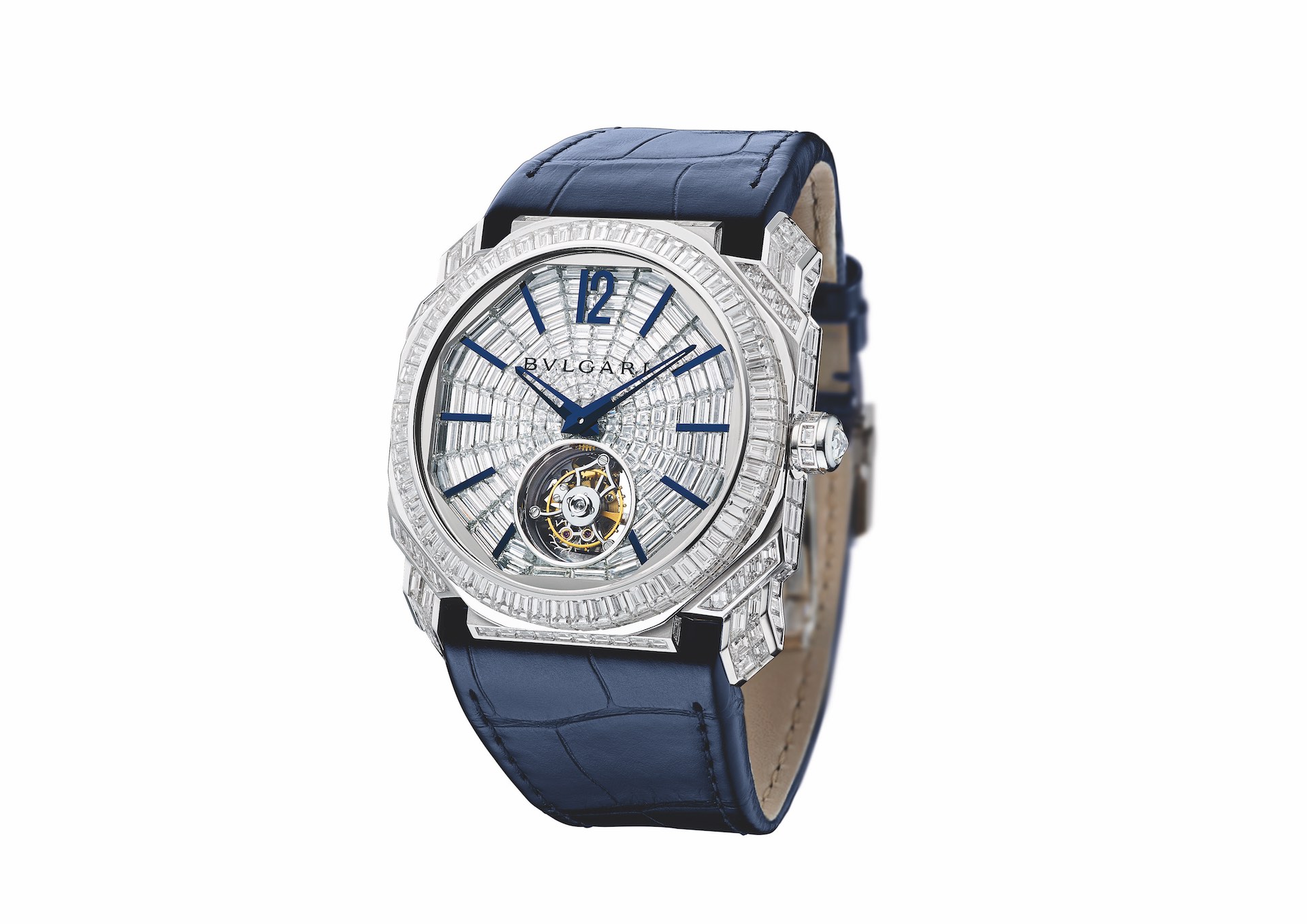 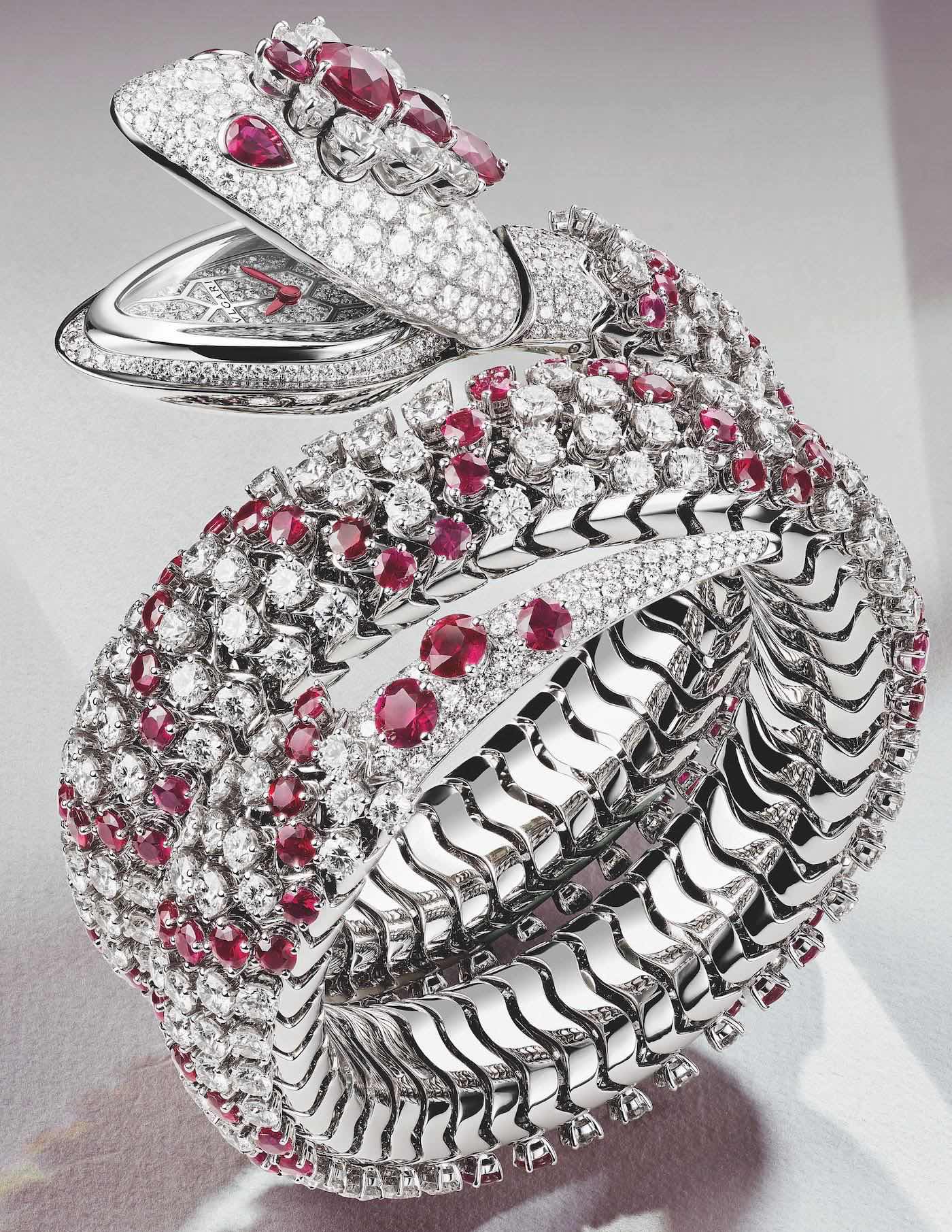 In this era of steel-sports-watch madness, it is such a pleasure to see a new collection of high jewelry watches, particularly one with options for men. There are two types of high jewelry watches: the design-focused sort that look like and are made like jewelry, and there is no mistaking that they are for women; and the “fully set” jewelry watch that usually is a little bigger, has a high level of complication, and could easily be worn by men. Bulgari demonstrated this distinction best in its debut of several new watches at an event in Shanghai in late September. The following six watches are set with a total of 123 carats of diamonds and 45 carats of sapphires and rubies. 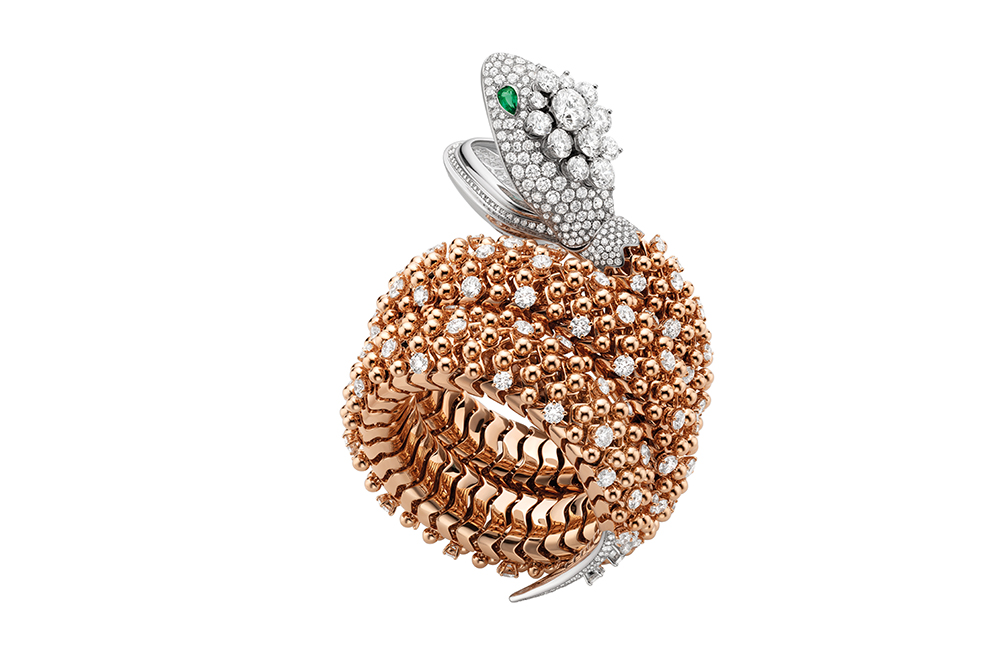 The new women’s design pieces include several new jeweled models in the Serpenti Misteriosi Pallini collection (I recently went hands-on with an existing watch in this collection), and these are quartz. If you’re looking at any of these watches from an investment point of view, by the way, don’t be discouraged by the quartz movement. Serpenti high jewelry watches are exactly the type of women’s watches that reign at auction. It is the sort of watch that holds its value because of its design and its carat count, rather than because of a special movement, provenance, or cult status: The Rolex Daytona, for example, may have a higher profile among male collectors but compared to the Serpenti, or certain other high jewelry watches signed by the likes of Cartier, Van Cleef & Arpels and a handful of others, it actually has a much lower intrinsic value. In a high jewelry watch, the jeweling adds real value, as does the design. In this case, the design is the serpent, which is to Bulgari what the panther is to Cartier. It is, incidentally, a symbol of eternity, wisdom, and seduction. In this new series, the gems include plenty of diamonds, rubies, and sapphires — the big three so-called precious gems next to which all others are referred to in the trade as “semi-precious.” 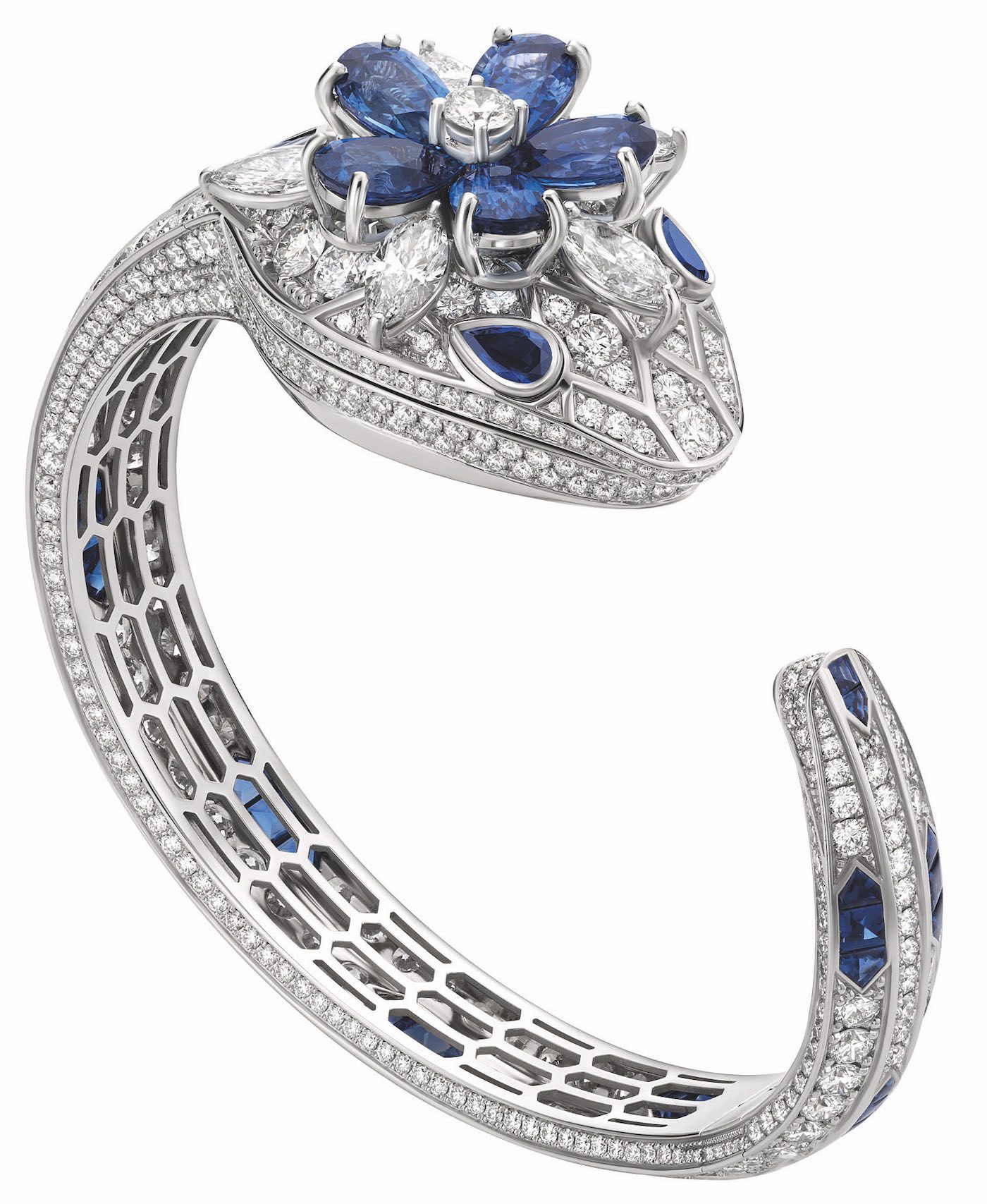 The Serpenti Misteriosi Pallin watches were inspired by a five-row Serpenti yellow gold and diamond secret watch from 1955. This new series is set with what appear to be crowns or hats on the serpent heads, the motif used on the case covers. They are beautiful (and also cute, in a muppet kind of way, when the mouths are open), but make no mistake, these are serious jewelry watches. The “Rubies” version is set with 132 rubies totaling 23.09 carats. The case, bracelet, tail, and dial are set with 676 diamonds weighing 38.3 carats. The two pear-shaped ruby eyes weight 0.62 carats. It is priced at 545,000 Euro (about $608,000). The “Diamond” version is 18k gold, set with just under 25 carats of diamonds. There is also a pair of single-wrap cuff-bracelet Serpenti Misteriosi secret watches, also with floral hats, one with 8.75 carats of pink sapphires ($316,000) and 16 carats of diamonds, and the other with 12 carats of blue sapphires and 15.7 carats of diamonds ($338,000). 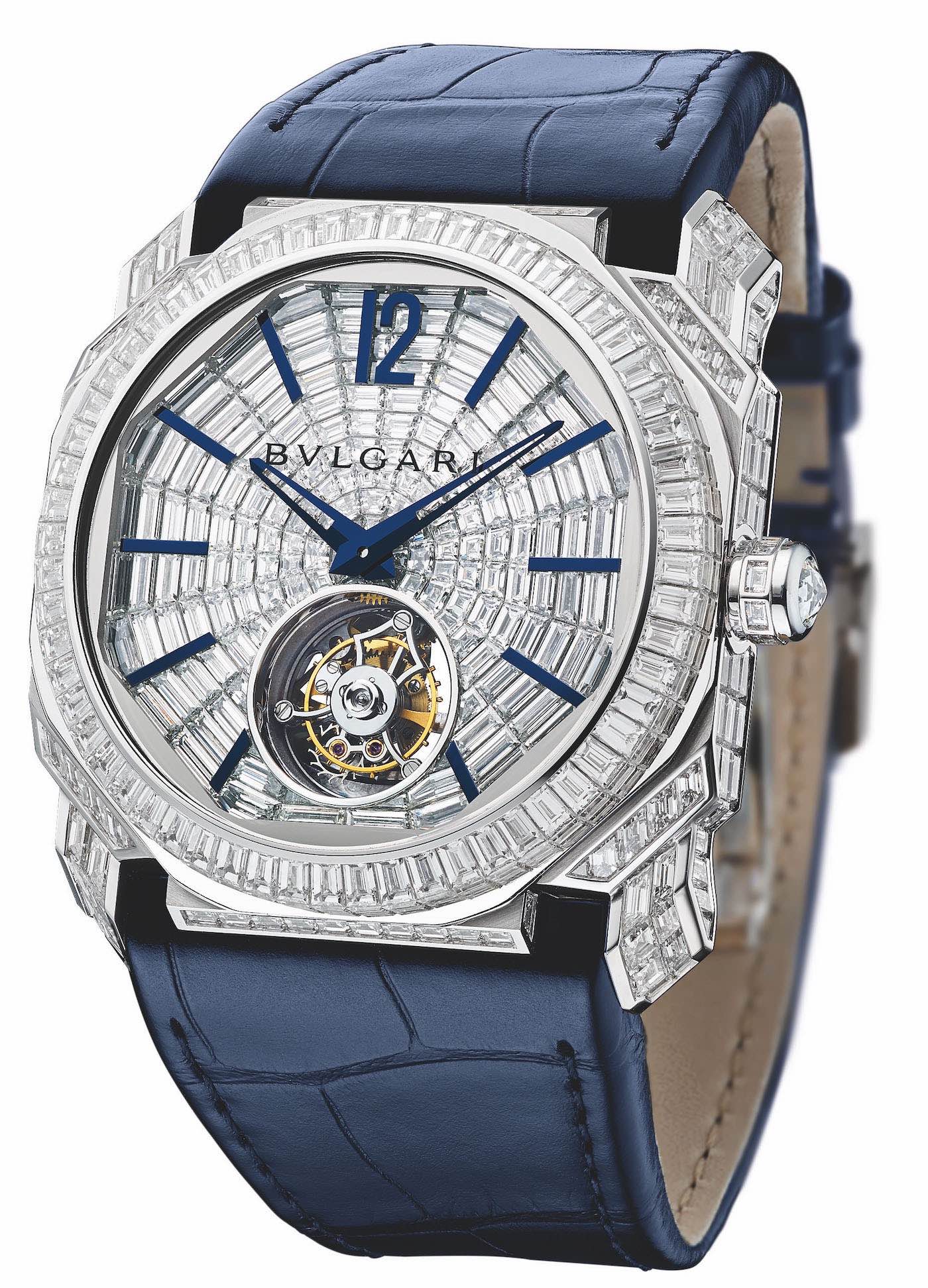 Two other gem-set releases are larger, more unisex, and contain Bulgari-made complicated movements. The Octo L’Originale Tourbillon Blue Full Baguette Diamonds contains the BVL 263 automatic tourbillon, and is set with 451 baguette-cut diamonds for a total weight of just under 20 carats. Priced at $708,000. 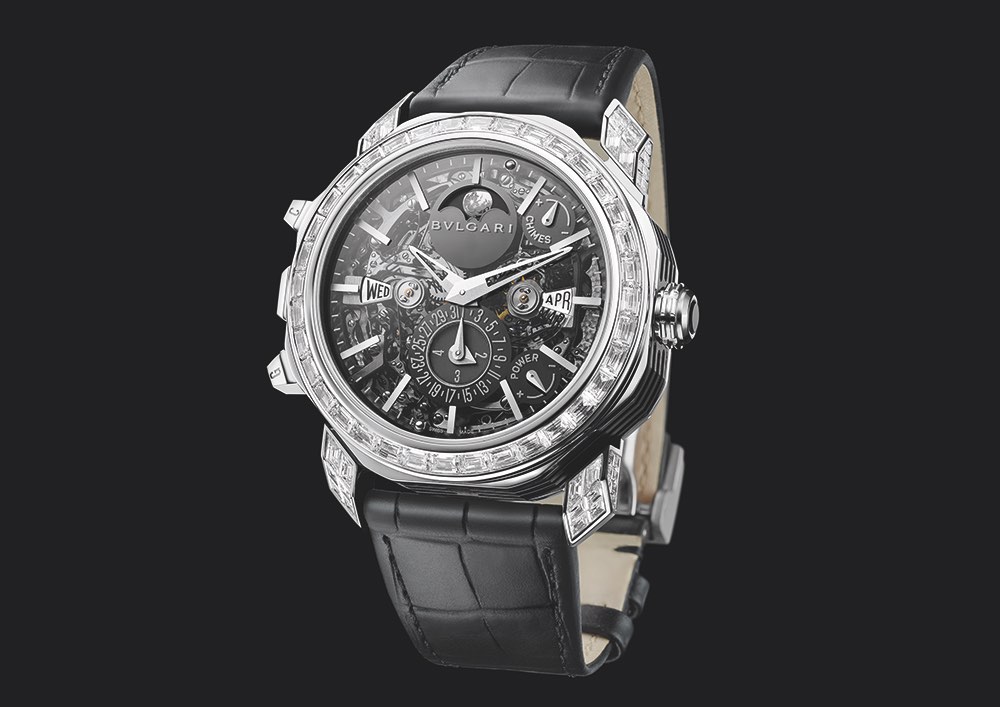 And finally, there’s the Octo Roma Grande Sonnerie with Perpetual Calendar in a special Shanghai edition loaded with baguette diamonds. The watch, which contains caliber BVL 980, was introduced earlier this year at Baselworld to commemorate the 25th anniversary of the first Grande Sonnerie created by Gerald Genta (now owned by Bulgari) in 1994. The 18k white gold case is set with 123 baguette diamonds totaling just under 8 carats, and a case middle made of titanium. It is limited to eight pieces, priced at $953,000. You can learn more at bulgari.com.