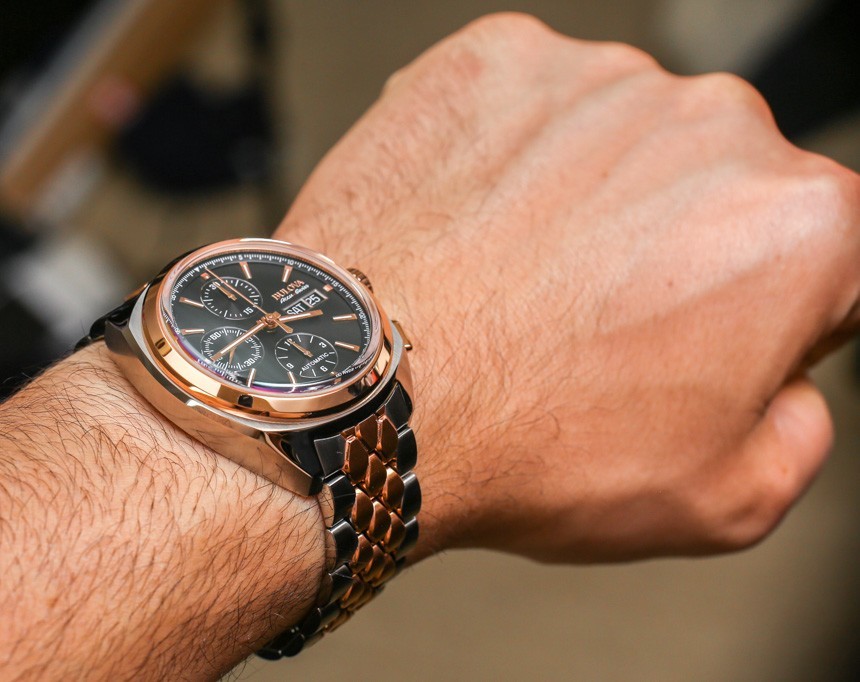 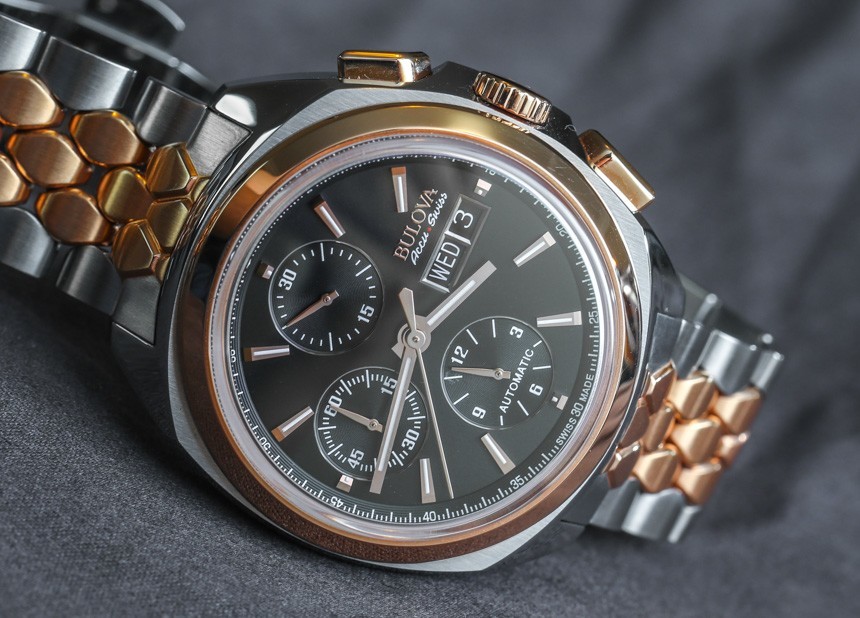 At the apex of today’s Bulova watch company is their Accu-Swiss collection of timepieces that contain Swiss mechanical movements. Here, Bulova offers timepieces with mostly classic inspiration, often being inspired by their own past and with a distinct focus on value. A good example is the bracelet of this particular Bulova Accu-Swiss Telc watch which is taken from vintage Bulova watches and reinterpreted for modern timepieces, and that also boasts a really comfortable fit. While Accu-Swiss watches have a discernibly mature personality to them, I do feel that given their relatively good value propositions, many Bulova Accu-Swiss watches will have a great appeal for emerging and aspirational watch buyers looking to get their first, or one of their first “good” mechanical watches. 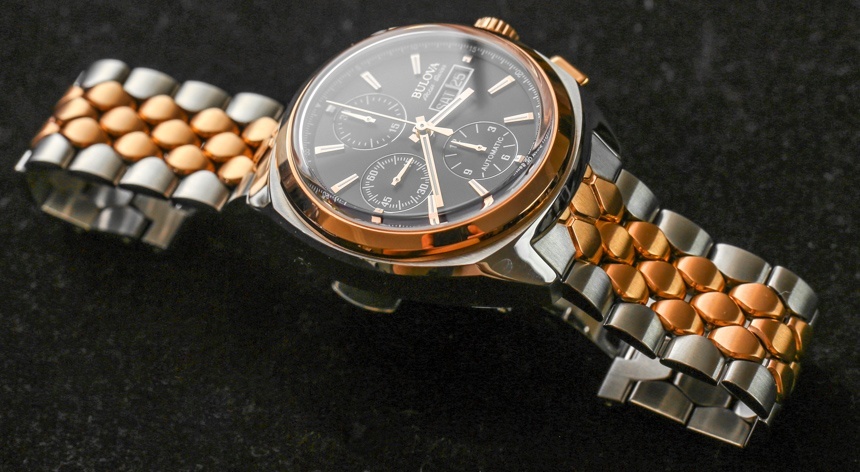 This particular Bulova Accu-Swiss timepiece is the reference 65B168 and happens to (in my opinion) represent a very handsome combination of colors and style. Interestingly enough – at least, as of right now – this is the only combination of movement and colors in the Bulova Accu-Swiss Telc collection, but I think future ones will come. This watch is in Bulova’s Telc collection and is actually among one of the rare chronograph versions. More so, currently, the average price of a Bulova watch is just a few hundred dollars, so the entire mechanical Bulova Accu-Swiss collection is actually rare in the context of Bulova watches.

That last point is actually rather important to me. Bulova is a brand that is widely sold – especially at department stores in the US. When speaking to Bulova’s President Greg Thumm recently, I commented that I liked the fact there are less common watches available from the brand. Even extremely rare versions. A great example is Bulova’s Accu-Swiss Percheron model in a solid 24k gold case (hands-on here). Priced at $42,000 and very limited in production, it exists at the absolute top of the brand ladder and is more than just another expensive gold watch, but rather, it is something special. From all that I can determine, Bulova is intent on continuing in this direction by having more mainstream products as well as very interesting watches which result from Bulova’s “mad scientist watchmaker leader.” 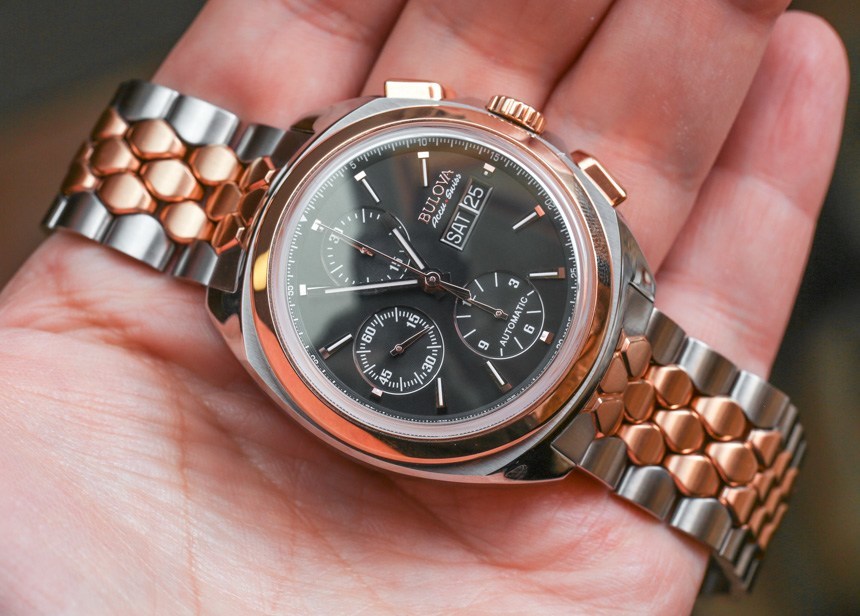 Normally, I wouldn’t go for a watch like the Bulova Accu-Swiss Telc Chronograph based only on seeing pictures of it. After having seen many thousands of watches, I’ve learned that I naturally gravitate toward choosing more interesting and experimental designs. I would probably consider the Bulova Accu-Swiss Telc to be handsome and classic, but a bit on the fashionably tame side, given its intentional restraint and conservatism. 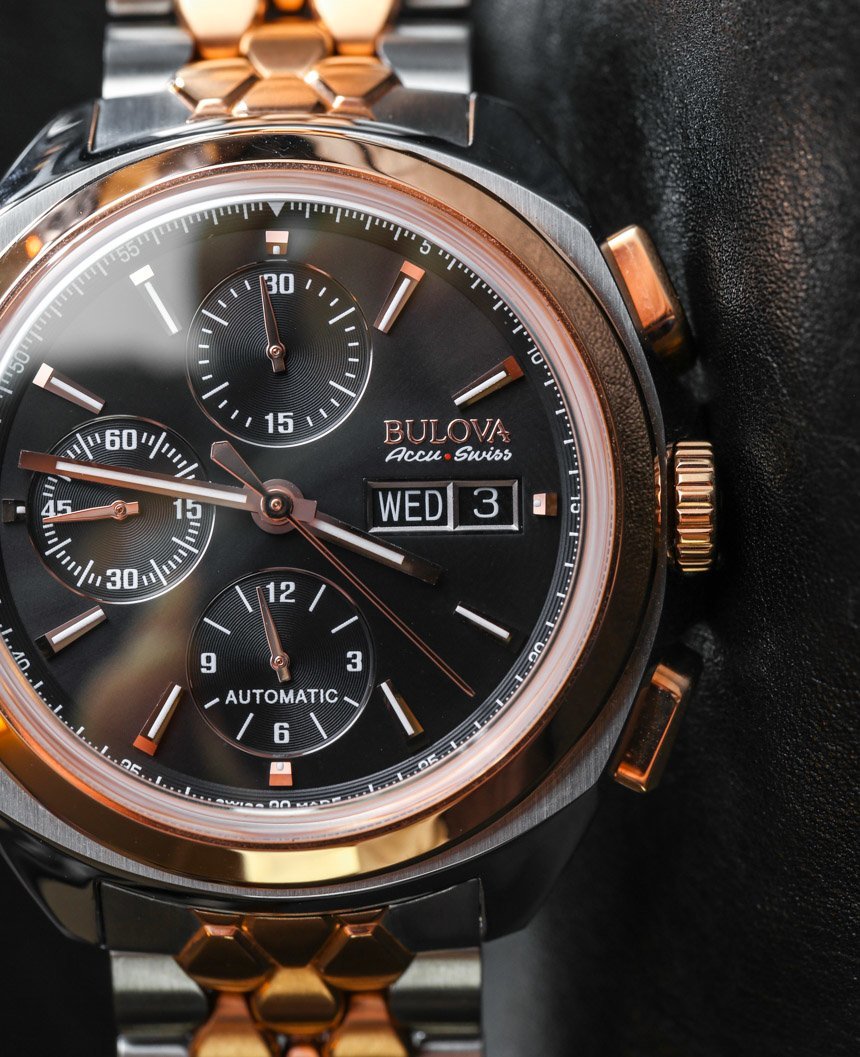 This is actually a very common issue in the watch world with all enthusiasts. Most of our first impressions of a watch are via pictures of the watch, and not even pictures on a wrist. This can often result in people coming to premature conclusions about a watch or even an entire brand that they might otherwise actually like if they got some hands-on time with the watches. I’ve personally experienced this a lot myself, but more so, I have introduced a lot of brands and watches to people (even aBlogtoWatch team members) that they did not realize would appeal to them until they saw them hands-on. 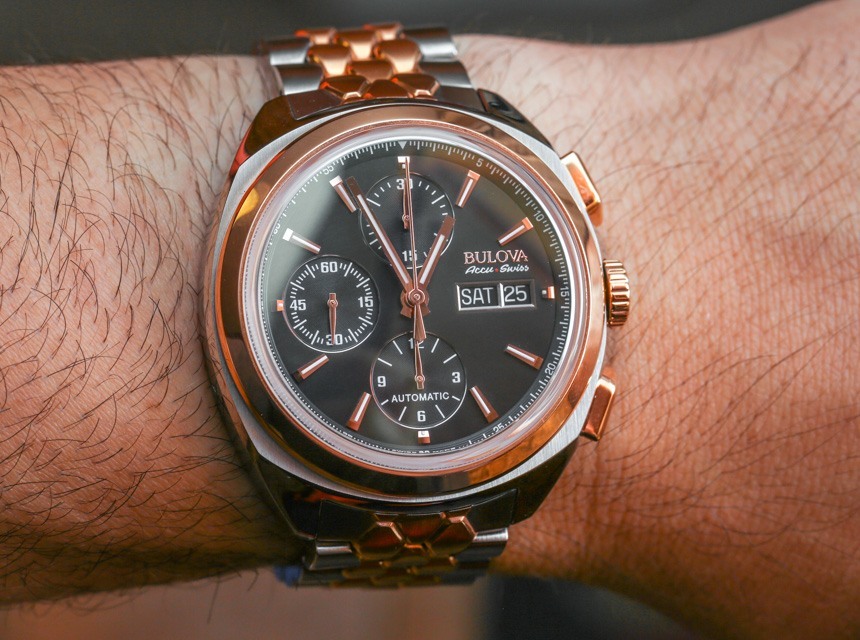 My experience with the Bulova Accu-Swiss Telc fits this example because it wasn’t until I got the watch in my hands and put it on that I admitted to myself, “that’s actually pretty nice.” The watch has a classic American style to it that feels as though it was born several decades ago (it is inspired by a Bulova watch design from the late 1960s), but in materials and construction, it is very modern. The sapphire crystal over the dial, for example, is shaped like a bowl – much like classic acrylic crystals – even though it is sapphire. 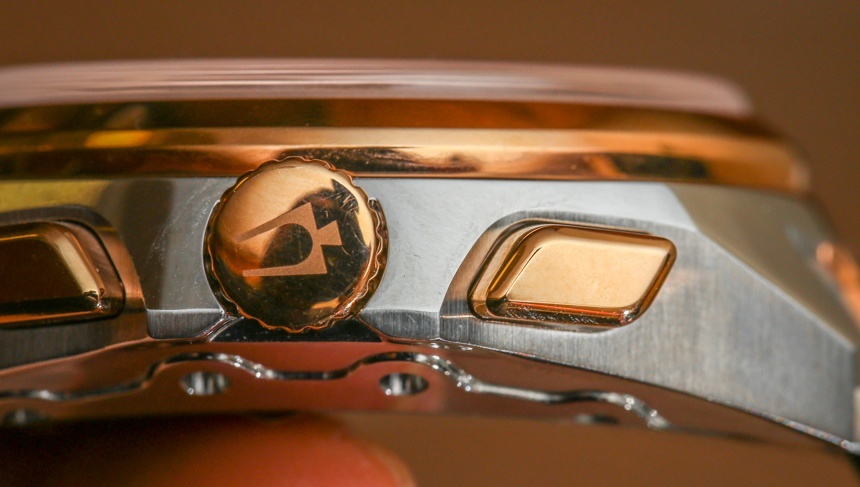 At 42mm wide, the Bulova Accu-Swiss Telc case has very short lugs, so it wears on the smaller side. It feels like a large 40mm-wide watch. The crown and chronograph pushers don’t really stick out which helps the case appear rather compact. With that said, the case is on the thicker side, at 16mm (well, perhaps about average for a timepiece that has a Valjoux 7750 inside of it), so it does have a welcome visual heft to it. 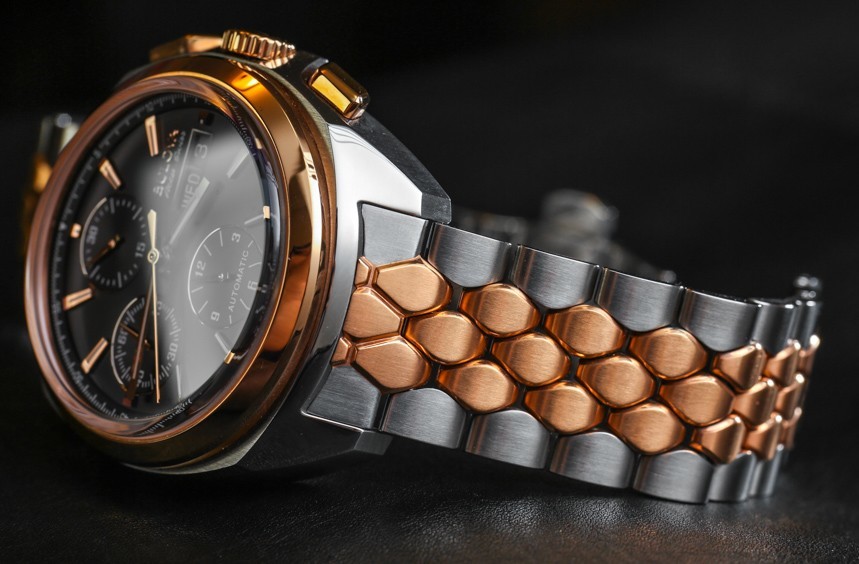 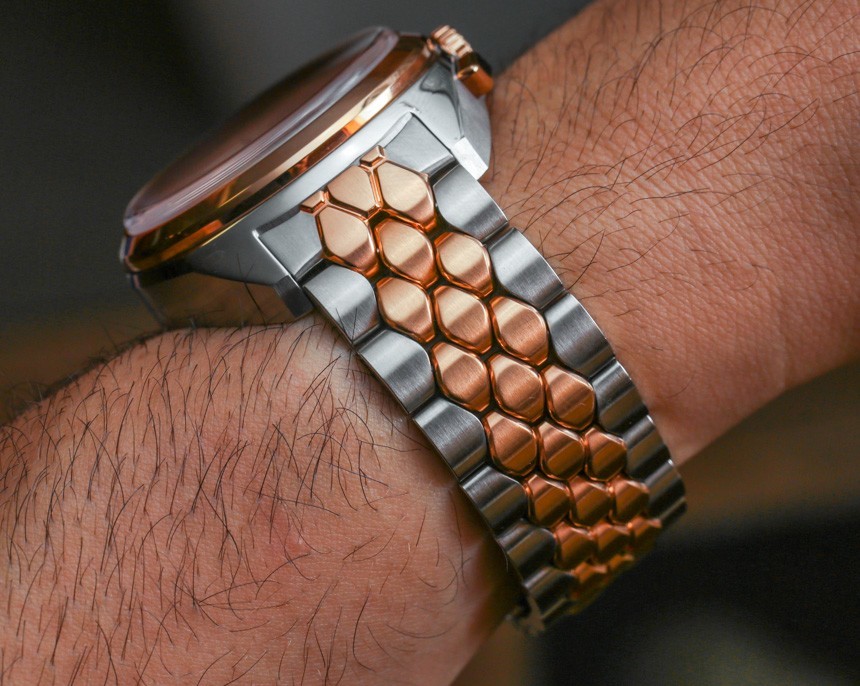 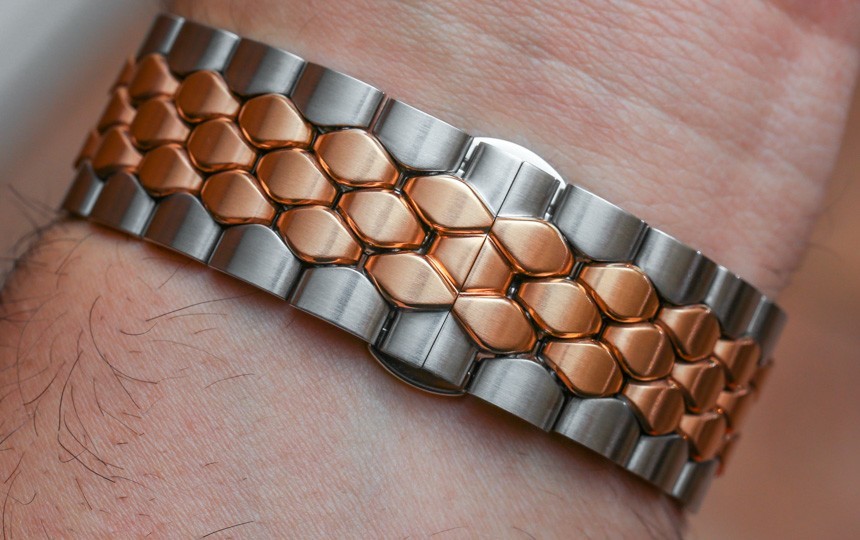 Bulova actually offers a version of this watch on a strap and not on the distinctive “scale-style” bracelet. You probably know what a fan of watch bracelets I am, so I would always recommend for people to get the available bracelet if one is available. Though, the strap on the Bulova Accu-Swiss Telc 65B167 watch does offer a different look. This bracelet style is one that you’ll find on a number of current Bulova watches and, according to them, is one that is inspired by a bracelet from the brand’s past. 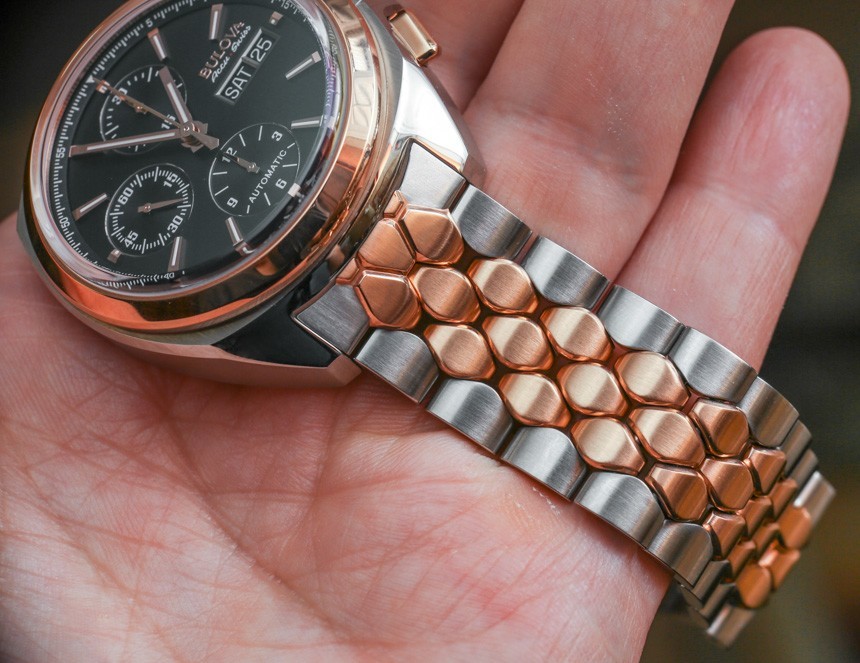 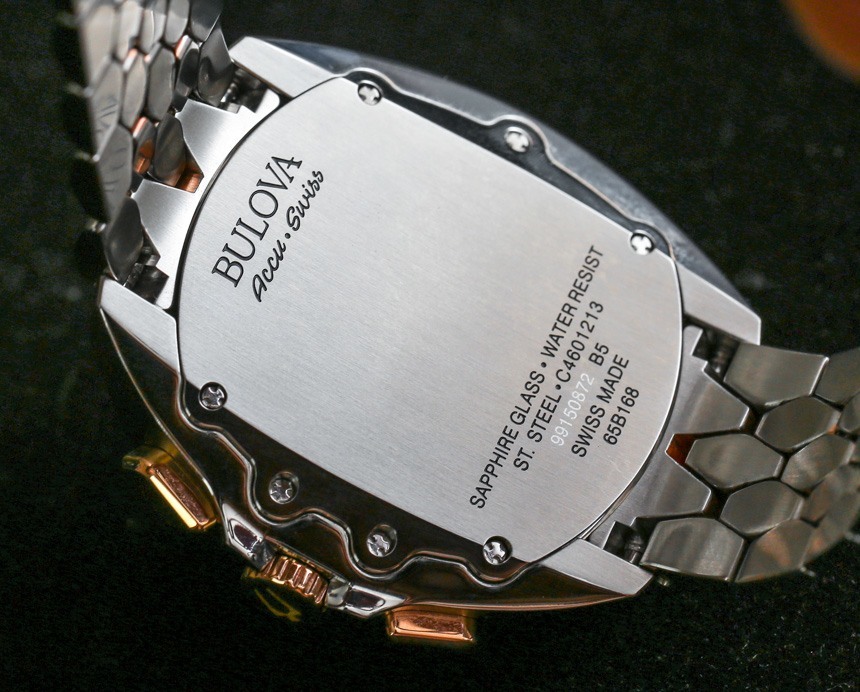 The first thing that I noticed about the bracelet was how thin the links are in relation to many other modern metal bracelets. You need to understand the very thick nature of the links in many modern watch bracelets is about style and a sense of conveying durability. The links don’t actually need to be that thick. So when I wear a watch with more traditionally thin links, I am reminded by how comfortable they are. The bracelet has a great fit on my wrist and has a butterfly style deployant clasp. The bracelet doesn’t, however, include a half-link, so in some instances, it is possible that people will have a watch that is either too tight or too loose. With that said, I am not terribly concerned about getting that precise a fit because the case is slightly curved and sits well on top of your wrist. That means even with a bracelet that is a bit loose, the watch will not necessarily feel loose. 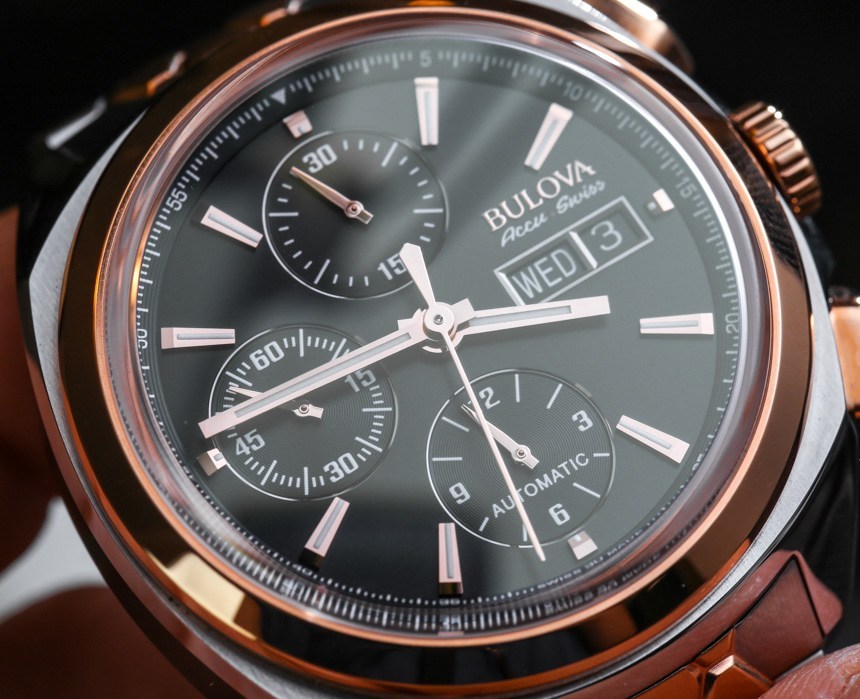 Dial legibility is something that I value greatly in evaluating a watch and the Bulova Accu-Swiss Telc is pretty good. I like the look of a high contrast dark dial with light indexes. Look closely at the dial, and you’ll notice slightly recessed subdials and a slightly glossy dark gray (almost anthracite) dial. On it are applied rose gold toned hour markers and matching hands. If not for the lume strips, the hands and indexes would be difficult to read but they are given matte lume strips which contrast very well with the darker, polished elements of the dial. You get some of that sparkle that a lot of people like on a dial with the addition of satisfactory legibility. 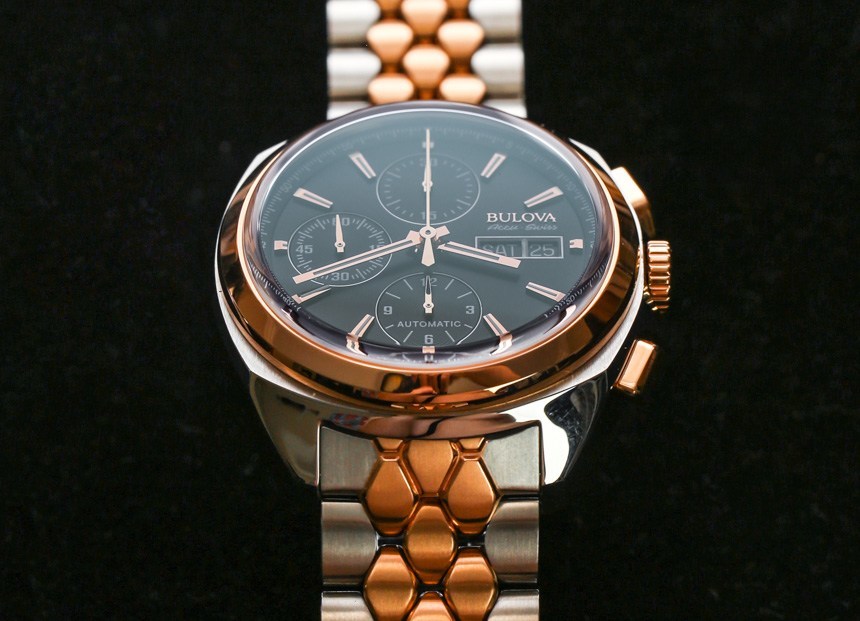 The dial offers the time with date and day of the week windows as well as a 12-hour chronograph. This is thanks to the Swiss ETA Valjoux 7750 automatic chronograph movement inside. Its a common, albeit very effective mechanical movement that might not excite seasoned watch lovers but shouldn’t let you down. The watch doesn’t have an exhibition caseback window – which might have been nice – but I don’t really miss it. You can also notice by the construction of the case that a caseback window might be more difficult to include. The case is “water resistant,” but I am not sure to how deep. I am guessing 30-50 meters – so this isn’t a sport watch. 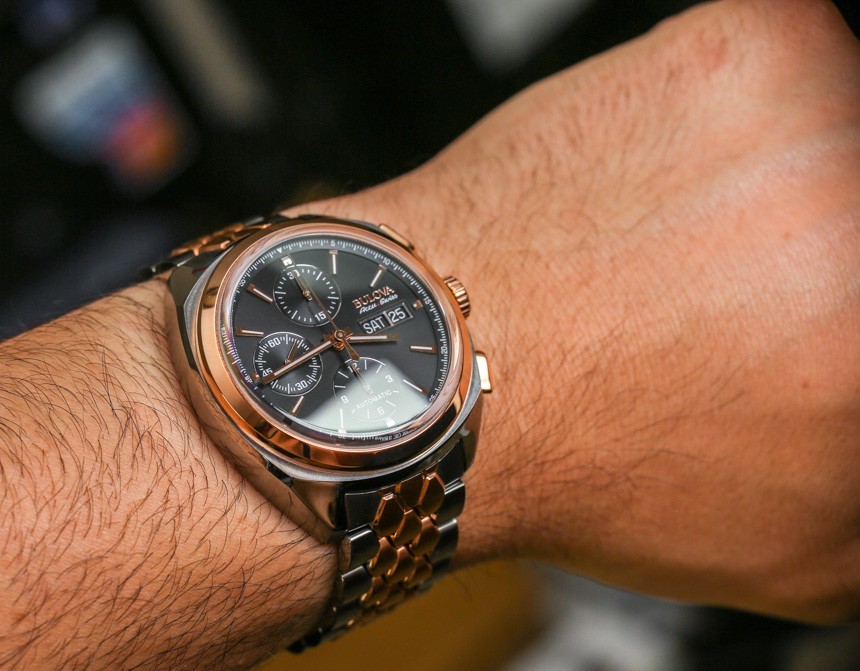 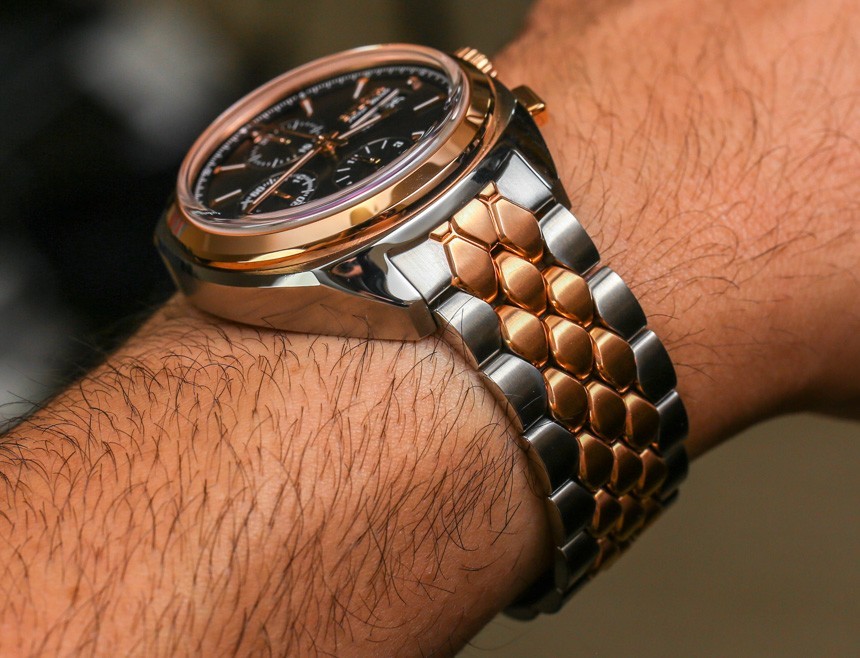 I find the Bulova Accu-Swiss Telc in this configuration to be surprisingly stylish and versatile. Someone I asked commented that it is the type of watch that could look good with a range of outfits and on a range of men. Bulova is clearly aiming toward a degree of classic style that is meant for daily wear (or regular wear), but without being boring. I do agree that there is a classic but also avant-garde quality to the design that most certainly doesn’t look like a lot of other watches out there. With products such as this, I get the impression Bulova wants you to know their watches aren’t trying to be polarizing in their design, but at the same time distinct. I can tell you that such a goal isn’t easy to accomplish. 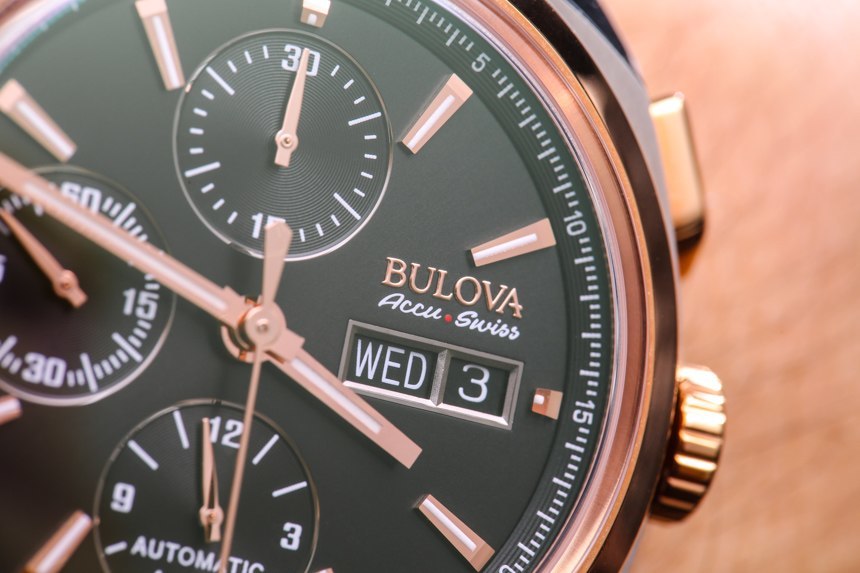 So the final question is whether or not the Bulova Accu-Swiss Telc Chronograph is an ideal watch for timepiece lovers or a good watch for people who aren’t in the game of buying watches and following the world of horology. That is a good question that is difficult to answer. My instinct tells me that the watch is good enough to satisfy watch snobs – especially for the price – but that Bulova still has a little ways to go in reaching the serious collectors looking for pure novelty. Then again, that population is very small, and I could easily recommend the Bulova Accu-Swiss Telc 65B168 for any watch lover who is taken by the looks. Perhaps the watch’s proudest moments are when I wear it around members of the Swiss watch industry who are curious to know what it is and then when inspecting it remark that “Bulova is doing nice things,” and that “this isn’t bad at all.” Retail price for the Bulova Accu-Swiss Telc 65B168 watch is $2,395. bulova.com

Necessary Data
>Brand: Bulova
>Model: Telc reference 65B168
>Price: $2,395
>Size: 42mm wide
>Would reviewer personally wear it: Yes
>Friend we’d recommend it to first: A great gift for anyone who doesn’t have a good watch and wants one. Design lends itself well to various situation and there is a lot of watch for the asking price, so more budget conscious watch lovers should take notice.
>Best characteristic of watch: Great value for the money in terms of overall fit, finish, and design. Very versatile and timeless “mature” design.
>Worst characteristic of watch: Despite good value for money, many people aren’t currently accustomed to $1000-plus Bulova watches. Some people might consider the case to be a bit thick.