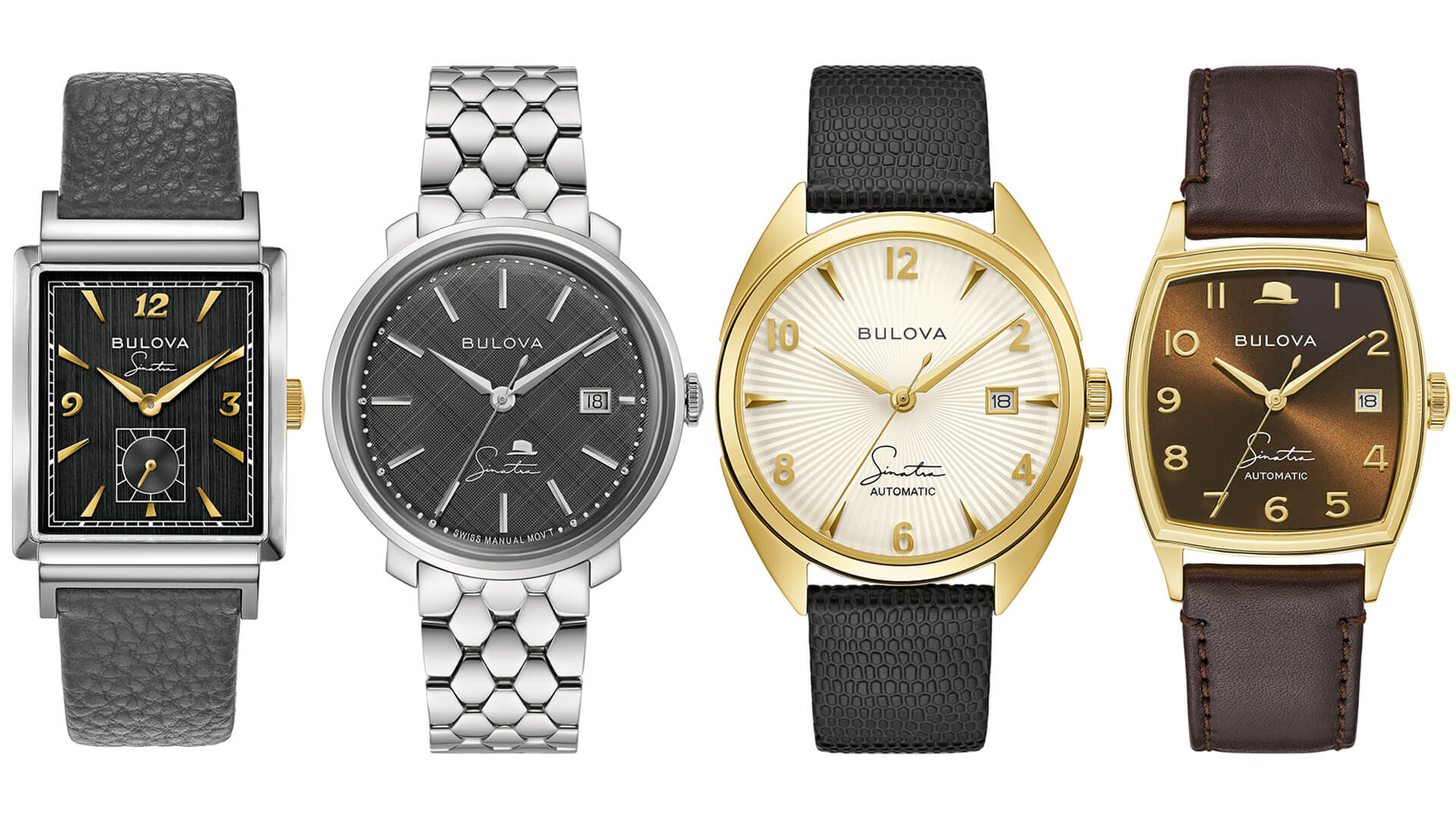 With a long history of partnering with the music industry, Bulova is no stranger to artist inspired timepieces. For its latest collection, the brand has channeled one of its most famous and longest lasting partnerships, creating a series of four new models inspired by the songs of the great Frank Sinatra. Bulova’s association with “Old Blue Eyes” dates all the way back to a title sponsorship for “The Frank Sinatra Show” on television in the 1950s, and Sinatra continued to wear Bulova on many occasions throughout his life. The four models celebrating this partnership in the Bulova Frank Sinatra Collection include the rectangular Bulova My Way, the trio of Bulova The Best is Yet To Come variants, the smaller and more discreet Bulova Fly Me To The Moon, and the tonneau style Bulova Young At Heart.

The first of the models in the Bulova Frank Sinatra Collection, the Bulova My Way, starts with an Art Deco style rectangular stainless steel case sized at 29.5 mm by 47 mm. Finished in either polished stainless or gold tone, the plan view of the case is dominated by the prominent C-shaped attached lug assembly at each end, adding some visual depth to an otherwise flat design. This case is further embellished with a handful of Sinatra signature touches, with the signed crown featuring Frank Sinatra’s hat logo along with a specially engraved caseback. The dial of the My Way doubles down on this early 20th century Art Deco aesthetic, with swooping applied Arabic numerals in gold tone accenting simple pointed indices and alpha hands over a heavily brushed base dial in either black or silver. The geometric pattern surrounding the 6 o’clock sub seconds further adds to this impression, while the Sinatra signature beneath the old style printed Bulova logo announces the My Way for what it is. The other major break in this retro illusion comes under the hood, in the form of the Miyota 1L45 quartz movement. While cost effective, the unmistakable quartz ticking of that sub seconds hand certainly shatters the old-school illusion somewhat. Bulova offers the My Way on a pebble grained unstitched leather strap in either black or gray, finished with a signed butterfly clasp. 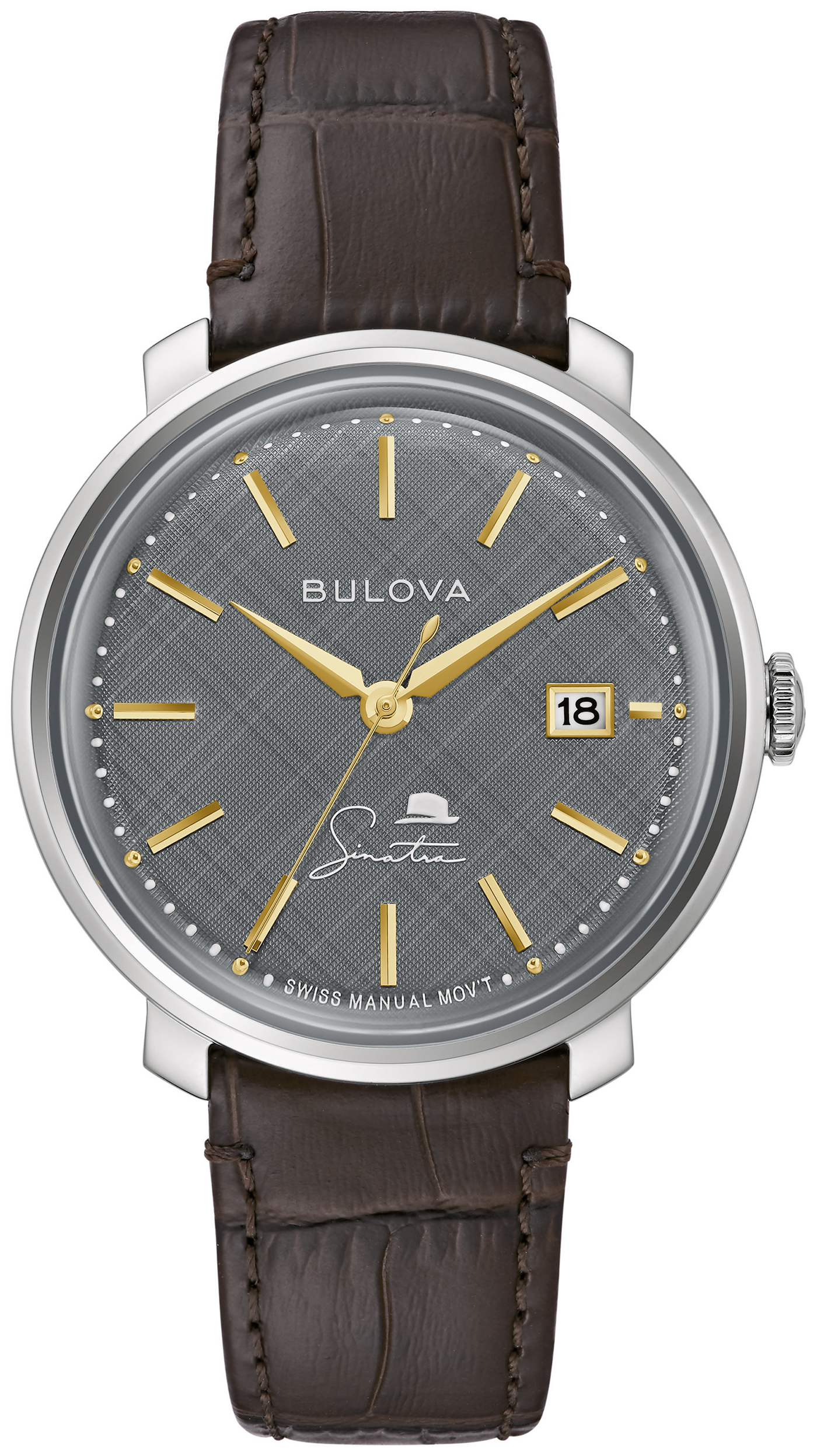 The slim Bulova The Best is Yet To Come series takes a clean and minimal approach, featuring a 40 mm round case in either polished or gold tone stainless steel. The narrow bezel and brief lugs give this one a compact, nearly all-dial appearance, allowing Bulova’s unique dial texture work to take the fore here. Three dial variants are on offer, all sporting simple applied baton indices, alpha hands, and an outsize Sinatra signature at 6 o’clock. The most traditional of the bunch is the champagne honeycomb dial option, which coupled with gold tone hands and indices gives this a certain ‘50s-dressy warmth. The graphite gray dial versions, available with either gold or steel hardware, add a further layer of texture to this honeycomb surface with the use of an underlying crosshatch pattern reminiscent of tweed. It’s a subtle effect, but one that definitely sets these dials apart. For the The Best is Yet To Come, Bulova opts for a handwound Sellita SW215 movement, visible through a sapphire display caseback. The finishing touch for the Bulova The Best is Yet To Come is either an alligator pattern leather strap in gray or black leather, or an optional coffin link bracelet in stainless steel. 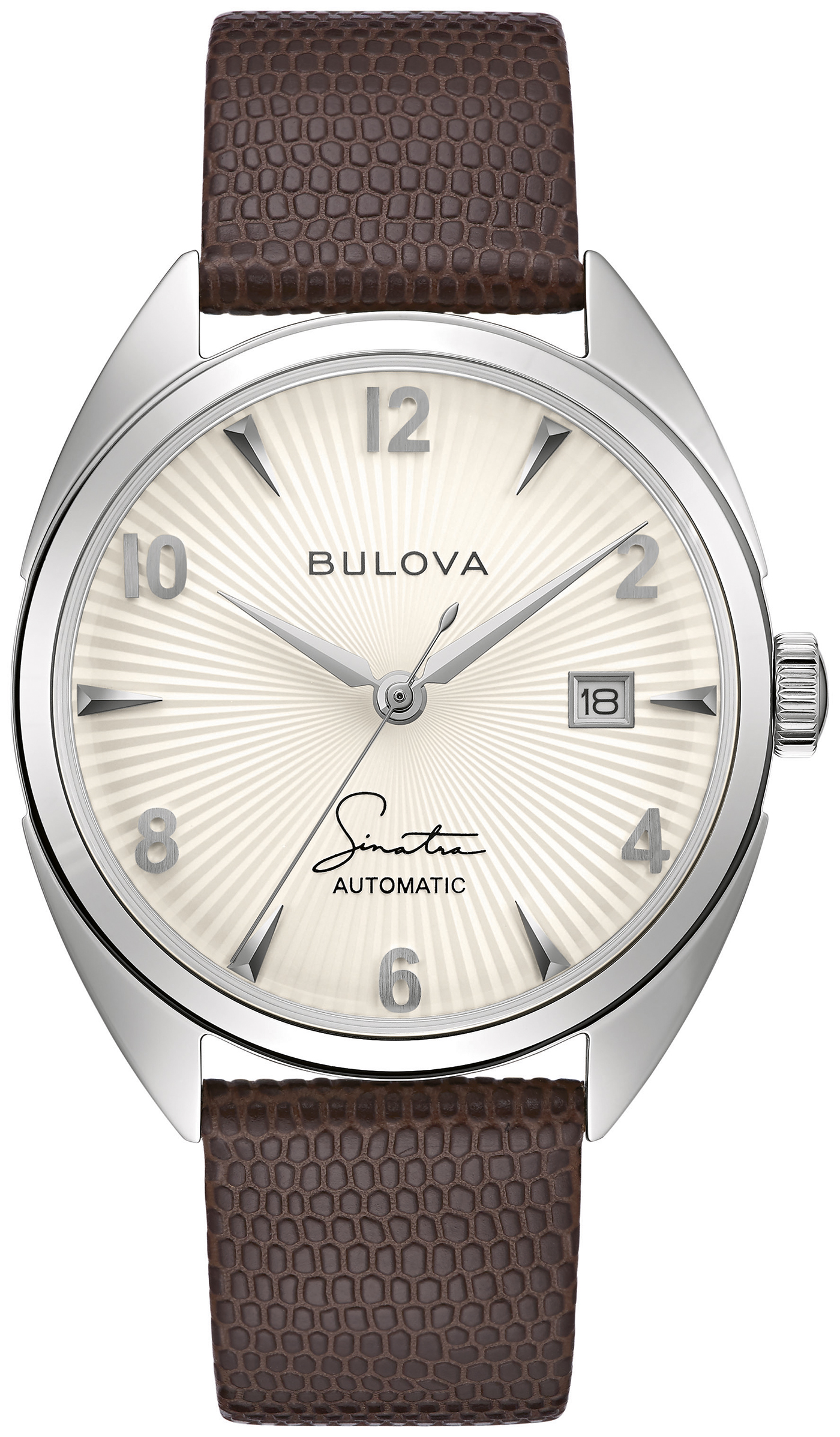 The third model in the collection, the Bulova Fly Me To The Moon, moves the stylistic inspiration a bit further into the early ‘60s with a 39 mm rounded case design reminiscent of the classic ‘60s “C-Case” Omega Constellation. Once again available in both stainless steel and gold tone, this flowing rounded design feels timeless and refined. The dial of the Fly Me To The Moon, available in either white or black, uses a mix of applied faceted triangular indices and applied Arabic numerals, in either steel or gold tone. Most striking, however, is the dial surface itself, which features a ribbed sunburst pattern that feels more than a bit like the Seiko Presage ‘Cocktail Time’ in its execution. The Bulova Fly Me To The Moon is one of two in the Frank Sinatra Collection to feature an automatic movement, in this case a Miyota 8215 automatic visible through a display caseback. Bulova takes a slightly different approach for strap choice with the Fly Me To The Moon, offering brown or black leather with a rather uncommon lizard pattern.

The Bulova Frank Sinatra Collection rounds out with the Bulova Young At Heart. Starting with a gold tone tonneau case sized at 33.5 mm by 45 mm, the Young At Heart feels at once like the most modern of the group and the most overtly Sinatra-branded. This is mostly due to the dial, with a dual shot of branding via the signature at 6 o’clock and the Frank Sinatra hat emblem becoming the applied gold tone 12 o’clock index. The rest of the dial is cleanly restrained, with alpha hands paired with airy applied Arabic numerals. The dial finish itself is a bright sunburst in either silver or a warm whiskey brown, both of which suffer slightly due to the inclusion of a stark white date wheel at 3 o’clock. Bulova powers the Young At Heart with the same Miyota 8215 automatic movement used in the Fly Me To The Moon, again shown through a display caseback here. The Bulova Young At Heart keeps things simple in terms of strap choice, offering untextured leather in black or a deep mahogany brown. 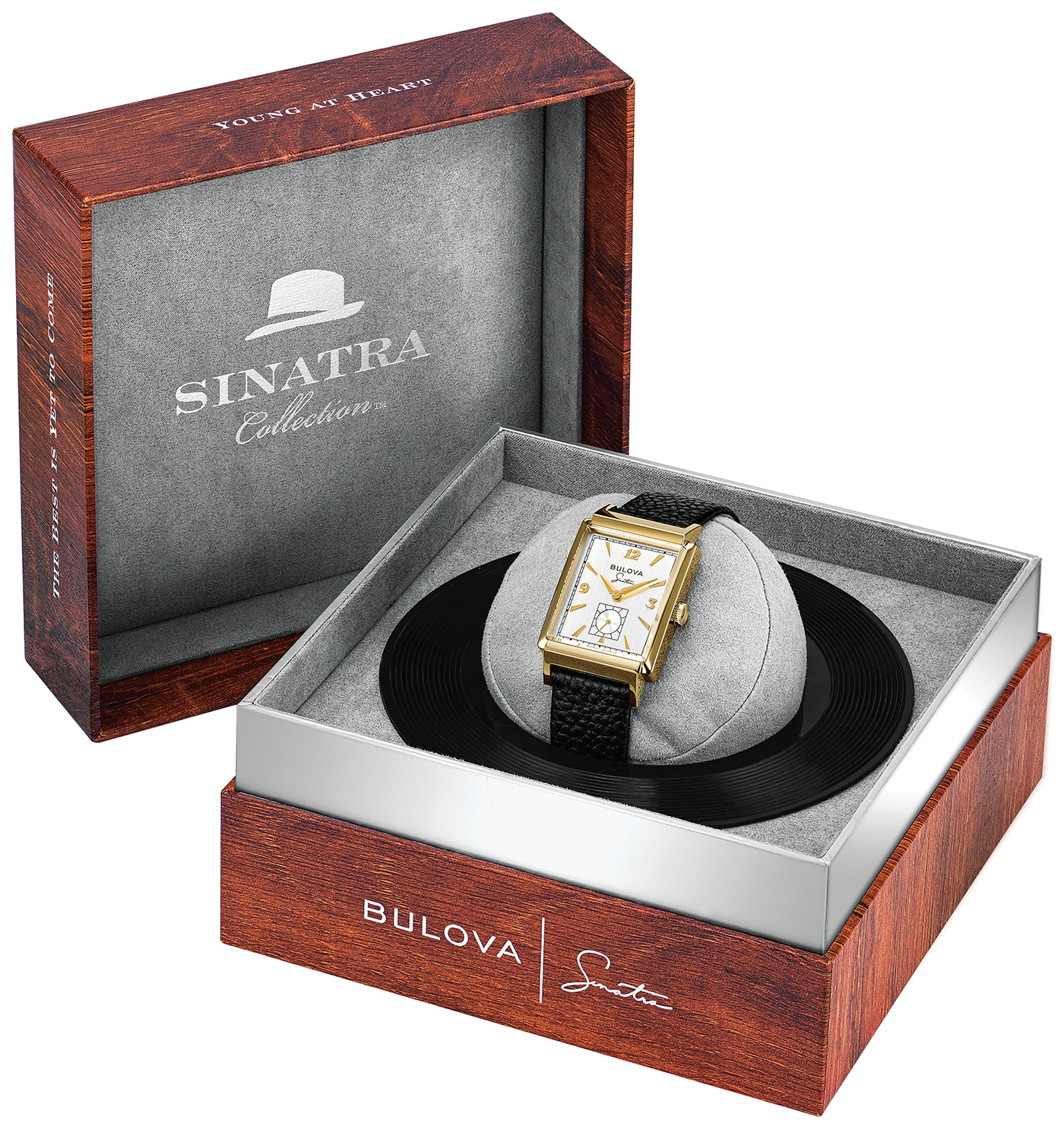