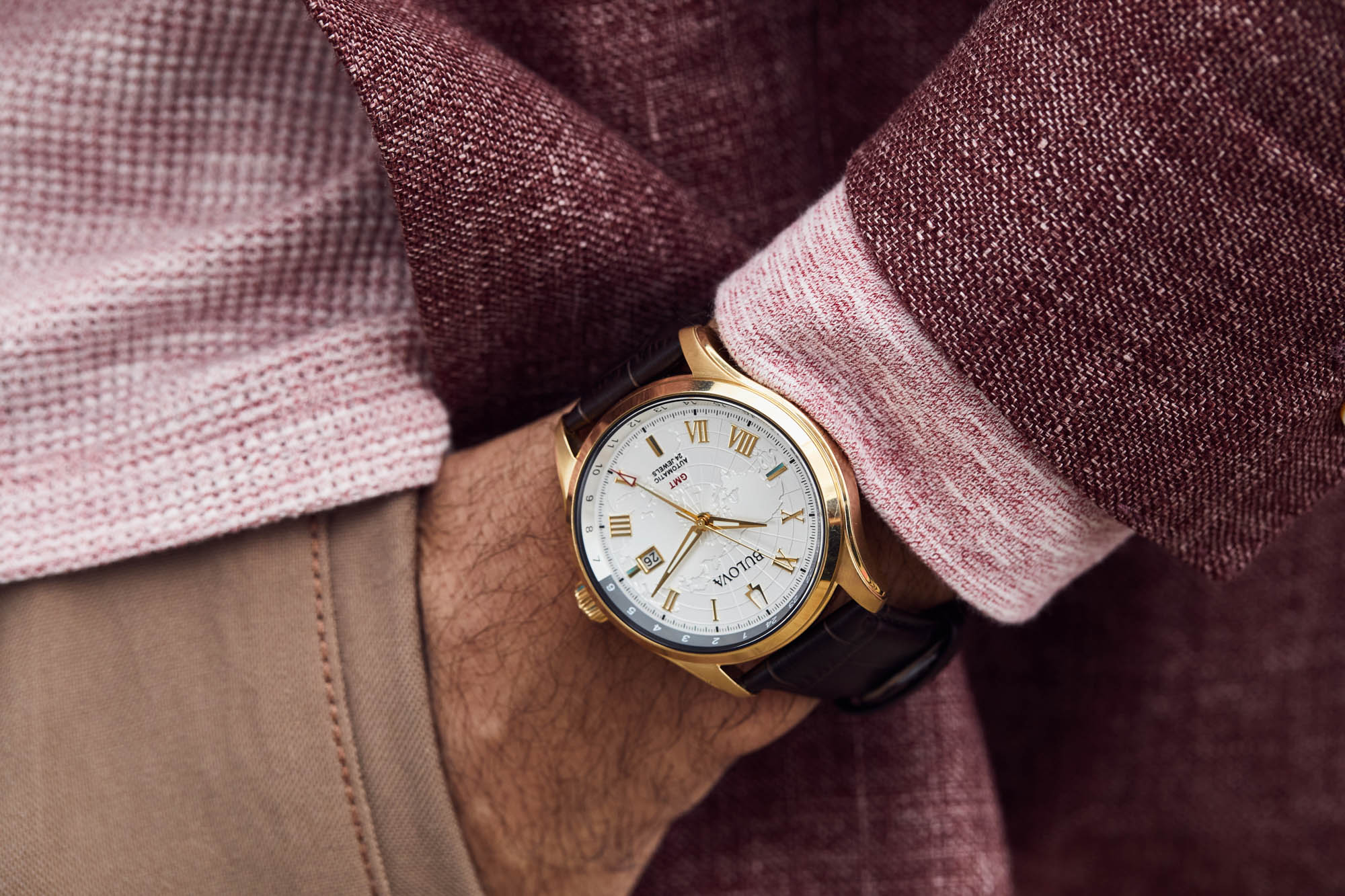 For a number of years, budget-friendly mechanical GMT watches were somewhat few and far between, but Bulova has just brought down the price floor for true GMT watches with a new model powered by a movement from Miyota that could have a massive impact on the affordable end of the watch industry. GMT watches are widely considered to be one of the most practical types of timepieces, but options for “true GMT” watches that allow their local 12-hour hands to be jumped forwards or backwards in one-hour increments have typically cost a minimum of a few thousand dollars. However, all of that has been changing in more recent years, and alongside additional affordable options from Switzerland, Japan has now also entered the GMT movement market. The new Bulova Classic Wilton GMT offers a dressy take on the concept of a dual-time zone travel watch and most importantly, it is now the most affordable true GMT watch currently available. 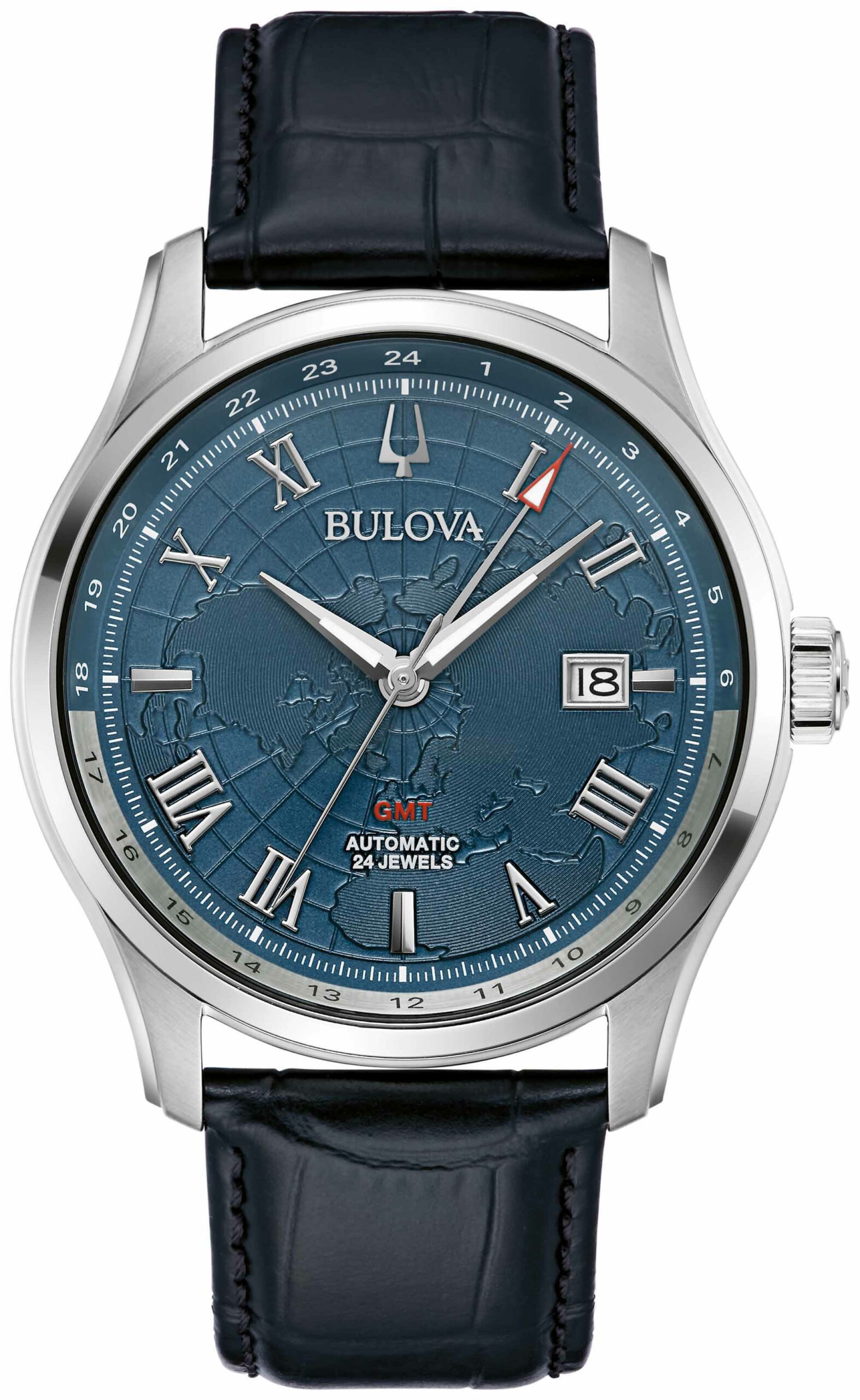 The case of the new Bulova Classic Wilton GMT is made from stainless steel and measures 43mm in diameter with 22mm lugs. Available in either plain stainless steel or with a gold PVD finish, the case of the Wilton GMT features brushed and polished surfaces with a simple smooth bezel, a signed push/pull winding crown, and elegant recessed bevels running the length of its lugs. Additionally, since it follows more of a dress watch overall design, the Bulova Wilton GMT does not have any crown guards and offers a much more refined appearance than what you get with the sport watches with GMT complications, which typically have their 24-hour scales printed upon their thick rotating bezels. Sitting above the dial of the Wilton GMT is a domed sapphire crystal with anti-reflective treatment, while a simple screw-down display caseback offers a view of the self-winding Miyota GMT movement and helps provide the watch with 30 meters of water resistance. 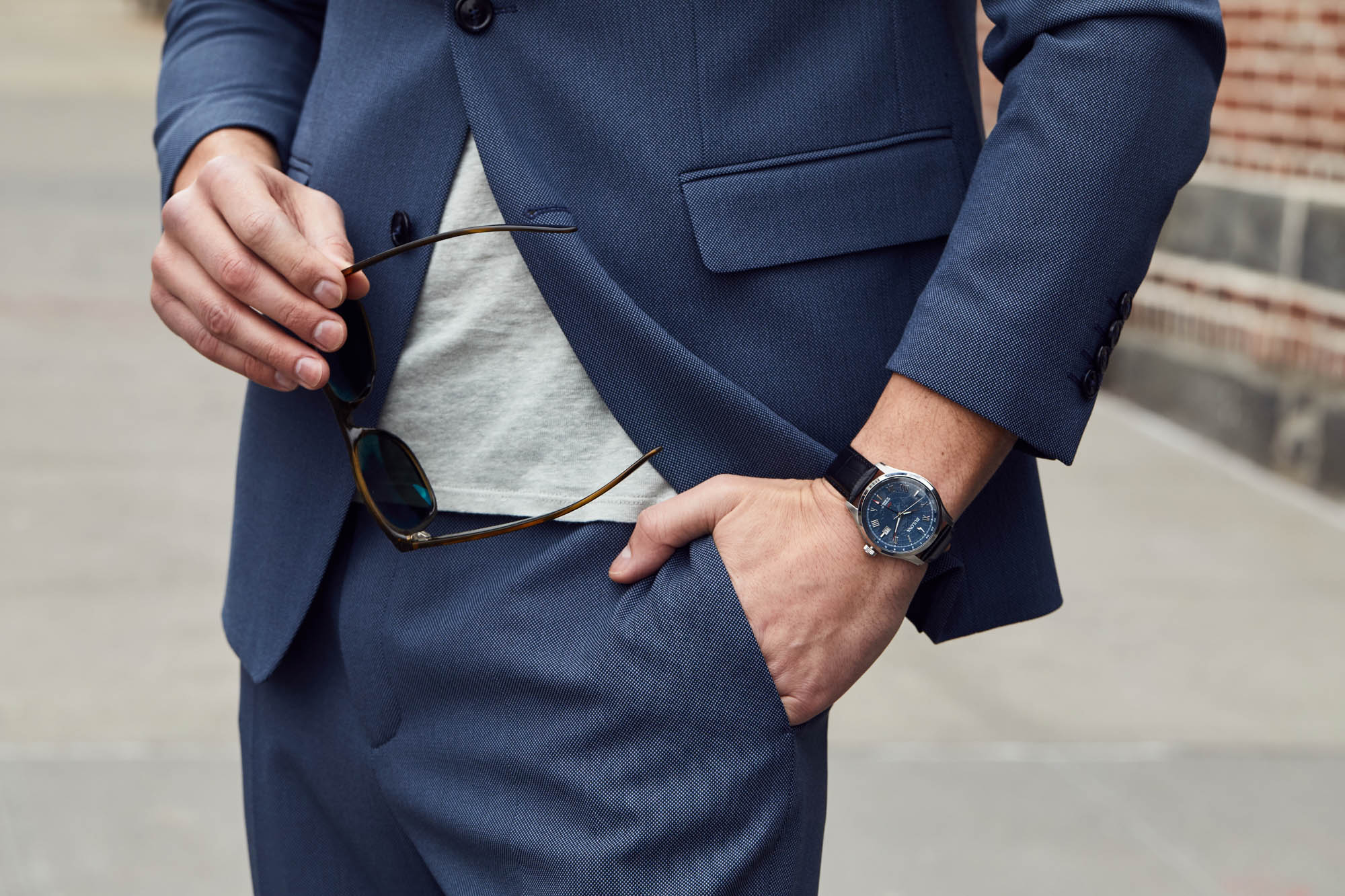 The dial of the Bulova Classic Wilton GMT comes in two different variations to correspond with its two different case options. The stainless steel model features a dark blue dial, while the version with the gold PVD case is fitted with a silvery-white dial. Regardless of color, both versions feature the same core design with an embossed World Map pattern on their surfaces and applied Roman Numeral markers that are finished to match the color of their case. The four centrally-mounted hands are also finished to match the case material, and the alpha-shaped hour and minute hands, along with the tip of the 24-hour hand, receive small slivers of luminescent material for added visibility in low-light conditions. In addition to date windows at 3 o’clock and split-color chapter rings that feature 24-hour scales printed upon them, both dial options for the new Bulova Classic Wilton GMT also feature the “GMT” name in bright red letters for an additional splash of color that matches the tip of the GMT hand. 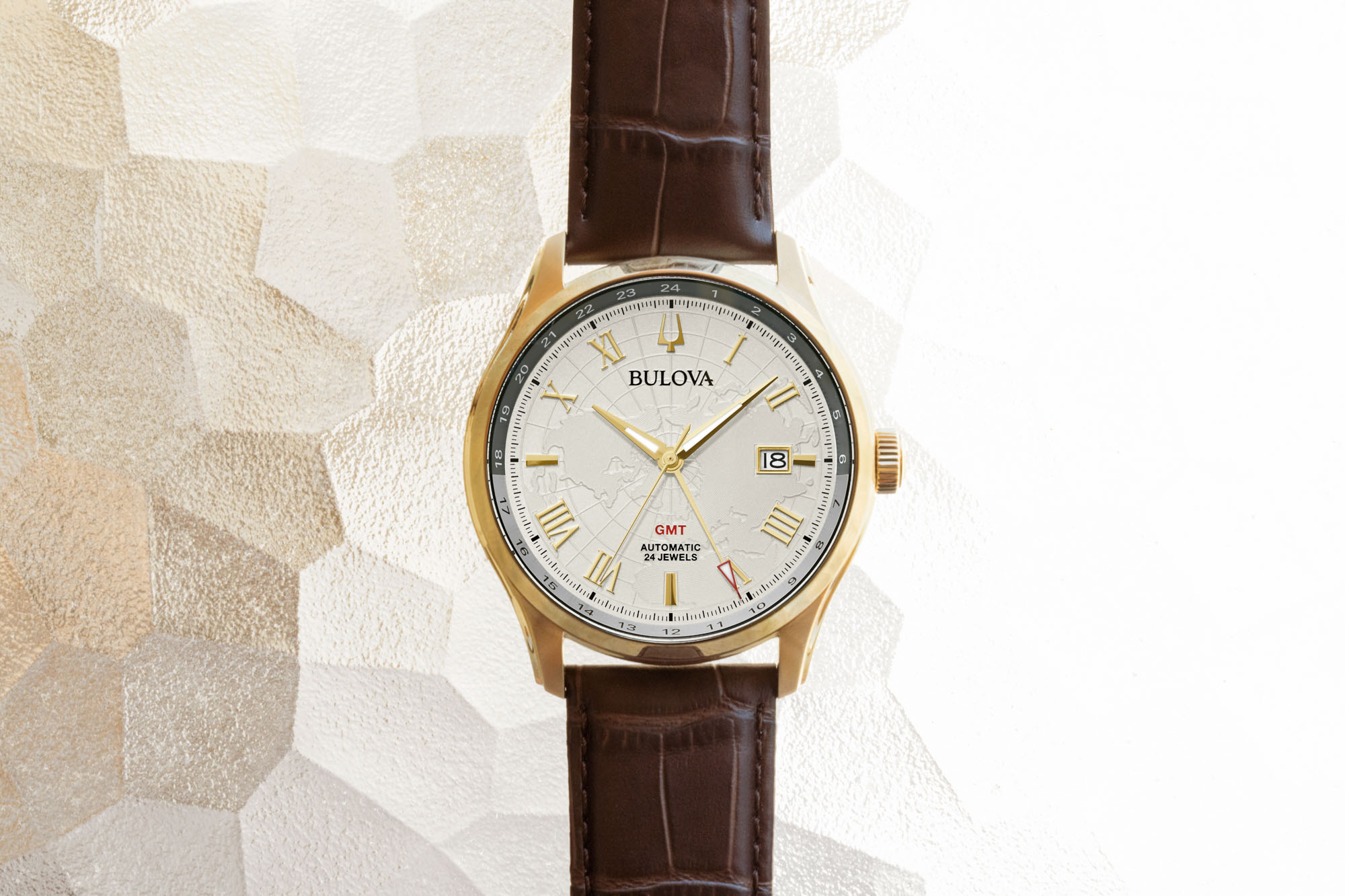 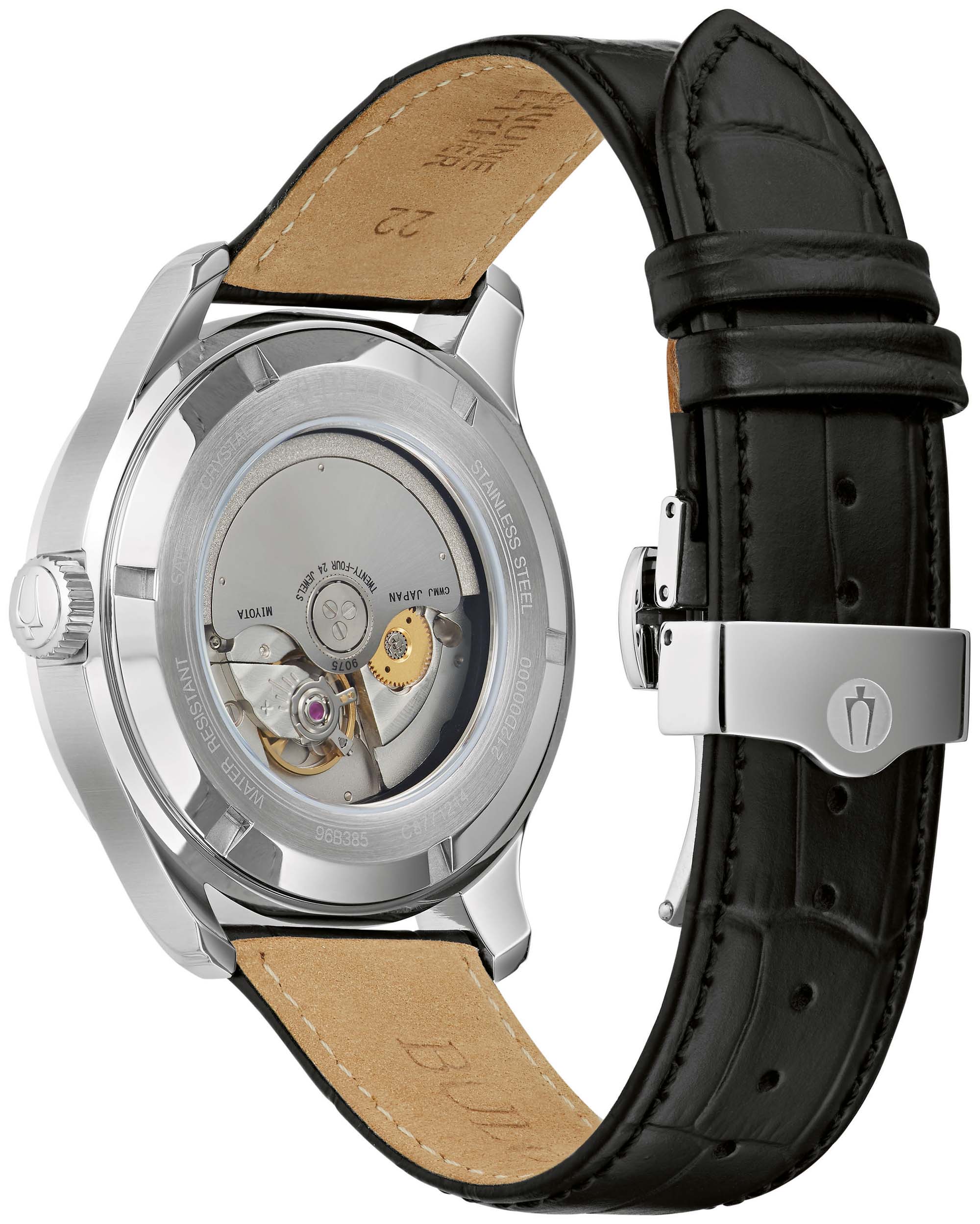 While there will likely be some collectors who immediately disregard the new Bulova Wilton GMT either due to its 43mm case or relatively minimal depth rating, it’s important to remember that this is more of a dress watch than a tool watch, meaning that 30 meters of water resistance is more than enough, and the footprint of the movement itself leaves plenty of room for a reduction in case diameter down the road. What is important to highlight here is that the new Bulova Classic Wilton GMT has an official retail price of $875 USD for the stainless steel model and $895 USD for the gold PVD version. While true GMT watches under a grand were relatively few and far between up until this point, Miyota’s new GMT movement is significantly less expensive than its Swiss-Made counterparts and it is likely only going to become more affordable over time once the novelty of it starts to diminish. Priced at well under a grand, the new Bulova Wilton GMT is now the most affordable true GMT watch on the market, and the only thing more exciting than that is thinking about where this new Miyota GMT movement might pop up next. For more information, please visit the brand’s website.