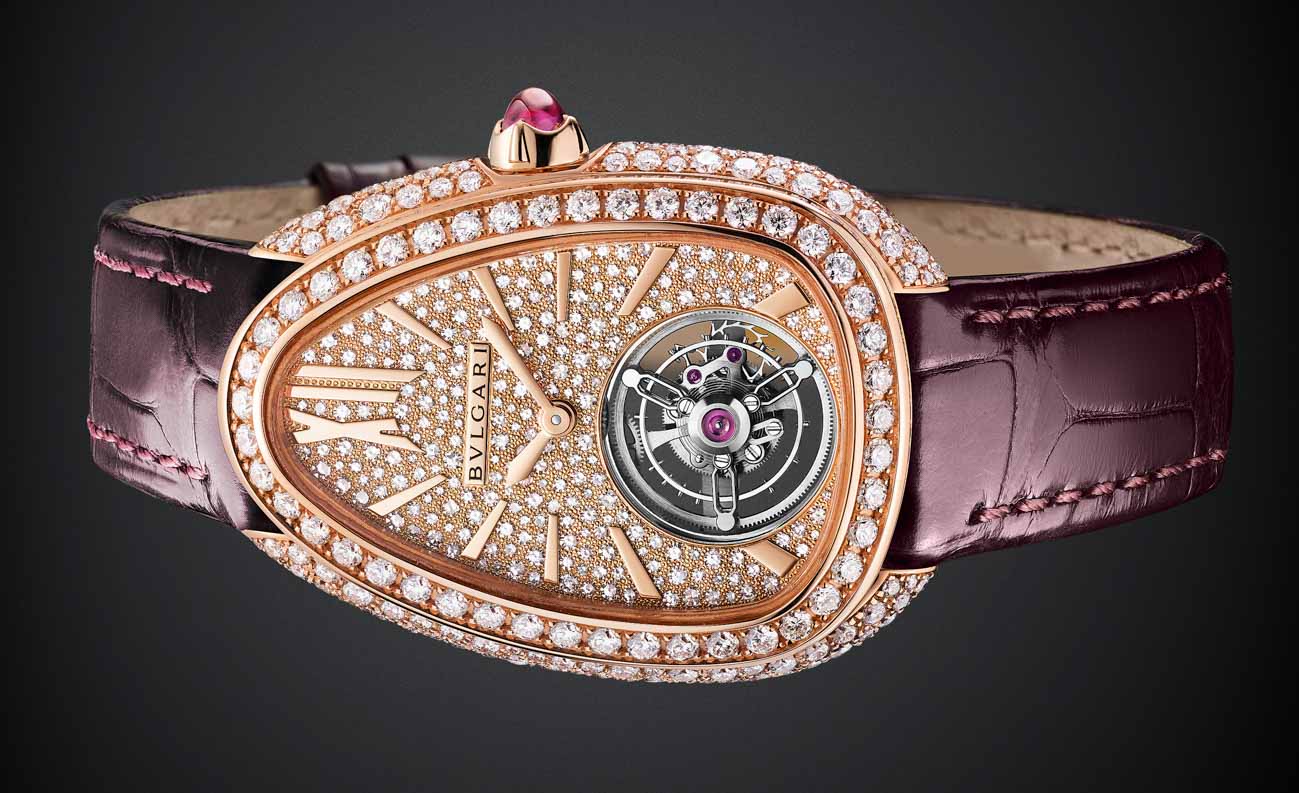 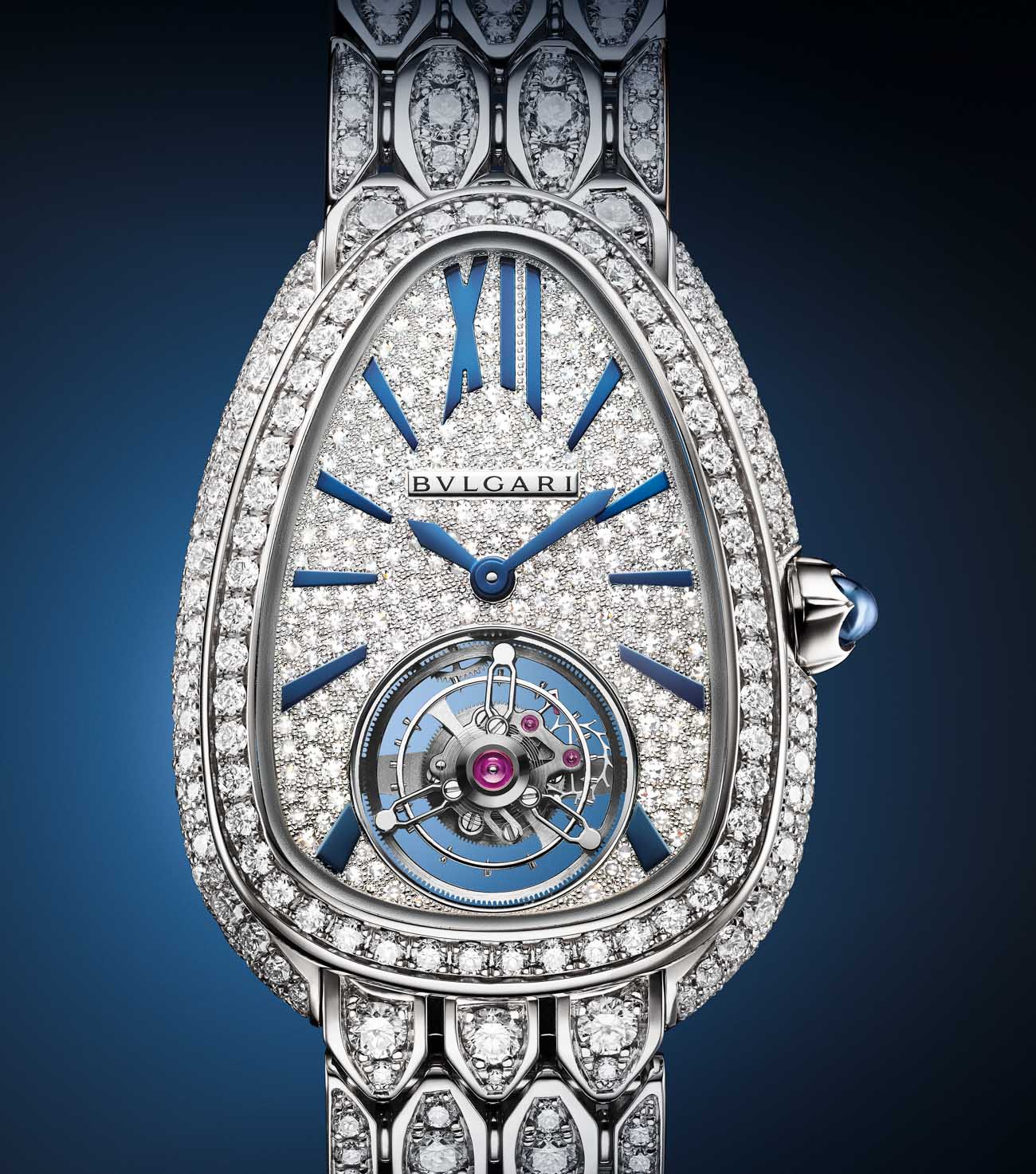 Something new for the watch industry in 2020 is the fact that LVMH group watch brands are debuting their latest timepiece collections at an all-LVMH-themed show in Dubai. aBlogtoWatch will be there to cover the latest and greatest timepieces from Louis Vuitton, Hublot, TAG Heuer, Zenith, and LVMH’s Bvlgari. With group’s acquisition of Tiffany & Co., next year we might see timepiece novelties from the formerly American-owned luxury house as well.

For 2020, Bvlgari’s main horological innovation is a new tourbillon movement for women, included in the Serpenti Seduttori Tourbillon collection. For the most part, the rest of Bvlgari’s new wristwatches are line extensions that add new materials or styles to existing products. Bvlgari’s watch department is currently in a transformational phase, as it has both a new leader and must contend with a lot of uncertainties about what the market wants. The result is Bvlgari taking a safe road by sticking to its roots while also aiming at the higher-luxury segment where disposable income levels are more reliable — even if Bvlgari has to put in the effort to swoon consumers who already know and perhaps have opinions about their brand. 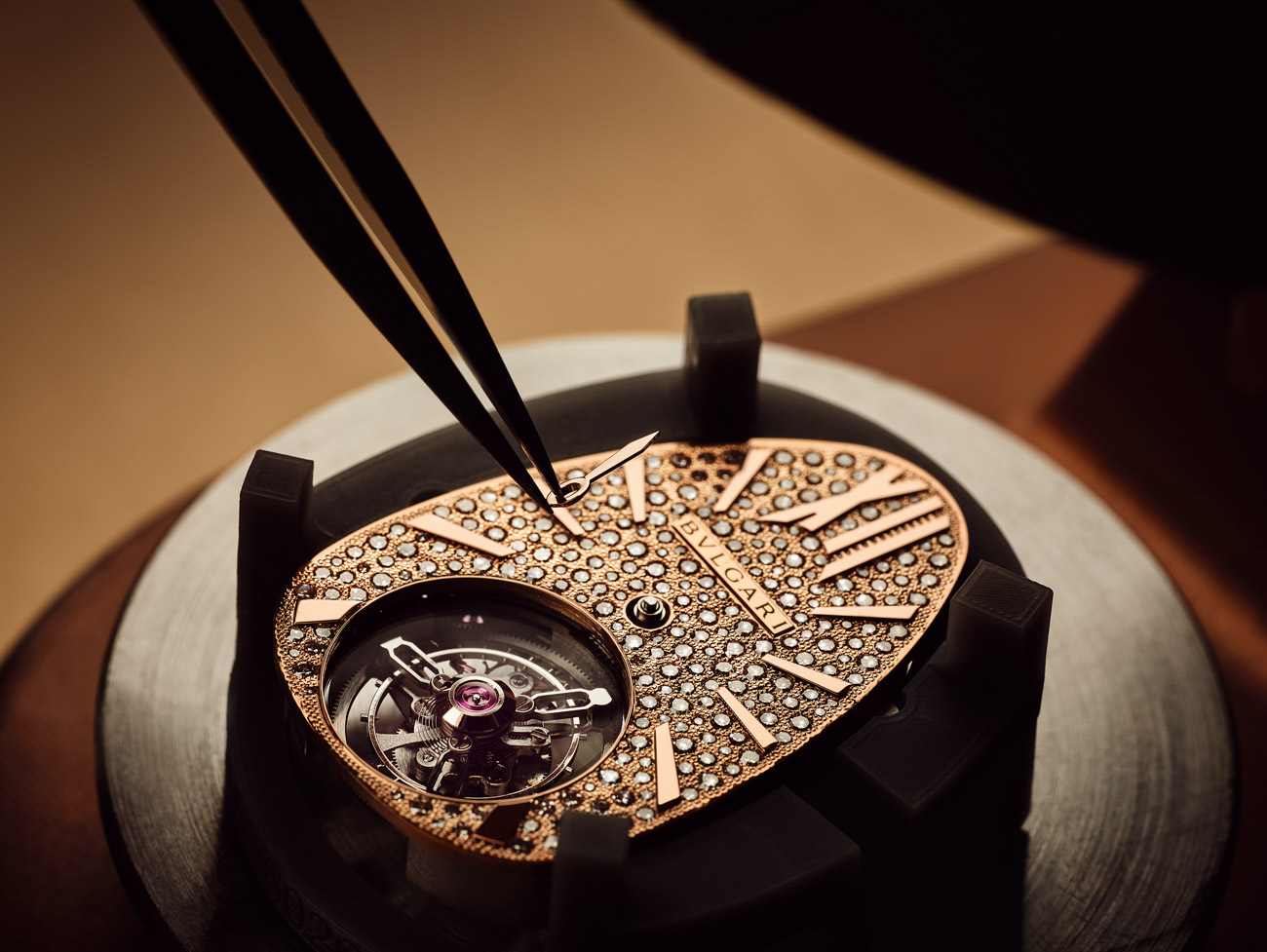 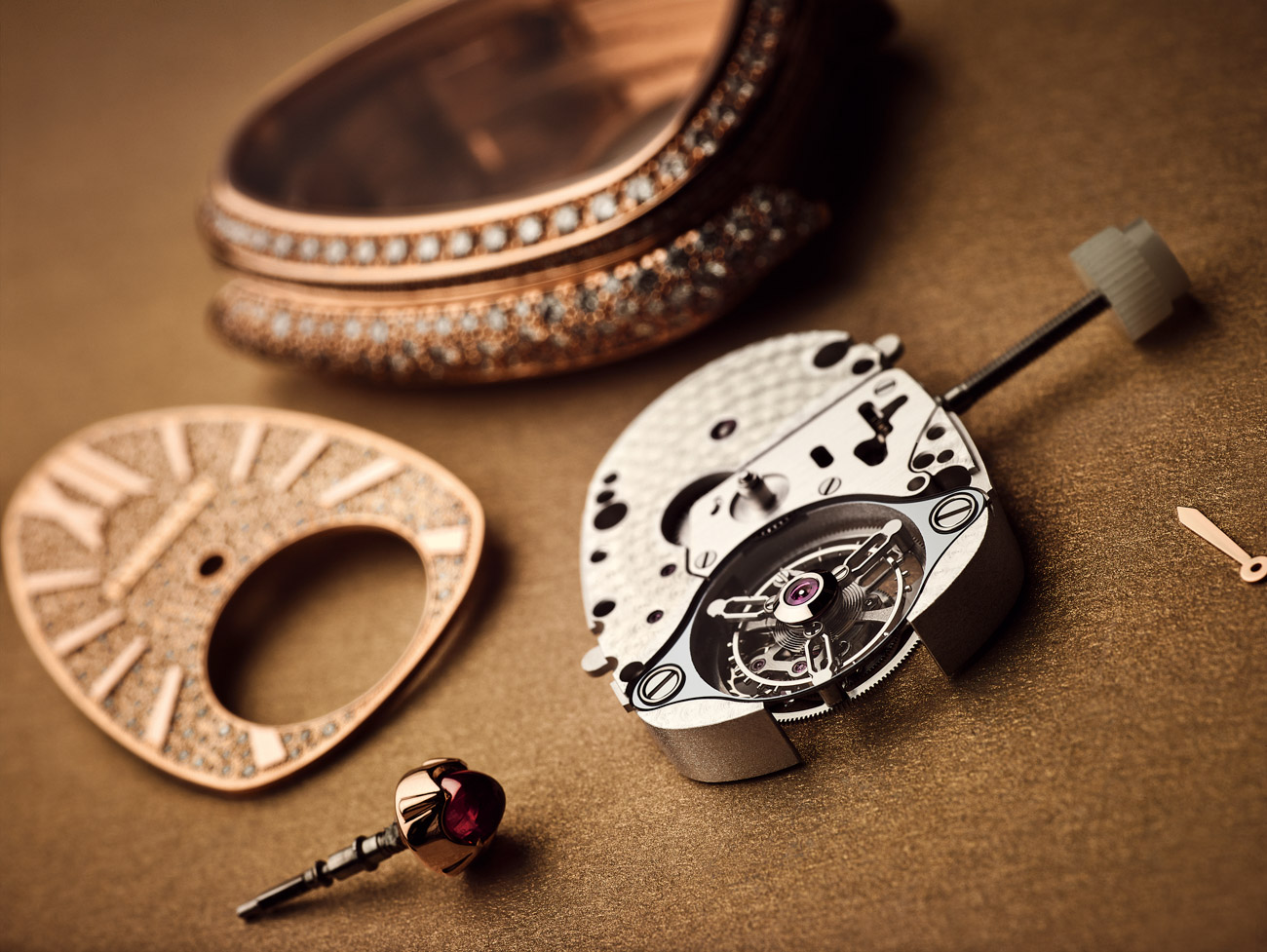 Luxury watches for women with tourbillon mechanisms in the mechanical movements are uncommon but certainly not unheard of. Women and men are known to commonly judge luxury watches very differently from one another — and it is also common for retailers to ask luxury brands to release more complicated timepieces for women. For example, most female luxury watch buyers statistically prefer quartz movements because they are smaller, more accurate, and present far fewer headaches. That isn’t to say that women never care about complicated movements or tourbillons. In addition to particular women with technical or engineering training (who tend to appreciate more complex mechanical timepieces), one of the most common ways a woman might get into complicated timepieces is via a husband, boyfriend, or father who himself is interested in mechanical watches and introduces them to her. Thus, it is probably not incorrect to assume that a watch like the Bvlgari Serpenti Seduttori Tourbillon watch is for the girlfriend, wife, or daughter who has it all… as the tourbillon (despite its inherent beauty) is really just a status symbol.

For those interested in a status statement for their wrist, the Bvlgari Serpenti Seduttor Tourbillon White Gold And Full Diamonds reference 103262 is going to be the most appealing new Bvlgari watch of early 2020. The piece combines the new in-house made tourbillon movement with an 18k white gold case and bracelet, which are both entirely set in diamonds. The Serpenti Seduttori Tourbillon is also available in 18k rose gold or on a strap. That said, all the current versions of the Serpenti Seduttori Tourbillon have diamonds to decorate them. This is Bvlgari’s attempt to very forcibly remind people it is a jeweler before it is a watchmaker (at least as far as they want women to be concerned). Let’s not forget Bvlgari as a chocolate and cosmetics maker, as well as a hotelier. 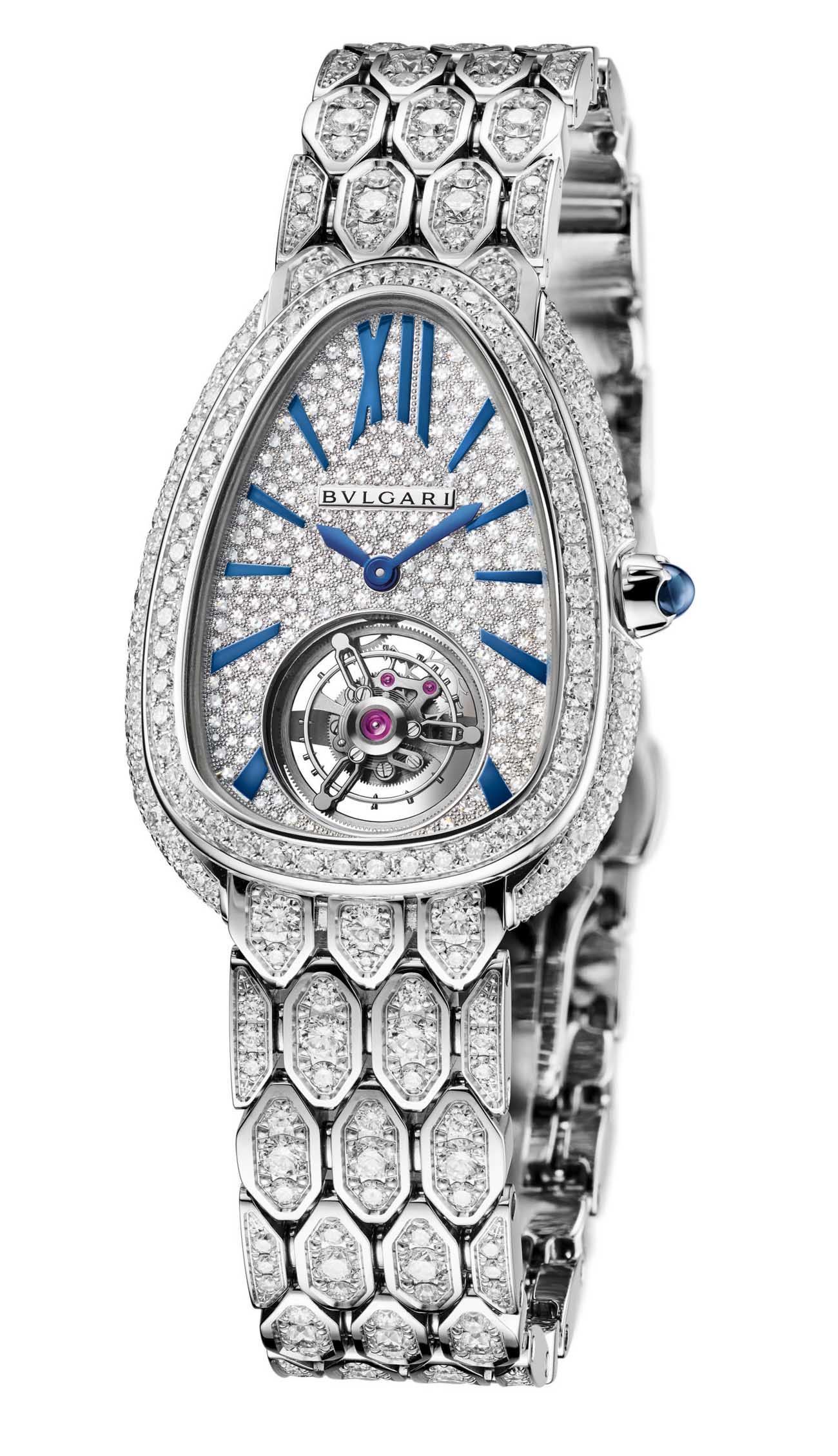 In Italian, “seduttori” means seduction — and it is a characteristically “Bvlgarian” way of naming one of its women’s products. The question on Bvlgari’s mind as the Serpenti Seduttori Tourbillon watches are released is likely how many women they can seduce with this new ritzy product collection. The base watch is the iconic Bvlgari Serpenti, which is themed after snakes. Unlike many other Serpenti watches with their multiple-wrapping “twisted metal” spring-style bracelets, these debut Serpenti Seduttori watches come on comparatively simple leather straps or single-wrap Serpenti bracelets (which makes more sense if you want to set diamonds in it). I think the most interesting Serpenti Seduttori Tourbillon watch that Bvlgari might release will be one on the Serpenti’s iconic “tubogas” flexible snake-like bracelet, which I mentioned above.

The “snake head” Serpenti case for the Seduttori Tourbillon is sized at 34mm-wide and 8.9mm-thick. For comparison sake, the quartz movement-powered Serpenti Seduttori watch is 33mm-wide and 6.85mm-thick. Thus, the increase in size for a tourbillon-based mechanical movement is quite minor. 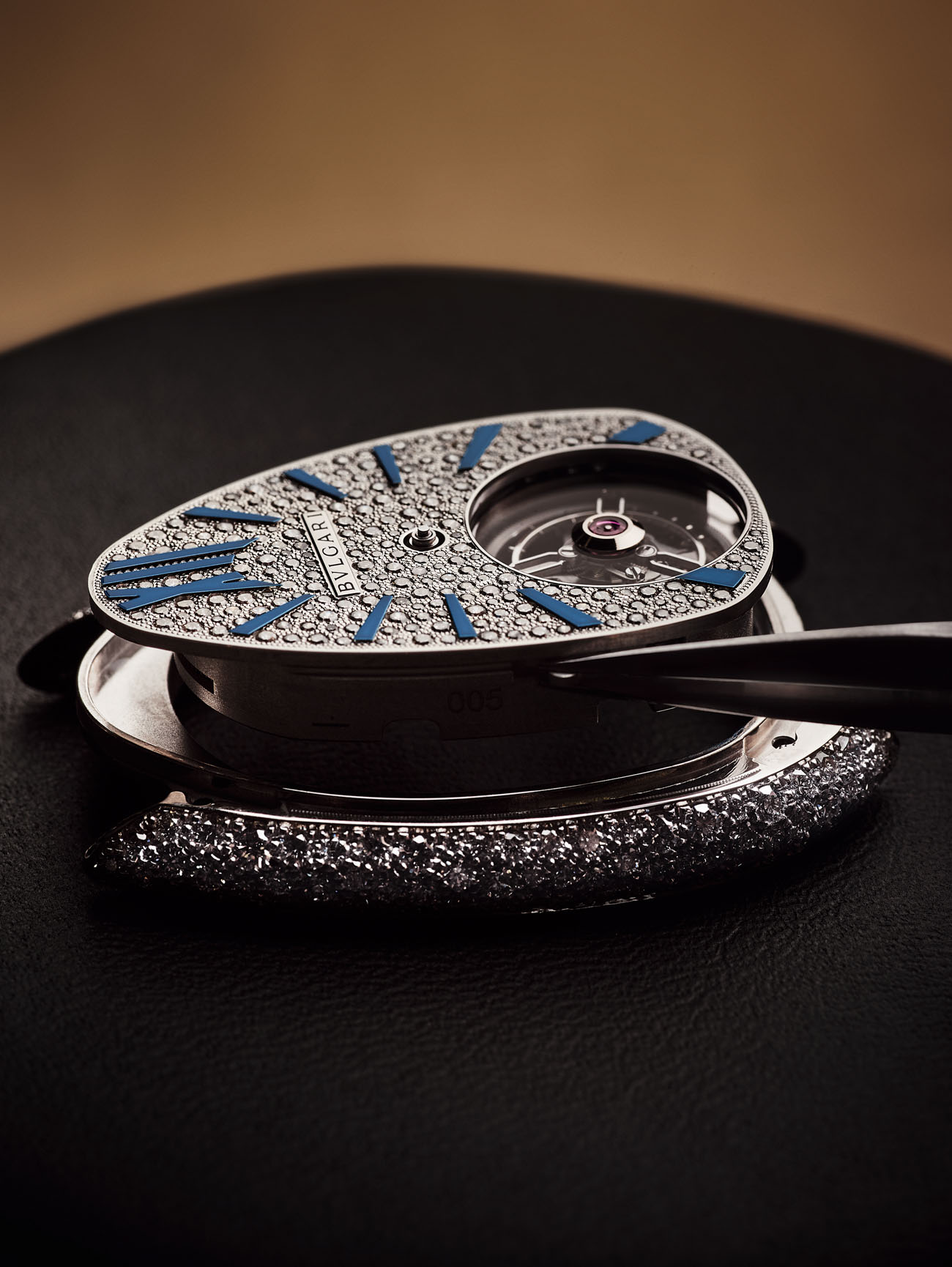 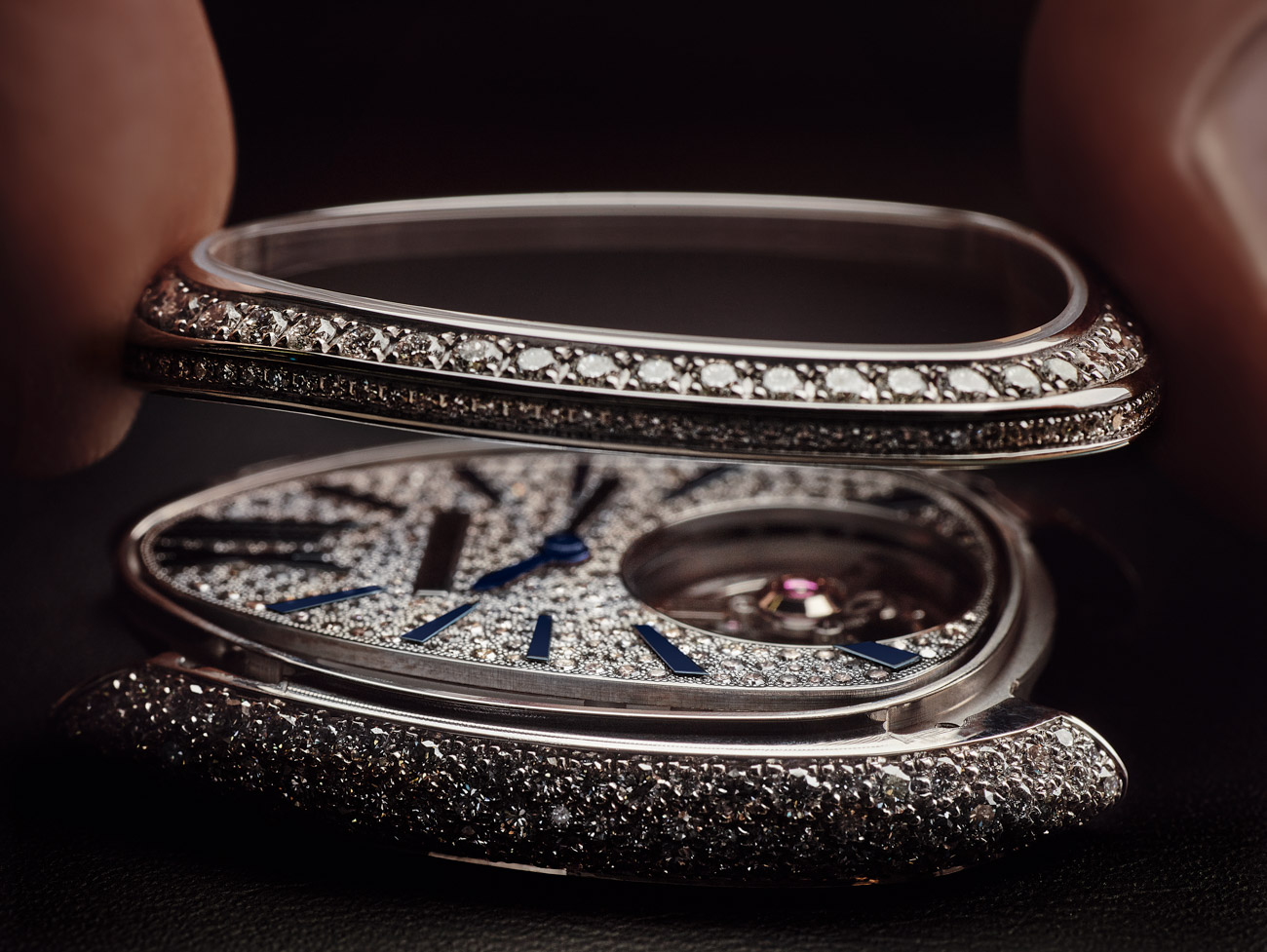 In addition to the 18k white gold on bracelet fully set with diamonds (reference 103262) Serpenti Seduttori Tourbillon, Bvlgari is also today releasing the reference 103260 in 18k white gold (with the same volume of diamonds on the case and dial) on a blue alligator strap (reptile material it is, but serpent skin it is not), as well as the 18k rose gold reference 103257. The white gold Serpenti Seduttori Tourbillon watches are particularly legible thanks to their use of blue-colored hands and hour markers.

The tourbillon-based movement inside the Serpenti Seduttori Tourbillon is said to be the “smallest tourbillon movement on the market.” That seems to imply that Bvlgari might not be setting any records, but that women who want the most petite or feminine tourbillon around need not look very hard. I’m not sure that Bvlgari needs to fight very hard to earn attention when it comes to having a desirable women’s tourbillon, simply because the market really doesn’t have that many of them — especially from brands that for women are mostly known for their jewelry. I can’t even think of any Cartier tourbillon watches for women that might compete with Bvlgari. For now, the Italian-Swiss watchmaker has a stranglehold on a relatively niche market for high-luxury, feminine jewelry tourbillon watches. 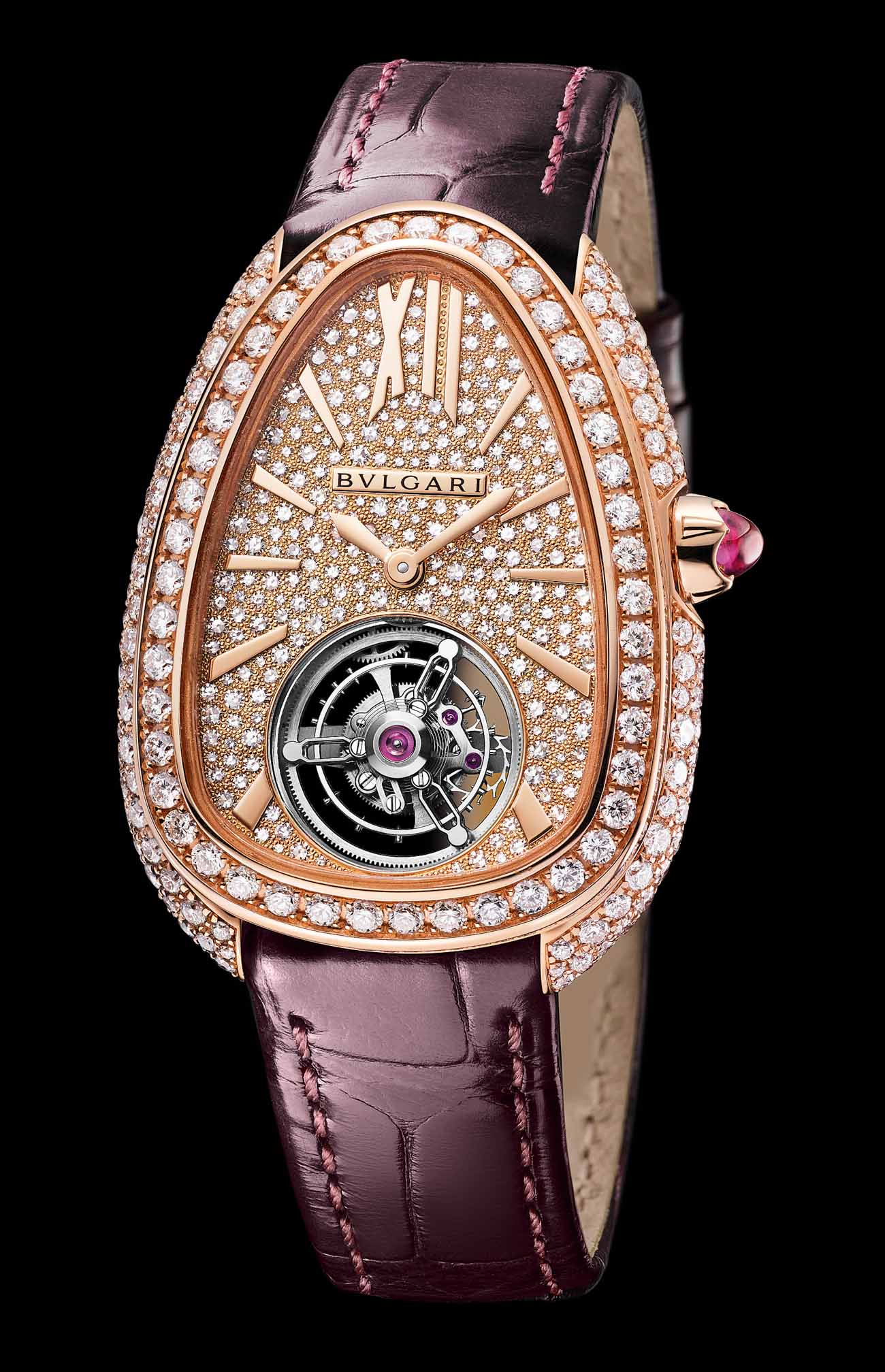 The movement inside the Serpenti Seduttori Tourbillon watches is the new in-house made Bvlgari caliber BVL150. In addition to the relatively small size, the most distinctive feature of the BVL150 is that it is shaped like the distinctive Serpenti case itself. The manually wound movement operates at 3Hz (21,600 bph) with 40 hours of power reserve and features the hours and minutes with the spinning tourbillon cage doubling as the seconds indicator. The tourbillon itself uses a sapphire crystal top-bridge and otherwise looks similar to the tourbillon in other Bvlgari watches such as the Octo Finissimo Tourbillon (though it is slightly different in shape). The movement is 22mm-long, 18mm-wide, and just 3.65mm-thick. 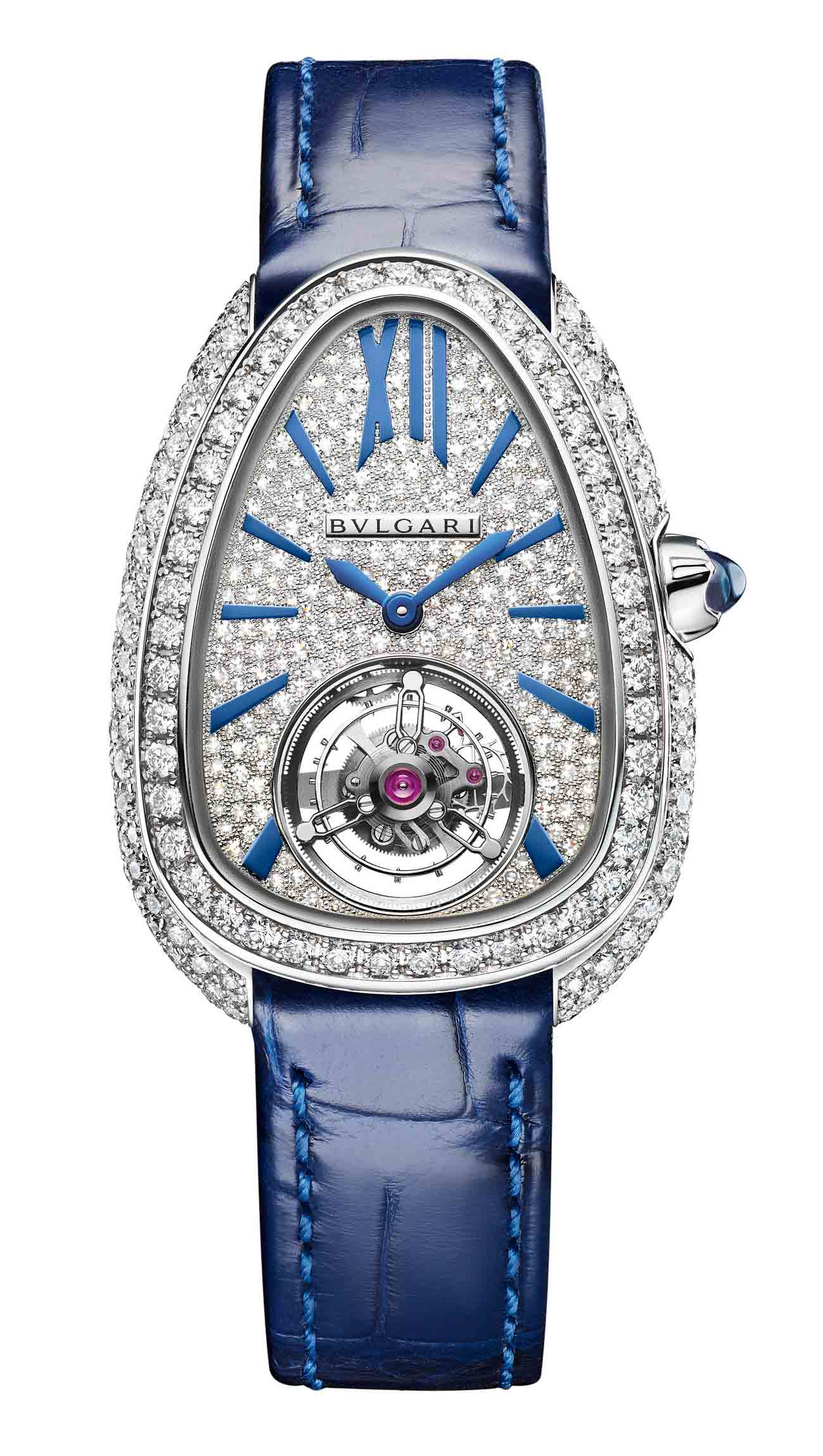 As a high-luxury women’s jewelry watch with a prominent tourbillon, the Bvlgari Serpenti Seduttori Tourbillon does its job well. Traditionally, watches such as this have been a challenge to sell in the mainstream luxury market outside of special situations in which a woman particularly wants a tourbillon or a man (more commonly) wants to get his significant other a tourbillon watch to pair with his tourbillon-based timepiece. A year from now, I’ll be curious to see how the Bvlgari Serpenti Seduttori Tourbillon watch has been received by the watch-lover market. We will update this article with the price soon. Learn more at the Bulgari website here.