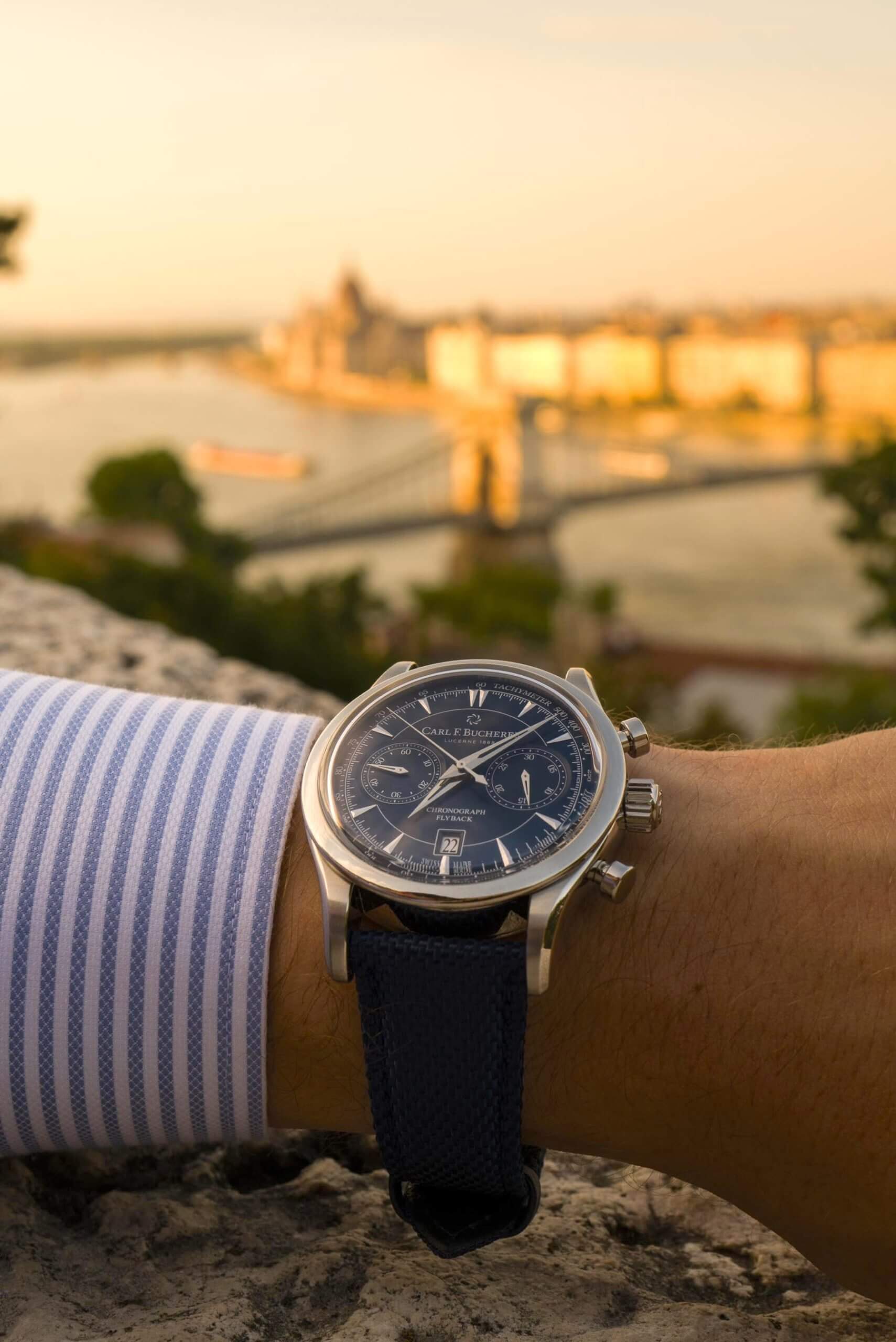 The Carl F. Bucherer Manero Flyback is a timepiece for the cosmopolite, a watch designed to support a big-city life. These models not only celebrate the cosmopolitan spirit that has been an integral part of the Lucerne manufacture’s DNA since 1888, but also put a piece of “Made of Lucerne” watchmaking excellence on every well-traveled wrist, true to the words, “Wherever time takes you, Lucerne travels with you.” 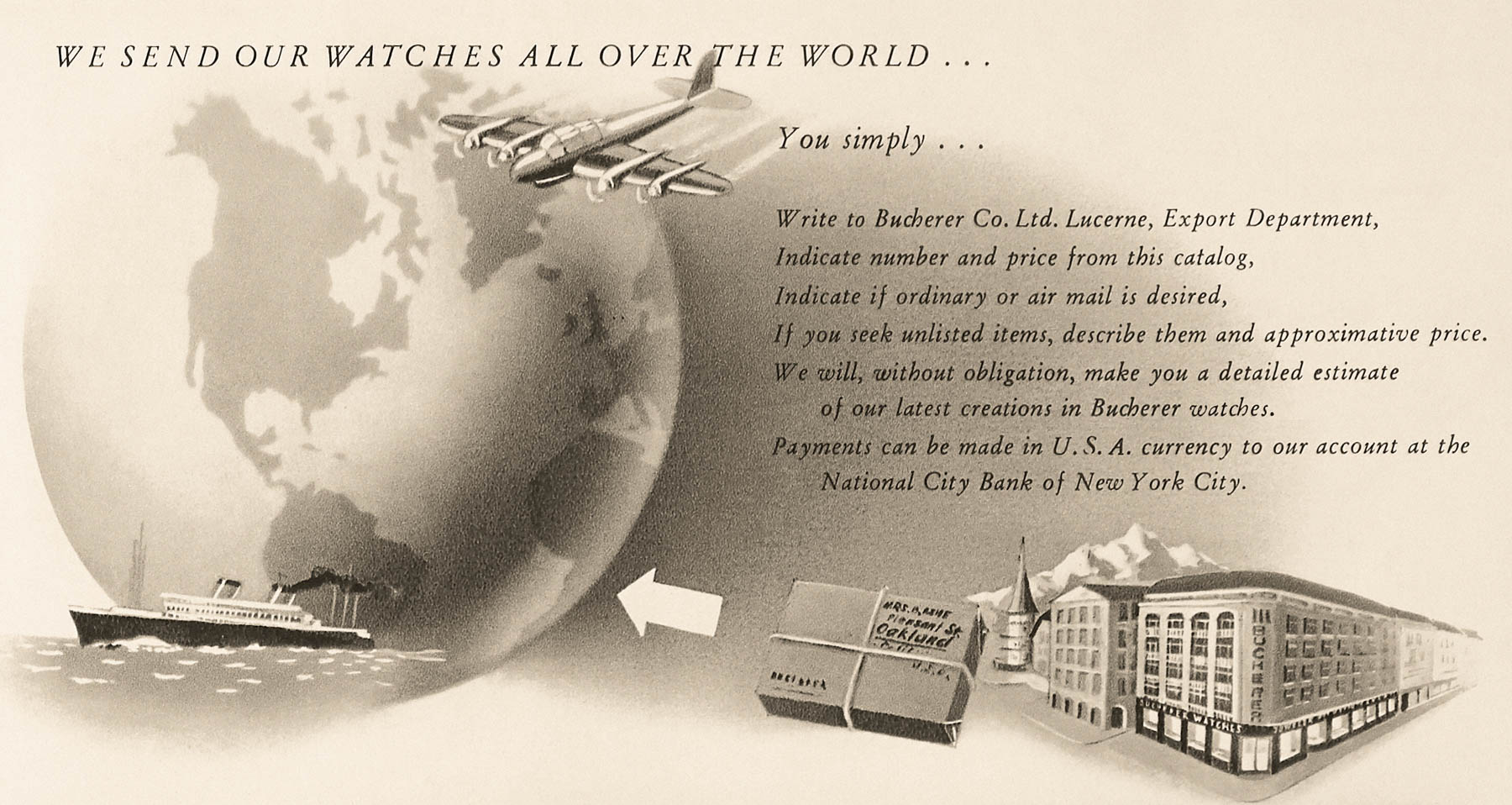 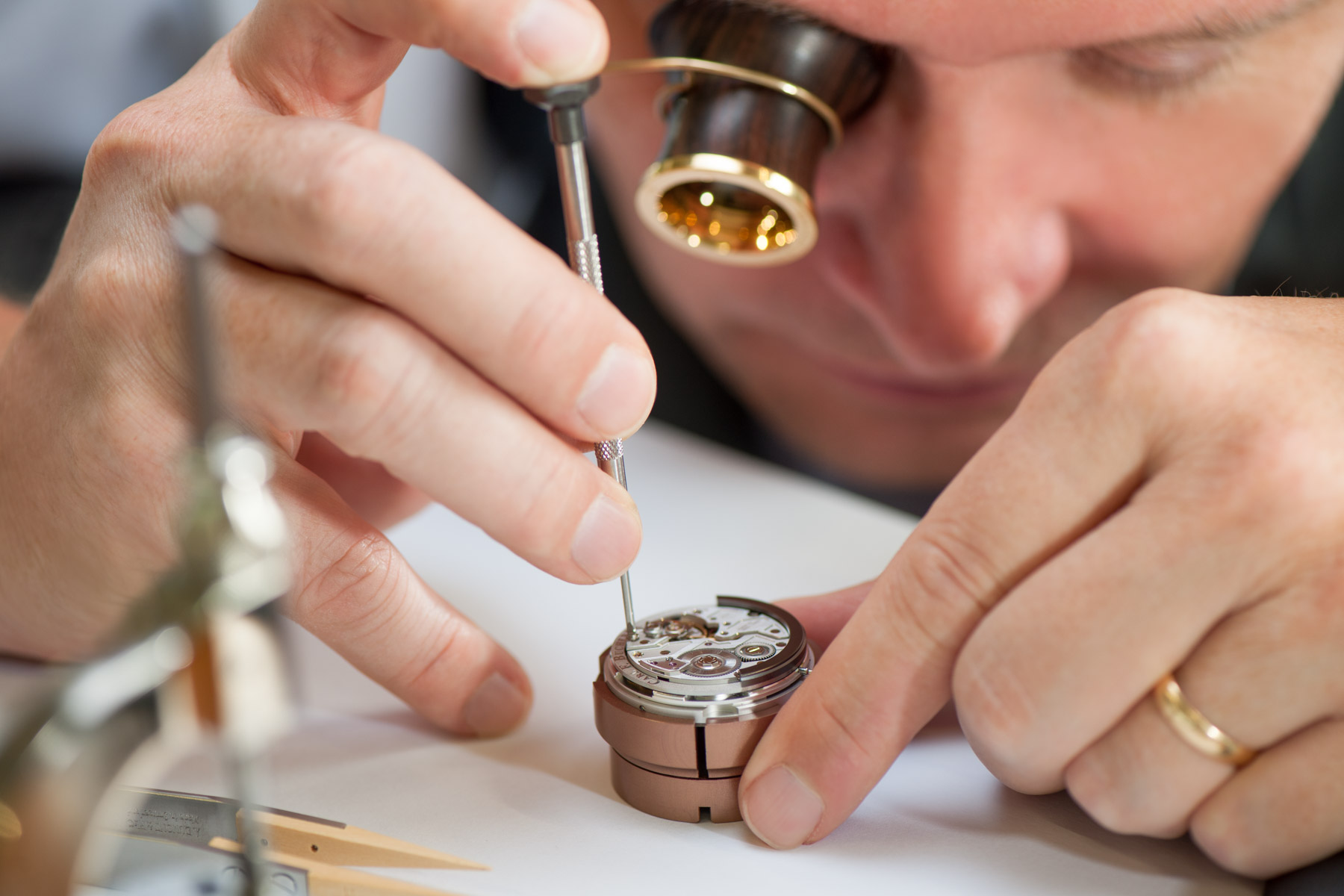 Carl F. Bucherer is an established Swiss watchmaker — a genuine manufacture with its very own ivory tower at the heart of the country. Despite its microcosm of a factory and a rich, 132-year history of truly Swiss Made watches, the brand ranks among those select few who have never lost focus on what should be an essential value of all Swiss timepieces: They should, first and foremost, be made to be worn. Sure, the manufacture produces ultra-high-end, six-figure-priced pieces such as the Double Peripheral, but even these, in their size, construction, and dependability, were designed to live on the wrist — as opposed to vegetating in a drawer. 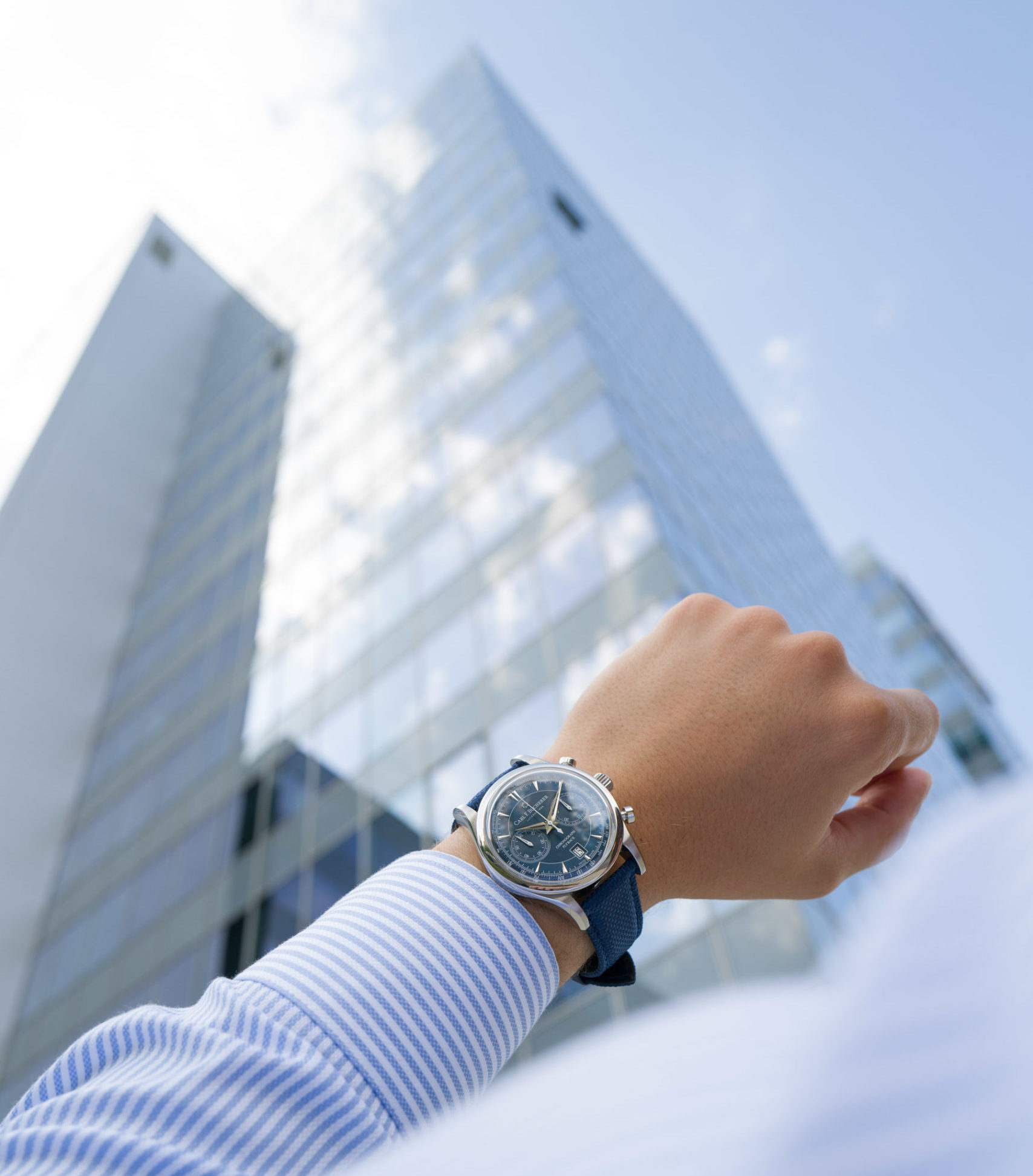 Getting back to the new Manero Flyback — what makes it a “cosmopolitan timekeeper?” Today, having a cosmopolitan mindset has become about more than just being well-traveled — it’s also about being open-minded and exuding the confidence and style to succeed wherever you are. The Manero Flyback was designed with precisely this attitude in mind. Both of the new models from this fresh watch family feature the color blue — the color of the horizon — as the base of a traditional dial layout that nevertheless manages to look unique. Whether on the flexible nine-link metal bracelet or the blue textile strap woven from radiant blue thread, the Manero Flyback has all the distinctive presence it needs to stand out from the crowd. 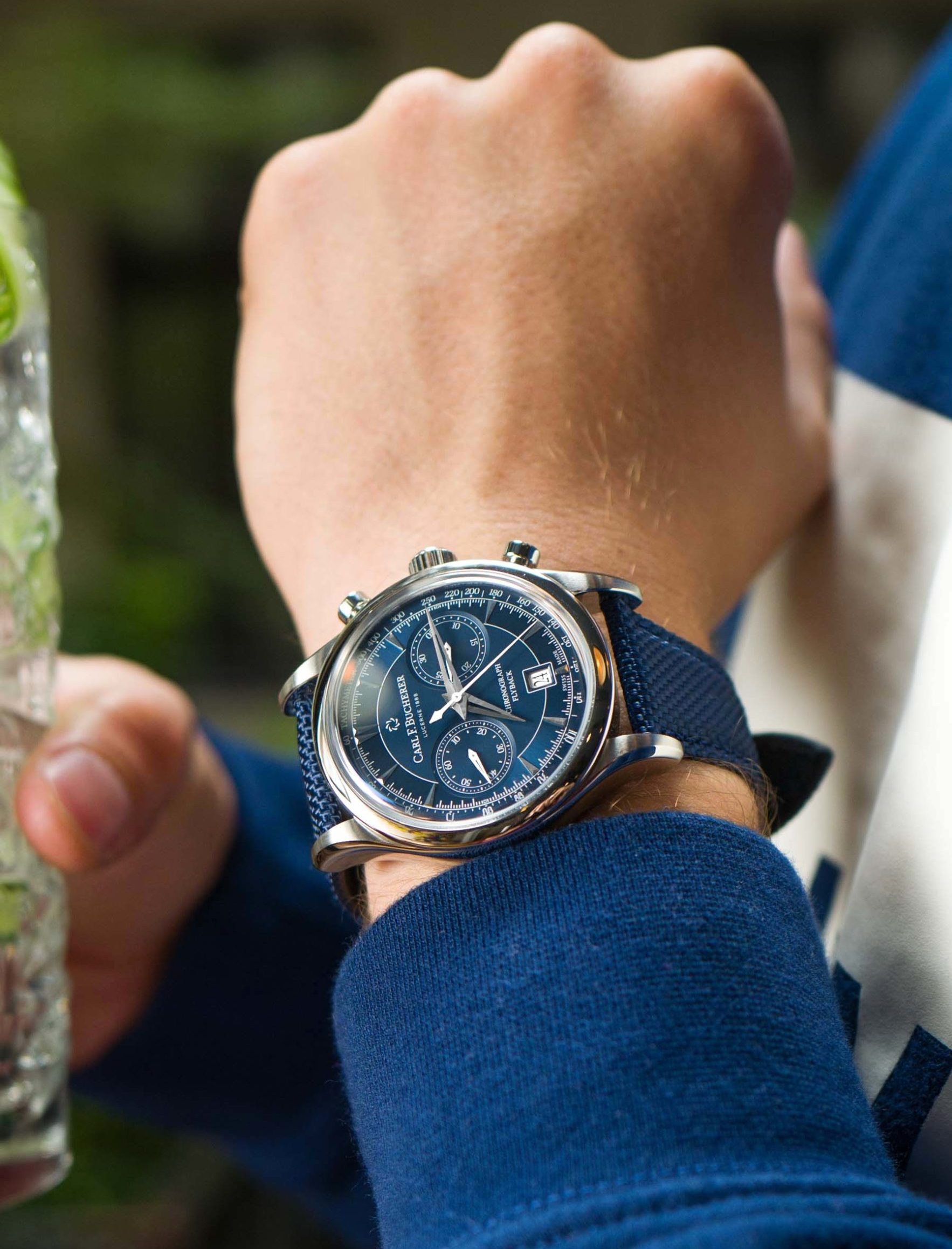 The Manero Flyback was introduced as recently as 2016, but the cosmopolitan spirit has its roots reaching back to the very beginnings of Carl F. Bucherer, having driven the company since its foundation in Lucerne by Carl-Friedrich Bucherer in 1888. “This cosmopolitan spirit is part of our history as much as it is an integral part of our philosophy today. In 1888, Carl-Friedrich Bucherer laid the foundation not only for our brand but also for a cosmopolitan, international corporate culture. His sons, Carl Eduard and Ernst, traveled the world, studied abroad, opened the first branch in Berlin in 1913, and expanded to South America just a few years later… and yet always remained loyal to their home in Lucerne,” explains Sascha Moeri, CEO of Carl F. Bucherer. The Manero Flyback is born of this spirit and the watchmaking excellence that has its roots in the heart of Switzerland but is at home anywhere in the world. 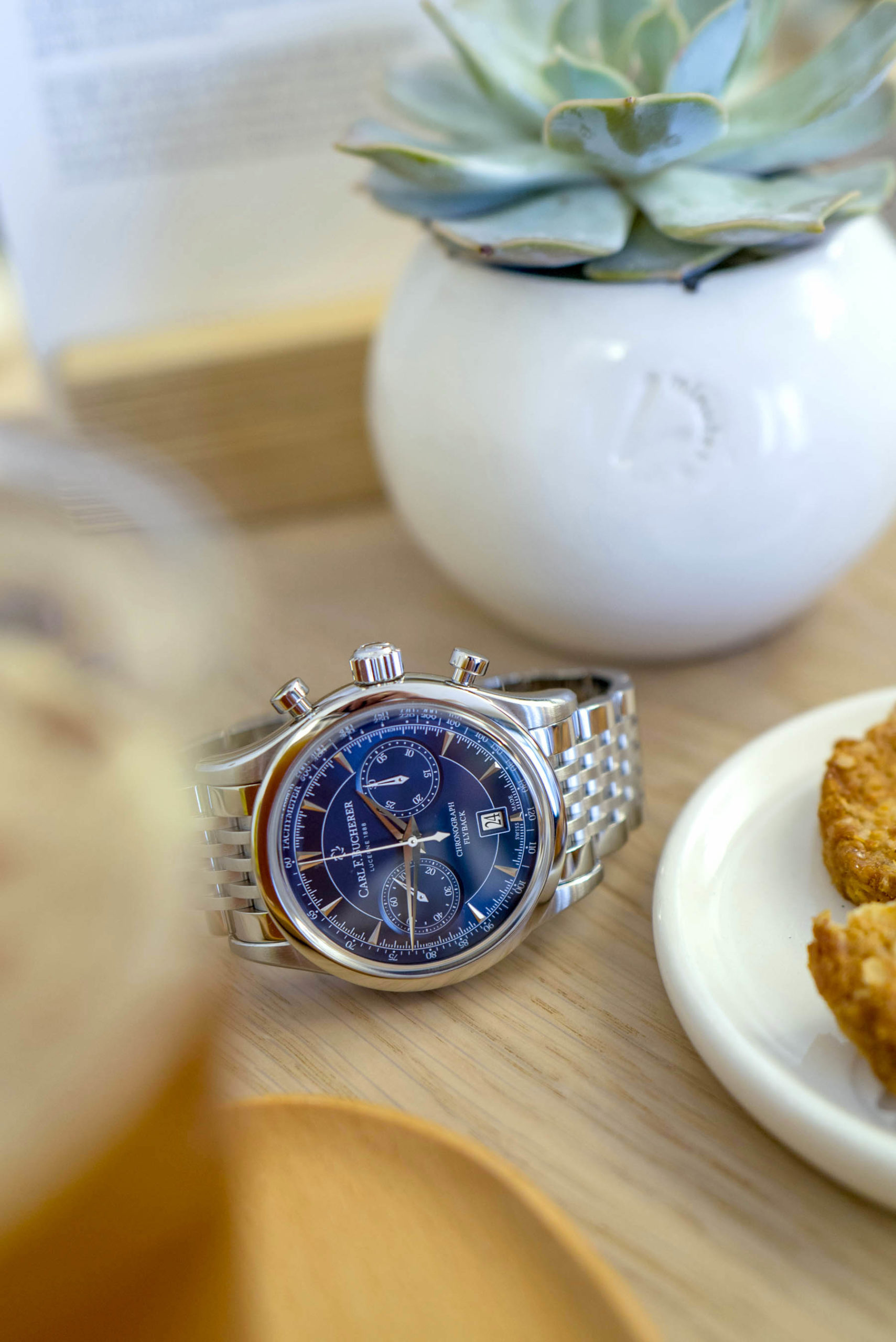 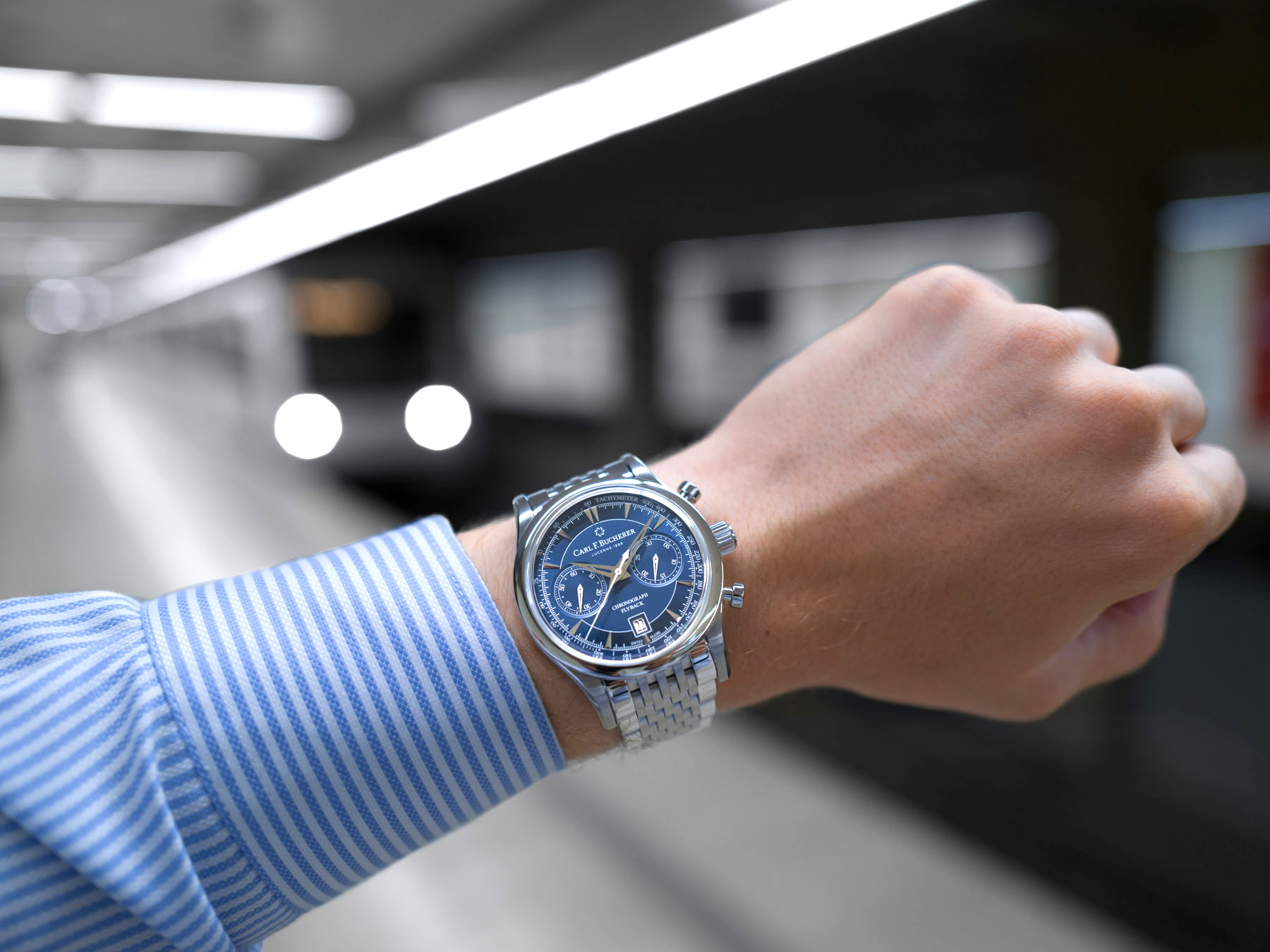 Although it is made to last a lifetime with proper care, it takes only a few hours with it on the wrist to witness the powerful character that Carl F. Bucherer bestowed upon the Manero Flyback with. While it is composed of traditional watchmaking elements — the long, sweeping lugs, polished, rounded bezel, piston-style pushers, and a sector dial — the Manero Flyback is very much its own thing in a way that takes a hands-on look to fully appreciate. At 43mm-wide, it is large without being brash, mainly owing to a slim bezel design and clever use of alternating polishing throughout the rest of the case and bracelet. 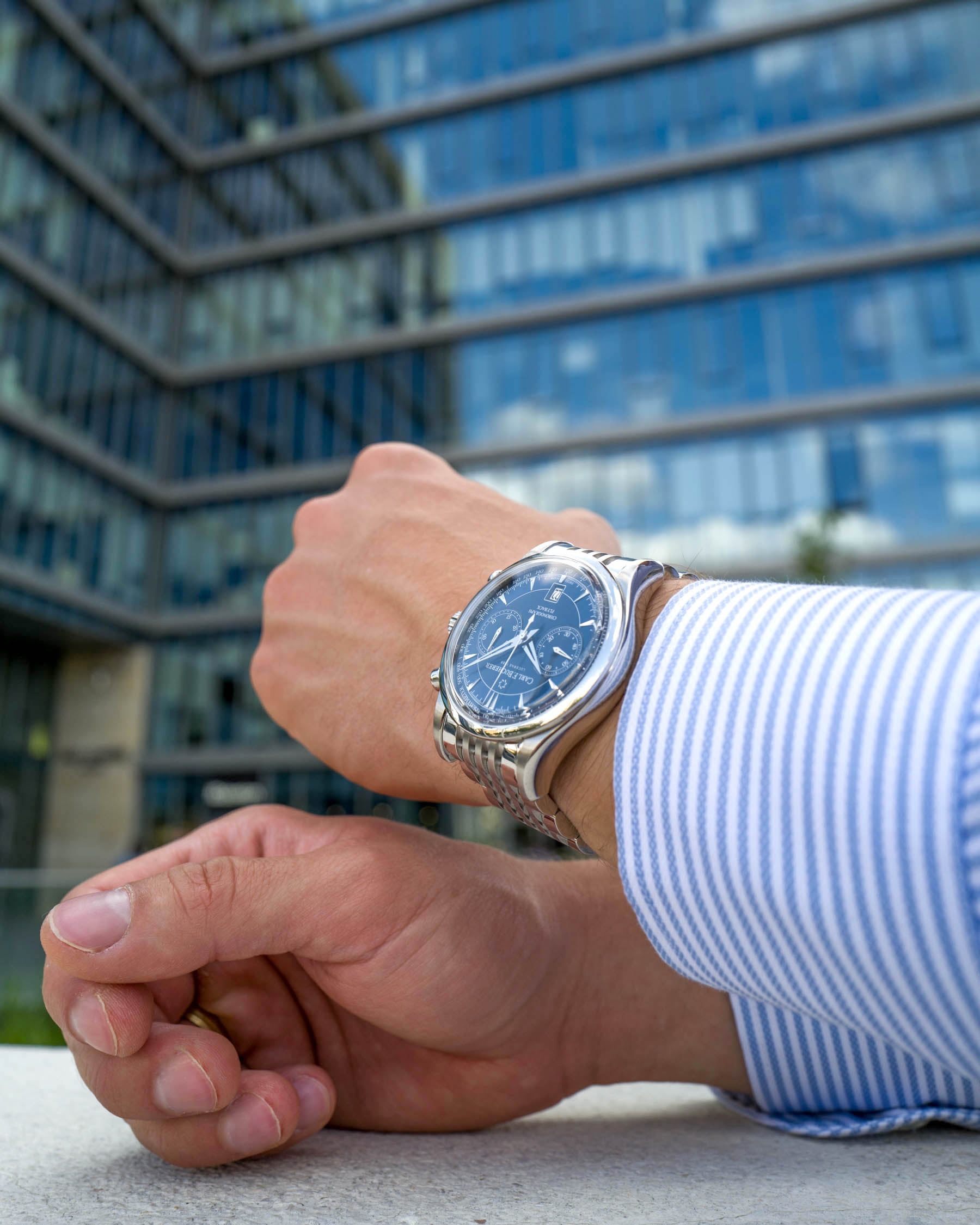 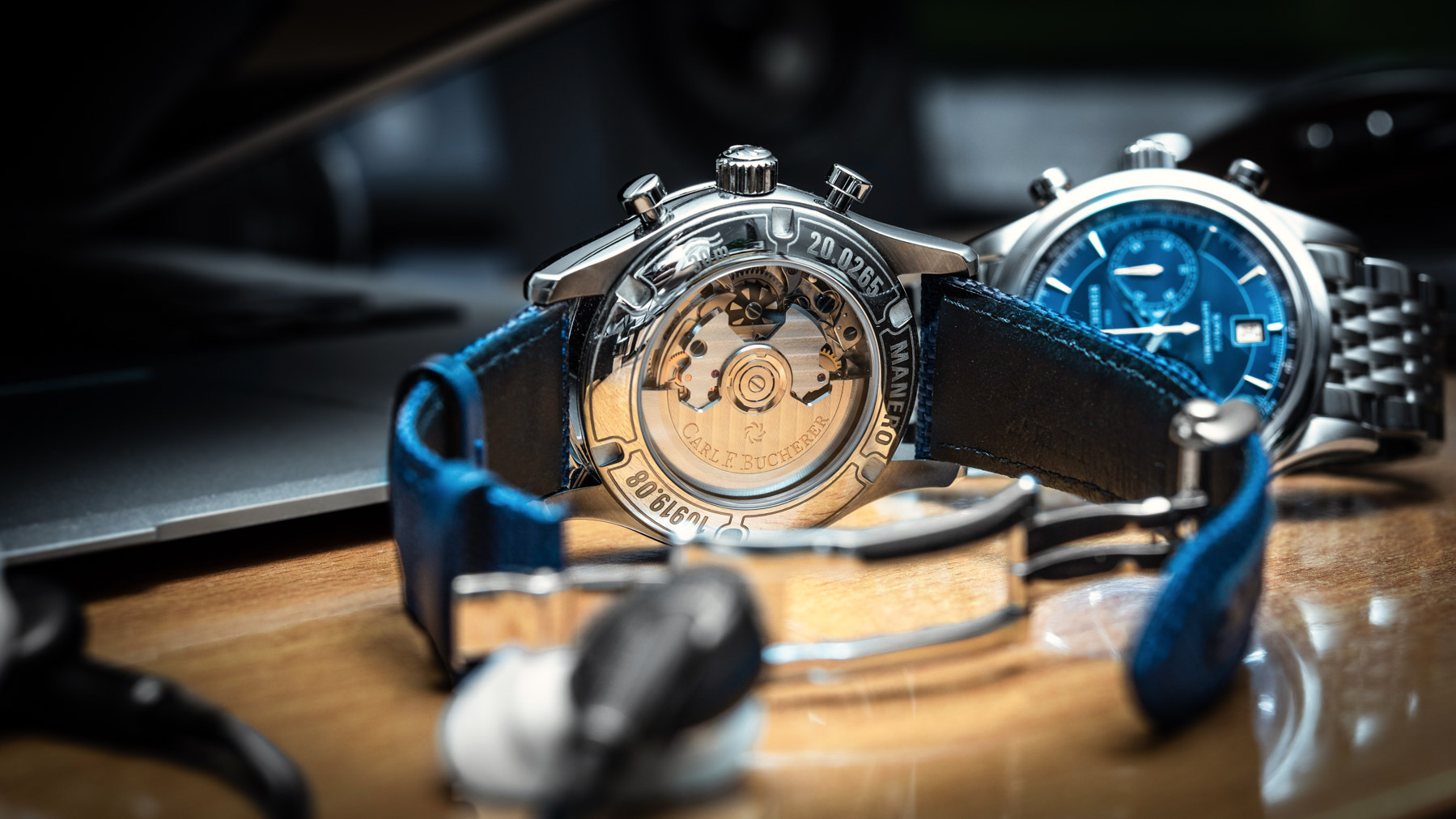 When on the move, the new Manero Flyback proves comfortable with a nine-link bracelet — one of the more complex constructions among metal bracelets — that relies on closely stacked rows of smaller links, introducing a greater number of flexing points that ultimately allow for a more accurate adaptation to the curves and ridges of the wrist. Beautifully integrated between the long-swept lugs, with its polished outer and brushed inner links, it blends neatly with the polished case and brushed dial elements of the Manero Flyback. Matched to a double-folding clasp, the blue woven strap is like any astutely chosen accessory: It goes with just about anything but the most formal of attire. Powered by an elaborately decorated, heavily modified, now column-wheel operated 7750-based chronograph caliber with the addition of a flyback complication, the Manero Flyback relies on an architecture famed for its reliability and long-term operability. 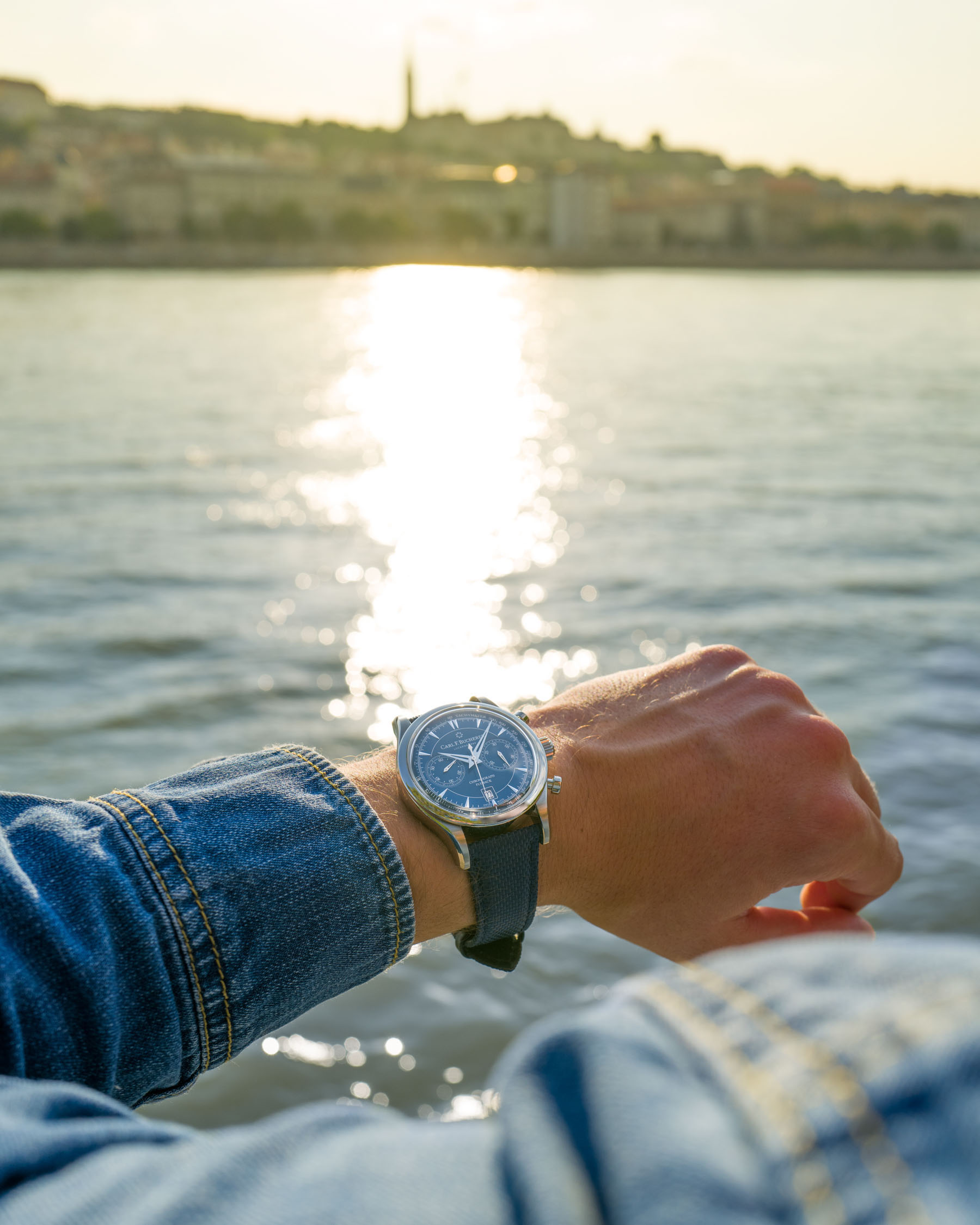 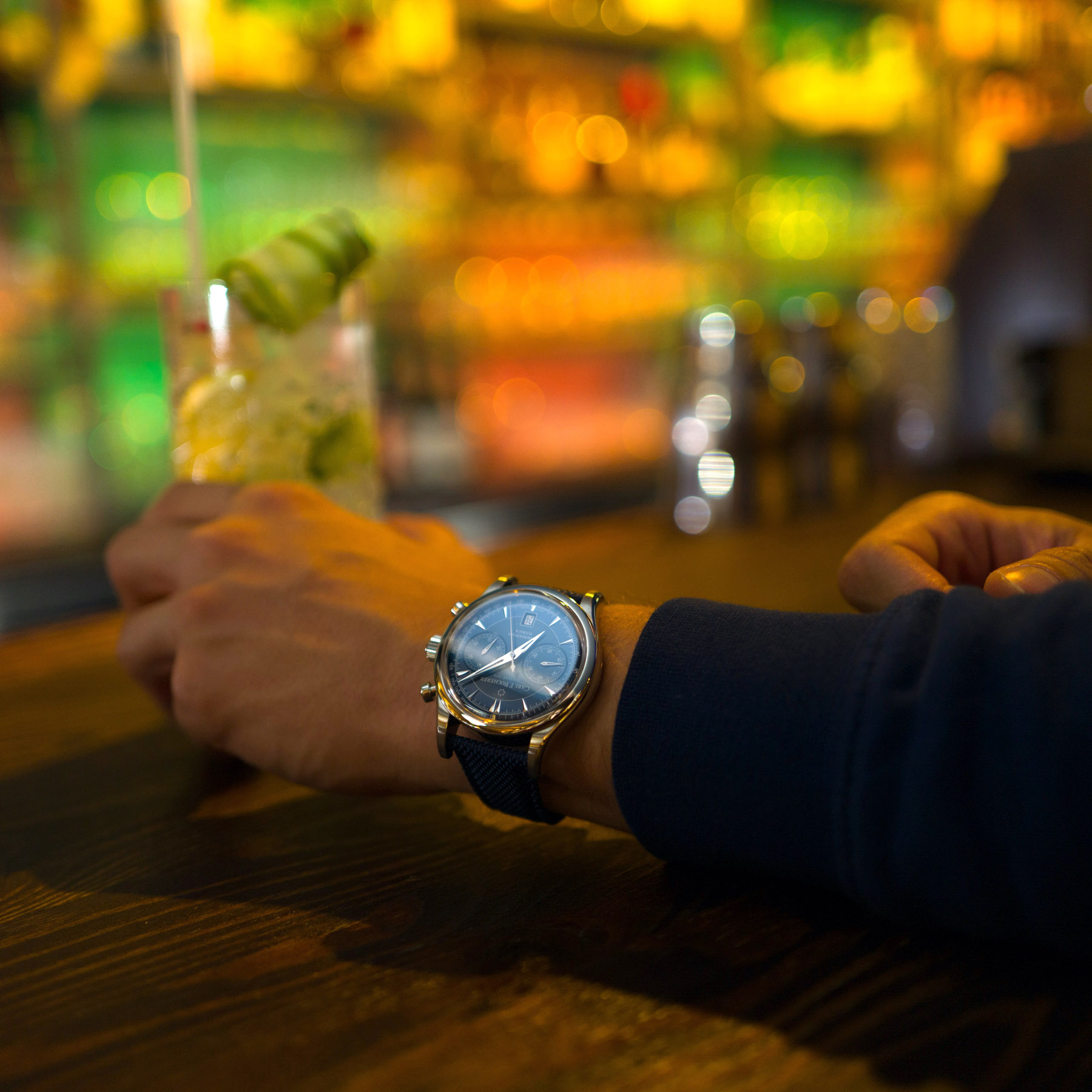 Whether you are closing your day at a more relaxed spot in your hometown or you get to go out — if that is currently a possibility in your metropolis — the Manero Flyback will be there for the ride with its powerful character to match your very own. The Carl F. Bucherer Flyback in blue is priced at €5,500 on the woven strap and €5,900 on the nine-link bracelet, both prices including VAT. You can learn more about the Manero Flyback collection at the Carl F. Bucherer official website here.