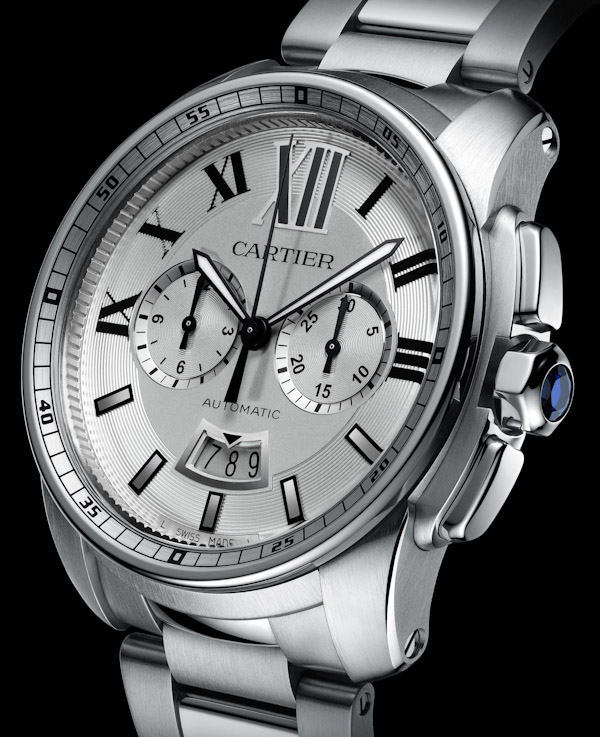 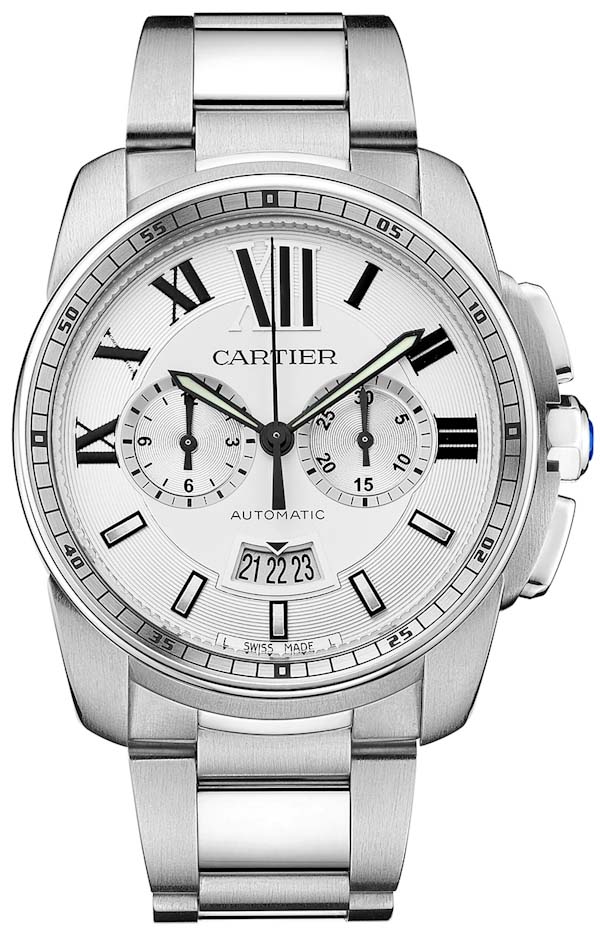 In 2010 Cartier released a brand new collection of men’s watches called the Calibre. It was rather revolutionary for the brand for a couple of reasons, bringing Cartier’s men’s collection into the 21st Century. It was also a mass produced watch that contained an in-house made Cartier movement – something that previously only existed in their most high-end pieces.

I knew the Calibre would be a hit from the start when I first discussed it here. It was handsome, the right size, and very much what a modern guy wanted in a Cartier. Sure models like the Santos and Roadster would always be popular, but I think Cartier needed something with a little sport in it as well as pizzazz. Since 2010 Cartier has trickled out variations on the original design by adding a bracelet option in 2011, and for 2012 there is a chronograph. For a full hands-on review on the original Cartier watch (on the bracelet) see this article. 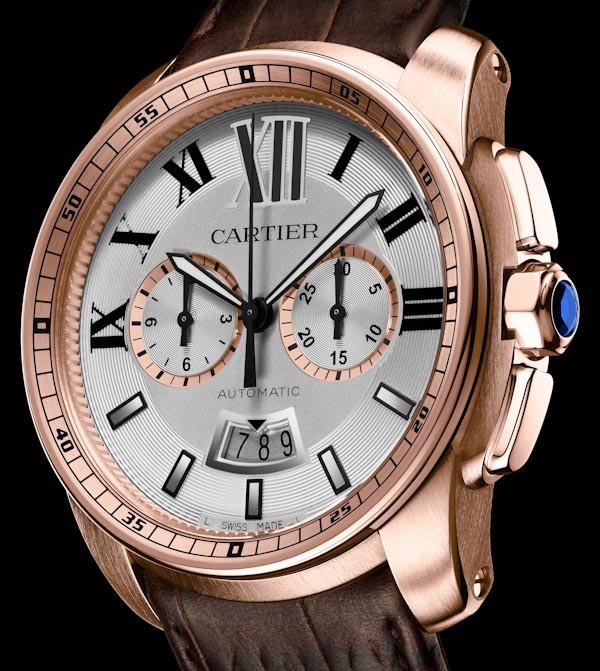 It wasn’t difficult to predict that Cartier would build upon the Calibre watch with new models and features over the years. In fact, the Calibre case is used in many of their much higher-end pieces as well. Though those models are distinct from the basic Calibre models because they target vastly different price demographics. This Cartier Calibre Chronograph is the second version of the “mainstream luxury” Calibre watch collection. The case design is unchanged from the original save for the addition of the chronograph pushers.

Cartier inserted chronograph pushers into the extended crown structure, which look extremely elegant. In fact, if you look at the three-hand version of the Calibre you’ll notice that area which now contains the chronograph pushers appears as though it was designed from the beginning with a plan that pushers would eventually be there. That is probably the case actually. For 2012 the Calibre Chronograph will be available in a 42mm wide steel or 18k pink gold case – and a bracelet or strap option is available from the outset. 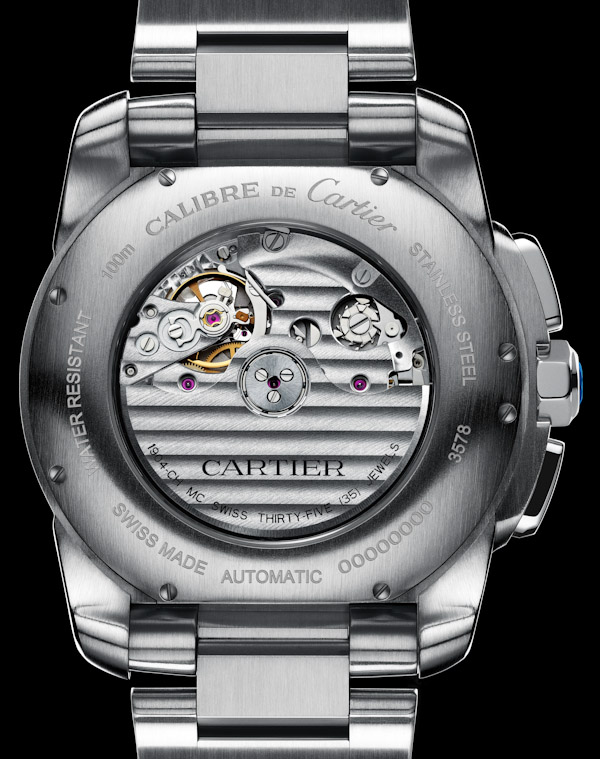 The chronograph will be a bi-compax chronograph that measures a full 12 hours. That means the watch will have no running seconds hand, unless you have the chronograph function going all the time. The dial has been redesigned to incorporate the subdials, and is finally totally symmetrical. Cartier also moved the minute scale ring out to the flange ring – an area that was previously bare with just a brushed metal finish. This changes the look of the watch and also has the effect of making the dial appear larger. The dial is now able to have larger, more distinct hour markers, which once again take the form of half Roman numerals and half baton markers (is this Cartier’s version of a California dial?). You have the same type of decor on the dial, but everything feels more grounded given the symmetrical design. Cartier retained the “expanded” date window, but moved it to 6 o’clock. All in all I like the dial a lot, but one again feel that Cartier designed the main hands to be a bit too short.

Inside the watch is a new movement which builds upon the in-house made Cartier 1904 MC. The new movement is conveniently named the 1904-CH MC. It is an automatic with a column wheel-based chronograph and 48 hours of power reserve. Once again the movement is very visually appealing in terms of design and decor. I love that little Cartier “C” shaped part of the balance wheels fine adjuster. You can see the movement through the sapphire exhibition caseback window. 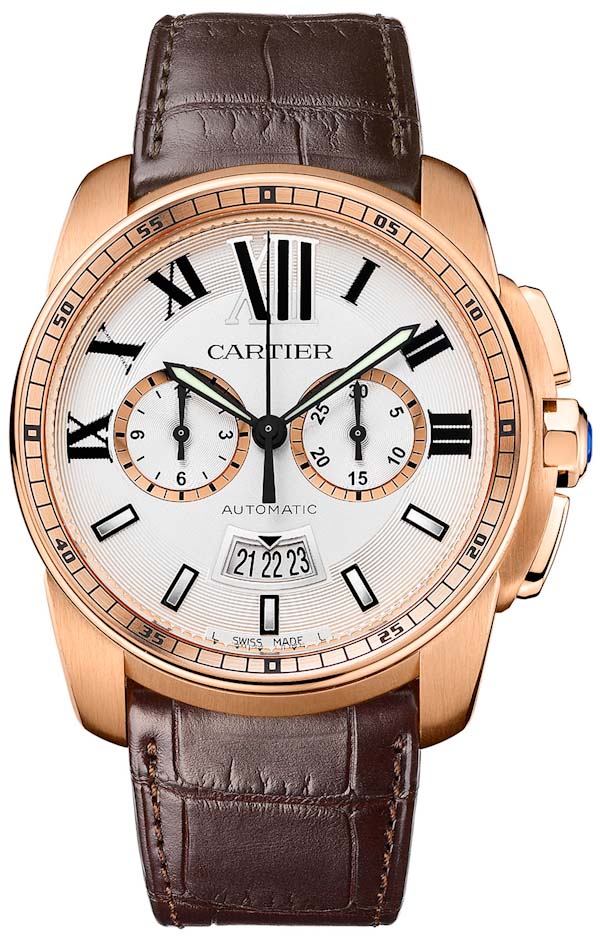