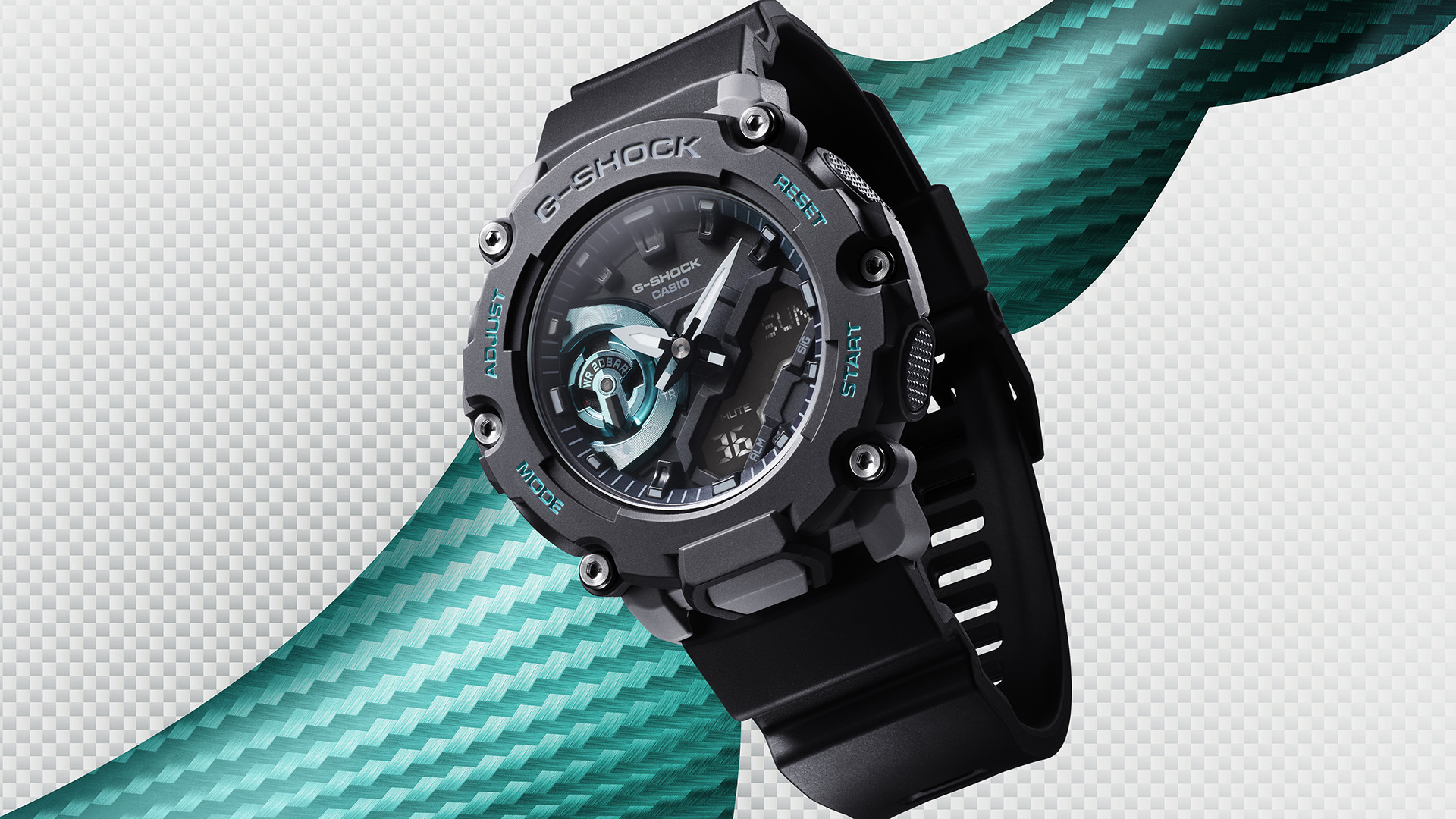 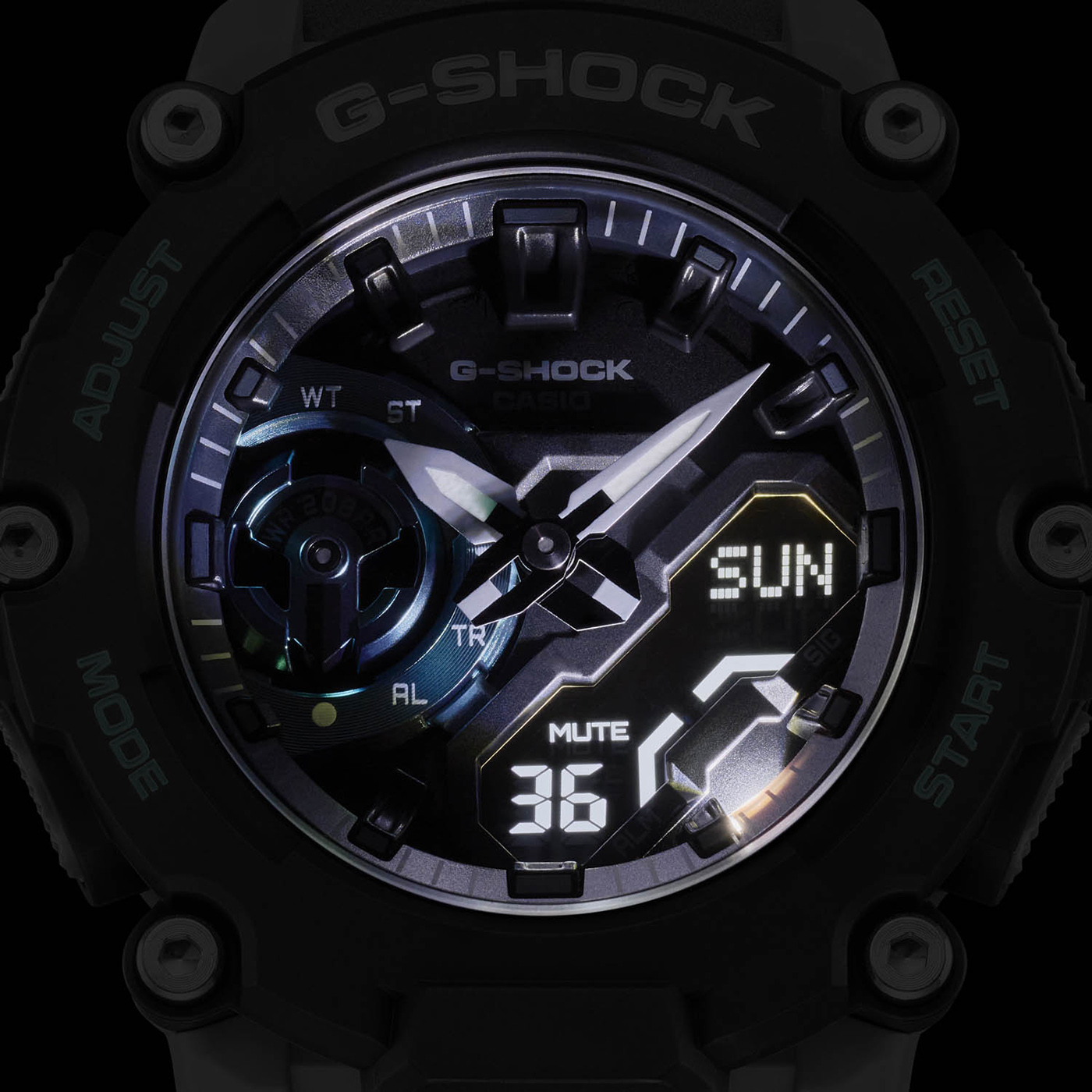 Perhaps the greatest strength of Casio’s keystone G-Shock line, beyond even its immense durability and functionality, is the sheer overwhelming breadth of the series. There’s a G-Shock for nearly every taste and budget, from playful sub-$100 digital throwbacks all the way up to hand-crafted exemplars of Japanese craftsmanship in the exclusive MR-G sub-line with $8,000 price tags. Although the diversity of Casio’s current G-Shock offerings is wider than ever before, the brand has consistently made efforts to bring the technical and material advancements of top-end models to its more democratically priced offerings. Casio’s newest G-Shock reference is a perfect example of this drive towards affordable amenities, bringing the brand’s resilient Carbon Core Guard structure and a streamlined slim profile to one of its most affordable analog offerings. The new Casio G-Shock GA2200 series helps to raise the bar for the brand’s entry-level G-Shock offerings, packing improved shock protection, new three-layer case construction, and a trio of vibrant colorways into a bold and charismatic new layout. 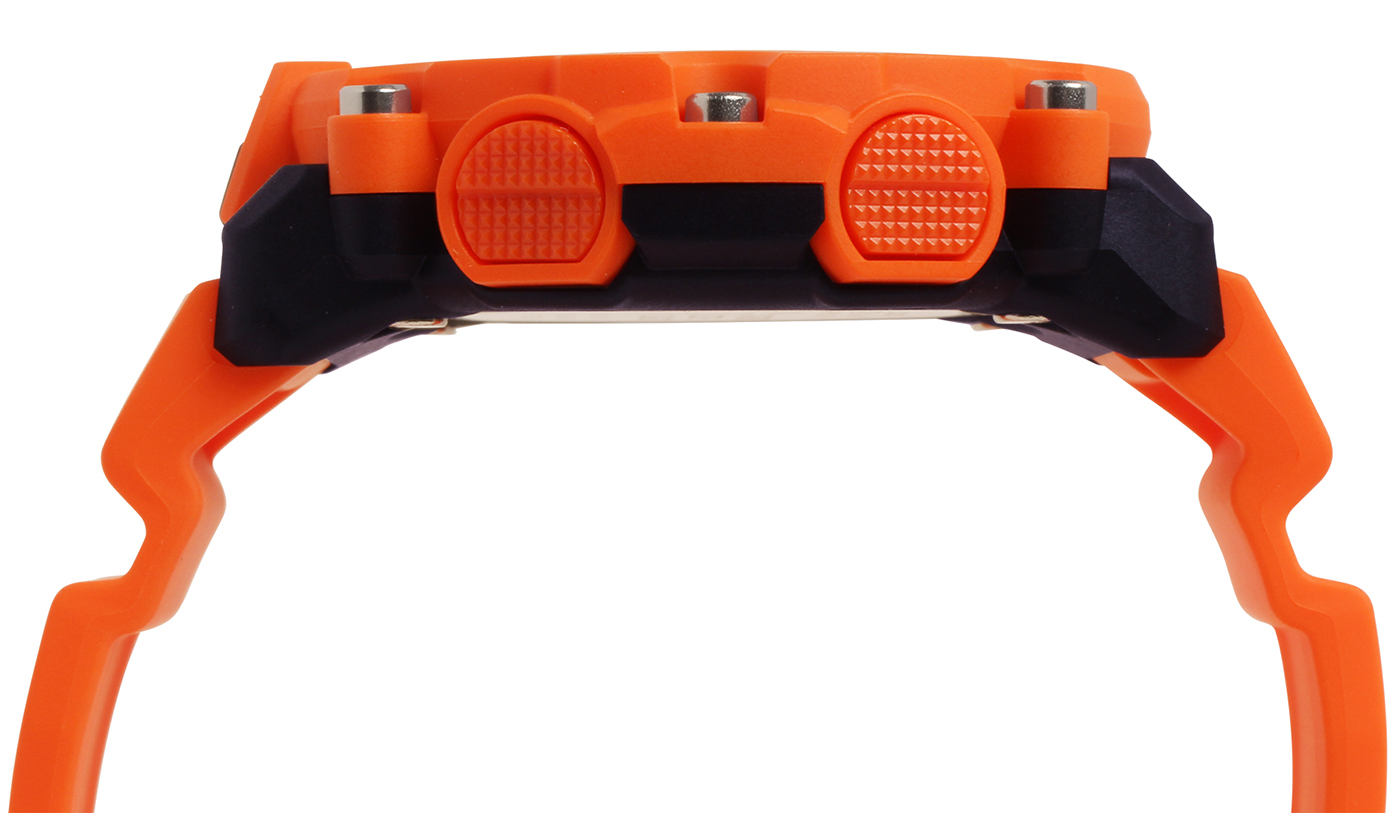 While likely maintaining the G-Shock series’ sense of massive wrist presence at 47.1mm across, the Casio G-Shock GA2200 series trims down its thickness to 12.8mm. This may not be particularly thin by general watchmaking standards, but given the line’s propensity toward 15mm cases and thicker the more slender profile will likely set it apart from its stablemates on the wrist. The crownless case shape takes a rounder, sleeker approach to classic G-Shock design cues, but maintains visual touchstones like hex screws on the wide smooth bezel, a wide trapezoidal pusher at 6 o’clock for the LED dial illumination, and broad recessed pushers at 2 o’clock, 4 o’clock, 8 o’clock, and 10 o’clock with knurled tops. In short, this should likely form a stylistic middle ground between the standard G-Shock aesthetic and the more compact look championed by its GA2100 “Casioak” stablemate, appealing to those who want the look and feel of a traditional G-Shock with less of the often-overwhelming visual mass. To slim down the profile of the GA2200, Casio constructs the case with a three-part sandwich-style design. The bezel and pusher surrounds form the top layer of this sandwich, secured by the bezel screws to a lower layer that includes the short squared-off lugs and lower case sides. Both of these layers are made of G-Shock’s signature resin and connect to the stainless steel caseback with another set of four screws on the rear of the case. Casio uses this multi-layer approach to play with color on the GA2200, as well. The base G-Shock GA2200BB-1A keeps things simple with a black-on-black approach, but both the GA2200M-1A and the GA2200M-4A use the separate layers for a two-tone look. For the GA2200M-1A, the two-tone contrast is muted with a black bezel enlivened with electric turquoise accents over a putty gray lower layer. The GA2200M-4A plays up the more daring side of G-Shock styling, however, opting for a flaring traffic cone orange bezel over a black lower layer. These two-tone designs add a strikingly unique character in images, but also visually break up the case sides of the GA2200 design for an even slimmer look. As with all G-Shock models, Casio rates the GA2200 line for a dive-ready 200 meters of water resistance. 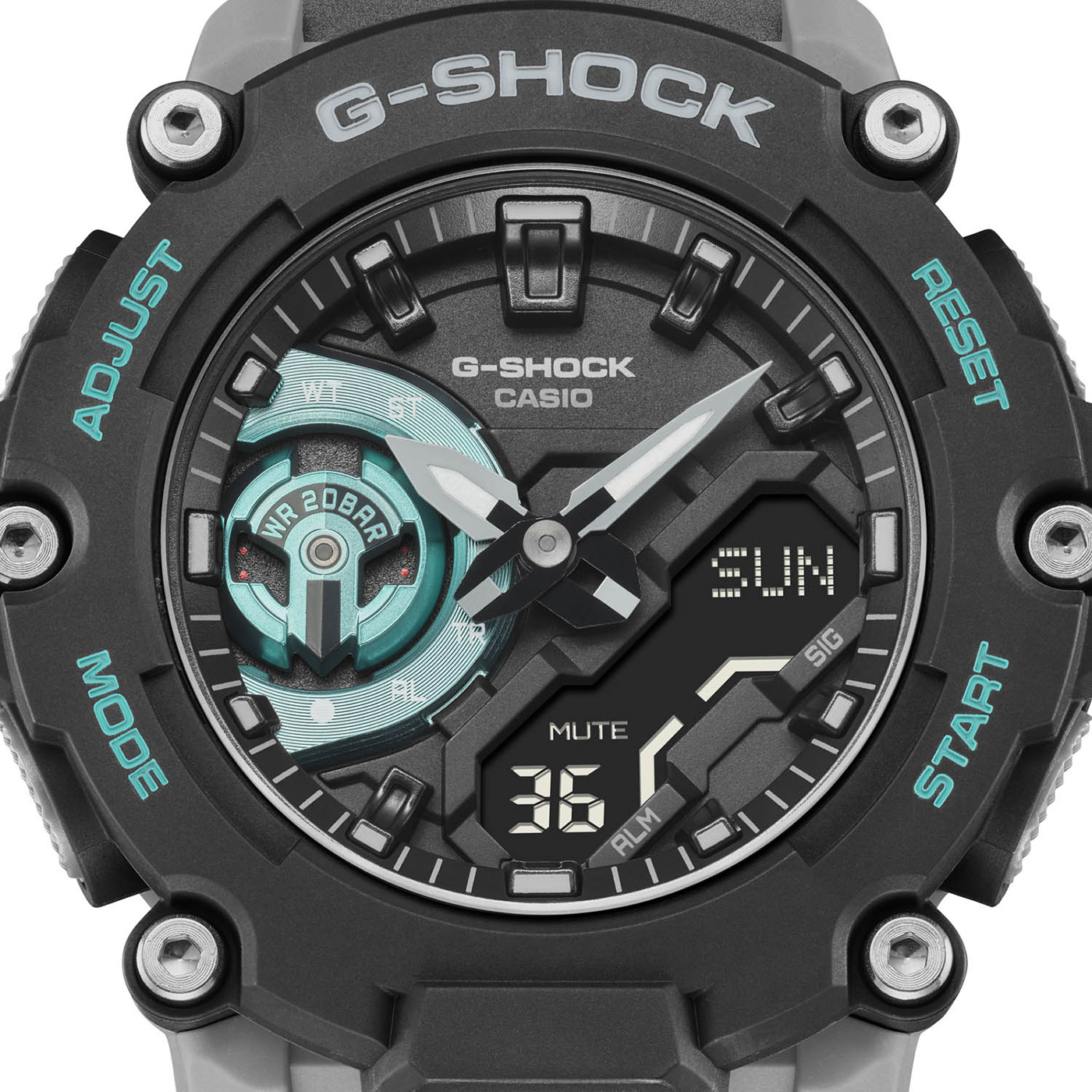 Casio’s dial design for the G-Shock GA2200 series is a chunky and simplified evolution of the brand’s enduring ana-digi concepts. This series runs on the same movement as the smash hit G-Shock GA2100 “Casioak,” and this shared platform shines through in the layout with its 9 o’clock function subdial and the slanting digital subdial running from 3 o’clock to 6 o’clock. Where the GA2100 series aims for visual simplicity with these elements, the GA2200 instead maintains some of the hallmarks that make the classic G-Shock aesthetic so unique – the bold forms, the sense of immense visual depth, and the ornate blend of surface details. The 9 o’clock subdial is a solid example of this philosophy, with a brake disc-inspired grooved PVD outer ring flanking an ornate cutout disk hand. The inner bezel surrounding the digital subdial, with its angled surfaces and tall profile, continues this trend, as do the raised details on the main dial as well as the heavily grained dial surface. There’s a tough, industrial look to these elements that stays true to the classic G-Shock design language in images, but the usage here is more balanced and moderate than many of its stablemates. Each of the three GA-2200 colorways interprets the look in a markedly different way. As with the case, the dial of the GA2200BB-1A takes on an all-black look, with a low contrast blend of grays across the subdials, tall curving indices, and pointed sword hands with exaggerated counterweights. While the look is aggressive and stealthy, the lack of stark blacks, whites, or accent colors could potentially lead to legibility issues. The GA2200M-1A takes a more balanced approach, with pale gray accents for the handset to aid legibility along with a vibrant aquatic turquoise PVD tone for the subdial and hand at 9 o’clock. To keep its wilder, more aggressive look, the GA2200M-4A adds even more color courtesy of medium gray hands and applied indices, complemented by bright orange touches on the indices and 9 o’clock subdial. 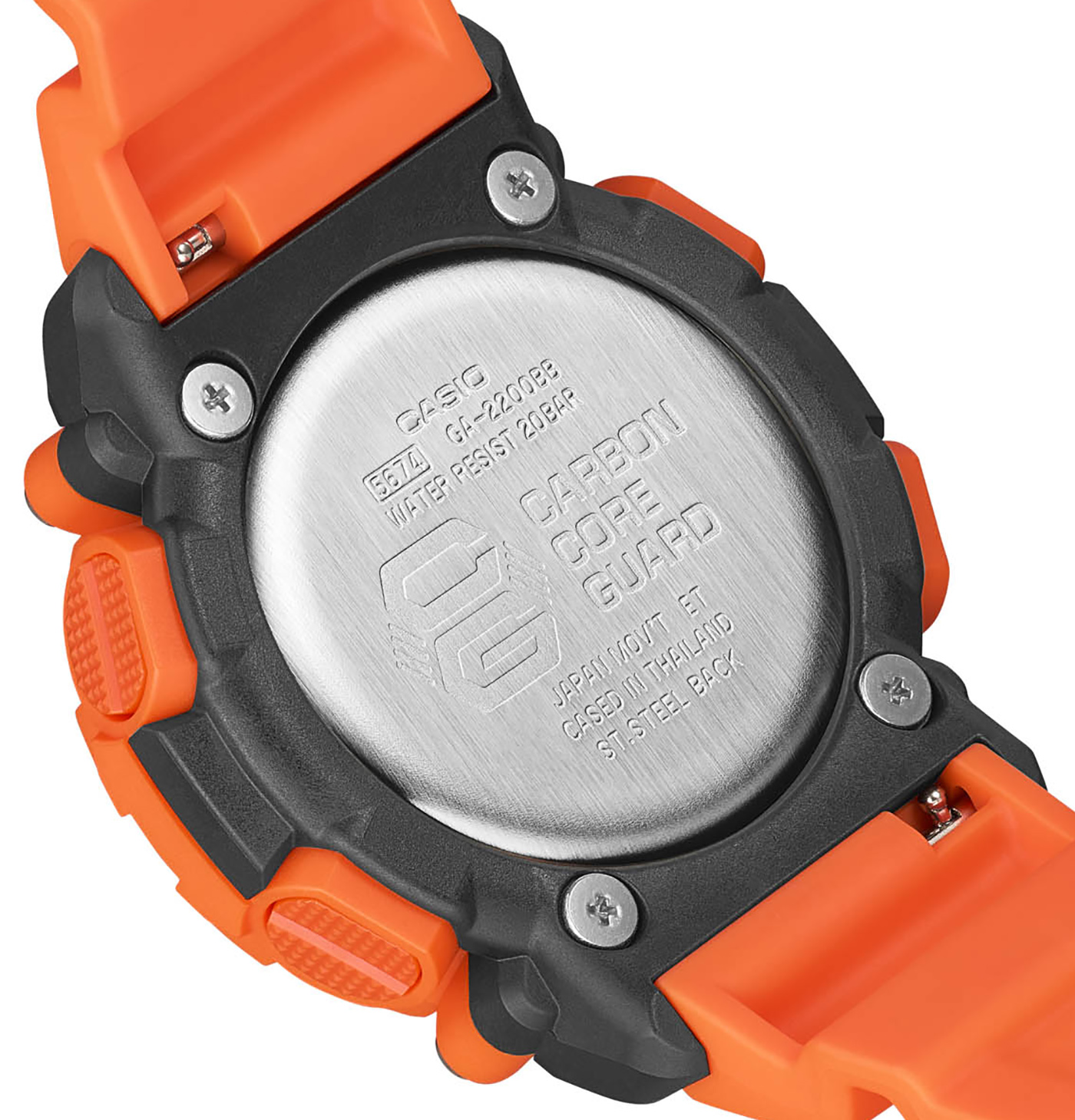 Inside the Casio G-Shock GA2200 series beats the brand’s in-house Module 5611 quartz movement. Insulated from impact by Casio’s internal Carbon Core Guard structure, in typical G-Shock fashion the Module 5611 offers a broad range of complications. These range from a 24-hour chronograph with 1/100 second measuring capability, a double LED illumination system, a perpetual calendar accurate through the year 2099, a 24-hour countdown function, five daily alarms, a world timer, and an hourly radio-controlled time signal for greater accuracy beyond the movement’s basic +15/-15 second per month rating. Casio claims a respectable battery life of three years for the Module 5611. The brand finishes the GA2200 series with a G-Shock standard accordion-style resin strap with a quick-release function. For the GA2200BB-1A and the GA2200M-1A, this strap is in simple black, but the louder orange colorway of the GA2200M-4A is continued with a matching signal orange resin strap. 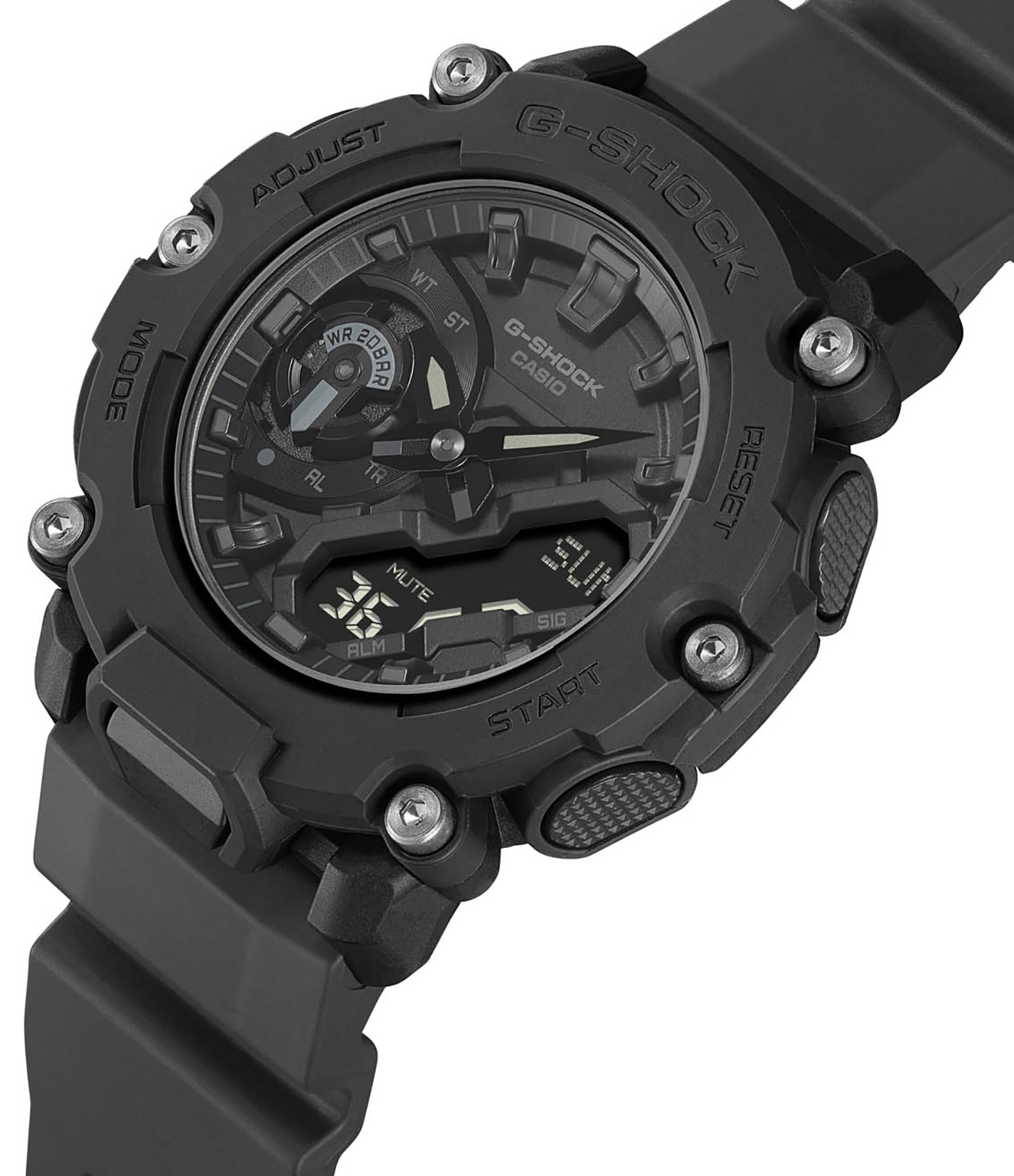