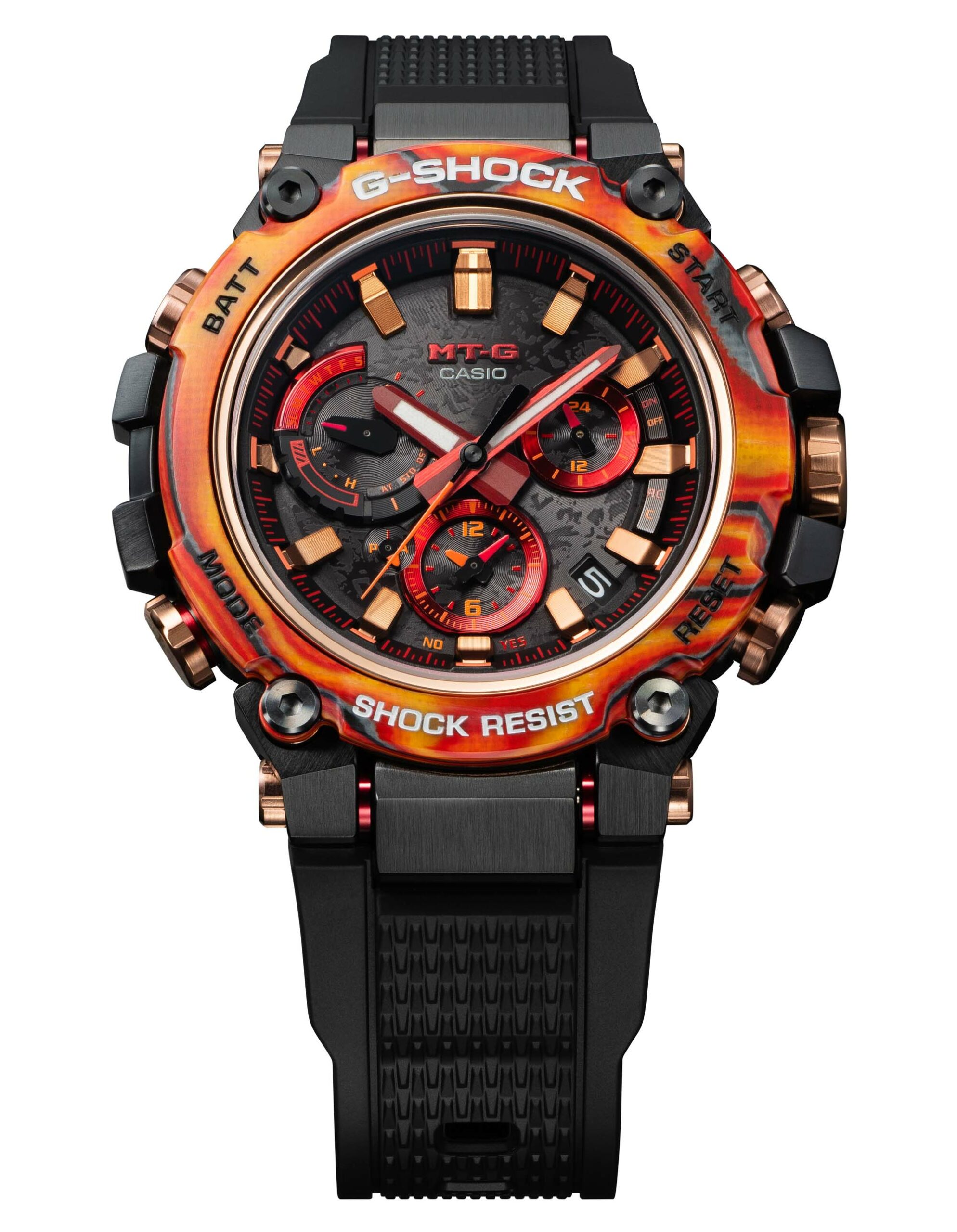 2023 is the 40th anniversary of the Casio G-Shock, which originally debuted in 1983. Since then, the Japanese watchmaker has catapulted to being both a major product manufacturer and a fixture of popular culture. Casio G-Shocks are all around the world and continue to be a primary focus of Casio’s research and development team. What do the boys in Tokyo have in store for us this year? That’s a good question, but what we can tell you is that there will be a series of 40th-anniversary products and initiatives — so many that Casio couldn’t wait until 2023 to start mentioning them! 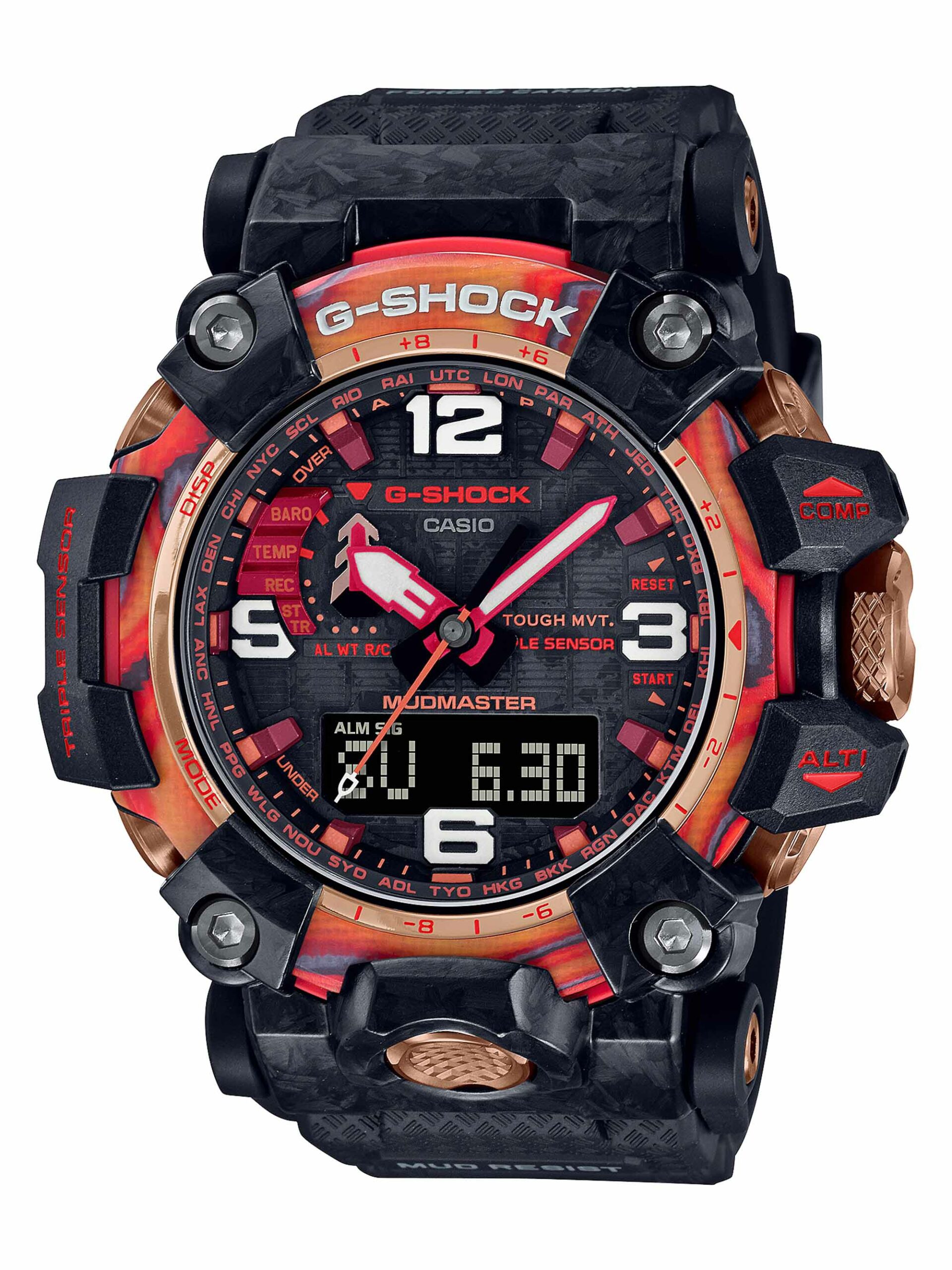 These two Flare Red watches feature a multi-colored bezel and case component produced by Casio from layered carbon. Casio says that the mixture of red and black in the carbon material is evocative of sun flares. I also suspect that black and red is the overall color palette associated with the Casio G-Shock 40th anniversary branding, meaning that we will see more such colorways in upcoming 40th anniversary G-Shock products. It is also important to mention that given the nature of how this blended carbon material is produced, each component will be unique-looking with its own balance of colors and swirls. 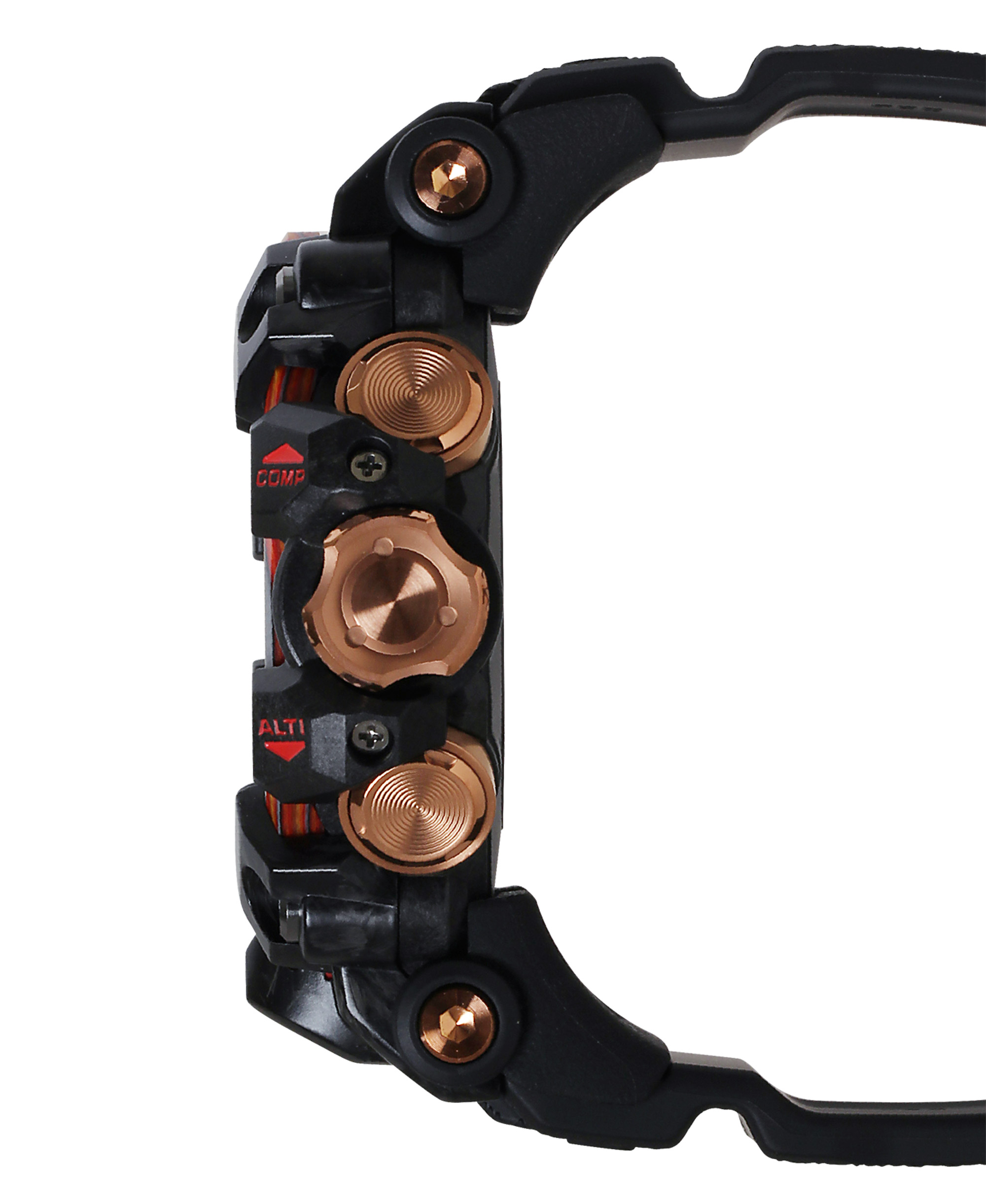 In general, carbon is one of Casio’s favorite materials to work with these days. Casio skillfully uses carbon as a lighter and stronger material for various aspects of watch case construction. Carbon also presents a number of artistic opportunities that allow for various organic textures and visuals. Here we see what Casio can do with red as it blends from orange to deeper and darker hues next to the black. Casio adapts the dials of these two watches from both the MTG-B3000 and the GWG-2000 collections to match the bezels, and they seem to be right in time for Halloween given their fiery personalities. The watches also have special casebacks that commemorate the G-Shock 40th-anniversary celebration, along with unique packaging different from most other models in these collections. 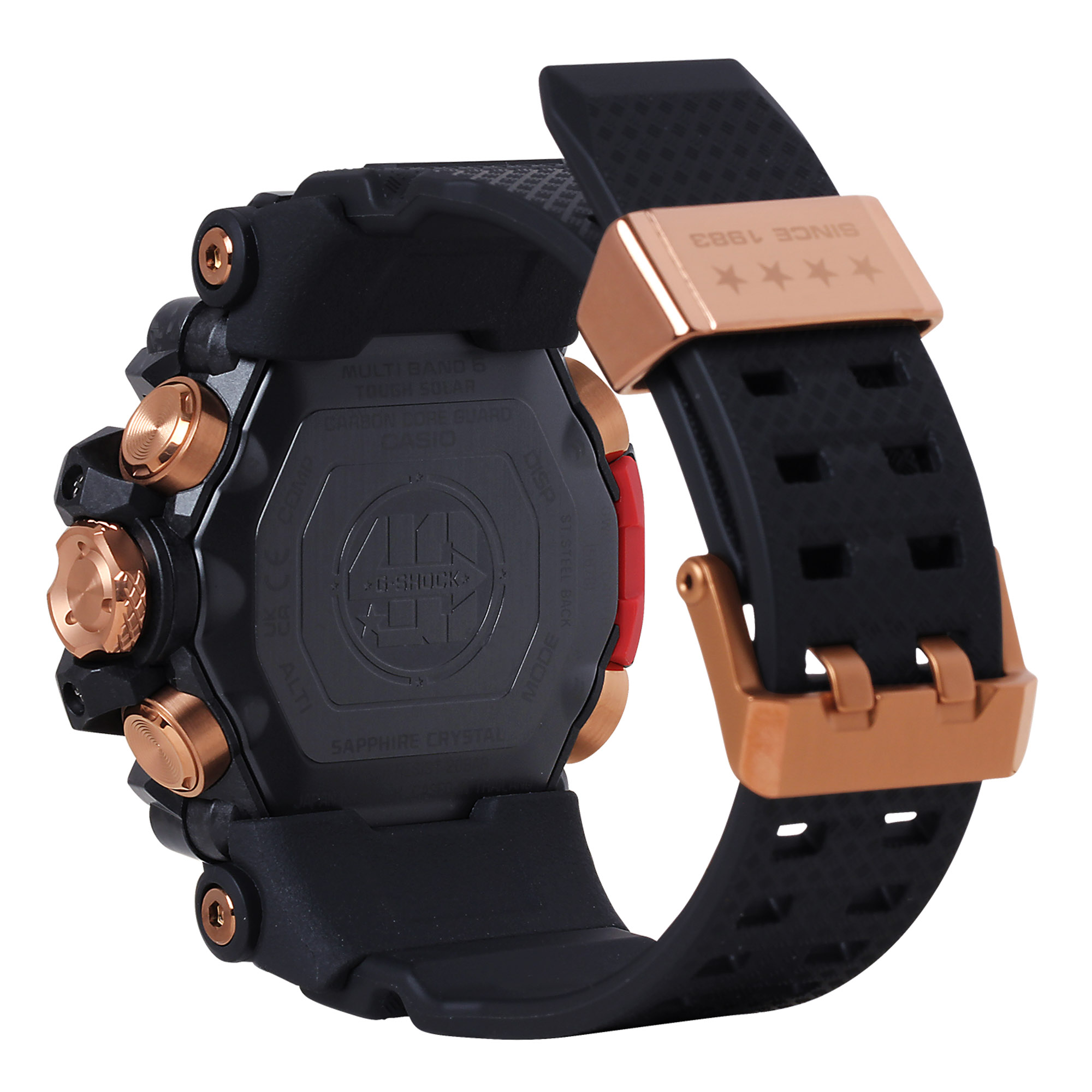 Both of these limited models (Casio isn’t clear on how many of each piece will be produced) are around the same price and represent higher-end G-Shock products, in general. The slightly more accessible of the two watches is the reference GWG2040FR-1A, which is from the Master of G Mudmaster collection. This is also going to be the slightly larger of the two limited edition Flare Red models. Going into the particular tech specs and functionality of these two watches is a bit beyond the scope of this article, but I’ve linked the reference numbers of the watches to their product pages on Casio if you want more details about how they work, the case dimensions, and their features. The Casio G-Shock GWG2040FR-1A costs a few hundred dollars more than a standard Mudmaster collection piece given the special materials, and this is the piece if you want a really serious outdoor watch with these cool flame-style colors. 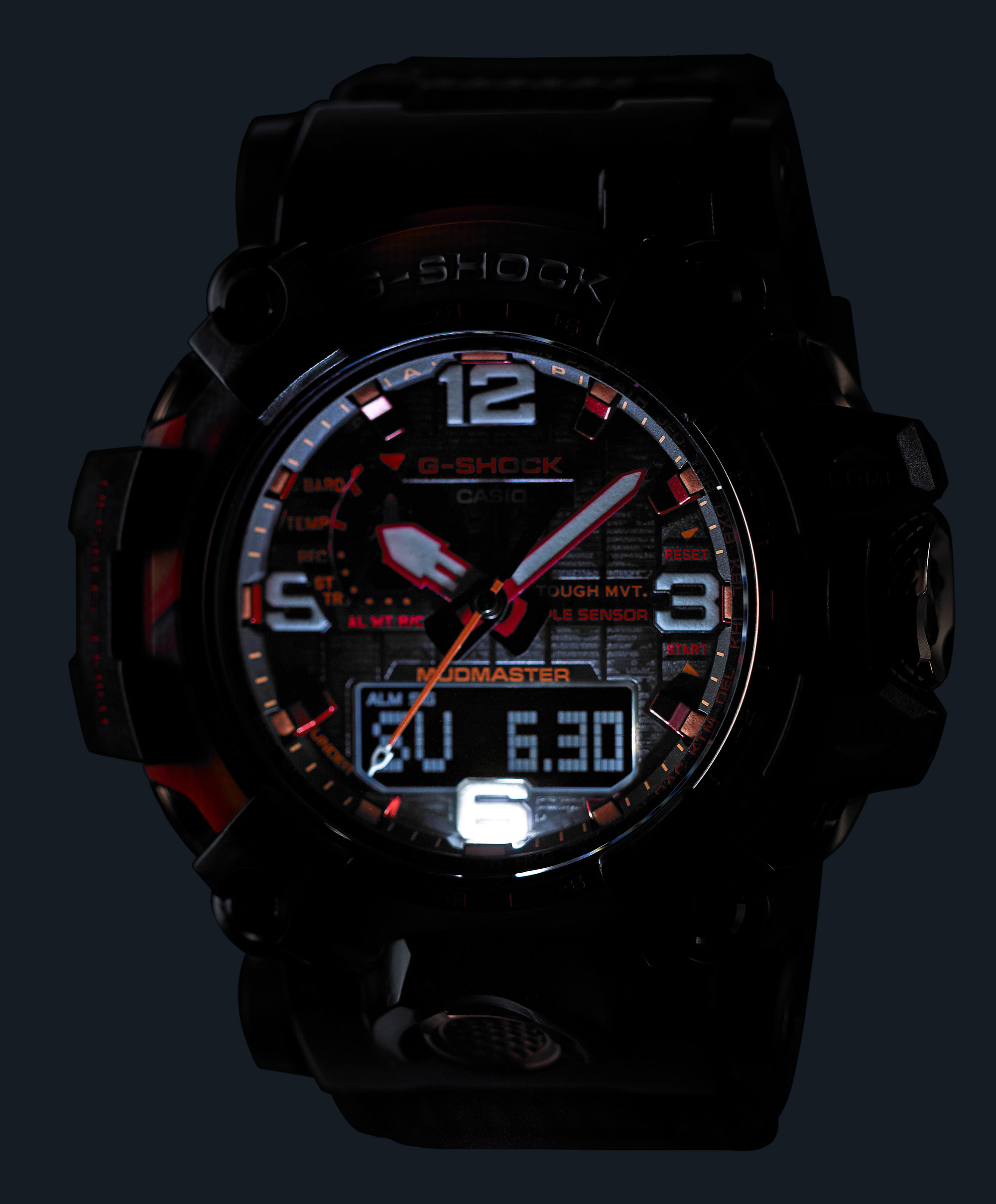 The more dressy or urban of these two new limited-edition 40th anniversary G-Shock watches is the reference MTGB3000FR1A. This builds on the still new Casio G-Shock MTGB3000 collection (reviewed on aBlogtoWatch here) but with the Flare Red carbon case components and particular dial style. The more I see these watches, the more the Flare Red visuals remind of lava versus sun flares (the flares are actually probably the more dangerous of the two things). So maybe volcano-themed nicknames would make sense for these timepieces with Casio’s “vulcan-churned carbon.” The Casio MTGB3000 collection is thinner, meant for comfortable daily wear, and like the Mudmaster makes excellent use of Casio Bluetooth connection so that (among other things) the time is always accurate even when you are traveling. 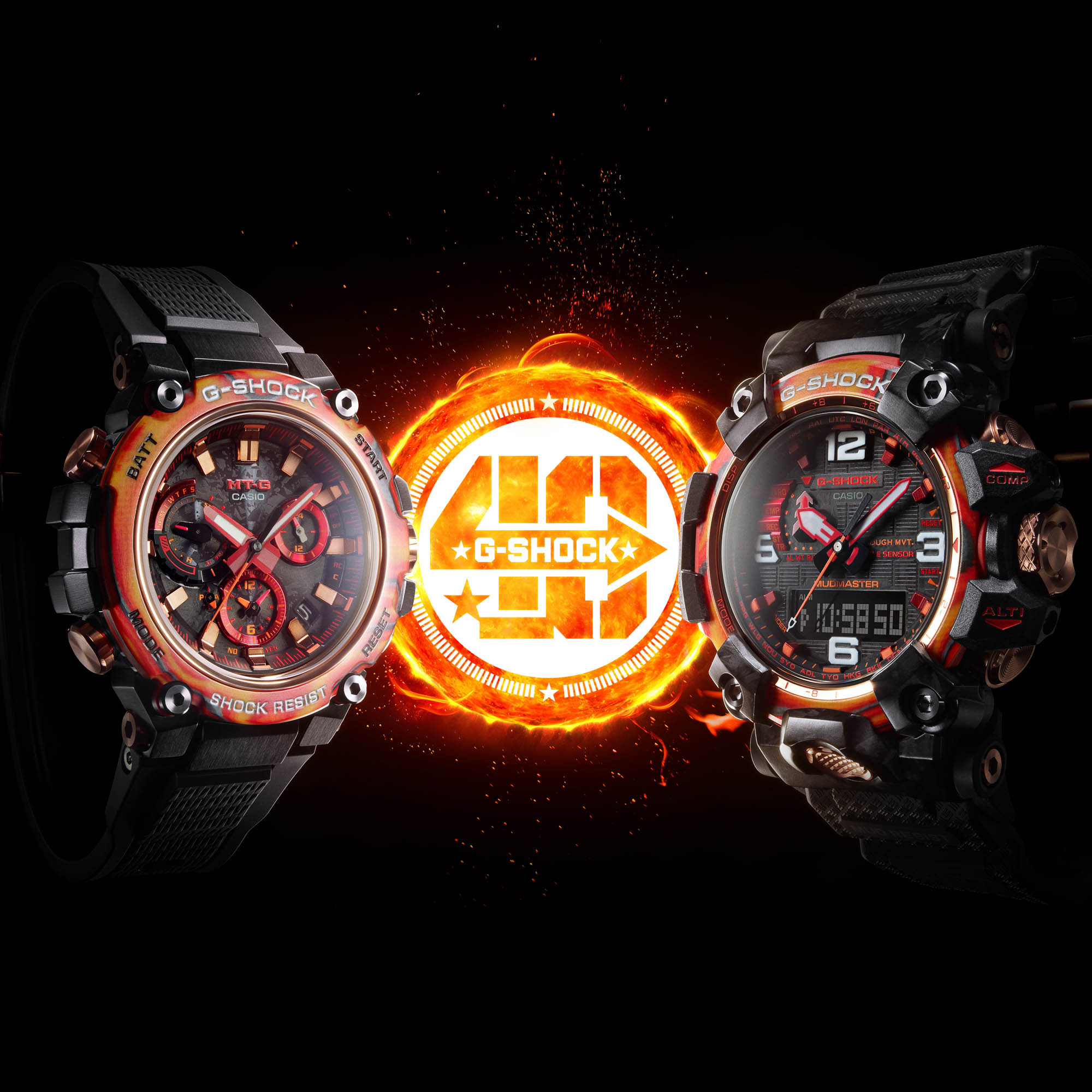 In addition to the black and fire-red color themes of these watches, they are accented with rose gold tones in the form of the metal hardware such as pushers and strap buckles. Both of these watches are cosmetic variations on existing Casio watches, and it will be interesting to see what other products Casio focuses on over the next year as it spreads out attention on the important 40th anniversary of G-Shock. Price for the Casio G-Shock Master of G Mudmaster GWG2040FR-1A is $1,100 USD, and price for the Casio G-Shock MTGB3000FR1A is $1,300 USD. Learn more at the Casio G-Shock website here.