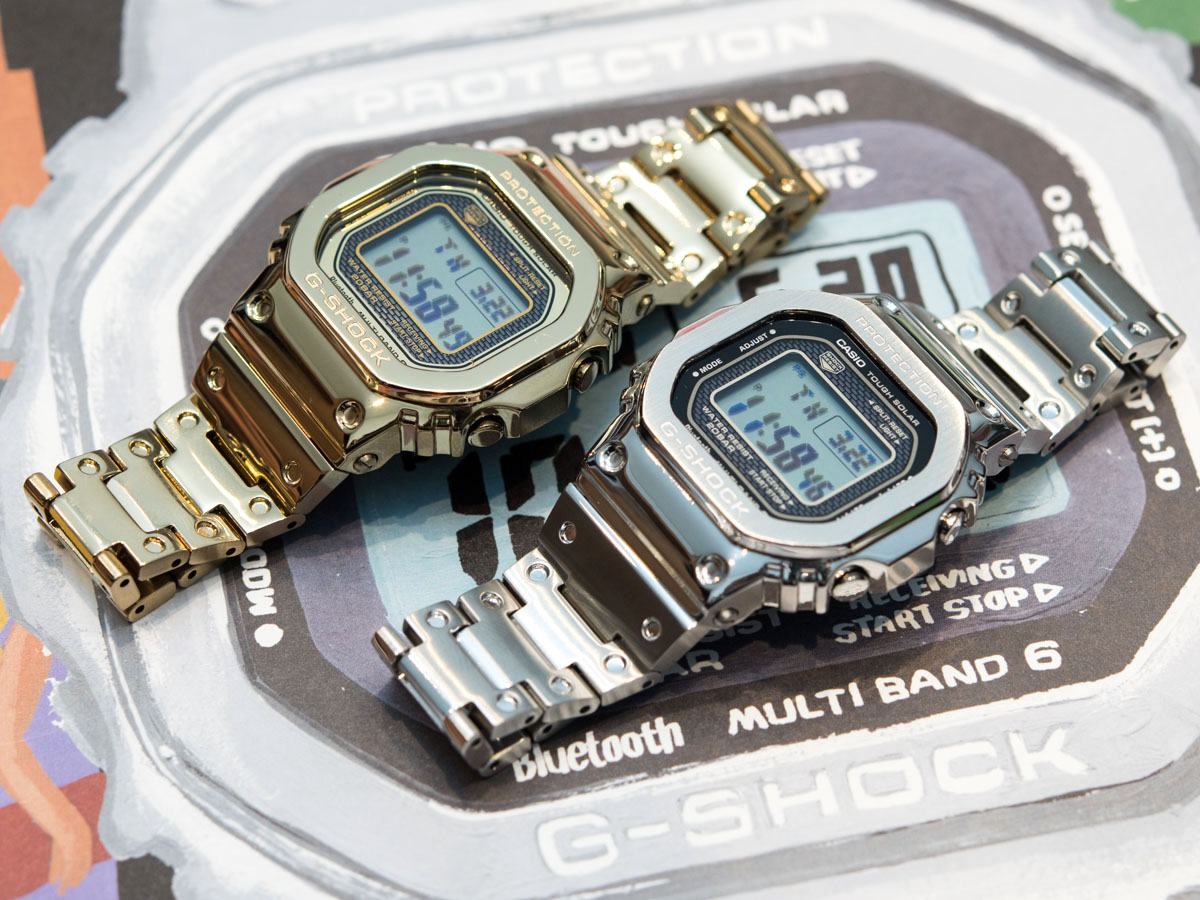 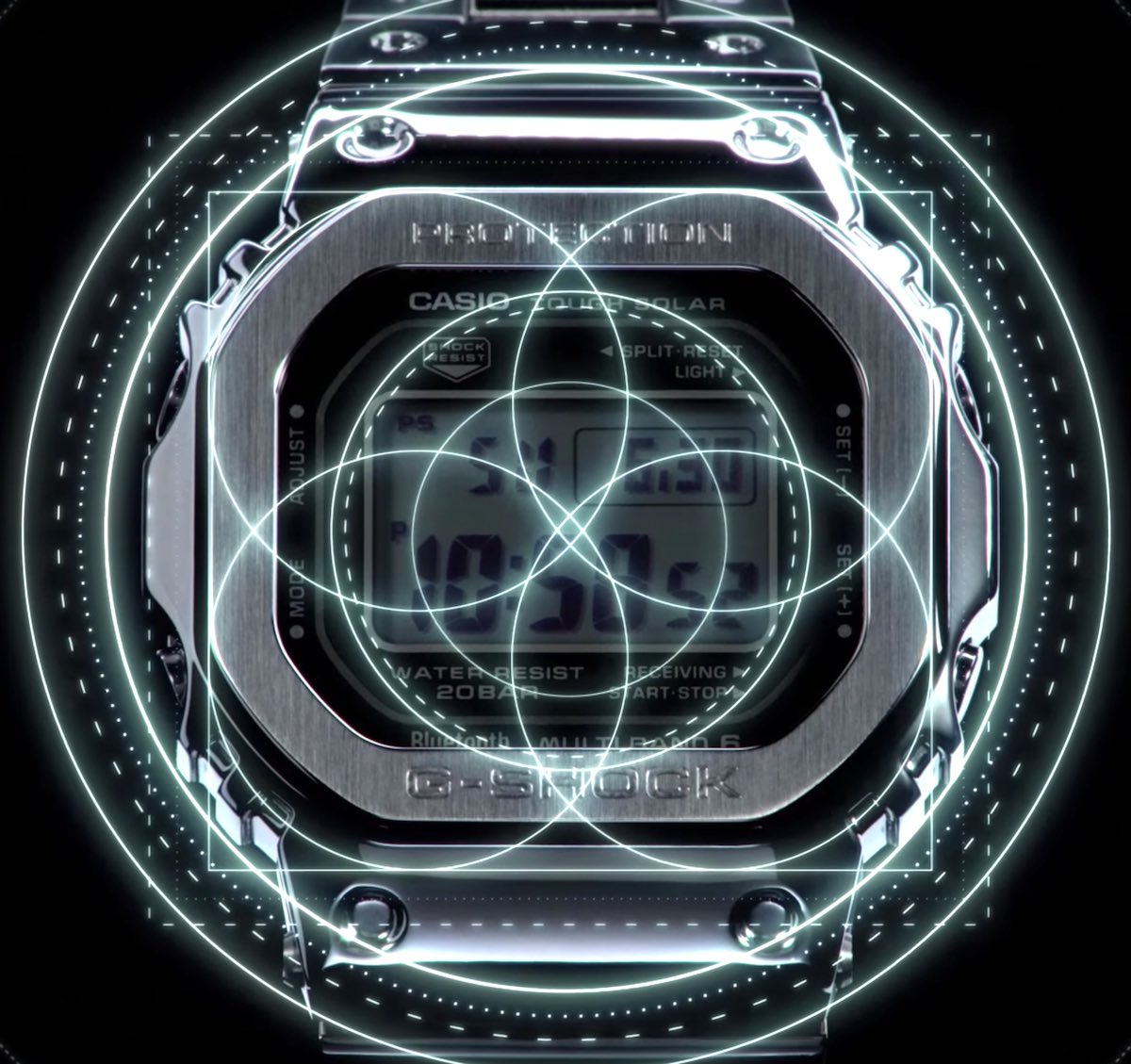 On the wrist, both of these are a joy to wear, albeit that is for different reasons. The all-steel version comes with a brushed bezel and highly polished (not coated!) lug structure as well as links, each of which feature both brushed and polished elements. Being a fan of the 5000-5600 Series (see my review of a much more affordable, “Kikuo Ibe-style” 5600 here), this 49.3 by 43.2 by 13.0mm case with its proportionate octagonal bezel looks fantastic. The play between the brushed and polished elements is quirky, almost as though it showed a lack of experience at Casio when it comes to crafting this shape from this material. That said, bearing in mind that this is a $500 watch and not a $20k Royal Oak, it is clear that they had to operate with wider and larger surfaces to keep costs and manufacturing difficulties at reasonable levels. 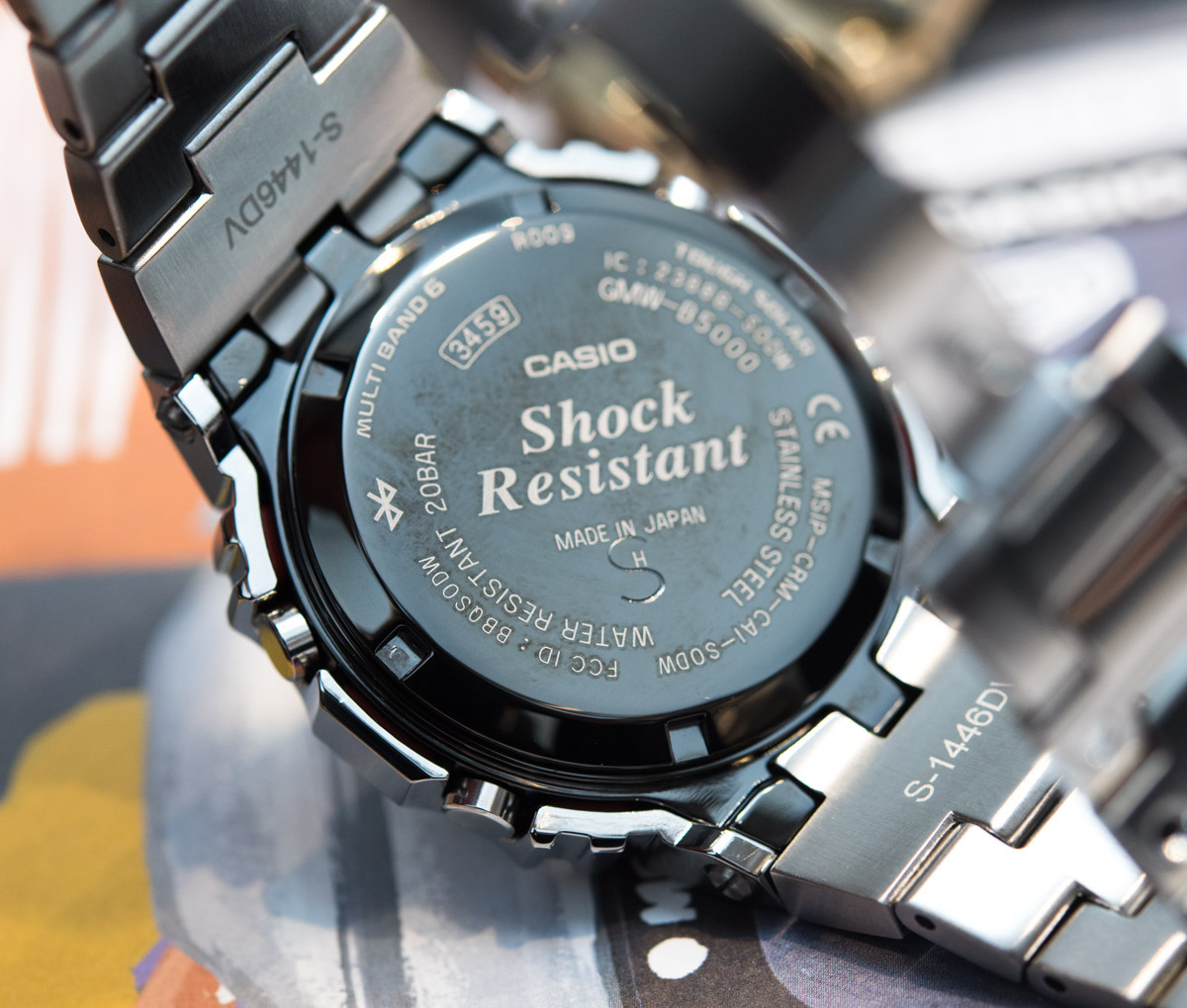 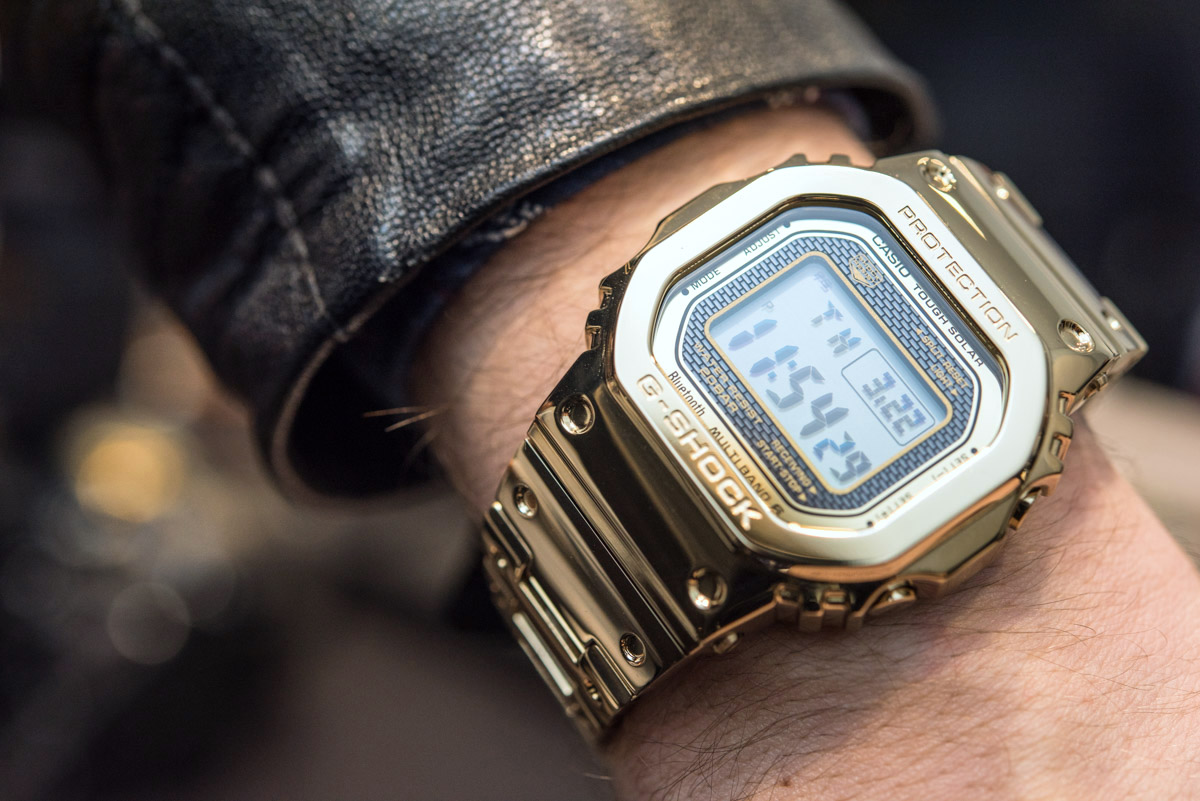 Now, the IP Gold version is an entirely different beast. In fact, it’s insanely vulgar. Where the all-steel wants you to appreciate the 5000 in a more timeless material usually associated with holier-than-thou watches, this gold coated version in its all-polished look laughs in the face of everyone who even thinks about using phrases like “holier-than-thou.” I still can’t force myself to dislike or disrespect it though, because this gold monstrosity will outperform most other watches when it comes to functionality, accuracy, and durability (with one notable caveat that I’ll mention in a moment). If it was on me to pick just one of these, I think I’d go all in and get the gold one, just for laughs… But I won’t. Although I haven’t had an IP Gold Casio before – so I can’t comment on the long-term durability of this coating – I will say that the showpiece that we got to check out already had some notable scratches on its clasp and bezel (visible in some lighting conditions and invisible in others, so the pictures may differ). In truth, I really didn’t like how the watch had shown scratches so quickly – even if I witnessed how these showpieces are not being babied at all (a bunch of watches thrown on the same tray is how they are carried around). 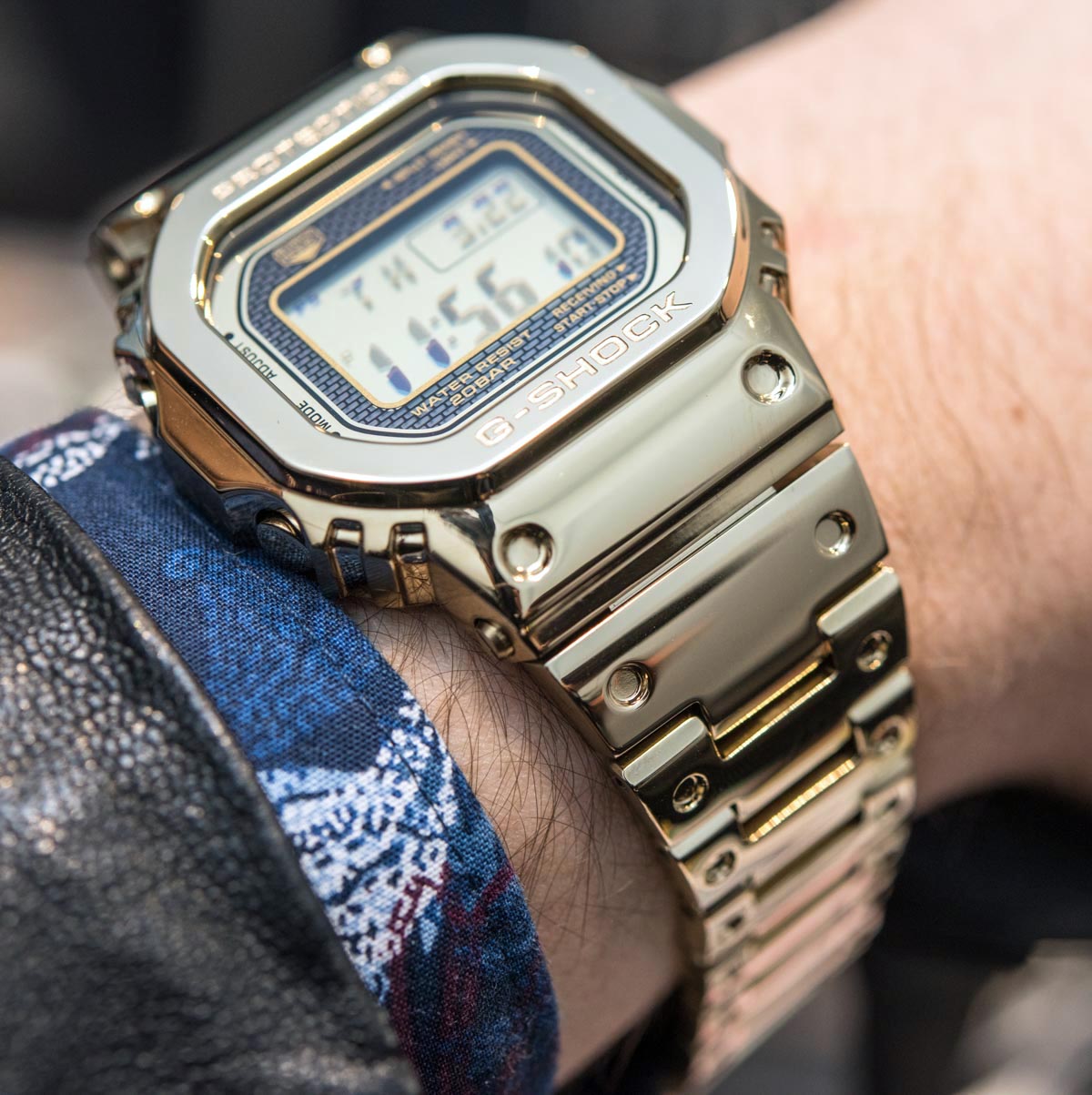 Despite its level-9000 ostentation, when it is perfect, the gold coated version looks absolutely fantastic. It’s as over the top and yet as, ehm, likable (for lack of a better term…) as Mr. T. However, just like Mr. T, the IP Gold and its effect, I am afraid, will fade quickly and when that happens, you’ll most likely be too embarrassed to admit to your friends that you liked it once – even though they did too, but they won’t admit it either. That’s the Catch-22 of the Casio G-Shock GMW-B 5000 TFG-9 – further complicated by the fact that, as far as I know, this coating cannot be refinished or polished, so all the scratches you impose, it will bear until you invest in a replacement case and bracelet. 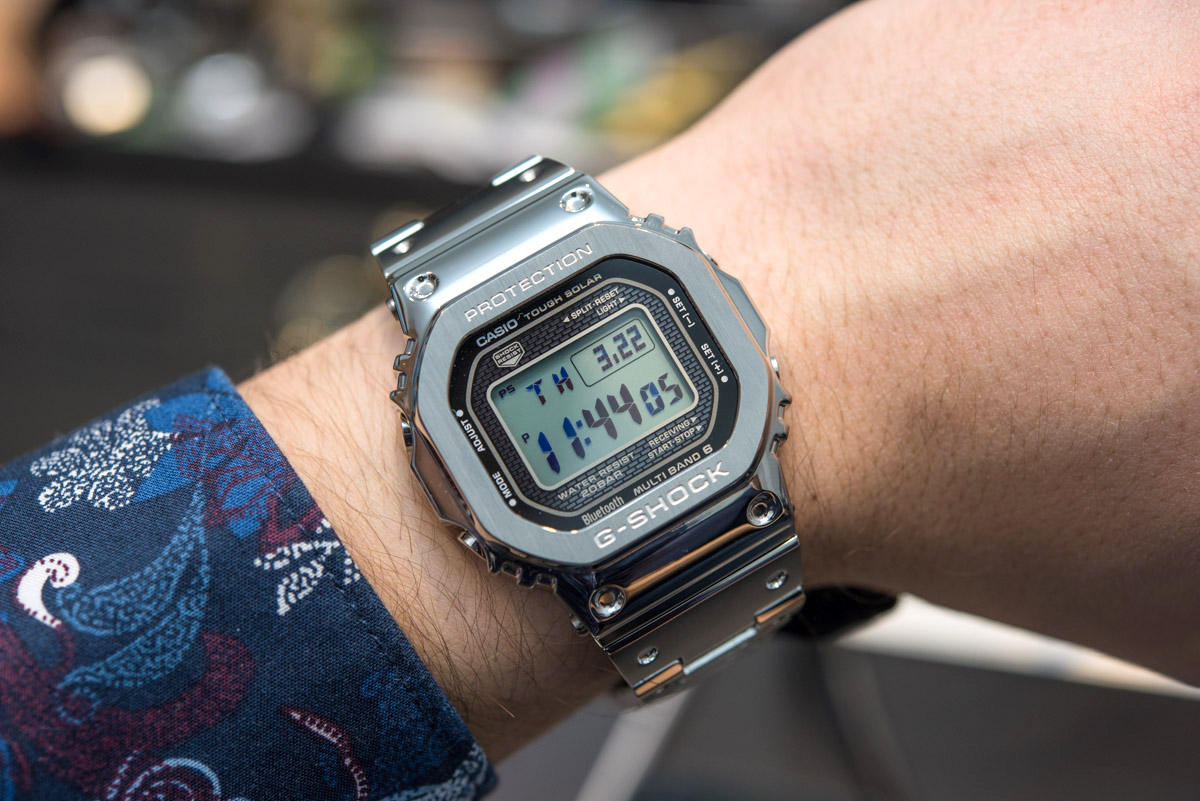 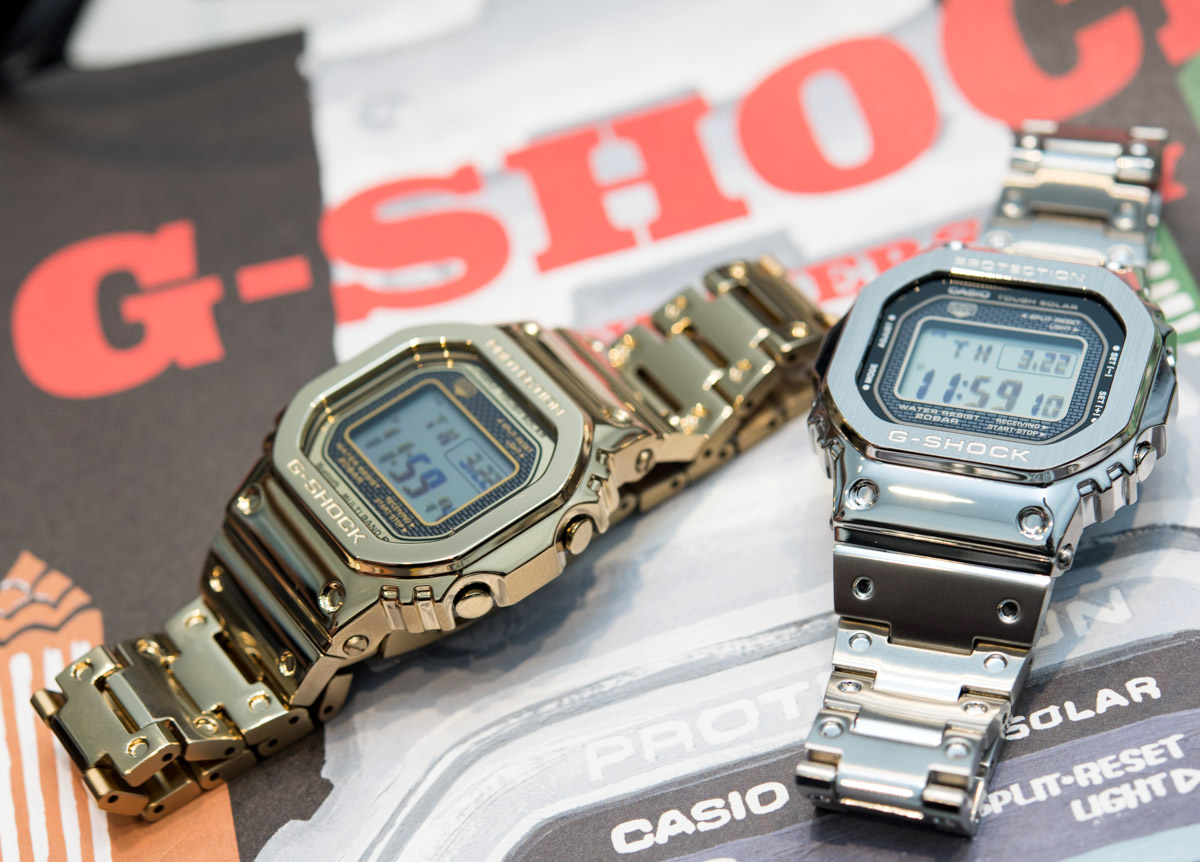 The all-steel version isn’t exactly a Nomos either: it’s a slab of shiny metal with a digital screen, that’s what it is, or at least how it will be perceived by your non-WIS friends and family members. I will say this, however: don’t let that bother you. It’s an all-metal 5000-Series, which is the watch industry equivalent of a hot tub with Angelina Jolie and Jordan in it. Way over the top, totally ’90s (early ’00s at best), and yet, if it were to happen today, you wouldn’t be surprised to see people still get pretty excited about it. After all this said, what is left is getting one of these babes in for testing – the watches, not the ladies, I guess – and seeing if they can be recommended as daily wear. Weight and overall wearing comfort will make it or break it for what has been one of the most highly anticipated G-Shocks since 1983.

Again, the new Casio G-Shock GMW-B 5000 D-1 in stainless steel will retail for $500 and the new Casio G-Shock GMW-B 5000 TFG-9 with the IP coated gold exterior will retail for $600. They’ll be available from mid-April in Japan and from early May 2018 in the US at select Macy’s, select retailers, shopcasio.com, and the G-SHOCK Soho Store. No word on availability in other parts of the world from Casio at this point, but I’d be surprised to see these not be sold in most major markets. gshock.com