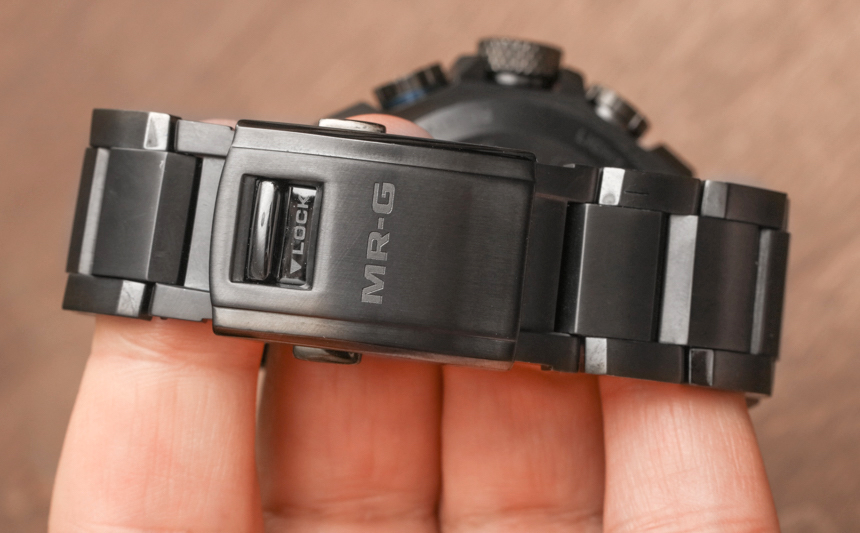 In those terms the world of Mr. G G-Shock timepieces is perhaps the first effort by Casio to make an aspiration lifestyle watch that clearly could do more than what most people who would wear them needed them for, and it was successful even at the beginning in the 1990s. The Casio MR-G is the luxury sport utility vehicle of the watch world. While people in a range of tough fields and active professionals all over the world routinely wear more accessible G-Shock watches for use in their daily lives, the MR-G is for all those guys who graduated to higher-paying jobs. Or the guys with higher-paying jobs that want to be like them. 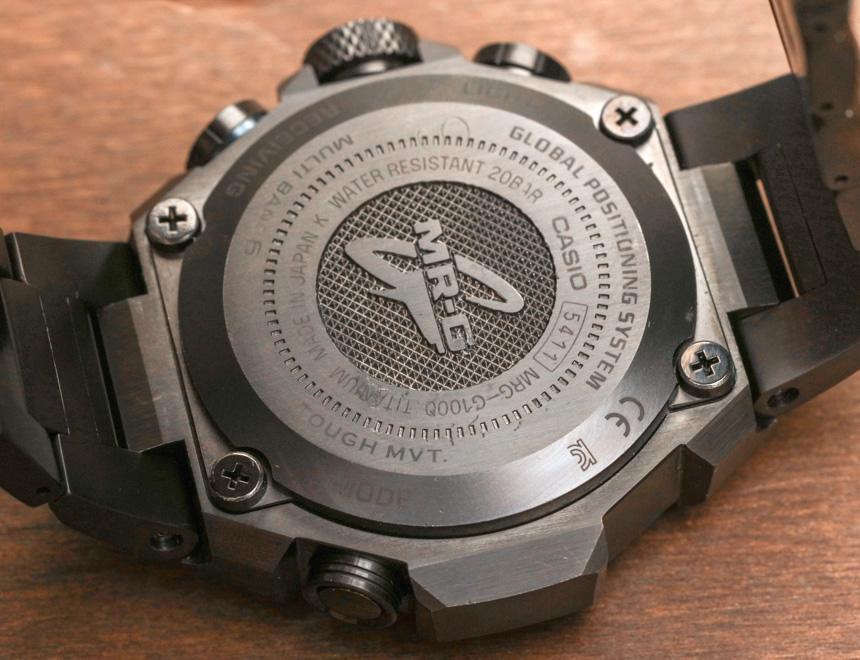 There is nothing wrong with that, and the notion of inspirational product demand is extremely common in the world of high-end watches. With that said it is something people typically associated Casio with much less than say… a high-end Swiss watch maker. Even among the major Japanese watch makers, Casio is by far the most practical of the three. When people think of aspirational Japanese watches they probably think of something like Grand Seiko. I’ll be the first to admit I like both MR-G and Grand Seiko timepieces – they are both different answers to similar questions, though for very different reasons. 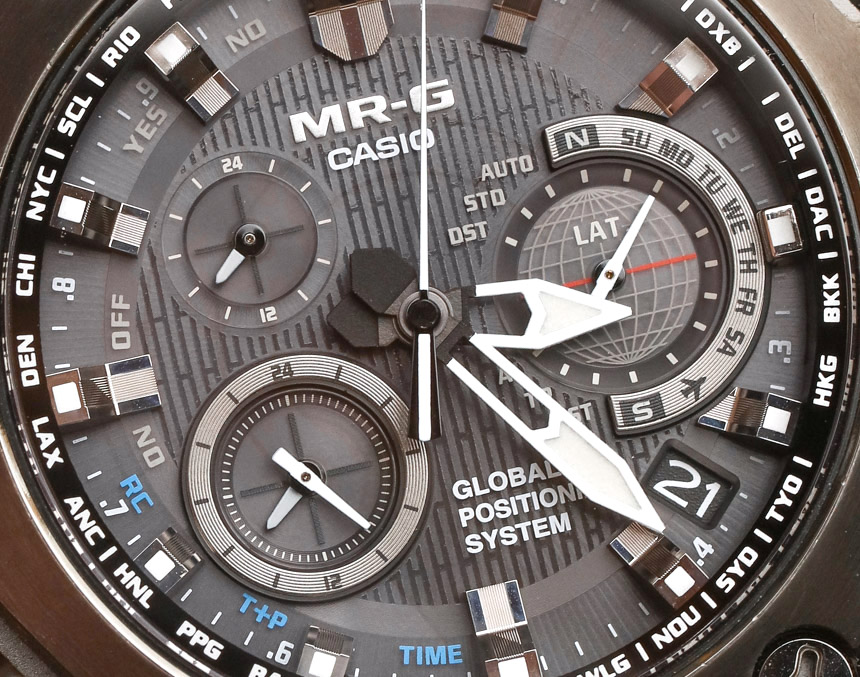 It is the little touches on the MRG-G1000B-1A that you notice over time which are the most appealing. In addition to a high level of comfort and legibility, I like things like the very bright white LED backlight which doesn’t just come on, but rather rapidly brightens from dark to light before dimming out. The dial design is typical analog G-Shock, but with extra emphasis on the hour markers and hands, which is a good thing. Even though the watch benefits from a very good backlight, I would have preferred for the hands to have slightly more luminant. Sadly, the backlight is only activated by pusher and there’s no auto-illumination if you raise your wrist. Another nice detail is how after a few moments of not being moved the seconds hand stops moving and rests at the 12 o’clock position. It does this to conserve battery power in the movement, once the watch is picked up the seconds hand comes back to life. 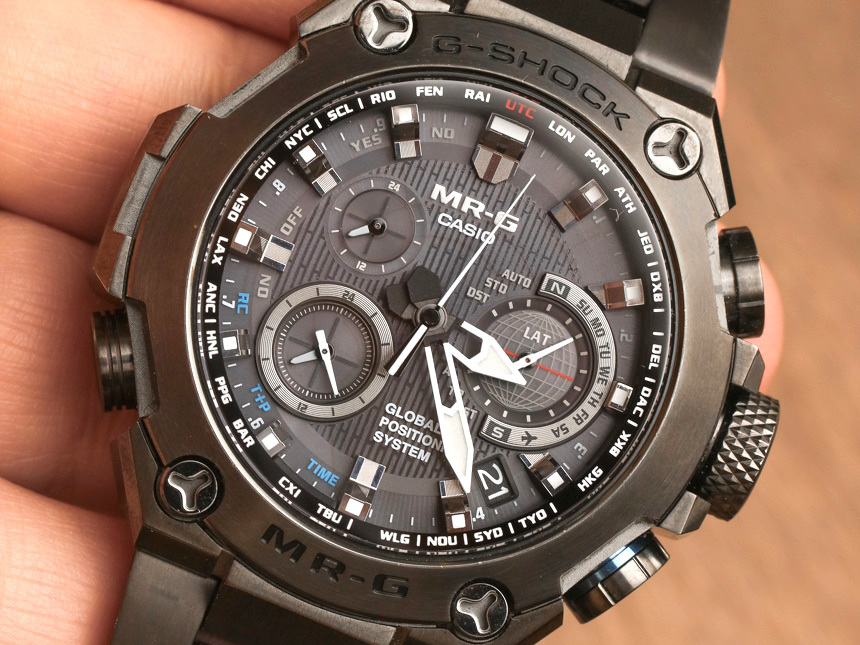 If you closely inspect the dial, you’ll see numerous small indicators and markers used in a variety of settings that you’ll clearly need the instruction manual to fully understand. With that said, the basic information at your disposal while looking at the dial is most of what you’ll need, and setting the watch for simple things like changing the main or secondary time zone while traveling is pretty easy using the Smart Access crown. By default on the dial you have the time, secondary timezone in 24-hour format, 24-hour AM/PM indicator, date, and day of the week. 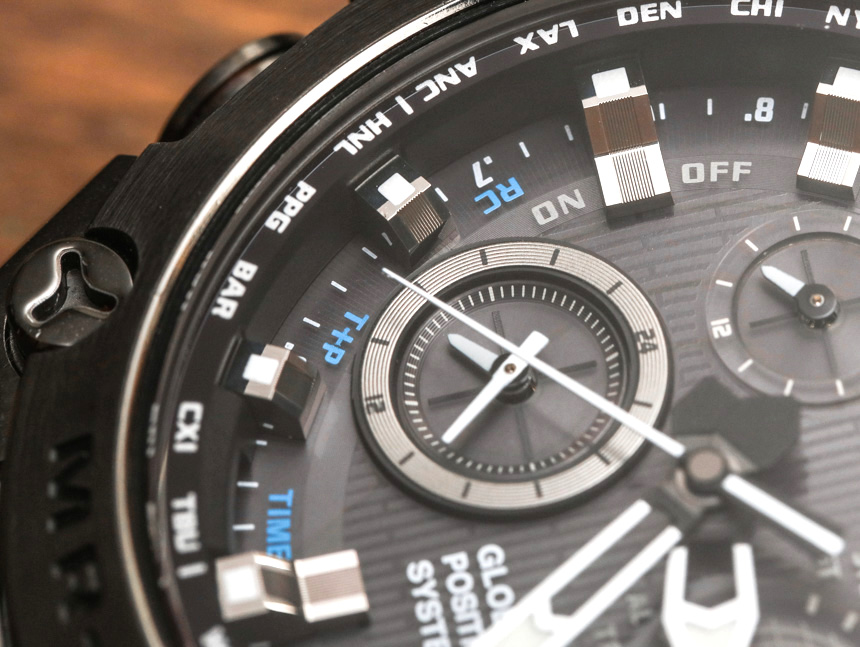 Using the mode selector, you can have further access to a 1/20 of a second chronograph, countdown timer, and alarm set of features. You can set the time manually, but the idea in a watch like this is that the time is set via radio or GPS signals, and that the user just does things like change time zones and adjust DST. For me, the value of this watch is in its more basic features, and if I need a chronograph/stopwatch or other features, I prefer Casio’s all-digital or analog/digital hybrid watch dials given their slightly easier and fast selection of different modes. 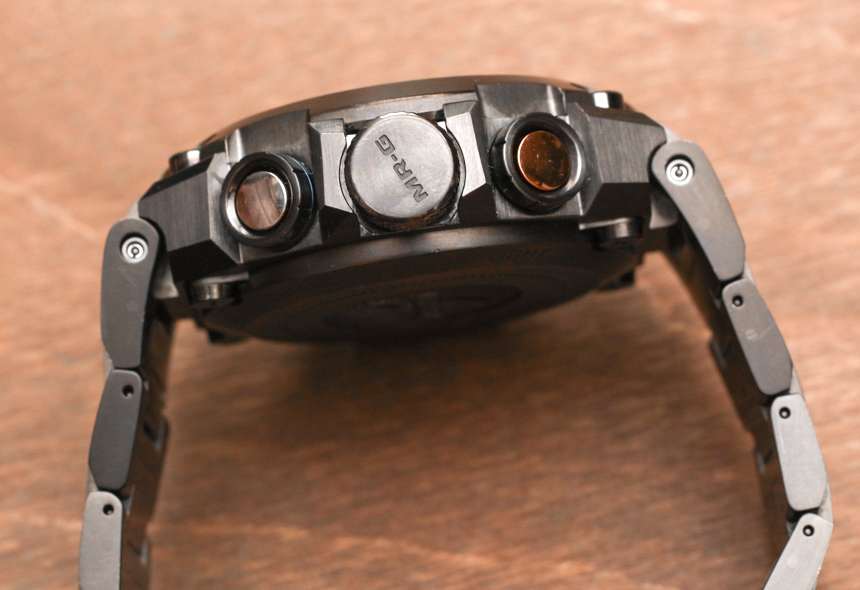 Like all major product families at Casio G-Shock, the MR-G collection continues to evolve. That noted, we don’t get entirely new MR-G models on an annual basis like many other Casio watches. Casio does, however, like to make interesting limited-edition models. In 2016, they released the Casio G-Shock MR-G Hammer Tone MRG-G1000HT-1A (hands-on here), which has some hand-hammered parts with a retail price of more than twice this MRG-1000B model. 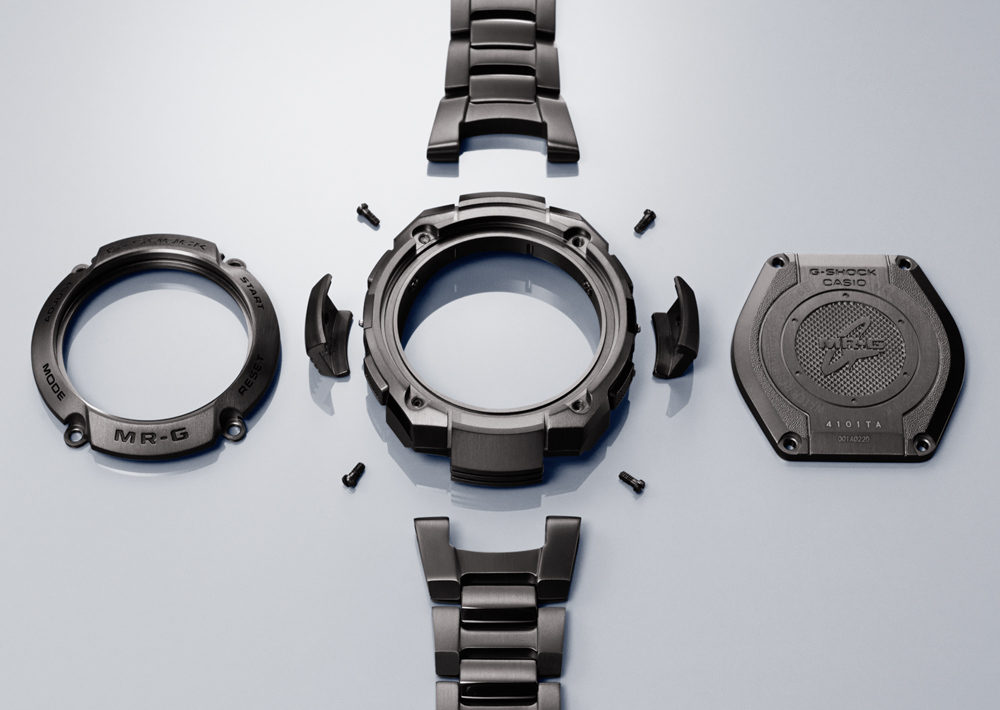 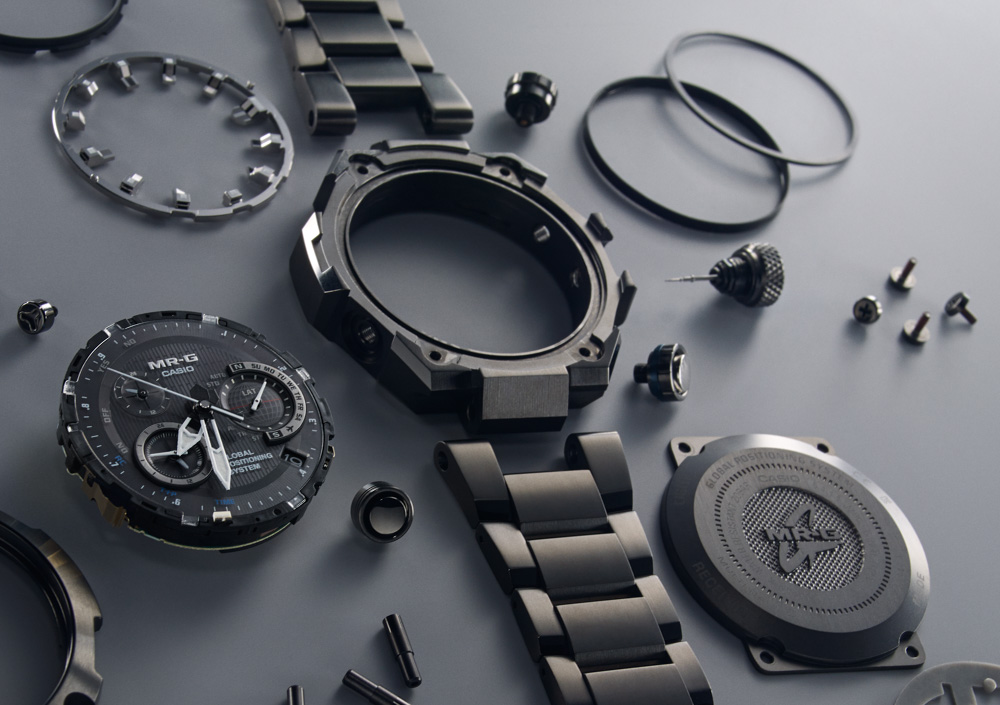 It is difficult to pinpoint the exact type of person that the MR-G is meant for. These are people who want the best-built G-Shock, but who also are willing to accept that other Casio watches have some additional features. Thus, there is no “one G-Shock to rule them all,” even if Mr. G watches to be that. I personally love the comfort, love the engineering story, but actually miss a lot of the functionality that comes with a purely digital G-Shock. Early MR-G watches were all-digital, and then the brand shifted to ana-digi dials for MR-G, and now to all-analog. Again, it isn’t as though one type of dial is better or worse, they just each have value. 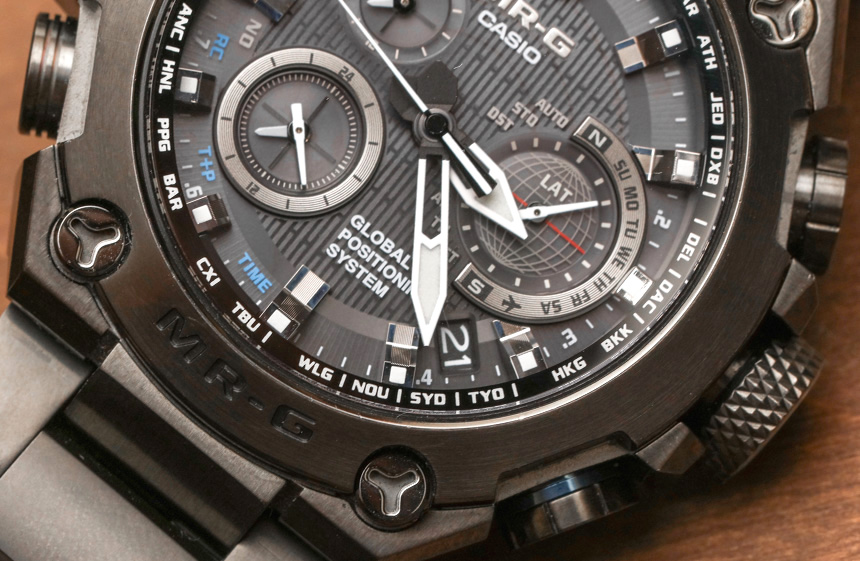 Perhaps the ultimate goal for a Casio G-Shock MR-G watch is to have a dial that somehow transforms or perfectly vacillates between a reasonably elegant all-analog dial to a super functional digital dial when functions like the chronograph are used. That would be a technological feat, but it would help embody the beauty necessary to make a high-end and clearly well-made product like the MR-G to more audiences. The good news is that Casio clearly has no end in sight for MR-G watches, and I can’t wait to see what they come out with next. 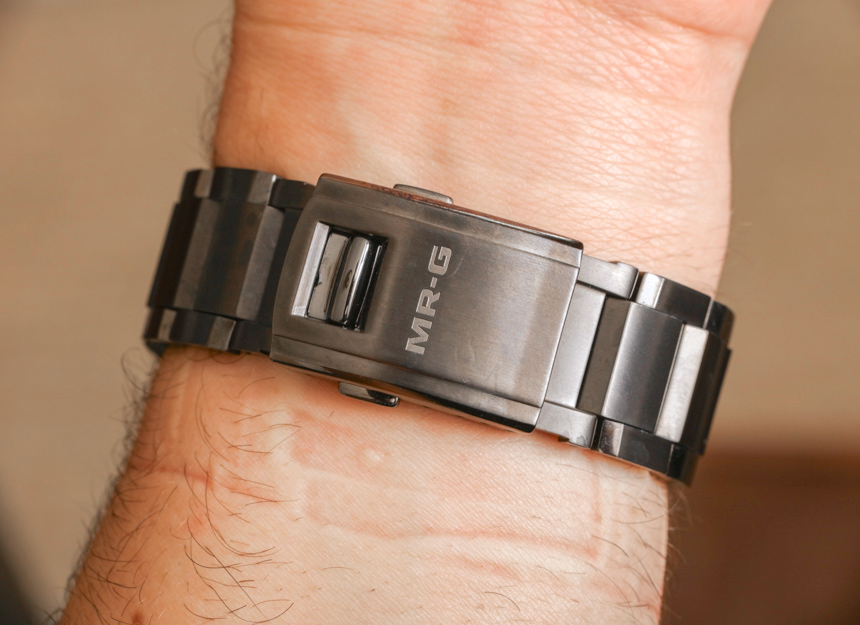 For now, this pinnacle of G-Shock watch technology in hard metal form is a unique testament to the merged worlds of appreciation of meticulously engineered tools and durable timepieces. Niche by design, the appeal of the message is nevertheless universal – and it takes fully understanding both the story of Casio G-Shock and that of MR-G to fully invest your heart into a watch like the Casio G-Shock MR-G MRGG1000B.

So what would the teenager in me say? I think he would like the watch a lot, think it was cool as hell to wear, not particularly care who noticed it since it isn’t a watch for showing off aside from to people who would notice it anyways, and sadly not have the extra funds to get one (yet). That would be for when he was all grown up. Price for the Casio G-Shock MR-G MRGG1000B (MRGG1000B-1A) is $3,000. gshock.com

Necessary Data
>Brand: Casio
>Model: G-Shock MR-G MRGG1000-1A
>Price: US$3,000
>Size: 49.8mm wide
>Would reviewer personally wear it: Yes.
>Friend we’d recommend it to first: Dedicated tool watch lovers who grew up with G-Shock and Casio, ready to put down money for the best the company can engineer.
>Best characteristic of watch: Perhaps the most intensely engineered tool watch in the world. Despite large size, case is very comfortable to wear. Does manage to feel a lot more “adult” than most other G-Shock watches out there. Excellent fit and finishing.
>Worst characteristic of watch: All-analog G-Shock dials are attractive but the lack of screens inherently limits the efficiency of using certain features. Hands and hour makers could have better lume (but the dial does have a back light), Casio doesn’t always best explain the value proposition of these highly-engineered cases.