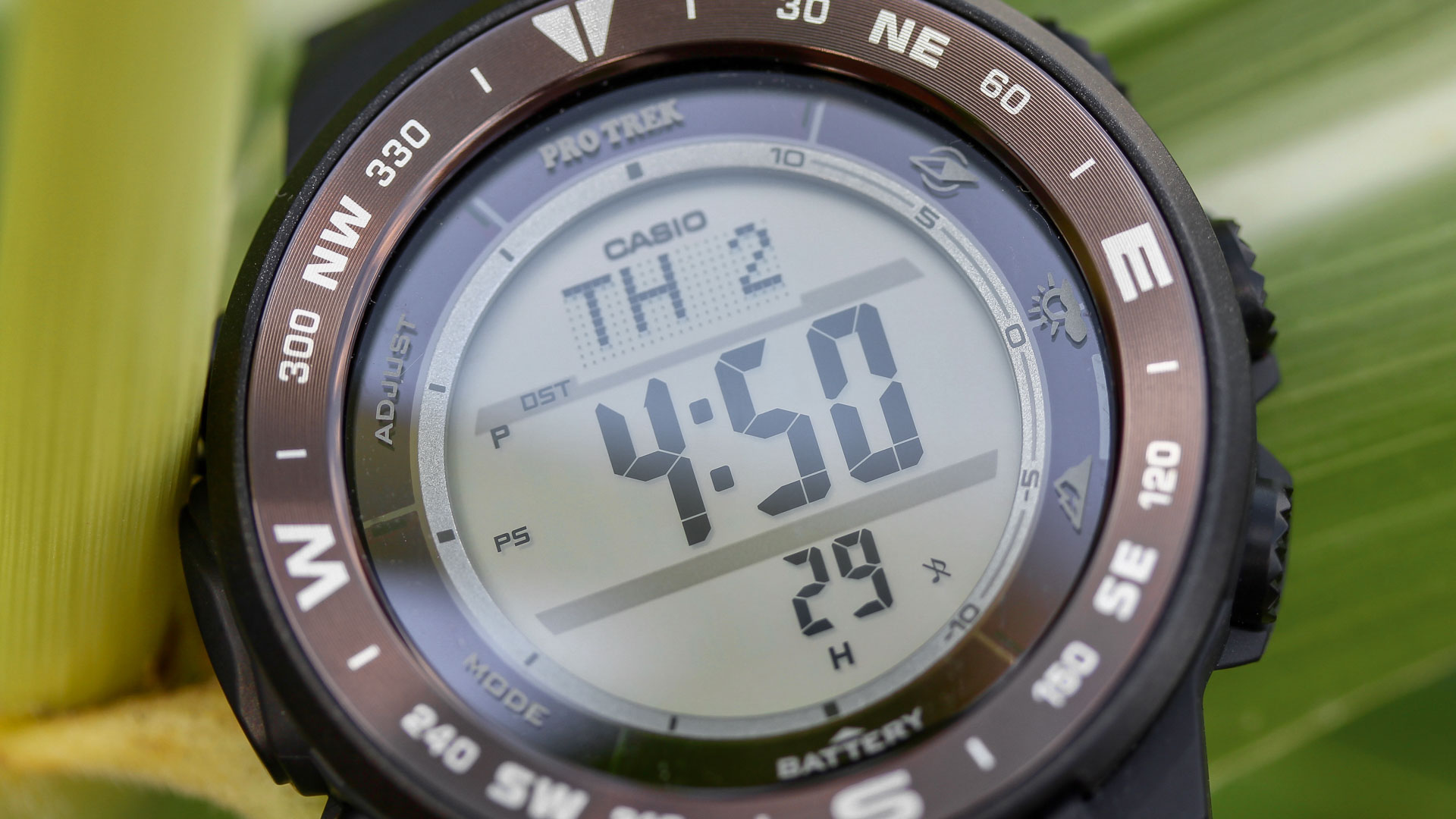 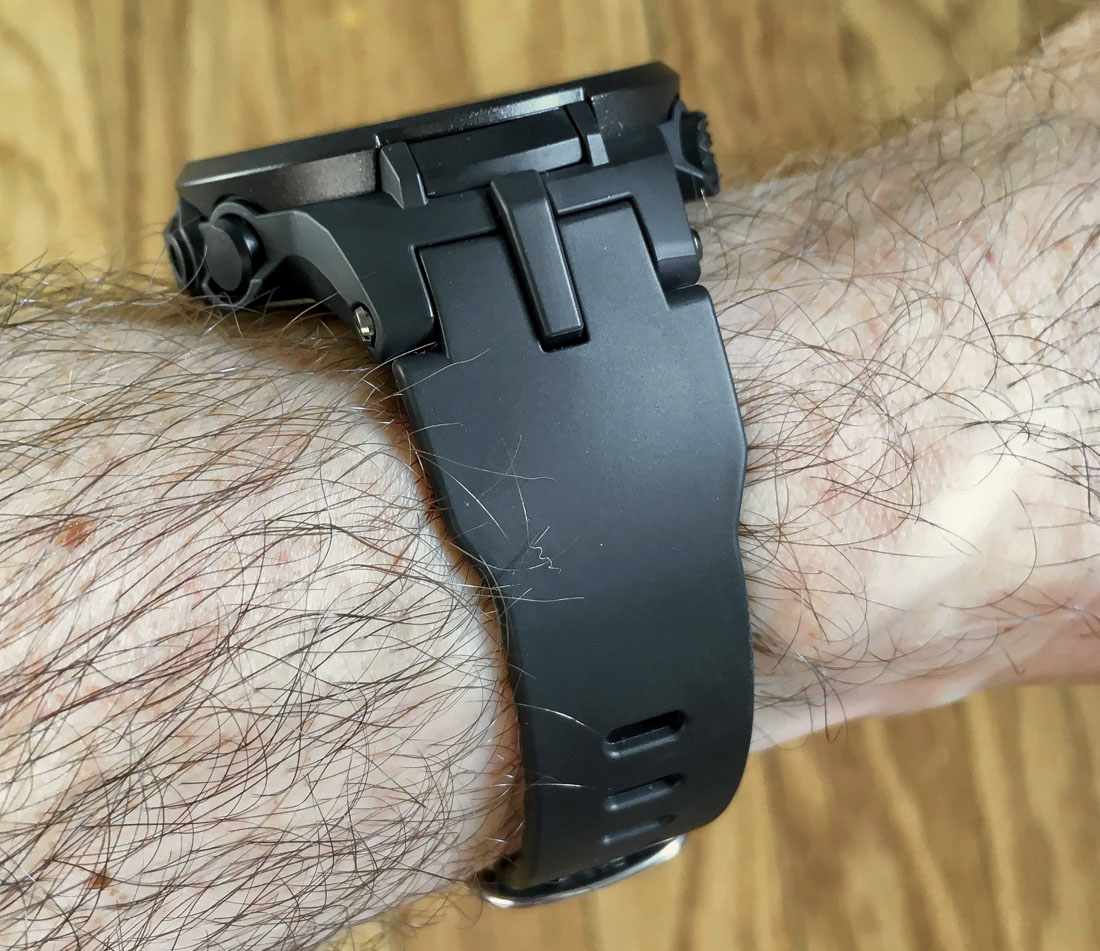 Then again, all the functionality in the world won’t amount to a hill of beans if it’s not comfortable to wear and easy to use. Fortunately, the Casio ProTrek PRG330 is quite comfortable. This is in no small part due to the lighter weight of the watch (56g), its overall compact dimensions (47mm sensor to pusher; 12.5mm thick; 52.3mm lug to lug), and the strap. Now, resin straps may not get much love or attention, but when it comes to an outdoors watch, they make sense. They’re light, they’re strong, and they don’t pick up lint and dirt like a silicone or rubber strap might. Casio has also included something that I’ve been seeing on more of their watches as of late – small, curved pieces that are under the strap at the lugs. This helps first to curve the strap a bit. Secondly, it fills in the gap you might otherwise have between your wrist and the case, making for an overall better fit. So, when it comes to comfort, the Casio ProTrek PRG330 has that down. 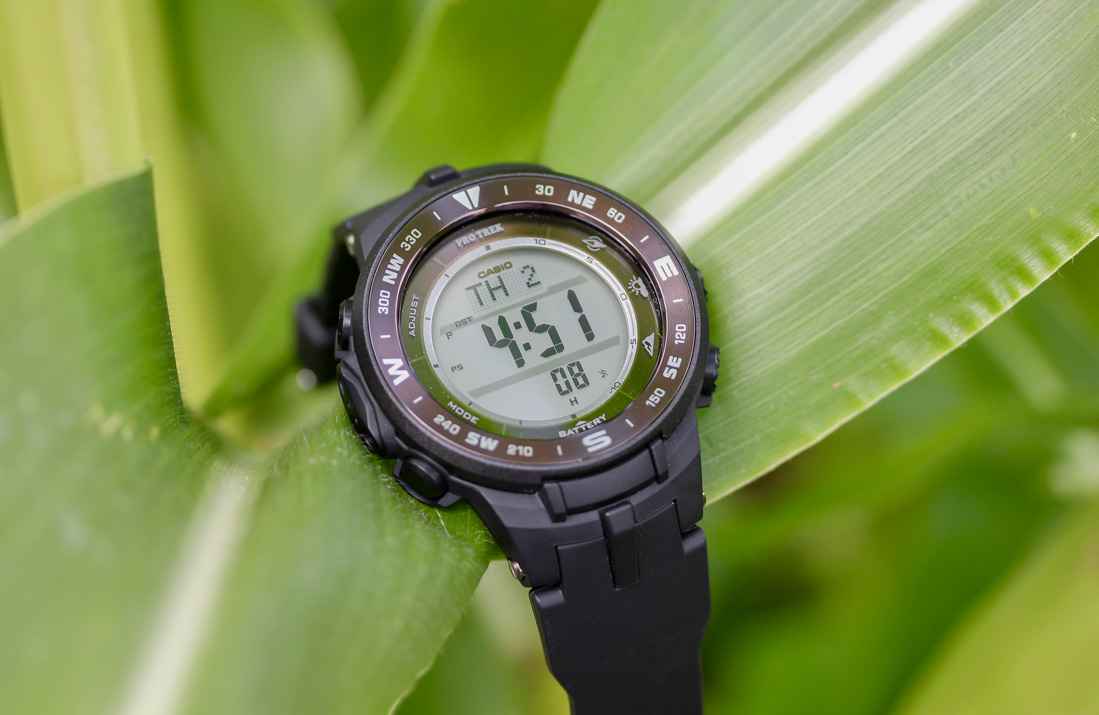 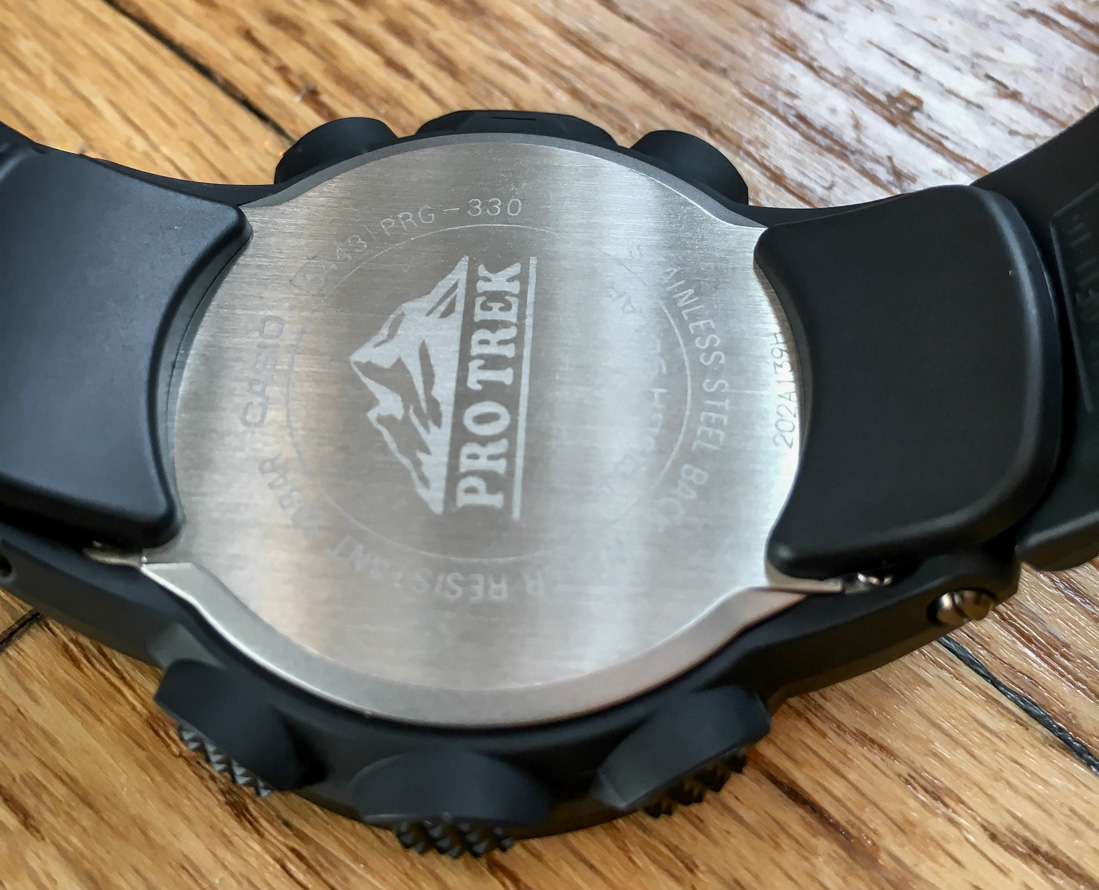 What about usability? Sometimes, when a digital watch shoves a ton of functionality in, it can be fairly complex to remember how to use all of it. No such problems with the Casio ProTrek PRG330. For most of the major functionality, you’ve got the icons labeling the buttons, which I noted a bit earlier. In regular timekeeping mode, you can use the ‘Adjust’ pusher to cycle the top display between a barometric line chart and two different day/date displays. Using the mode button jumps you through sunset/sunrise times, max barometric pressure, a stopwatch, countdown timer, alarm, and world time. Clean and easy. Even adjusting the auto-on capability of the backlight (i.e. whether it does it or not) is easy enough – press and hold the backlight button. A small ‘LT’ will appear in the lower display when auto-on is enabled, and go away when it’s not. It’s a shame the backlight is made of LEDs rather than an EL subsurface, but it still gets the job done. 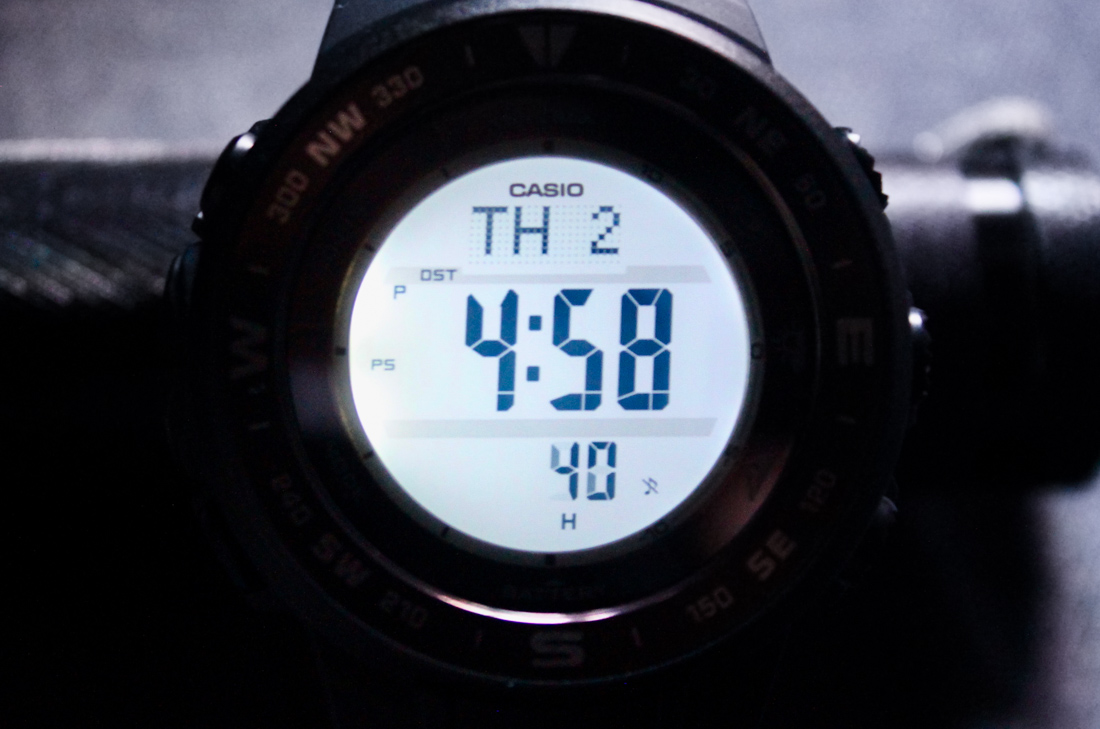 With the auto-on, the Casio ProTrek PRG330 exhibits some further smarts as well. Basically, if it’s bright out (be it the sun or lighting in the room you’re in) it knows to not turn itself on. This sort of wizardry makes sense, given that the Casio ProTrek PRG330 is solar-powered. As the watch goes, it wants to maximize the battery, so it’s smart about it, such as with the backlight, or with turning the display off, as I mentioned earlier. I’m definitely a fan of solar powered watches, and including it in something so outdoors-oriented makes sense.

Some may wonder why there is no sort of fitness tracking included on the Casio ProTrek PRG330, given that you’ll be active with it outside. I’ve no mole in the Casio skunkworks, but I’ve got my theories. First up, it’s powering it all with solar power and you’re trying to conserve your battery. Adding in a fitness tracker and attendant Bluetooth radio is going to suck power (not to mention if you tried adding in a HR sensor). More importantly, though, would be size considerations. There is already a lot of technology coming in via the Triple Sensor movement in the watch. You start adding in another sensor and radio, and you need a bigger watch. Perhaps a larger ProTrek could handle it, but remember – the Casio ProTrek PRG330 is intended to be a more compact member of that family. 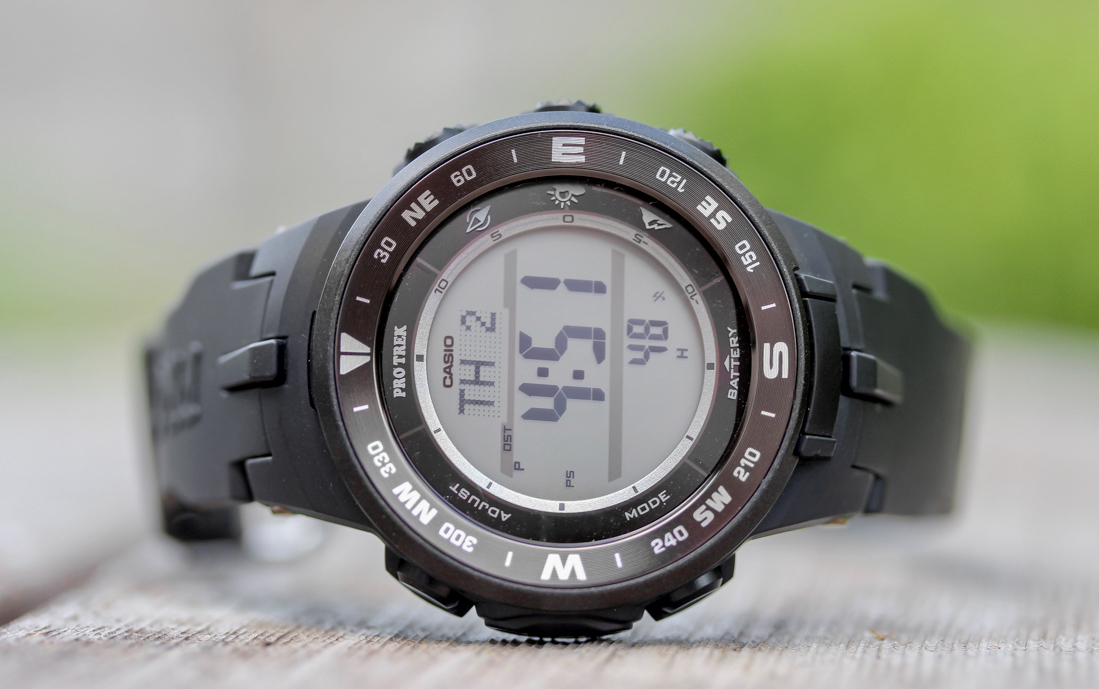 Coming in with a price of just $200 USD, I think the Casio ProTrek PRG330 is a solid addition to their lineup, and a great candidate for your next outdoor adventure. I took it with me on a camping trip, and found it worked for all manner of activities – even watching the barometer drop as a rain storm was coming in. Some may prefer the larger, bolder cases of the ProTreks that came before, but I think I’ve quickly become a fan of this newest, smallest member of the ProTrek family. protrek.casio.com

Necessary Data
>Brand: Casio
>Model: ProTrek PRG330
>Price: $200
>Size: 47mm sensor to pusher, 12.5mm thick, 52.3mm lug to lug
>Would reviewer personally wear it: Indeed – this is a solid choice for camping.
>Friend we’d recommend it to first: This is perfect for the outdoorsy person who wants a watch that doesn’t scream “Take me to the mountains” when they’re at the office.
>Worst characteristic of watch: The LED backlighting.
>Best characteristic of watch: How much capability is baked into the compact case.